This week’s Apps Uncovered takes images that somehow utilize architecture in the image as its theme. With some images, architecture is clearly the subject, in others, such as the lead photograph that conveys the awe and mystery of the Christmas season, it is a supporting element. The wide variety of imagery posted this week makes for rich collection of top-notch images, across the spectrum of genres. Images by the extremely talented Erika Brothers bookmarks this week’s selection – both speak brilliantly to the holiday spirit of those who enjoy Christmas and Hannukah.

Other images are much more directly evocative of architecture – these include artwork by Lynette Jackson (a contributor to our book The Art of iPhone Photography), Veevs, borisbschultz2009, james green, william deegan, Paolo Ricciotti Wayne Greer (renowned for his compelling landscapes) and Gianluca Ricoveri. Others use architecture as a backdrop or compositional element – these include fantastically surreal images like those from Erika Brothers and book veteran David Ingraham, and artful street captures by Lee Atwell, book contributor Shel Serkin, Julia Nathanson, and the much feted Brendan Ó Sé. 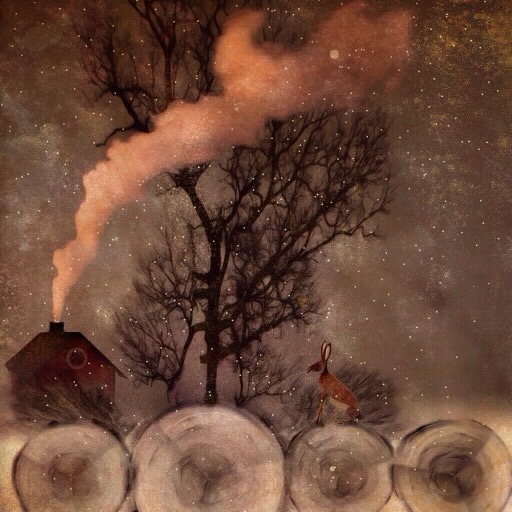 Backstory: I wanted to create something to reflect the Christmas season; something for the viewer of an overall blessed feeling and well being on Christmas Eve. To build my image I always I start in Superimpose then I use Icolorama to raise the effect for highlights on the image, and Coherence to give a finishing touch for a painterly effect, adding of snow I use Color Lake and finally to give more texture to the image I used Grunge. 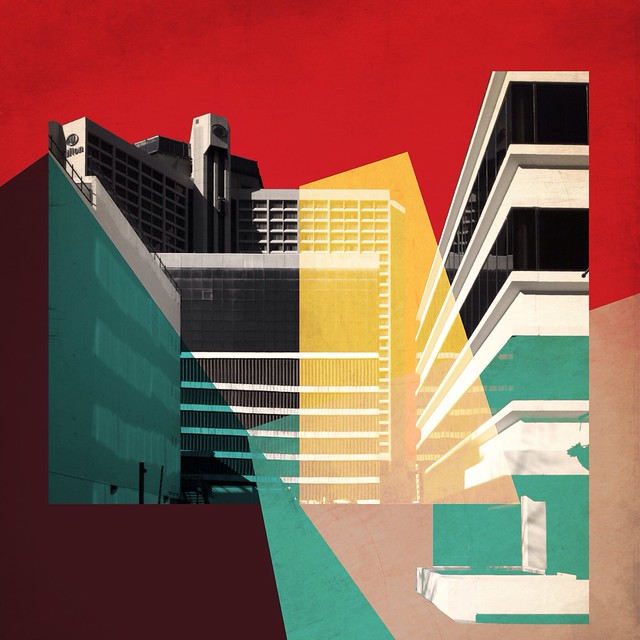 Backstory: Over a year ago I made this shot quickly as horns sounded for me to move along. I didn’t have any specific plans for the image, so I put it aside. Recently I examined the image and questioned my attraction which prompted me to highlight details and patterns by placing layers of colors. I create color shapes in iDesign and Union for masking & blending.

Backstory: This is the breathtaking Great Court of the British Museum. As you walk into it it takes your breath away. As it was a sunny day it was perfect to go take photos and capture the blue sky through the curved, crisscross-patterned glass roof of the Great Court. I took the photo using the fisheye Olloclip and VividHDR. I wanted a dreamy look to the photo so used a preset in StackablesApp.

Backstory: I was inspired to take a photo of this particular man as he was very tall and towered above many of the pedestrians around him while standing at a crosswalk. My intention was to catch the feeling of the height of the man amongst the towering city high-rises. It wasn’t until I downloaded the photo onto my computer that I was surprised to see the ‘Help’ sign in the distance.

I use a IPhone 5S and when taking photos in the city I often use the Hipstamatic / Oggl app as I like the ability to change the lens and filter after the photo has been taken as the light conditions on the street can change so quickly. I used the Hornbecker Lens which highlighted the foreground details in the man’s face and D-Type Plate for the vintage feel. 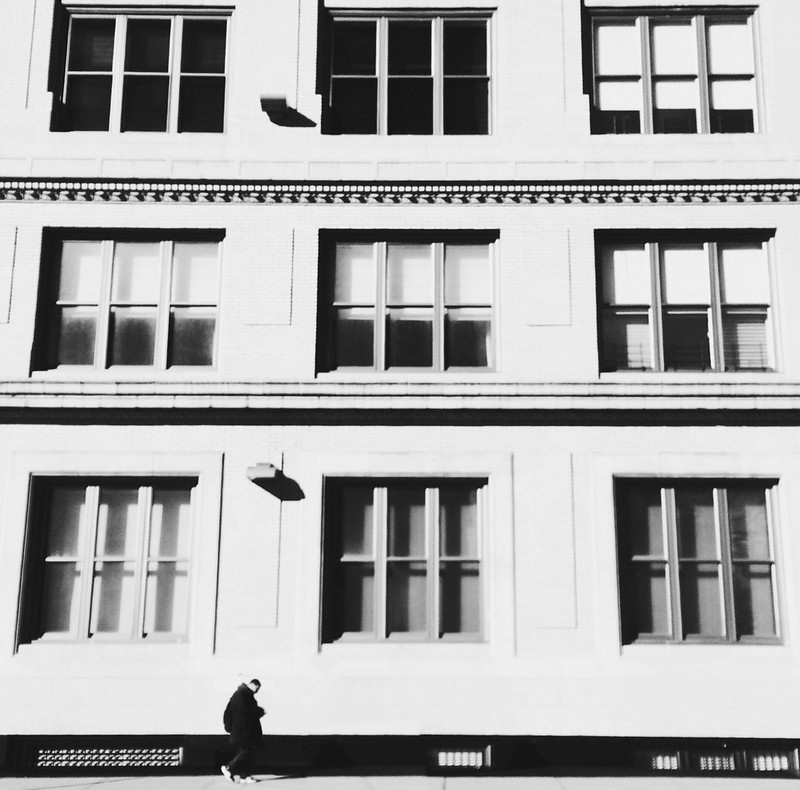 Backstory: I shot this from a moving car with oggl, using the Lowy lens and BlacKeys Extra Fine film. I then polished it up with Juxtaposer, Filterstorm and SKRWT (a new favorite app), working to highlight the sense of scale. 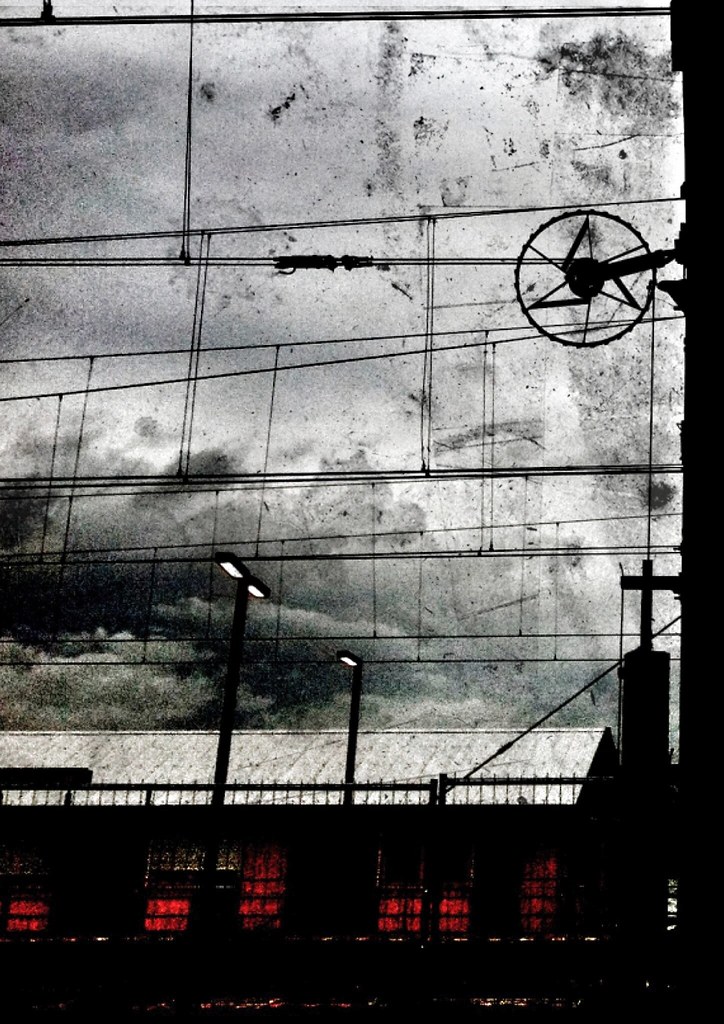 View from the train by borisbschulz2009

Backstory: I took this picture from a train when it left the Amsterdam Central station. It’s been a long time ago. I think I used Snapseed, Colorsplash and Phoster to proceed it. 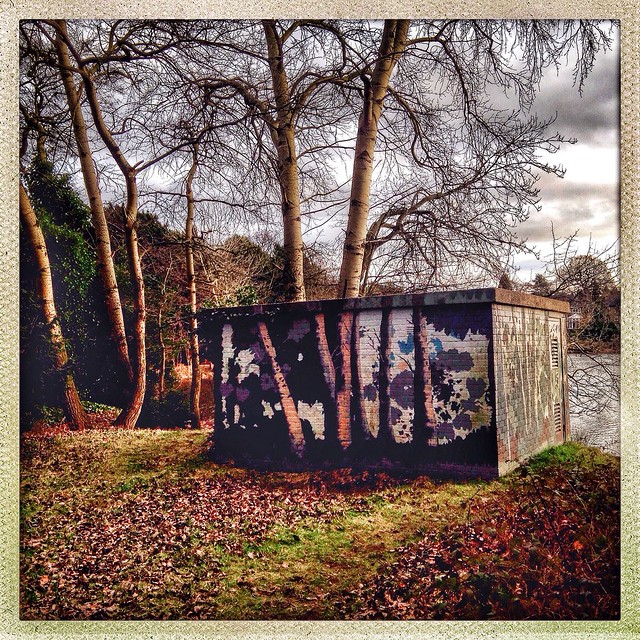 Backstory: This image was taken for my 365 project I’ve been doing this year, it was taken on a walk around a local park of a building I had never really noticed before and I found it interesting as they had made an effort to camouflage it. I was using Hipstamatic with the Lowy lens and Ina’s 1982 film it was then edited in Snapseed. 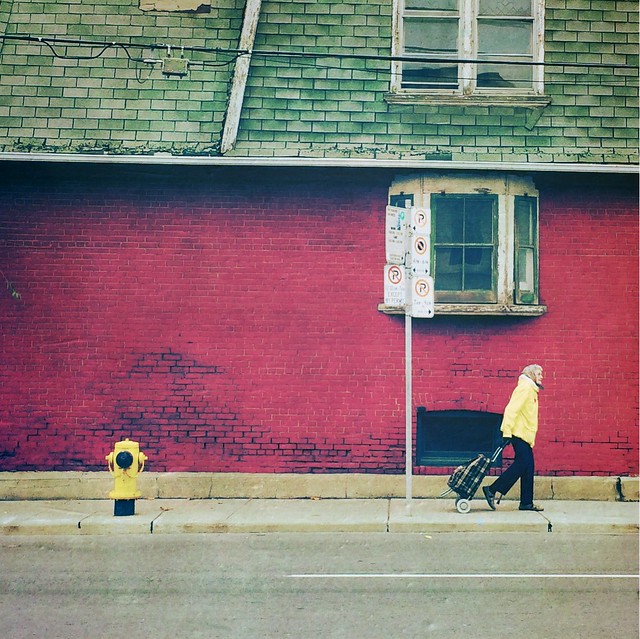 red and yellow by Julia Nathanson

Backstory: Shot and edited with Oggl (Lincoln lens/Blanko 1 film) Colour combinations like this are irresistible to me.

Backstory: The final image is a composite of two iPhone 5s images that I took in 2014. The base, or context, is the view from our office window across the industrial park/airport. The camera was glitching at the low light level and kept going out of focus, resulting in an anonymous viewpoint. The object inserted into the is context is a shot of concrete jersey barriers stacked at a factory.

The image is part of my Imaginary architecture series, a study of creating architectural sketches with mobile technologies. The image was created using AfterImage, Mextures, ImageBlender and Union Apps. The object was created using many layers and built up time after time, in order to keep the resolution of the object for the final composite it’s important to export it from SquareReady during the initial layers. A second layer of the context was used to blend the object to the context, giving it the feeling of emerging from the land, this was done in Union. 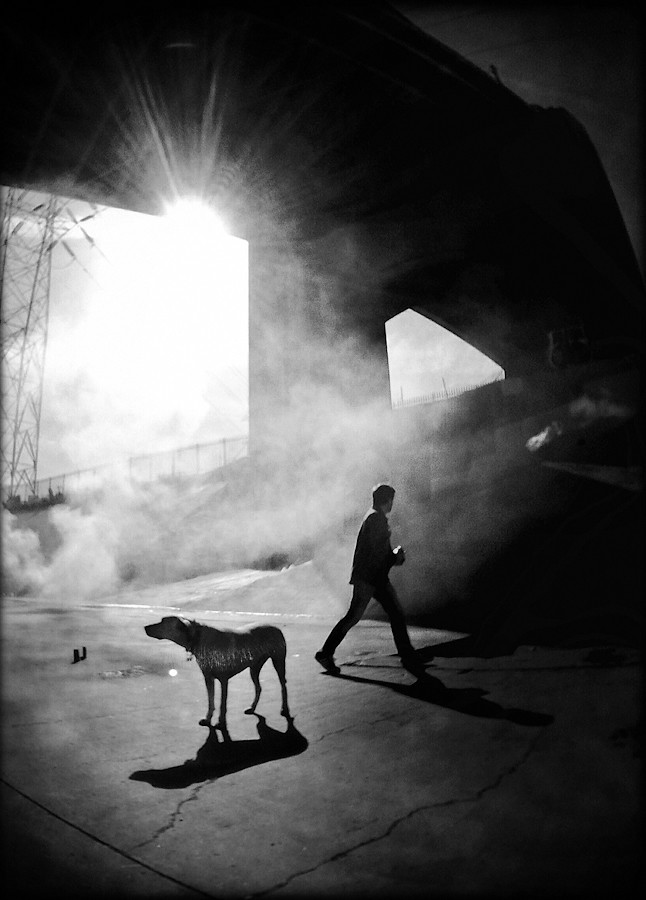 In an LA Mood by David Ingraham

Backstory: I shot this image with my iPhone 4S, using Hipstamatic and then Snapseed for some cropping and minor tonal adjustments.

This was taken at the LA river by the legendary 6th Street Bridge during a Sunday-afternoon photo-walk with some fellow photographers.This is a very popular location, being the site of countless movie scenes, music videos, commercials, etc., so there is almost always something going on there. But this was an unusually busy day, with lots of photo shoots taking place. As I came out through the tunnel running under the bridge, someone had lit a smoke bomb of sorts in an attempt to create some atmosphere for whatever they were shooting.

I decided to take advantage of the free instant mood they’d provided and grabbed a few quick shots myself.There was a lot more going on in the original version of this image but I found these two elements — the dog and the man — to be the strongest and decided to crop out the rest. It ended up being one of my favorite images of 2014. 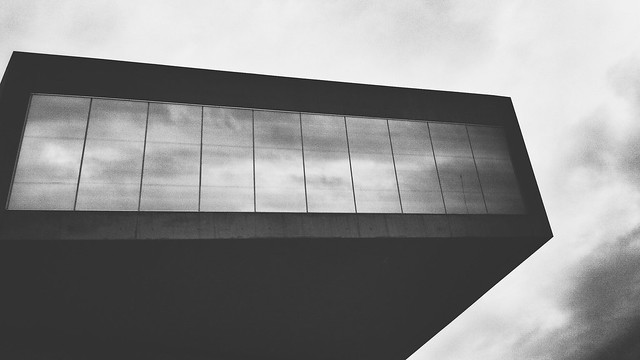 Apps used: Shot and edited on iPhone – Processed with VSCOcam with x1 preset

Backstory: I took the shot in the Nyboder suburb of Copenhagen. There you will find rows and rows of these orange-coloured houses which were originally a naval barracks. The orange of the houses gives a lovely background colour to frame the bike, bench and the overhanging tree. The famous little mermaid statue is a stone’s throw from here. I used Snapseed to do a little work on the contrast. 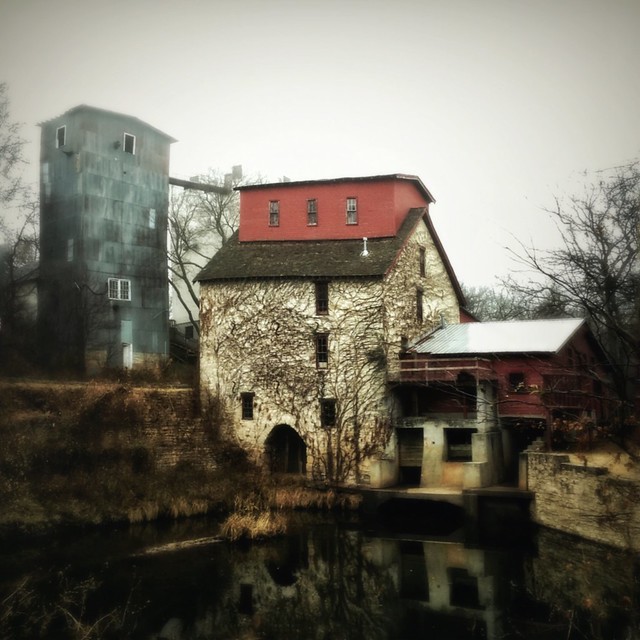 Backstory: This is an old mill near the Arkansas River in Oxford Kansas (built in 1874). I have intended to shoot it for a while, but was waiting for the right time. Finally on a foggy morning I drove down and got this and some other shots. I used Handy photo to crop out some distracting tree branches ect… I also used the “glow” filter. I also used Snapseed for all the basic adjustments such as brightness, saturation and contrast. I then went to Photo Toaster to use its lighting brush. Then to mextures to add to the mood. One challenge I had was perspective distortion. To deal with this I went to icolororama. It has a warp feature that if used carefully can straighten out buildings or other things that are leaning this way and that.

Backstory: The photo was taken using the app 6×6 in a villa near Lucca, Tuscany then was imported into the app TinType to achieve the final effect. 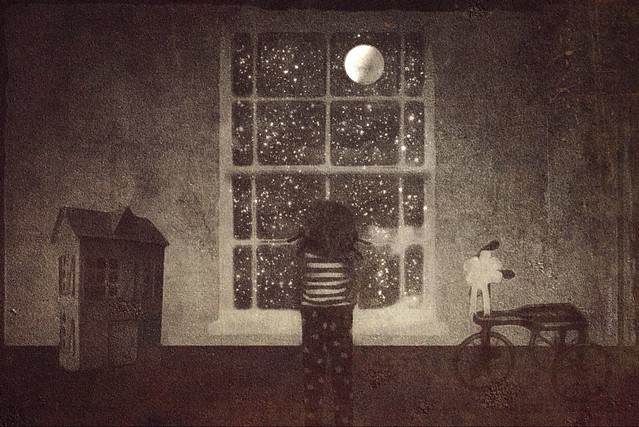 I Believe by Erika Brothers

Backstory: This image as the title says “I believe” reflects all the illusions of a child awaiting to receive their Christmas presents. To believe in something that is not physical but fills us with great illusion every year at this time. The collage is composed in Superimpose, effect of the stars in the windows I used Repix and Allien Sky for the moon, and finally to give the finished painterly and texture Brushstroke I used Grunge.