Welcome to this week’s Apps Uncovered where we feature a range of iPhoneography talent and reveal the creativity and techniques behind each of the iPhone images featured. I do believe I’m getting the hang of this!

Thank you all for contributing your wonderful images and we look forward to discovering the stories and techniques behind them. If you have any questions regarding this feature, please email Trish at patriciannelizabeth@gmail.com 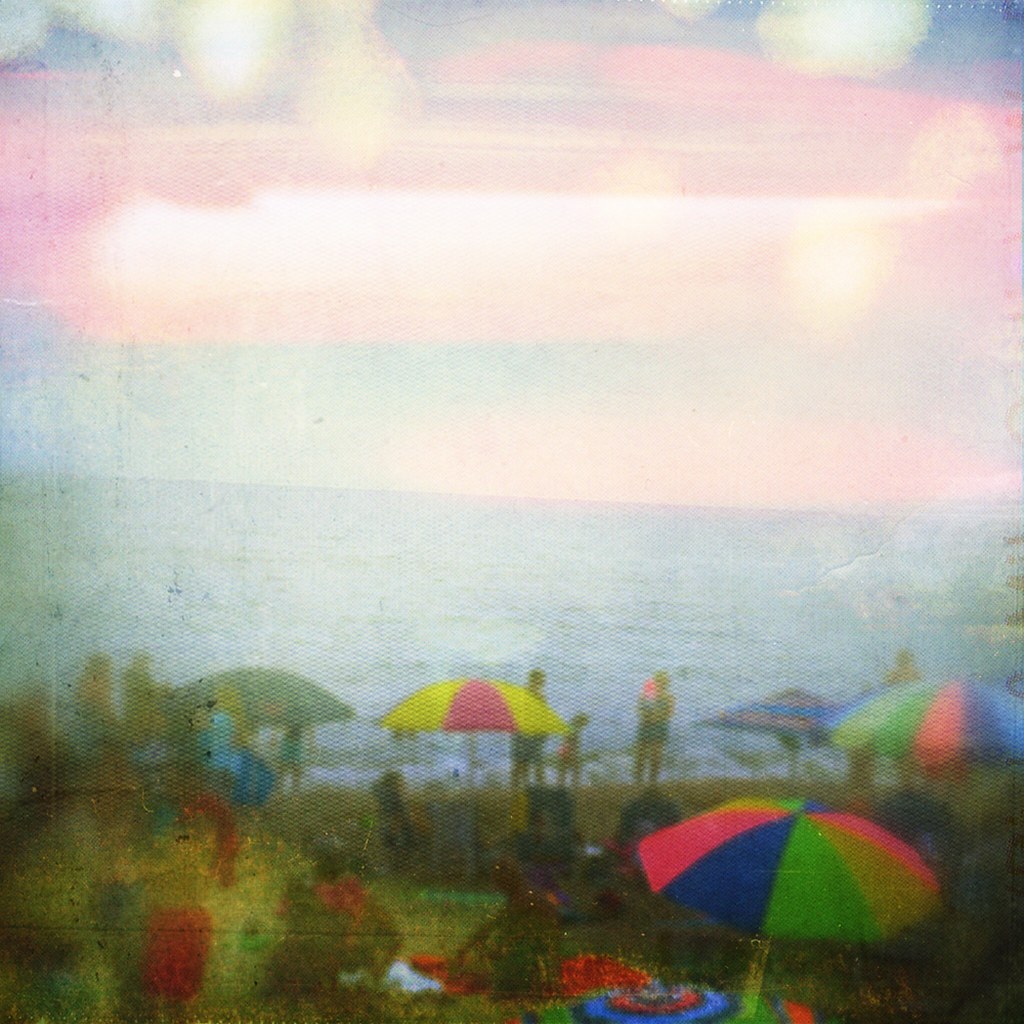 Apps used: Tadaa, Afterlight, and Mextures on iPhone This was taken at Cape Henelopen State Park in Lewis, Delaware. I sometimes ride up to this beach for a different change of pace, and it’s great for photos because it’s got good overhead piers and lookouts with many types of views. This day was particularly crowded even though being slightly overcast. I heavily blurred out the image using Tadaa and washed out the color using Mextures. I further overlaid some effect with Afterlight, which by this time the photo looked totally different than my memory served but after much trial and error, I was happy with it. 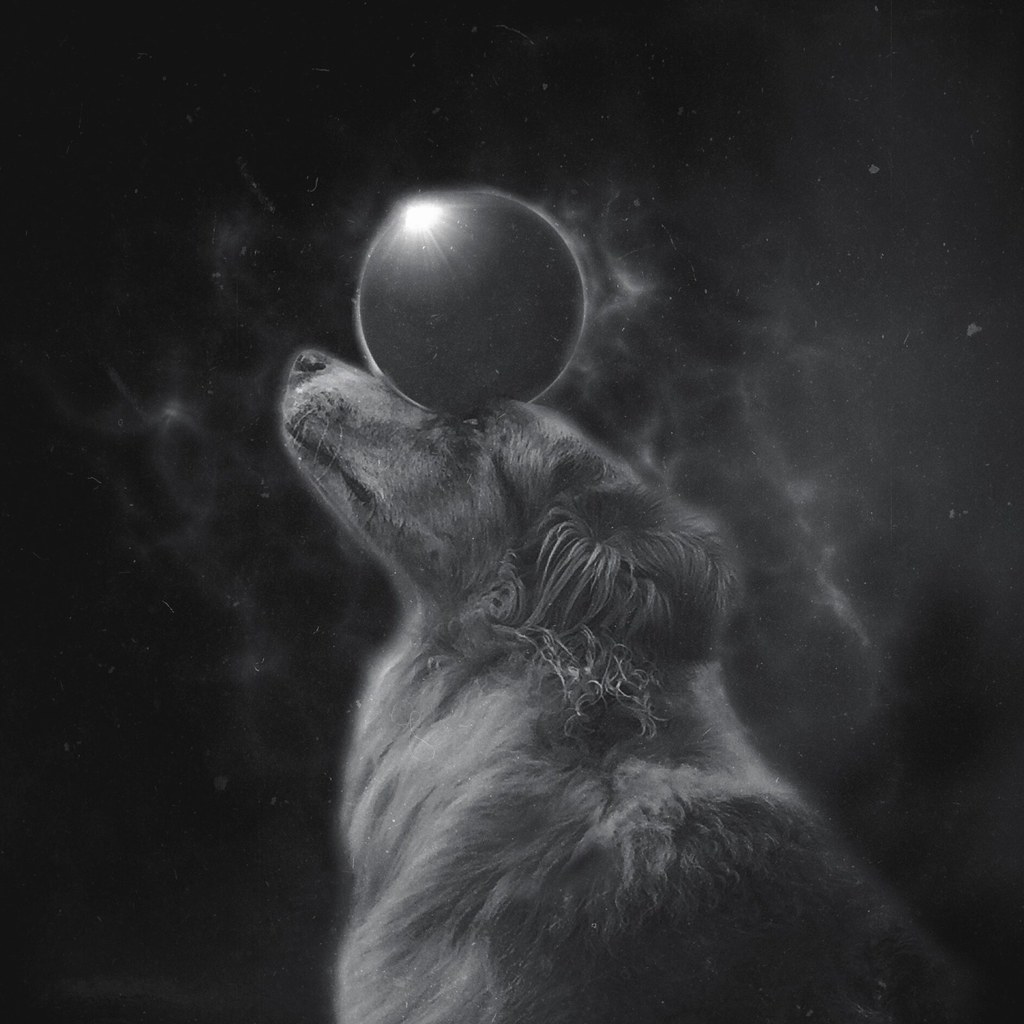 Apps used: iColorama and Mextures
Backstory: I wanted to do a special commemorative apped photo of my super K9 model, Briar-Rose, for the Great American Eclipse event of 2017. I didn’t have much time to create and post a photo before the event, which was August 21st. Instead of posing and photographing Briar-Rose, I grabbed a recent photo of her balancing a ball on her nose. Working in the app iColorama, I cropped in pretty tight and changed the frame to a square. I imported an image of a total eclipse of the sun and placed it over the ball. I changed the background using a texture and masking tools from icolorama presets. Then I went into the app Mextures to change the color to black and white as an interpretation of totality, and added a little speckled noise to capture a feeling of that which is only seen, or felt, during a total eclipse of the Sun. The finished image reminded me of an ancient mythos of a dog that ate the sun, here she is simply playing tricks with it.

The earth may ride on the back of a turtle, but the sun rests on the nose of a dog. Briar-Rose poses as Tiangou, the heavenly dog that eats the sun. For a short time she holds the dark sun on her nose. 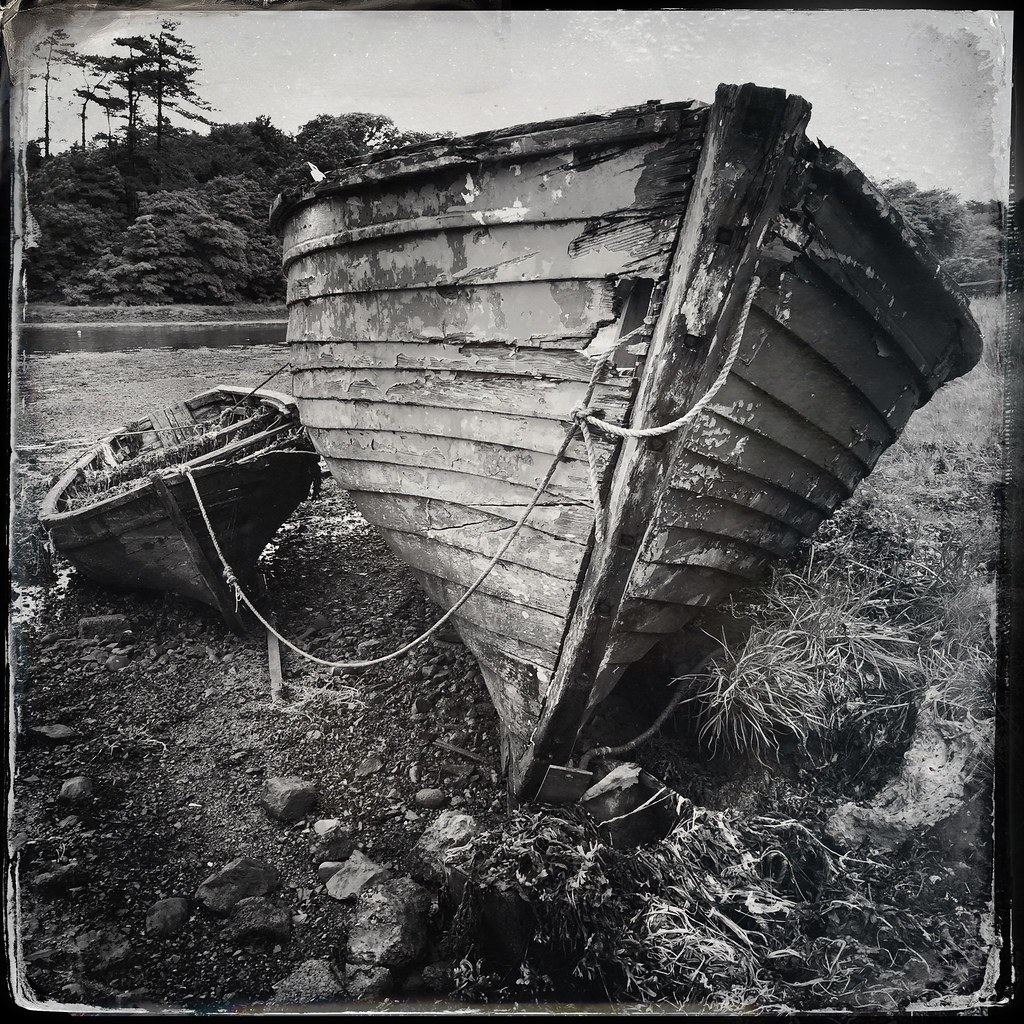 Apps used: The image was created with Hipstamatic and the Iphone 6. I used the John S Lens, D-Type Plate Film, and Triple Crown Flash – which has become my standard combination for black and white. There was no additional editing done. Backstory: I was attending a photography workshop in Western Ireland, “Spirit of Place: Ireland 2017” with Doug Beasley. This image was taken after lunch at Westport (Ireland) Quay on a rainy day and although I also created several images with my camera – the images I created with Hipstamatic were my favorites. 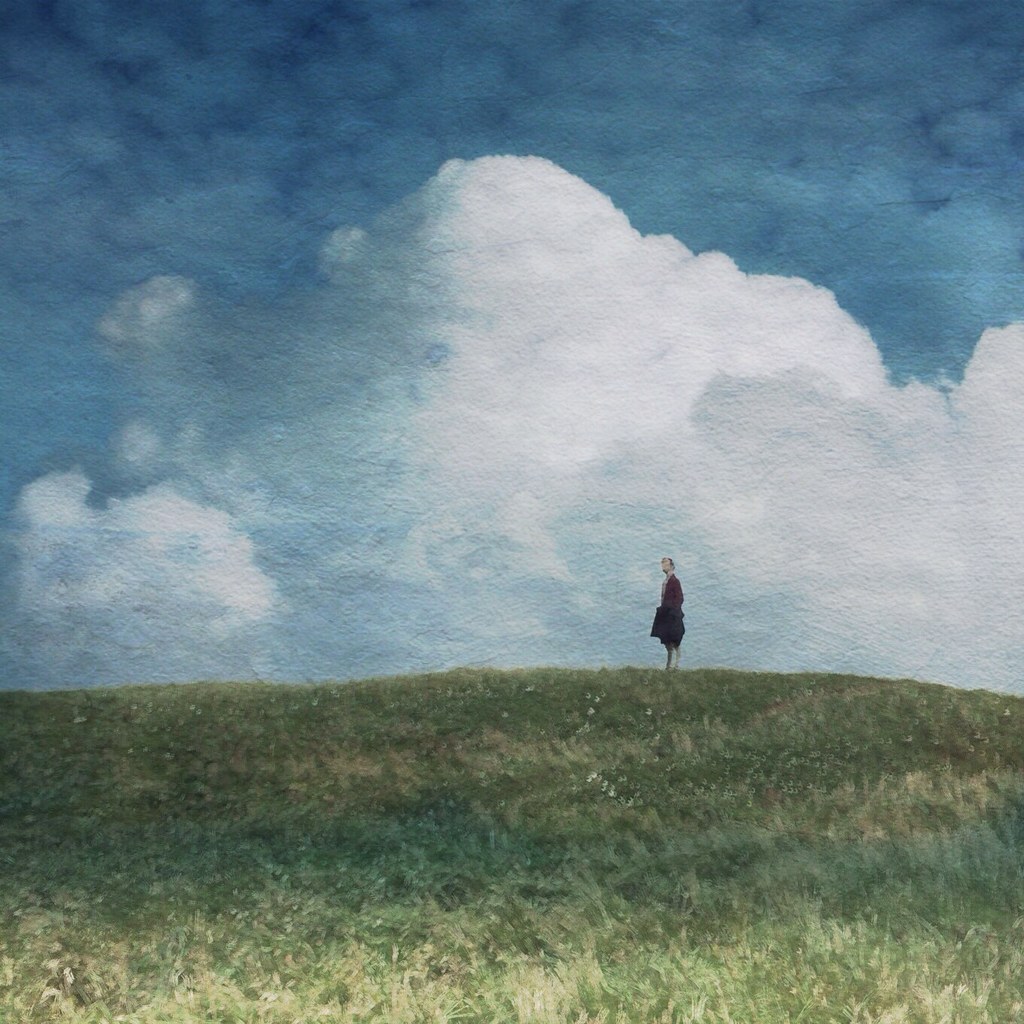 Apps used: Slow Shutter, iColorama, Distressed Fx, Stackables, Snapseed
Backstory: This summer I traveled in North Germany I have appreciated so much the Wadden sea and its Islands. Especially Heligoland where I have shot this photo. The contrasts and the colors are very particular in these islands I wanted to highlight them with a minimalistic photo. 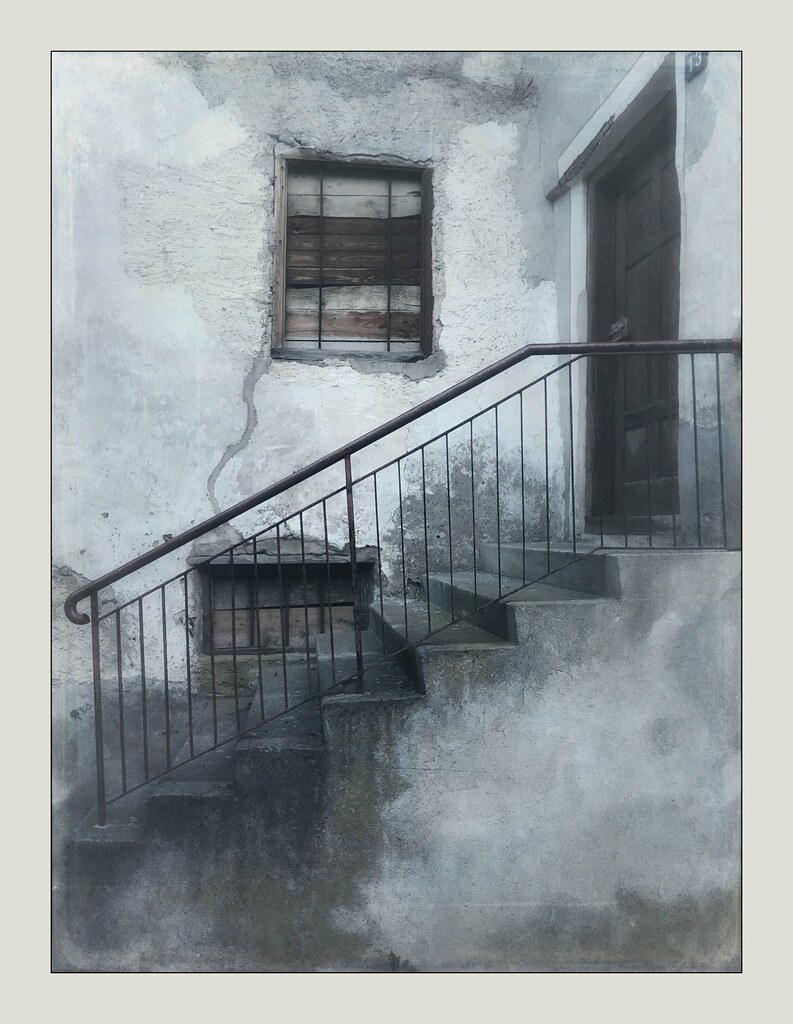 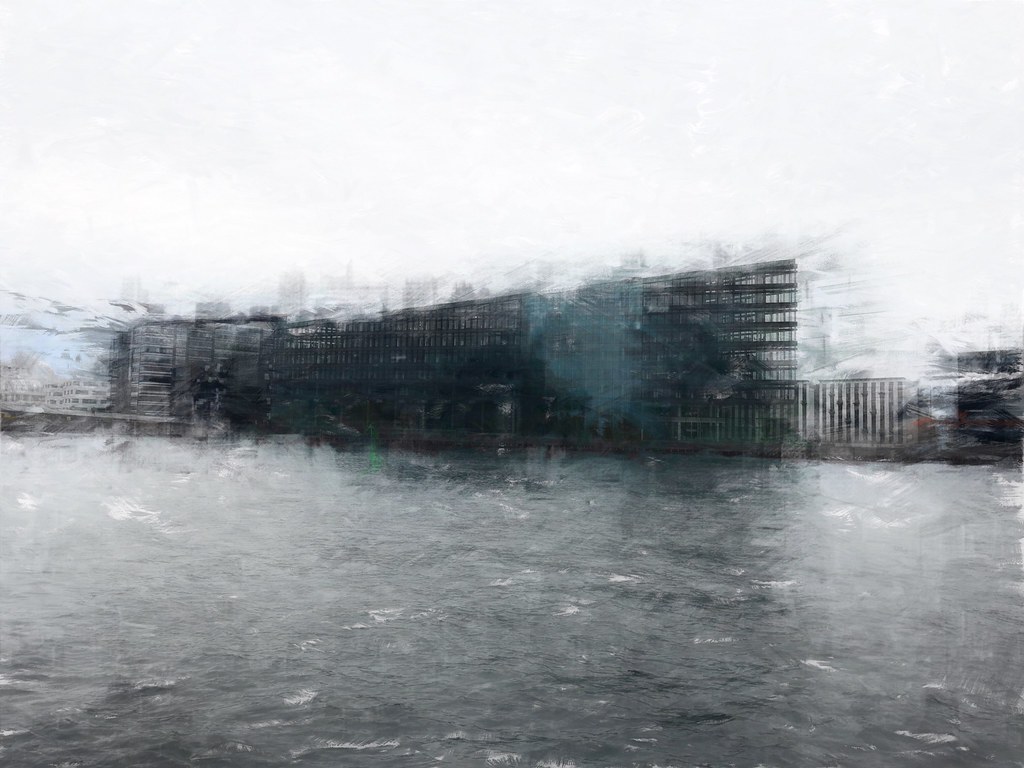 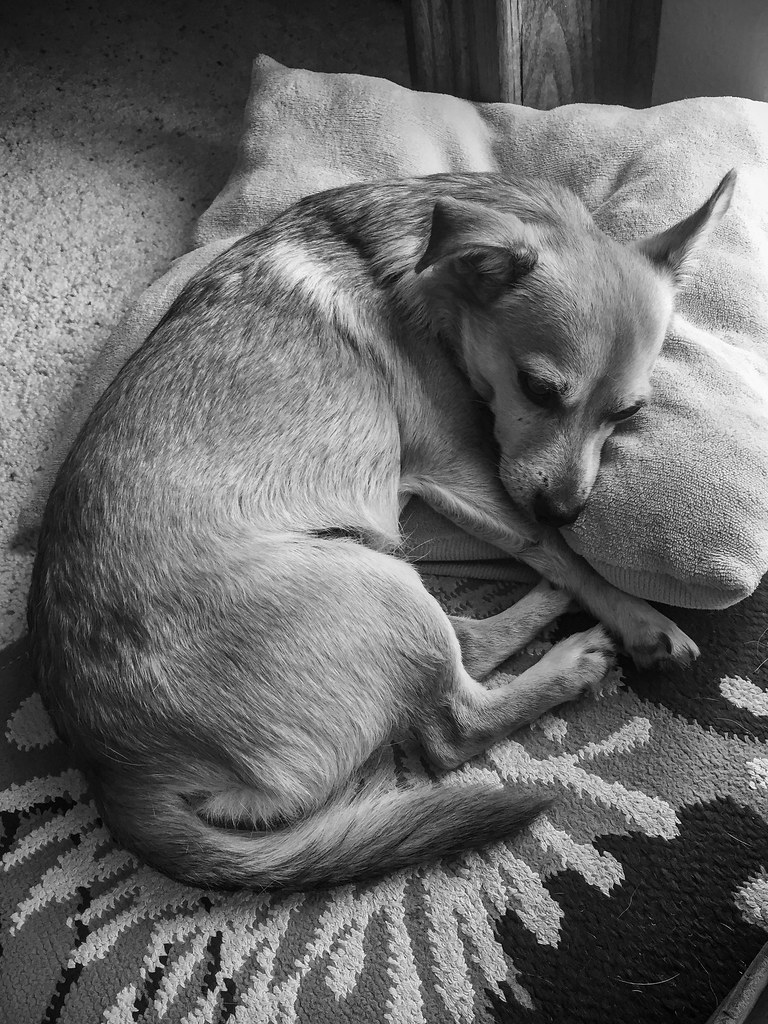 Apps used: I shot the photo on an iPhone 6 with Apple’s camera app and edited with Adobe Lightroom on an iMac. Backstory: One of my dog’s favorite places to nap is by the balcony door which was a perfect spot to get a shot of him with some nice natural light. I went back and forth about whether to use the original color or convert it to black and white but ultimately decided black and white fit the mood best. I only added some contrast, clarity, a little vignette and cropped it slightly. 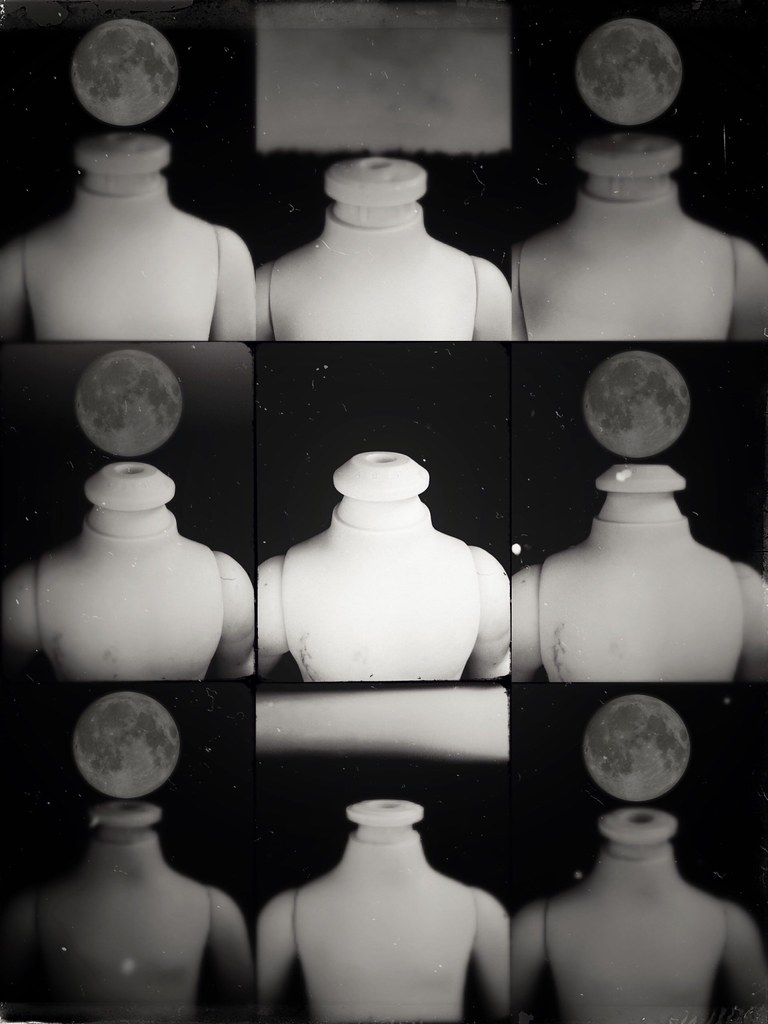 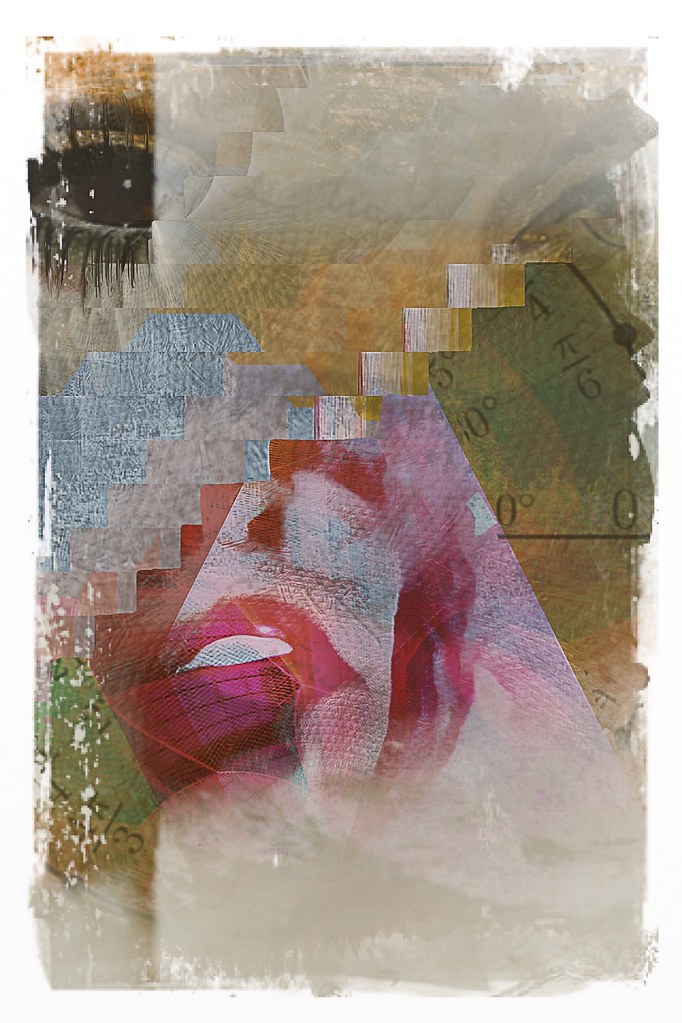 Apps used: decim8, fotomuse, roll world, art rage, and juxtaposer. Backstory: This image represents a love song about a couple who have been together for many years, and who will always be there for each other giving each other strength and the desire for betterment. Wendy Darling, from Peter Pan, shows that this life can be magical, despite the mundane of day to day life. 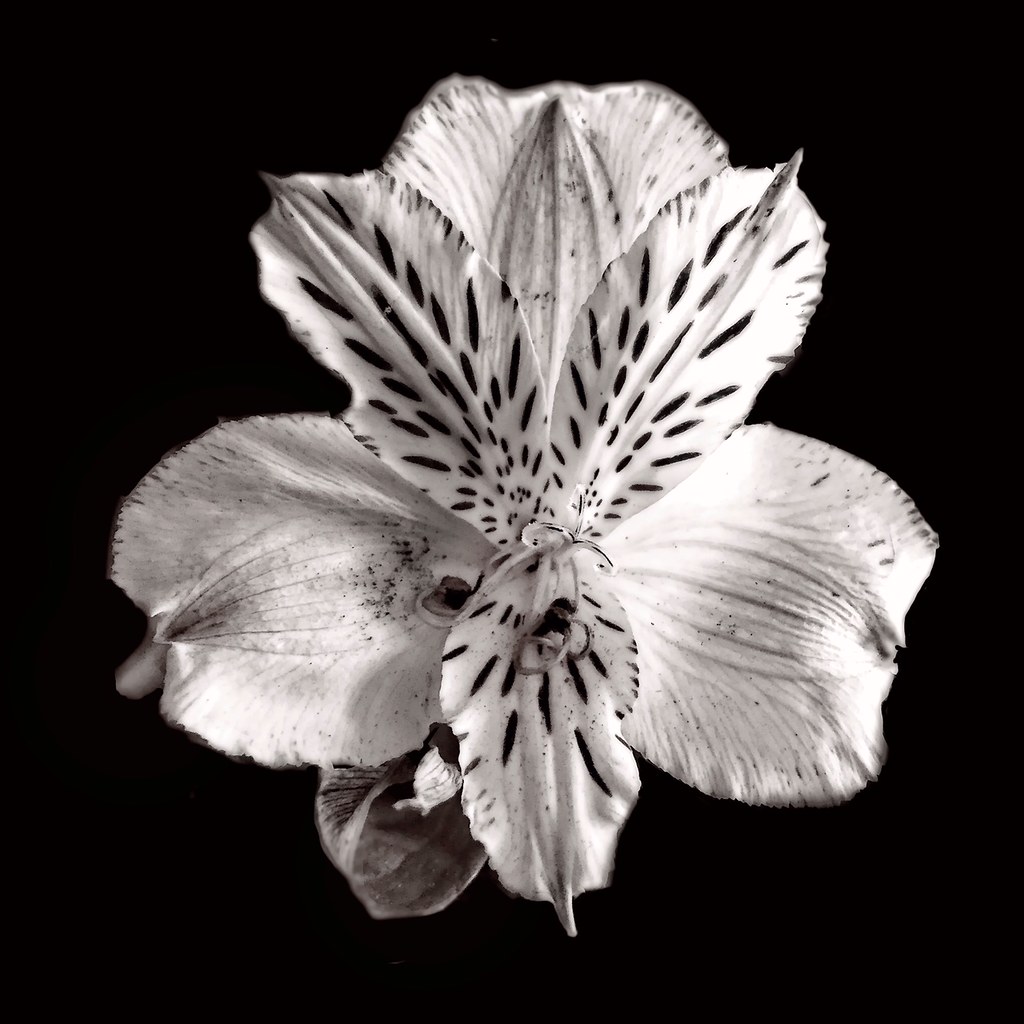 Apps used: Snapseed and the new app Photo from Affinity for iPad
Backstory: This is a very close shoot from a bouquet of flowers I saw in a flower vase. There was very nice natural light. The original color was white with a pinkish tone, yellow, little green and the black spots a deep red. I thought it would be perfect for a B&W conversion with a black background to highlight and contrast the different tones of gray and texture. I like the final result and I finished it with a light color filter to give more contrast. 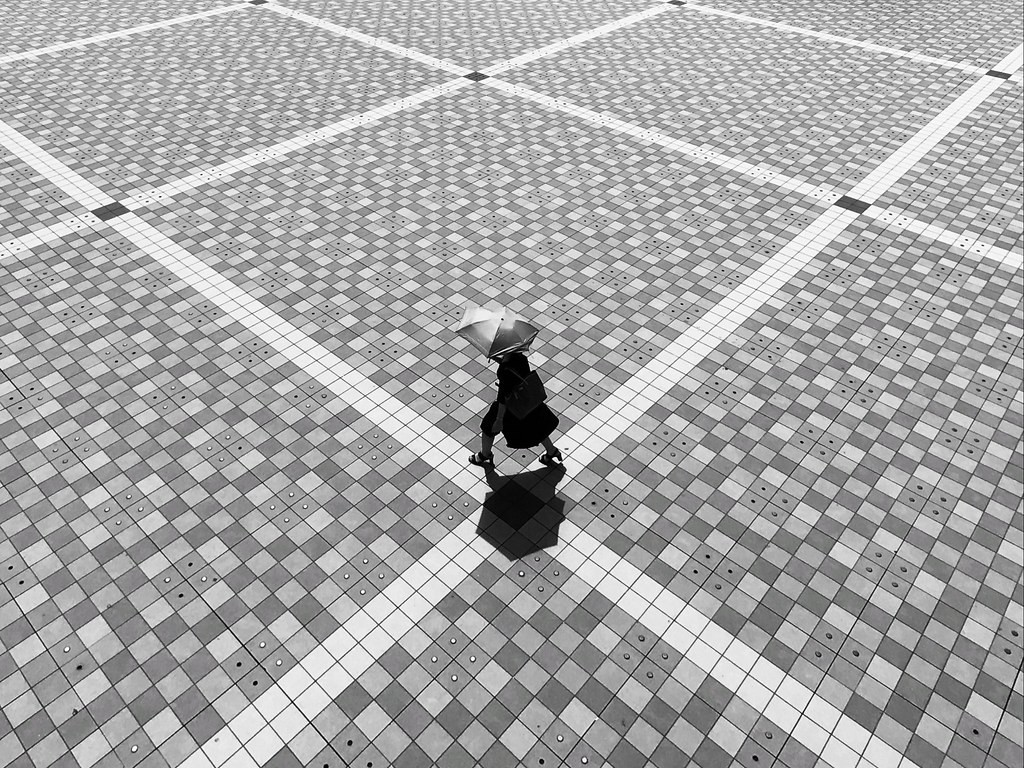 Apps used: I made a few tonal adjustments in Snapseed and also used a transform tool in SKRWT to change the perspective. Backstory: On the square’ was shot in Osaka during a recent business trip. When I arrived it was fairly cloudy so I was feeling a bit frustrated as I didn’t have a lot of time. Fortunately, after waiting for about 20 mins, the clouds opened up and the location looked great. I was also lucky that this lady then passed by with an umbrella. 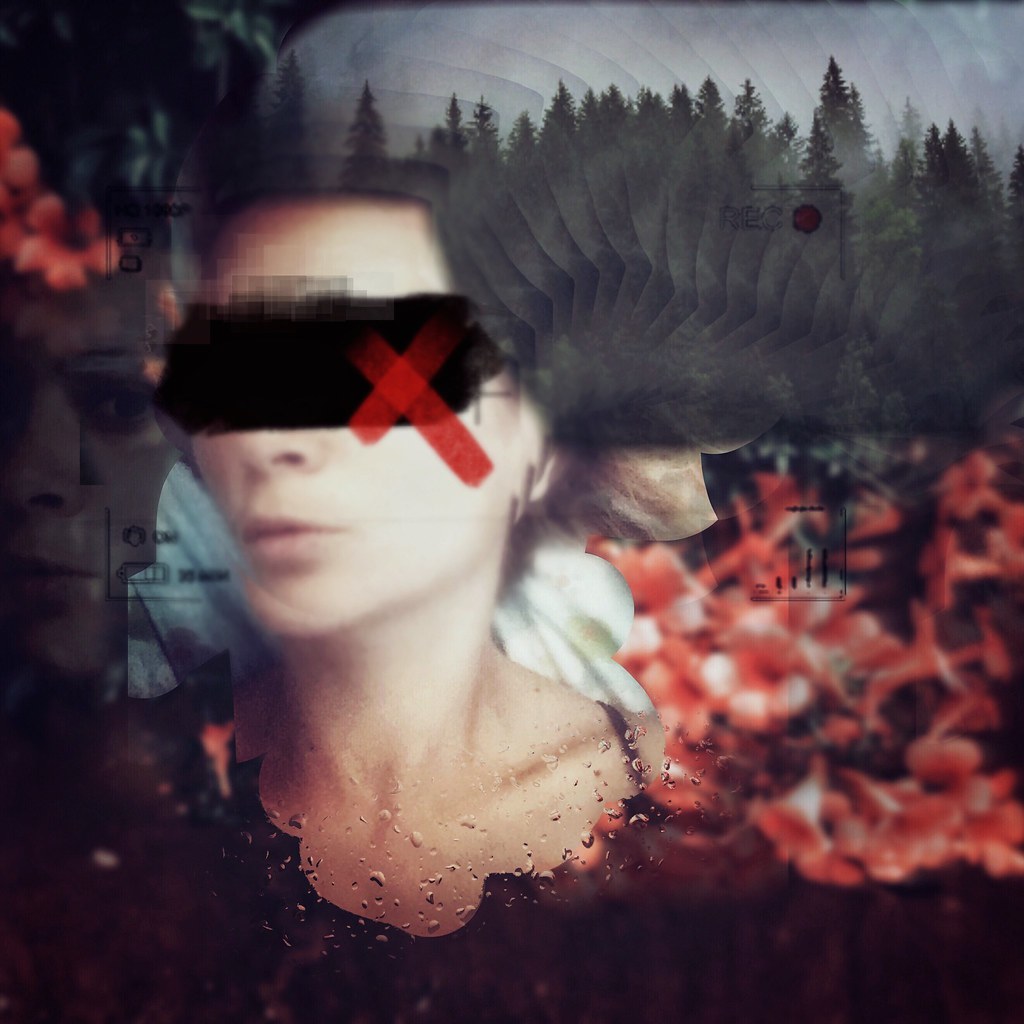 Apps used: Shot and edited on my iPhone 6S with PicsArt, Snapseed, Repix, Mextures
Backstory: It goes from the simplest way of capturing the self to the more complex process of transfiguring the moment itself into a moment of deep inner introspection. I have layered the background images, which are mine as well and played around the idea of memory, where the eye can only perceive that time already gone now. Sometimes our perception is blurred away or even distorted that’s how I can explain the ‘new’ self where red cross obstructions the sight. You can see the original self doubled and detached on the left side of the image. 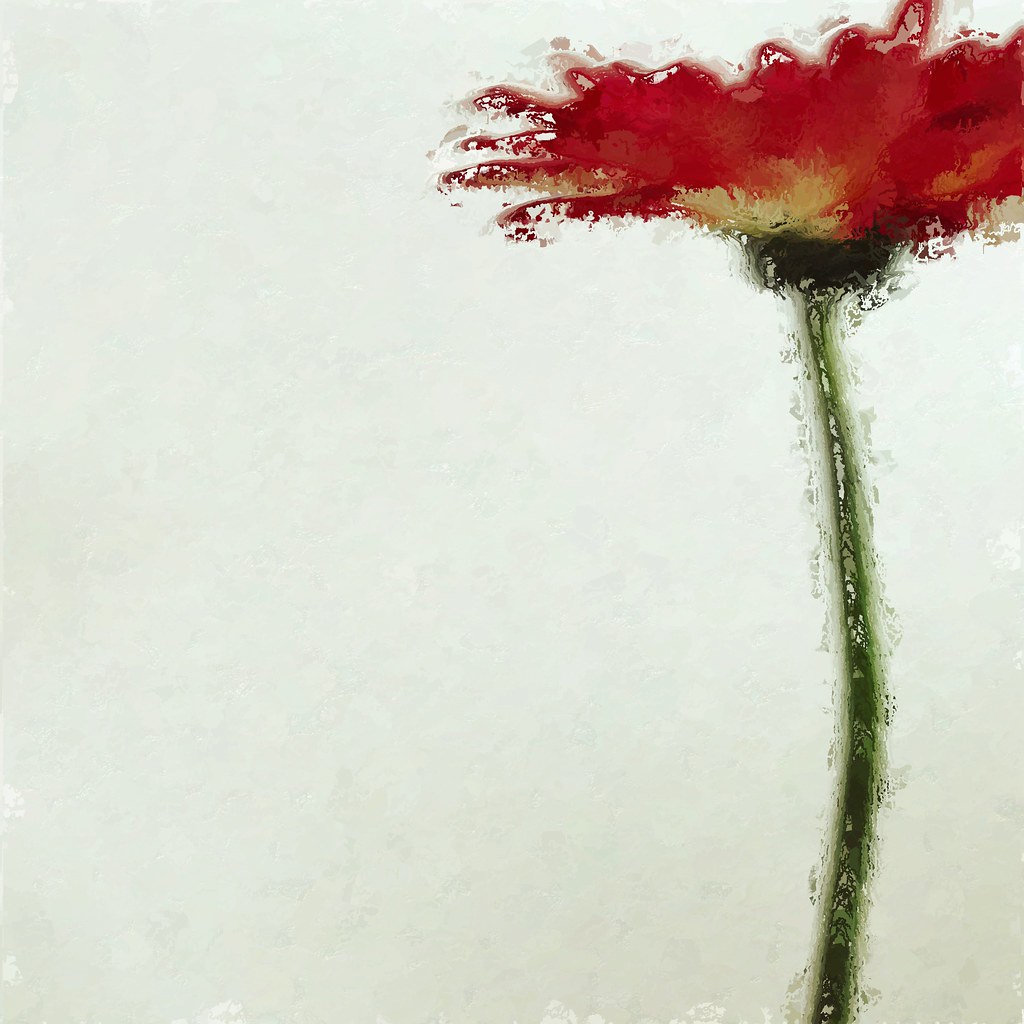 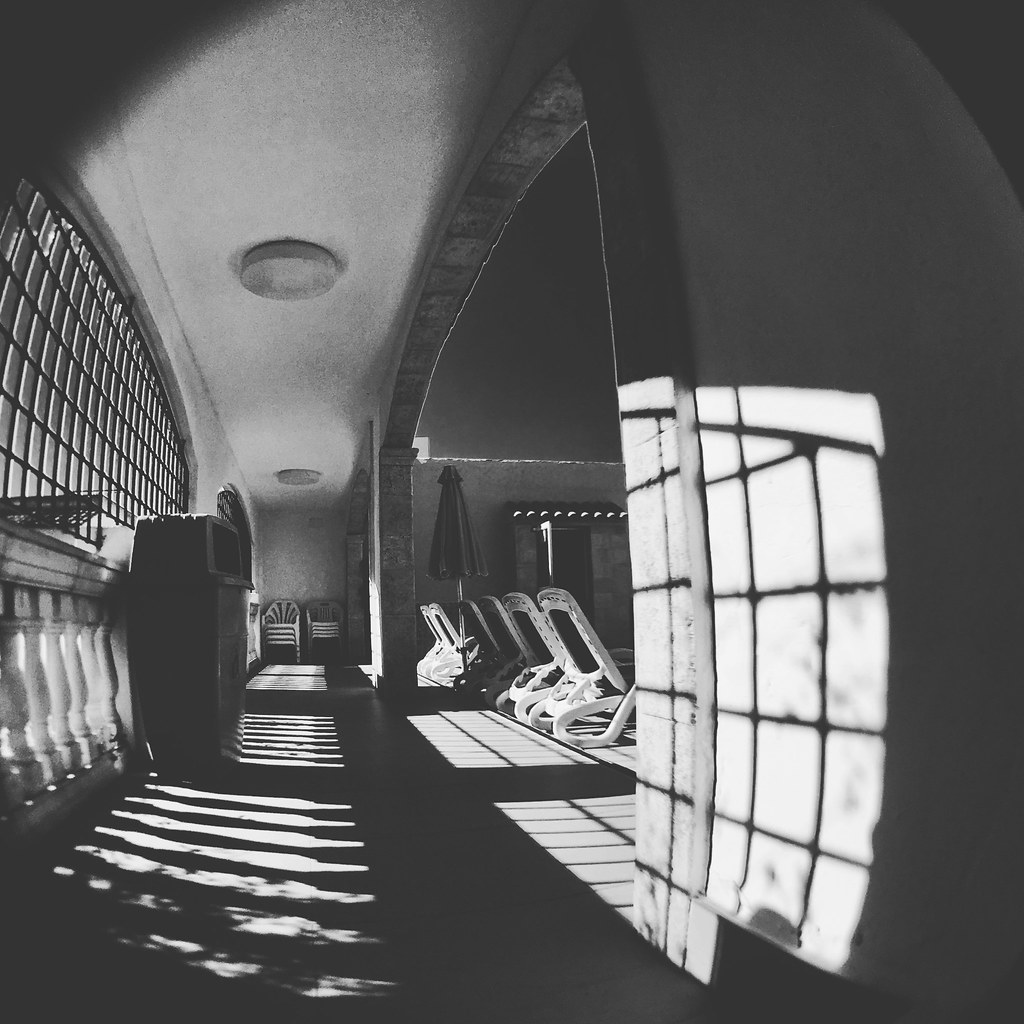 Apps Used: This was taken with my iPhone 6 and with a fisheye toylens, I edited with standard in iPhone…to black & white, strong contrast, no special app.
Backstory: I composed it by the sunlight and shadows in lines…that I found so amusing. It was in the morning at the hotel I brought my kids in Alcudia, Mallorca. No people around…the pools where empty and only the cleaners and me were up.