This week’s Apps Uncovered includes a great range of imagery, from still life and landscape to street and the conceptual/surreal (with a painterly image thrown in to round things out). Eraddatz Photo leads off with an amazing conceptual image, that touches on the qualitative difference between compassion and pity. Other contributors include new favorite Cedric Blanchon (watch for an upcoming article here on iPhoneographyCentral!), David Ingraham (a contibuting artist in our book and Southern California musical sensation), Janine Graf, Kathy Clay, Pamela Hochschartner Viola, Millo Salgado (on land this time), David Bithell, Louise Whiting, Brendan Ó Sé, Cindy Buske, Erika Brothers, iJoxo, Chad Rankin, Mary Fennell, Gianluca Ricoveri and Iniks.

Compassion being a curse, he turned away in pity by Eraddatz Photo

Backstory: The original photo was taken as a selfie using Slowshuttercam. After I pushed the shutter (set on light at 8 sec) I spun around in a circle as the photo exposed. For this piece I had been intrigued by the iPad app SketchbookPro and the possibilities it afforded. Choosing the photo was all about the angle and the turn of the head and a good deal that I knew of his politics and stance on social justice. Using the erase brush on Sketchbook I “smeared” in the direction to enhance the “turn” pictured. It was then that my epiphany occurred and I added the red to depict tears, not the “true” idea of tears but a symbol that seemed to me of a untruth related to the opposite of the subjects real views, pity being the expression arrogance and lack of a real understanding of the plight of those truly in need.

Backstory: This photo is part of a series “mini me” a bit surreal and humorous, this is the second of the series, until the next, I have lots of ideas 🙂 I made the small scale with toothpicks, I then took a picture with the timer of camera+ (I had to simulate taking the sugar cube) I made several before finding the right posture, then i took photo of the piece of sugar and I adjusted with superimpose, I placed my body behind the spoon, I deleted my feet for simulated my position behind the spoon, I then used oggl with the loftus lens combo + D-flat film . My Sugar was ready! 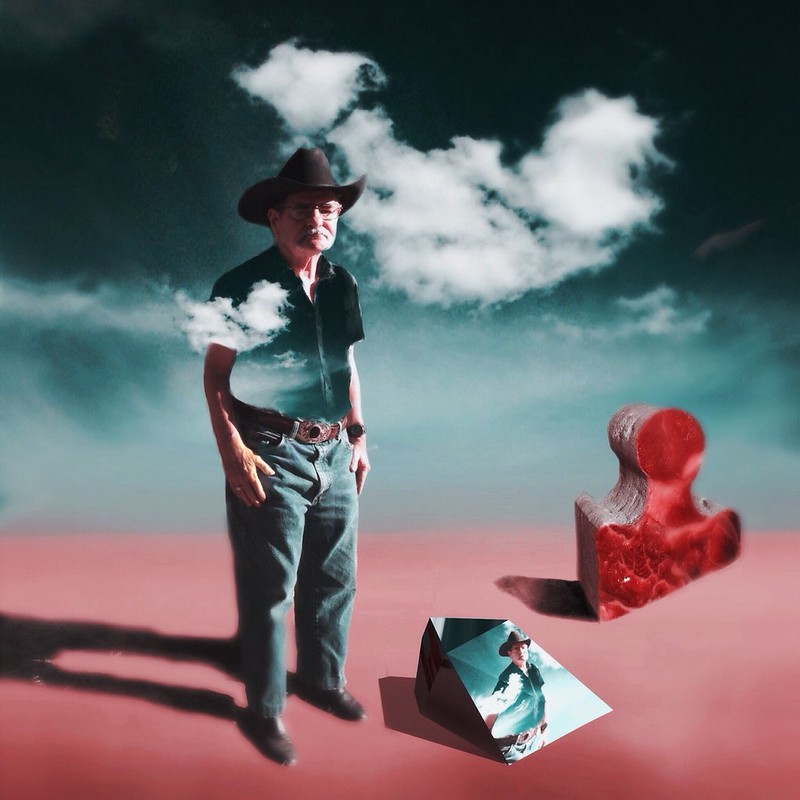 Backstory: This image was created solely on my iPod touch 5g. I saw this man waiting for a bus and knew I needed to take his picture. When I asked if I could take it, he responded with a cool demeanor much like the Duke himself. At that point I had the idea that a true Cowboy would never wear a Sky Blue shirt. I used the app Juxtaposer to layer several images to create the composition of a surreal landscape where Cowboys wear Sky Blue shirts. After I was happy with the composition I used the app Photoforge2 to adjust the color tones and add a radial Blur. My last step was the reflective crystal which I got from the Matter app.

John Wayne may have never wore a Sky Blue shirt, but in a Surreal world he just might have. 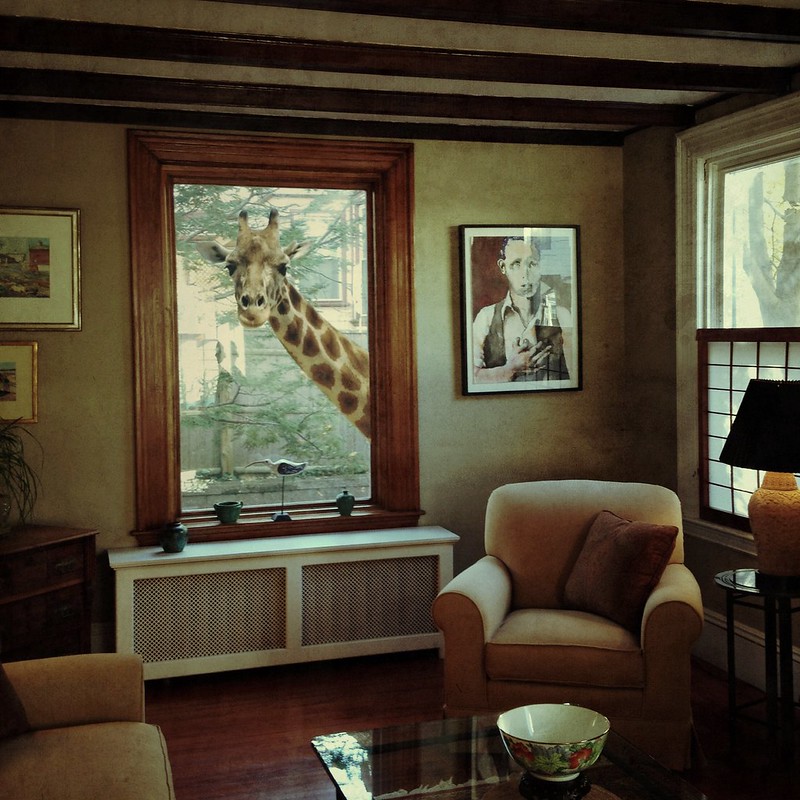 Backstory: I wanted to state that this is not my house; although I wish it were. When we were kicking around the idea to move to Massachusetts, we flew out during Thanksgiving week to make sure we wanted Massachusetts to become our new home. I had been drooling over this house on a real estate website so we decided to drive out and take a look during an open house. First of all, the house is PINK! I loved the idea of living in a pink house. This house felt so right to me; the owner was selling because his girlfriend (I don’t think they were married) had passed away and I believe he wanted to get away and start over. She was an artist and the walls were covered with her art. I will confess, I teared up when I walked inside. It was built in the late 1800’s and had charm oozing out of its walls. We weren’t in the position to buy at that time (we still had a house in Seattle to sell), but I’ll never forget this house. So glad I took photos that day.

Backstory: I took this image of my daughter at an abandoned old facility. We were really just having fun, working on portraying various emotions using the filtered light we had available and some items we’d brought along – including a large feather. The camera is Hipstamatic, BlacKeys XF film with Loftus lens and no flash. All the light is natural, as is her movement – no long exposure or additional editing was incorporated. 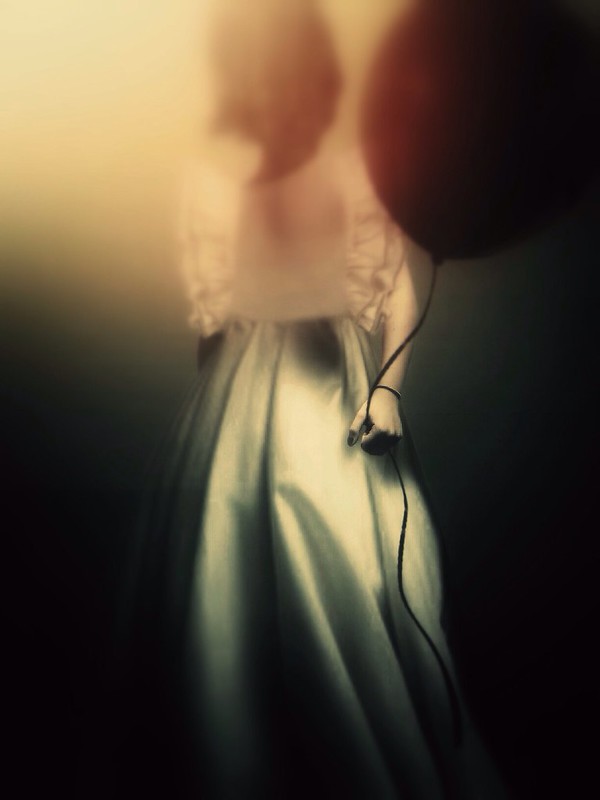 Backstory: I started with Superimpose to compose my photo collage, at this point I started creating expressing my idea and history of the art piece. After the composition and structure of my picture was finished, I used Snapseed with the option center focus to accentuate the main focal point and Retrolux to adjust the tones and lights.

Backstory: I’ve been doing a lot of heavy compositing lately and wanted to do something simple, quiet and elegant with a single image as a way to clear my head and relax.

First I brought the image into Alayer to play with the color palette – soft and soothing. Then I added multiple layers of texture, also in Alayer.

Next, I brought the image into Snapseed for refinement of highlights and shadow, I wanted to decrease the contrast. I did a spot adjustment of the lips to make them darker and less saturated. Then I cropped the image a little.

Finally I used Lo-Mob (New Emulsion 71) to get the irregular border and runny look.

Backstory: This image is made up of two Hipstamatic shots (John S lens/AO DLX film) combined vertically using the Diptic app. I’d taken both shots while shooting with a friend Downtown L.A. but they sat in my phone for a while. One day I needed a quick promo post for an exhibition I was participating in and in a brief moment of serendipitous inspiration tried combing the two images in an attempt to create the look of one. After a little Snapseeding and a subtle frame from Pixlromatic, this was the end result.

Man on Bench by Millo Salgado

Backstory: I used HIPSTAMATIC for the shot, classic John S with BlacKeys super grain film. Suchitlán is a small town where traditions with preHispanic Nahuatl origin are still preserved, like the hand carved in wood masks decorated with bright colors. People say is full of warlocks and witches and magic. This man was sitting on this bench one Sunday morning, talking to himself. The bench is outside a butcher’s shop, so there’s always dogs at the doors, like this one. I tried to capture an image, in black and white, trying to recreate the magic atmosphere of this Mexican town. 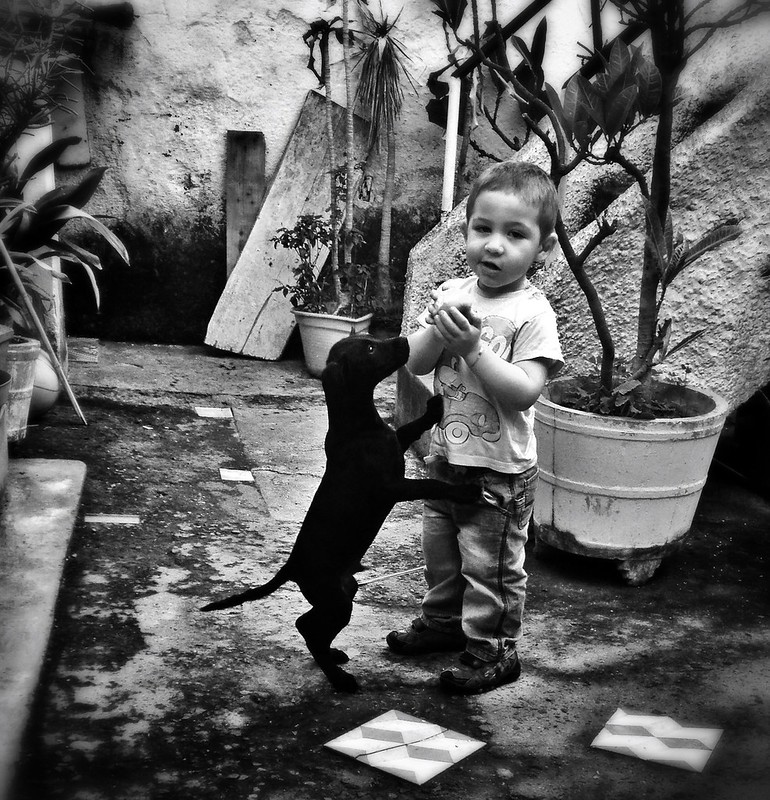 Backstory: I snapped the picture when I saw a boy eating an apple and the dog tried to steal it from him. I made some tweaks to the original picture in Snapseed.

The View by Kathy Clay

Backstory: The inspiration for this image was a painting that was exhibited at the San Diego Art Institute which is a gallery that shows the work of local artists. It was a painting of a wall of paintings with only a cat looking up at them. I loved the mood of the painting. When I visited the Cleveland Art museum about a month ago, I took a photo of an empty room with a large window and bench. Looking back at the photo I realized I could use it to try to create a mood similar to the one in the painting I admired at the Art Institute. I used our family pet Tiger as the unknowing cat model (she will be honored to know her photo is included in this showcase— maybe not, but I am surely honored).

Backstory: Taken in natural daylight using the rear native camera in iPhone 5s. I opened the image in ArtStudio to dodge and burn the leaves to add depth and then Stackables to add texture, using different blend modes to achieve the desired effect.

Backstory: The hydrangeas are grown in the garden of my mother and I photographed them lit by a window behind a white curtain. I took the initial image using Oggl with Lowy \ Sussex, for the tuning I used Snapseed and finally I added various textures in MEXTURES first and then in Grungetastic. 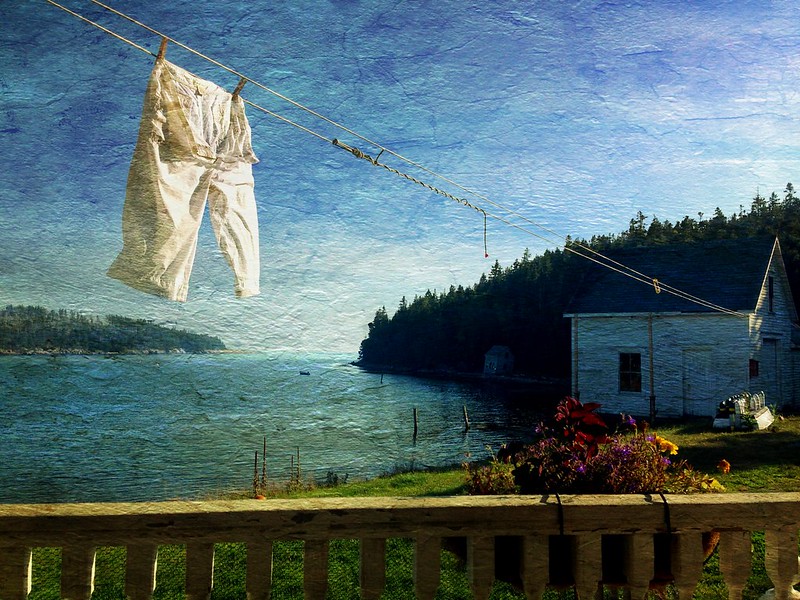 The Clothesline by Mary Fennell

Backstory: I was sitting on the porch at Kate and Ellard’s house on Isle au Haut, Maine, looking out on the harbor as the wash dried in the afternoon sun of a late August day. The photo was shot with an iPhone 5, processed in Distressed FX with a “Charm” filter.

All free by Brendan Ó Sé

Backstory: The image was taken on a subway train in Tokyo with an iPhone 5. I processed it later on Snapseed to crop and do a little work on the contrasts and highlights. I was careful in the composition to include the All Free advertising sign.

Commuting can be drudgery. The thing that strikes me about it is that the isolation. People are put in such close contact with others; most sharing the same experience, but so little exchange occurs. In Tokyo, in the mornings there is silence. Silence as the masses travel. In the stations, all you hear are the public announcements over the tannoy and the footsteps of the throngs on the move. Mobile phones are not used and no conversations are struck up among the passengers on the trains. People choose to shut their eyes to snooze or shut out the world. Others find a space to stare blankly into, while so many will pass the time engrossed in what their smart phones can offer. We crave isolation in the close proximity of others.

Backstory: When i go to work on an a photo i tend to play with apps until i find a combination that appeals to me. I don’t write anything down. I began iPhoneography using Apps and Flickr one year ago so am still in the experimental stages of development. I do however favour certain Apps.

On this image i used Hipstamatic: Jane lens/Ina’s 69 film for the initial shot but, my best guess for the rest would be ..iColorama: Painterly effect as i use this quite often to soften the image..next Snapseed: to tune image..next Pixlromatic: to change overall color and back again to Snapseed: for more fine tuning adjustments.