This week’s lead artwork is a self portrait by Louise Whiting that draws the eye with the enigmatically shaded face and bright lines of the clothing and ornaments (?) distributed throughout the scene. Is is some mystical communion or simply a fashion statement? We’re left to determine for ourselves. 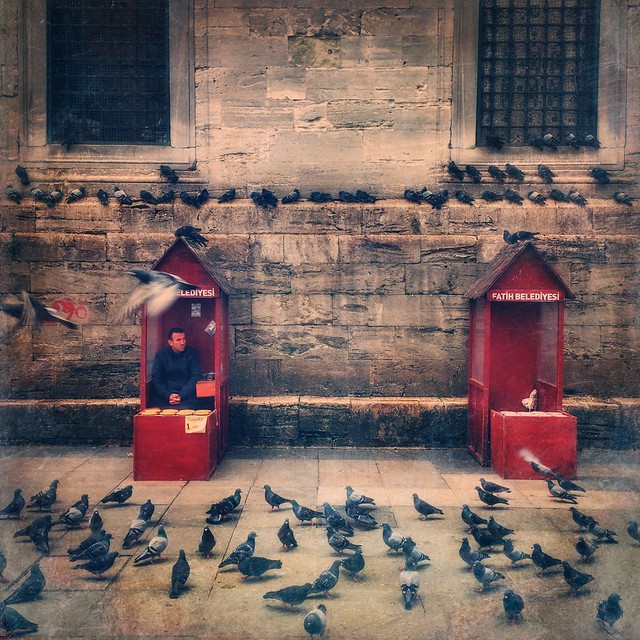 Apps used: I shot with the iPhone 6 default camera and edited in Snapseed for basic refinements then in Hipstamatic (Tejas Lens and Love 81 film).
Backstory: An old photo from two years ago, the small pigeon feed stalls in front of the Yeni Cami in Istanbul, always surrounded by birds. It is a popular place for photos, but only this time I have found the right atmosphere, slightly forlorn. 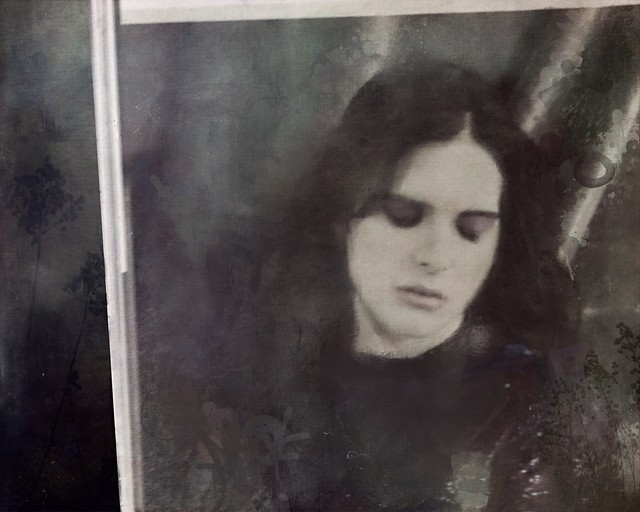 Apps used: Procreate, Leonardo, Repix, Stackables
Backstory: I am relatively new to mobile art as I created my art for years in Photoshop. Having decided to start using my iPhone and iPad for making art I am all over the place, looking at and trying out apps, looking at tutorials and websites. I came across MAG Mobile Art Group and found a very interesting and supportive group. They have been having challenges so I decided to try my hand at the latest “Art Portraits”. My idea for this portrait was moody and subdued, a look through a window. I played around with the original photo of the girl removing most of the color and layering in lots of textures. I was happy with the result but I know I have a lot to learn. 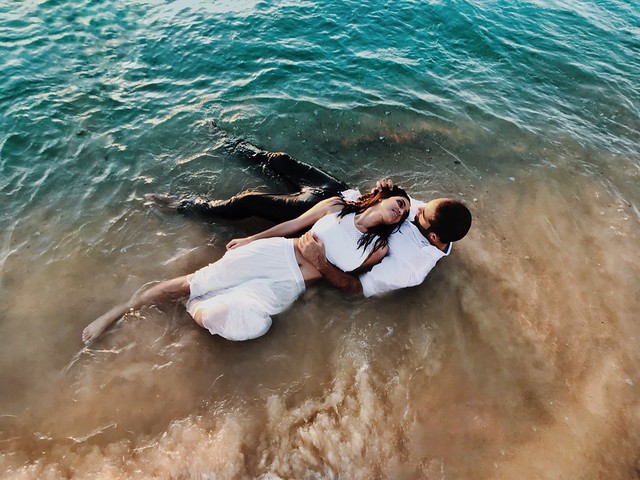 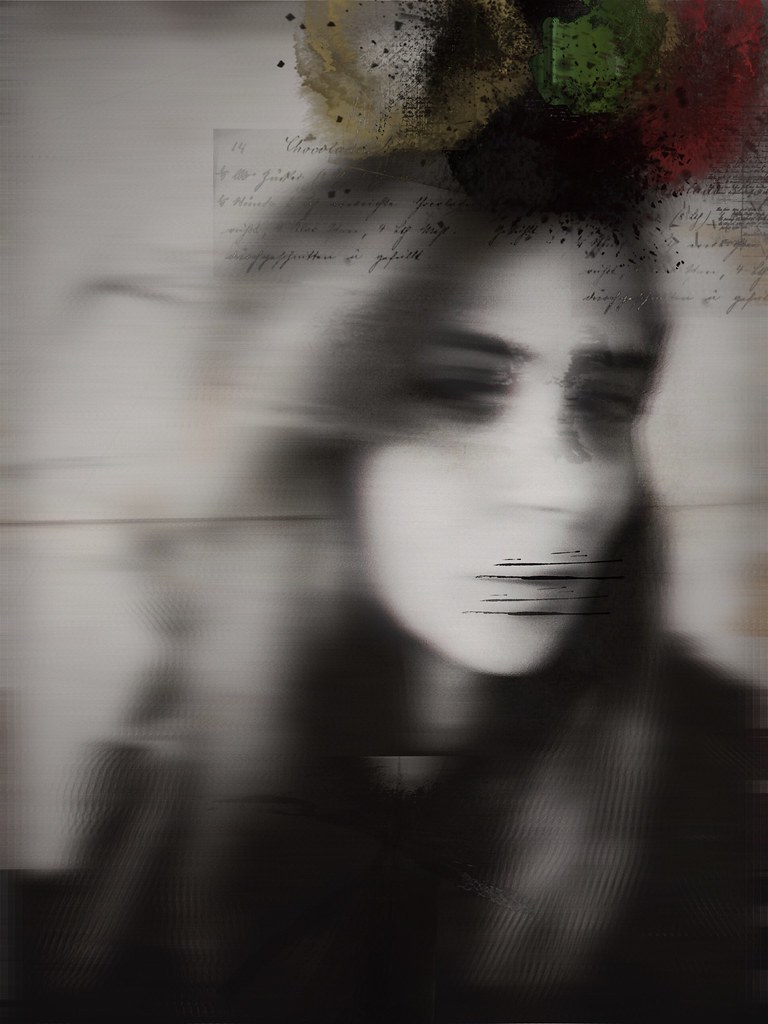 Apps used and backstory: Originally shot in Hipstamatic with an iPhone 6Sit was then filtered trough Snapseed and a bit processed in PicsArt and iColorama . IT’s a simple random self portrait trat translates its meaning through the motion and the blurred effects just like the second that has already happened and now is completely gone . It is all reduced to the image of an almost mute translation , the bits of the lines is an allusion for all the words that the frame must stand for. 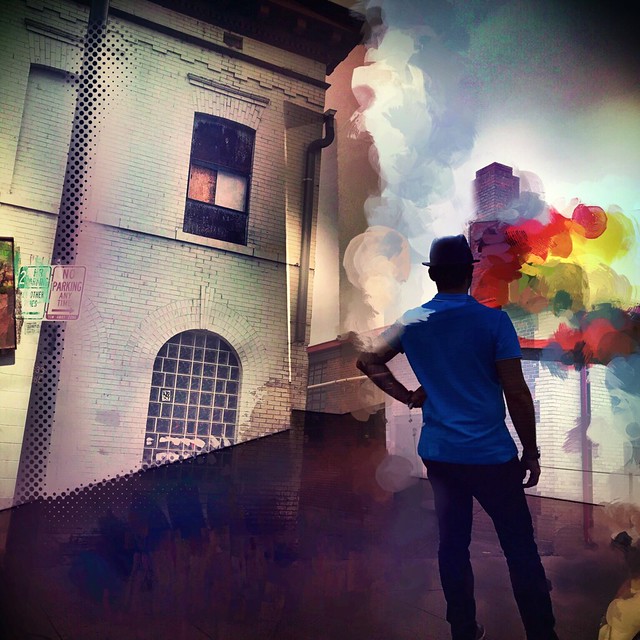 To Be Fully Present …. by Kate Zari Roberts

Apps used: snapseed, icolorama, repix
Backstory: This image is a composite. The man in the foreground is a photo I took at the Georgia O”Keefe Museum in Santa Fe and the buildings are from a shoot in Denver. I used Snapseed, iColorama and Repix. 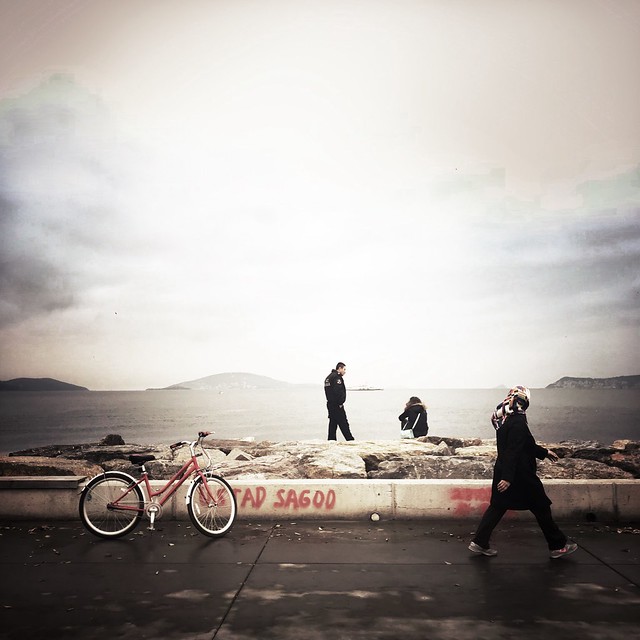 App used: Hipstamatic Oggi. Jane Lens + Blanko BL4 Film (post-processed)
Backstory: I took this photo at one of the beautiful banks of İstanbul during an early morning walk. First I saw the security man having a serious conversation with a young girl on the rocks at the seaside. Then I noticed the dumped red bicycle in complete harmony with the feeling of the scene and the red wall writings.
And finally when the lady who is also walking and most probably wondering the subject of the conversation just like me, entered the scene and it was the right moment to shoot. 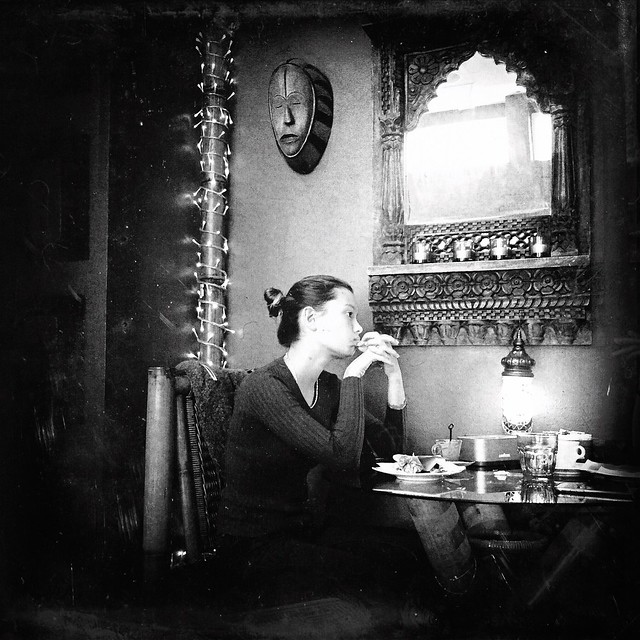 Apps used: iColorama, stackables and mextures
Backstory: I took this photo to Cagliari in my favorite cafe bar. It has a very friendly ethnic style and reddish lights. The young woman in front of me caught my attention for her grace and delicacy, and the picture would allow me to photograph her in an exotic setting. I have made two versions of this image: one in bw and one in color. 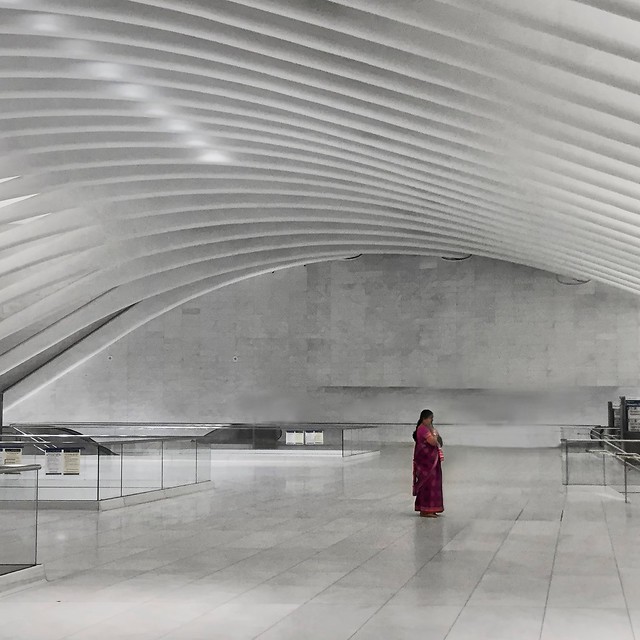 Apps used: Photo from Affinity for iPad. For editing, I only use Photo from Affinity for iPad which I find a great app. I use the impainting and heal brush to get rid of some small elements, straighten, crop, and enhance the overall photo with the help of several layers.
Backstory: his scene was shot at the transportation hub The Oculus at The World Trade Center in New York City. This is an amazing place and a dream for photographers. The building is all white and was designed by Spanish architect Calatrava. The light inside this structure is a mix of natural and artificial so depending on the hour of the day you can capture fantastic shoots. Always there is a lot of traffic but once in a while, you can catch scenes like this. I wanted to capture the idea of a huge place and structure. So, I waited for someone in the scene to have a sense of scale. Fortunately, I got this woman with her colorful dress passing by. 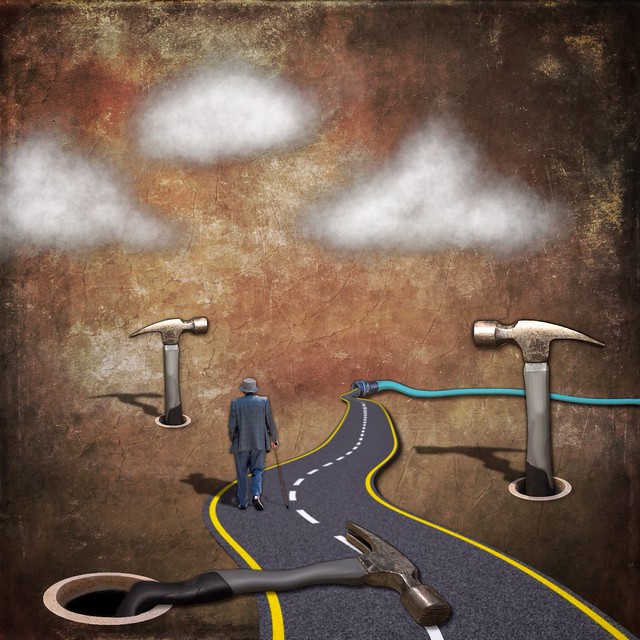 Hit the Road by Wayman Stairs

Aps used: art studio, snapseed, mextures, stackables.
Backststory: My friend @sleekmaus and I have been doing a series on idioms where we decide on one idiom and each of us interpret that idiom using our art. That’s I started composing this piece. The hammer trees and one falling on the road and hitting it and the man walking down the road or also “hitting the road”