This week’s Apps Uncovered presents a selection of what I found to be the most compelling images for the week, across a wide range of styles and subjects – all celebrating the theme of One, Two & Three (loosely interpreted for my self-serving purposes).

This week’s lead artwork, by iPhoneography Central “regular” Angie Lambert, is delightfully lightweight in subject, but superlative in execution. It doesn’t take itself too seriously, yet shows a great deal of creativity in concept and realization. 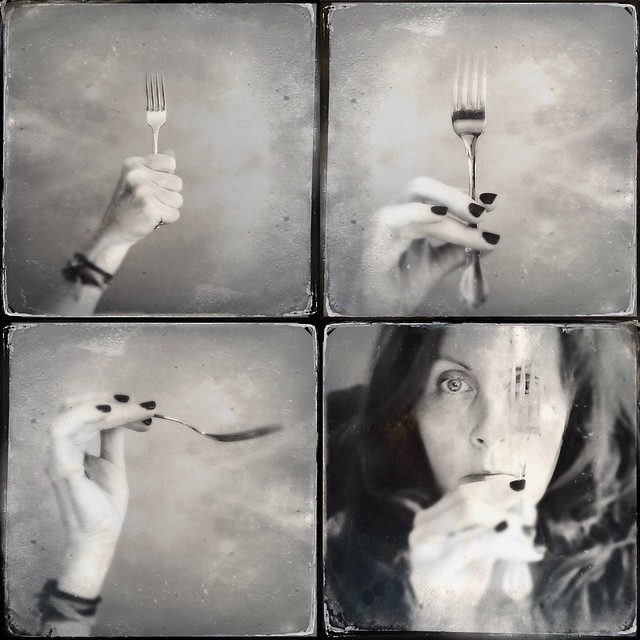 Apps used: TinType and Pixlr
Backstory: I had washed dinner from the dishes. I was just about to place the fork in the drawer when I stopped. I considered all the times I had simply needed a fork to eat. What I had not considered was taking a picture of one. Why would I? We only use them as a device with which to eat, right?

That thought brought me to this:

What if you took a second or third look at an ordinary object and found a new use for it? Honoring the energy from creative, new options for ordinary objects can be liberating experiences. It’s a simple exercise, with an unexpected outcome.

There is always a new perspective, a fresh outlook to things, if we take the time to notice. I love photography for this reason and so many others. 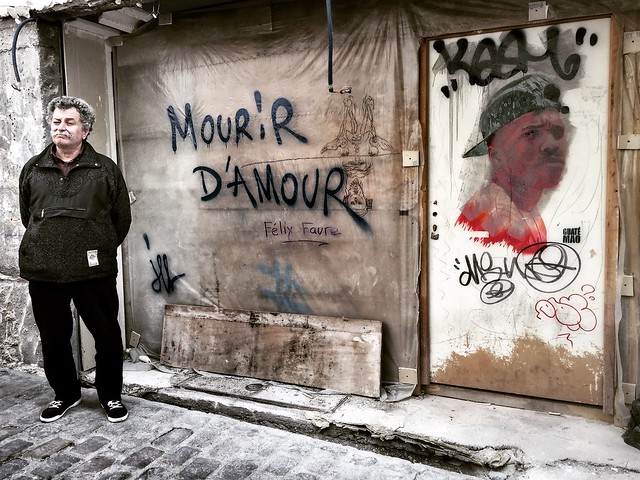 Apps used and backstory: Taken with Iphone 6 and edited only with Snapseed.

This shot was taken in Paris. I was first attracted by the background and then noticed the standing man. This was my second shot which he also noticed me and posed. Wish you all a fun Sunday! 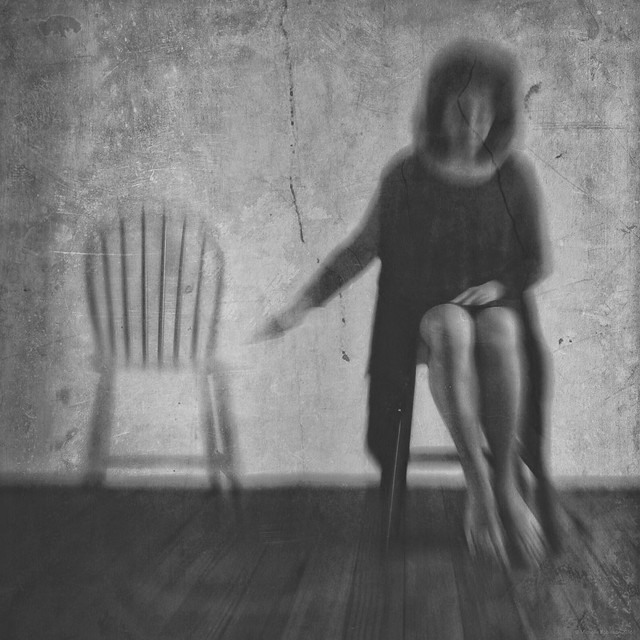 Mourning, v2016, 2 – Processing Your Passing Has Been Tough by Michelle Robinson

Backstory: The idea that you are no longer here … It’s been tough to wrap my head around. It is not possible. Your personality is larger than life. Cancer was afraid of you. But cancer is also larger in toxicity. The f**kers kept coming back. How DARE they! I know you’re loving this. And hating this. You’re loving that I’m telling the world of your brave and incessant fight; you’re loving that your friendship meant that much to me. You’re hating that I’m filled with sadness. I say your words back to you: “Tough shit. You’re just going to have to suck it up.” 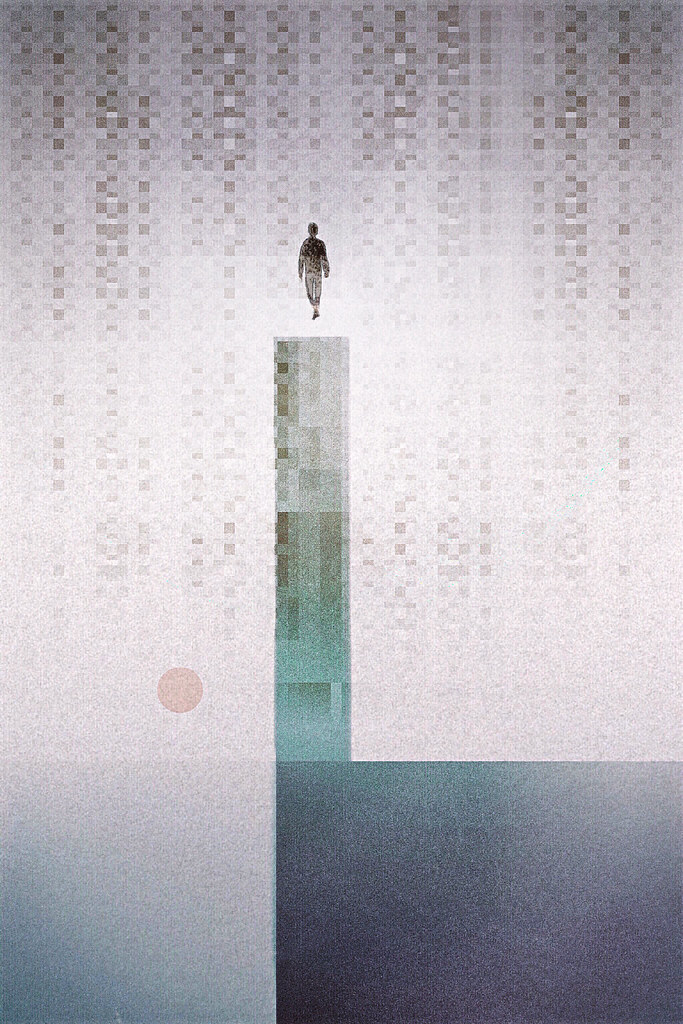 Hội An night life by grapfapan

App used: Snapseed
Backstory: I used only the standard camera app of my iphone and snapseed for some minor postprocessing.
I found this situation in Hoi An, a small town in the middle of Vietnam, where I spent some holidays. This evening I was on the way back from town into my hotel. I rode on a bicycle and stopped here, because I discovered this scene of people. I immediately found it very exciting and had to take a picture…!
So I took it – and continued my way…
Like a normal street photographer is used to do 😉

Apps used and backstory: i very much like this little, unimposed, blue flower. nigellas grow undemanding, are modest and easily overlocked. in the symbolic language “nigella” was the flower of spurned love. the sending of a nigella was a clear signal of rejection. i rather see her as a dancer in the wind. she has many faces, looks as beautiful in bloom as withered, but always has a touch of sehnsucht and sorrow. shot with hipstamatic. annemarie lense, runway film and triple crown flash.

Apps used and backstory: Superimpose, iColorama, Snapseed and Image Blender. All pictures and editing with iPhone 6+ . The image was inspired by the song Lost Boy. Oftentimes, I feel very lost, like I have slipped into an alternate heartwrenching reality, and I am desperately trying to find my way to Neverland, away from all reality. “He sprinkled me in pixie dust and told me to believe
Believe in him and believe in me
Together we will fly away in a cloud of green
To your beautiful destiny
As we soared above the town that never loved me
I realized I finally had a family
Soon enough we reached Neverland
Peacefully my feet hit the sand
And ever since that day…

descent into the hive by alan kastner

Backstory: My thought for this image was to celebrate a return home of sorts, with flowing lines and warm backlighting helping to illuminate the path our protagonist takes. The stained glass window that dominates the scene is one of several created in 1926 for a department store in The Hague. I knew how I wished to frame and use the shot the instant I laid eyes upon that window.

Apps used and backstory: Portrait taken with the native iPhone 6+ camera and edited in Procreate and Snapseed.

What the Water Gave Me by Kristie

I used several apps for this image, that I snapped with my iphone6s. The shot was taken in Camera+ with the self timer. I started editing in the MasterFX app, to blend my portrait and the background image of the rocks/water. I then took it into HandyPhoto to process into black and white & create the foggy look, after that, I used ArtStudio to do some slight blending, to make the two images more cohesive, and then finished it off in Mextures to give it the texture.

I was inspired to create this while listening to the song lyrics by Florence + the Machine, which happens to also be the title of this piece.

Apps used and backstory: This image is an arranged still life. It was a rainy morning and I set up the composition near the north/northwest window in my study. I always prefer natural lighting and rain light,even through a window, invariably seems to surround objects with a wonderful diffusion . I tried to compose the still life carefully to achieve the placement, contrast and color I wanted; the bouquet in the blue pitcher had been arranged by my wife from flowers(roses and silver tansy) in our garden; I then added the silver cup ( actually a Tibetan ceremonial vessel) to give some tonal contrast and compositional balance. The strong lines in the wooden table added depth. Because the main light was mostly from the left, much of the arrangement was enveloped in a moody chiaroscuro, which I emphasized in post processing.

My aim was to illustrate,in essence, that it was the ambient lighting and the very simplicity of the still life that made it so visually stimulating.

I shot using a small backdrop and an iPhone 6s plus on a mini tripod and Plrocamera. I then processed the image in Fotograf ( I believe it was one of the film tones) and finished in Snapseed with additional basic adjustments.