Dreaming is the theme this week with dreamy and dreamlike images abound. Our feature photo from relative newcomer to Apps Uncovered, Mister Blur and his wonderfully dreamy image “you shone like the sun”. I love the treatment of this photo and the mood it evokes. You can find out how he achieves this by reading the backstory underneath the photo and if you love this style, as I do, I urge you click through to Mister Blur’s Flickr photo stream (just click on his photo below) where you can see lots more wonderful examples of his work.

I’ve also included a couple of irresistible photos that don’t quite fit the theme but could not be ignored.

Some iPC News: Bob Weil is taking a well earned break for a few months from selections as his life is pretty busy right now so if anyone would like to have a seat in the Apps Uncovered selection chair for one week or even a couple more please give me a shout. Experience of publishing to websites essential! 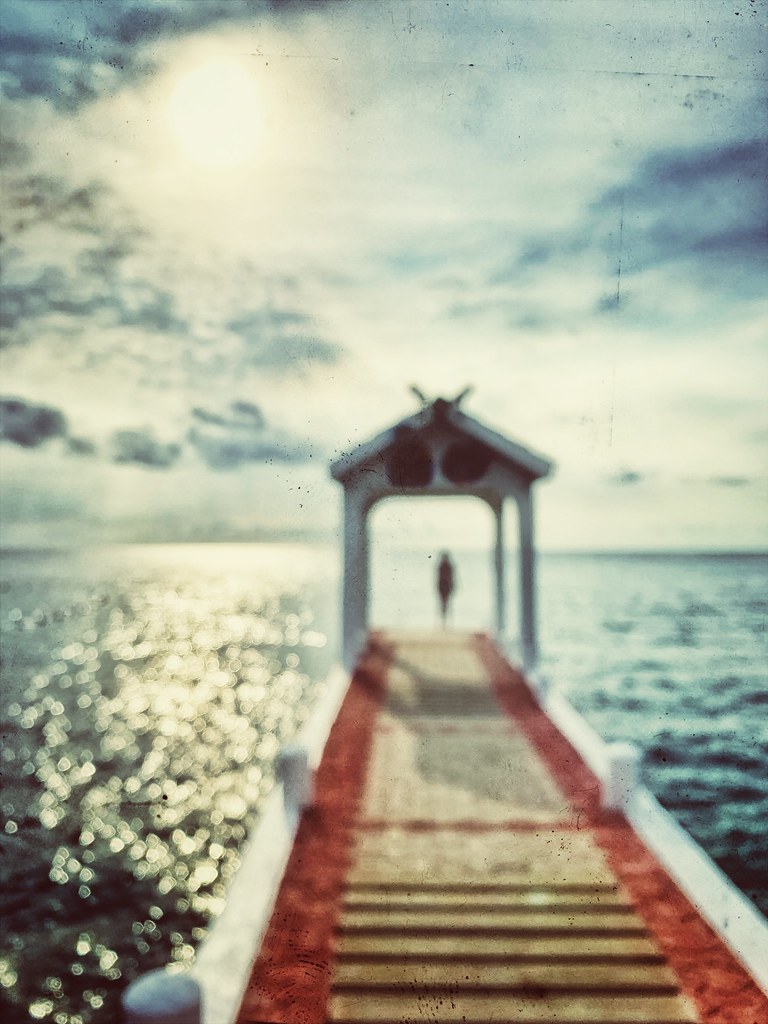 Apps used: I use only Snapseed directly on the iPhone XR.
Backstory: This photo was taken in the island of Cozumel, in the Riviera Maya in Mexico, it was Spring at 17:00, so the sun was still high and direct into us. This is a small pier for boats for scuba divers and there was some person standing still, so I found the right time for a nice shot. I unfocused the iPhone by turning it upside down and fix the focus on the edge of the screen, so I could it made a total blur scene. When the sun hits the sea in that position an the lens is unfocused, the blur effect is just great, with those magical bright bubbles, so, that’s it. 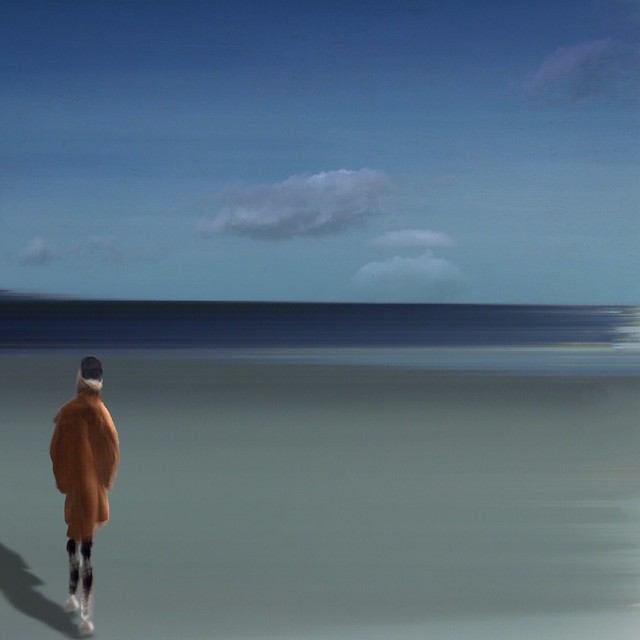 Apps used: Taken with Slow Shutter Cam on iPhone then edited with Decim8, Distressed FX, Superimpose X and Photoshop Fix.
Backstory: January is a month of contrasts around here. The weather can change radically within 24 hours. So we try, as best we can, to enjoy each sunny day, even when it’s bitterly cold. In this landscape, transformed with Decim8, the frozen ground suggests it is indeed a very cold day. The clouds, added with DistressedFX, could signal either milder weather ahead or an incoming snowstorm. A young woman, all bundled up, confidently ventures into this winter landscape. Taken with SlowShutter on IPhone, this silhouette was integrated into the other image with Superimpose X and edited using Photoshop Fi. 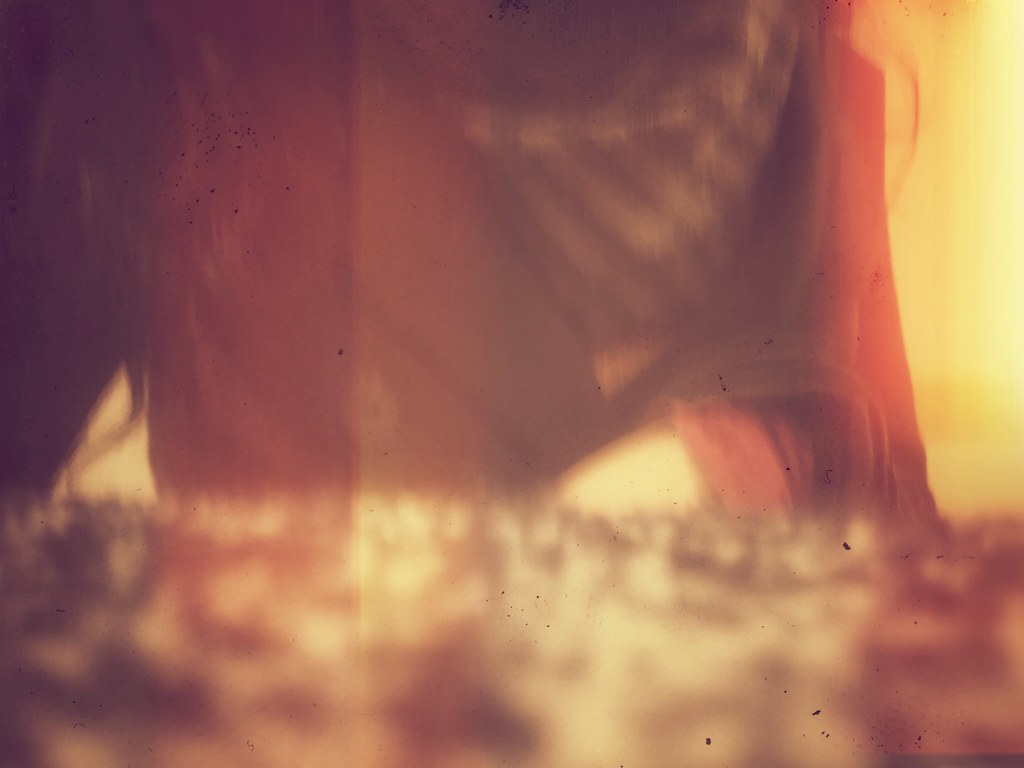 Apps used: Snapseed
Backstory: This is a casual photo made by the phone itself while I was talking in a weekly meeting about addiction and how it can affect your life.
I found this looking in the camera roll, it just popped and I immediatly loved it. 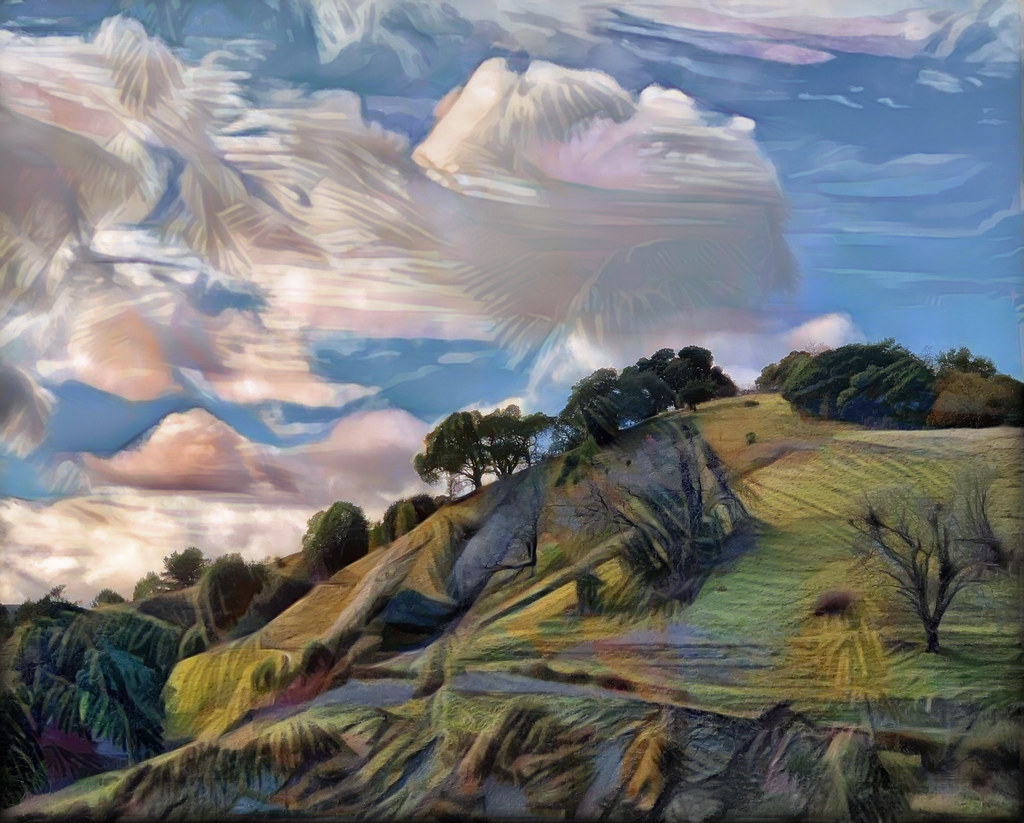 Bundled up for a dog walk by Michael Brunsfield

Apps used: Snapseed, Photoshop Fix, Dreamscope and iColorama.
Backstory: Taking a daily walk with my dog encourages me to get out and notice curiousities to grab with my camera. My images normally employ quite a bit of app dancing. I started with an image of a hill near my house and shot with my iPhone X. I usually start by opening the image in Snapseed, and cleaning up and removing elements to simplify an image. I can usually accomplish this with the healing feature in Snapseed. Occasionally, when there are tricky edges involved I might have to use Photoshop Fix because of the more sophisticated cloning tools. After making color and luminosity adjustments in Snapseed I try a few filters in the Dreamscope app. In this case I liked what happened when I tried a palm frond image in Dreamscope, but as is usually the case some of the image looks good and other parts do not look good at all.

To begin I open my corrected Snapseed image in iColorama on my iPad Pro, then add the filtered image as a new layer and test how they interact, trying out various opacities and blend modes to see how they mesh as a composite. As is usually the case, parts of the image might look very interesting, while other parts don’t work or are obscured when the layers are combined.

Now . . . I try again in iColorama combining the two images. I spend time with the masking tools within iColorama, hiding certain areas partially or completely while allowing other areas of the filter to be emphasized.

Finally, often using some of the same masks, I can alter the areas warm up the sky, add texture into the grassy areas, sometimes sharpening elements of the foreground. I don’t often know where this will lead, but it is always a FuN Adventure to attempt to enhance and turn my photos into illustrations. 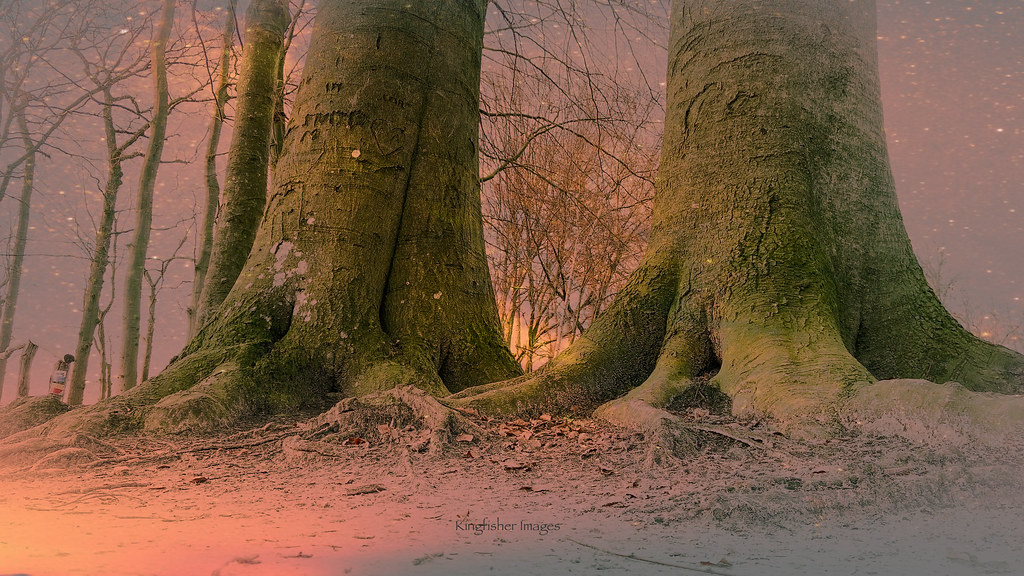 Apps used: PhotoShop Express only
Backstory: The day after Christmas, while walking about the park and forest of Renswoude Castle, my eye fell on these two great tree stems. Standing there, side by side towering tall, they reminded me of the title of book 2 of The Lord of the Rings trilogy by JRR Tolkien; The Two Towers. Hence the title of the photo.
The challenge was to capture the tree stems in such a way as to do them justice. To give it that special mood I love to edit trying all kinds of filters, settings etc. in Photoshop Express (where I do most if not all of my editing on iPad or iPhone).
I usually have a general idea of how the edited photo should look like, but this one came out as a bit of a surprise to myself. After some time I found this lighthole-filter to add something like a warm winter-glowy mood. Bingo. Quite happy with the result. I’m glad you like it too 🙂 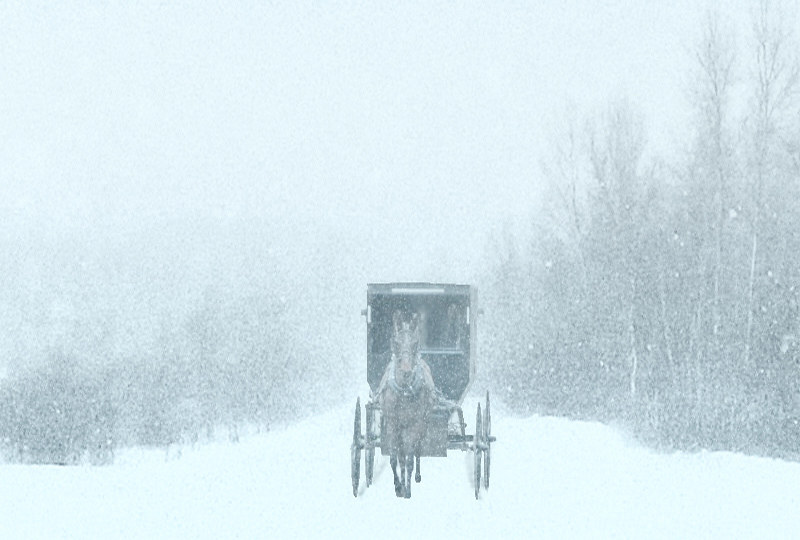 A brief snowstorm last week. . . always so tempting to go out and search for photos waiting to be captured. . . probably the best known American poem is Robert Frost’s “Stopping By Woods on a Snowy Evening” — which immediately came to mind . . .

Whose woods these are I think I know.
His house is in the village though;
He will not see me stopping here
To watch his woods fill up with snow.

My little horse must think it queer
To stop without a farmhouse near
Between the woods and frozen lake
The darkest evening of the year.

He gives his harness bells a shake
To ask if there is some mistake.
The only other sound’s the sweep
Of easy wind and downy flake.

Apps used: Photoshop Express, Snapseed, JixiPix Snow Daze
Backstory: Quite a few Amish live in the countryside near me in the Ozarks region (rural valleys and hills), so seeing them on the backroads in their buggies is not unusual.  And I love photographing on bad weather days – thunderstorms, blizzards, even when conditions are ripe for tornadoes because dramatic skies can make for great photos.  Unfortunately, most of the snow had already passed, so I used Photoshop to blur out the top half of the photo and whiteout the background with fog, then added a slight wintry blue tint with Snapseed, and finally added more snow with the Jixi app.  I also like to use the Jixi Rainy Daze for photos, too.  The final image seems more like how I imagined the scene, darkening it a little so the Robert Frost poem, “Stopping By Woods On A Snowy Evening,” seemed the perfect compliment. 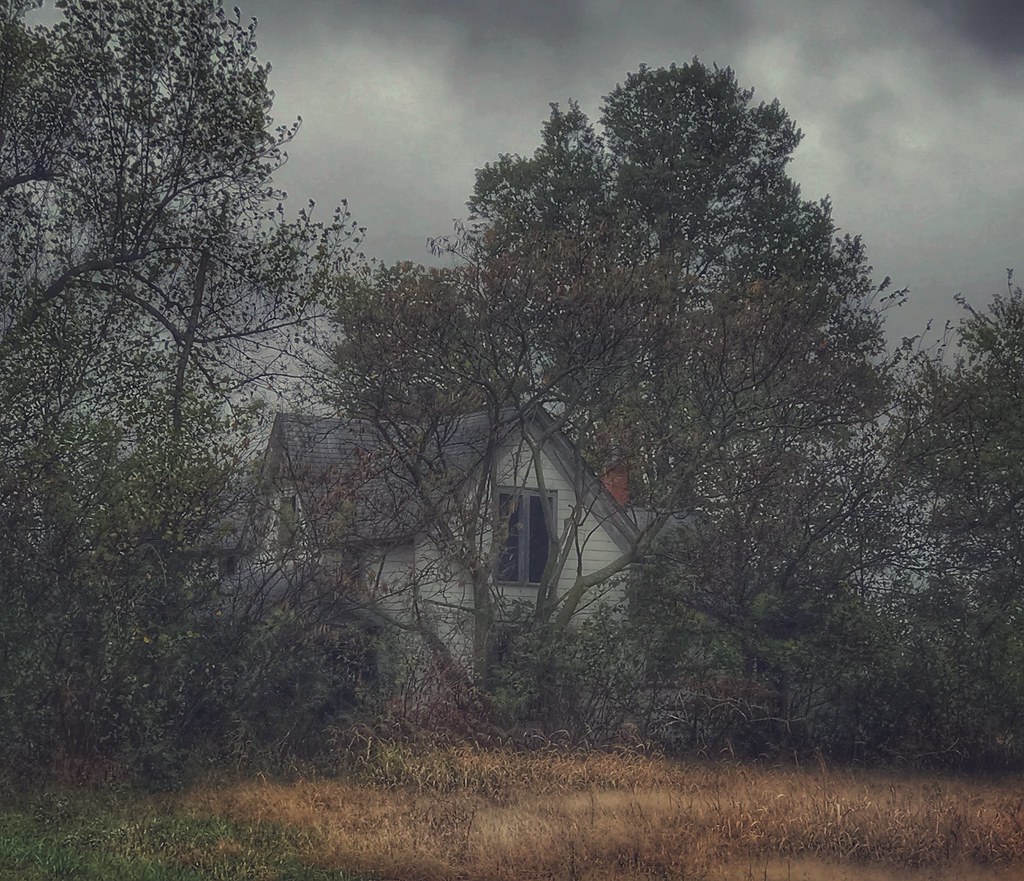 Dark secrets by Sherrianne100
Apps used: Snapseed and Mextures.  Backstory: I spend many hours driving the backroads of the Missouri Ozarks, searching for old barns and farmhouses that will soon disappear from the landscape due to neglect and abandonment. This old house was one that seemed to hold many secrets as nature slowly takes over and reclaims what was once hers. I often wonder what stories these old places could tell us, but maybe they are too private, too dark. Maybe I really don’t want to know….. 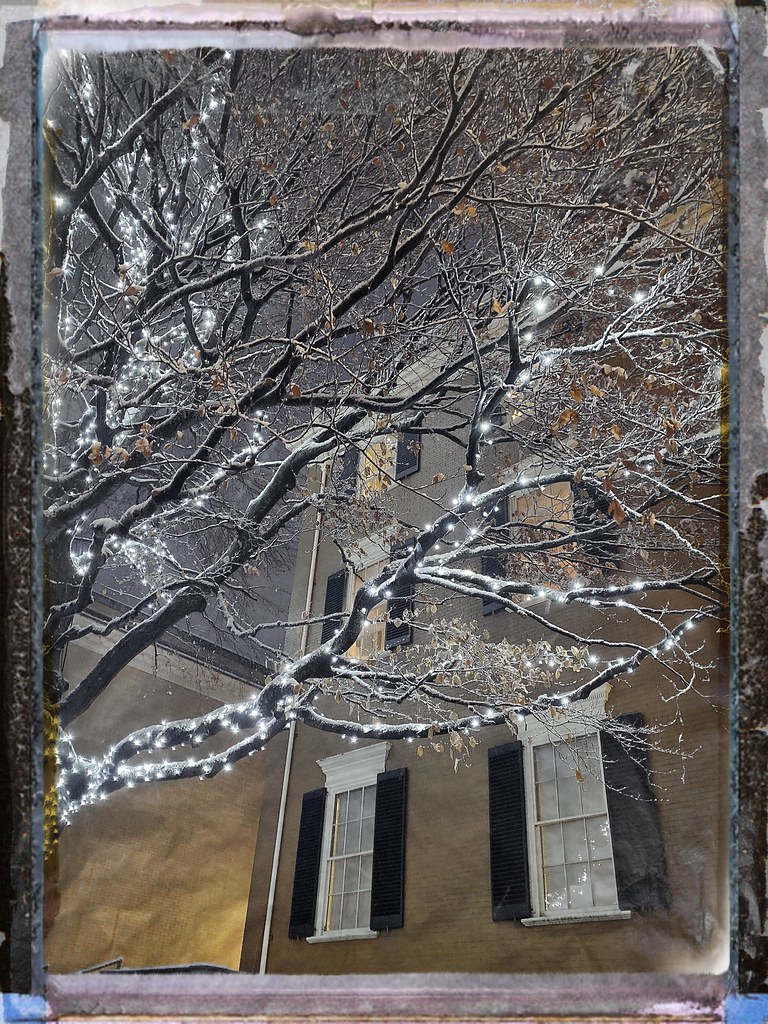 Winter Lights,”Portland, Maine by lydiacassatt
Apps used: I shoot with the app Hipstamatic and the combo is Stavros, Type 10 and Jolly Rainbow. The “film” is part of the new, Peel-Apart Pak, just released by Hipstamatic.
Backstory: I took this photo as a part of a series a few days ago during a blizzard in Portland, Maine. The city is richly decorated with LED lights that go up after Thanksgiving and stay up until March, bringing light and beauty to our dark, Maine winters.
I roamed around for two evenings, shooting some of my favorite parks and streets. This photo was taken outside the Portland Museum of Art. It’s a one hundred year old, Copper Beech tree; it is always a highlight of the winter to see this beauty lit up. 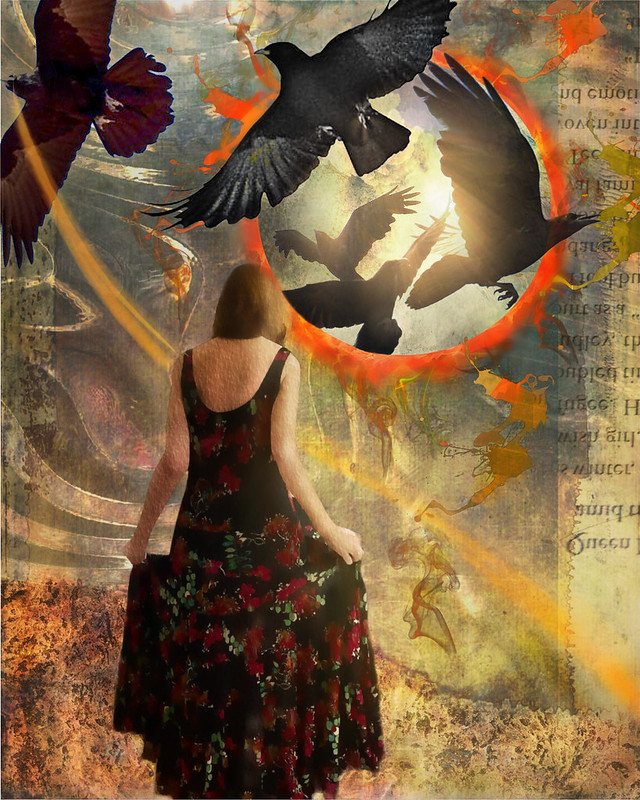 The Murder of crows imparts it’s wisdom
Apps used: iColorama, Stackables, LightBrush and Procreate
Backstory: I have always been fascinated by these dark birds which constantly surround us but still remain so mysterious. It is said that they speak to us and watch us, being very intelligent birds. So this image represents the oracle from which they emerge with their wisdom, but only if we are open to it.
Actually the background started out as an iPhone photo of a firework display blurred and distorted in IColorama with the glass preset. A Stackables filter was used to achieve the tone and textures I wanted. The woman is a self portrait taken with the iphonexs and a timer, and edited in IColorama. I created the oracle with a circle mask and a light texture from IColorama and added the sky and additional light inside with an inverted circle mask. Each crow was obtained online and applied individually. The clone brush in IColorama was used for the smokey flames and a procreate brush used for the “strand” of wisdom. IColorama textures were used for the ground. Text was blended in to suggest the written word. LightBrush app was used to bring additional lighting to the birds and figure.
I think the effect of light itself is important to suggest the mystical story here. I also wanted the figure to seem transfixed in the light caught up in the power of the surrounding birds. 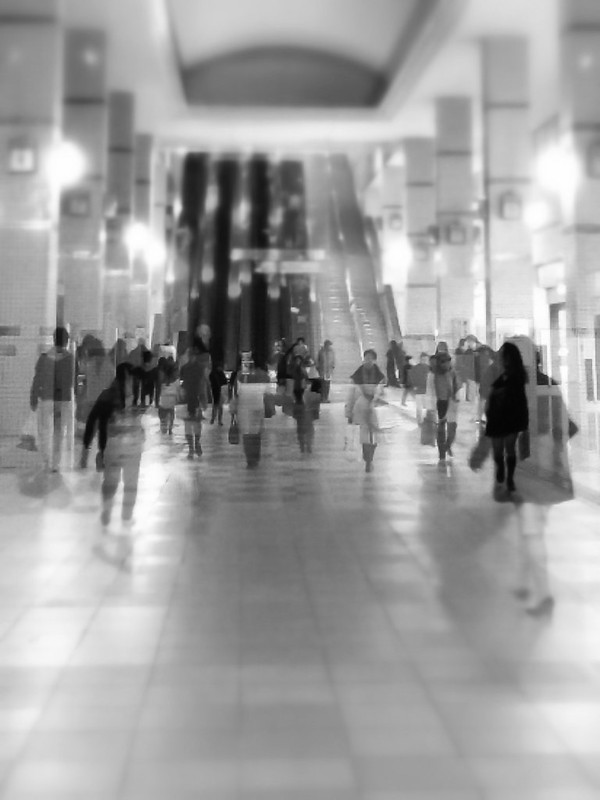 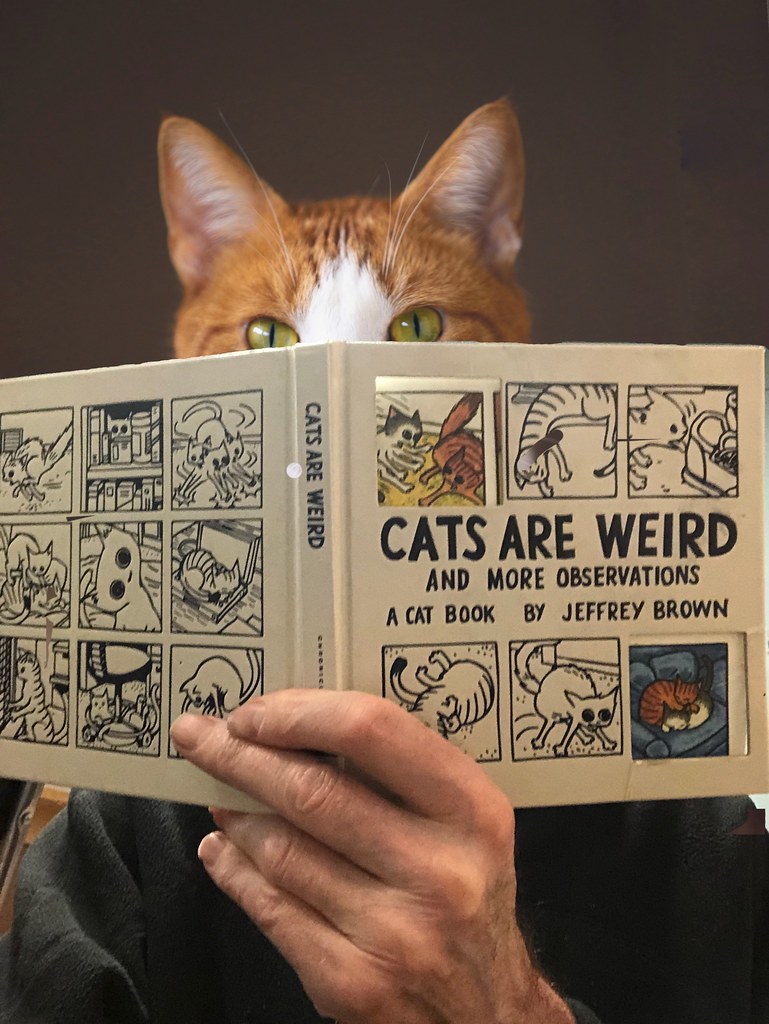 HUMANS EVEN MORE SO. aka The CATHOLIC by aka TMan.
Apps used: Unsplash (for cat pic), edited with Juxtaposer and Snapseed.
Backstory: Have a series based on books I’ve either read or their titles inspire me to express them vizually. This pic came about at My Kitty Cafe where I get to hang out with real cats in their surrogate home before going to new “cat givers”. I took a selfie holding a book from the cafe library with my iPhone 8. No cat was willing to pose for me at my moment of inspiration so I got my pic from Unsplash app. All layering and editing was done in Juxtaposer with a little enhancement of perspective in Snapseed to obtain near purrrrrrrfection.🙀