Still looking by Tomaso Belloni is our featured image this week.

Edited in Snapseed and Hipstamatic, the featured photo is an archived image rediscovered in Tomaso Belloni’s camera roll to express his feelings after one and a half months of lockdown at home demonstrating once again how photography, and particularly phone photography because of its immediacy, is an excellent medium for creative expression.

Rounding out the rest of the group this week are the following photographers and artists: 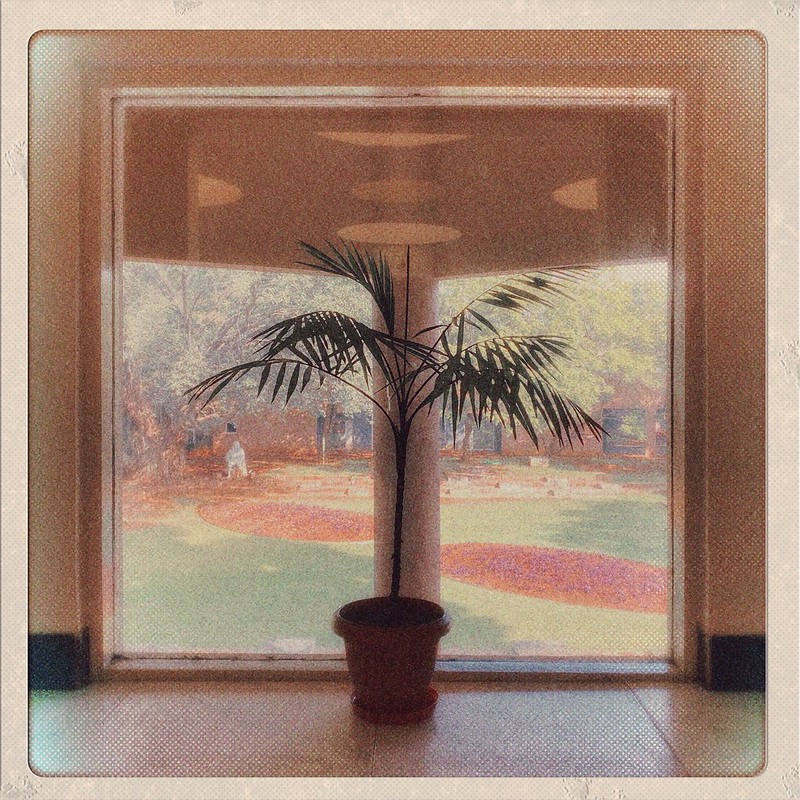 Apps used: I shot with the default camera app on an iPhone 11pro max and edited in Snapseed and Hipstamatic (Kutako Lens and Etosha 1907 Film).
Backstory: During the current lockdown I cannot go out to take photos and have to rely on the archive of older shots. I found some that can be interpreted in the light of current events. This low window opening onto a sunny garden, blocked by a plant and a column gives a good interpretation of one’s feelings after one and a half months blocked at home. 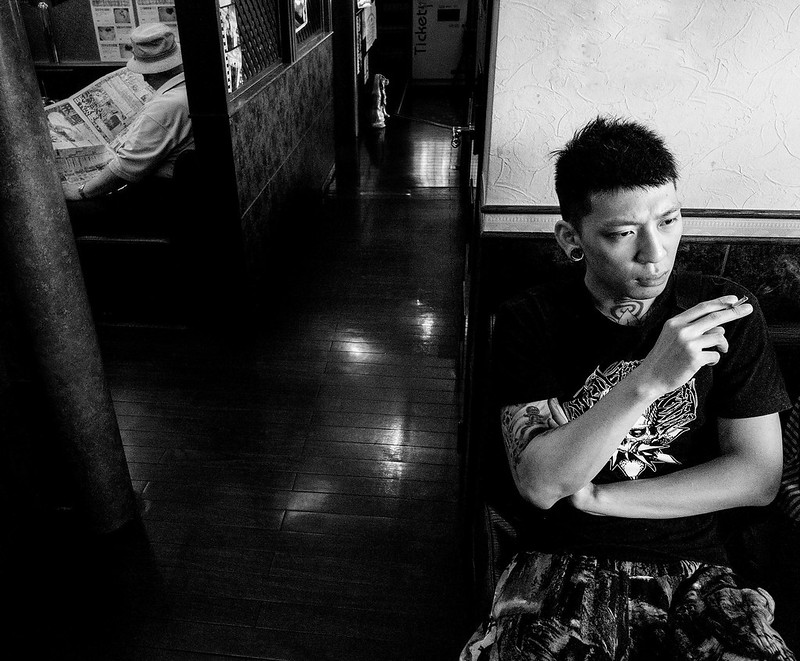 Backstory: Dr. Timothy Leary urged people to “turn on, tune in, drop out” to find one’s inner life and peace, and embrace cultural changes in a time of political and social unrest. Today, in a world wherein conflagrations of insatiable consumerism, fear of missing out and stress of maintaining one’s stance and identity are raging wild, some choose to cool off, chill out and cheer up following a teaching that’s 2500 years old. They get to stay peacefully in the coolness of Nibbāna (Nirvana) wherein the fires are absolutely blown out. May all stay cool!

The raw file was developed into jpeg in LightRoom Mobile and then dodged and burned locally in Snapseed. 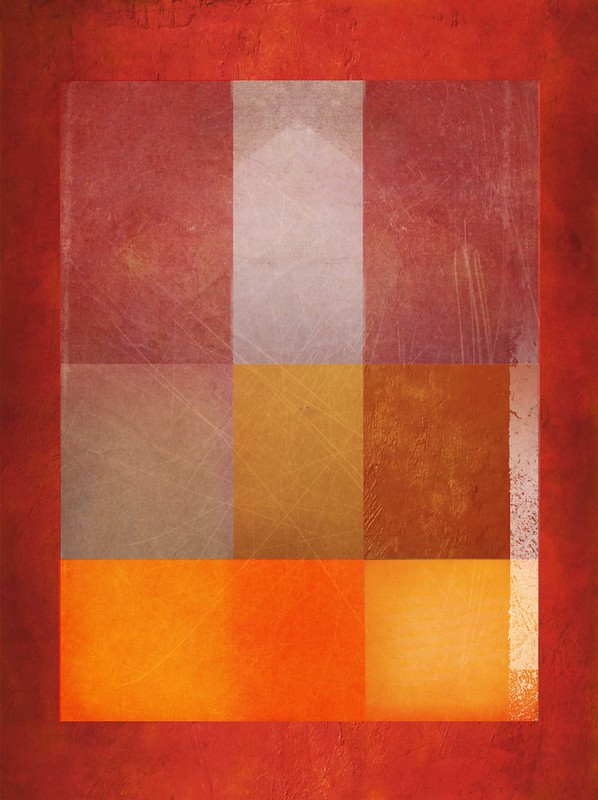 Apps used: iColorama, Distressed, Stackables, Retouch, Superimpose, Big Photo.
Backstory: Just prior to the full onset of the COVID quarantines I had begun a color study using simple red on red mixed with texture. But as the disruption of isolation grew into a new reality this became a series of pieces exploring how the virus was affecting our common notions of home and health and security. The deep red field became the quarantine’s circumscription, its frame disrupting and re-defining otherwise normally ordered life within its boundary 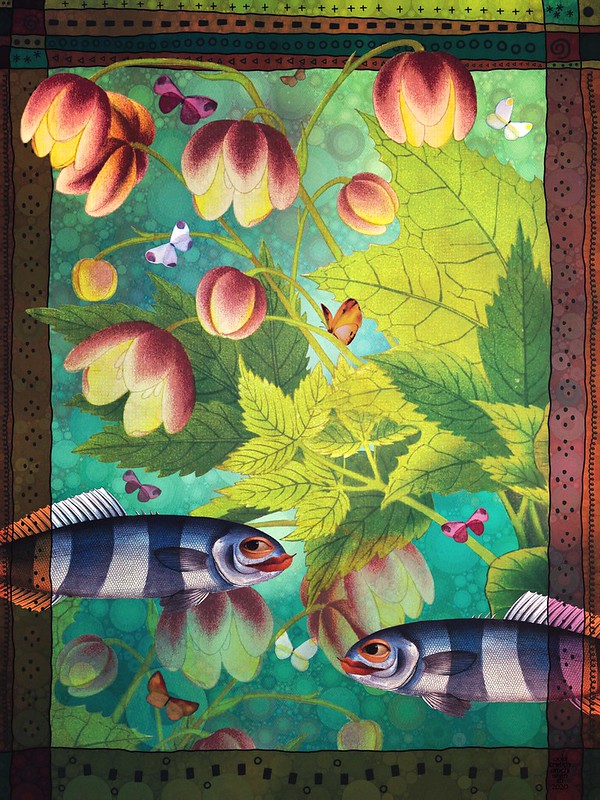 Apps used: Procreate, Percolator, Stackables
Backstory: I started this image because I fell for that striped fish. After adding the eye and mouth, it needed a companion. The image went on from there.

This composite asks the viewer to imagine looking out the window onto a street where fish fly through a terrestrial garden, or perhaps, awakening one day to an aquatic landscape through which both fish and butterflies move through the water.

The drawing, masking and compositing were all done in Procreate. I used Percolator to add the circle patterns to the background and frame layers, then back into Procreate to finished compositing. I then used Stackables for texture and to make color adjustments.

Apps used & backstory: [This is] a self portrait manipulated using texture and layers in Procreate then converted into black and white using Snapseed. 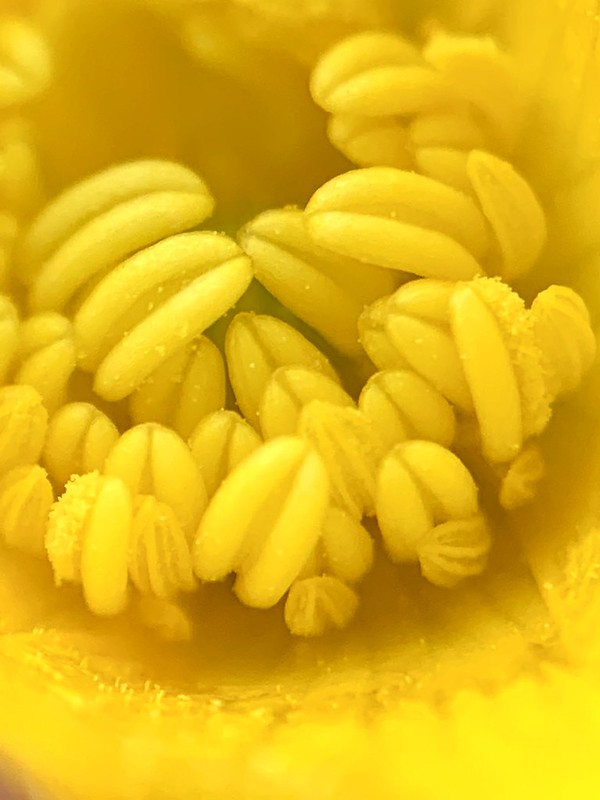 Apps used: only the standard image editor within the gallery on my iphone 10, but I used a basic (and very cheap) macro lens attachment to get in closer than the phones normal focal range.
Backstory: The buttercup was in my garden and obviously fitted the theme for the week – yellow. I don’t like picking wild flowers and it was getting quite late in the evening, the natural sunlight was fading rapidly. Without the extra lens, I coudn’t get close enough to get the detail, so the challenge was to take the photo, handheld, very close to the flower, in the wind, before the sun disappeared behind trees. There was minimal editing on the phone, just enough to improve the definition and contrast. 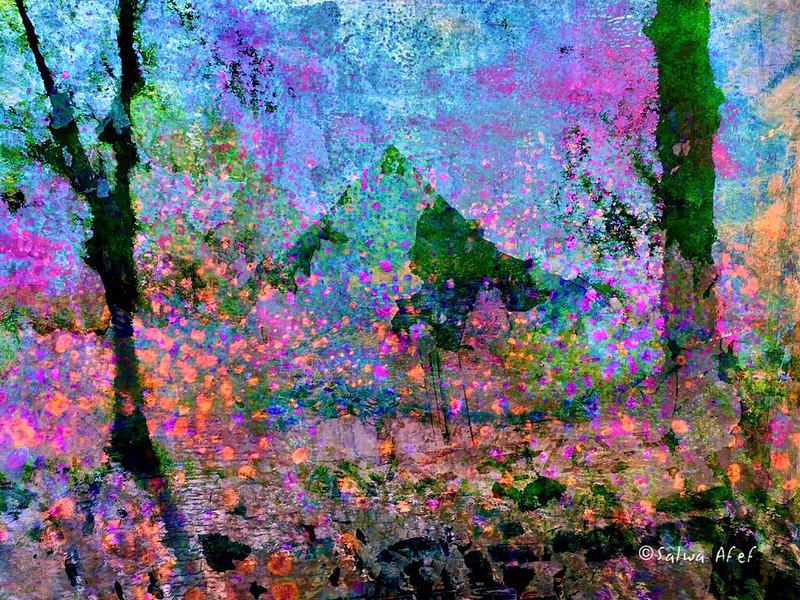 Apps used: Slow shutter cam + iColorama +Superimpose+ iWatermark.
Backstory: This photo is from the series ” Memories House”, created from the house photo I took on a” slow shutter cam” app, edited on iColorama then blended in Superimpose app with other textures I have made previously. 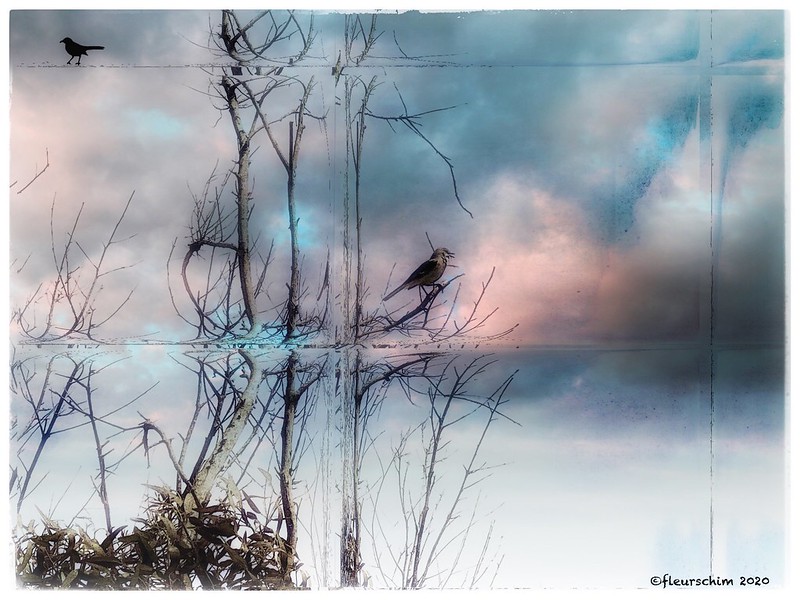 Time and again by Fleur Schim

Apps used: Slow shutter cam + iColorama + Superimpose + DistressedFX + iWatermark.
Backstory: This image began as a zoomed in capture of a bird in a tree. The bird was
singing away, and I was able to capture it with its beak open! When I began editing this image on my iPad Pro, I experimented with my favorite Snapseed filters ( Looks, Tune image, details, Glamour glow and Drama). It is amazing what can be created within Snapseed.
DistressedFX has a filter, “The Heavens”, which has stunning clouds. “Sky beauty”, another filter, has wonderful colors and textures that highlight any image. I tend to do a lot of blending with Imageblender. Finally, iColorama “Form” has “Tiles” to play with for the illusion of looking through a window. Last, I edited in DistressedFX, again, using the BIRD PACK “by the wire” to superimpose a solitary bird. 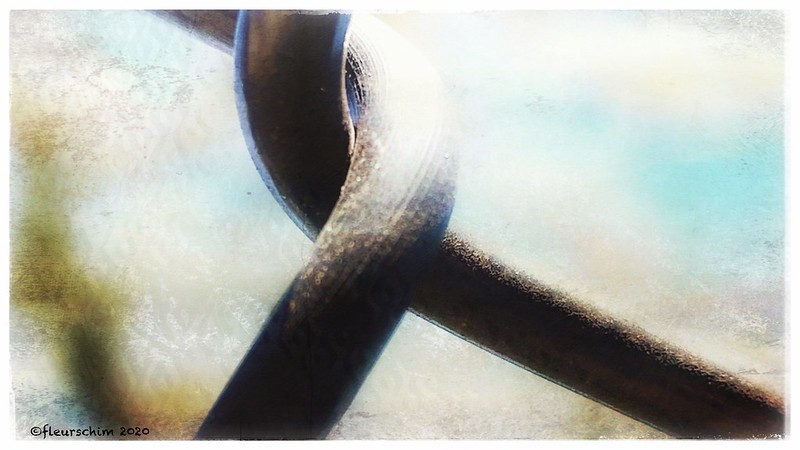 Apps used: Iphone11pro cameraplus2 Snapseed , DistressedFX iColorama and Imageblender.
Backstory: This image was created from a capture of a detail of a fence, that I see every day during my hike. It’s fascinating that something so common, something that I view, but do not necessarily register, is also an interesting art subject.
I captured this image with my iphone11pro with camera+2 app. The app was set on auto, and I increased the magnification for the close-up view. I began the editing process on my iPad Pro using Snapseed (Tune, details, glamour glow, and drama). Next, DistressedFX for background color, texture and more drama. Icolorama has wonderful textures and imagery in FORM. I played with GLASS, to get a sense of a repetitive fence in the background. Imageblender allowed me to get the best of many versions, until I was satisfied. 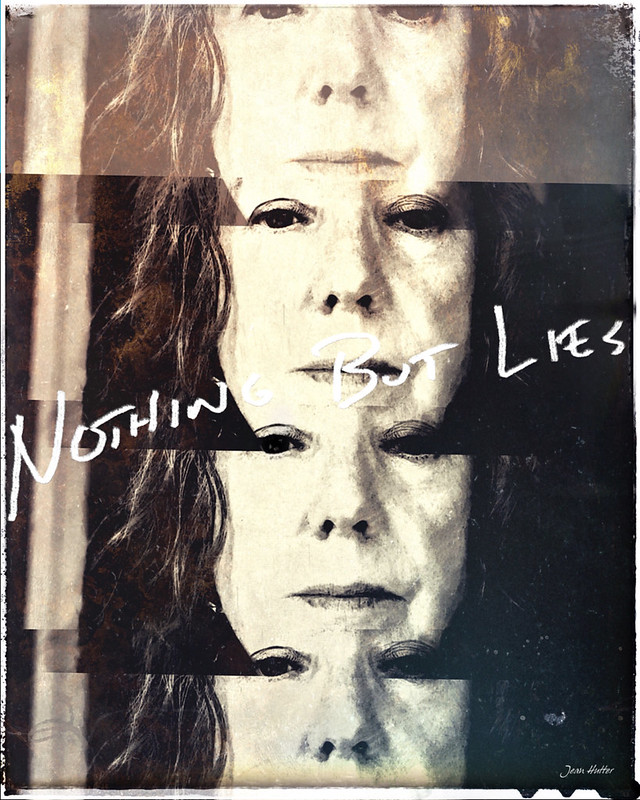 Nothing but Lies by Jean Hutter

Apps used: It is a selfie taken with my iPhoneXS. Then taken onto my iPad Pro and created with – iColorama, addLib S, Formulas and Pixlr.
Backstory: As I said this was a selfie and I ran it through addLib S and got the breakdown of the initial image. I stacked them in iColorama and played with a few settings. Next over to Formulas for some texture and then to Pixlr for some final adjustments and the frame. Back to iColorama for the text layer. 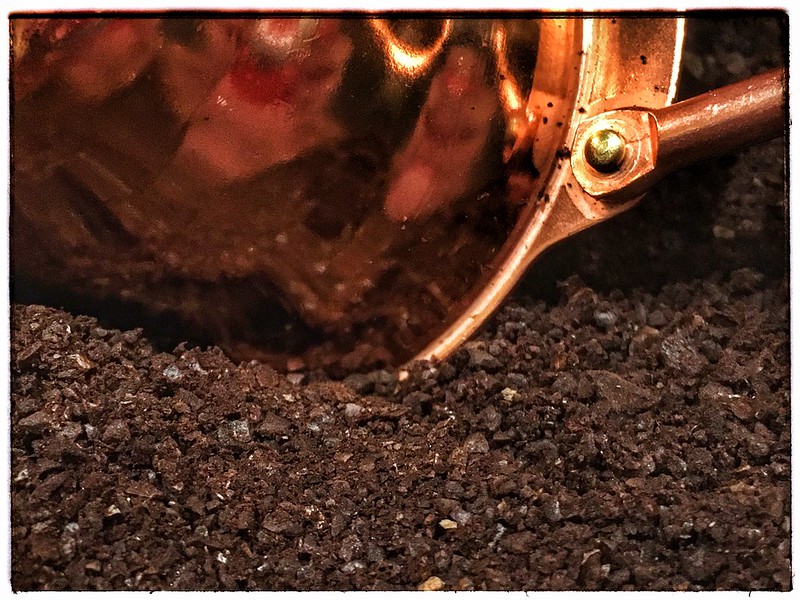 Apps used: iP6s with Camera+ 2 set to macro. Touched with Snapseed.
Backstory: This was a result of my looking at what I look at every day as I make my coffee. I make coffee in a French Press. This requires a coarse ground coffee, which I do my own grind with a burr mill. My preferred coffee is Sumatran, occasionally venturing to Brazilian, Kenyan or Kona. I also like my coffee a bit stout 😁