Welcome to the this week’s Apps Uncovered in which the theme of negative space emerged quickly in this week’s selection. Negative space is the area around or in between objects or subjects in an image; the actual objects or subjects defining the positive space. Keeping the photo simple and introducing a lot of negative space around our subject can be a great way to create a tension between the subject and it’s surroundings, ultimately creating a more impactful image – and, of course, our subject can be space itself, even dark space as illustrated in Tomaso Belloni’s feature spot image this week, Down Down. Tomaso’s subject is the dark, fearful space at the top (or bottom) of the steps suspended masterfully by the leading lines toward this space. Will we take this journey? Where will it lead? The lines draw us in reinforcing the message that we must take this journey and face the consequences. Many of the images this week, but not all, use negative space to reinforce the subject matter. By eliminating distracting elements, the attention is focussed directly onto your subject giving a clear message to the viewer about what is important in your photo.

Rounding out the rest of the group in this week’s Apps Uncovered are the following iPhoneographers:

Have a great week shooting and editing and look forward to seeing next week’s gallery.

Important changes to the group:  It is a real pleasure for Bob and I to pour through the weekly gallery of your images each week. We love reading about the stories and techniques behind the images and then sharing the best of them with the world. This can take a few hours to put together, and can even longer when image-sharing is disabled on a Flickr member’s images.

Turn on IMAGE SHARING:
Therefore, to save time, we have decided that images that have image-sharing disabled turned on in their settings will no longer qualify for possible inclusion in the weekly selections. We will also be posting this message on the Flickr group. 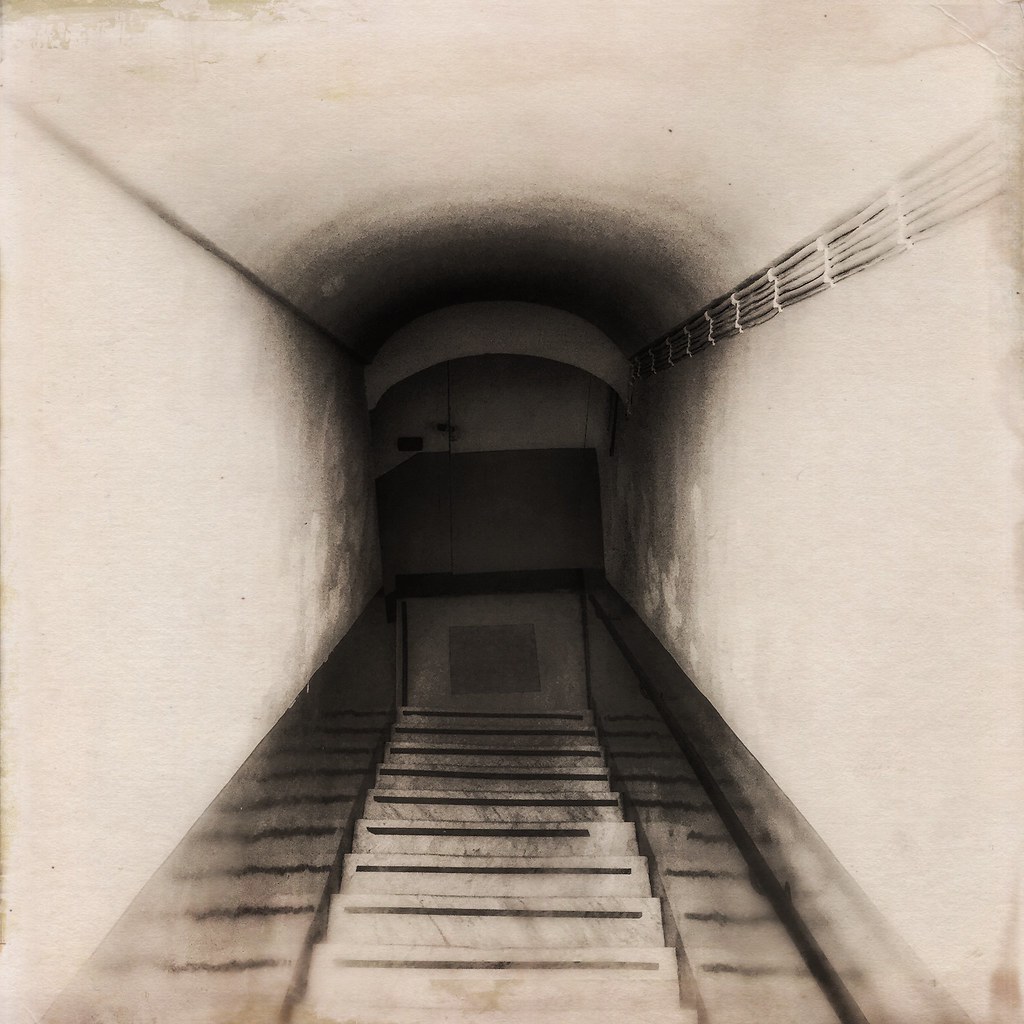 Apps used: Shot with the iPhone 6 default camera, processed in Snapseed and Hipstamatic (Smith lens and Uchitel 20 film)
Backstory: DOWN DOWN is a narrow staircase in a bed and breakfast in Sicily. An example of something people see every day without really seeing it. I loved the reflections of the steps on the wall and the slightly askew landing. 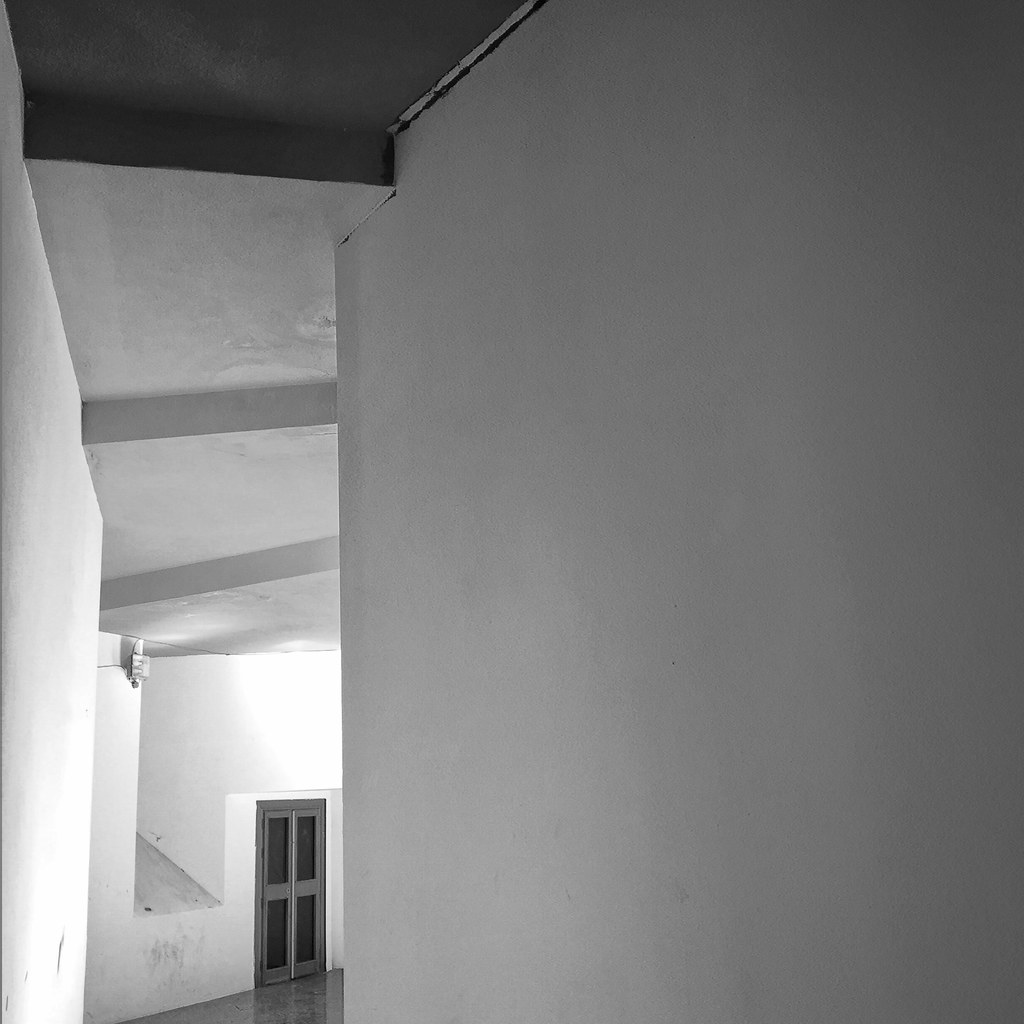 Apps used: Shot with the iPhone 6 default camera, processed in Snapseed and Hipstamatic (Muir lens and BlacKeys XF film)
Backstory: A modern building in Cefalù, Sicily. It was evening and the gate was closed, so I had to stick mu phone through the bars to take the shot. During the day the light was different. The lonely door at the end of the large wall seemed to be the only hope left. 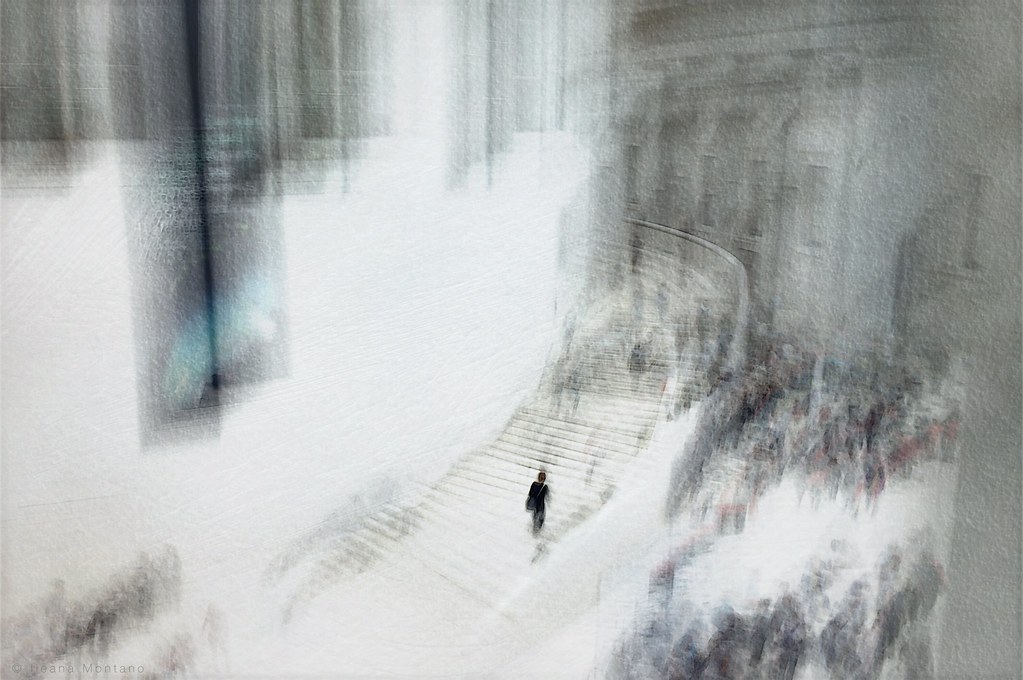 Apps used: iPhone 6 native camera, Snapseed, iColorama, Union and Formulas.
Backstory: Of Light And Space 10 is part of a series of images inspired in the overall feeling and impression of experiencing spaces from a different perspective, trying to focus on that feeling, we all have experienced at some point, of being very small and overwhelmed by the dimensions of our surroundings. While I was pondering about it, this solitary character caught my attention. There he was, standing out from everything and everybody else, moving from one side to the other of the room with an absolute domain, and suddenly he didn’t seem small to me at all. On the contrary, he immediately acquired a significant relevance in the scene, which I tried to emphasize even more through contrast and texture in the edit.the background like frozen cliffs. Then a man, huddled in his winter clothing and hunched over from the cold, appeared from a side street and walked the length of this long, huge block wall. The bent solitary man, the vacant look of the imposing wall and the cold city all contributed to the starkness of isolation. Hence the title: Alone in Winter. 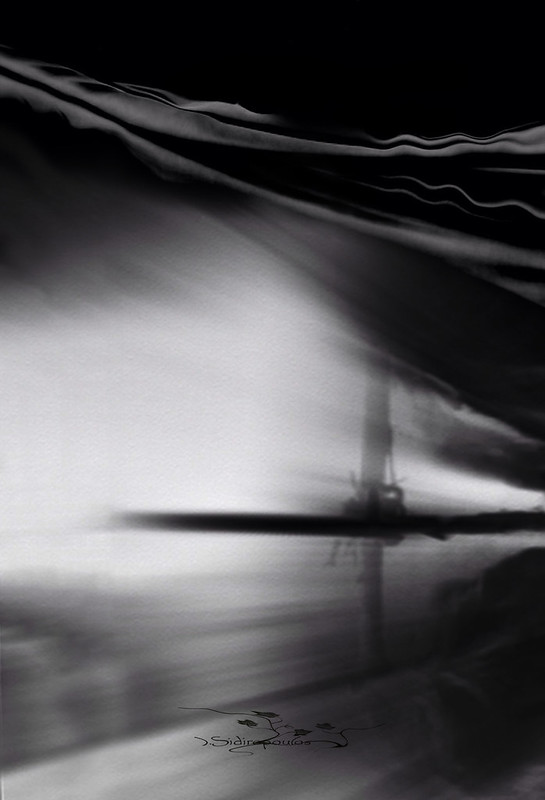 Apps used: took the photo of the cross with the app Hypocam with my iphone5s which is amazing for black and white shots and all the tones of grey scale that I adore. The apps that I used for editing were Filterstorm PRO for blending the layers such as the fabric on top and to the right side and I used horizontal motion blur with the app Photowizard..and Snapseed.
Backstory: I wanted to create a cross so I did with [pieces of ] wood and because of my dark ambience of the moment I wanted to create something very deep and this was the result to make people think that there’s darkness behind religious and other thoughts generally that keep us chained…

Apps used: I used the native iPhone 5c camera and Mextures.
Backstory: I was going to Blick’s for art supplies, and there was this art installation that I’ve tried to get a picture [of] (that I like) for years. This time it worked. It’s a quirky, controversial piece, and I love it. And it makes people look up from their phones. 🙂 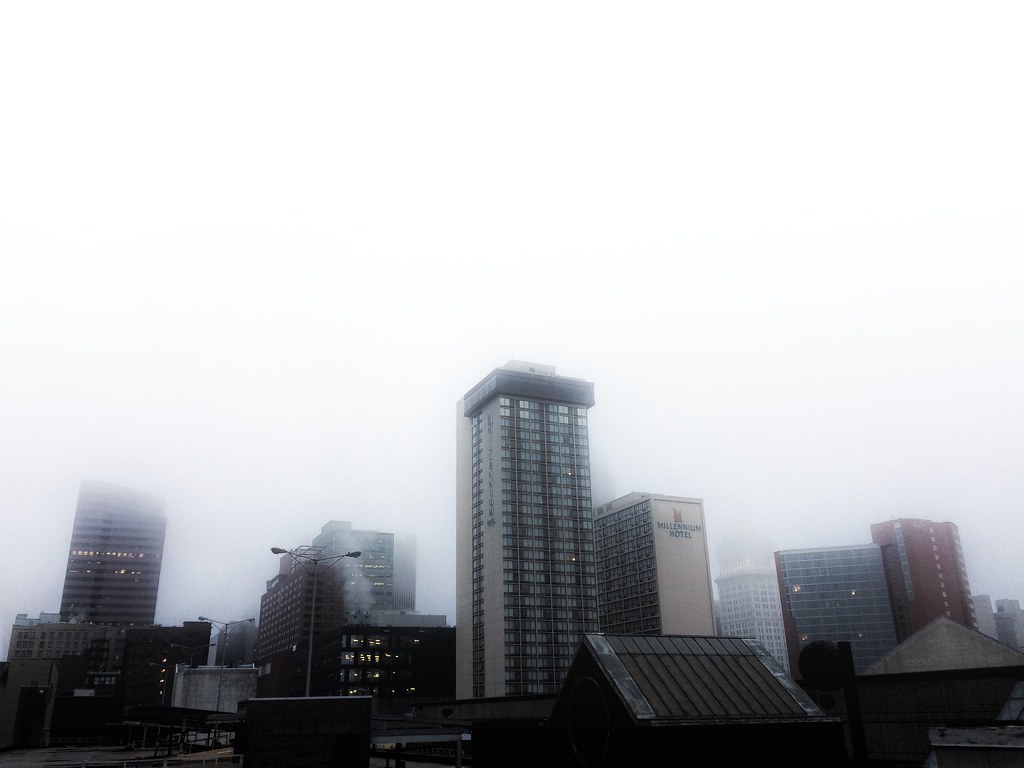 Apps used: Snapseed, TouchRetouch and Blackieapp
Backstory: Edited in Snapseed to crop and make minor tweaks. I used TouchRetouch to remove an annoying light spot on the image. Then I put it through Blackieapp – it was quite new to me and this image was one of my first attempts using the app. 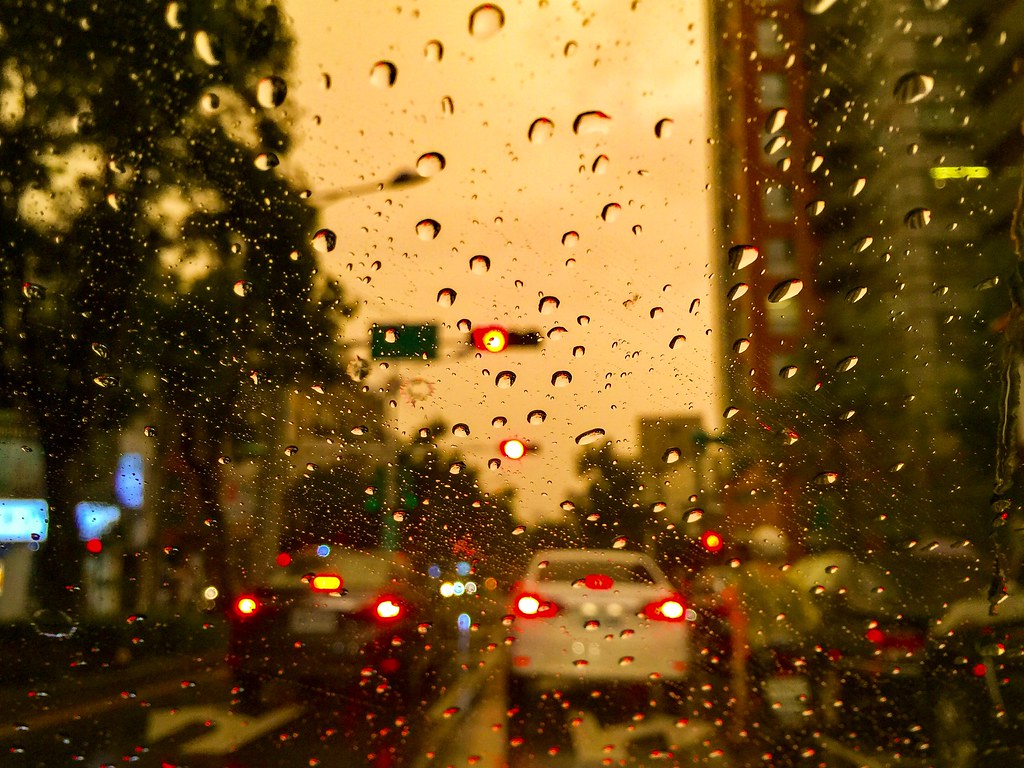 Apps used: Photoshop Express
Backstory: September 13th 2016, the day just before super typhoon Marenti, which CNN called it the strongest typhoon of the year, hit Taiwan, it was a sunny beautiful day～By the evening, I drove to Carrefour to buy some stuff preparing for the typhoon, it was still a bright day. But when I drove out of parking garage, not only it poured outside but also the whole sky and clouds became yellow！All I could see became yellow! Very bizarre scene! It seemed like the whitebalance went wrong, color tempture got too low. In other words, I felt like I was in a certain picture, but it was real! Real World! I tried to capture that bizarre scene and color, but I was sitting in the car, so what I could to is to take picture from the window. At first, I felt a little bit depressed becaue I didn’t think it coud capture what I saw, but in the end, the picture is better than I thought～: 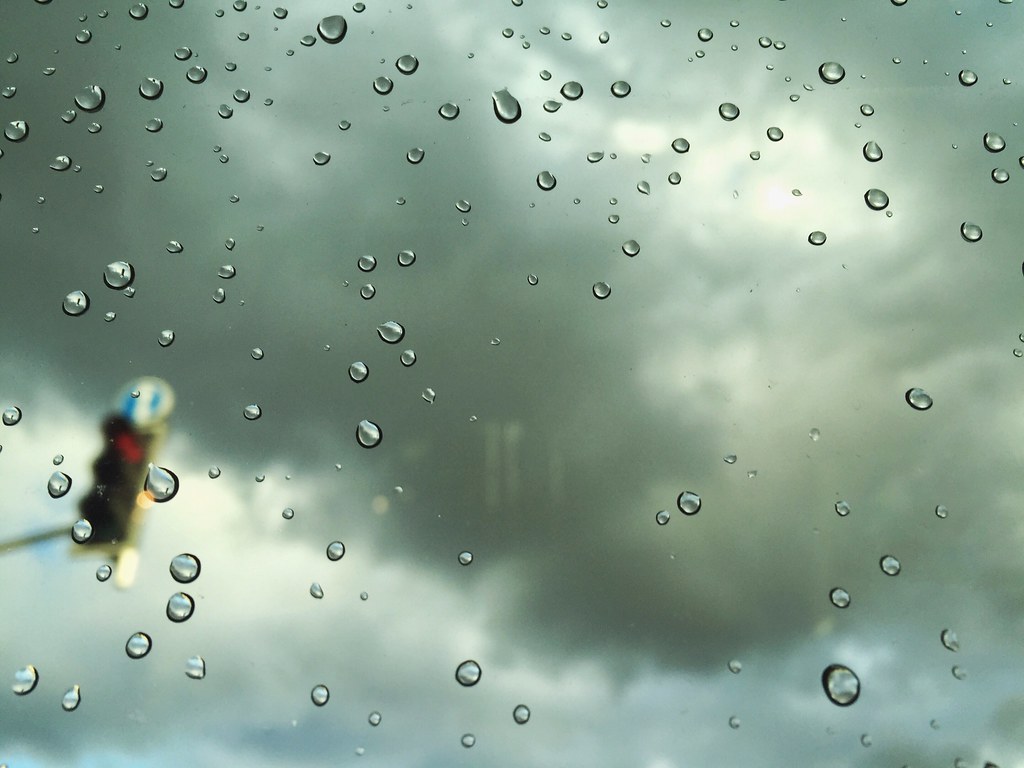 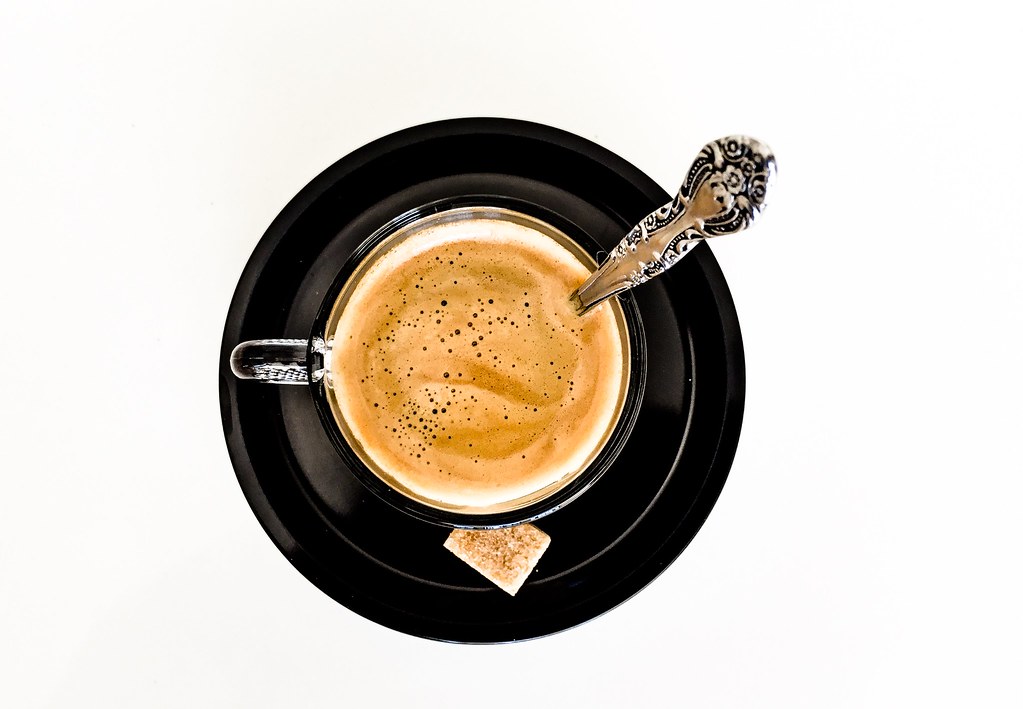 Apps used: I used Lightroom and PixLr apps.
Backstory: The background is a white floor tile. 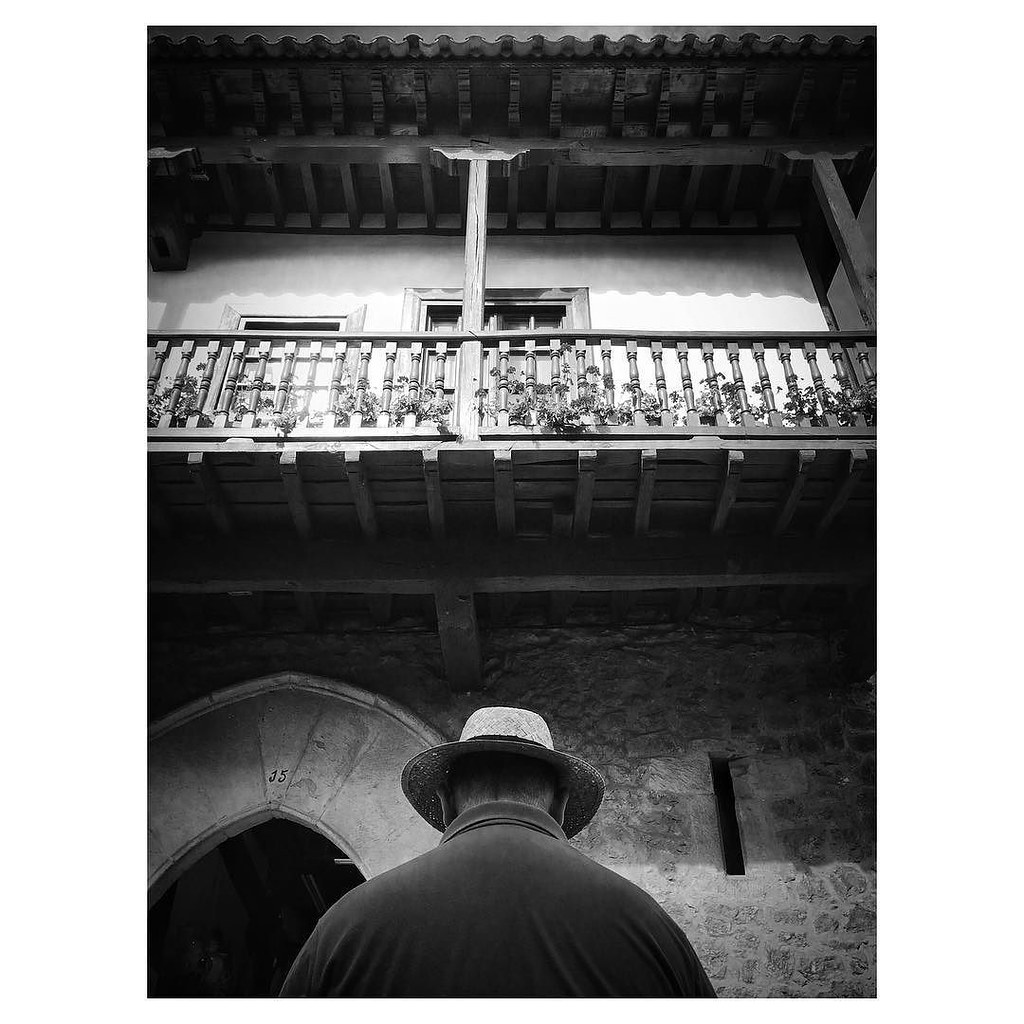 Apps used: The picture was shot on my iphone 6S, using Hipstamatic (Jane lens + BlacKey Supergrain film) and the used Snapseed to crop.
Backstory: Two weeks ago, my wife an I went to Santillana del Mar, a lovely village in the north of Spain. While we were wnandering around the main street, I saw this man with his hat, standing at a higher part of the city, and bowwing his head downwards. I liked the scene of his bowing head in the front and a typical old house in the background. I shot and moved away. 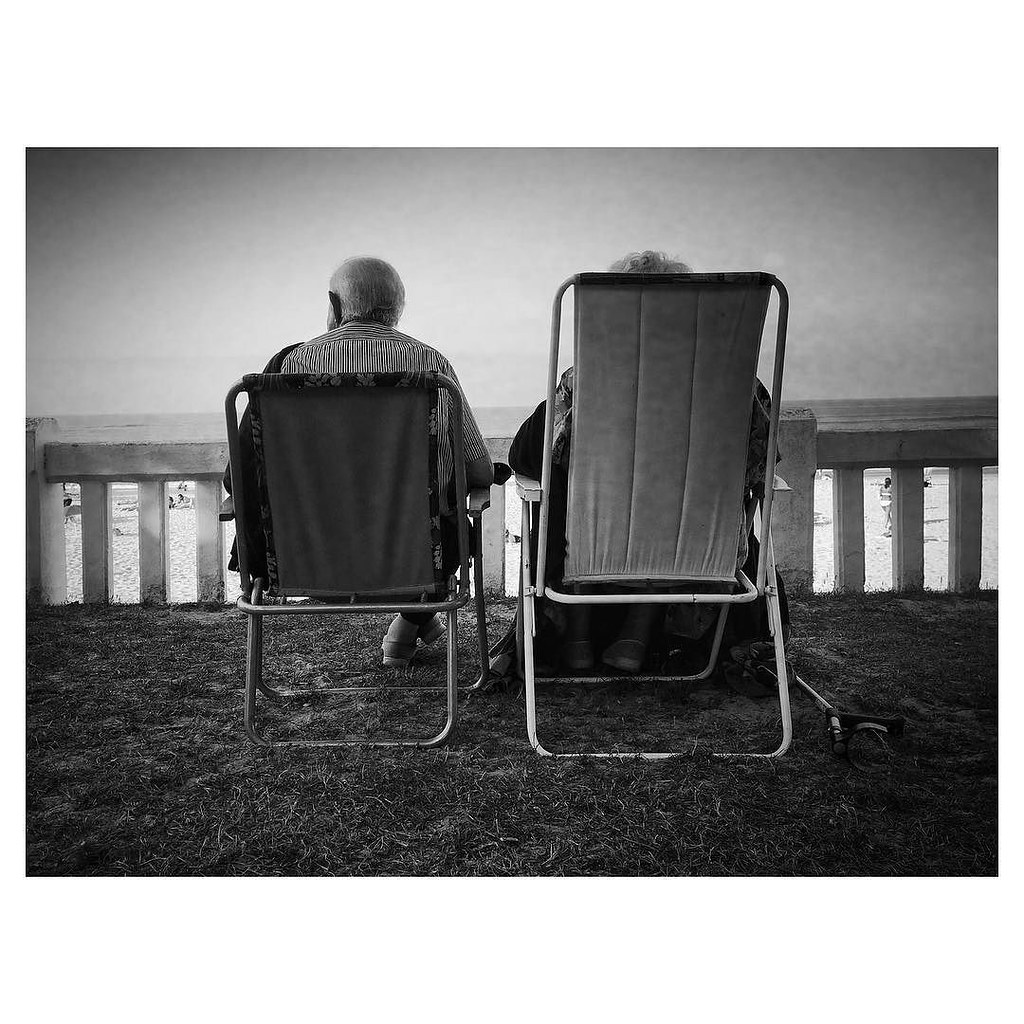 Apps used: The picture was shot on my iphone 6S, using Hipstamatic (Jane lens + BlacKey Supergrain film) and the used Snapseed to crop the frame and lighten it up a bit
Backstory: Same story as the previous image. This time we visited Comillas another lovely village in the north of Spain. While we were wandering around the boulevard in front of the beach, I saw this old couple sitting on the grass, watching all the people that were on the beach. I thought that´s the way these old people spending their time, watching other people´s lives. They seemed to be at the cinema, hence the caption. I liked the scene very much. I shot and moved away.

Apps used: I shot with my iPhone 5c and converted to bw with RNI Films.
Backstory: The big story here is that I love my new purple ottoman and my new reading lamp. I am truly a homebody and enjoy being here. Especially with autumn arriving. It’s is my favourite season. I just think this scene very welcoming and cozy.