This week’s defining words for me would no doubt include, somber and sobering.
Ten miles. That is the distance between myself and the story of 17 others cut short unexpectedly. [A reference to the 17 who perished in the high school shooting in Parkland, Florida. – Ed.]

Most of us go through life living each day as just another ordinary day. Yet, in an instance our worlds can be shattered. While some of us might find ourselves living with a sense of security, many globally are made aware of this day after day.

Despite our differences, we share the universal tales born of the human experience.
We who share this lovely blue planet all have the same basic human needs.

We all have stories to tell. Sometimes we see/hear our own in the telling of another.

I have long been a fan of the backstories here on IPC – Glimpses into the eye/mind of photographer/artist and their process. So for my first feature here on IPC I couldn’t help but find a story line in this weeks featured work.

Through the face of others, if we look close enough, we might find ourselves wordless. We aim for hope swinging on nostalgic journeys searching for some flights of fantasy. Moments of clarity during winters walk, we realize what we think to be might not truly be.
At the end of the day we are into and out being another face in a crowd. But all of us, in dark days, welcome the simple joys…like cute cheery images of cats.

Our leading photo is part of a series by Erik S Lieber. I found it a celebration of ones DNA. An embracing of his family history. A delicate and beautiful homage to his family.
He has provided links to this ongoing series. I invite you to please take a look see. 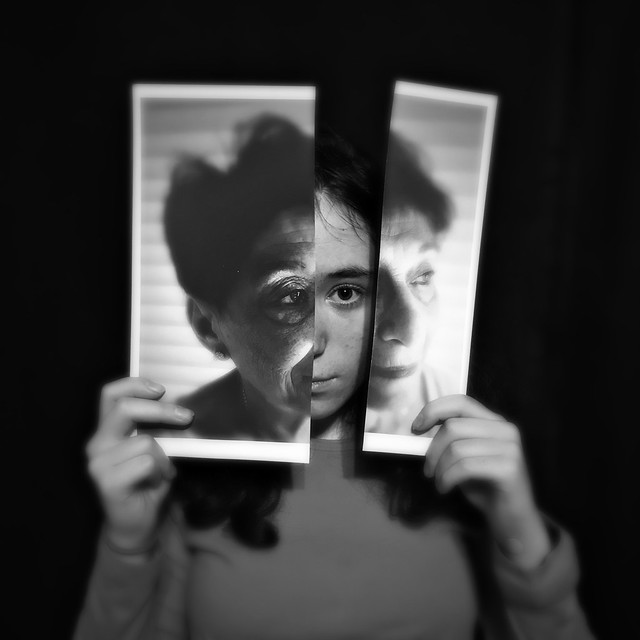 This image was created using the Hipstamatic app. I photographed and edited it in Hipstamatic. I used the combination of Sergio (lens,) BlacKeysXF (film,) and TripleCrown (flash.)

Backstory:
This series is based on an image I created that was part of New Era Museum project. My task was to juxtapose something living with something not living. That image was of my daughter holding a split photograph of herself, she being the living thing, the photo being the non-living thing. Upon reflection, I decided that the idea could be expressed more clearly if I used an photograph of my mother, who passed away in the summer of 2016. I expanded the project to include images of my father, who died last October. I have taken photos of myself and my kids with pieces of photographs of my parents. I will continue the series using photos of my grandparents as well. I want to explore both visual and emotional similarities and connections.

Here is a link to the series so far: 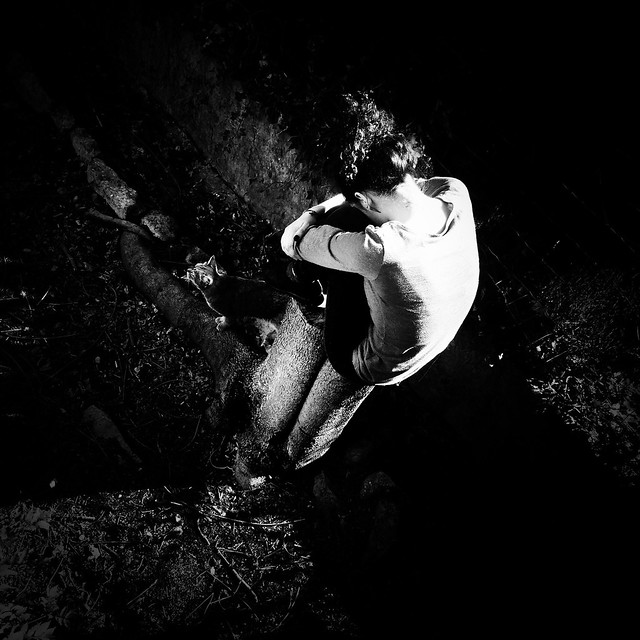 During a shooting session, my little cat, Lilli, invited herself in the frame. I think she made the scene more interesting.

“Hope” is the thing with feathers –

That perches in the soul –

And sings the tune without the words – 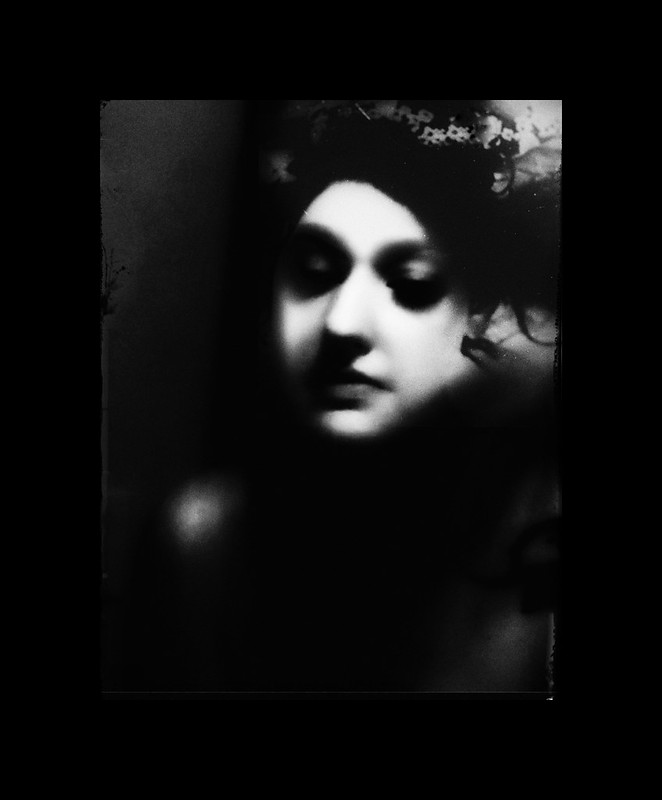 I woke at 4am one morning. Not being able to go back to sleep, I grabbed my mobile. I began by creating a black canvas by taking a picture in the dark. I tweaked it in Snapseed to get the blackest blacks possible. I then took it to Superimposed as the background. Looking through my files I found a family picture at a birthday party taken a couple weeks ago with an iPhone 7. Our friends were crowded around the table taking a video-chat with their grandmother in New York. I took one face from the group, but she had a flower in front of her face. I edited her in Snapseed and took her to Superimposed and merged her to the black canvas. I then grabbed anther file of a model I shot at a fashion show and put her in the foreground working the two together. I didn’t know at the time where it was taking me. When I reached the point of feeling it, I saved it to my photos and took it back to Snapseed. It was around this time when I got a text from a good friend, she had learned that her granddaughter was rushed to the hospital. The piece began to take on new meaning as I worked its final image. The poem and the work was given to my friend and her granddaughter turned out to be fine in the end.
Diane Powers 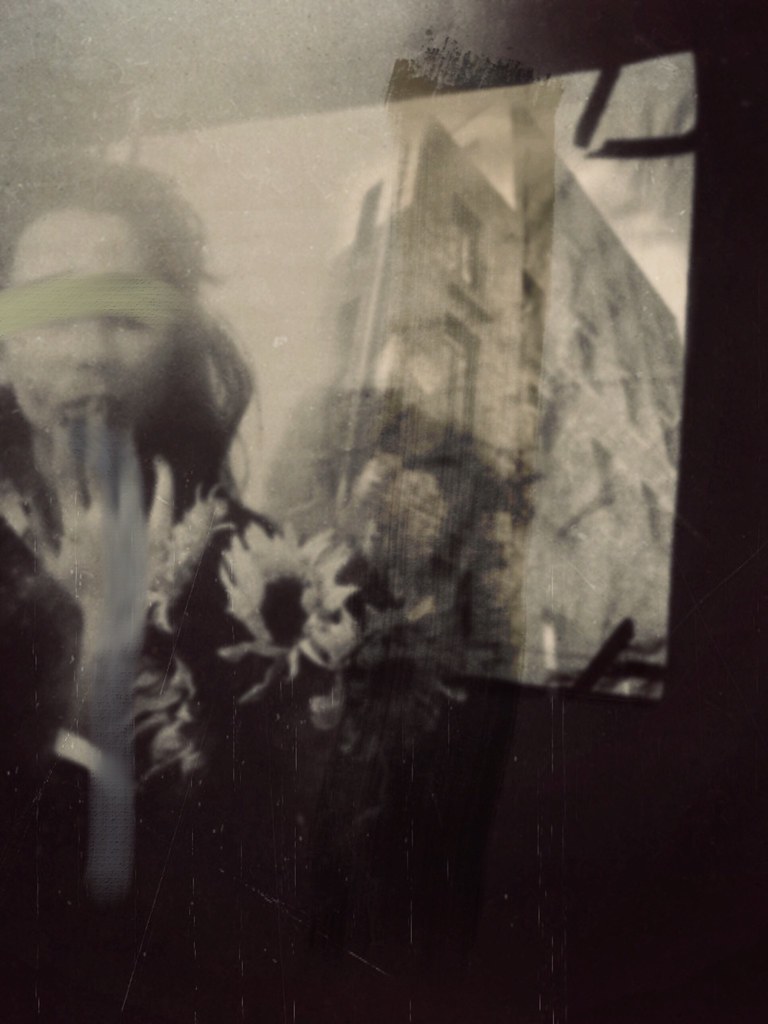 Backstory: this is a self portrait taken and edited on an iPhone 6S , being part of a series I have shot back in 2015. I edited the photo in PicsArt and Pixelmator adding the final touch of tones , lights and shades in Snapseed. I was inspired by a bouquet of sunflowers I have bought one brightly warm late November autumnal afternoon . I took the self portrait in the room while my son was playing around and I then layered the image previously shot that is an image shot in the historical center of the city I live in. I was once more concerned with the mood that the motion of a memory can acquire once the moment is already gone. 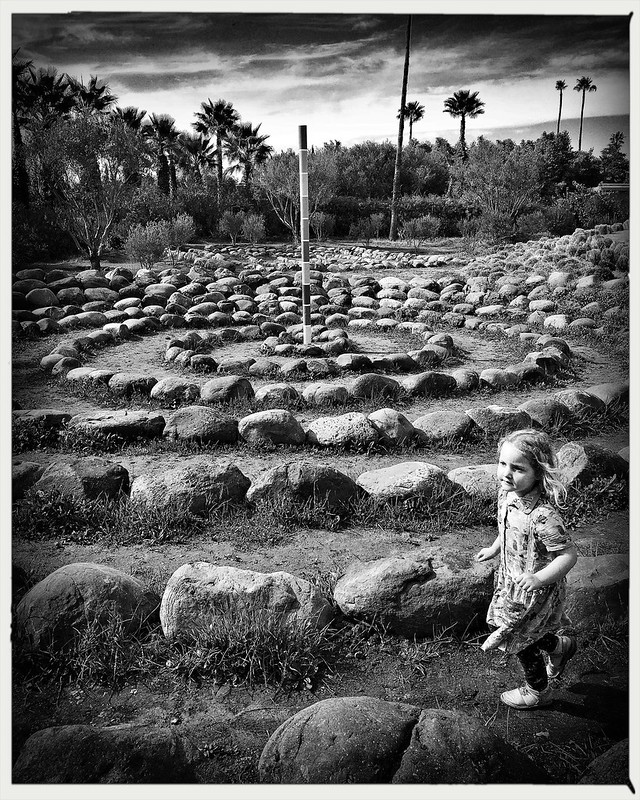 Backstory:
The place you see is part of the beautiful garden ”Anima” by Andre Heller, close to Marrakech… a beautiful place full of fantasy and tranquility. 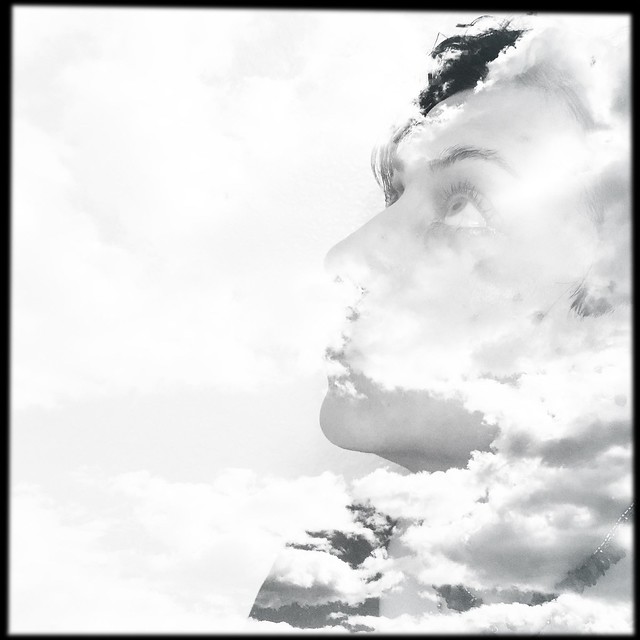 Backstory:
This photo is part of my 365 Project! This year I have decided to get back on this project but solely using Hipstamatic. Each week, I choose a different combo and do my best to find interesting (or not so interesting) subjects to photograph.

This shot was taken on a beautiful day where the puffy clouds were dominant all over the sky. I chose to do a double exposure shot of the clouds and my face. Since I cannot take flight physically, I can take flight mentally. 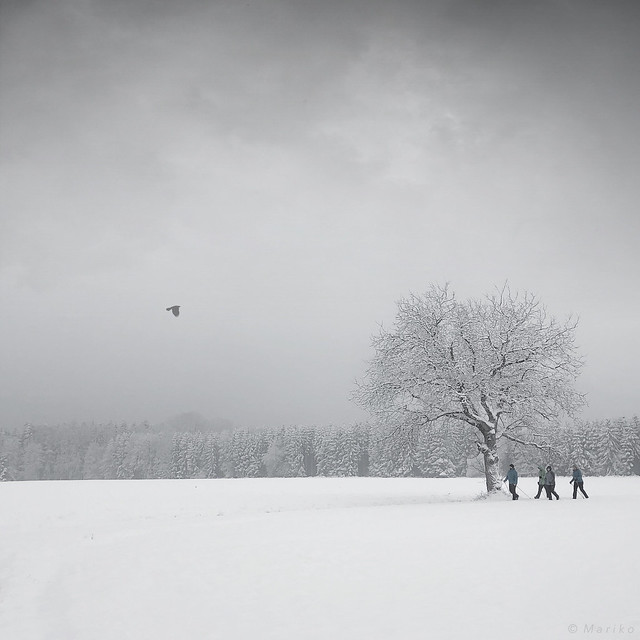 Backstory:
Last week it finally snowed in the lowlands of Upper Bavaria in Germany. It was the first real snow this winter, so I was excited to go out and explore the snowscape. On the way to a forest a group of 4 ladies passed by. They were having a lot of fun and enjoying the scenery. I waited until they were about to pass the tree and took this shot. 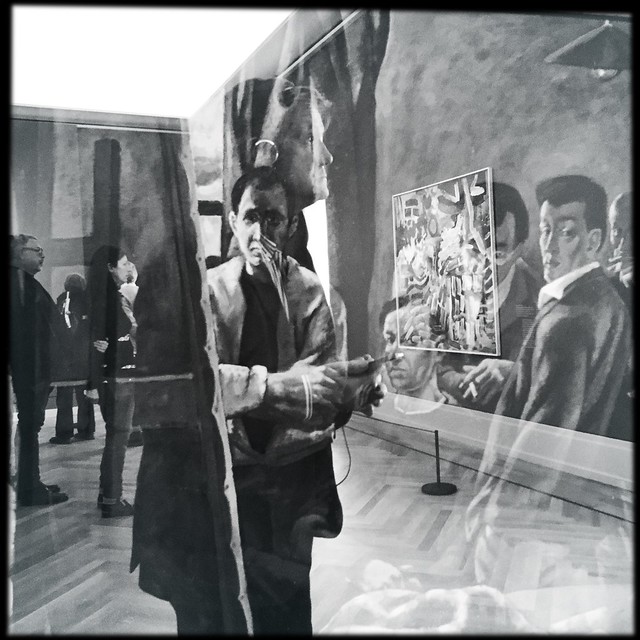 This shot was taken with Hipstamatic as a double exposure with madalena lens, blackeys44 film. Using the shuffle function resulted in this black and white combination.

Backstory:
I was at the Barberini Museum in Potsdam experimenting with double exposures in which I took a photo of a painting and then aimed the camera at a person or people. The results are varied and it takes many shots to get one I like. In this case, the people in the painting seemed to slip out and meld with the museum’s visitors making the whole scene look like a painting. 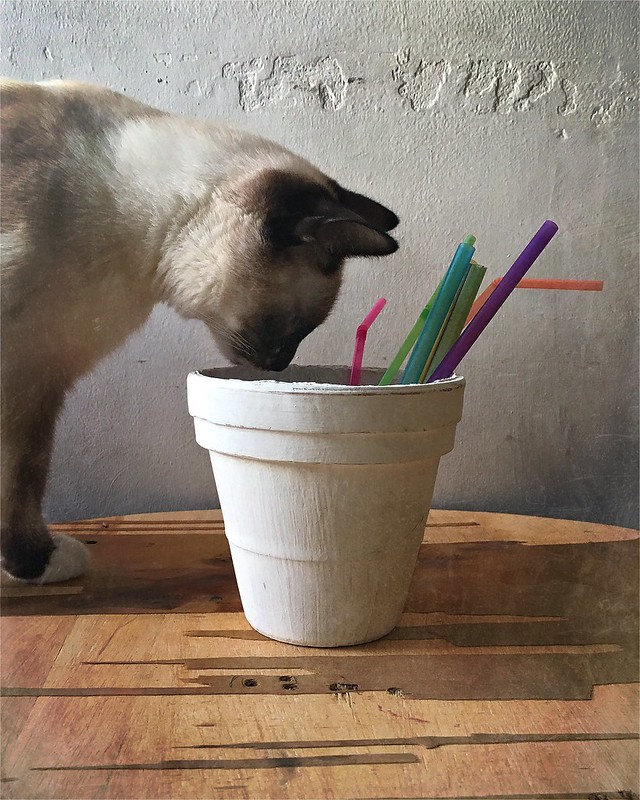 Picture taken with iPhone 6S and edited with Hipstamatic.

Backstory:
This picture was not planned at all, i had planned the set to shoot the white pot with the colored straws against the white wall, when suddenly my cat Aghata jumped on the table and began to smell inside the pot, so I decide to let her snoop around a little and make some photos.
Omar