Welcome to this week’s Apps Uncovered which is dedicated to the beautiful and courageous woman Carolyn Hall Young who sadly passed away yesterday. Carolyn’s work regularly appeared in our Apps Uncovered gallery – and I have featured one of my favourites below – but so much more than that, she was such a dedicated and positive member of the creative iPhone community. Carolyn’s wonderful work, particularly the extraordinary portraits she created for hundreds of people will live on and I know that these images she loving created for folks have touched the lives of many. Carolyn will continue to be a great inspiration. – Thank you so much for sharing your gifts and gift with so many of us. I would like to end with a message Danny Wu posted on Facebook:

“I celebrate Carolyn! She was an amazing person and artist. She was a light in this world and was able to capture it in her work and life.” Danny Wu 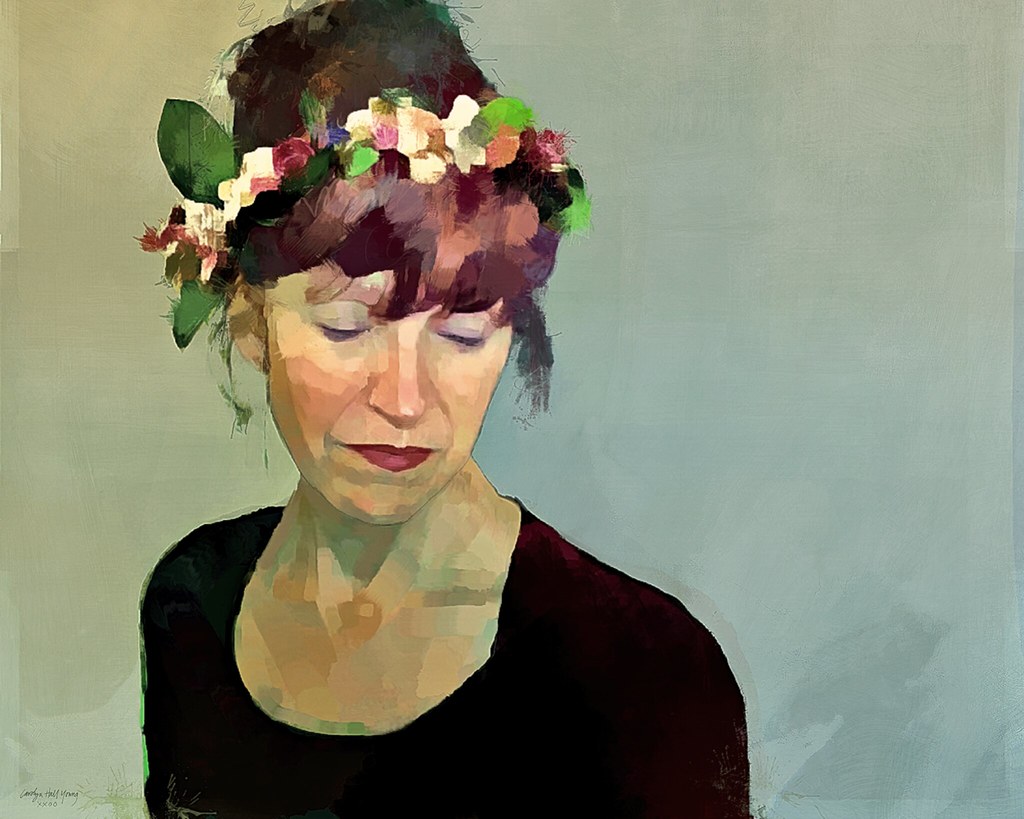 Apps used: iColorama
Backstory: This is an iPad painting, made with a beta version of iColorama. I used two of Robin’s images, as sources to make this.In iColorama, I started with Brush>Paint, and blocked it out, as an underpainting, then Brush>Rebound, and some of the flat brush, in Bristle, some Shatter, and some Explode. There is some Lineal in the background. I did a significant amount of work with the color, with a number of brush masks. I make the textures, and keep them on hand.

…..and so to this week’s Apps Uncovered and Christmas well wishes from Bob Weil and I here at iPhoneography Central. Thank you all again for making Apps Uncovered such a great weekly pleasure to look through. It is great to see what amazing techniques and creative images you come up with. Of course Bob and I are regularly creating artwork ourselves. I love to play with apps and explore their potential, often starting with a photo taken with the Apple camera or Procamera and then transferring it to my iPad to do further editing. This week, I spotted a beautiful and gentle moving image by Giulia Baita. and just had to try it out for myself. You can see how I created this image below just for fun by using the apps I have listed underneath.

Apps used: The shot was taken with Slow Shutter Cam and then given a median blur using the app BlurFX keeping the centre of the photo free of blur. Next, I added a vignette and selectively lightened and darkened parts of the sky using Snapseed. I added the water and snow with Color Lake and finally added the text using Vont.

Backstory: This shot was taken from the first floor of a department store through a window where there is a great view of Weymouth Town Centre’s Christmas ice-skaters. The picture straight out of Slow Shutter Cam looked a little cold and lifeless so I brought it to life by contrasting light and dark areas and adding the fake snow. It’s just a bit of fun really. Below are my last selections for 2016 with Bob Weil finishing up the year with his selections next week. This week, Sandra Becker claims the top spot in our gallery of iPhone images with her stunning and creative portrait, the “Celestial Snow Maiden”. Notice how the woman’s icy stare is framed beautifully by the surrounding elements like the ruffles on her shoulders, the soft curtains of hair and the much stronger element of the flower on her head. I also love the way that the eyes are picked out in the colour blue which contrasts nicely with the bruised reds on her face. The image is beautifully crafted presenting a deceptively simple yet stunningly effective result. Sandra makes great use of one of my favourite painterly apps Procreate which features an abundance of editable brushes and multiple layers. Procreate is available on the iPhone and iPad and is an essential tool for anyone who loves to mix things up a bit! Rounding out the rest of this week’s gallery are the following iPhone artists and photographers: vadim demjianov, Andrew Lucchesi, Elsa Brenner, Jake, Tomaso Belloni, borisbschulz2009, vondav, francesco x, Cecily Marieke Caceu, Shelby Bell, Randy Samuels, Julia Nathanson, eric simard and Mariko Klug. If you would love to know more about compositing images and the more creative side of mobile artistry using apps like Procreate, Superimpose, iColorama and Snapseed you may be interested in my recently released course “Adventures in Mobile Artistry” currently 50% OFF Click here to find out more… If you’d like to see your images in the running for selection to our weekly Apps Uncovered feature, be sure to list the apps you used to create your image when you upload it to the iPhoneographyCentral Flickr group. (And as an added bonus to other members who would love to learn from your successes, consider adding the “Backstory” describing the creative process that led you to capture and process the image as you did.) Thank you all for sharing your wonderful images on our iPC Flickr group. Don’t forget to make sure you have photo sharing turned on in your Flickr account settings! Wishing you all a great iPhone shooting and editing week! Thank you to everyone who submits to our weekly Flickr showcase. If you would like to be considered the weekly gallery, join our iPC Flickr group by clicking here. 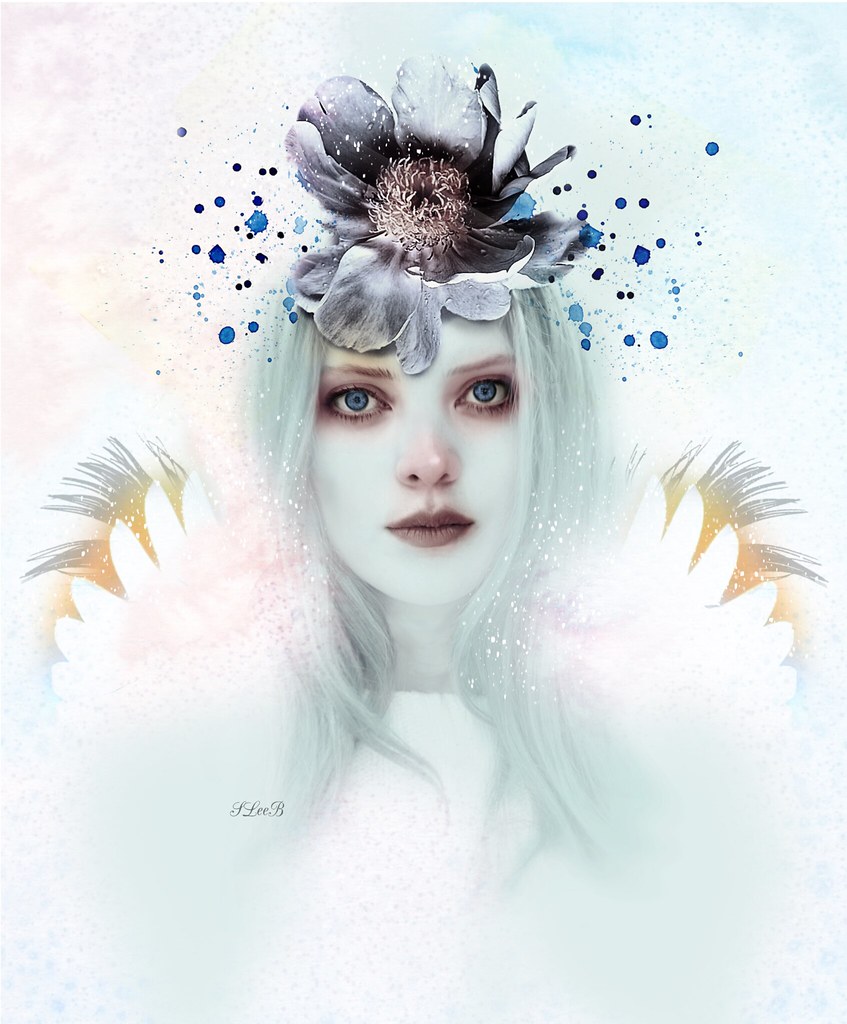 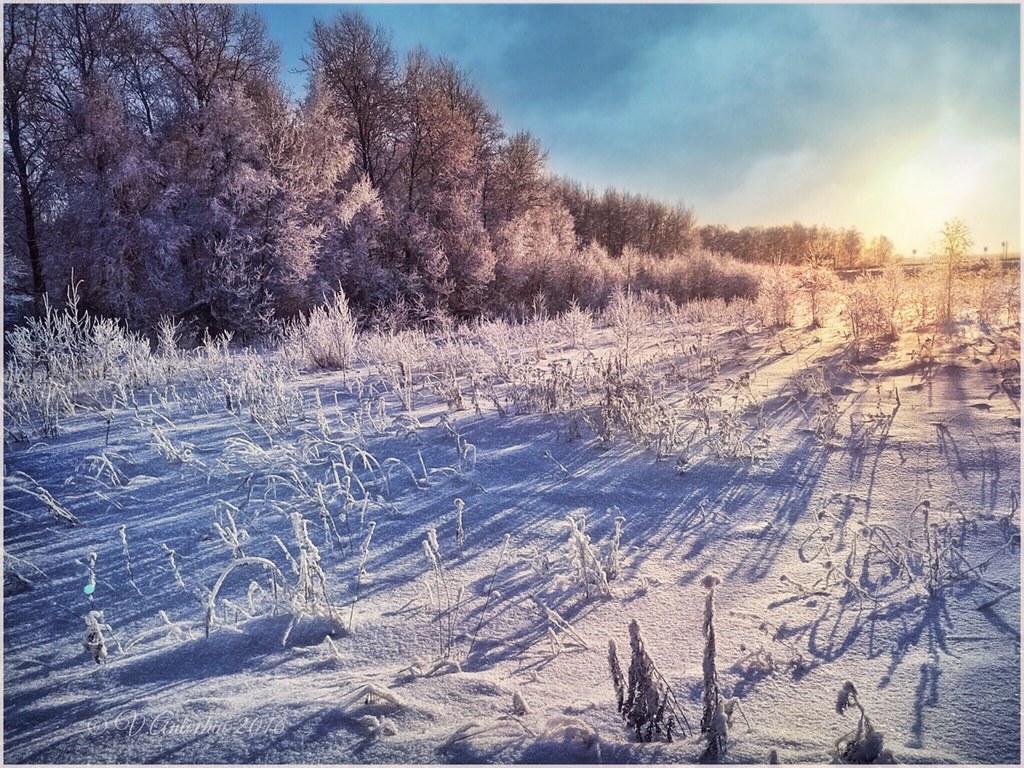 Apps used: Shot on my iPhone6s,processing Snapseed and iColorama. Background: The picture was taken in one of the rare sunny days in the rural outskirts outside of my town. 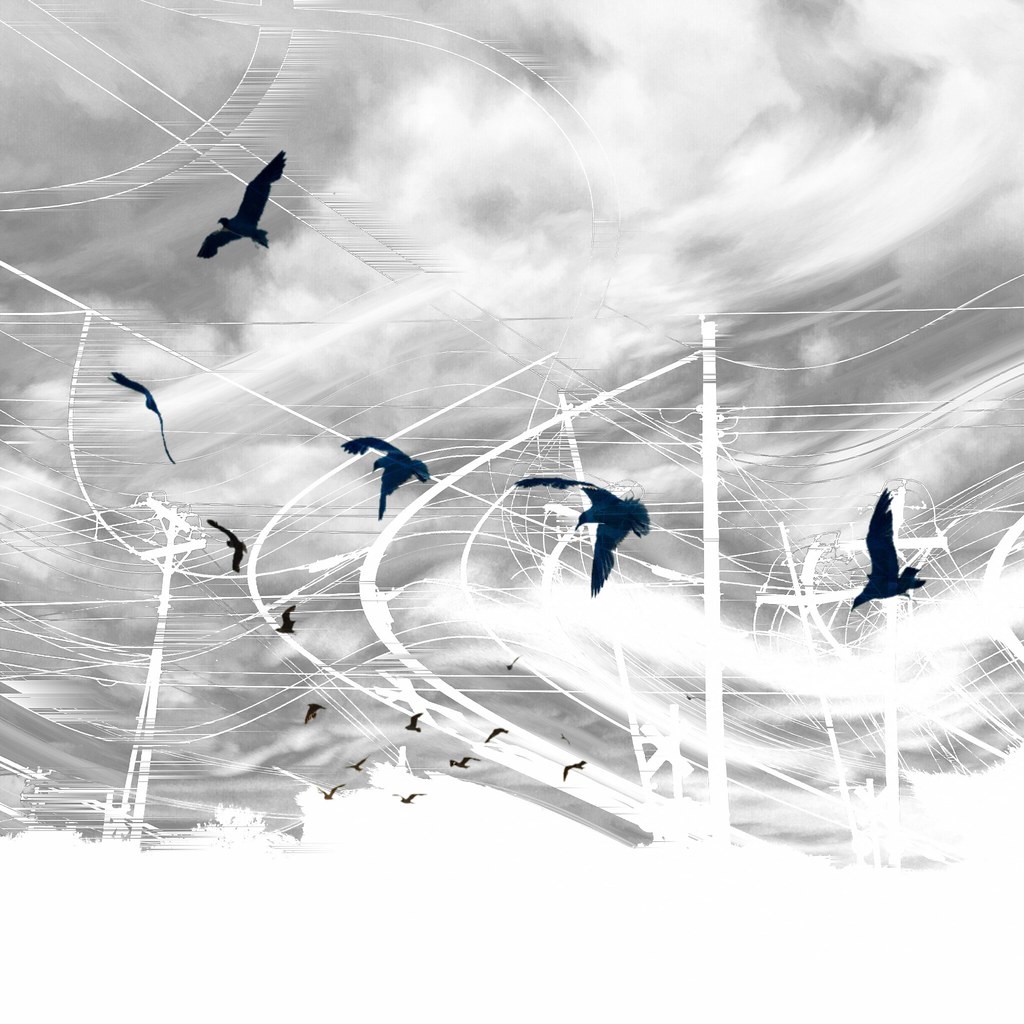 Apps used: iPhone 6 Plus, Decim8, Superimpose, Enlight, Image Blender. Backstory: This is a composite image of two photographs I took several months apart. The background image is a recent photo of power lines that I ran through Decim8, which had the effect of reversing the image colors and creating swirling and motion effects. I took two “Decim8ted” images of the power lines that I liked and combined them using Image Blender. The foreground image is a shot of seagulls I took in Port Aransas, Texas about a year ago. I used Superimpose to mask the background and exported the image of the birds as a PNG. I love to try and capture moments like this, as it’s a challenge to me, to get the feel you want. 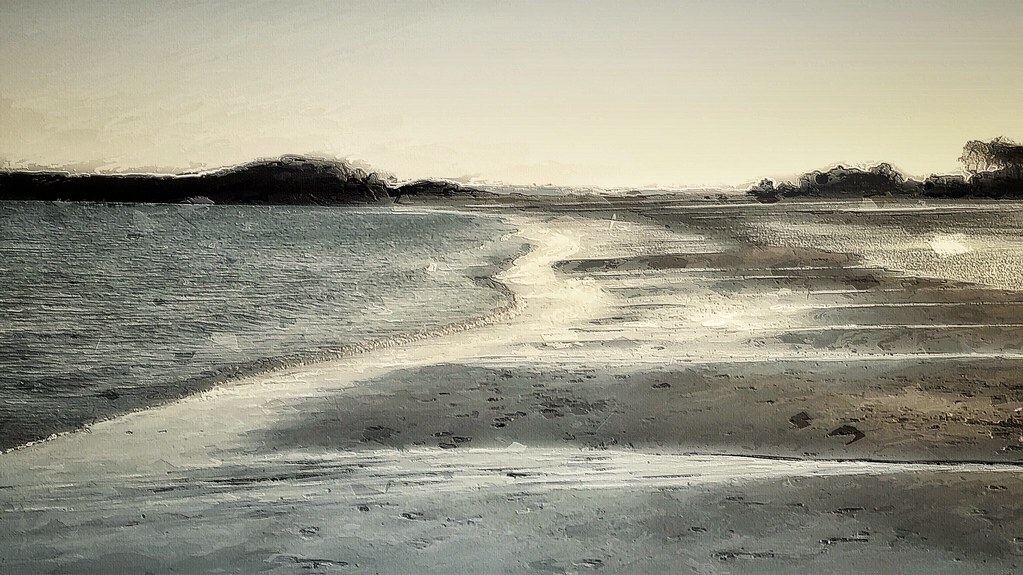 Apps used: Glaze Background: I used the app Glaze to bring out the texture of the beach and water and rocks in the background. It is best seen fully opened up. Joe Rosenfeld Center (JRC) | Cesar Pelli Architect – Grinnell College, Grinnell, Iowa. 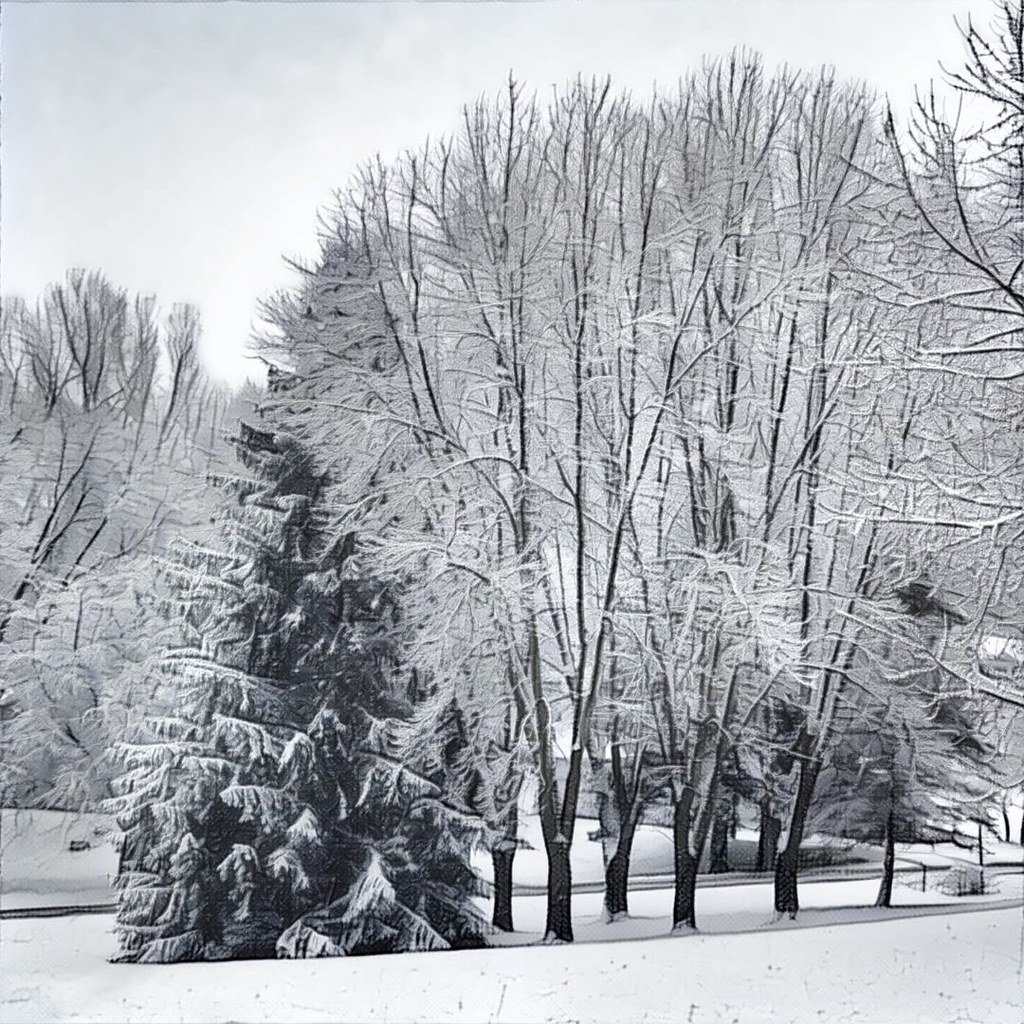 Apps used: Shot with iPhone 7 Plus. Edited with Snapseed and Prisma. Backstory: This photo was shot on my iPhone 7 Plus about a block from my home and the first, wet, heavy snow of the year was sticking to the trees. I walk and drive by this location every day and with the way the light was hitting the fresh snow, I thought it looked like a great moment to capture.   I edited to give it a little more sharpness and less saturation in Snapseed and then got the square format and “painted” look from playing around with the different filters and strengths of those filters within Prisma. Feel free to contact me with any further questions related to this photo and I appreciate the recognition. 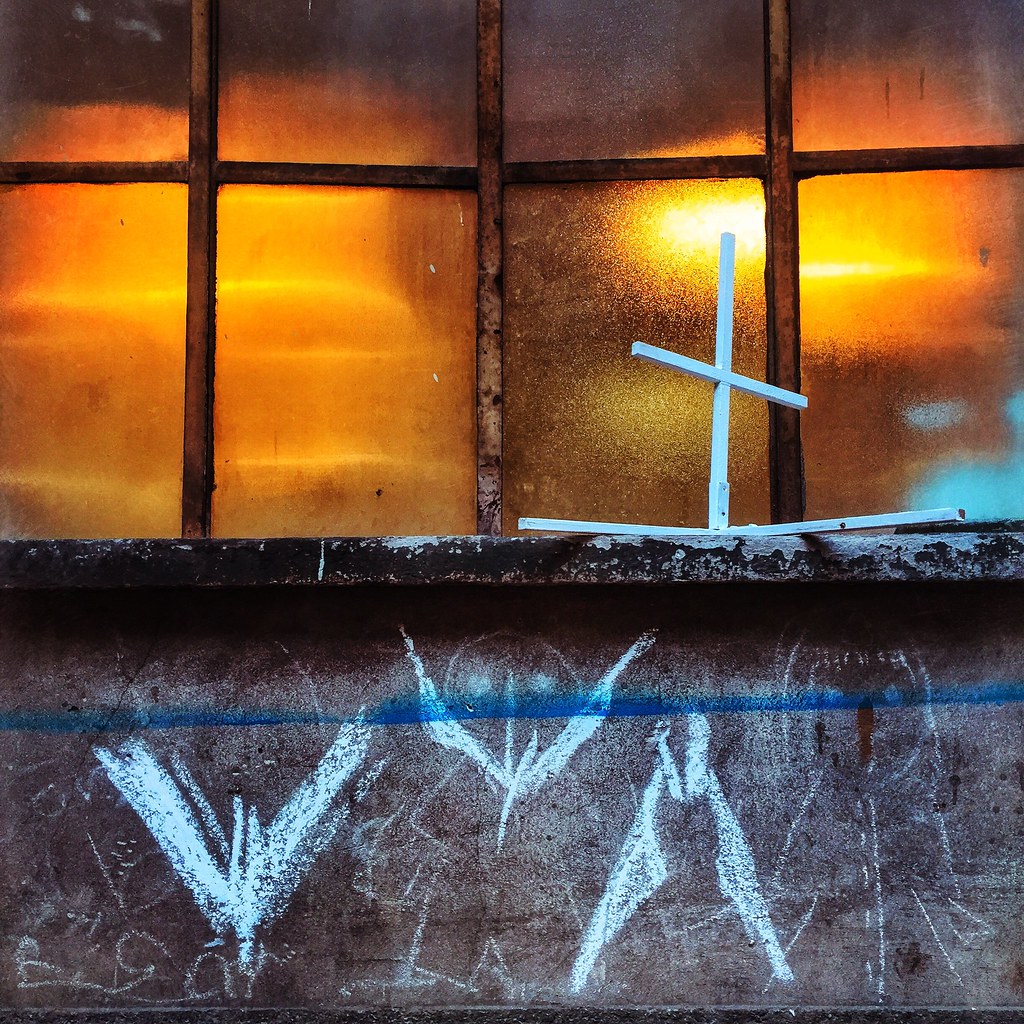 Apps used: I used the iPhone 6 default camera and edited in Snapseed for basic tweaking, then in Hipstamatic (Müller lens, Love 81 film without frame, Apollo flash). Backstory: I was walking through the Brera art Academy in Milan and I found a way to an inner yard. I immediately saw the ground floor window, white cross, the colors and the pictures on the wall forming a kind of surrealist composition. A gloomy Christmas picture open to interpretation. The title is a line from the Jabberwocky. 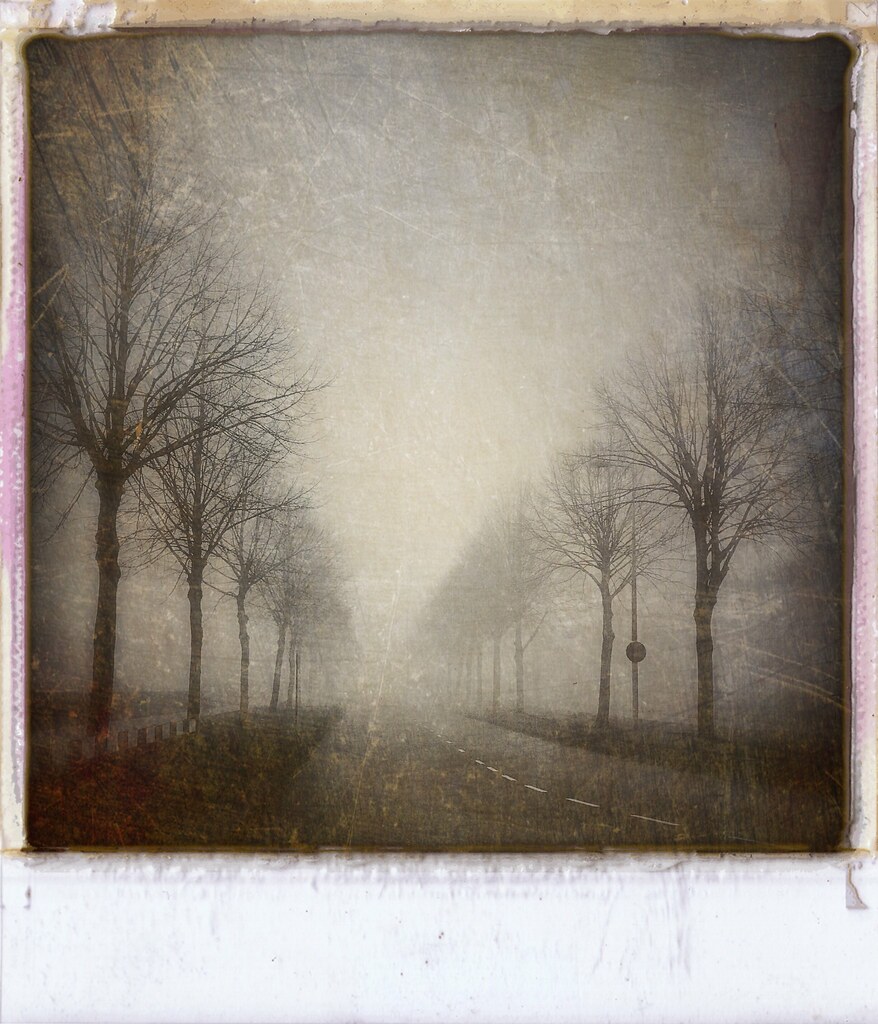 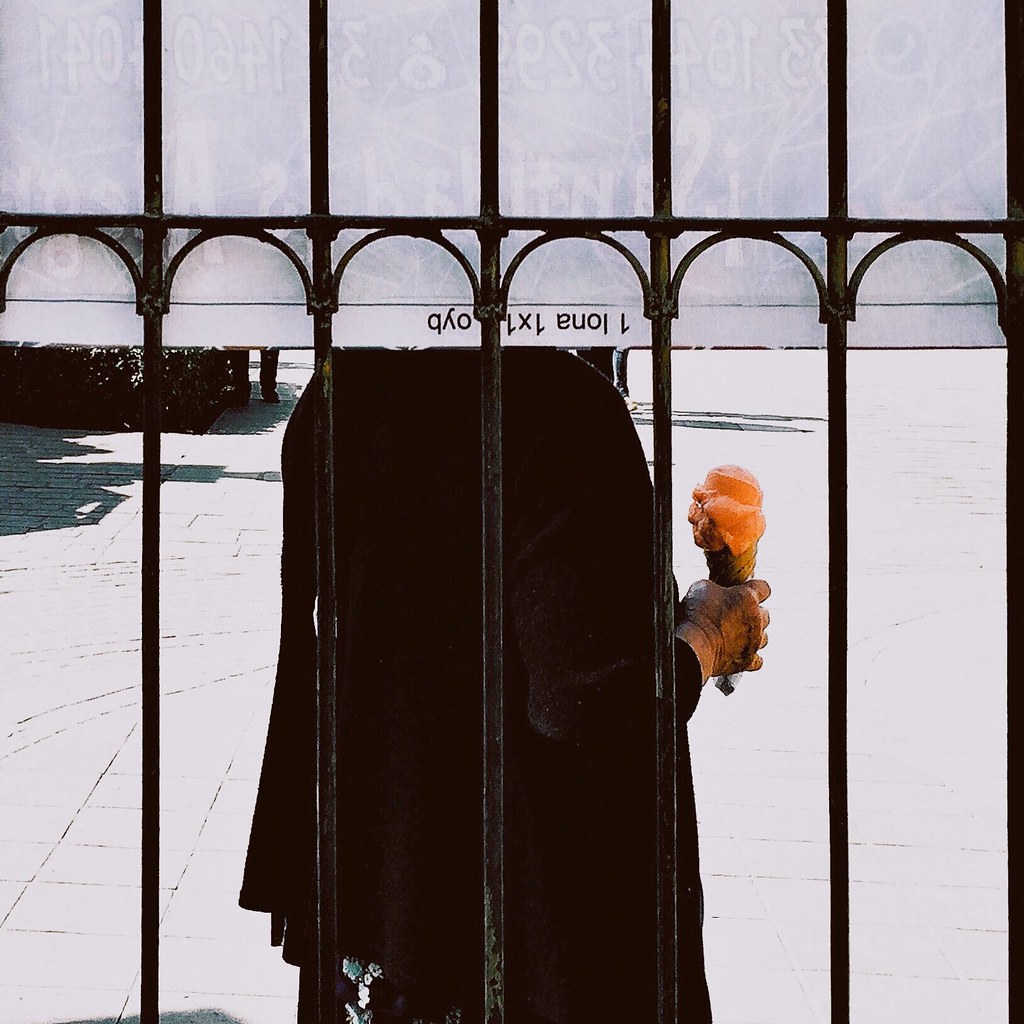 Apps used: Shot on iPhone 6 with Hipstamatic and edited with RNI films and Enlight. 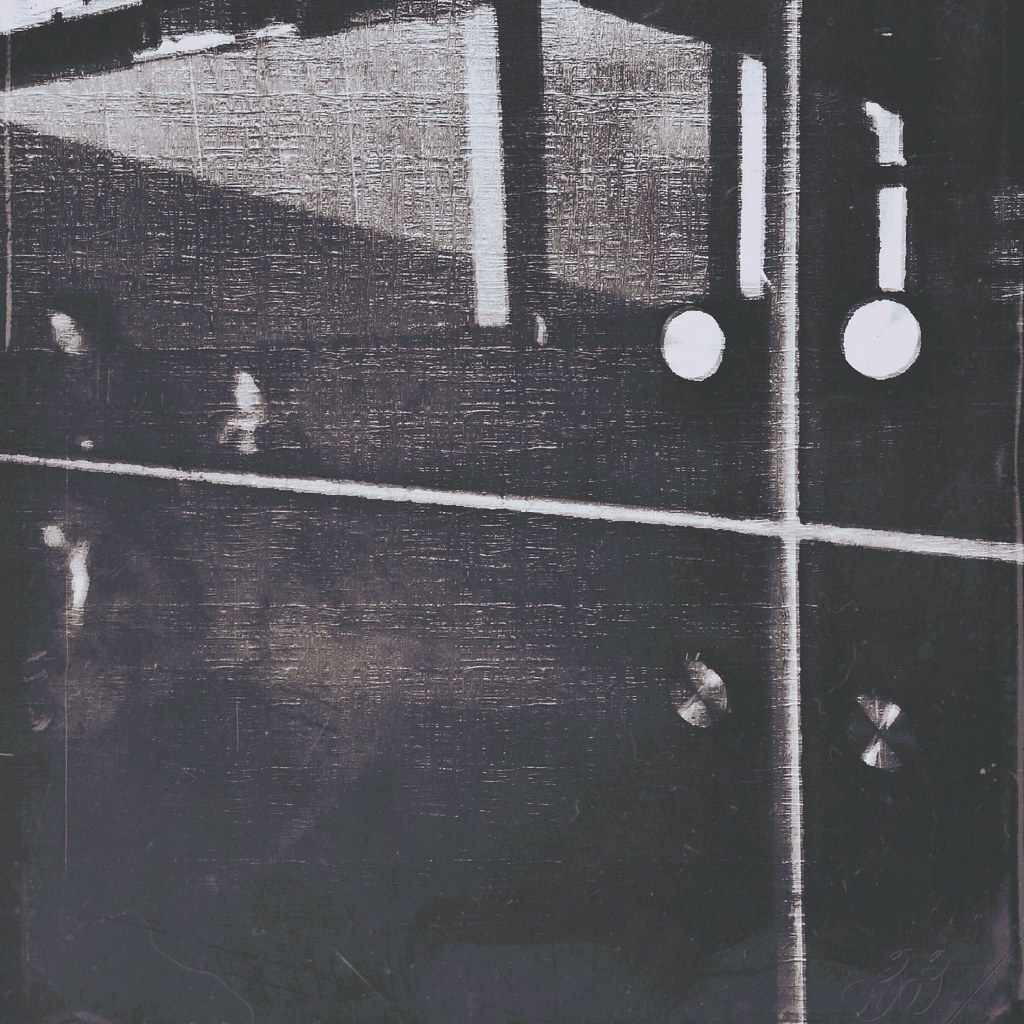 Apps used: provoke-enlight-superimpose-mextures-RNI. Backstory: mom and her son run towards the metro station; snap the photo at the reflection in a glass wall, while they are running behind me 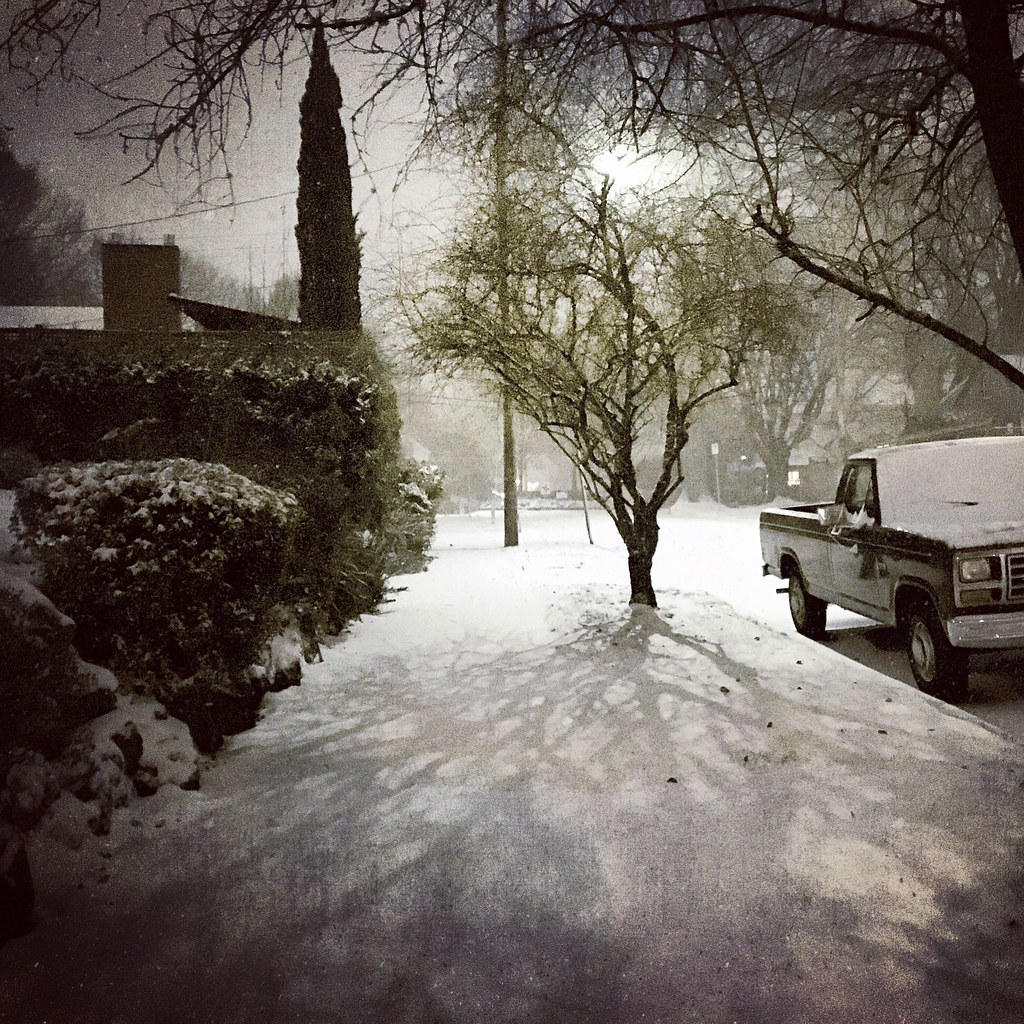 Apps used: Captured with an iPhone 6s and edited with Snapseed. Backstory: I live in a very grey and rainy part of the US and have trouble getting inspired to photograph during our relentlessly damp winters.  Once in awhile we get some great morning fog over the Willamette River however,  it usually vanishes pretty quickly so if I see fog I know I have to rush out  if I want to capture it.  I took this image before 8 a.m. and used my iphone 6s – native camera to capture the image.  I then did some minor edits with Snapseed to get the bridge shadow in the river to pop out more.  Other than that, Mother Nature was a big help and I would like to thank her for that!  Thank you for selecting my image, I very much appreciate the support.

Apps used: Processed with Snapseed. Backstory: My wife and I decided to grab dinner at a great local place (Block 16) that recently had expanded.  While waiting for our meals I was taken by the large mural in their new space and decided to snap a quick shot.  The result I thought was a great juxtaposition of the actual patrons in color standing out against the black and white counterparts within the mural.  I did very little editing with this shot.  Aside from tuning the colors slightly, I added some linear lens blur to soften the patrons in order to help them blend in to the overall scene. 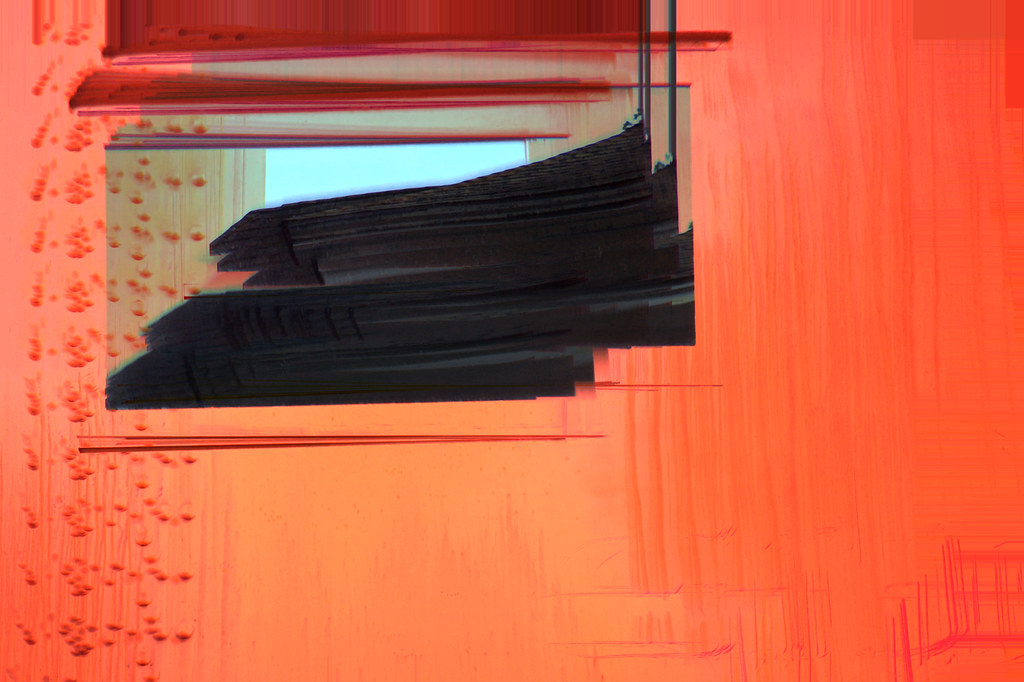 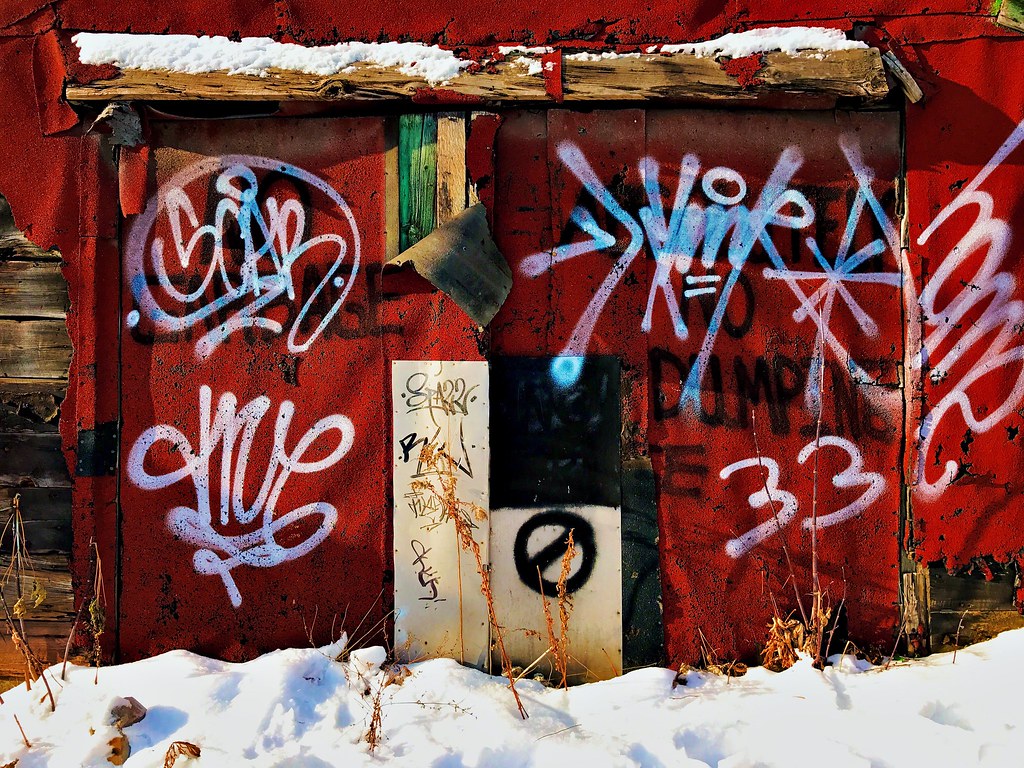 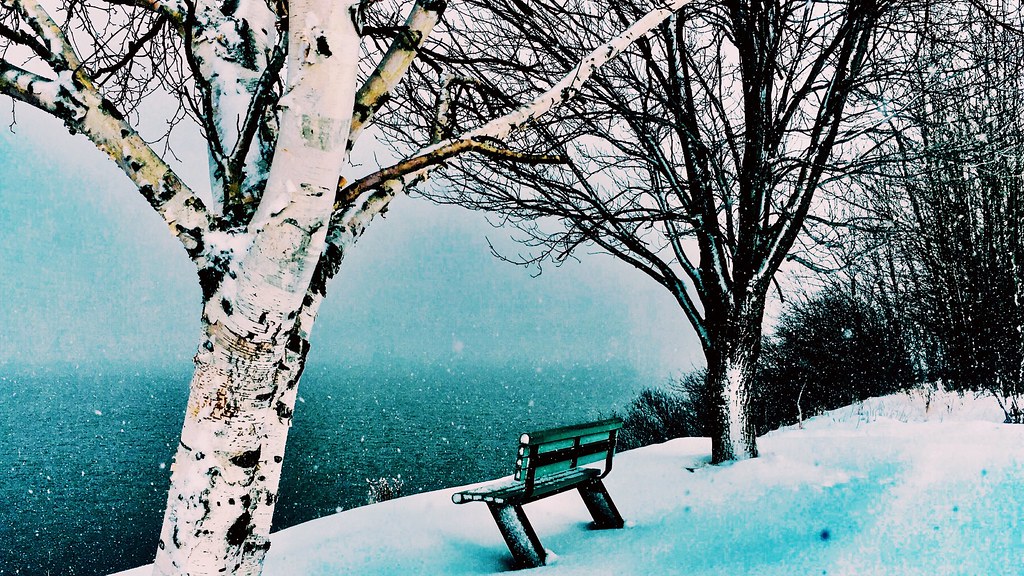 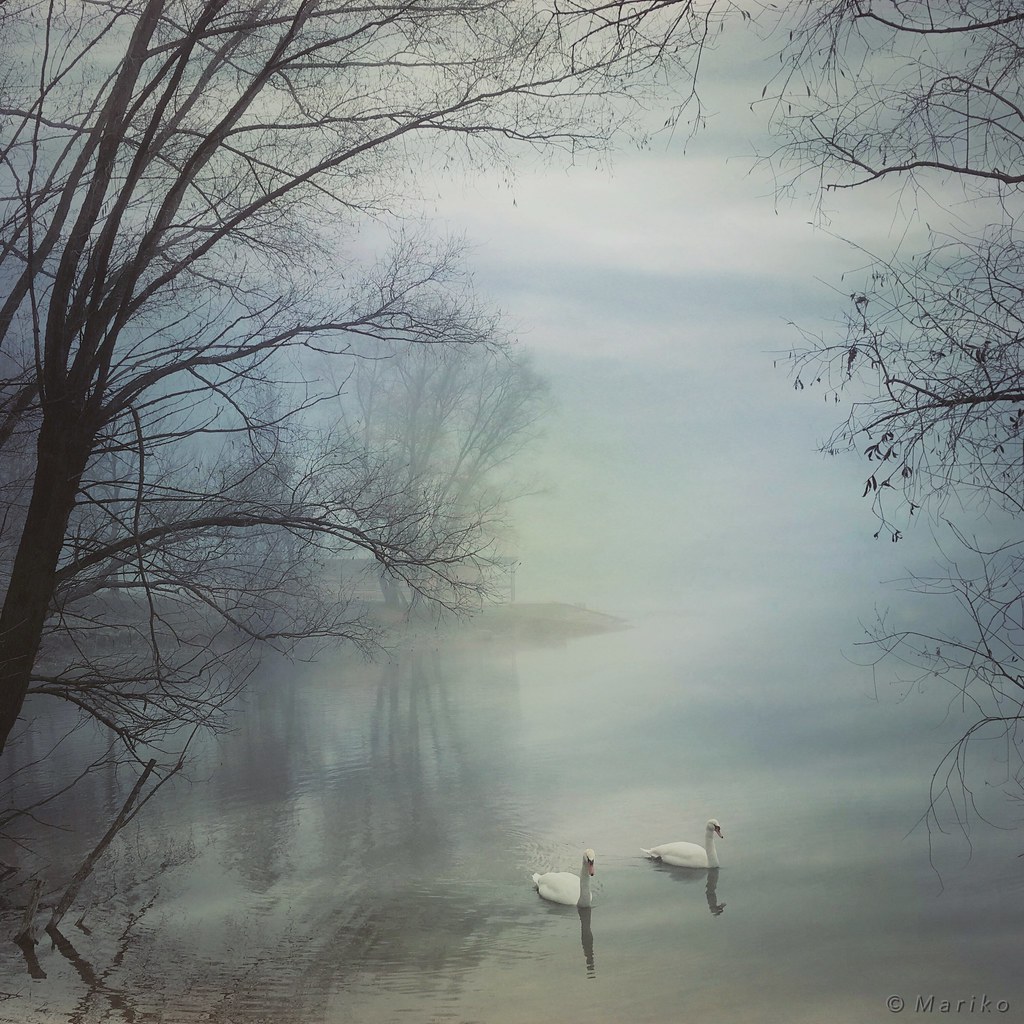 Apps used: Hipstamatic (Vincent lens/Daydream film/Standard flash), Snapseed
Backstory: Fog is my favourite weather condition photographically speaking. It’s just amazing how fog can make ordinary scenery look completely different, so mystical and beautiful.
On this very foggy day I went to a nearby lake to meet the swans. They are always there, waiting to be fed. When they noticed me they began swimming slowly towards me. I just had to wait there for the composition I wanted and took this shot.