This week’s Apps Uncovered presents a selection of exceptionally intriguing images that take up and continue a theme Nicki and I have been exploring over the last few weeks – “painterly” style compositions that include portraits. I’m expanding the focus this time around to work posted this past week in our Flickr group that concentrates not just on the human face, but the human form and even people in an ensemble setting.

In this week’s lead artwork, “Waiting” by Jim Blodget, the artist was “subconsciously … reacting to the silent stories of suffering and bravery that surrounded” him while he waited for his wife to undergo her cancer treatment.

Rita Colantonio (represented with three amazing pieces this week – an embarrassment of riches), our erstwhile compatriot Stef L.P., lorenka campos, newcomer, Anthea Hearne-Dudman, regular Dragan Fly, Linda Hollier, iPhoneography Central stalwart columnsovsleep, newcomer jan uiterwijk and long-time contributer and always remarkable Susan Blase complete the week’s selections on this theme. (And I can’t leave off Nicki’s enthusiastic comment on Susan’s artwork depicting dancing shoes of the most special kind: “Adore this Suzy! I always know you work in an instant now. So full of drama, playfulness and mischief. Love it! ….and of course David Bowie was my hero!”) 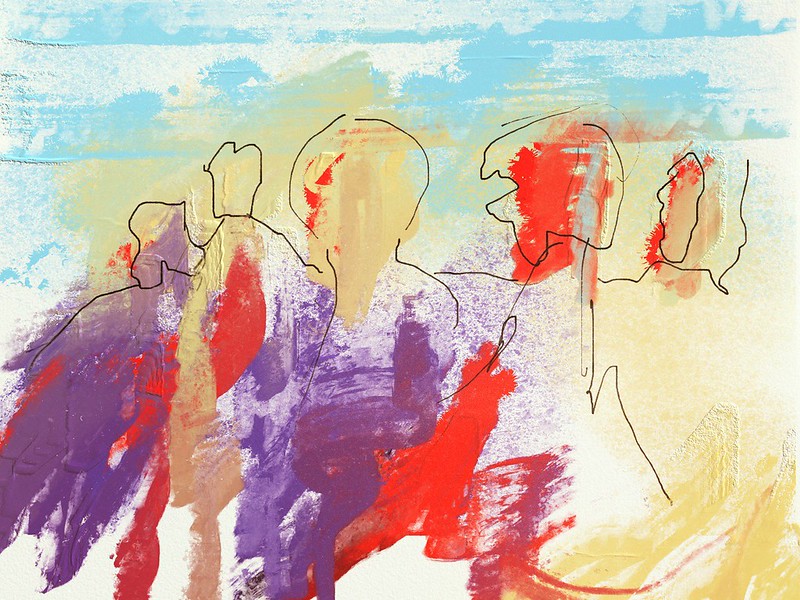 Apps used: iPad Mini, Art Set Pro app
Backstory: I’m retired and paint for my own enjoyment with both traditional and digital media. I like to try a wide variety of styles from representational to purely abstract. Sometimes it’s just fun to play with an app to pass the time while waiting. My wife is being treated for cancer. I did this painting while waiting in the clinic. I used the Art Set Pro app on my iPad Mini. I painted it intuitively without much thought to composition or design – paint in one layer, line in another. Later I realized that subconsciously I was reacting to the silent stories of suffering and bravery that surrounded us. For me this painting represents the heroism of the clinic.
I’ve been sketching and painting on iDevices for ten years. I started on an iPod Touch and posted my images to Flickr and soon discovered that other people were doing the same. We all learned from each other, groups formed and grew into a worldwide movement of mobile artist. 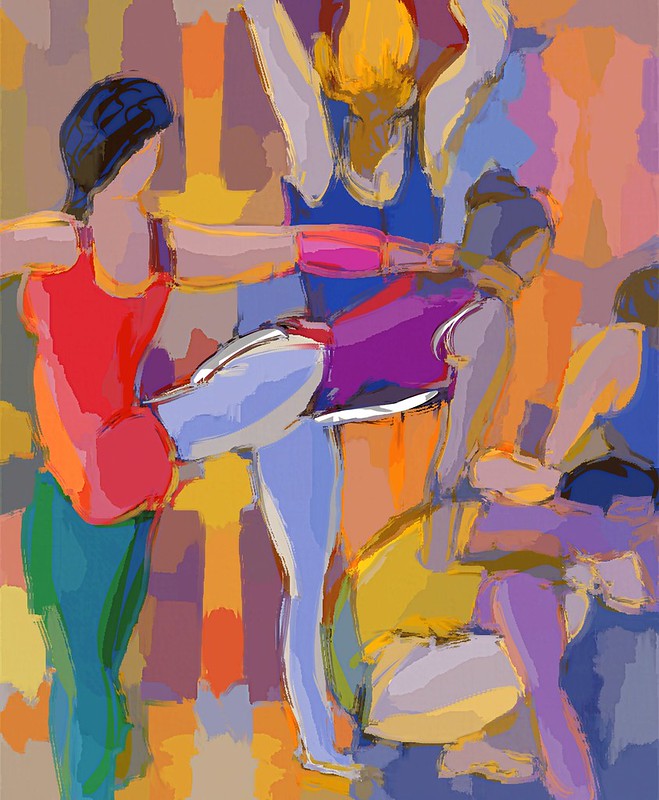 The job of moving, without lines to restrict by rita colantonio

Apps used and backstory: This one is very interesting because the birth of this image came from a charcoal gesture drawing I did many years ago. I photographed and cropped the drawing. I then used procreate to paint in the colors. I added the background colors from an abstract I created in IColorama. But it didn’t stop there. Next In IColorama I simplified and flattened the image. Then came Metabrush app to add paint texture. Ultimately I decided I didn’t want the black outlines, so back in metabrush app I painted over them or erased some parts to expose white. Now I achieved the painterly shapes and effect of movement that I wanted. 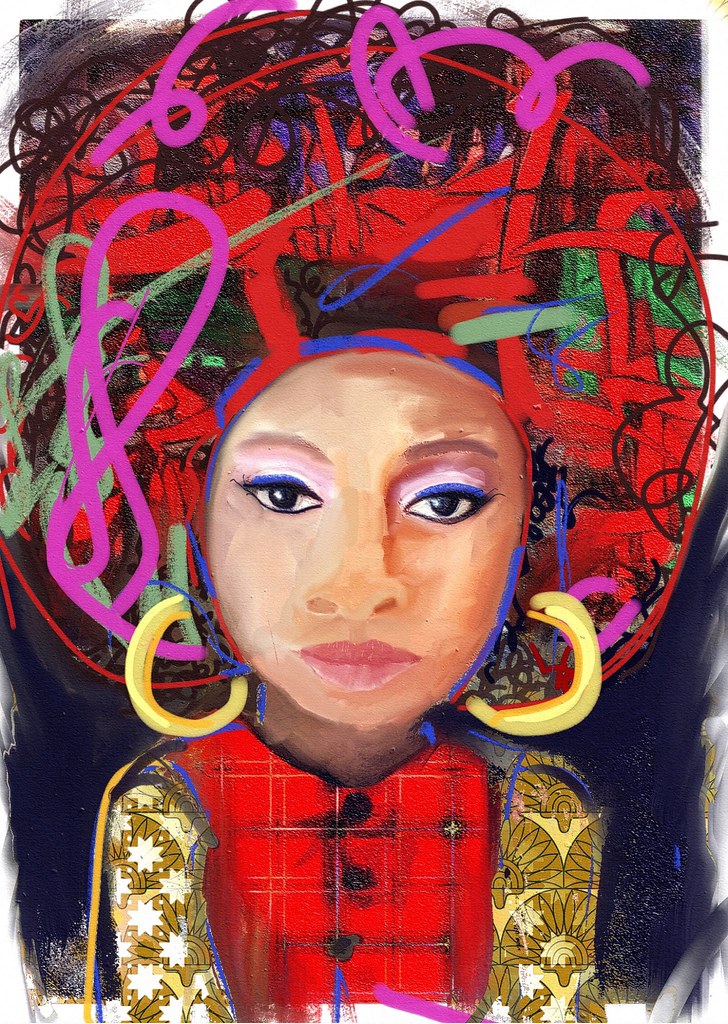 Apps used : SuperimposeX, Procreate, iColorama, Snapseed.
Backstory: Using a friends selfie I wanted to create a piece celebrating natural hair. I found her hair crown an area I could use to suggest a bit of her story; (although her story now is more general). Graffiti and its history is fascinating to me. The tagging individuals would do to shout out their id is a street take on the basic human need for acknowledgement. Containing her tag within her marvelous afro was my way of her self empowering. Looking objectively at this— we can never tell what is going on inside another’s head. Some might just be overloaded with input. On the lighter side I really just having fun playing dress up with these characters. 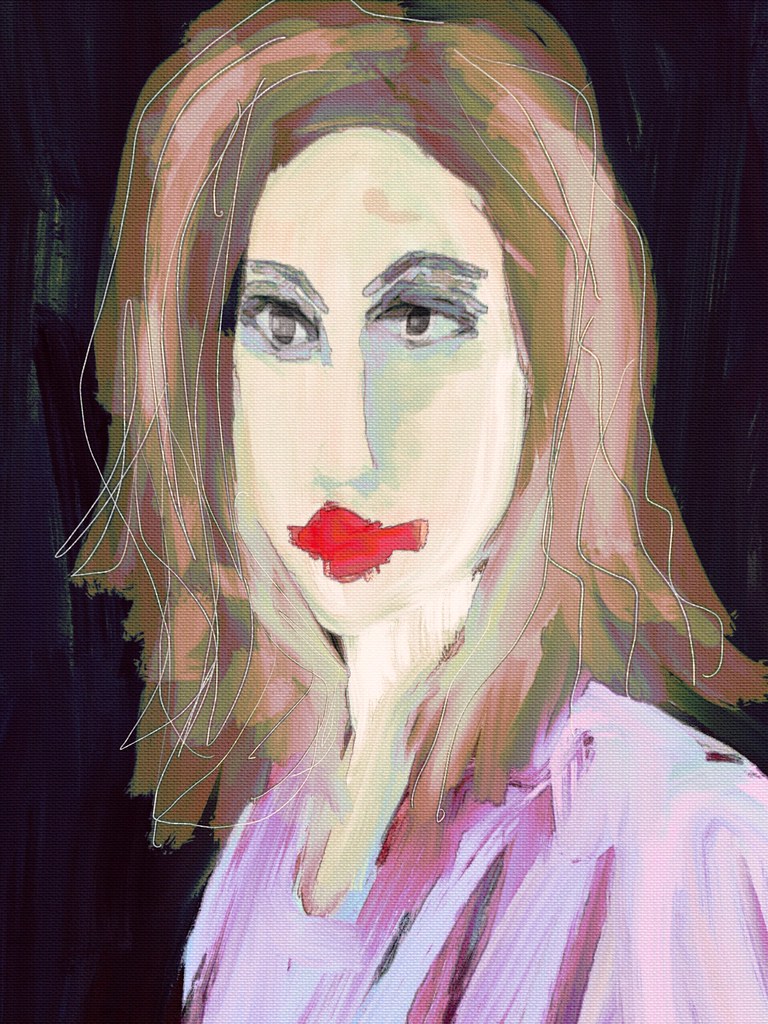 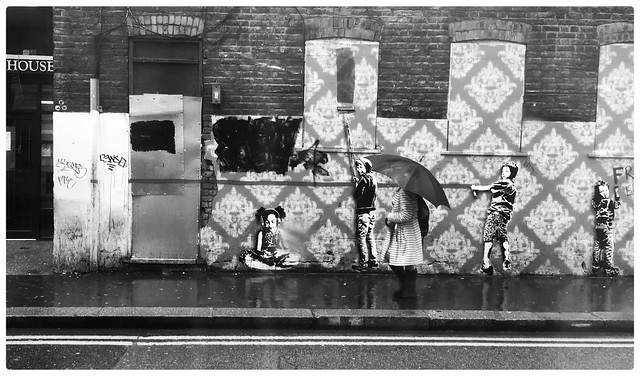 Apps used and backstory: Edited in snapseed. This was taken on a miserable summer’s day in August and I was travelling home on a bus through Croydon. Whilst at traffic lights I happened to glance to my right and saw this really interesting example of street art and a passerby. Knowing I had only a few seconds before the bus pulled away, I grabbed my iPhone and took the shot. I had no time to wait for the perfect positioning of the passerby. I and really pleased with the result! I edited the image using snapseed by cropping it, turning it black and white and adding a little more contrast. 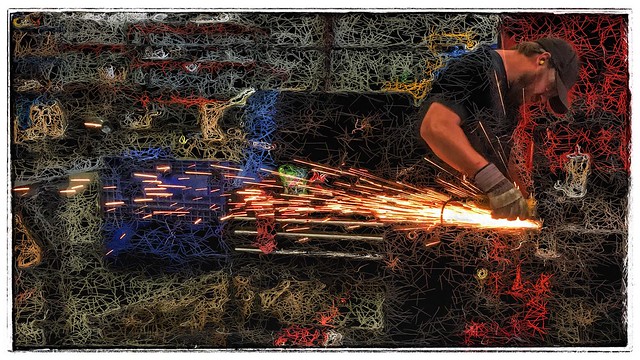 Apps used: iP6s with native camera. Touched with Snapseed, Glaze, Blender and finished with Snapseed.
Backstory: I work in a heavy industrial environment and venture into all sorts of factories. So I always try to be ready when “sparks” fly. Sometimes the image doesn’t amount to much. Then sometimes I get a really good shot, one worth playing around on. The latter resulted in this image. 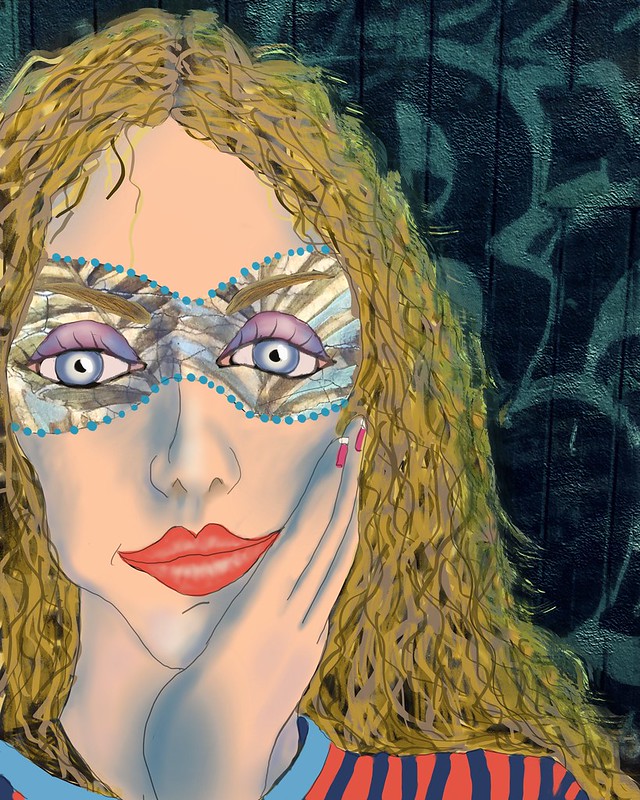 Jungle in the city by rita colantonio

Apps used and backstory: This portrait was inspired by the work of Teresa Lunt and her distorted images. The original photograph came from a Sktchy portrait, an online source for copyright free images. In Procreate app I sketched an outline, warping the features and face shape. I then deleted the original so I had only the sketch to work with. I painted the entire image in Procreate app, using various brushes for texture. In Procreate I added the mask and inserted one of my original textures. For the background I used a combination of an original graffiti photo and Stackables texture. This model has a hardened city feel, so different from the original portrait, which had an innocence. 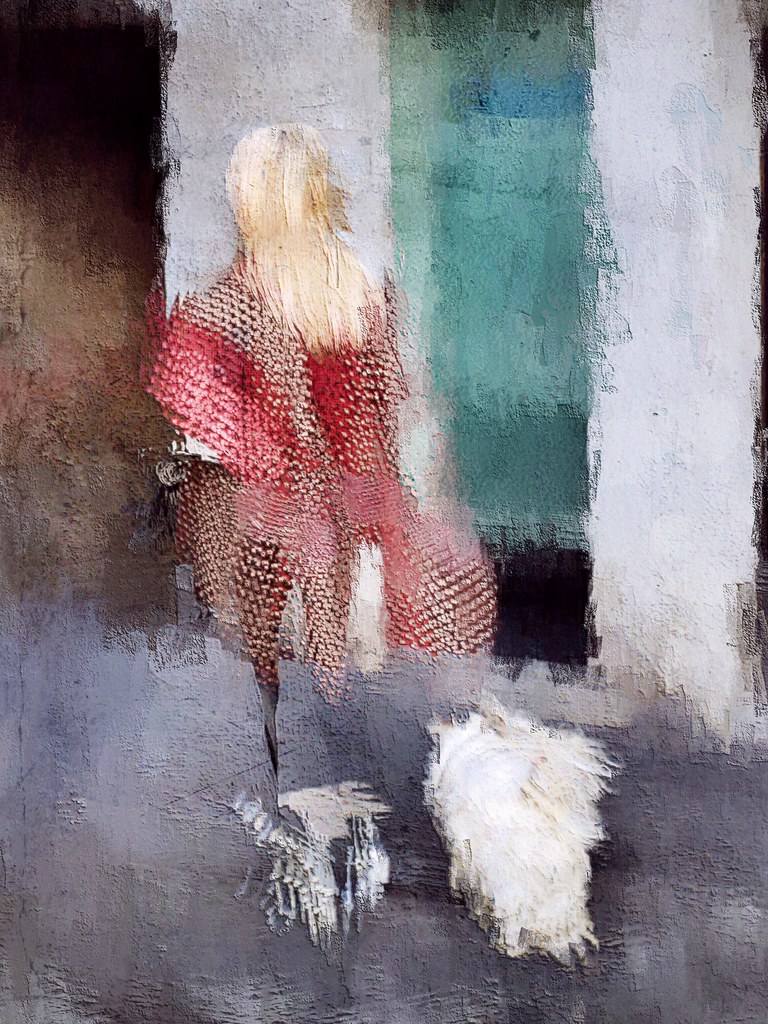 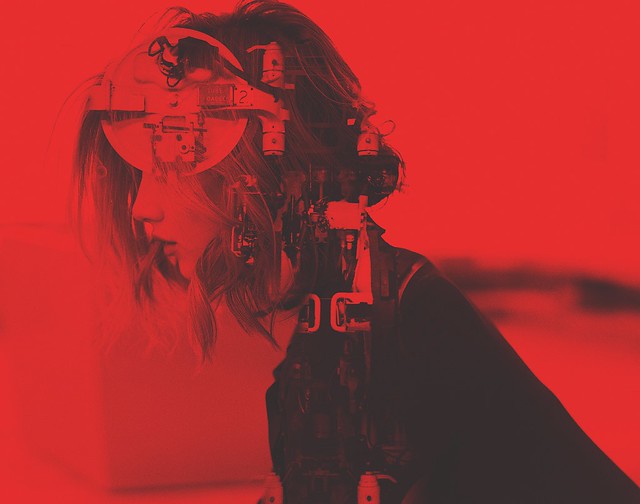 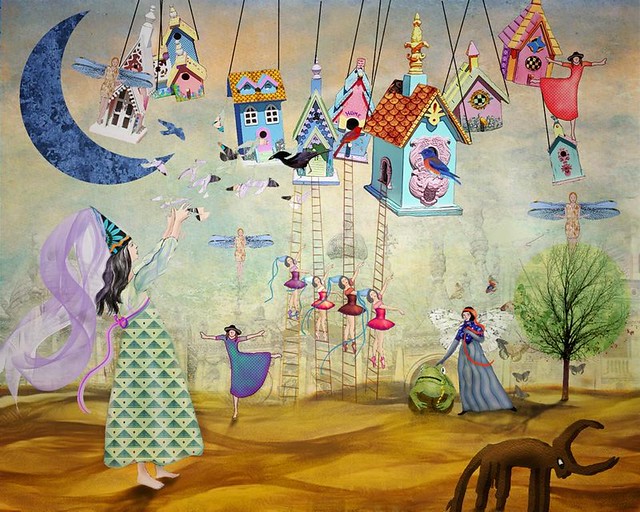 A fairy tale with bird houses by rita colantonio

Apps used and backstory: On a recent trip to Martha’s Vineyard this summer I was fascinated by the colorful birdhouses on the porches of the cottages in the Tabernacle center of Oak Bluffs. I photographed each one, knowing that someday I would use them in an image. I happened to be looking at some wonderful fantasy art by Maria Brzozowska of Turkey. Her art became my inspiration for composing this fairytale image.
I painted a background with acrylic paint, photographed it and edited with textures in IColorama. I then cut out and edited every birdhouse seperately, arranging them in my composition. I added the birds, created the moon shape and tree. The figures were drawn and painted using procreate app.
This edit was a combination of the tools in both IColorama and procreate apps. 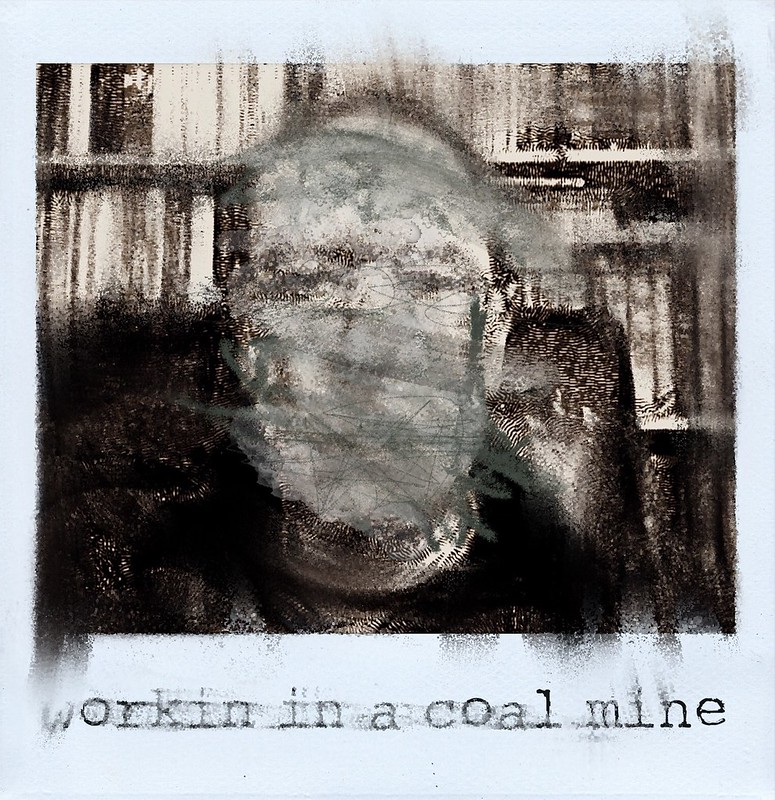 Daddy was… by jan uiterwijk

Apps used:
1 Made with Iphone6s
2 Continued in Ipadpro
3 Made graphical in the Inkwork app
4 The Polamatic app made it a fake Polaroid
5 In the end it was made dirty with the Artset app.
Backstory: First of all our family is or was never involved in the coal business. Everywhere people are losing their job. One say it’s because of the progress. After coal comes oil, after oil comes gas, wind power, solar power, nuclear power etc., etc. In all these businesses one day there is no work left and people involved are, if have bad luck, workless and sitting at home doing nothing. That’s my point and the subject of the image! 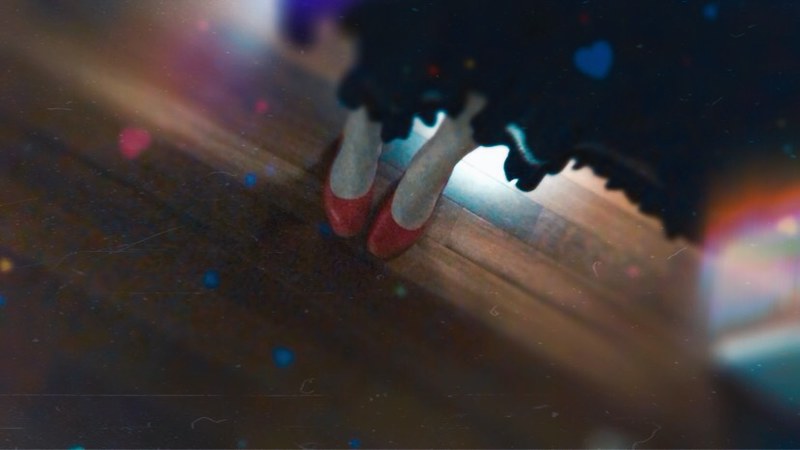 Apps used: 1967 and Tadaa
Backstory: This photo was just a very fast snap to show my love what I was wearing. Not the best one I’ve ever done but I kinda liked the haphazard composition of it. Most of the editing was done with a new app I’ve been loving, 1967. So mainly aside from Tadaa to blur out the edges a tad, all was done with my new fav editing tool. I wasn’t sure on the heart bokeh but liked the idea to add since really the sentiment behind the shot had sweet origins. Of course I titled of the David Bowie classic, one of my favorites.