This time around, I am featuring the colour RED. On Flickr, I have several galleries, and I collect the works simply by an either dominant or highlighted colour. Not any particular topic or style, simply colour. I feel it gives one a different way of looking at a particular work. 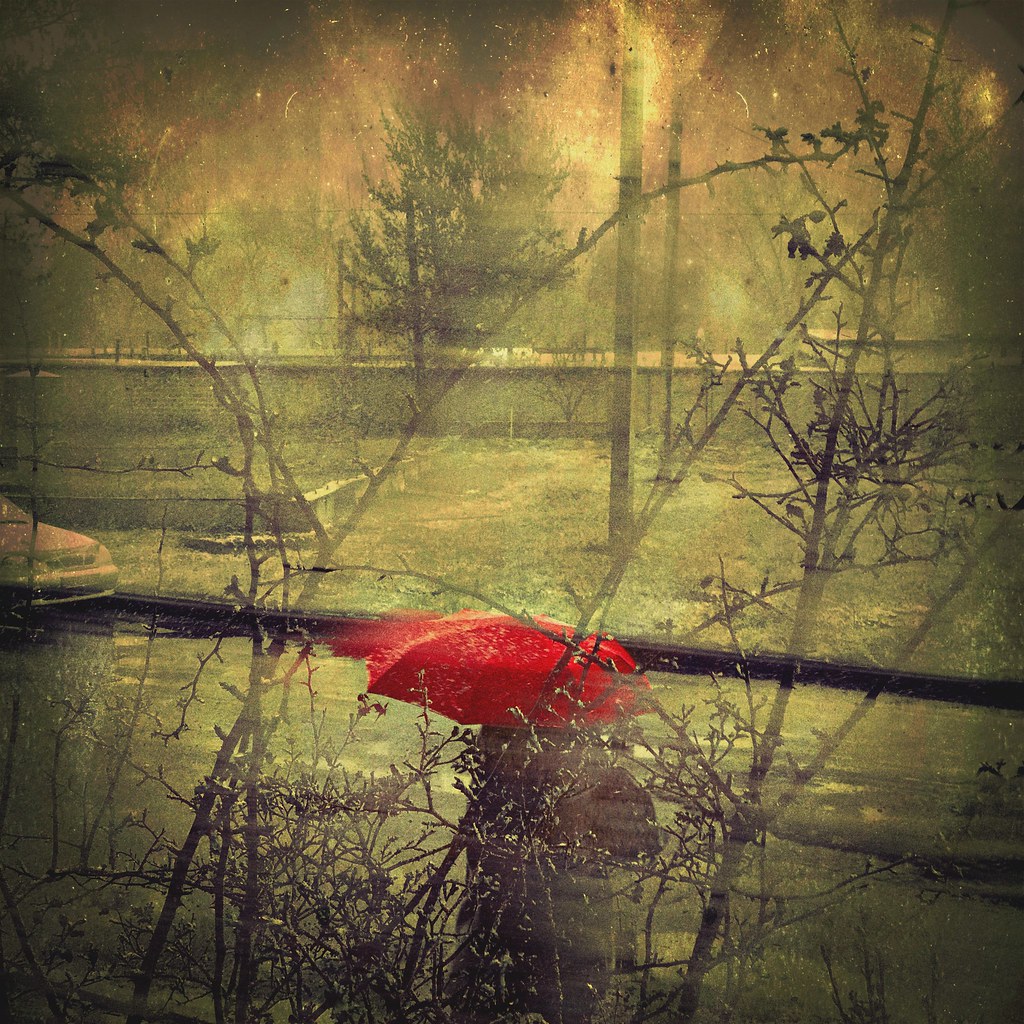 Apps used: Taken with iPhone 7 plus, edited in Color Accent (desaturation of all except that red umbrella) Hipstamatic Tachman lens, Aristotle film, no flash, and “cooking” the final result with number of sliders. Backstory: Since that time I have gone crazy about photography. I have i started to look at the sky, and around, and up, and down, and whatever, so when I saw that woman with a red umbrella on the dark rainy street, I just pressed the button, because the scenery seemed just perfect for me then! 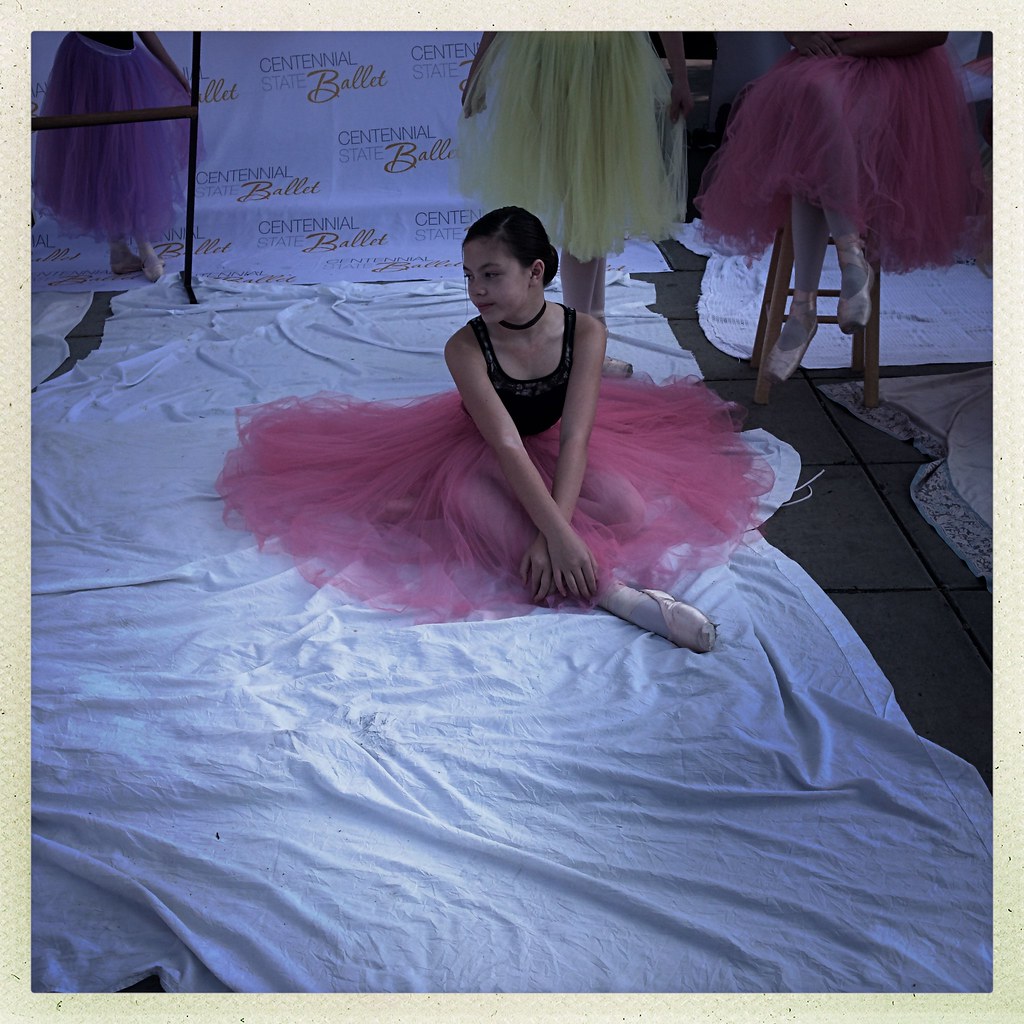 Apps used: Hipstamatic image using Jane, Ina’s 1982, and Cadet Blue Gel
Backstory: I had just learned that morning of this combo by Lori Hillsberg and when I came across this scene, I knew the combo would be perfect. There were a group of ballerinas posing on the street during Longmont’s Artwalk. A group of painters, photographers and sculptors stood around this scene creating their pieces. I was lucky enough to have stumbled upon this! 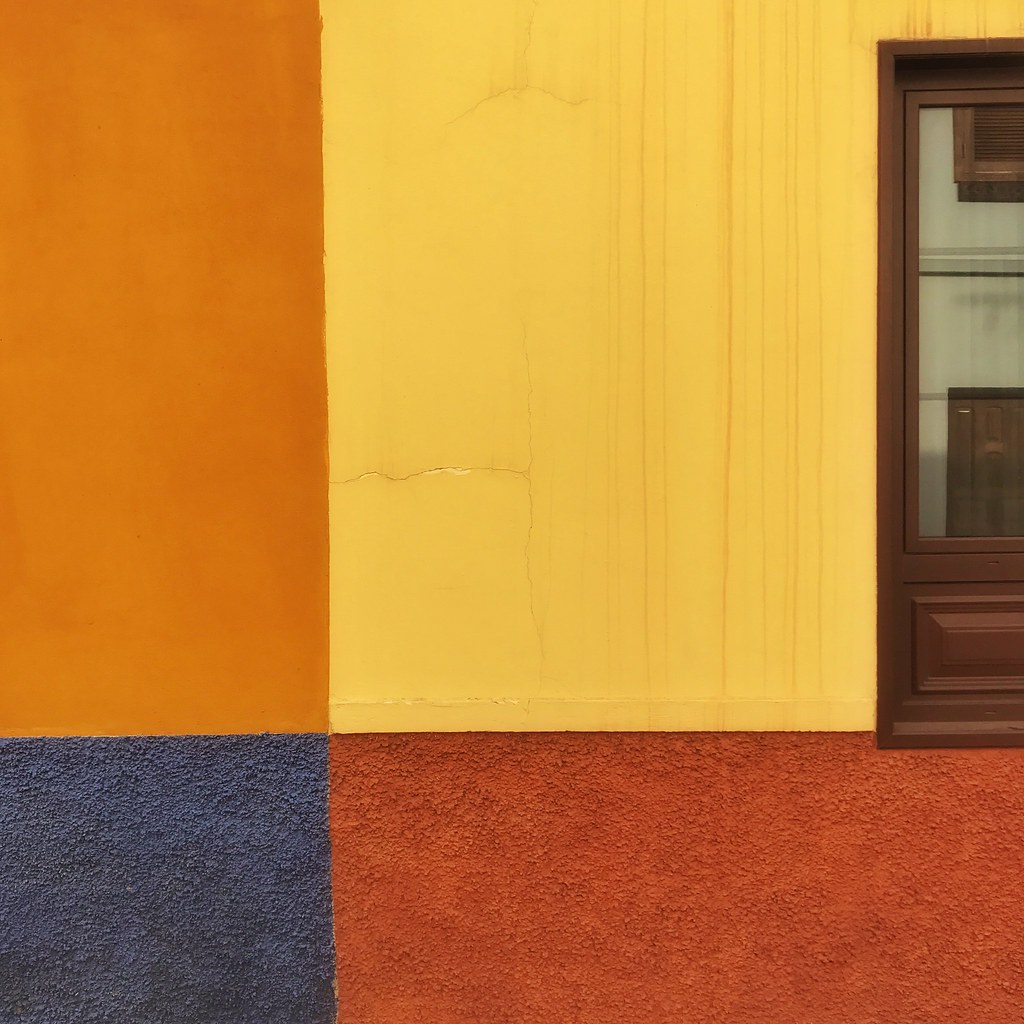 Apps used: iPhone 7plus default camera and edited in Snapseed. Backstory: Walking down the streets of San Sebastian de la Gomera, in the Canary Islands, one can see very colorful houses. This particular boundary between two of them caught my attention. It would make a great abstract composition, providing a piece of window is included to give some context. 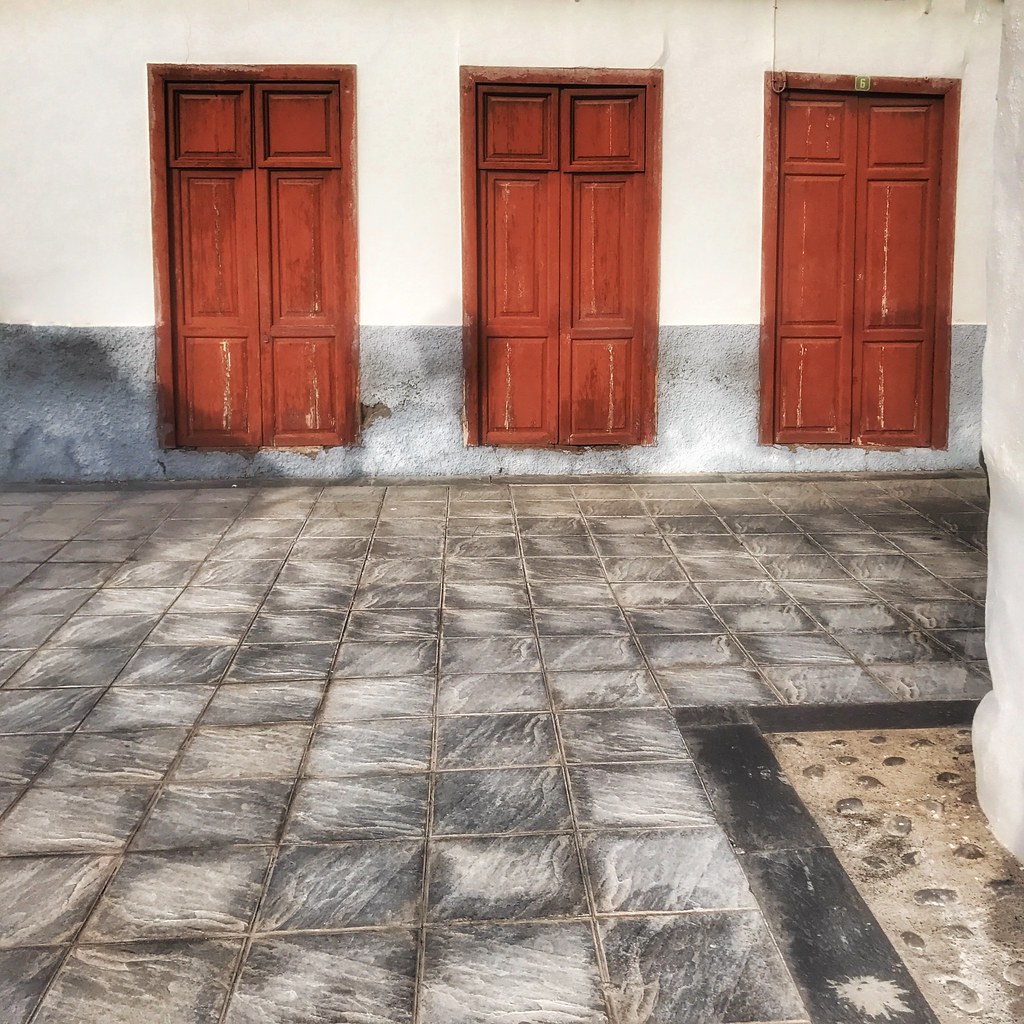 Apps used: iPhone 7plus default camera and edited in Snapseed.
Backstory: A small square on the side of a church in San Sebastian de La Gomera, in the Canary Islands. A pattern of squares on the floor, three doors with a step threshold or three low windows? Either way, they seem to ask for a choice. Certainly they screamed at me to photograph them. The different floor on the right and the bumpy corner were obvious choices to me. 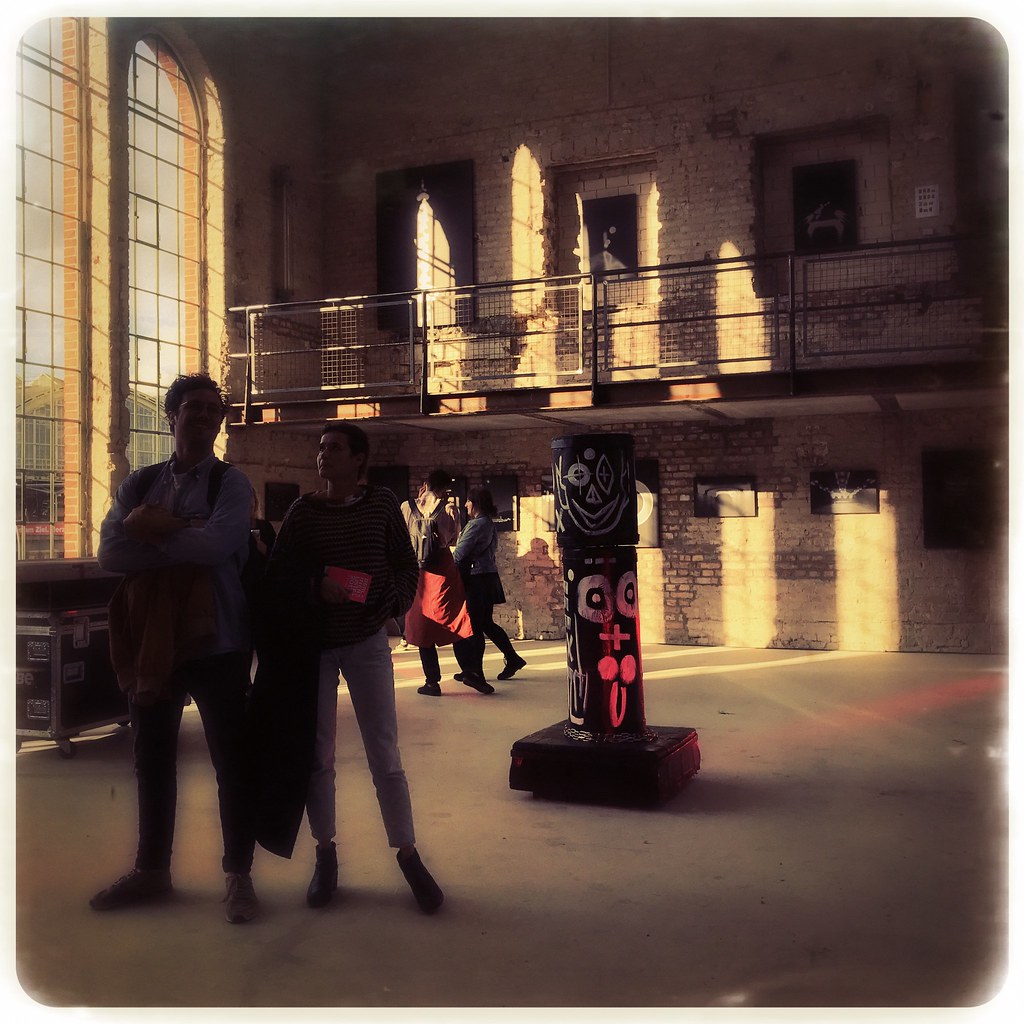 Apps used: Hipstamatic with Sergio lens, Maximus LXIX film, and Triple Crown flash. Backstory: I took this photo with the iPhone 7 at the Berlin Art Week (Berliner Liste) exhibit at the old Post station (Postbahnhof). I had taken a number of photos in black and white, but when I was leaving I noticed the golden evening light. This Hipstamatic combination emphasized the yellows, added a glow to the reds, and blurred the edges, enhancing my first impression. 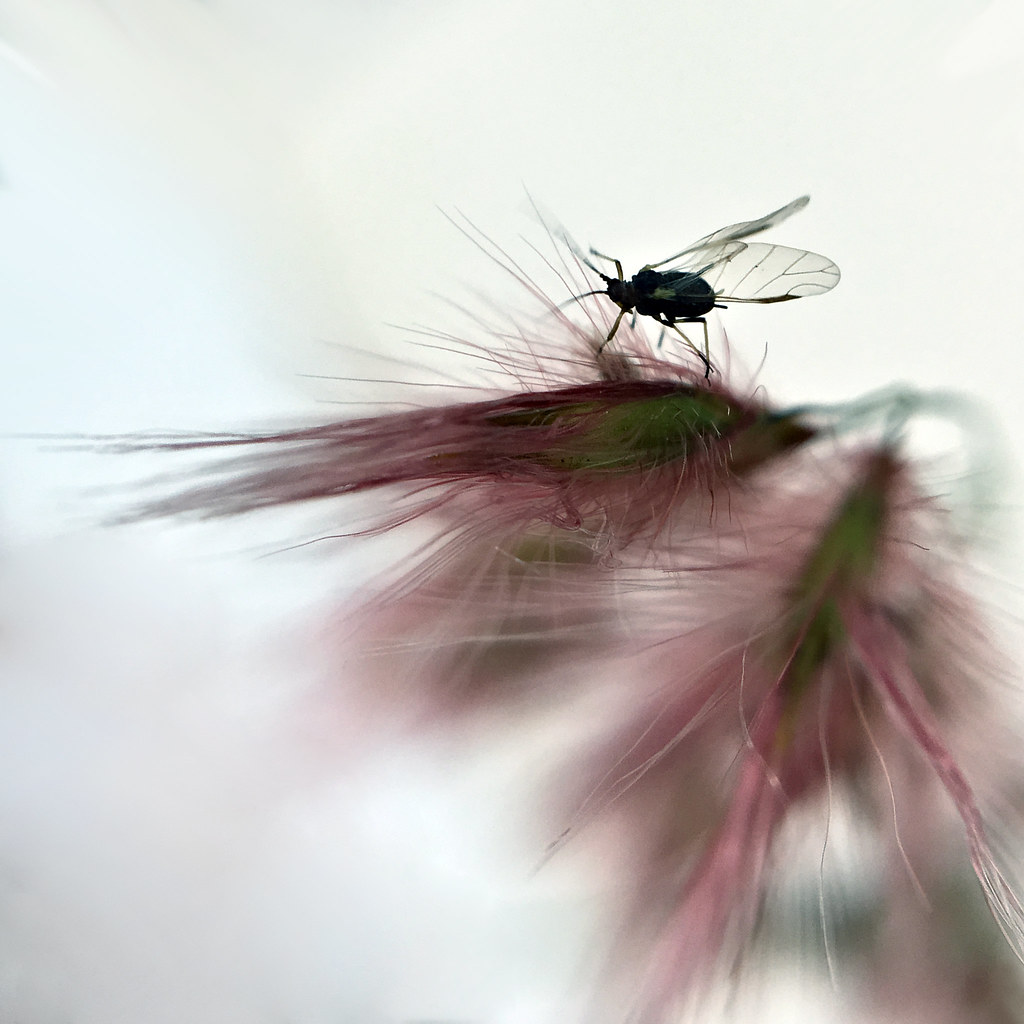 Apps used: iPhone 7 Plus using macro setting on Camera+ Ztylus Macro lens and polished off in Snapseed.
Backstory: Thatch grass and a tiny winged insect. Exploring macro and it’s amazing what you can find in the tiny world. 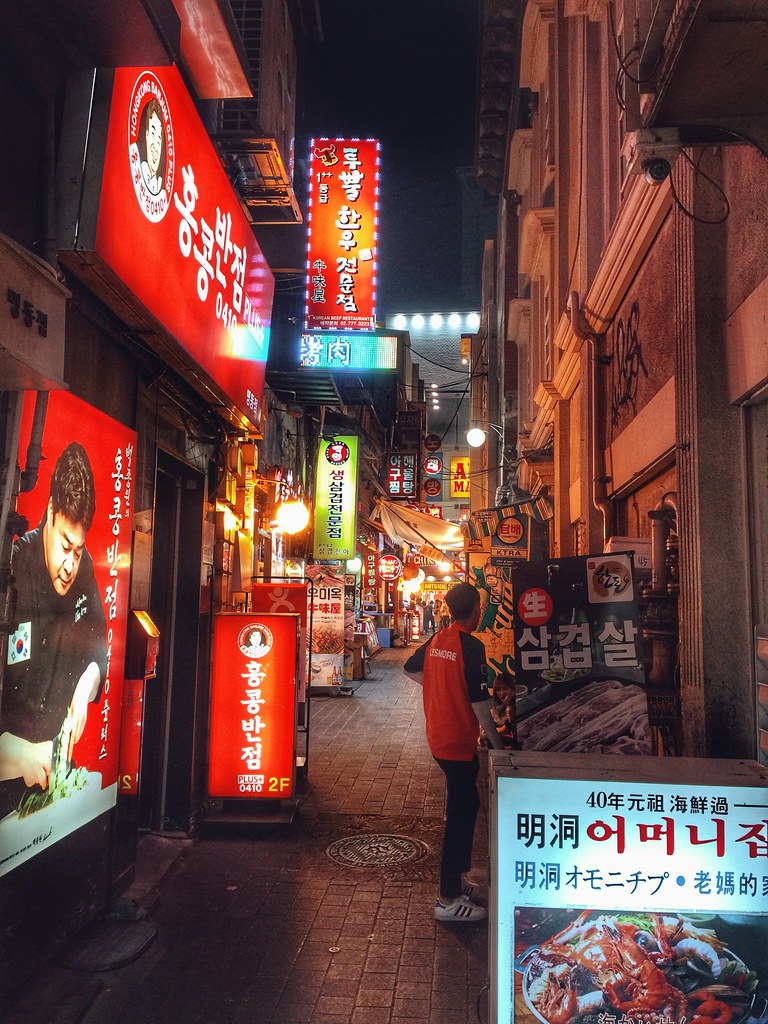 Apps used: Taken with an iPhone 6+ and processed in Snapseed
Backstory: On my first visit to South Korea, I became mesmerized by this amazing country. I created this image while doing some night time street photography in the Myeongdong shopping district. 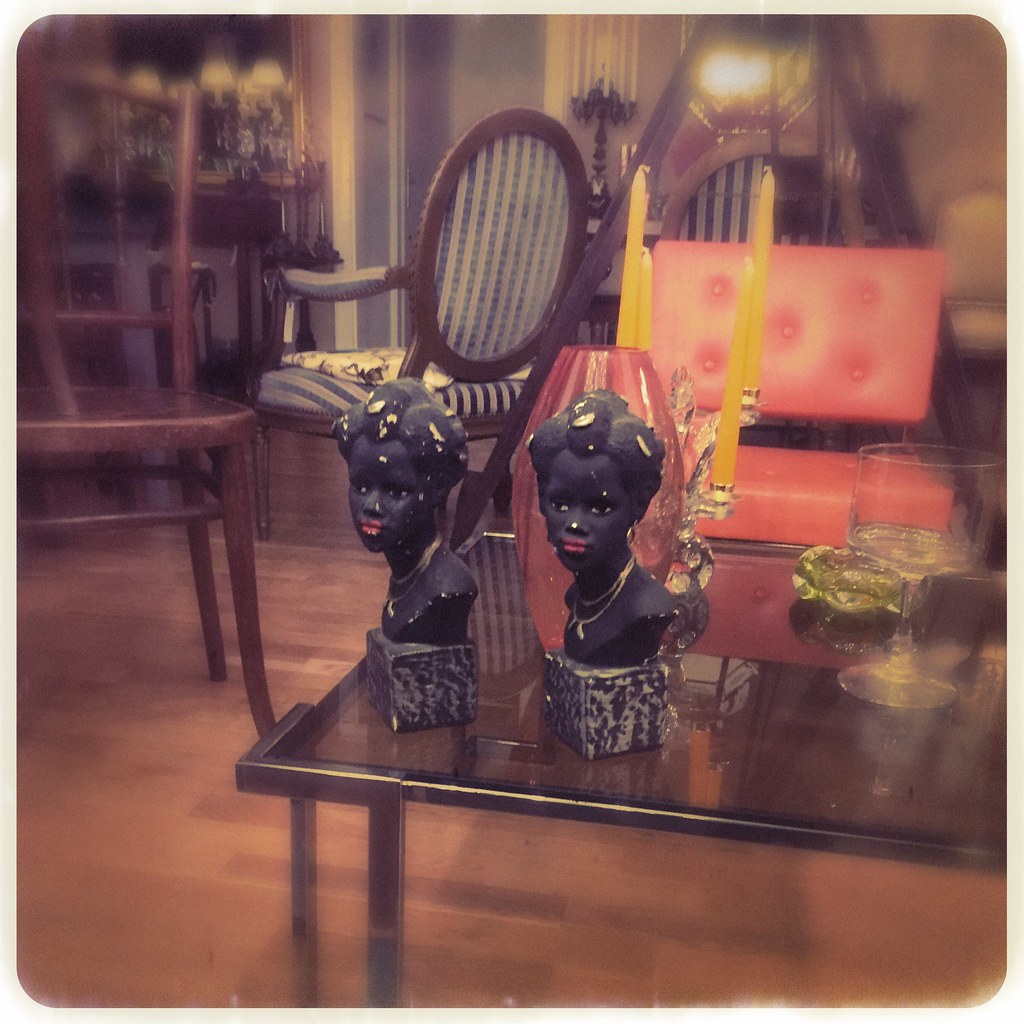 Apps used: I used Hipstamatic (I simply love it!) Backstory: There is no big story behind. It’s my romantic view on a pre-apocalyptic world, my passion to shoot for a lifetime!!! 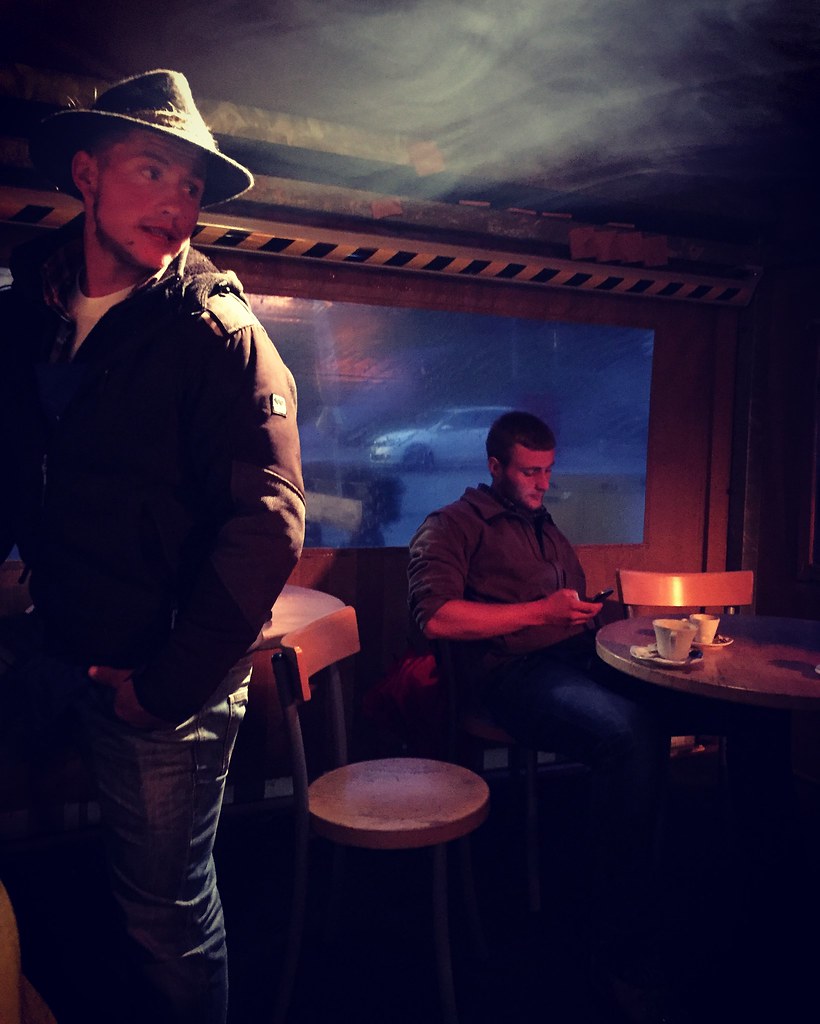 Apps used: iPhone 6 and worked with the Instagram’s filter XPro-II.
Backstory: This was taken while the local cattle breeders were celebrating the end of the summer work. They had just rounded up their livestock under a heavy rain and brought them back to the stables. Now it’s time to chill, dry up, and blow off a little steam before returning to the winter routine. I liked the tones given by the combination of smoke, overhead heaters’ light and the blue of the dimming light of the day through a plastic window pane. 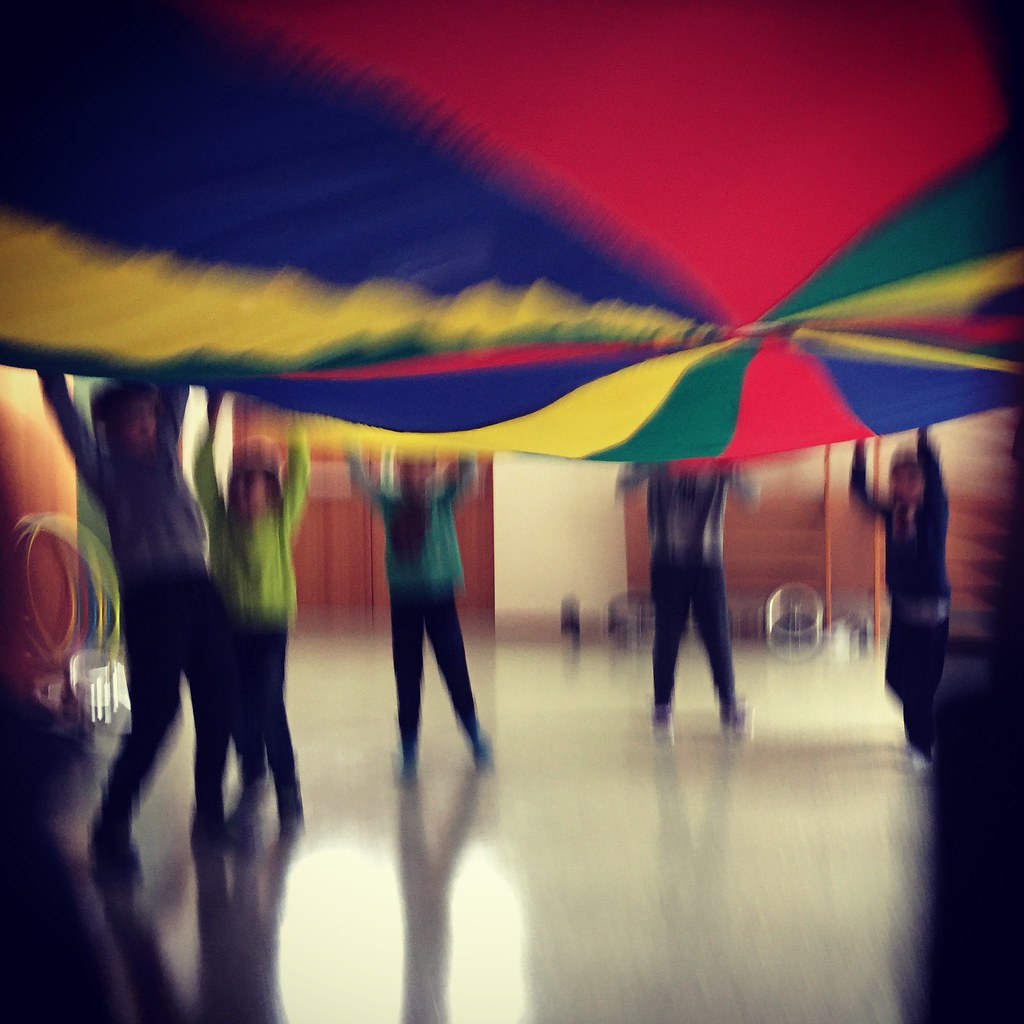 Apps Used: iPhone 6 and worked with the Instagram’s filter XPro-II. Backstory: A group of children are playing with a parachute under the guidance of a circus school teacher. I tried to catch the atmosphere of joy through the movement. 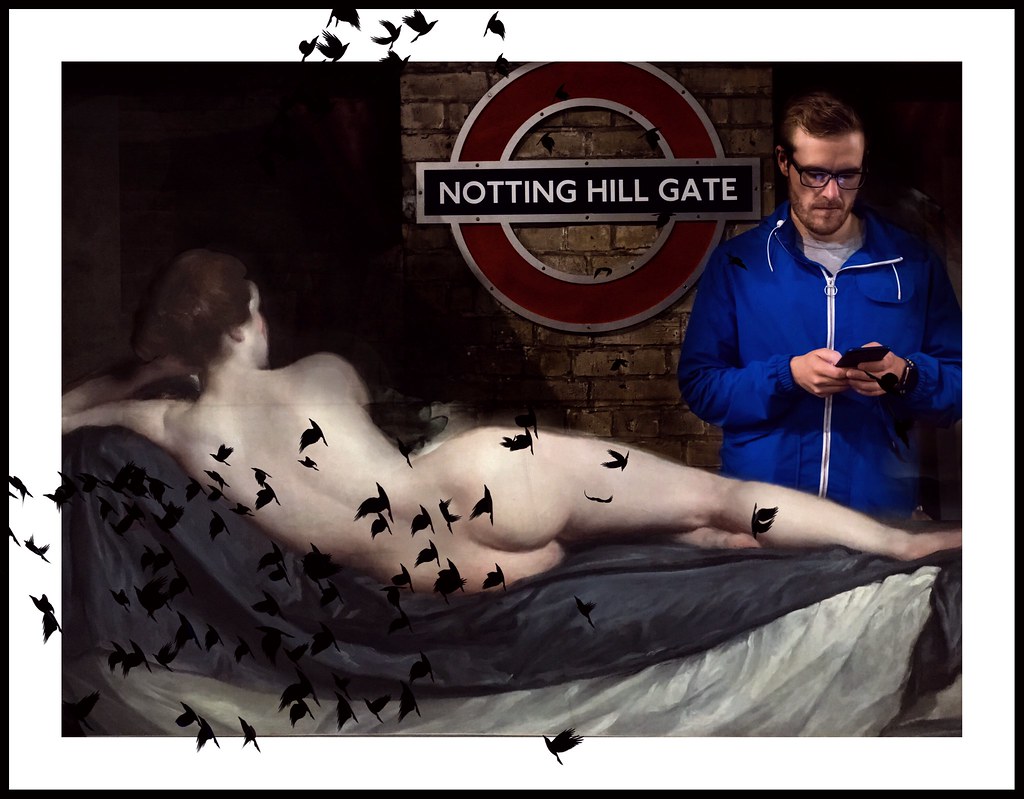 Apps Used: iPhone 6s and made with Repix 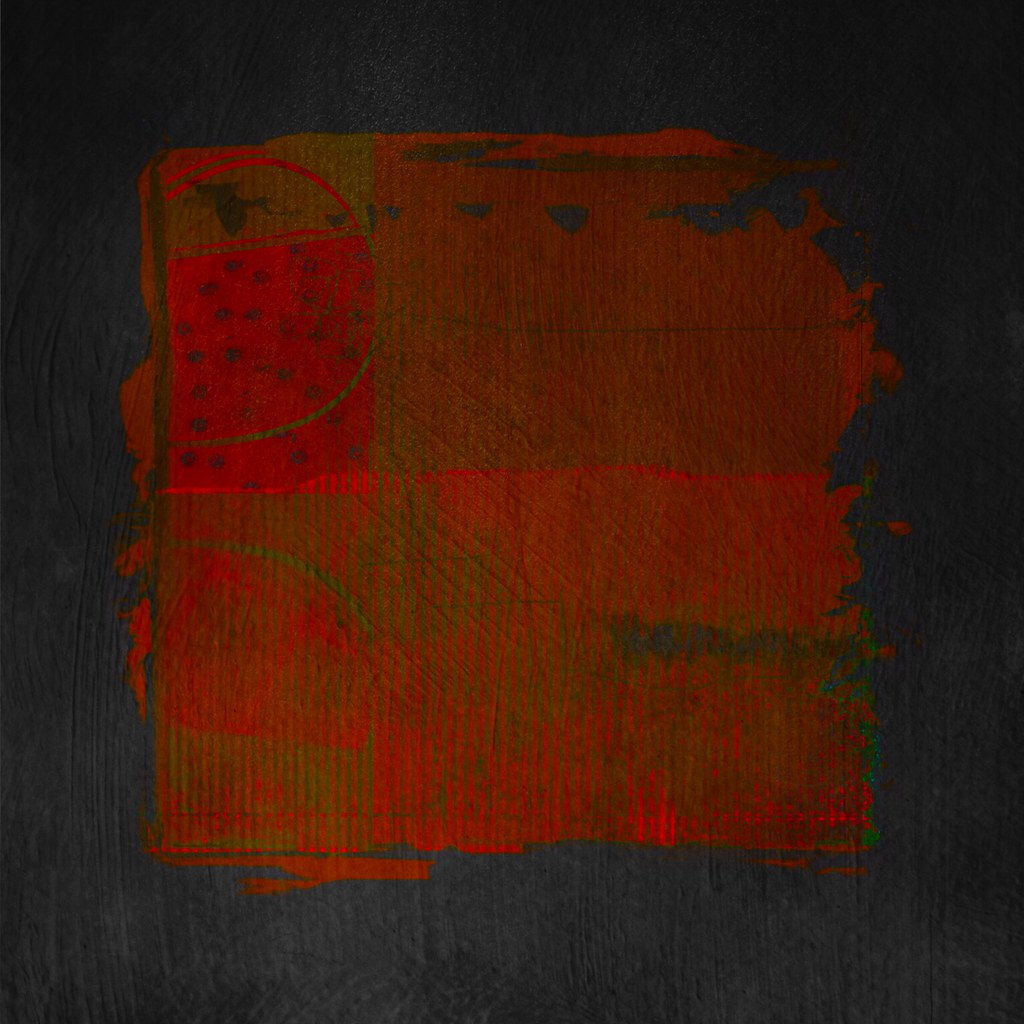 Backstory: This image was created when Hurricane Irma was 100 miles south of our location. We still had power but night had set in when the winds would eventually reach 95 mph, tearing a 40-ft awning from our building around 1 a.m. There is a kind of beauty witnessing the power of nature, coequal with the terror it wears on its massive shoulders. This work tries to capture the enormity of Irma’s strength.