This week’s Apps Uncovered presents a selection of exceptionally intriguing images posted this past week in our Flickr group. As most of you know by now, where possible, I love selecting images according to a pattern I perceive in the posts for the week – but here I forced things a bit by choosing images that are quite a bit different. I rationalized that portraits (including self-portraits), are posed, and in some ways, still lives are often posed as well. And if not posed, found and “framed” for effect.

This week’s lead artwork, “Mademoiselle” by Rita Colantonio, is a masterwork of “painterly” portraiture. Also in this week’s set, this same artist presents one of the week’s finest still lifes. We are very glad to have Rita contributing to our Flickr group! 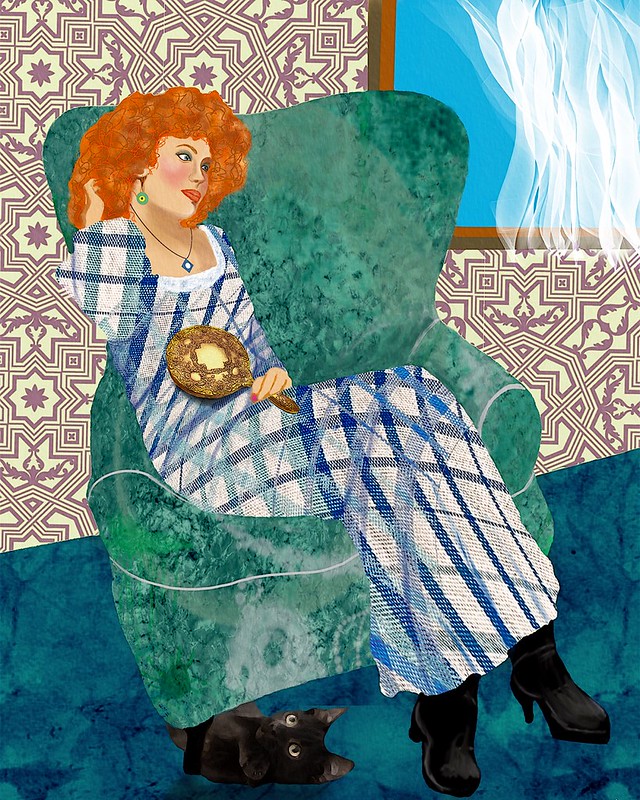 Apps used and backstory: I photographed this young lady at a recent photo shoot with my iPhoneXS. I liked the pose and thought it reminded me of some of Matisse’s ladies, so I wanted to use lots of patterns. I had a photograph of this cozy chair in my camera roll which worked perfectly for her. I opened her up in procreate app and lightly outlined her form in a separate layer. I inserted the chair in another layer. Then I painted with my Apple Pencil. For her dress, I photographed a cotton fabric I had and created the texture in IColorama. In procreate I drew and painted the background. I also inserted the texture for the chair and painted the curtain, and inserted the dress texture, warping it to mold to her body. Then in IColorama I blended in the cat, placed a pattern on the wall and floor, blended in my photo of the hand mirror and tuned the colors. 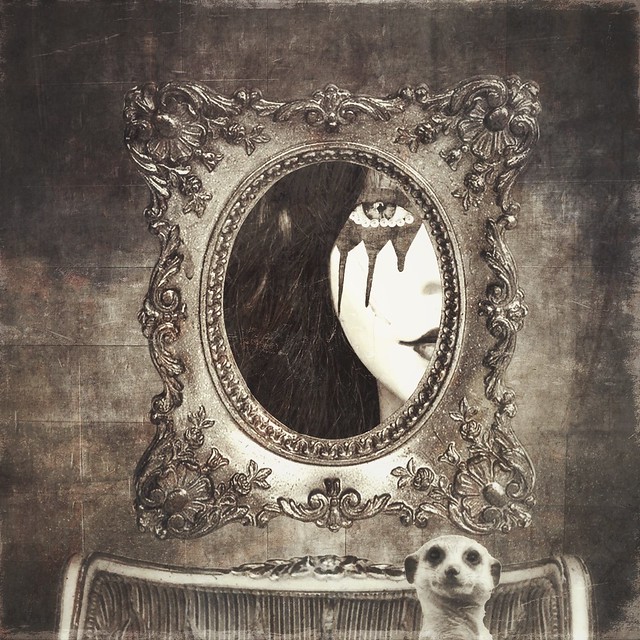 Apps used: SuperimposeX to mask and arrange my various photos, and Stackables for color and textures on background and foreground.
Backstory: the image i placed in the mirror/frame is a mannequin from a vintage shop named Calamity Anne. I like old mannequins with their vacant stares and scars of time. I wanted it to seem like she was seeing herself, but all of us too.

Apps used and backstory: This is a favorite image from several years ago. It was shot on an iPhone 5, using the 6X6 app.
It is an image of the last stages of some roses blossoms, that were in my garden. Portrayed is the sad, inevitable and yet beautiful ending of a grouping of roses; hence the name “Decline”.
It was post processed, primarily in VSCO,using the X1 monochrome conversion preset. A light texture was then applied in Mextures. I finished the image in Snapseed using Portrait mode, to imbue the photo with a soft, moody ambience. 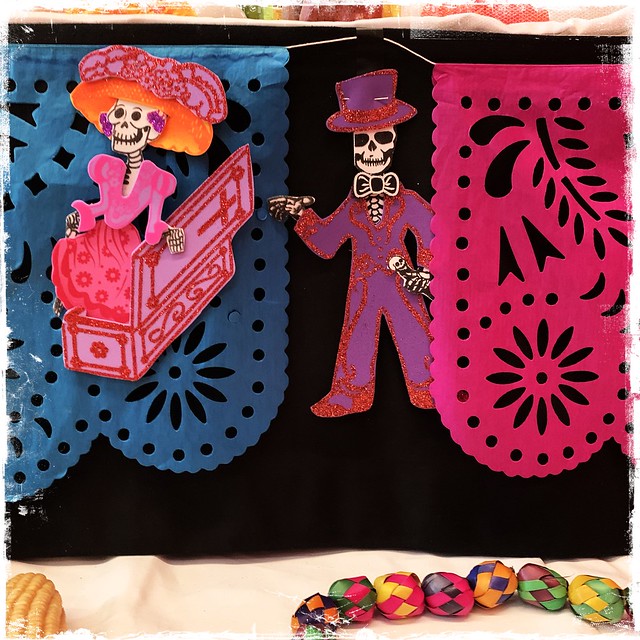 Mexican Day of the Dead (2) by Karen Axelrad

App used: Hipstamatic with James M Lens, Kodot XGrizzled Film, and TripleCrown flash
Backstory: I was at the Mexican Embassy, Berlin to see the altar they had built for the Day of the Dead. This is a small detail from the altar. 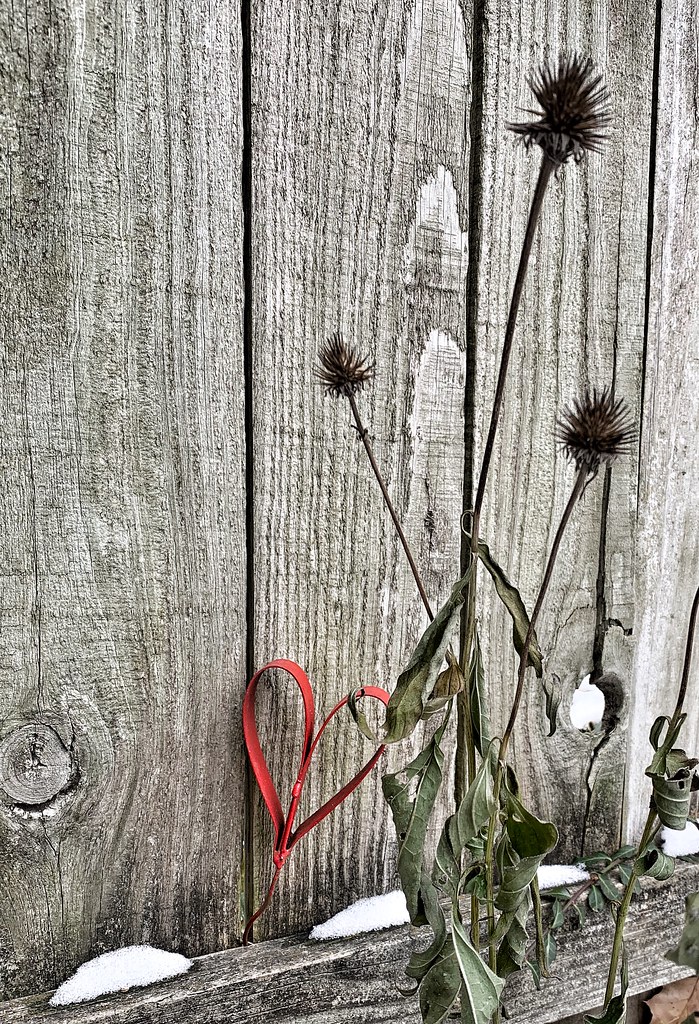 Apps used and backstory: I was doing a final clean-up of my gardens and the red heart next to the weathered fence caught my eye. It was a spot of color in the otherwise bleak garden with the dried out coneflowers and withered leaves. As a result I made this image to capture that contrast.
I used the Snapseed app to provide some minimal edits. I cropped the photo a bit to emphasize the coneflowers and red heart. I also added some contrast and structure to make the fence standout. Then I used the dodge and burn tool to add a little saturation to the red heart and leaves. 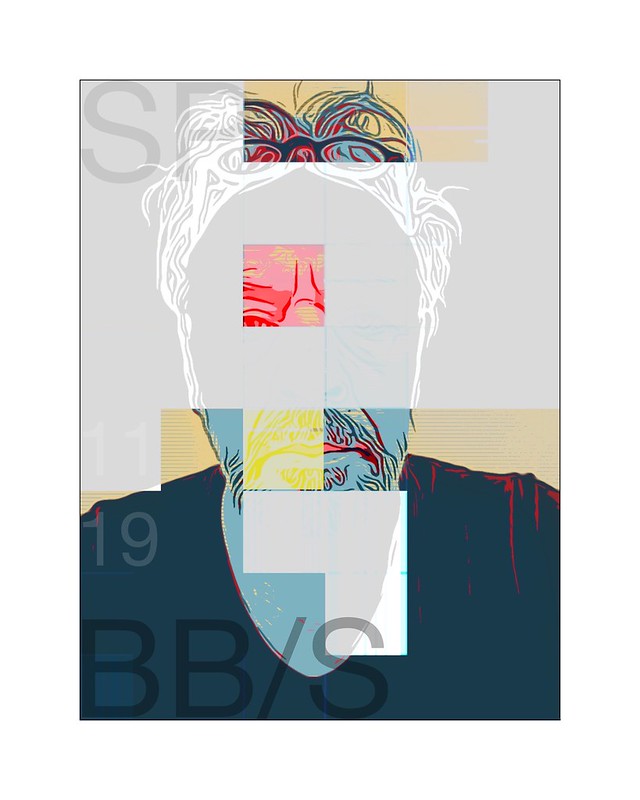 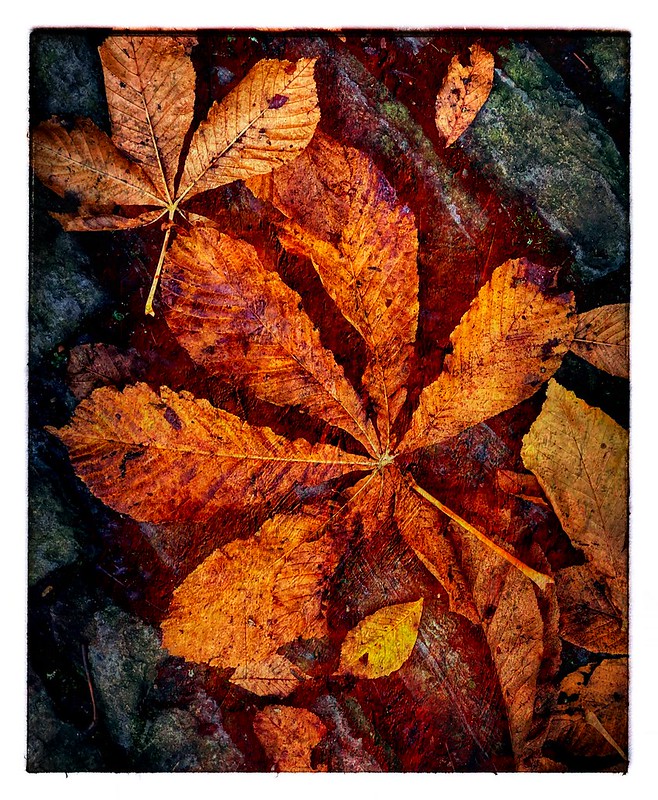 Apps used and backstory: I have enjoyed using the iPhone to take pictures of autumn leaves. These were on a cobbled yard which gave a nice dark background and the graphic nature of the (found) design was enhanced by Snapseed and a little texture from Distressed FX. Sadly the native Horse Chestnut (“conker tree”) is under threat from disease so it was good to find these in good condition and make a pleasing image from them. 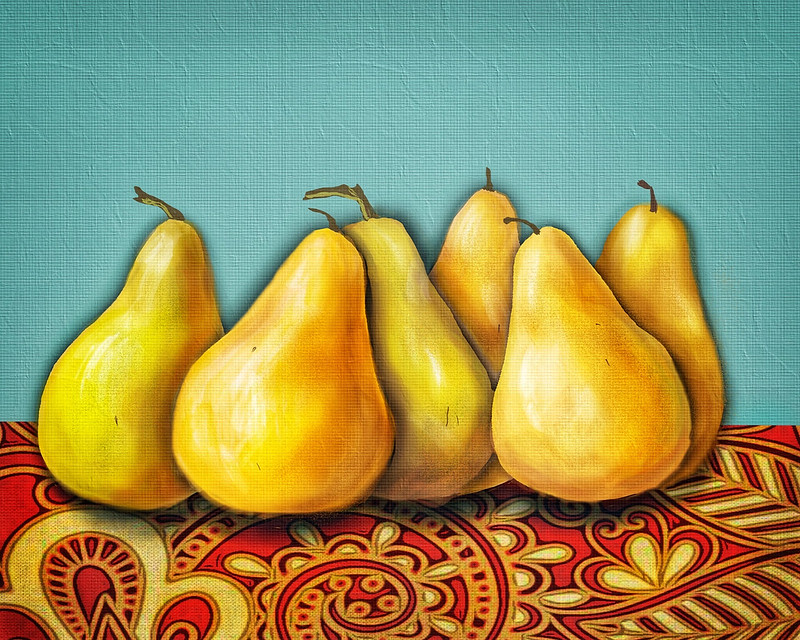 Playing with pears by rita colantonio

Apps used and backstory: Still working on my still life series and thinking of Paul Cezanne’s paintings, I thought of an older photograph I had taken years ago. I wondered how I could change it with painterly editing on my iPad Pro. I photographed the photo with my iphonexs and opened it in procreate app. The original photo had three pears lined up so I experimented with duplicating each one in a different layer and creating an arrangement of them, overlapping some pears. I painted each one with my Apple Pencil, focusing on shadows, color and light. I wanted to keep Cezanne’s style going so I used bright colors and lots of line. I created a layer with an IColorama texture for the table. Then in IColorama I made other adjustments including texture and color.