This week’s Apps Uncovered presents a selection of what I found to be the most interesting for the past week in our Flickr group, across a wide range of styles and subjects.
This week’s Apps uncovered title just sprung to mind as a commonality between certain images.(Even if just a hint of it.)
Our lead image from Kein Grund presents a measure of drama that draws us into an unknown story. A few theatrical images follow, closing off with a moment of natural glee and a little bit of prettiness.

No matter what we have to deal with on a day to day basis, may we brave each new one with eager anticipation.
Or at least fake it to we make it. 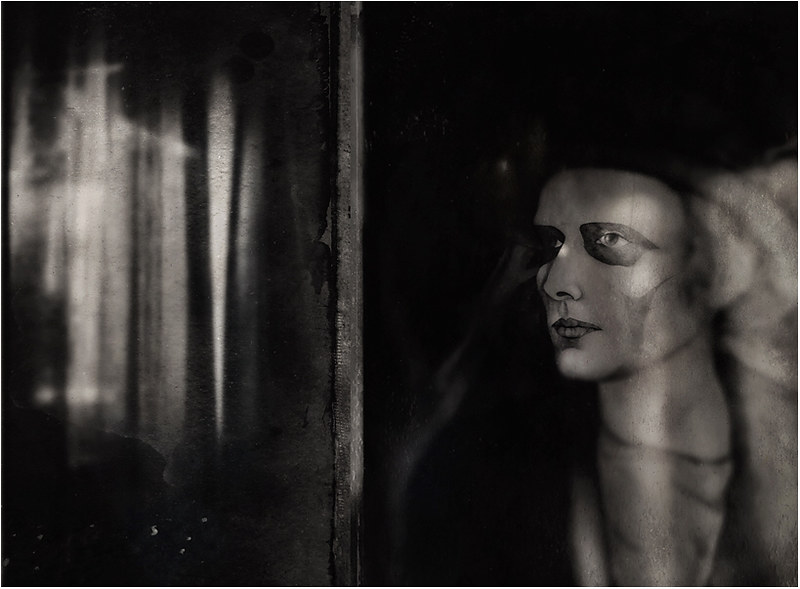 Backstory:
The processing is mostly the same: I combine two pictures in Diptic, adjust the colors and contrasts roughly. Mostly I make several versions with different colors and tonal values and then I mix several versions in Superimpose, try different mixing methods. Also in this case, I mixed a softer version of TinType with a sharper version. Last I cropped the diptych in Snapseed, adjusted the brightness and the contrasts and pulled a thin white frame.
The left picture of a curtain blowing in the wind was made in Vienna in a hotel room – with Hipstamatic, but without lens and film. The right photo was taken at home in my working space, with the iPhone6 camera. It shows a watercolor painting that I painted over 20 years ago. Because it “always” hangs there, I don`t really see it anymore. But on that day sunlight fell through the window on the image and it was like a spotlight, directing my gaze to it.
This painted picture is more “my father” to me than any photo of him! Because there is also in addition the painting process “in” the picture and that always had something to do with him……
The title of the picture was “To the unknown man”, although my father was not unknown to me, but we lived together. In my childhood he was the only man I ever knew who always wore a hat and a coat and thereby looked “respectable,” so distant, so dignified – at least outside the house……
And now I had a dialogue with this “unknown man”, which he was for me at that time. Even though my father has been dead for a long time now, I’ve gotten to know him better over the years and now I see him differently. Because I now know myself better – and I have much more of his characteristics and quirks and emotions than I wanted to believe earlier.
I found the curtain suitable because the light on this day actually fell through a curtain and was softened the contrasts, on the other hand, because it seems to me as if a curtain slowly moved away and my father is coming out more and more clearly behind it.

The picture is painted in color, but when I got the TinType app new, I tried it with all kinds of pictures on my iPhone and for me this black and white and the nostalgic look matches the picture much better than the original colors. 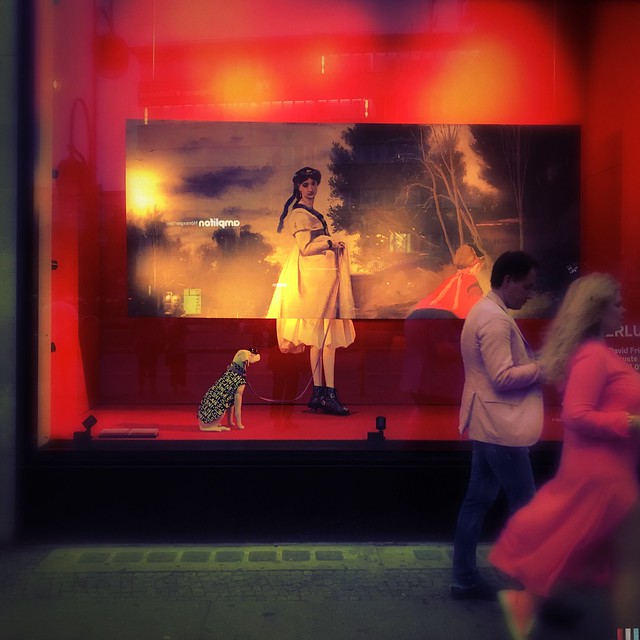 Apps used: Hipstamatic with Sergio lens, Blanko Freedom13 film and Apollo flash.
Backstory: This is part of my 365 day series using the Hipstamatic app with the shuffle function and no post-processing. I loved these department store window dressings using paintings with the addition of mannequins telling a story. The moving couple seems to provide a new plane leading the eye into the painting and their colors blend perfectly with the background. We’re really not sure if they jumped out of the window. 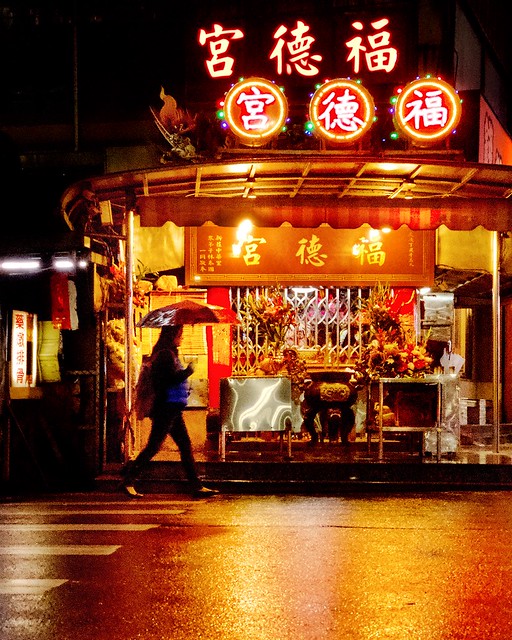 Paul Yann * Have virtue, will merit. The abode of everjoy is guaranteed.

“Have virtue, will merit. The abode of everjoy is guaranteed.” by Paul Yan

Backstory: A Taoist shrine on a street corner in Taipei, dedicated to the God of Land and Prosperity. The neon signs depicts the shire’s name “Abode of Merit and Virtue”. It encourages people to cultivate their virtue so that merit and joy would automatically be endowed like an umbrella that shelters them from rain.

The wet tarmac that reflected the neon lights made this street corner even more splendid. With the ProCamera app manually set to 1/60-second shutter speed at 200 ISO, pre-focused at 2 meters on the ground in front of the shrine, I released the shutter when the lady with an umbrella walked past the end of the zebra crossing where her silhouetted profile would contrast with the side-door of the shrine. 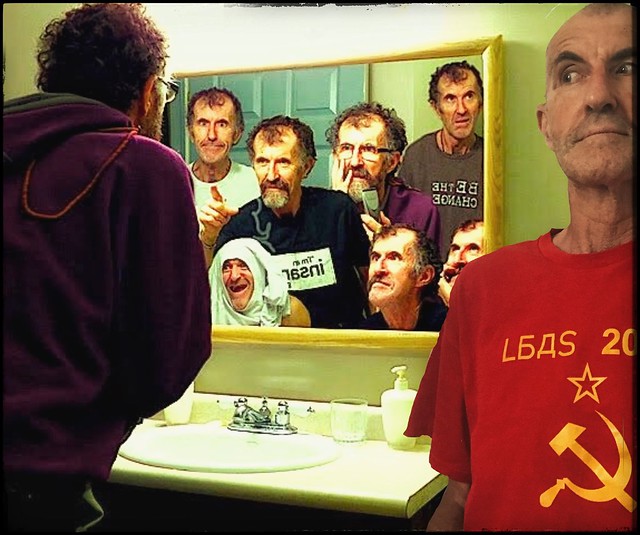 Apps used: Juxtaposer and Snapseed.
Backstory: The original pic I used was done in long before apps and iPhone were a part of my life. I decided to update it when someone faved it. If I’d had the apps and the experience I’ve gained, the multiple characters mirror scene would have been done much quicker. Anyhow seven years on I thought it was time to update it and put my current format in the picture. Before putting me in with all the other nutters, I did a few adjustments in Snapseed to rough it up a bit then over to Juxtaposer to add the 2018 model, (deliberately smooth and sharp) place it, size it up and clean it before some final touch ups in Snapseed and the final product. A wee tribute to those of us who can relate to all that we are and the muti- faceted aspects of BEing HUEman/woman. 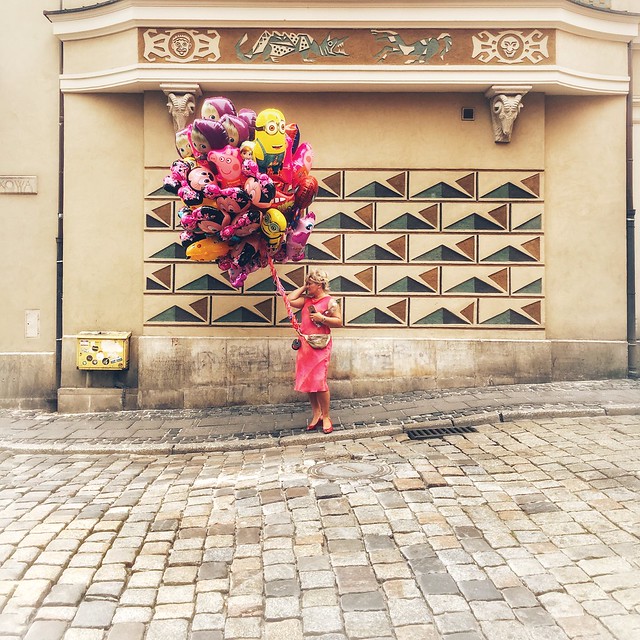 Apps: Snapseed
Backstory: I took part in annual county fair in Poznan and when I was leaving it, I spotted the lady with a bunch of balloons. I took a shot, but there was too much noise in the background. So I shooted again from a different angle and this time it was much better. This is why I like street photography: you only have one or if you’re lucky – two chances to capture an interesting moment. 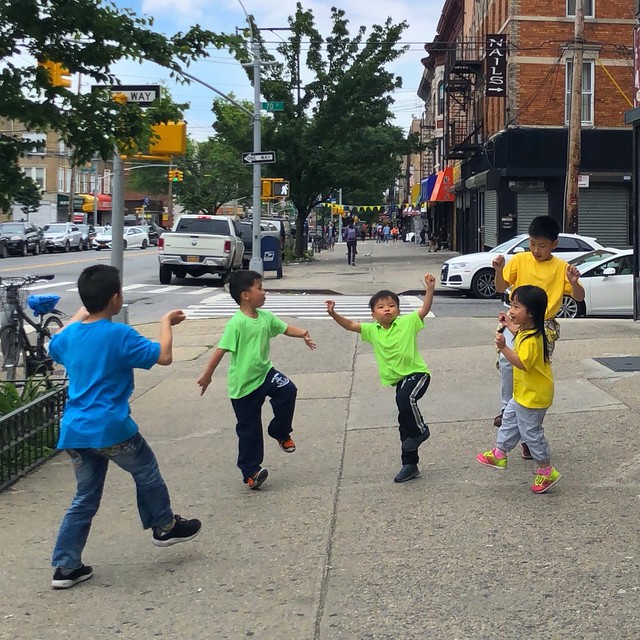 Shel Serkin * Dancing In The Street

Apps: shot with an iPhone 6 using the Camera + app.
Backstory:
It was edited in Snapseed for adjustments in color and contrast, iColorama and Brushstroke for a painterly style.
I love nature, especially flowers. Each spring I shoot a series of flowers from my garden, in various cobalt blue glass vases. One of my favorite flowers is the bold and delicate bloom of the Hydrangea. This year the color was a vibrant blue violet. I recently received this bright green glass vase as a gift, and thought putting the two together would make for an energetic combination. This vignette sits on my mantle, reminding me that a little tart, mixed in with sweet is always delicious.