This week’s Apps Uncovered explores images across the creative spectrum – no attempt to discern a common thread, other than excellence! Tuba Korhan’s imaginative and eye-catching collage is the lead image for this week’s selection. The combination of whimsical edting and thought-provoking quote makes this a very compelling and deep image.

You need a village, if only for the pleasure of leaving it… C.Pavese by Tuba Korhan

Backstory: I always loved to be surrounded with animals, I think we can call any place home if we have our loved ones by our side or even an old photo of them which reminds of good memories. We may call them dogs and birds, cats or fish. Yet, it is only love with a different name! 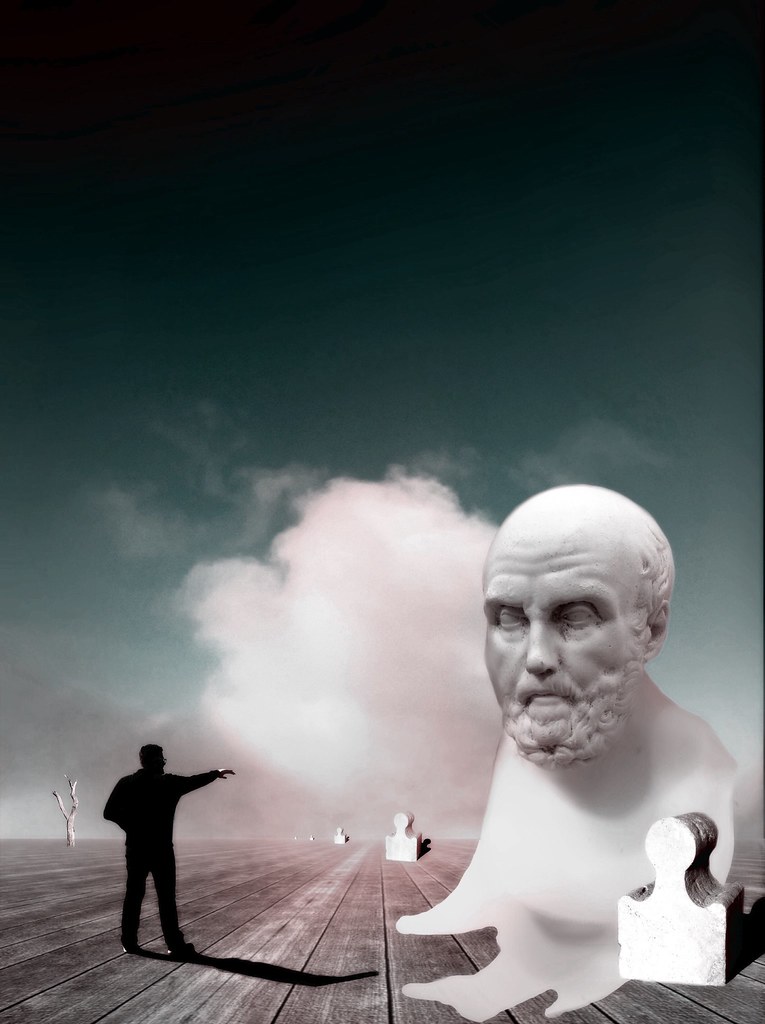 Dematerialization of Philosophy by Chad Rankin

Backstory: This image was made solely on my iPod touch 5 gen. The image is my take on the loss of philosophical reasoning to today’s social issues. We are a society quick to point the finger at someone else to take blame. It’s like building a puzzle with the pieces that all look the same. 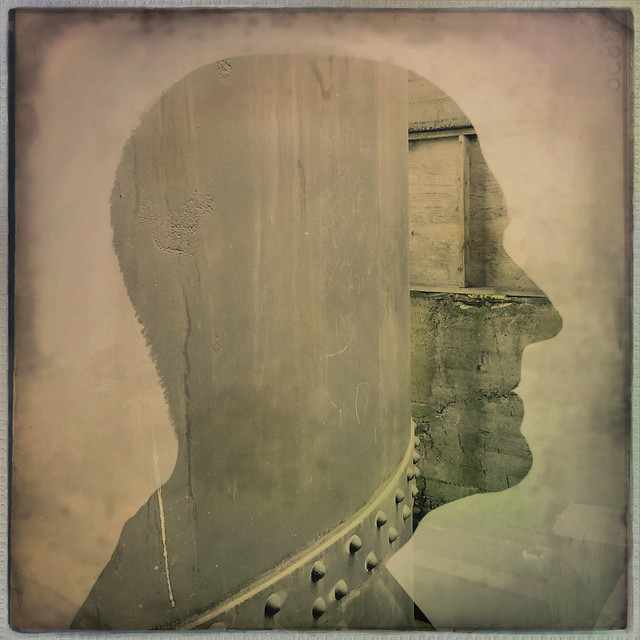 Apps used: It’s a double-exposure, which Hipstamatic does right in the app itself, so I didn’t do any editing after I took it.

Backstory: I took a silhouetted photo of my friend, Nicholas, and printed it out on paper. I carry several silhouette photos of different people with me when I go photographing, and I do double exposures, first photographing the silhouette, then photographing something I think will work to fill the silhouette. I can’t see the first image when I take the second image, so I have to guess how they will fit together. I like using a recognizable human form, but doing something less literal than a straightforward portrait.

Apps used: I began with Art Swipe. I had imported some of my images from my iPad into this app, so I was not stuck with the museum images that come with the app (I don’t use other people’s images in my work unless the work is directly commenting on that image.) As I played around “swiping” images, two came into play together forming the head and legs of the woman, and I needed a body. I wanted a particular one, and I couldn’t get the body to line up correctly. I went to Procreate and lined up the three images to make the figure I wanted. I removed the backgrounds and made a png. I brought the png. int Enlight and iColorama, but ended up only using the Enlight version. I made three and brought them into Procreated where I composited the image and layered using blend modes. I created the dots and writing in Pixelmator and brought the PSD file from Procreate into Pixelmator using iCloud drive. I worked on it more there, then spit it out and used AntiCrop to give me a more appropriate water border around the figure than I had. I made final tweaks and published it. Of the four images I used to create this, one was shot and unedited (the water tank); one was a street photo shot at the beach and edited in Snapseed; and two were fully formed composite images I had created and published earlier this year, repurposed to look entirely different than either of the former works.

Backstory: I was having a tough week. Teenage angst and what he perceived lack of surf time at the beach and lack of driving hours on the road toward his license were taking a toll on my son, and everything became a battle. The issue was always around communication (or a “failure to connect.”) I finally reached a breaking point and just needed to make a work about that as way to deal with the situation for my own sanity and a release from the tension. Perfect! Issue solved. 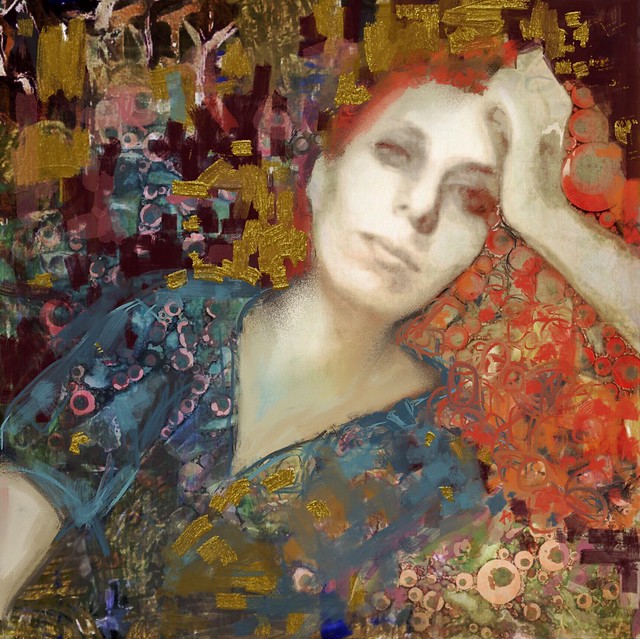 Apps used: Digital painting of a friends self portrait. Used ArtSet to Paint in portrait. Using layers created in percolator, and Icolorama Superimposed onto painting. Repainted in some movement and Snapseed tweak.

Backstory: It began with a friends self portrait (top left). It read perfect for me to paint.

I had just watched , Woman in Gold and was once more inspired by Klimt.

The gold in her portrait and shirt called out to me for this project.

First: I created several layers, One in percolator , a couple in icolorama.

These were designed as abstract compositions .

Using superimpose I blended all layers. I then took it into icolorama and used bristle brush to isolate her face and hand.

I blended with previous composite of abstracts.

While I appreciated the composition it still felt incomplete. Now came the difficult part. To not be attached to ones work.

I began painting in ArtsetPro isolating her form. I might stil work into this one as it lends itself to a whole different story. Aiming to finish this particular portrait I forced myself to paint freely with no should be etc.

I painted in her arm etc etc, this particular piece made me really fall for digital painting. A fine replacement for traditional painting which requires far less clean up. 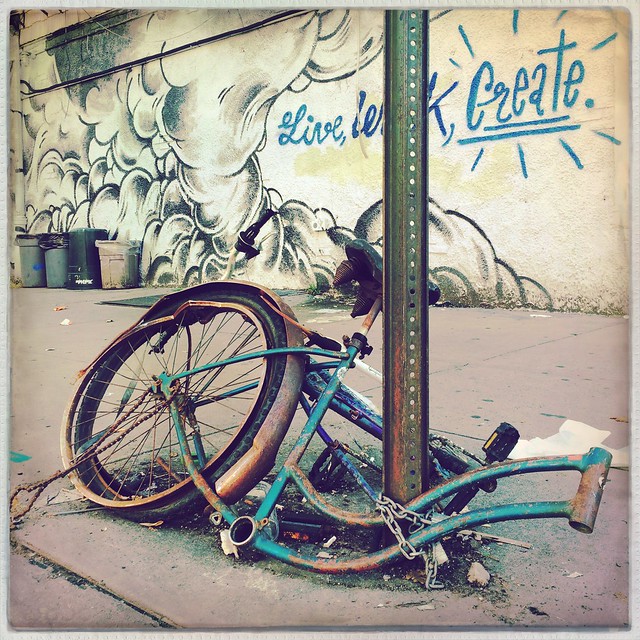 Apps used: I shot this with my iPhone 5S, then processed it in Hipstamatic’s Oggl app.

Backstory: Just happened upon this scene while wandering around Brooklyn NY. As most iphoneographers, I typically have my phone in hand with camera ready. 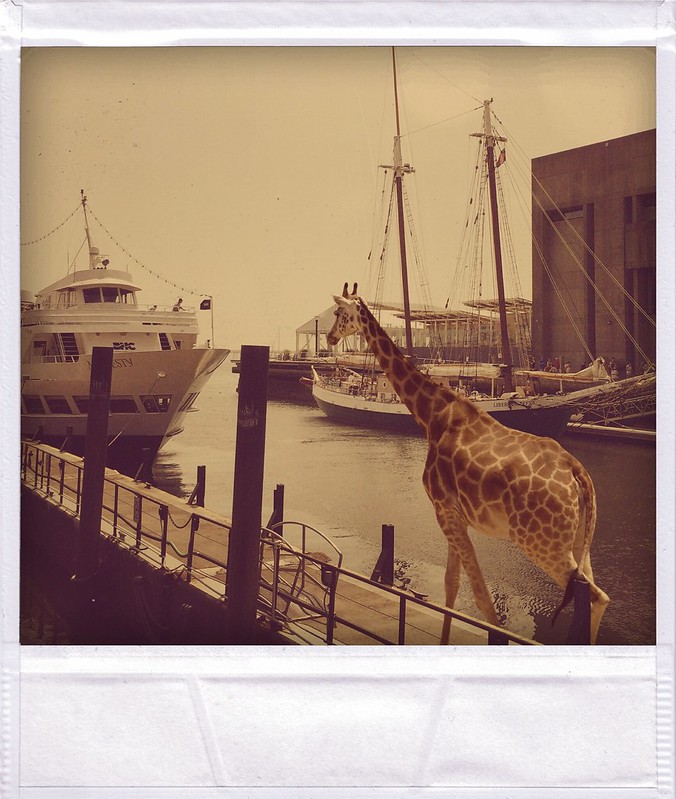 Backstory: I’ve been having a lot of fun lately playing with different instant film type apps, my favorite of which is the oldie but goodie, LoMob (LoMob was one of the very first apps I downloaded to my iPhone). So this image (obviously) comprises of two separate images. The harbor image was taken a few weeks ago in Boston Harbor. My oldest son was visiting from Seattle and we had spent the weekend in Boston over the Fourth of July; actually took this photo on July 5th and let me just say that I was insanely dehydrated from the night before . . . ahem. By the way, Legal Seafood restaurant does not have Gatorade on their menu as an available beverage, so just a heads up. The top image, the giraffe, was taken a few years ago while on a special tour of the San Diego Zoo Safari Park and she is one of three different giraffes I’ve used in my images. She was one of the more serious giraffes I had met that day, so I figured a harbor cruise would be good for her; help her loosen up a bit.

Apps used: The  picture was created by double exposure with union app and mexture.

Backstory: I always liked this technique of double exposure, the first picture is a picture of my son sitting on chair facing the sea, picture taken during the holidays, the second is my face. Right now I listen to David Bowie a lot, that’s why the title makes reference to the world of Bowie, I think we can imagine a lot of things, a photo, a referential title and imagination does the rest. I did a series of photos with double exposure and song titles, and writing too. I imagined the album covers with my photos. and I hope that it will please a Bowie himself 🙂 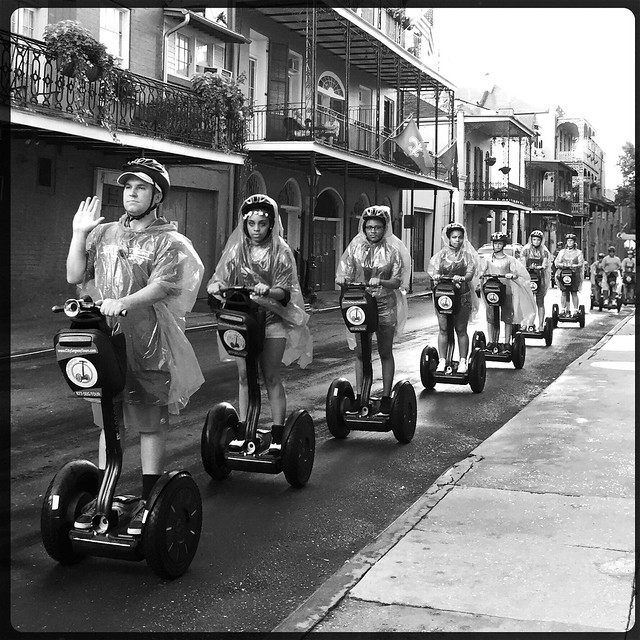 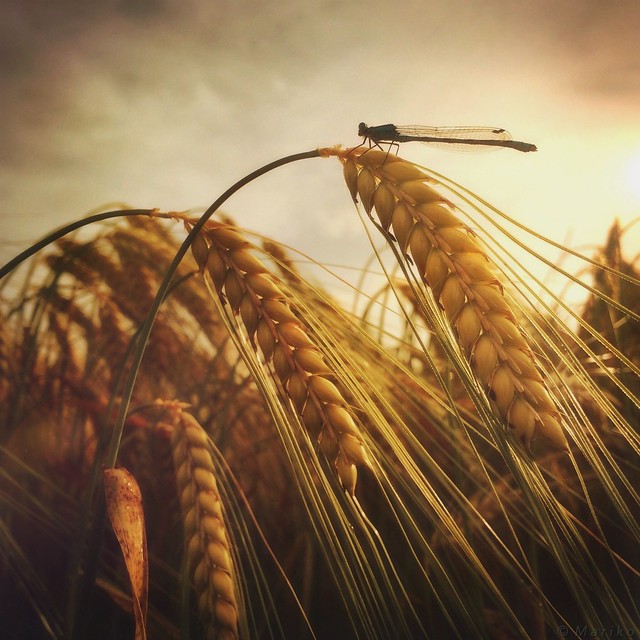 Basking in the Morning Sun by Mariko Klug

Apps used and Backstory: On my early morning walk I found this damselfly on a barley ear waiting for the dew to dry out.

This photo was taken with Hipstamatic Jimmy lens and Blanko Freedom 13 film with effect flash on. With PhotoToaster I cropped it slightly, added warmth and a vignette, then used the lighting brushes to lighten up the barley ears. I intensified the sunlight using LensLight and to finish applied the Flare filter of Mextures and the Valentine filter of Picfx.

Apps used: I used Matterapp to add the tentacles, iColorama for the illustrated effect; paint masking, and blur masking over the standing figure. Reflect was used for the water and I ran the finished photo through Stackables, tweaking it to my desired tones and textures.

Backstory: Harvesters is a sequel to another photo of mine entitled “The Reaping”. My love for science fiction and HP Lovecraft’s Cthulhu mythos inspired this one. 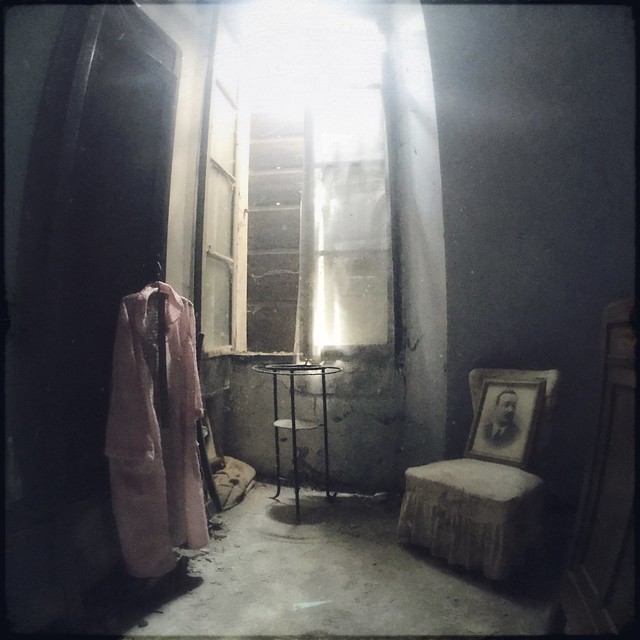 As in a mirror by Federica Corbelli

Apps used: I Shot pic with iPhone 6 and edited it with: Snapseed, Stackables and Enlight

Backstory: I shot this pic in to a bedroom of very old abandoned mansion . Every objects in the composition were left as someone had just gone, freezed in time.