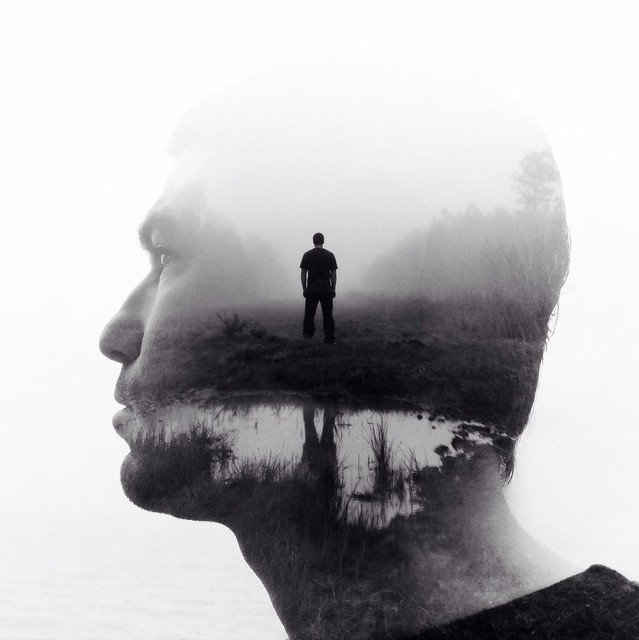 Mystery lies within by Brandon Kidwell

Backstory: This image has two meanings and sources of inspiration. The first of which is within a three part series I titled Introspection which were all Double Exposure style edits showing a different aspect of mental states. This image represents the mysteries that lie within ourselves. I wanted to somehow portray an image of both mystery and the search for which I hope I accomplished here. My face looking off into the distance represents the search and the silhouetted figure standing in the marshy fog represents the mysteries that lie withing.

The second and more personal backstory to this image is the silhouetted figure standing in the marsh is my son. Mobile Photography has become a passion and a hobby of convenience and I rarely ever go shoot just for the sake of taking pictures for lack of free time. I tend to pull off the road enroute to work to or while killing time waiting to go somewhere so mobile photography has become something that I don’t get to share with my family as much as I’d like. This particular morning my son was passing me coming home from work as I was on my way into work and he saw me standing in the mud in my work attire setting up my tripod to silhouette myself to have a figure in the frame. He stopped jumped into the frame and we got to spend some time just hanging out in the mud. Seems like a simple moment but sometimes those unplanned incidents mean the most. This shot blends both of us into one image and reminds me of moments such as that with my son. 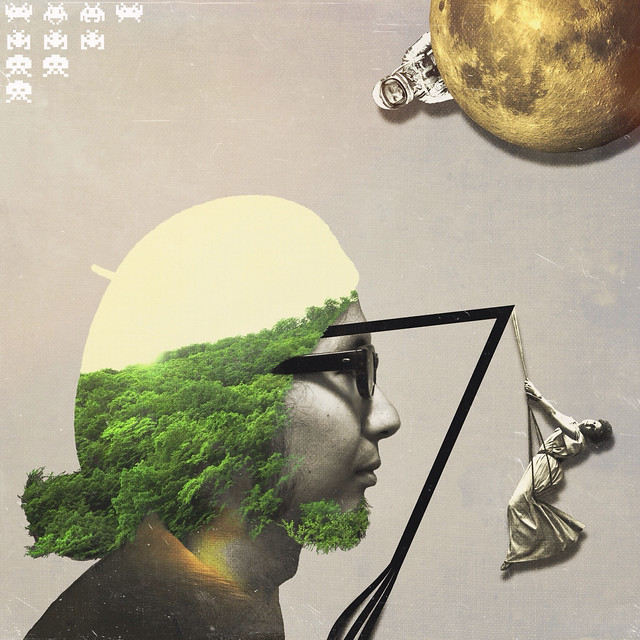 Backstory: I wanted to mix my photos with collage elements and multiple exposures.
The goal of this work is to create a “science fiction” atmosphere that is strange and creepy.
I also used several texture apps and free texture packs 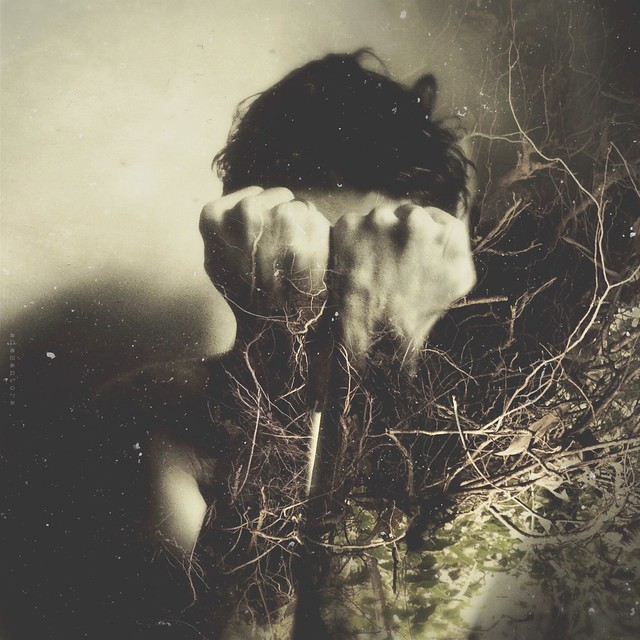 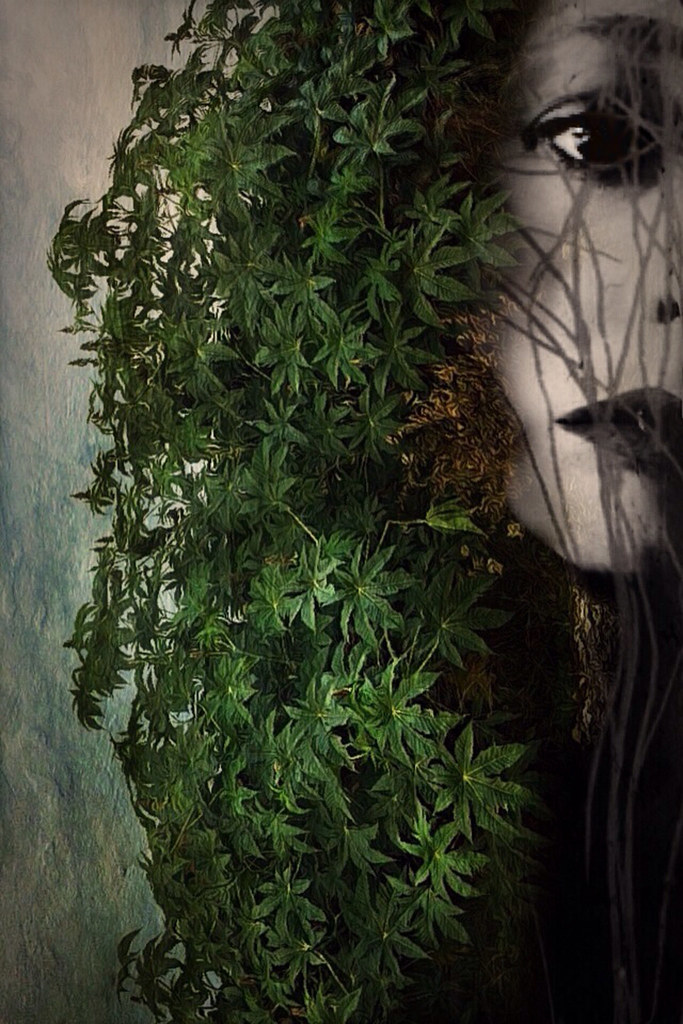 Apps Used: I took this photo with İphone4 and used the ShockMyPic, Blender,Facetune and vsco cam to process it. 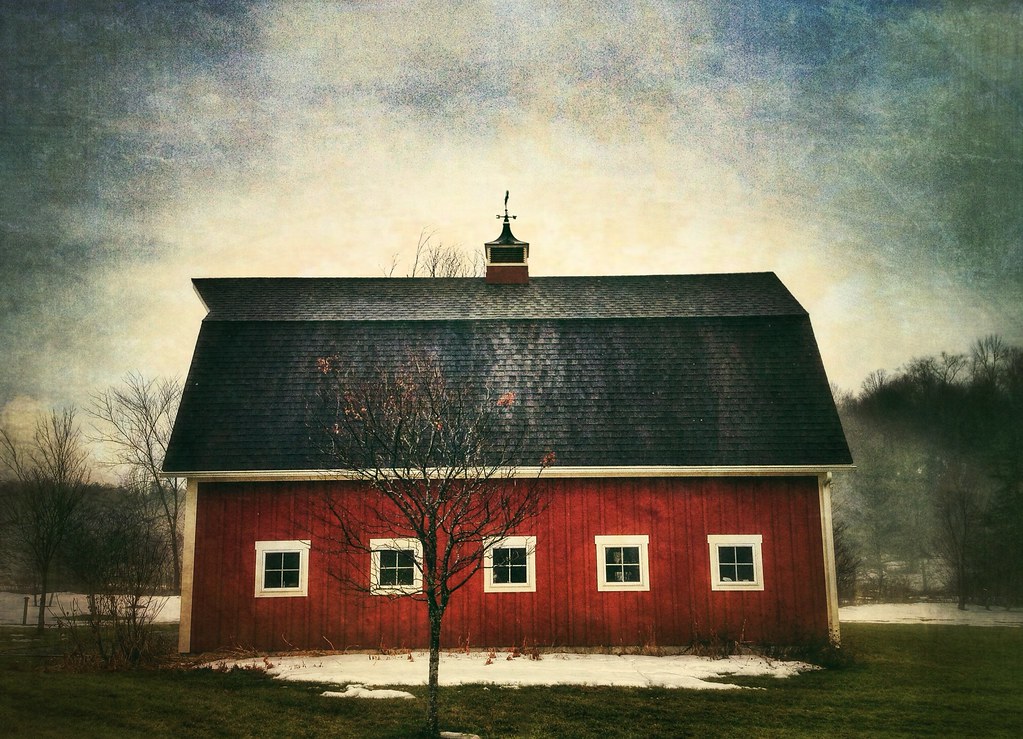 Backstory: So here’s the scoop: we’ve been having a crazy Winter up here in Vermont. It started with a lovely spell of freezing rain, followed by a deep freeze (yeah, that “polar vortex” thing), and then a nice warm thaw that lasted for about a week. And though we’re back into another deep freeze right now (-29F when I got up yesterday morning), this picture was taken earlier during the thaw.

The strange weather had created the perfect conditions for this wintry mist. When I saw it out my window I quickly grabbed my iPhone and ran out to take some pictures. All I wanted were some cool moody shots of the mist . . . I had no intention of shooting my barn.

Anyway, I’d shot several pictures of the fog all around (a couple of them are on my flickr page), and I was turning around to go back inside . . . when I saw this.

All I had to do was get a little closer for the shot . . . which meant positioning myself on the melting sheet of ice I call my driveway. But I figured the picture was worth risking a broken neck . . . a few slips and close calls later, I had my picture.

When I got inside and saw the picture, I knew I had to treat it right. I’m new at this and I didn’t want to mess it up. Normally, I tend towards bold intense colors, but this called for a bit more subtlety. I tried to keep the editing in line with the naturally atmospheric weather I’d been blessed with.

I cropped the picture to remove the icy driveway I was standing in. In Snapseed I enhanced the details, dropped the saturation a bit, and added a touch of drama. Then it was into Distressed FX and PhotoToaster for texture and a slight vignette. I had a hard time finding the right combo of textures, but when I did I made an exaggerated version of the textured image which I then blended back in with my original shot.

I loved the result.

All that was left to do was remove this single annoying driveway marker that had snuck its way into the image. The markers line the driveway to let the plow driver know where the road is. They’re topped with a reflective neon green bit of tape to make ’em visible.

And the thing was bugging me to no end.

It was distracting and didn’t fit well at all with the rest of the image. Retouch took care of that though.

So that’s the tale. This was actually the very first image I made where I though afterwards, “Whoa, did I do that?” All these years I’d been taking pictures with my iPhone . . . and each and every time I was disappointed with the result.

Beak grass in the wind by David DeNagel

Backstory: I took this photograph in early November of last year at a reserve noted for its plant life and natural settings.

The beauty of this image is the implied motion of the windblown beak grass contrasted against the stolidity of the yellow wood trees.

I used only Hipstamatic. I shot many frames of this subject but this was one of my favorite treatments. In this case, I used the Diego lens and Uchitel 20 film, no flash. This combo provided me with an airy and gentle ambience surrounding the subject; at the same time, the almost Polaroid like “softness” of the processing, while still retaining detail, gave the image a desaturated, low key tone that was particularly appealing. 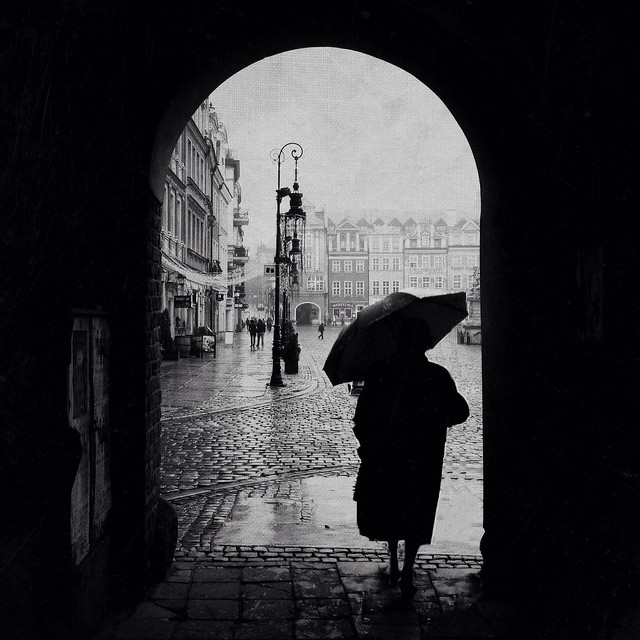 Backstory: It was a rainy day in Poznań, the city I work in. I was crossing the Old Market Square when I noticed an old woman with an umbrella. She stopped under the arcade for a moment – just to rest a bit. This was the moment I took the photo. I edited this photo with Snapseed, Mattebox and Mextures. 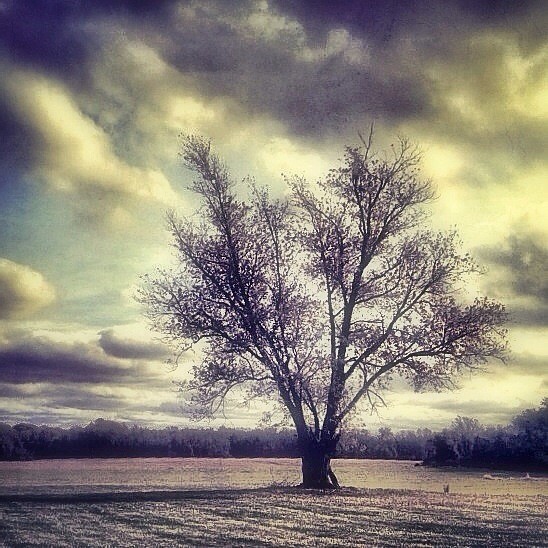 Backstory: This photo was taken before the weather really changed. I live in a very rural area of Maryland called the Eastern Shore – a large peninsula on the eastern side of the Chesapeake Bay – its charm has largely been preserved and much of the area remains undeveloped. Its roots are in farming and aquaculture and there are lots of marinas and recreational boating activity here. My parents were sailors, so much of my life was spent here part time. I moved here in 2007 full time and have been the caretaker of a 12 acre, family-owned waterfront farm. The property, sadly, is being sold this year, and I am taking advantage of photo opps while I can.

This shot was taken in a field nearby, and started out as a Hipsta shot with Sugar and Lowy. I liked the original, but wanted to create more mood. I made the clouds pop even more by running the image through the Clarity option in Camera+. From there, I used Snapseed to fine tune, then ran it through Miracam and the other apps mentioned for the filtered effects – I typically use Blender several times using variations of the image. I like to combine the Glow effect in PhotoWizard and the Sharpen tool. And I usually finish up again in Snapseed-I like the Center Focus tool a lot for its ability to move the light around – I play with that until I achieve that ” got it” moment.

I am entering my 3rd year of mobile photography and have enjoyed capturing my surroundings and hope that people enjoy seeing a bit of this very special place – the Chesapeake Bay, and the Eastern Shore. This region is a nature and landscape photographer’s dream – I hope all of you reading this have an opportunity to visit some day. It would be a great place for a photo workshop. 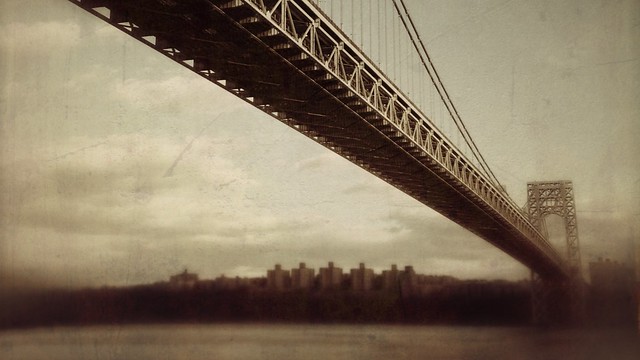 Backstory: This is a shot of the George Washington Bridge on the New Jersey side of the Hudson River (was in Jersey for a MUCH needed girls’ weekend) . I took so many shots of this bridge at so many different angles, but this is the only one I really processed heavily. I had originally processed this in a square format (my aspect ratio of choice), but it was after uploading it to Facebook for my timeline image that I decided to switch it up, crop wise. You know how Facebook will display your timeline image in the news feed as rectangular? After I updated my timeline to feature this image, and after catching sight of it in a rectangular format, I immediately cropped that square to become a rectangle in Snapseed. I like how it appears as though I may have shot this while in the river, not safe and dry on shore. I also processed this while taking a bubble bath; my image processing location of choice. 😉 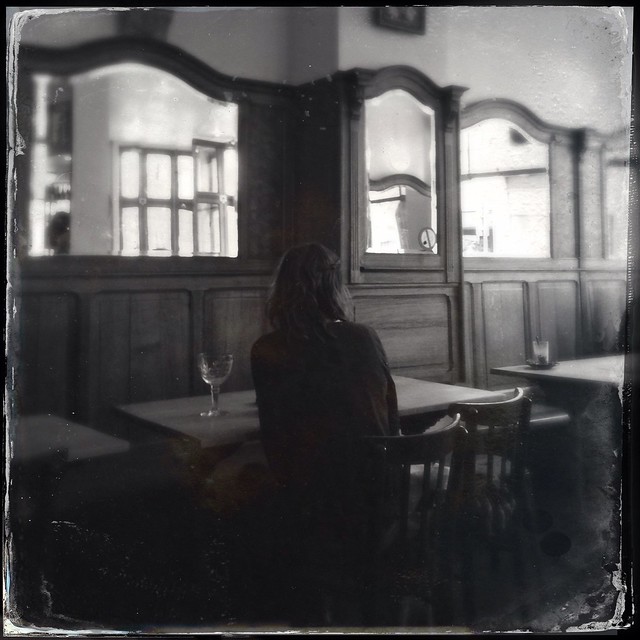 Backstory: I took this picture because I liked how the woman was sitting alone, with her glass of wine, turning her back to the room. There was something very powerful and moving in this scene. It could mean that she was sad and lonely, or that she was serene, being alone and not needing anybody. I will never know.

I chose the Loftus lens in Oggl, because the blurry vignette emphasized the woman’s loneliness, and the D-Type Plate film to give the picture a sense of timelessness. 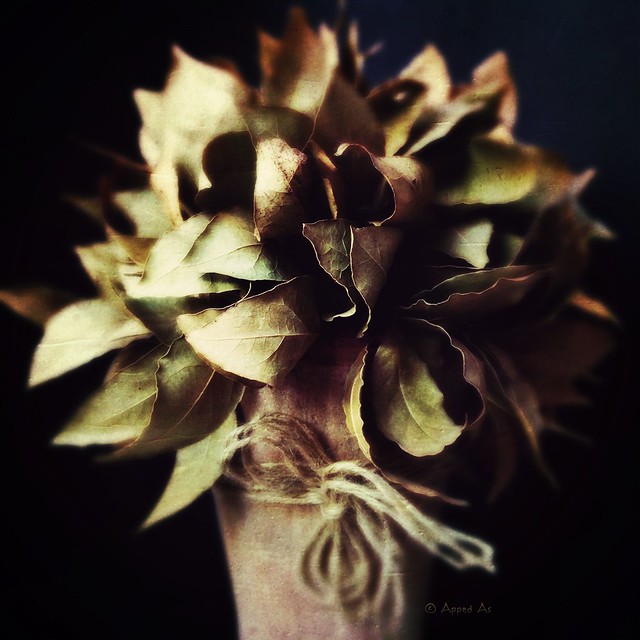 Backstory: This was a gift from a dinner guest which we left in one of our kitchen windows. The sun had faded out the leaves beautifully over a few months and I thought it might make a good subject in my make shift light box.
Taken in natural light from a side window with Oggl app and then played around with 2 different settings which I then blended with Blender then and finished it in Snapseed. 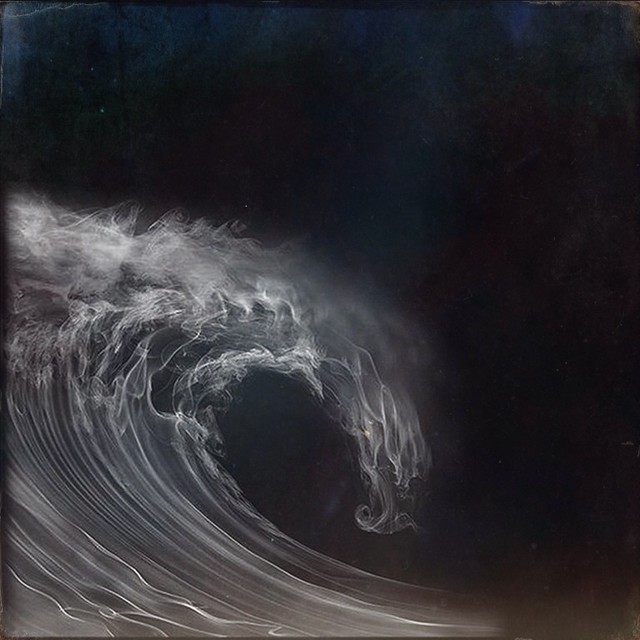 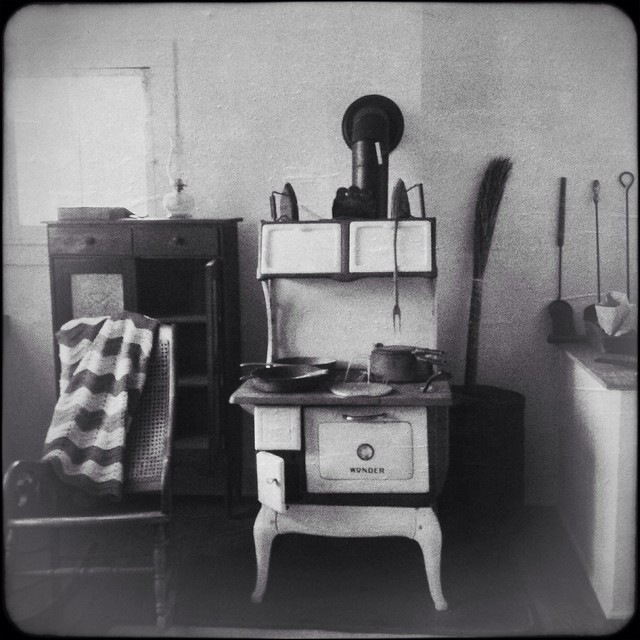 Backstory: This photo was taken at Blue Spring State Park in central Florida. The century old house is being preserved as the treasure it is. This kitchen is actually behind a glass enclosure, making the shot more limited. I placed the iPhone against the glass to eliminate reflections and shot from about 3 feet above the floor, composing the best shot allowable. I used Hipstamatic with the Yoona lens and Blanko1 film. The image was converted to B&W using B&W Studio and a red filter setting. In TouchRetouch some of the texture was removed. FilterStorm was used to straighten the image and slightly crop. A frame, grain, and texture was added using CameraAwesome. The image was shot using an iPhone 4S and processed on an iPad 3G.