Here’s a selection of what I consider to be the pick of the bunch from our iPhoneographyCentral Flickr group this week. Paul Yan’s wonderfully coloured beach portrait, “The boys are alright” steals the lead spot today. Notice how the group has been shot from a slightly low eye level, forcing the viewer to look up at the gang.) Also check out the same group of boys in Paul’s second photo “The sunset gang” to see another perspective shot with the sun behind them…

The rest of the photos that round out the top pics this week were created by the following artists and photographers: Jane Schultz, Stef LP, Catherine Caddigan, David DeNagel, Poetic Medium and Jeremy Cassell. 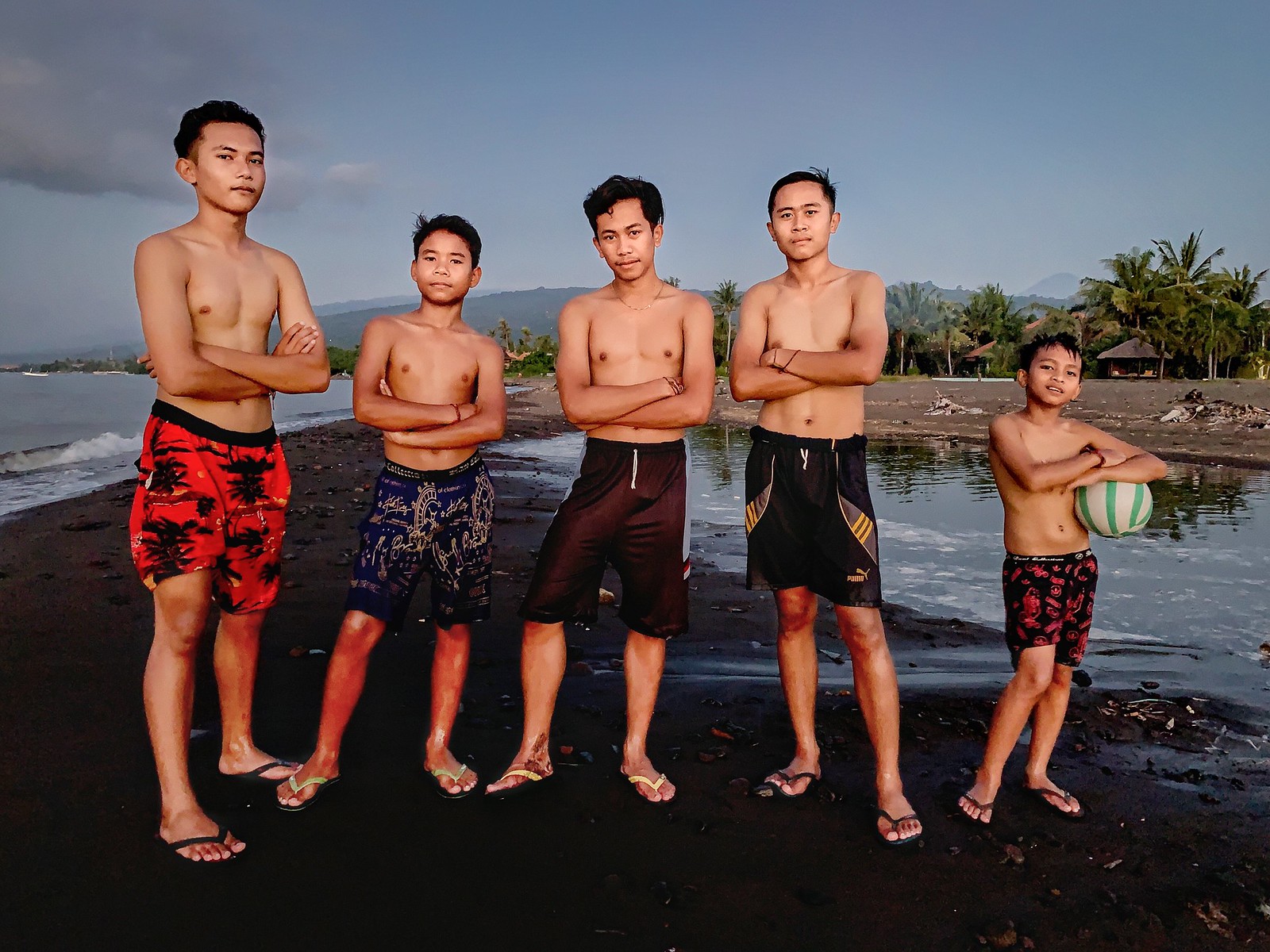 “The boys are alright” by Paul Yan

App used: Phone: iPhone XS Max
Capture app: ProCamera
Processing app: Lightroom Mobile + Snapseed Backstory: I met these lovely boys on the beach right outside of my rented villa in Banjar, Bali practically every late afternoon swimming in the sea or playing soccer on the sand until it was getting dark. A wonderful friendship was established as I chatted with them or watched them play and made photographs of them. I’ll remember them as “The Sunset Gang”. I wish all of them good luck and happiness for life.

The raw file was developed into jpeg in LightRoom Mobile and then lightly dodged and burned along with portrait lighting in Snapseed. 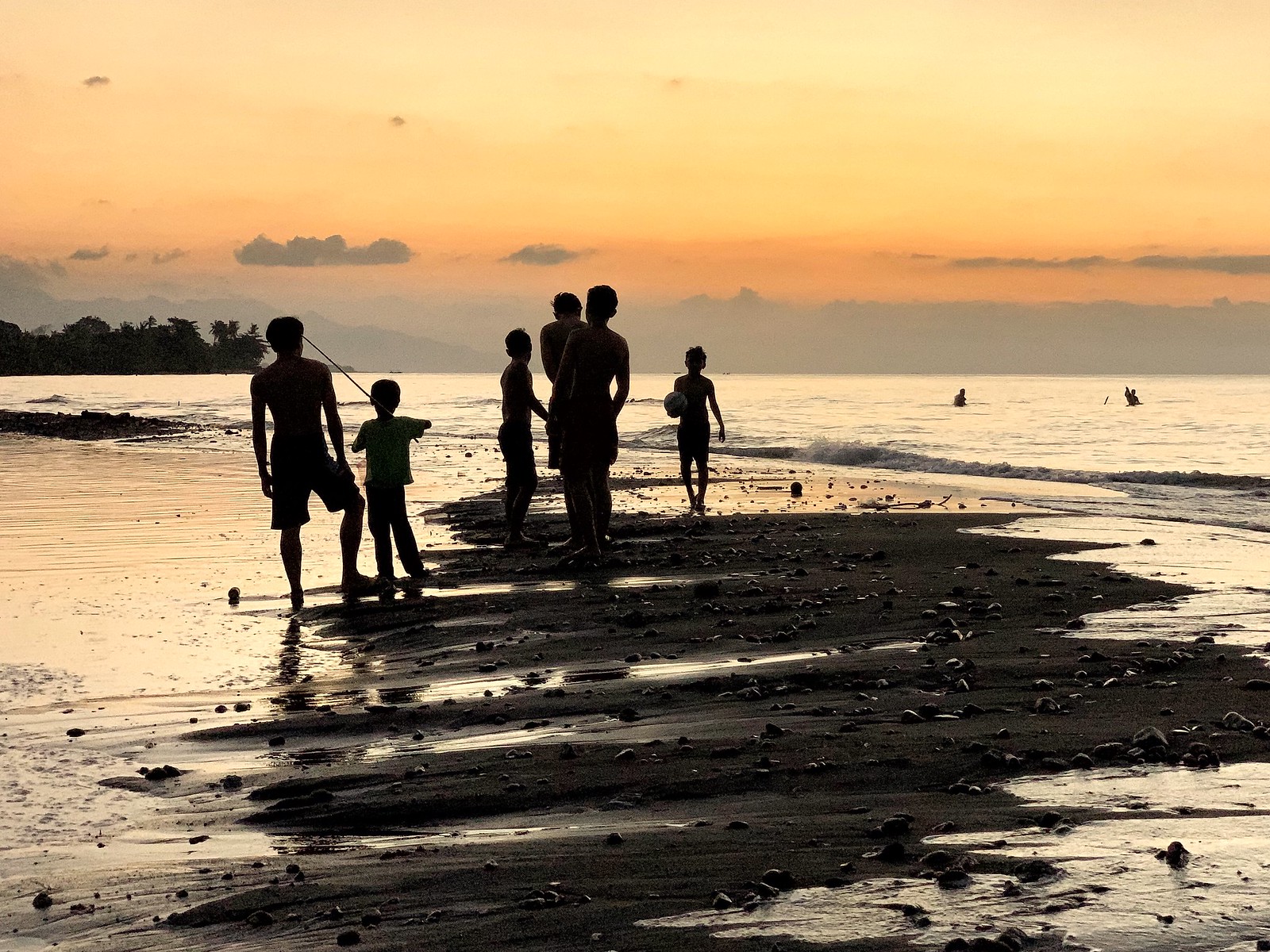 “The Sunset Gang” by Paul Yan

App used: Phone: iPhone XS Max
Capture app: ProCamera
Processing app: Lightroom Mobile + Snapseed Backstory: On the beach right in front of my rented villa in Banjar village, north Bali, the sun was setting, the boys were playing. I made a photograph to remind myself of the good times I was having. I didn’t know a friendship was about to be established between me and them.

The raw file was developed into jpeg in LightRoom Mobile and then lightly dodged and burned in Snapseed.

App used: Shot with an iPhone 7 Plus using the native wide angle lens. Processed with VSCO using the A6 preset. Backstory: This image was taken at a pond, located in a local botanical garden.  It was stocked with a huge school of goldfish.  I shot the image with an iPhone 7 Plus.  I chose to stand as close to the pond’s edge as possible, shooting an aerial view and using the phone’s wide angle lens to give the image immediacy and scope. I composed the shot to include a jutting rock, which gave the image scale; but it was almost as if the rock was a mountain peak and the dark night sky was filled with huge, swirling goldfish.  I shot many images of this particular scene but this one had the dynamics and balance I desired.  I processed the image in VSCO, using the A6 preset.

The Pianist by David DeNagel

App used: I used an iPhone 7 Plus and the Blackie app for this particular image. Backstory: This is an image I took of a demure, older woman playing a grand piano,in a local hospital. The pianist, a hospital volunteer, was named Dorie.  She was seated in the middle of a very large hall. The music (mostly classical)was intended to generate a soothing ambience for both visitors (like myself) and patients alike.

I was the only person in her immediate vicinity solely interested in both her (as a photographic subject) and her musical renditions. I asked if I might take a series of photos of her actually playing.  She smiled graciously and said she was very honored by my interest.  She asked if I had any musical favorites in mind; being a classical music lover, I suggested something by Chopin, which she proceeded to play in fine style.

This was one of my favorite images of the shoot.  I don’t think I will ever forget Dorie’s affable and soft spoken presence; she had an ingratiating manner which was, however, tinged with an undercurrent of melancholy. Her gentle personality resonated long after the music had stopped. 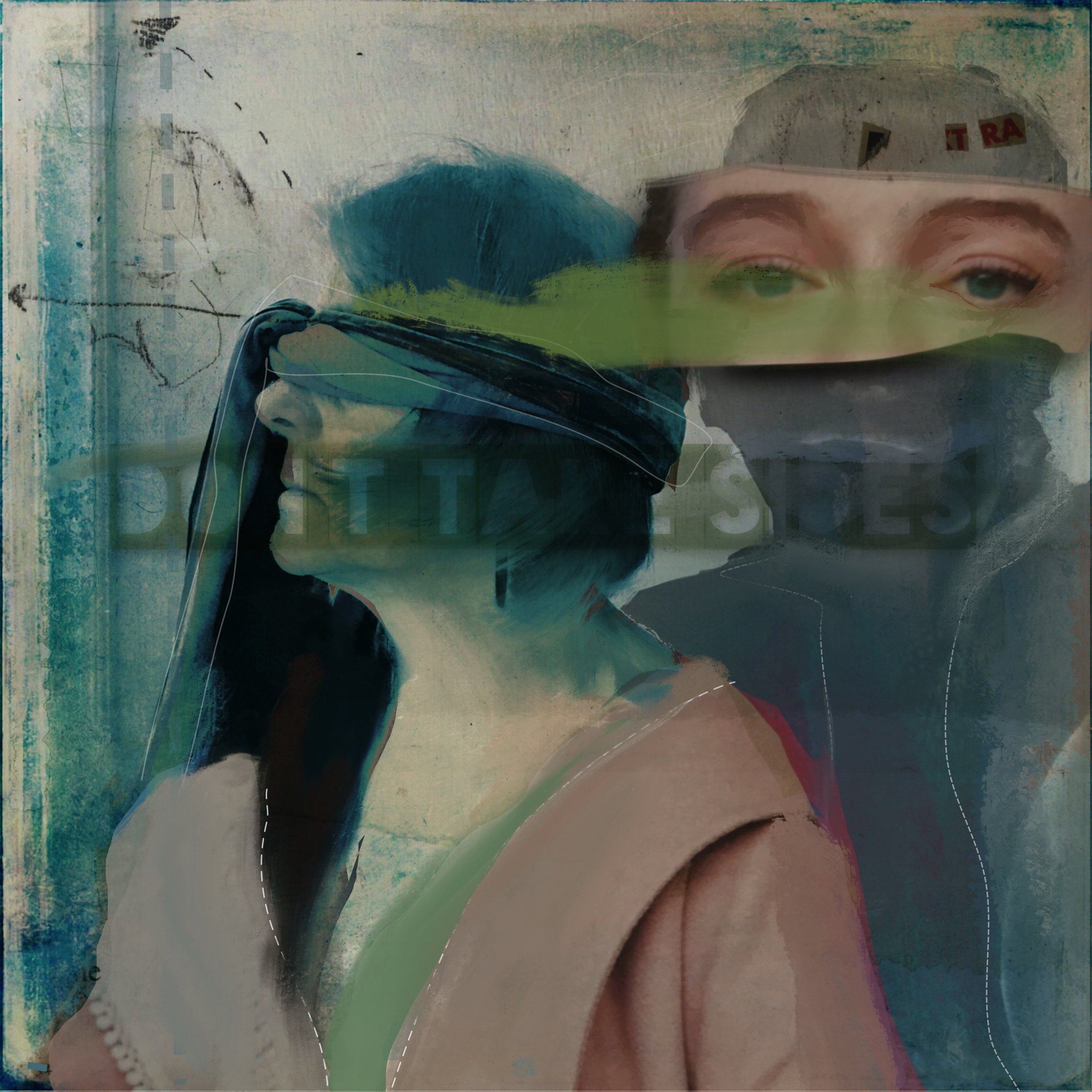 Don’t take sides by catcall (Catherine Caddigan)
Apps used: Procreate, Graphic, Phonto, Snapseed Backstory: I am often very aware of how I look in pictures, and how women (and men) in general present themselves, especially in this age of social media. It’s all about looking at ourselves and others. I think this has been going on through the ages, but it has become habitual in our age of electronic devices. I began with selfies, and some props. I have always collaged images, not so much to tell a story, but for the viewer to imagine one. The other figure in the image is a found image from an old magazine. There is a dichotomy here between the blind and the seeing, something that emerged only while I worked on the image. I don’t usually plan an outcome before I start.

The image was primarily created in Procreate, parts of the second figure are placed on three different layers, along with my own. After painting, and smearing and changing blending modes to get an image I was satisfied with, I saved a PNG and enhanced in Graphic and Snapseed. 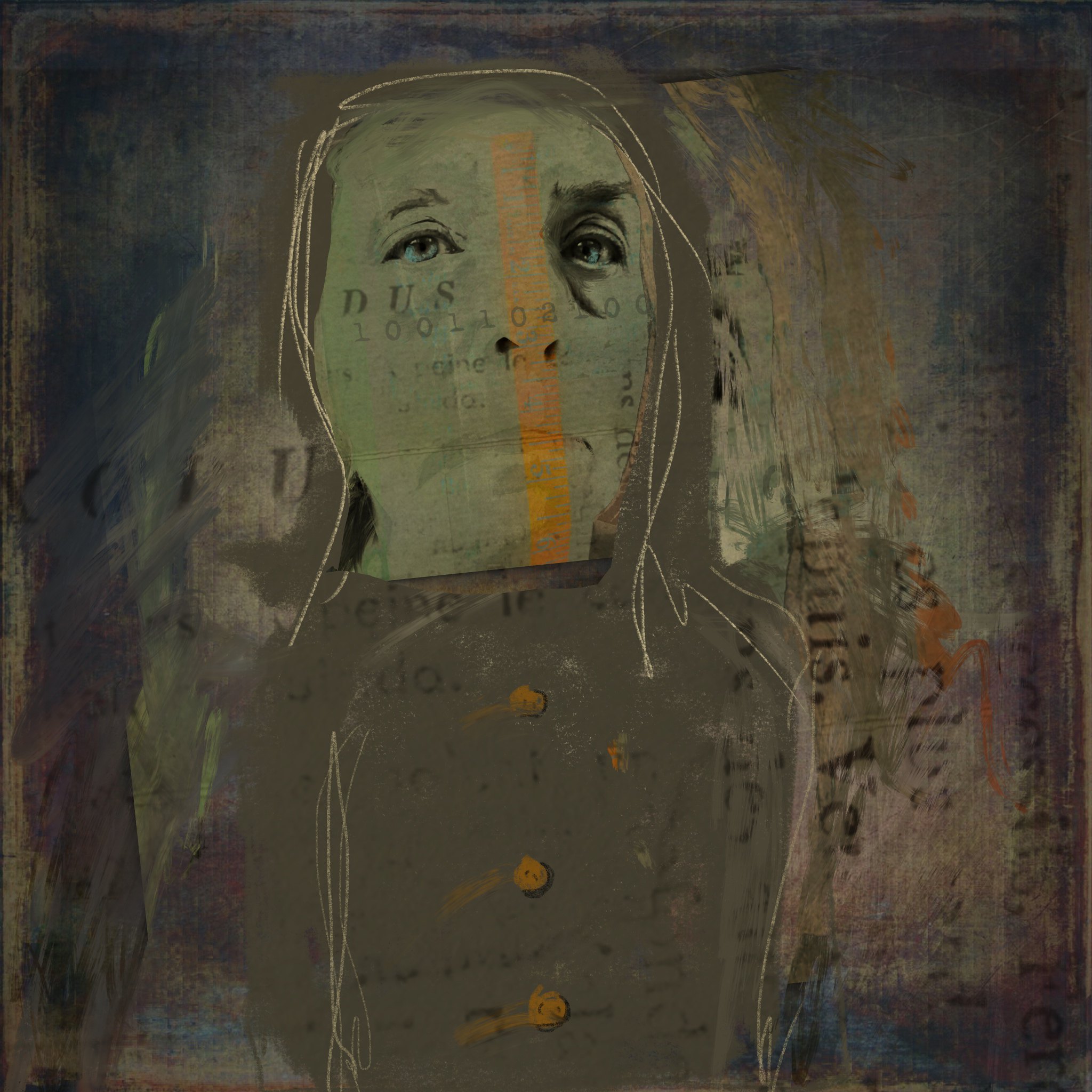 Don’t take sides by catcall (Catherine Caddigan)
Apps used: Procreate, Graphic, Phonto, Snapseed Backstory: I have to say that this idea is probably not new, though I have no idea what inspired it. (I always wonder if I ever have a completely original idea, because I look at so much art, and have all my life) I decided to use myself in an image, and began with selfies, and some props. I am often very aware of how I look in pictures, and how women (and men) in general see themselves, especially in this age of social media. It’s all about looking at ourselves and others. I think this has been going on through our history, but we have democratized it, made a habit of it. I explore that idea a lot in my work. The other figure in the image is a found image from an old magazine. In Procreate, parts of this figure are placed on three different layers, along with my own. This is enhanced in Graphic and Snapseed. I have always collaged images, not so much to tell a story, but for the viewer to imagine one. 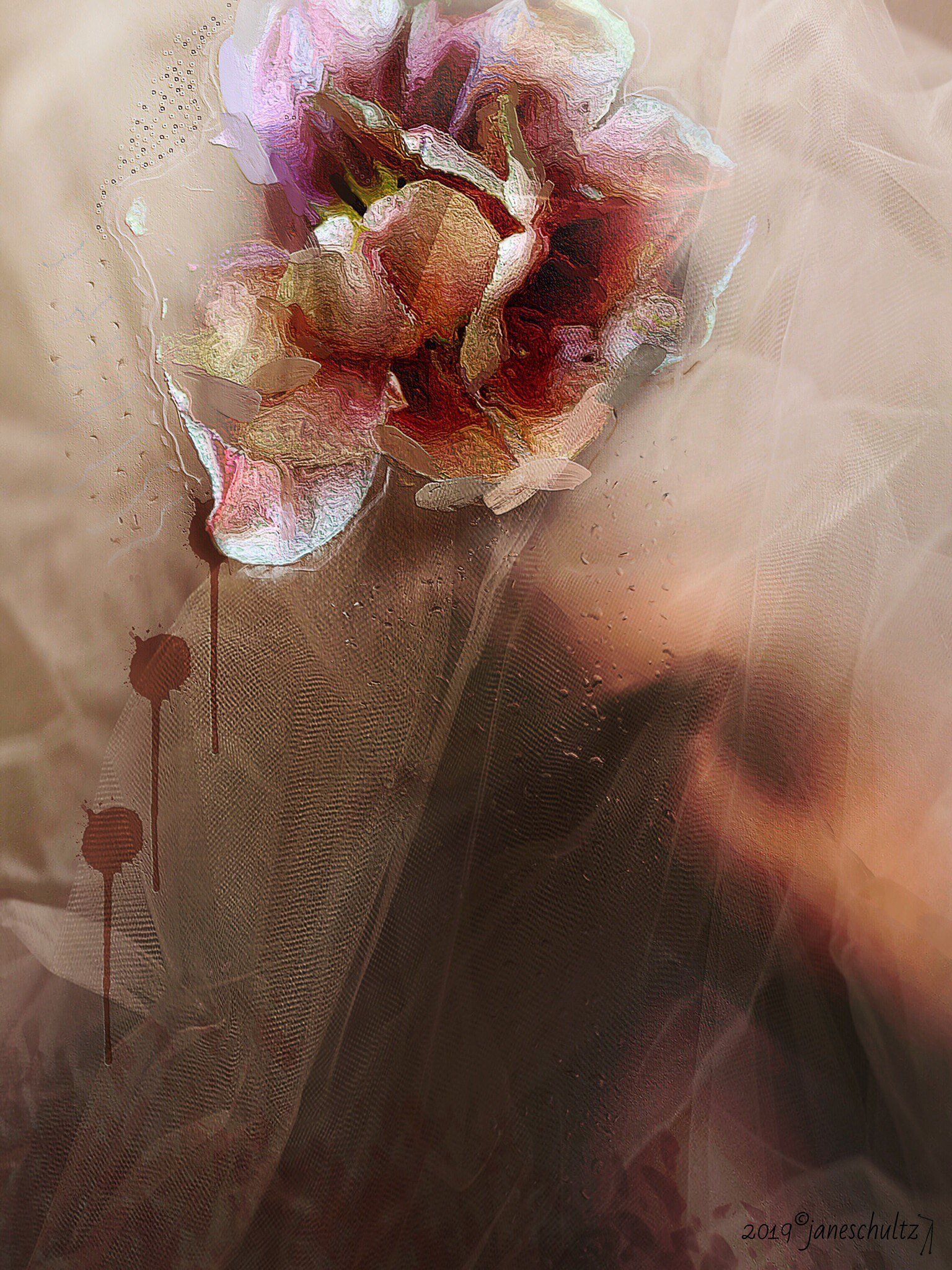 Apps used: Juxtaposer, Procreate, Glaze
Backstory: I love walking through botanical gardens and taking pictures of the beautiful blooms. Recently, I’ve been incorporating them into my portraits.

Outside awaits by Jeremy Cassell

Backstory: My girlfriend walked to our window to see what was going on outside. I loved how beautiful she looked just sitting there. She reluctantly let me snap a few shots. True love indeed. 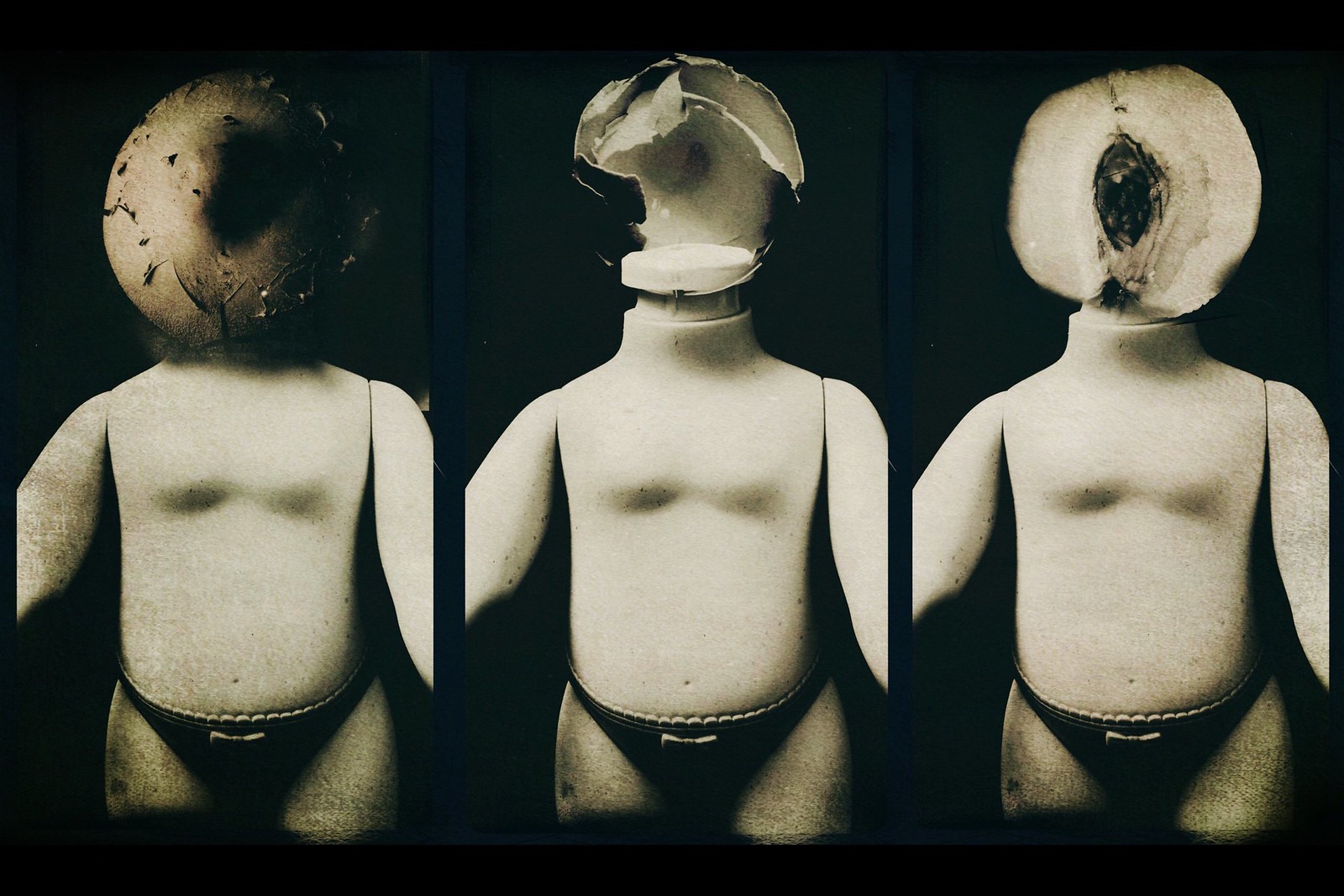 Apps Used: Dolls and replacement heads all shot on iPod. Tweaked in Snapseed and the triptych created in Moldiv. Might have taken them through Mextures as well, but not sure.
Backstory: After the dolls came home from the thrift store, their heads came off.
Just trying to improve on the situation with replacements, a mushroom, an eggshell, and half a peach. 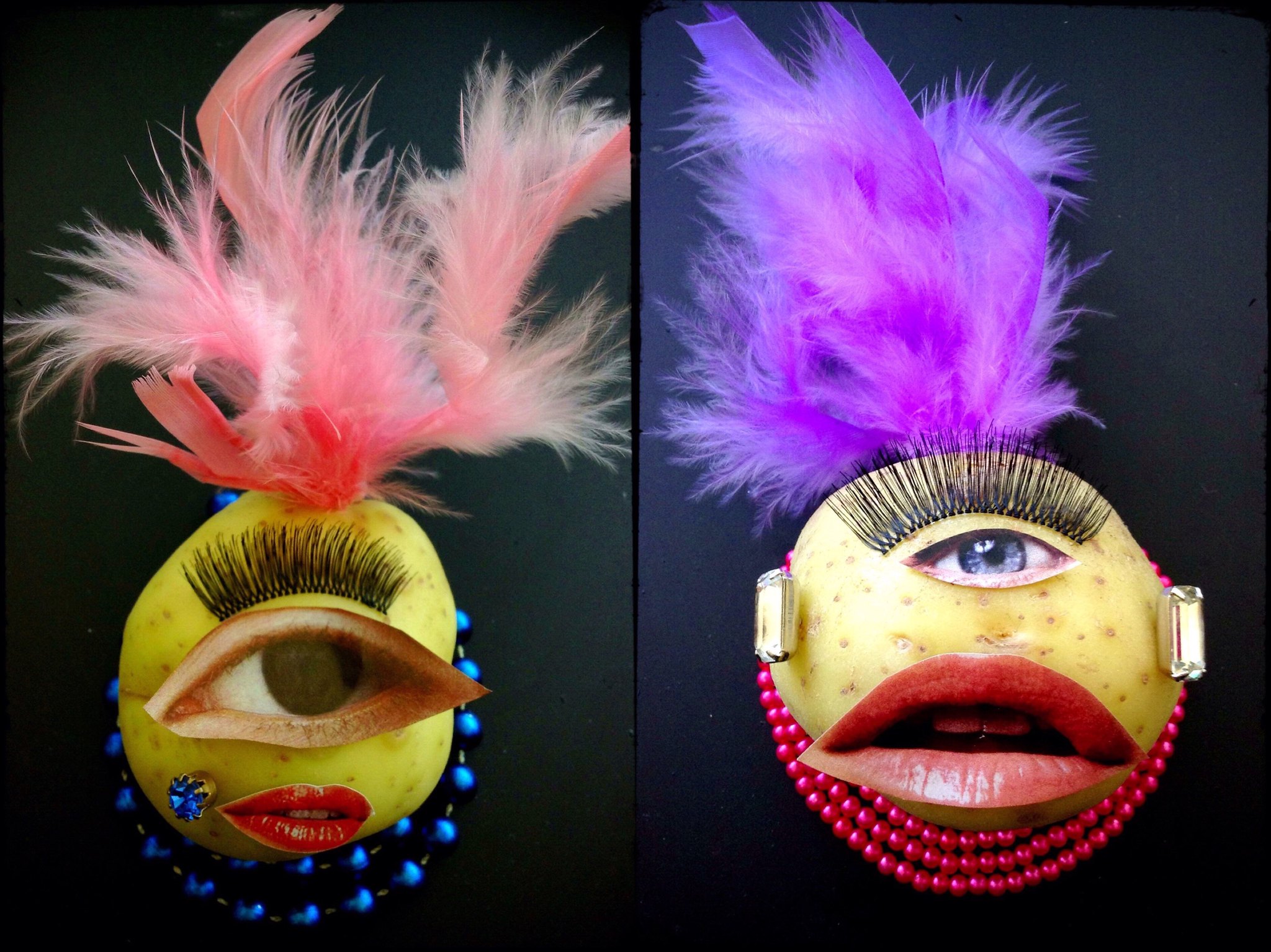 Apps Used: Shot with iPod touch, KitCam(GhostBird). No further edits save using Moldiv for a diptych.

Backstory: After a brief series of Lady Potato Head © I thought it would be nice to have some babies for Father’s Day weekend.