This week’s Apps Uncovered explores images that feature what you can see from the road – not necessarily street photography, but what you see while “on the road” – both at the macro and micro level. The wide variety of imagery posted this week makes for a full-bodied collection of top notch images, across the spectrum of genres. Jack Mallon’s wonderfully colorful collage is the lead image for this week’s selection. 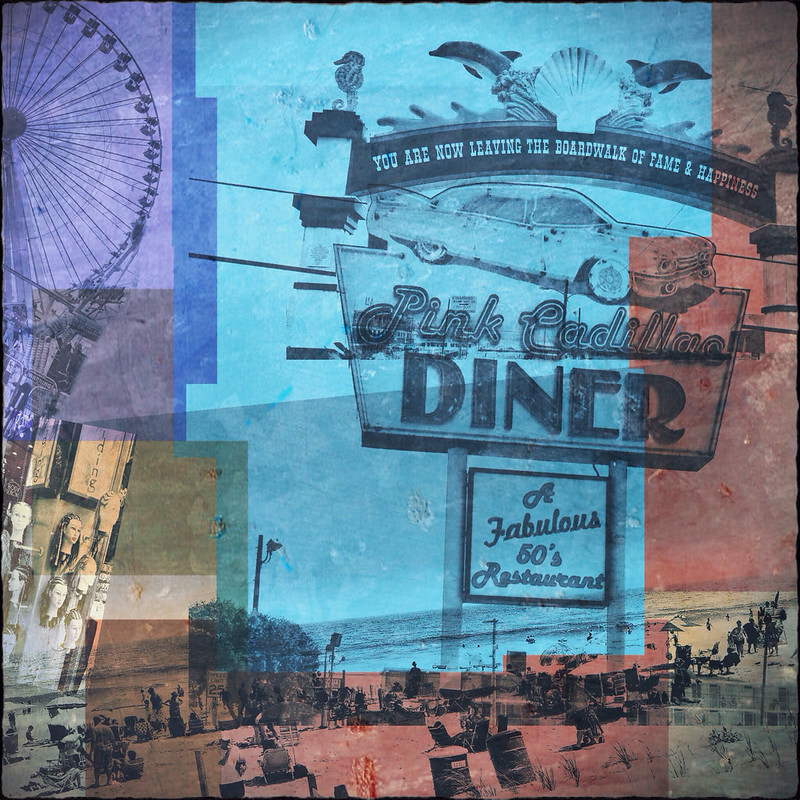 Backstory: As far as this piece goes, I was inspired from a painting I came across flipping through Pinterest art boards. I went through my photos on Carousel ( Dropbox is where I store all of my photos) until I came to a collection from Wildwood when I first started in Iphoneography in 2011. I put them all through Snapseed to clean up, increase contrast, and desaturate. I created the background with a mix of Procreate and IColorama rough paintings of shapes, and layered everything with Superimpose. Last but not least ( I think, I’m going by memory here ) I ran it through random mixes in Pixlromatic until I liked a result. 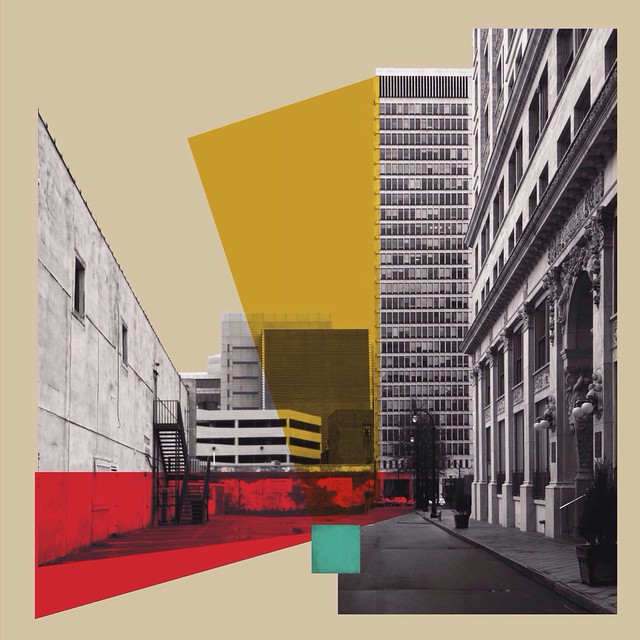 Backstory: When driving to meetings I often entertain myself by taking images of side streets/alleys only. This image represents two streets blended together to make one shot. I create color shapes in iDesign and use Union for masking & blending. 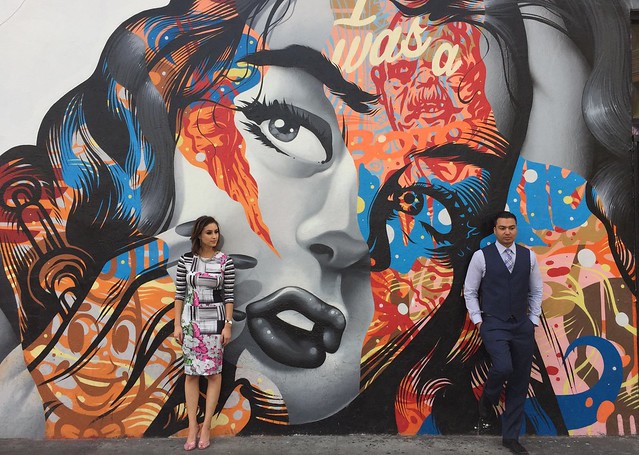 I was a Botox junkie by Connie Gardner Rosenthal

Backstory: This photo was taken on a tour of street art in the LA Arts District. As we approached this wonderfully colorful piece, I saw this man and woman posing for two photographers. I really liked how they complimented and yet added contrast to the whole painting and decided to shoot them as they were standing there.

I shot this with ProCamera and cropped it slightly in Snapseed. 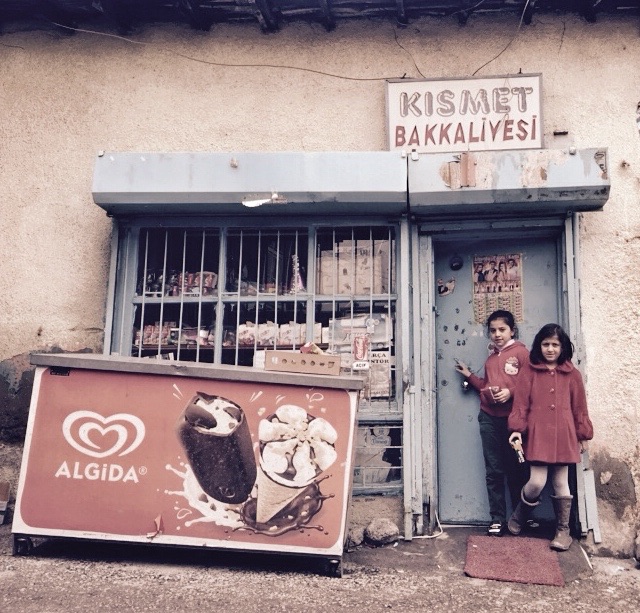 Apps used: Taken with Iphone 6 and edited only with Snapseed.

Backstory: This shot was taken in a very poor neighbourhood in my home town. I often go there for photo walks. The residents are very friendly and they let you shoot their photos. This grocery was very busy on that Saturday afternoon and the customers were mostly children who enjoy the junk food they can afford. The name of the grocery is Fortune!

Backstory: Walking home from the park with my dog we were passing a B&B when I spotted this abandoned shoe. With the cold weather I wondered how someone came to loose it. Did they walk out of it as they ascended the steps to the B&B after a night out?… (we were in the city centre and this was the weekend), or had it dropped from a bag or suitcase when leaving?

The Black and white shoe lay on the black & white pavement, it was impossible to walk on by. As a found object I didn’t want to move it, rather document it, + it already appeared to be posed for the photo.

Hipstamatic is often my camera of choice so I took a few shots with both the Lowy lens & Blanko film and Matty ALN+ D-Type Plate combination. When I got home I decided that I didn’t want to edit this image, (although I have since edited the same image).

Normally I enjoy the editing process and this image would have suited a few tweaks in Snapseed, but, the random nature by which I spotted the shoe persuaded me to leave the image without any adjustments.

Cinderella was the obvious title.

Backstory: As an artist and art teacher I always try to think of how a great master might look at a composition and when I visited the Tate Modern on the banks of the Thames last weekend I couldn’t help but notice that the late afternoon sun “kissing” St Pauls Cathedral was just too good to be true. I thought of Canaletto, the great Venetian master and his images of Venice when the horizon is placed so low in the frame and the sky just resonates with light and color. It was truly a golden hour!

I used Snapseed to crop the image right down so that the sky became the dominant note and the glorious architecture of London took second place! Mextures is an app I love to use as it ages my images and gives them a softener atmospheric effect. I have saved a couple of my own landscape “formulas” which I think is a great feature of this app. My dear friend Vivi Hansen was with me and suggested Photocopier which I used very subtly to create a final textured layer.

Backstory: This photo was taken in my town Troyes, I like a lot the carousel on the square, I arranged a tripod on which I put my iphone, I used the slow shutter application to have this speed with the carousel, I asked my daughter has just laid beside and above all not to move, it was necessary that there is a contrast to the carousel and an immobile person, I then used Snapseed for reducing light and after I opened colorsplash to keep only the light of the carousel and part of the red jacket. 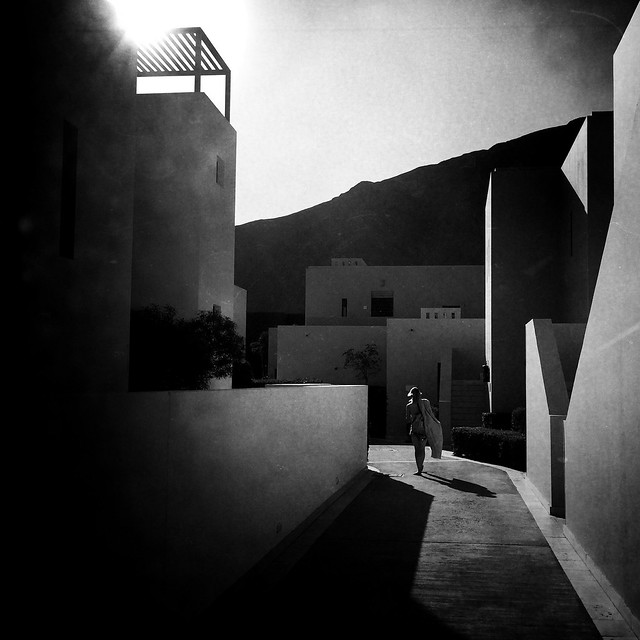 Freedom will find its way by Thierry Hudsyn

Backstory: I shot this picture while on holidays in Egypt, with my iPhone 6+ & Hipstamatic (Lens: John S, Film: AO DLX). The patterns in the buildings, shadows and light appealed to me, and I waited a few moments for somebody to walk through, and then clicked at the right moment ;o)
The title was inspired by the tragic recent events in France, and the fact that the picture also made me think somewhat of a maze.

Backstory: I took this picture on a monday morning on a train station in Berlin. I saw this woman standing in front of the wall next to the bicycle. She was smoking a cigarette. The scene looked very calm to me, because everyone around was busy, running stairs down or up to catch the train to work.

The processing was very simple, i took the picture with ProCamera8 and an iPhone6. I did some miror adjustments,the cropping and the bw conversion in Snapseed. For the final adjustments i’ve used the curves tool in Filterstorm Neue.

Backstory: This was taken with the iPhone 6+ resident camera panorama tool and processed with SnapSeed and the original (and unfortunately no longer available) Photoforge app. After applying Photoforge oil and water color filters, I applied a filter from Distressed FX to achieve the final result.

An ongoing project of mine for several years now is the capturing of our vanishing rural Indiana life. I lead tours and spend a lot of time in rural Indiana photographing barns, silos, covered bridges and all kinds of farms. I shot this about two weeks ago after a light snowfall. I love the romance of these places, and since I grew up in southern Indiana farm country (although my family were not farmers), these old places harbor a lot of fond memories for me. 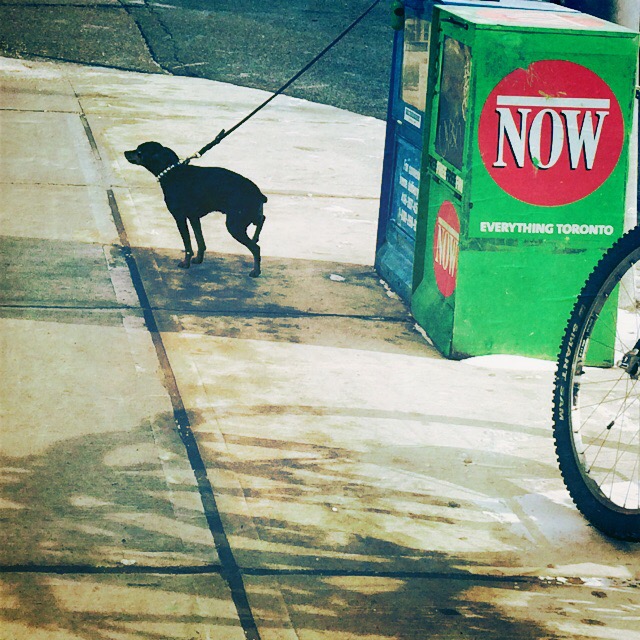 Backstory: Shot and edited with Oggl (lens: Lincoln, film: Blanko 1). This shaky little dog was anxiously waiting for its owner outside a coffee shop. The lens/film combo used brightens the image, brings out the green, and imparts a painted look. 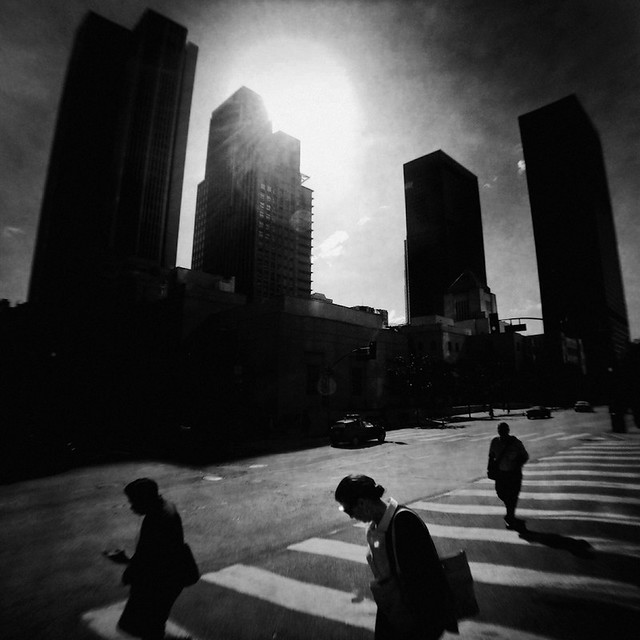 Backstory: This image was shot downtown LA using my iPhone 4S with the Olloclip fisheye lens. I shot with Hipstamatic — John S lens and BlacKeys Super Grain film — and then processed in Snapseed, mainly working the tonality and brightness a bit. I also brought it into Tiffen’s Photo fx app, using the Wide-Angle-Lens effect to actually do the opposite of what it’s intended for, instead straightening out some of the curvature that naturally results from using a fisheye lens.

I frequently wait until I’m done with an image before asking myself “what does this say to me, personally?” For various reasons I’ll avoid analyzing, this image brought a particular verse of scripture to mind from the book of Ecclesiastes: “What has been is what will be, and what has been done is what will be done, and there is nothing new under the sun.”

What can I say — King Solomon wasn’t particularly known for his cheery disposition, and neither am I!

Apps used: Captured with Lenka, and processed with VSCOCam

Backstory: A morning walk, a local park and the cold of winter provided the backdrop for this image.

Caretakers of the park had recently been eliminating dead or dying trees. This was one such tree. I generally try to avoid overt literary references; I want the image to speak for itself. Yet, the visual world, filtered through our perceptions, is often full of subjective
associations.

On one level this downed tree was just a culled, now inanimate object. Yet it was also once a living presence, strong and vital.
Fallen, it had now become a memento mori and a reflection on the passing of time; it was transfigured , in a sense, into something both temporal and yet symbolic. Alive, it stood,for the most part, undistinguished, among many other beautiful,living trees. But now, it made one take notice.

In framing the image, I waited for the solitary walker to enter the composition at the right spot. The lone human figure in landscapes is a traditional but artistic element which , as here, often signifies the diminutive ,but essential ,place of man within his surroundings. The person seen here seemed oblivious of the felled tree; but he or she was a participant in the scene ,nonetheless.

I shot the image in monotone using the app, Lenka, with an iPhone6. The only post processing was done in Vscocam with the B4 preset ,which is a higher contrast black & white treatment.
I am sending this information via a return link within the comments section of the posted image. 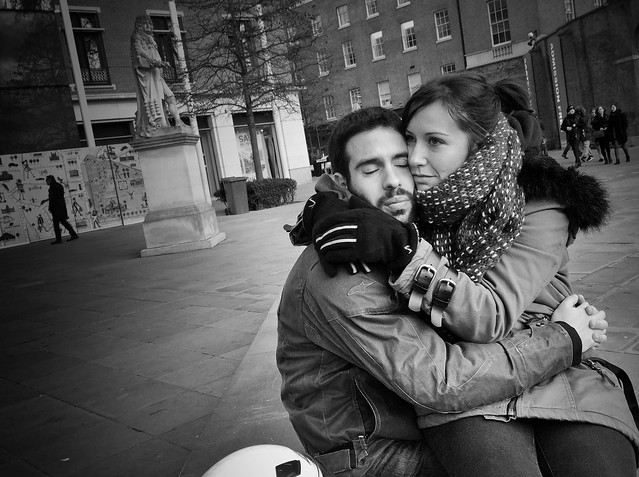 Better together by Rob Pearson-Wright

Apps used: Snapseed to tweak the brightness and white balance and then Noir to add a vignette to the image.

Backstory: On Saturday’s a local square gets taken over by a fine food farmers market and I sometimes go down there to people watch. Slightly away from the main throng, I noticed a couple that were very much into one another and being very affectionate.

I walked over and sat down on the stone bench beside of them being careful not to break their mood. They cuddled, kissed and chatted together. I pretended to make a call and framed them on my screen as I raised the phone to my ear. Using the volume button I took about ten shots.

Later when reviewing the images this shot stood out. A peaceful moment of just being together, happy, loving and close.

No Exit by Carlo Garrone Merlo

Backstory: Puerto de la Cruz, Tenerife, Canarias Islands.Taken during a walk last sunday with my iPhone 5s. I’ve simply viewed the scene, the moment with no people walking. After I used PSexpress to increase sharpen, Snapseed to apply Vintage effect and frame.