Welcome to this week’s Apps Uncovered where we feature a range of iPhoneography talent and reveal the creativity and techniques behind each of the iPhone images featured. We have some strong portraits this week with some fabulous use of available light. The wonderfully inventive and creative Cedric Blanchon scoops the lead image with his beautiful portrait of his daughter, quite a contrast to Cedrics often witty and surreal images. Another stunning portrait; infact, a self-portrait comes from our iPC regular Paula Gardener and Sheldon Serkin returns to Apps Uncovered with his subtley and beautifully lit “Deon”. If you like any of the images in the showcase, please explore further by clicking on any of the artists images to go straight to their Flickr stream. If you’d like a chance to be featured in this weekly showcase, please remember to include your apps and backstories with your photos. Thank you, as always for submitting your amazing work.- Bob Weil will be back next week with a new set of 12 images, stories and apps. For a chance to feature, please join our Flickr group. 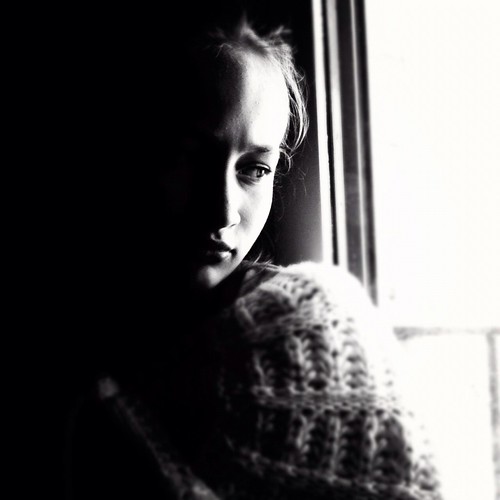 The daughter by Cedric Blanchon

Backstory and Apps used: I captured my daughter with Camera+ and used Noir and Snapseed app to finish the editing darkening certain areas and creating the blur on the shawl on her shoulder and arm. Of course, I really like this pic because it is my daughter and I love the expression on her face. 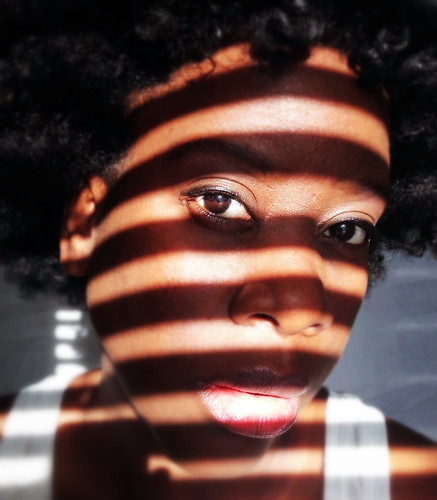 Backstory: Anyone who lives in the UK at the moment knows the weather is absolutely lousy. So on the rare occasions the sun sneaks it’s rays through the clouds, out comes my iPhone. I love using light and shadow to make a portrait more dramatic. It was a bonus having the blinds cast such beautiful shadows into the room. I chose to have the shadows that were created by the blinds fall across my face and I carefully positioned myself so that my eyes would not be in the shade.
Process: Post editing was done in Snapseed and Blender. I enhanced the colours and contrast In Snapseed. Then I created two copies of the image; one focusing on my eyes using the tilt shift editing tool and the other focusing on my lips using the same tool. I then blended both images together in Blender using the masking tool. 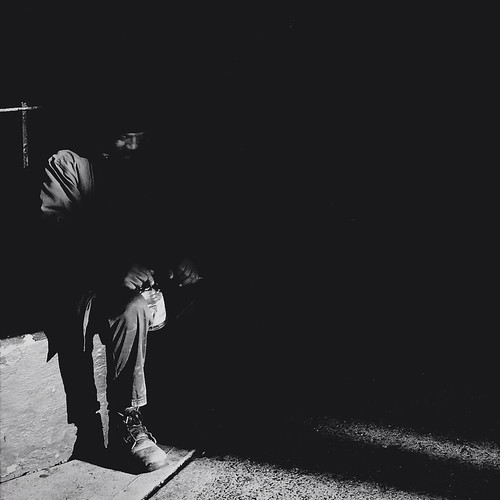 I shot “Deon” with Hipstamatic Oggl using the Madelena lens and BlackKeys XF film and tuned the image a bit in Filterstorm. The sun was casting very strong shadows, and I positioned myself to best catch in the light what I thought were the most important features of my subject, the ones that told the story.

I took this picture of my daughter last summer at the Eastern State Penitentiary (formerly a working prison but now a museum) in Philadelphia.  This prison is enormous and has a very fascinating history and had some famous inmates: Al Capone being one of them!

We had been walking around the museum for a couple of hours on a very hot August day and my daughter’s patience was wearing thin.  I think my incessant picture taking was also starting to add to her annoyance.   I did not realize she was glaring at me until I was back at the hotel looking through my images.  It all seemed to fit so perfectly — a hot summer day, a long walking tour, a teenager getting peeved at her Mom…. just what all summer vacations are made of!!!
( More information on the prison can be found here:  http://www.easternstate.org/learn/research-library/history)

Apps used: I took this picture with camera+ and used the clarity filter and the nostalgia filter(at about 30%). I also did some fine tuning in Snapseed. 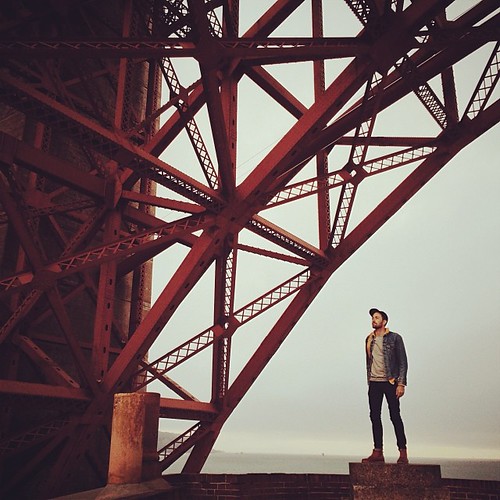 B lil by Dirk Dallas

Backstory: This picture was taken in San Francisco under the Golden Gate bridge at Fort Point. I wanted to get a portrait of my friend with the bridge by showing the massive scale of it but I also didn’t want the typical bridge shot that people have probably seen a 1,000 times. So I positioned him in a way in which I could have the Golden Gate Bridge peak through the frame and be identifiable yet still be a bit mysterious at the same time. That day was pretty overcast so the lighting was nice and even. 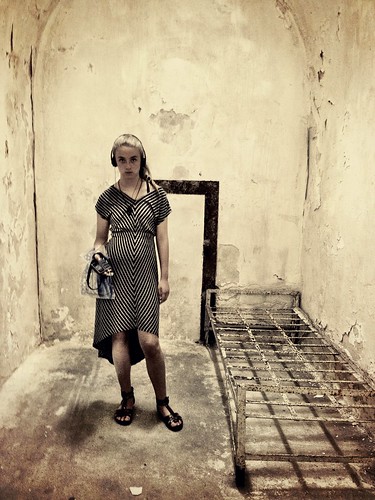 Backstory: I took this picture of my daughter last summer at the Eastern State Penitentiary (formerly a working prison but now a museum) in Philadelphia.  This prison is enormous and has a very fascinating history and had some famous inmates: Al Capone being one of them!

We had been walking around the museum for a couple of hours on a very hot August day and my daughter’s patience was wearing thin.  I think my incessant picture taking was also starting to add to her annoyance.   I did not realize she was glaring at me until I was back at the hotel looking through my images.  It all seemed to fit so perfectly — a hot summer day, a long walking tour, a teenager getting peeved at her Mom…. just what all summer vacations are made of!!!

Apps used: I took this picture with camera+ and used the clarity filter and the nostalgia filter(at about 30%).       I also did some fine tuning in Snapseed.

Milkweed in Autumn by David DeNagel

Backstory: I have always found the almost “explosive” nature of bursting milkweed to be a fine photographic subject. This plant was shot in a vast empty field on a cold,bleak day in November. The wind was giving a temporary “life” and motion to the ephemeral structure of the milkweed pod and its seeds.
I took the photo using ProCamera7 and then processed within the app using their fine set of filters. In this case I used analog, Polaroid 600 film which is always a favorite of mine and done exceptionally well in ProCamera. I then added some texture and toning in Mextures and VSCOCam. I wanted more drama in the sky to heighten the dark,autumnal mood, so I finished the image in Snapseed, adding a vignette and focus effect. 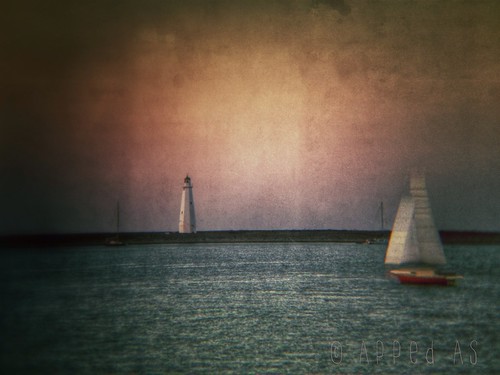 Boulder Bank Lighthouse by Apped As

Backstory: This photo was taken in Nelson Harbour, New Zealand. This was one of the last boats in a yacht race held each Wednesday evening. The wind was slowly dropping and the sun had just about set and this yacht was tacking up the harbour to get home. I had the iPhone on a tripod with my $20 screw on telephoto lens and was using the Slow Shutter app and simply waited till he sailed into the frame. Managed to snap off 3 shots before he sailed out of frame, this one being my fav. The “shutter” time was 0.5 seconds, set on light trail. The evening light here in Nelson is simply something else, has to be seen to be believed its so good.
Apps used: Slow Shutter  Tripod $20 Screw on Telephoto lens Snapseed Camera+ Over 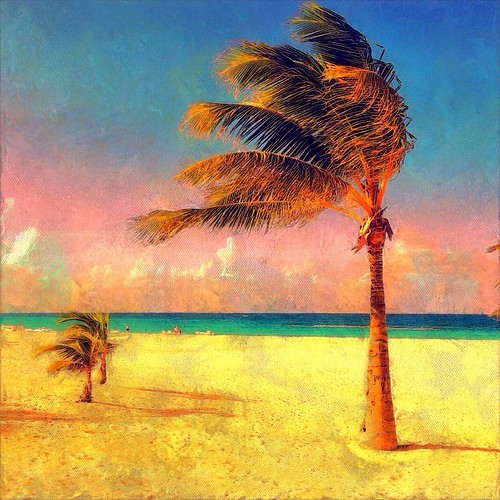 Backstory: I shot this while on vacation in the Dominican Republic in early October. Like much of my work, I was interested in blurring the lines between photography and painting, and so I used a variety of apps to achieve this look, layering effects at varying opacities until I arrived at the desired result. 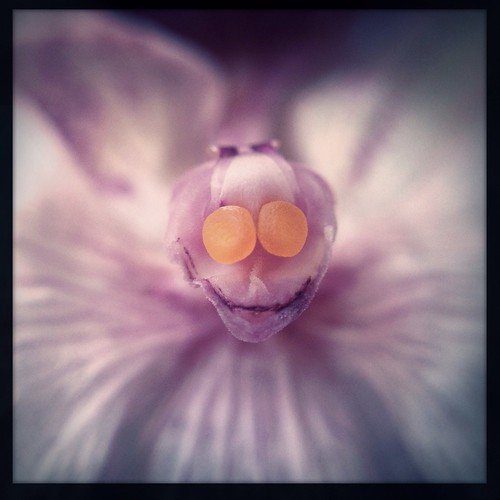 Anatomy of an Orchid 9 by michmutters 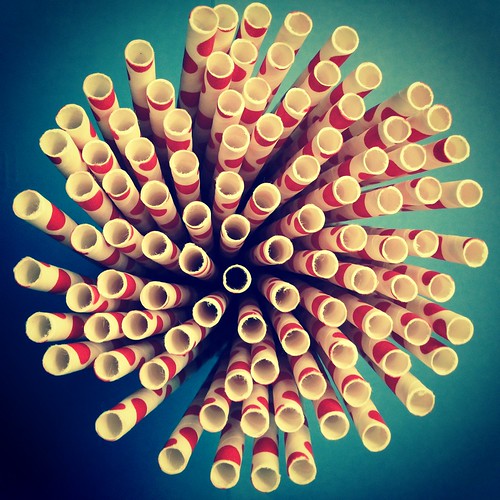 Backstory and apps used: My idea behind the image was to create a colourful flower from straws. I placed red polka dot drinking straws in a narrow glass and arranged it as best in order to resemble a flower,I placed the glass on a blue background on my kitchen counter top under soft light. I then took several photos from above until I was happy with the composition. The photo app that I used was the default camera app, using the square crop format because I wanted to use Instagram to enhance the image, finally I used Instagram to enhance the image slightly in order to bring out the colours. I took the photo with an iPhone 4s. 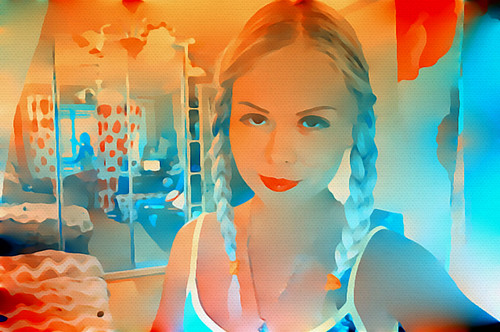 Backstory: (by Teresita, the developer behind iColorama) This is a “selfie” of my daughter in law, that she allowed me change as I liked.
We at the iColorama Facebook group have been sharing different receipes, and this one uses new presets in iColorama: Simplify 3 and then different color enhancers and texture. The only app used is iColorama, and while I’m more a developer than an artist I try to inspire the users of the app with whatever new I add) 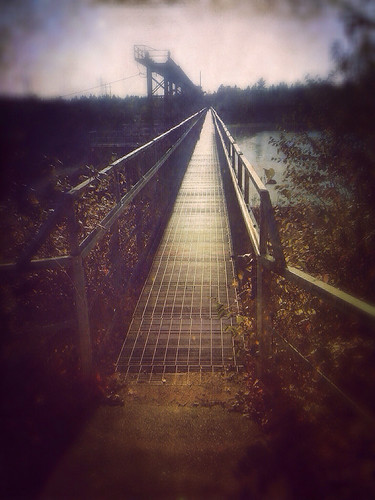 I edited this photo as I often do by beginning with making 5 or 6 different versions of the image with Snapseed’s Retrolux effect, Lo-Mob and Modern Grunge (mainly for light and tones). Then I try all sorts of combinations with these versions in Superimpose (especially with Normal mode, sometimes with Multiply) until I get a picture that is clear and more defined. Then I work the textures using the apps Mextures and DistressedFX, finally refining the light with VSCOcam.

Most of the time, I’ll stop there, but I felt there was something missing in this picture: I liked the composition with the strong lines, I liked the light (which suggested the fall, but a somewhat strange fall), I liked the texture, but it was as if the composition with very straight lines produced a somewhat mechanical effect. I then tried to add blur with PhotoToaster and it seemed to me that the combination of clean lines and vaporous blur gave a most interesting result and contributed to the effect of strangeness that I tried to get with the light.
And this small bridge over a dam then became a path that was lost in a somewhat unusual light, transforming into a more unsettled path that we are not sure if we should travel along or not.