Thanks to Robert Laliberte for our feature image this week “Pencils.”  His solid, stack of colour pencils standing shoulder to shoulder to create a powerful geometric pattern of happy and strong colour soldiers ready for creative action!

Rounding out the rest of the group this week are the following artists:
Susan Blase, Salwa Afef, lila_lile, Erik Viggh, Rubén Rodrigo, Tomaso Belloni, Laila Bakker and aka TMan.

Click below to see if you are one of our lucky iColorama for iPad and iPhone winners... 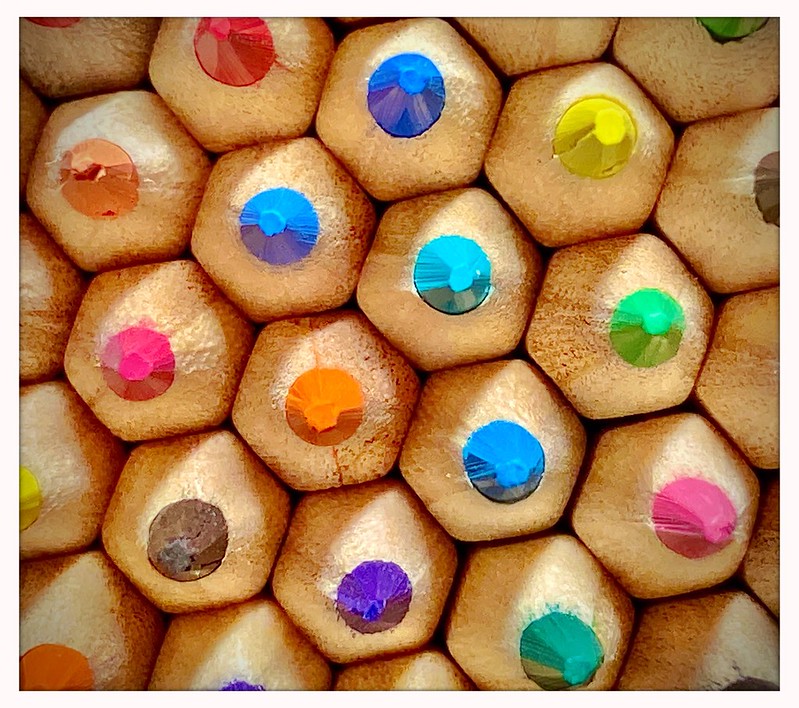 Apps used: Hipstamatic (Blanko film and Standard flash).
Backstory: This photo was taken while shopping at the local mall. The pencils were packaged in small containers, and I had my companion hold up a container turned on it’s side while I snapped the shutter button. 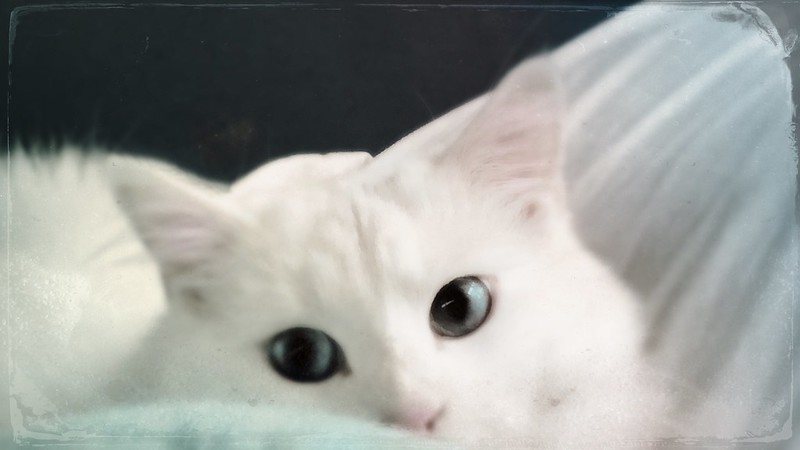 Apps used: Tintype and Facetune.
Backstory: This photo has since taken on a new significance for me. It originally was just a quick snap to send to my sweetheart of our cat one morning. Thing is, he is in lockdown in Italy right now. So the photo, in the short window since I posted it, helps me realize just how fast this situation has escalated. I only ran it through TinType and quickly adjusted some details in Facetune. I look at this now and at the time I was trying to brighten his day as Italy was just starting to adjust to isolation and rules we now all are enduring. Deep inside I had a feeling here in America I was seeing our future lifestyle…and so far I am right. I am for now trying to use this time to stay with my cats and hunker down and not utterly go haywire. I hope that a positive result that can become of the crisis is we are all in this, and I have seen a strong sense of community forming through a different…maybe even more grounded or basic set of motivations. So please everyone stay safe and stay home if you can. For those who must work and provide services, thank you. I myself am trying to reset and create, support my family and friends…and clean lol. It has made me appreciate even more moments I can share albeit in a virtual way to be close to my love. I worry so much of his home county, but they will make it. We will all make it through. 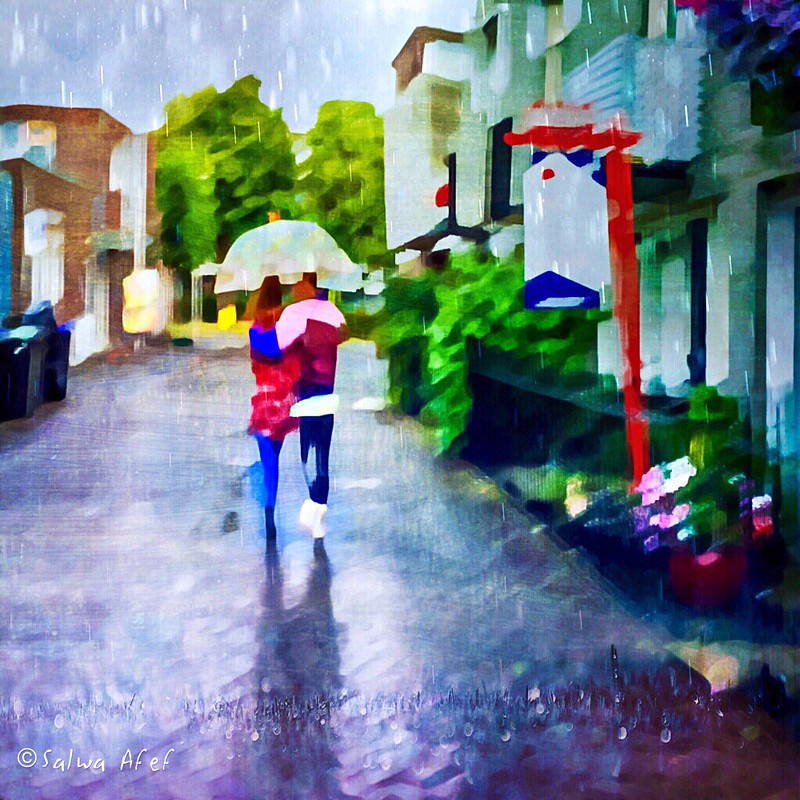 Apps used: Slow shutter cam + iColorama + iWatermmark.
Backstory: I was walking to the supermarket and saw the couple, loved to capture the body language of them.

I took this photo using the “slow shutter cam ” ” light trail “which gives me the basic painterly effect. Then I worked on iColorama for more painterly effects, also added a rain layer and texture! 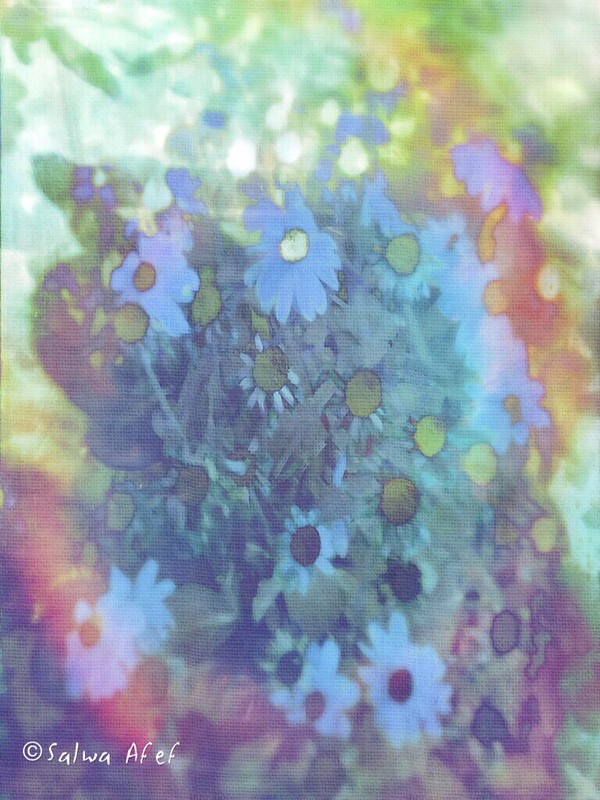 Apps used: Slow shutter cam + iColorama + iWatermmark.
Backstory: sometimes I don’t know what is hidden within the photo until I make it, saying to myself just take the photo and I will see later what to do ?!
I love to play with shadows at any time and shadow can be crazy behind the glass! I had a quick thought I want to make a photo of a colorful shadow, how?!

I’ve made this photo from 2 different photos; a shadow of big pot behind the door glass ( sharp normal photo ) and another photo of flowers ( slow shutter painterly effect) took them both in last summer!

Under the influence of summer light/ shadow, I’ve tried to blend many photos until I blended those 2 photos together, played with the 2 layers and the modes.
Suddenly I got this result between the shadow effect of the pot and that painterly effect of the flowers, the final touch was the (dream canvas) effect in the Hipstamatic app! 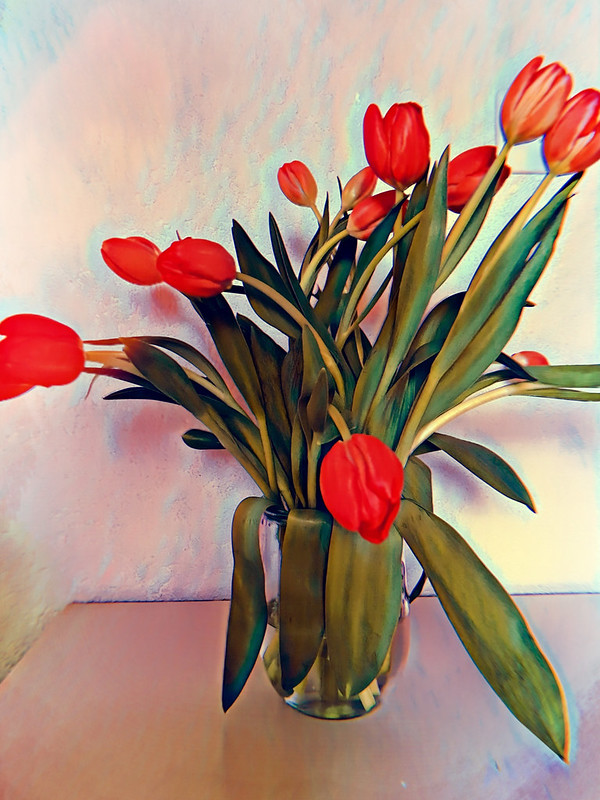 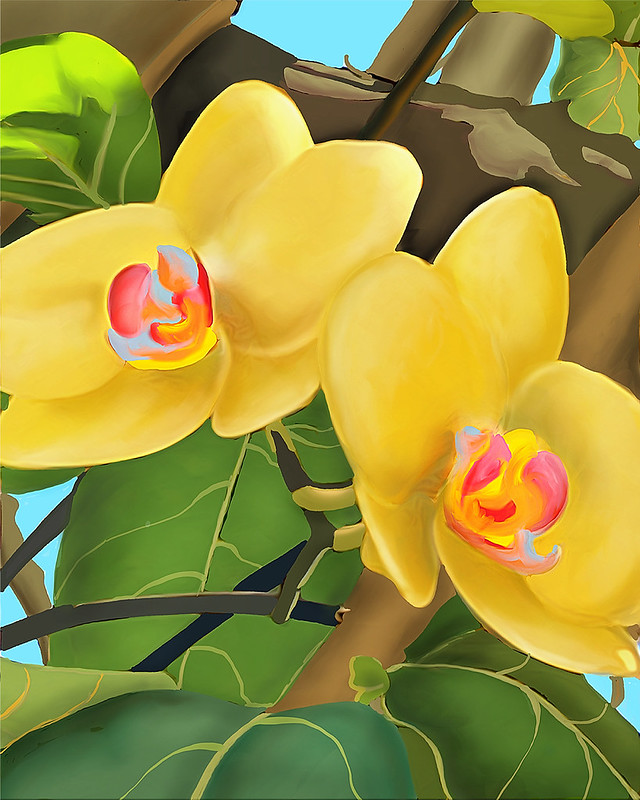 Apps used: iColorama, Procreate and LightBrush.
Backstory: On a recent vacation in Florida I noticed an abundance of orchids growing in their natural state, as air plants precariously seated on bare tree branches. It was not uncommon to see clusters of them in varied colors and textures on the same tree. I was fascinated and took many photos. The delicate tendrils of blooms, all in a row. The succulent centers that seem to come alive and speak, like alien creatures. The unusual colors, every bloom with a perfect color palette. While at a Florida restaurant I noticed a digital art poster of oranges growing in a tree. The style was incredibly simplified, stripped down to a few colors and shapes without texture. But the forms were treated as 3 dimensional objects with shading and highlights. I decided to create a similar edit using one of my orchid photos.

In IColorama app I simplified the photo removing all texture and color variations. Then in Procreate app I imported the edit, reducing the opacity and in subsequent layers painted in the colors which I chose based on the original colors. This simplified the image even more. I painted in vein lines, changed some leaf colors and added shading. In LightBrush app I further highlighted and shaded certain parts. I realized after I completed the image that it resembled Asian artworks of blossoms and I was very happy with that. 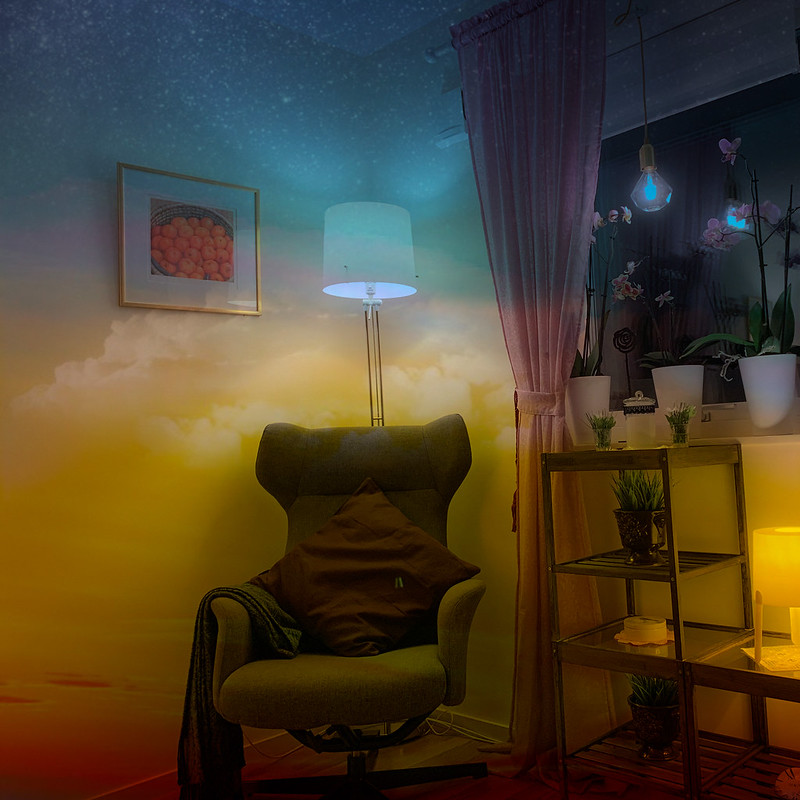 Apps used: I used the native iPhone camera and edited the picture with Photoshop Express using some of the effects offered.
Backstory: A totally unexpected result. The scene was a corner of my living room with the light from the lamp giving an interesting play of shadows that caught my eye. After updating the Photoshop Express app I experimented with different effects and liked the combination of the sunset with the stars in the evening sky. 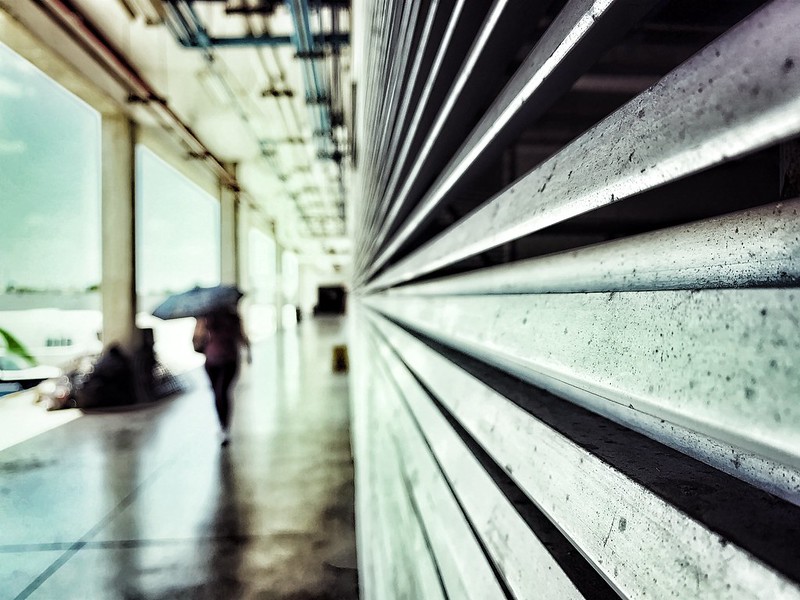 Welcome to the machine by Mister Blur (Rubén Rodrigo)
1) which apps you used: I used Snapseed, as usual. it is a very versatile app for the iPhone and even for editing photos of your DSLR in your iPad.
2) and if possible, also provide a bit of the backstory on how you happened to find / compose the scene: I was walking in this aisle outside the Hospital where I work, when I saw this metal wall and I thought about the potential for a good photo. I set the manual focus on the foreground with the intention to enhance the metal texture, and just waited patiently for someone to walk down the aisle, and then, someone with an umbrella, it looked blurred and with a nice contrast against the white background. 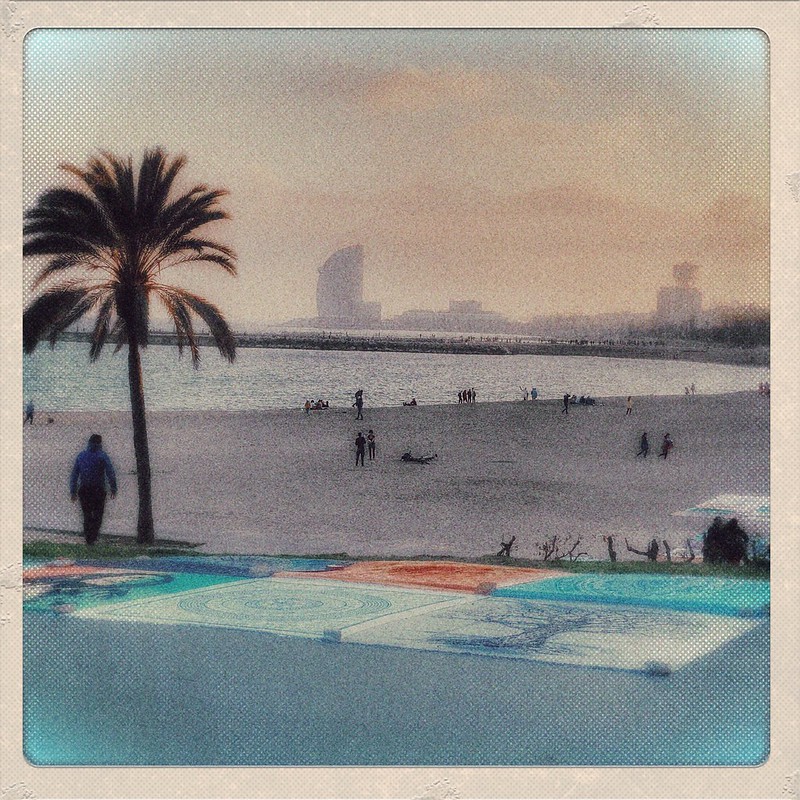 The sky I by tmbx (Tomaso Belloni)

Apps used: I shot with the default camera app on an iphone 11 pro max and edited in snapseed.
Backstory: The first of a series of photos aimed upwards. A shop in Barcelona with strange lights hanging from the ceiling both inside and outside, and a reflection. Gold raining from the sky 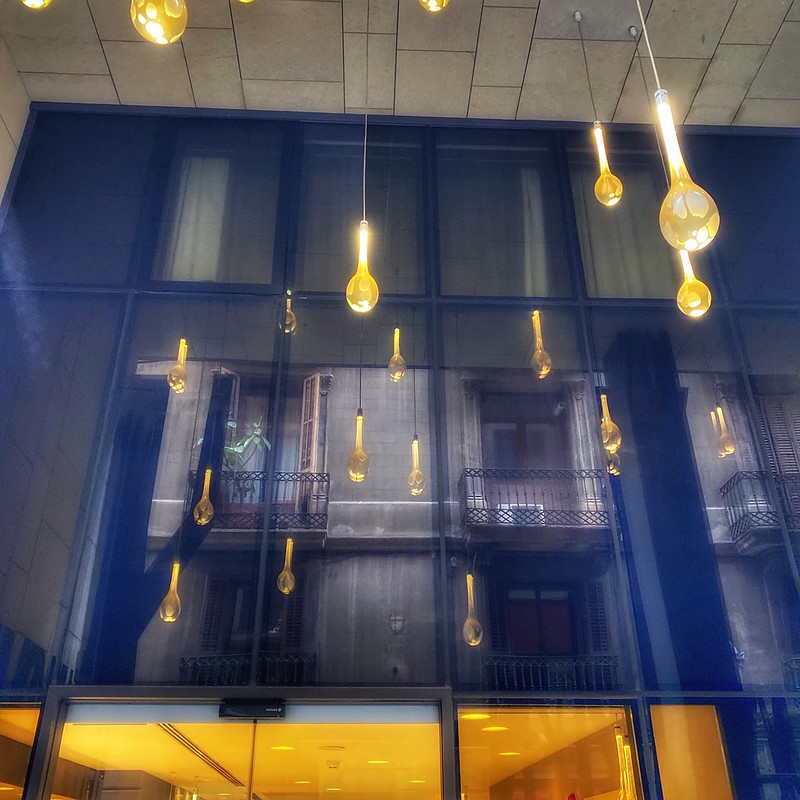 Pushing on by tmbx (Tomaso Belloni)

Apps used: I shot with the default camera app on an iphone 11 pro max and edited in snapseed.
Backstory: The first of a series of photos aimed upwards. A shop in Barcelona with strange lights hanging from the ceiling both inside and outside, and a reflection. Gold raining from the sky 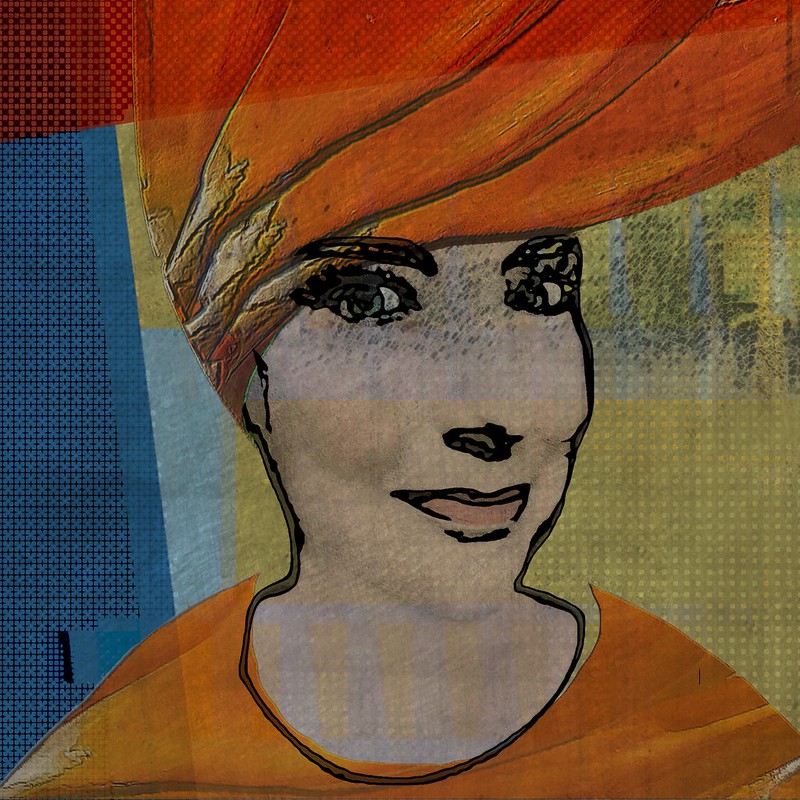 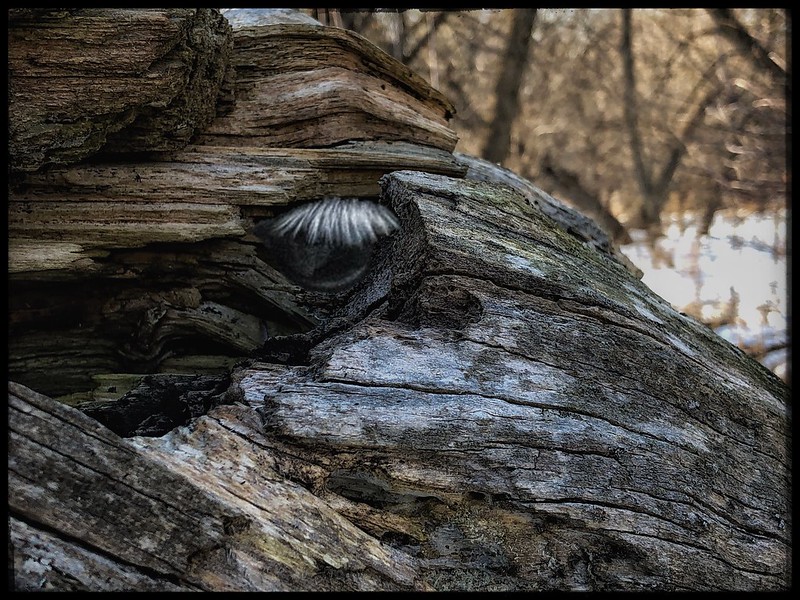 Apps used and Backstory: A recent walk by the local river and off the beaten track was a feast of Nature’s Art on show.Trees standing or fallen are an inspiration to my imagination. Coming across a broken tree trunk revealed the “ beast” I snapped with iPhone 8 in hand. Apps used: Some time later I decided to not leave it as seen in the raw, but to put an eye in the socket.With Unsplash app I was able to do so. I chose a horse after deciding a dragon just didn’t cut it. Messed around with five eyes before settling on Jullien Mussards horse pic from which I “extracted” the final eye. Extraction, placement (1 layer) and sizing using Juxtaposer, final touches: details, sharpening, glamour glow and border via Snapseed app then giddy up to the Flickr stables.