Another fine showcase, thanks to you, our iPhoneographyCentral Flickr members who submit your incredible mobile images every week to our Flickr group.

Our lead image spot goes to Bendetta Falugi’s stunning capture taken during a visit to Saint Nicholas Church in Tuscany. Marvel at the way the light falls in the picture and the absolute stillness Bendetta has captured here. Although,we cannot see the rest of the building, we can feel it’s “echoey” enormity in the huge amount of black space that surrounds the small figures – yes -figures – look closely.

Apps used: Instagram
Backstory: In September 2014 I went in Marche at work for shooting a wedding, this is a region very beautiful quite distant from Tuscany, where I live. So I decided to stay 2 days, one for the wedding and the second one to come back at home with calm. But the shoot is not taken at the wedding how you may suppose.

The second day, in the morning, me and my friend decided to take a trip in the city of Tolentino before come home. It is a very nice city rich with history a remarkable artistic heritage. We visited Saint Nicholas Church where the ritual was just finished and I saw the father in green talking with a child that was carrying an air balloon that was green too. The child was sitting in the wooden bench and only the balloon was visible so i decide to take a photo immediately, the light was beautiful and the the moment perfect, I was lucky enough to find this scene in front of my eyes. 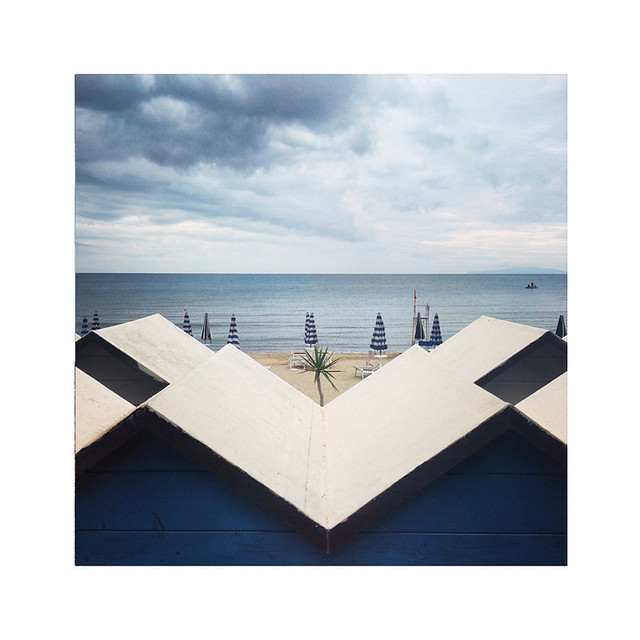 Apps used: Instagram
Backstory: This place is close to the antique shop of my mom so I used to walk very often in this part of the seafront and I see these cabins from the road very often too. I have always been attracted by their geometry and I made several photos here in different hours and days of the year. I think this is the best shot I took. It was a late summer day, the weather was not nice but very atmospheric. The palm was what most attracted my eye and all that blue too, so I did my click and this is the result. 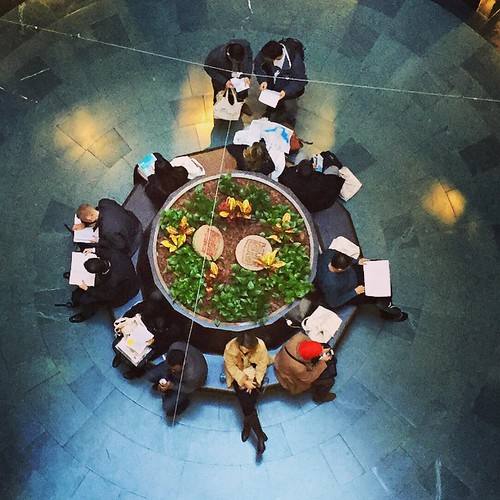 Apps used: Taken with the iPhone 6 and edited in Instagram adding some vignetting and color saturation before posting to Flicker and Twitter.
Backstory: This photo is taken from the railing overlooking a rotunda at the Hynes Convention Center in Boston. I’ve noticed the round bench with decorative plants before, but it really caught my eye when it was full of people, causing a somewhat surreal scene where the people look almost like the petals of a flower from this overhead perspective.

I’m drawn to the surreal and visually poetic in everyday life. We usually don’t pay much notice, but with an iPhone handy, these passing images can be frozen and studied as the little moments of surreal beauty that they are. 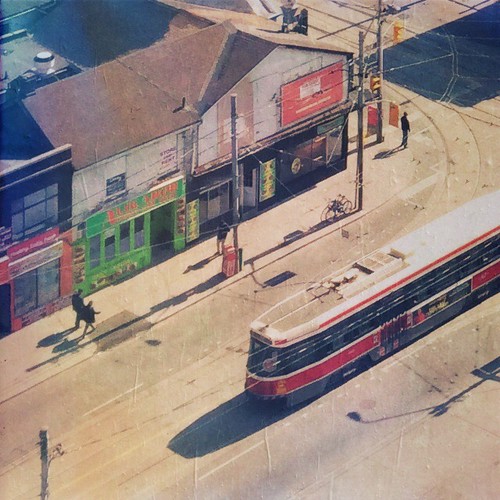 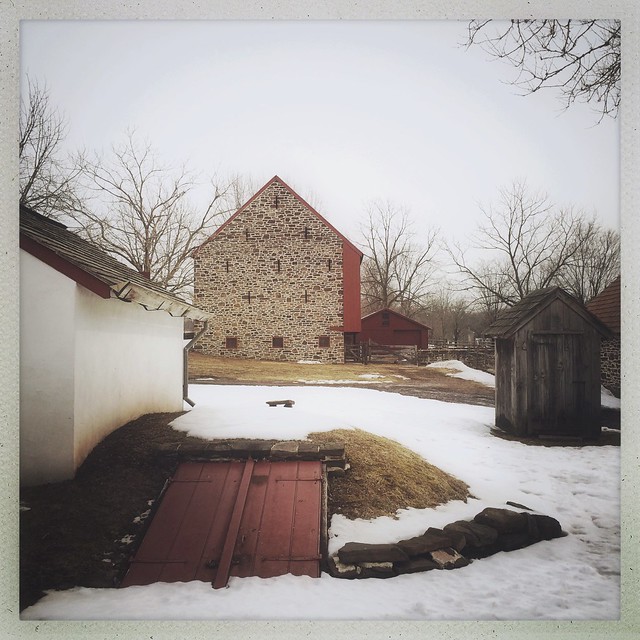 Apps used: I used the Hipstamatic app (Jane lens, Ina’s1982 film) to capture the image and the Snapseed Retrolux filter with some contrast and desaturation tweaks for all of the editing in this photo.
Backstory: This photo was taken at the Peter Wentz farmstead and I wanted to catch the snowfall before it completely melted away. I have been to this farmstead before but I continually revisit the same places looking for different vistas and perspectives and was lucky to spot this particular configuration. 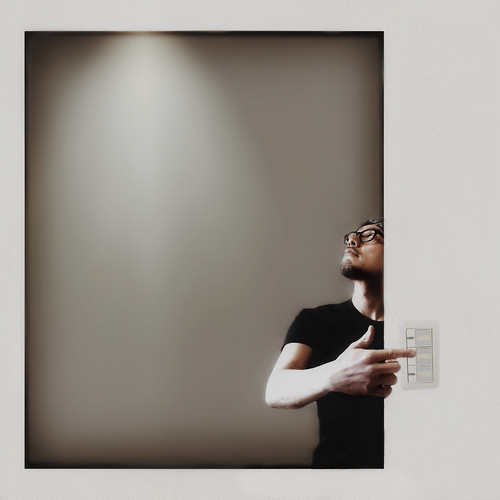 Apps used: iPhone5s with apps Artstudio, LensLight and VSCOcamwith m5 preset
Backstory: I was editing a photograph one day and, came up with the idea of people who live in a photograph.
This is the first image, It is myself pushing the switch of the idea in a photograph.
I blurred the background to give the impression of depth using the Artstudio app. 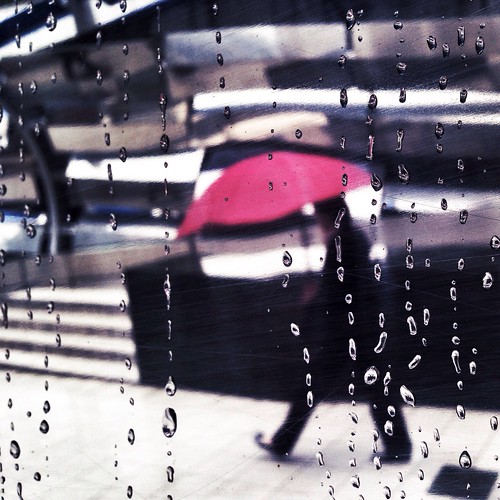 Live on pay-per-view by Michael Kistler

Apps used: Snapseed and Instagram
Backstory: This image was shot last Spring in Tokyo when I was still living there. I took several shots through a mirrored surface where I was focusing on the raindrops and got lucky to have someone with a pink umbrella walk by at just the right moment. The result is an out-of-focus subject with the bright umbrella giving the image almost a selective-color feel. I did some definition, contrast and saturation adjustments in Snapseed before cropping in Instagram. 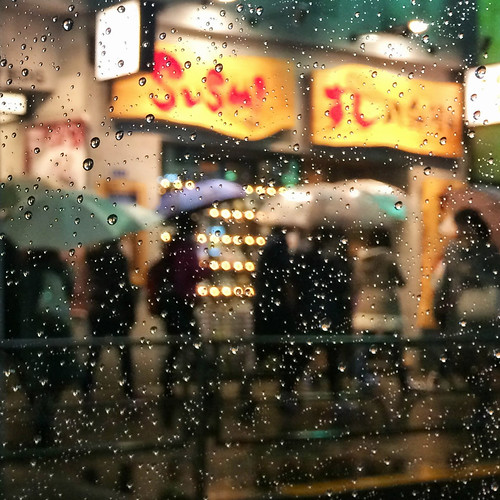 Apps used: Snapseed
Backstory: I shot the image on a recent trip to Tokyo where it rained the majority of the time. There is something about rainy Tokyo nights that really create strong mood, especially with the combination of movement, umbrellas and neon lights. I focused on the water droplets and shot this from inside a taxi, trying to give it a slightly abstract and dreamlike feel. I later edited (saturation and contrast adjustments) and cropped the image in Snapseed. 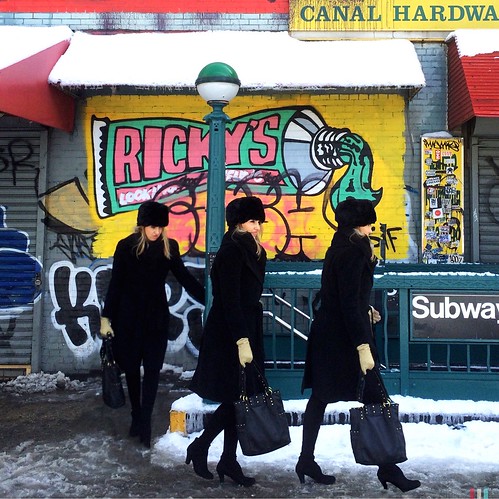 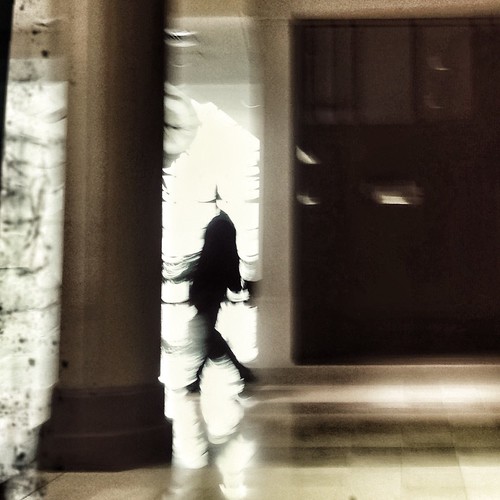 Rush Along by Jack Mallon

The Waitress by Armineh Hovanesian

Apps used: This shot was taken on a Saturday night, on my iPhone5s, using the COVR lens and app.The editing was done in Snapseed using the Tune Image option and then the Grunge finish.
Backstory:The Waitress: My husband and I were trying a new restaurant in Atwater Village neighborhood of Los Angeles. While we were waiting for our dinner, I was taking photos of my surroundings. I was able to catch this moment when the waitress was passing by. 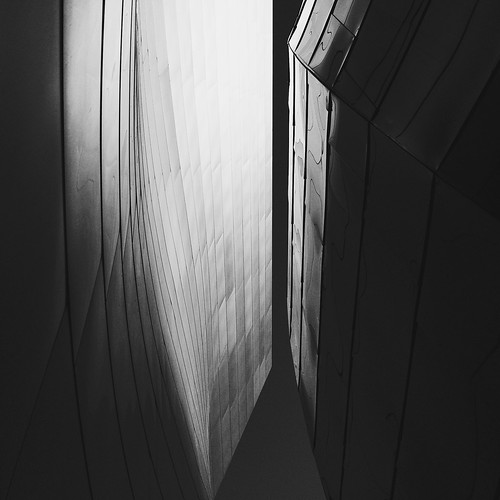 Will wonder ever cease by Armineh Hovanesian

Apps used: This shot was taken on a Saturday afternoon on my iPhone5s, using Oggl (Florence Lens + BlacKeys XF Film).
Backstory:Will wonder ever cease: I am obsessed with the Walt Disney Hall building, a Gehry, in Los Angeles. When in the area, I always do my usual walk around the building and take photos.

If I ever had a twins, I’d use one for parts by Natali Prosvetova

Apps used: ProCamera for shooting. PostProcess – CameraBag, Afterlight.
Backstory: A bit of the backstory: a while back I’ve started to create something like the short photo stories, composed of several images, which all are combined by common story behind it. So, this image “If I ever had a twins, I’d use one for parts” is belong to the series, titled “Apart”. I’ve used some symbolism in it. For example I used the Anonymous mask in it, which brings across specific thoughts and ideas that another mask wouldn’t. Another example of symbolism is the mirror.

Apps used: I took a photo using the iPhone 6+ camera and processed the image using Procreate, AutoPainter, Snapseed, Brushstrokes and Stackables.
Backstory: A lovely gift my eldest son gave me for Mothers Day last Sunday. I wanted to keep the memory of them alive so I created this image with the apps mentioned above. 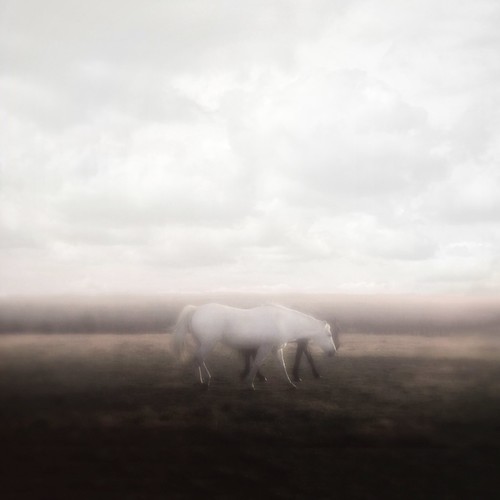 Apps used: Apps used were Snapseed, Handy Photo and Image Blender.
Backstory: This is in Greenwood County, Kansas. Even though it’s a simple composition, there was something compelling about the way the black horse was mirroring the white one. Almost like a shadow. Even though the scene is peaceful, I was stopped a little ways down the road by a man wanting to know what I was up to.