Selected by Nicki Fitz-Gerald
January 2017
Welcome to the this week’s Apps Uncovered.

This week I have had a hard time choosing the images. This new year has produced a flurry of creative activity – thank you for sharing in our iPC group! I have been working on my computer far too long today so without further ado, I am going to jump straight in and introduce you to this week’s wonderful images in Apps Uncovered with some great work by the following artists: Tania Konnerth, Sarah Kuhn, Cathrine Halsør, Remi, Mariko Klug, Siegfried Ferlin, dinalfs, David DeNagel, Alla Crashenkova,Tomaso Belloni, Suzanne Beard, Louise Whiting and Jun Yamaguchi.

Thank you all for submitting your wonderful work to the iPhoneographyCentral. You all make this group so wonderful and rich and it’s getting better and better every year! 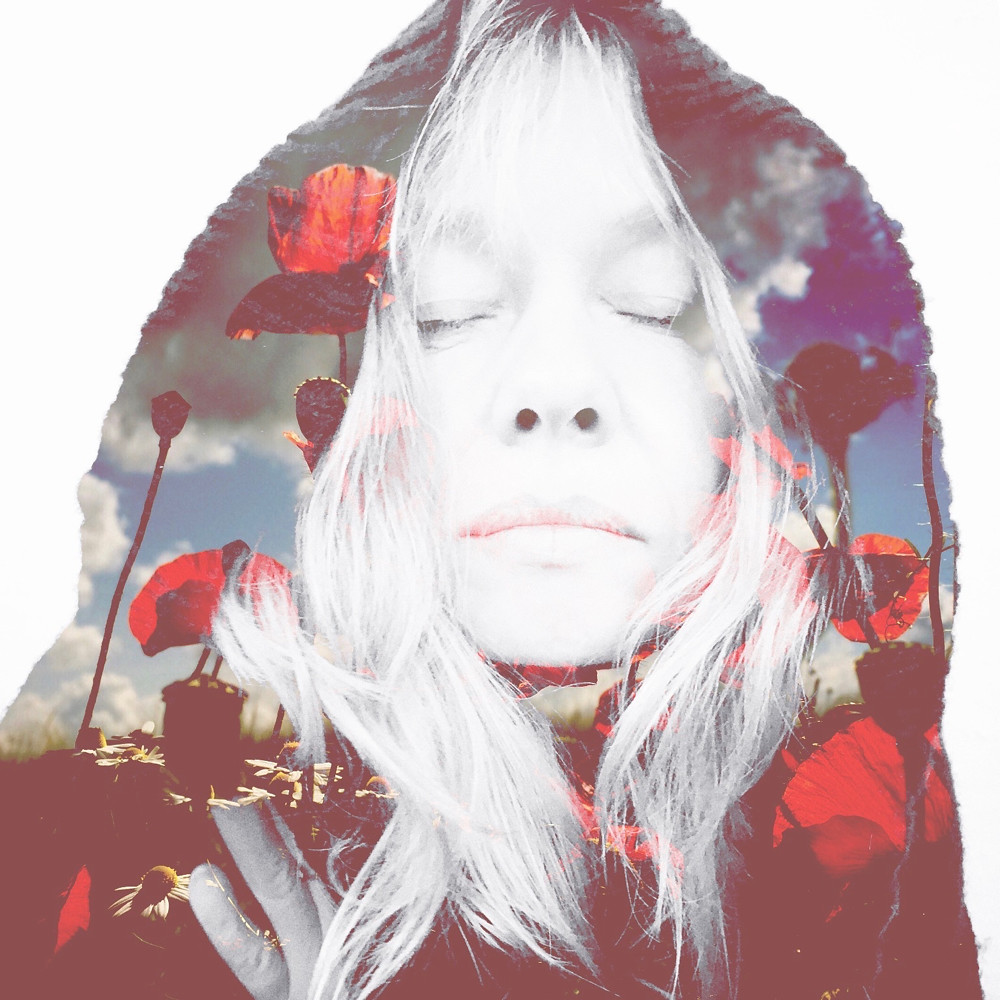 Apps used: iPhone 7, Hipstamatic, Diana, Snapseed  Backstory: The originally self-portrait I used for this composition I took in one of my self-portrait-sessions which can be pretty intense. When I saw this picture, I immediately had the idea to combine it with my all time favorite flower: the poppy because this photo expresses how poppies do feel for me. I use the App Diana to combine the two photos and it worked out exactly as I wanted it to do. 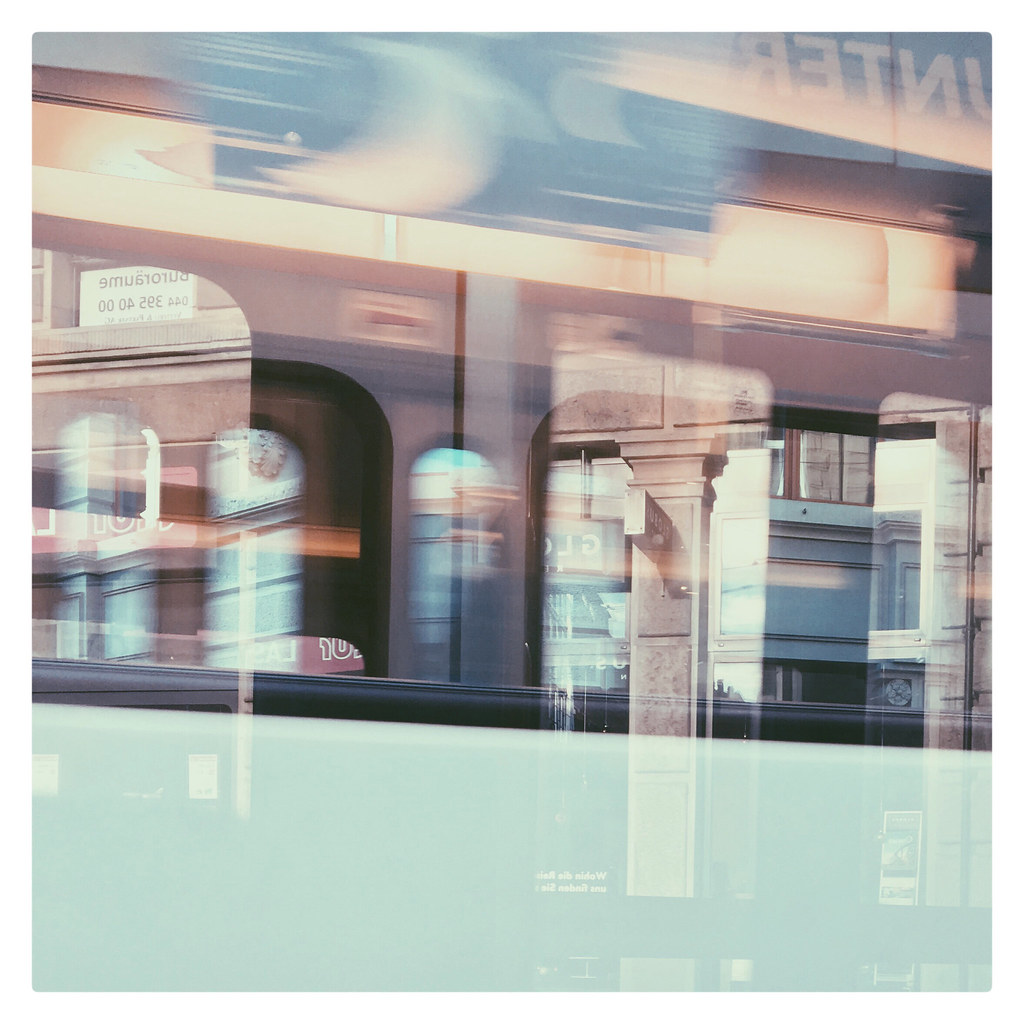 Apps used: Snapseed, VSCO
Backstory: I took this photo on the first working day after Christmas. The city was crowded with people and I felt like the only person not in a hurry but enjoying the day. The picture shows reflections on the streetcar. It is slightly edited by cropping and adding a border in Snapseed and softening the colors in VSCO. 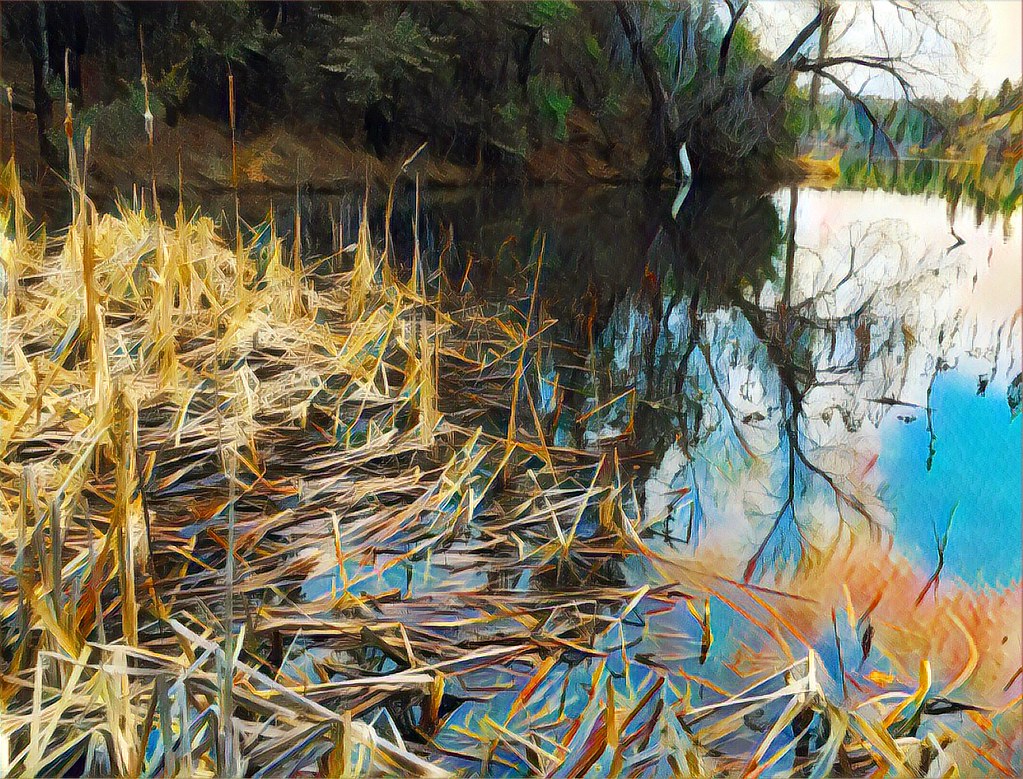 Apps used: iPhoneography on iPhone 6s plus using Prisma and Instagram apps.
Background story: On the morning this picture was taken, I stopped at the Tractor Store to pick up some calendars for 2017. I was delighted to see selfie sticks in the clearance bin. I hadn’t used one in ages. I bought a half dozen. That afternoon I decided to take IPhone, a selfie stick and Zoe–our shorthair border collie–for a walk at Lynx Lake near Prescott, Arizona. The most unique thing about conditions that day was that there were no shadows due to heavy overcast. I mounted my IPhone 6s Plus on the selfie stack and walked down toward the lake, Zoe tugging on the leash to sniff and me snapping away. Once at the shore line, I put the camera in selfie mode and lowered the selfie stick dangerously close to the water level. I pointed the camera in the opposite direction of the usual selfie shot. That way the camera captured a frog’s eye view of the cattails and beyond. I probably took 30 pictures that afternoon. Within a day or two, I processed this one and others on my iPhone. I loaded this image into the Prisma app and selected the “Dallas” Filter. Then I loaded it into Instagram and adjusted it for warmth, saturation, and structure. If you want to see more results from that day’s shoot, scroll to the left and right of this image on Fllickr. 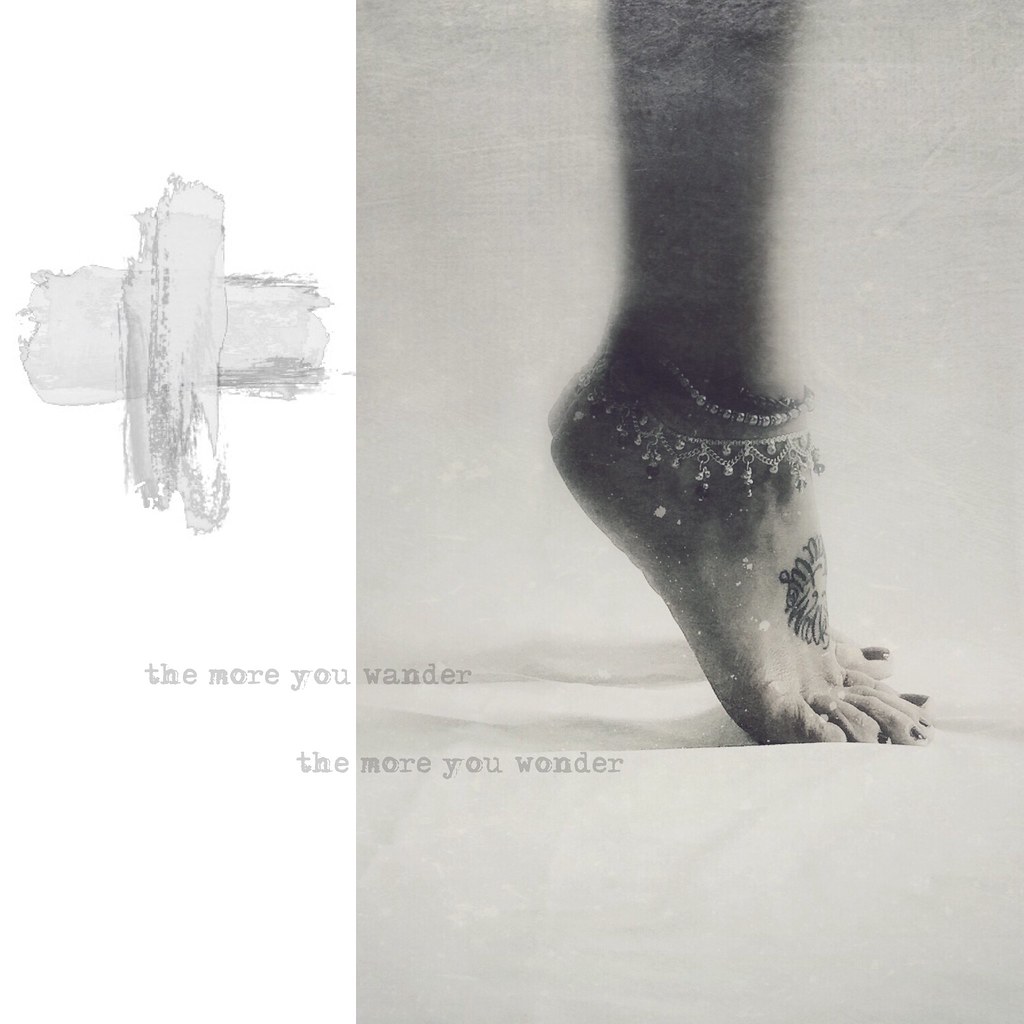 Apps used: iColorama, Formulas, Snapseed, Phonto, Diptic Backstory: It is a visual diary. A playful time with edited images put together with words. It is an intuitiv way of making up stories. Sometimes I use older images created into a new story. The X is created in iColorama. The image of my feet is an older one I took a while ago, created in Snapseed and Formulas. The images are put together in Diptic and the words are written in Phonto. 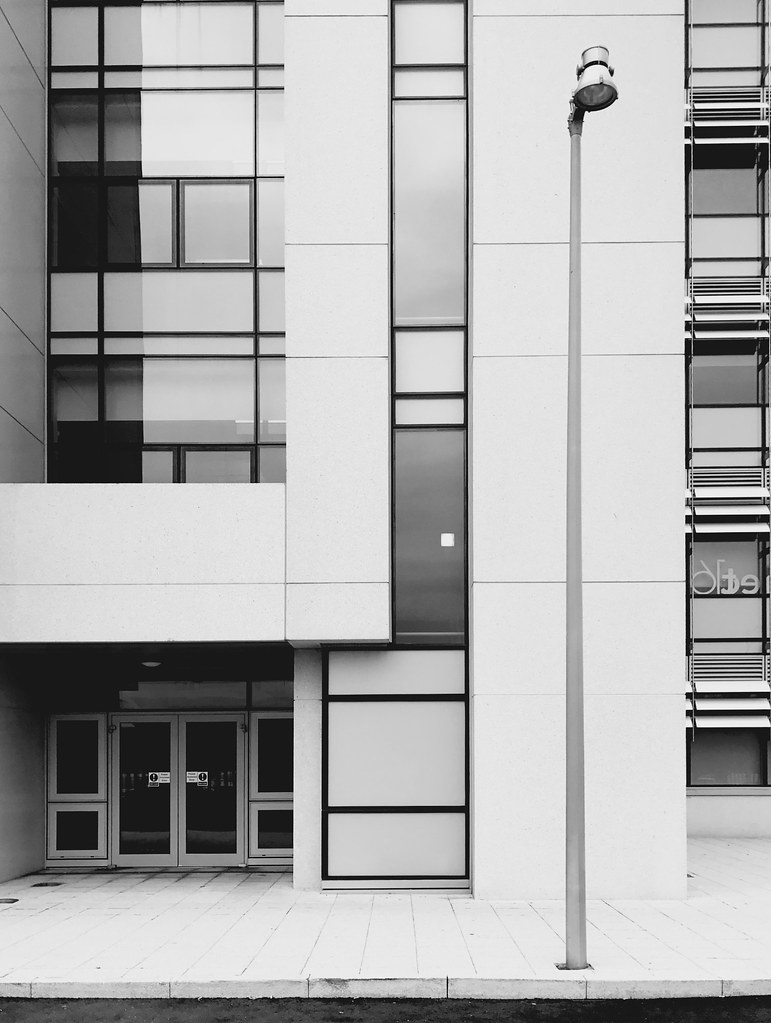 Apps used: Shot with Apple native camera and perspective corrected with SKRWT. Backstory: It’s was taken at the building site attracted the clean straight lines. Post processing were done on SKRWT and native camera app. The SKRWT is the best to work on lines. More photos on Instagram @all_about_abstrack 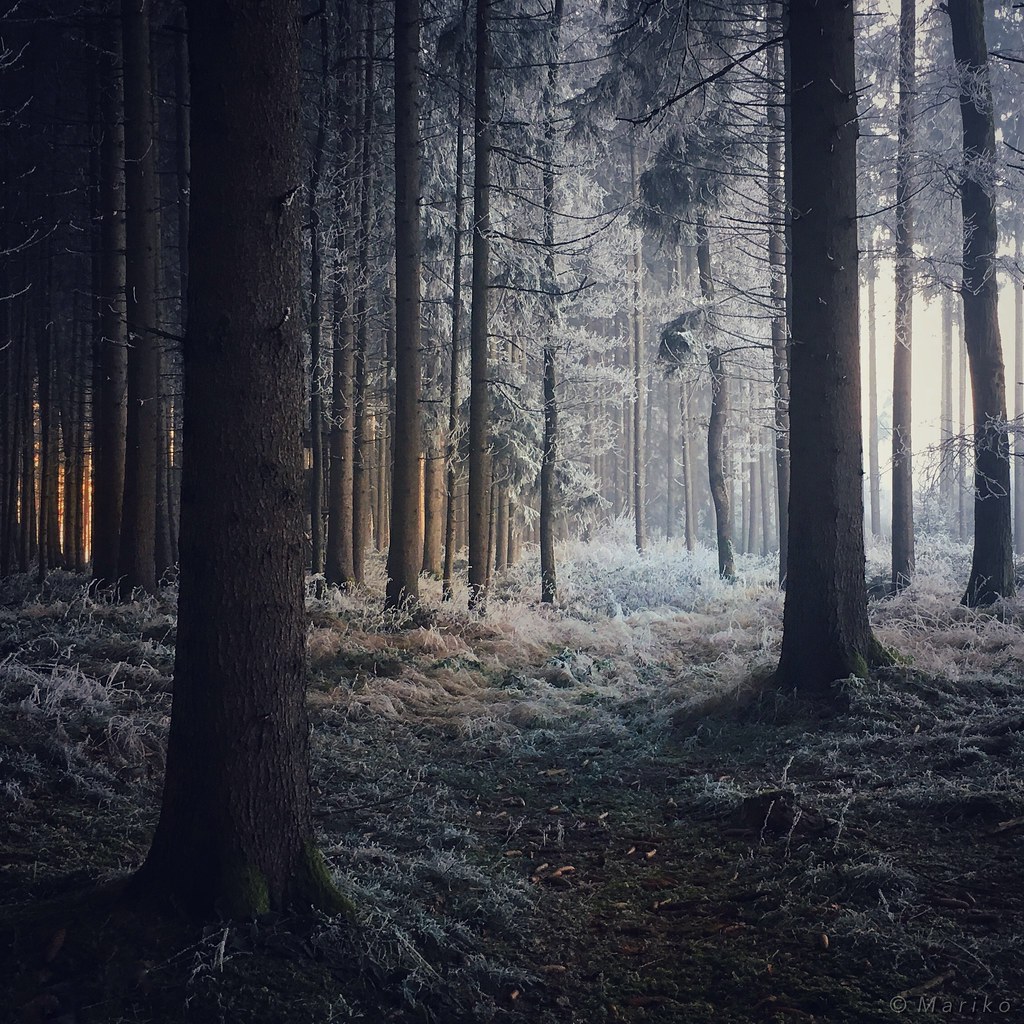 Apps used: Shot with iPhone 6s and Hipstamatic 330 and Snapseed.
Backstory: It was a perfect winter day for me: frost and fog. There was a great chance to get some moody shots so I went to a nearby forest and was not disappointed. It was otherworldly beautiful, everything was covered with hoarfrost. Just in time the sun came through and lighted up the forest in the background. This photo was taken with Hipstamatic. As I was not happy with the effects I removed them all. I used the brush tool of Snapseed to light up some areas and to intensify the colour of the light in the background. Finally, I added the Vintage filter #9. 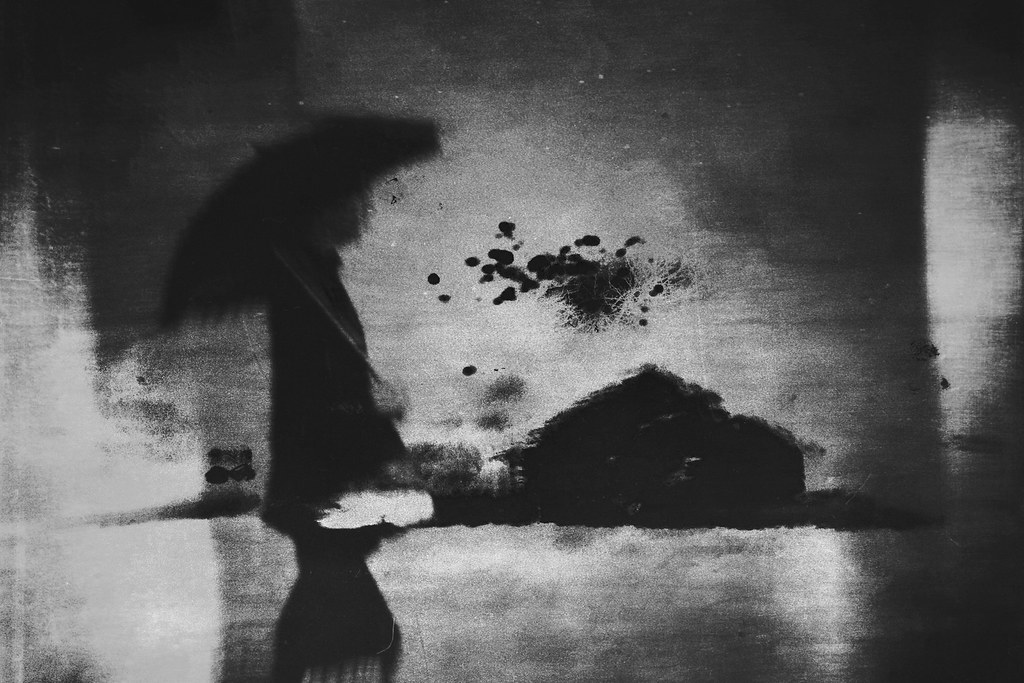 Apps used: Slow Shutter Cam, Snapseed, Leonardo Backstory: This particular image is a composite of two different images. Both were taken with Slow Shutter Cam. I took the background image at the end of the year. It shows a fireworks display at the turn of the year. That’s not immediately recognizable because I’ve inverted the color channels. The foreground picture which shows a person with umbrella I have taken in the summer before. After I’ve chosen the images I did the basic work in Snapseed. Then I switched to Leonardo. There you can work wonderfully with different levels, opacity and blend modes. In my opinion Leonardo has almost everything the photo artist needs. I superimposed the photos, paying attention to a good composition. The blend mode of the upper image is multiply, so the dark colors are preserved and the bright colors disappear. The final steps, converting to black and white and the fine tuning, I made again with Snapseed. I hope you like the result. 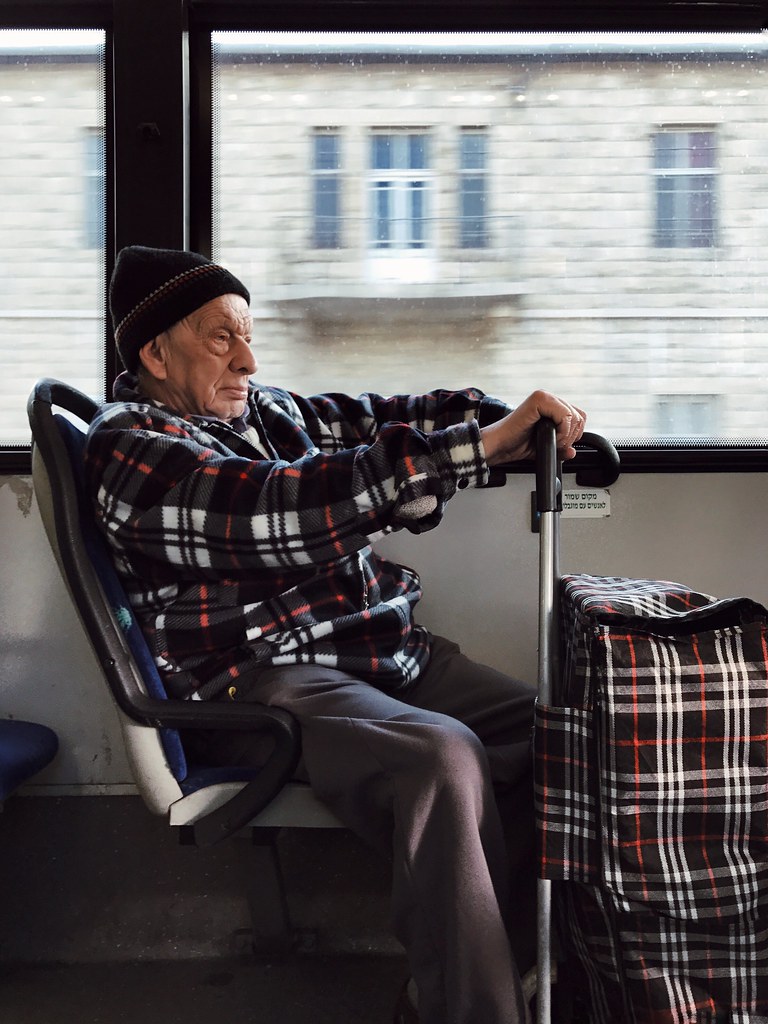 Apps used: Shot with an iPhone 7 plus, front camera. Cropped and processed with VSCO se3 preset on an iPad Pro.
Backstory: Winter. Self Portrait with my wife,Bonnie. I wanted an image of us, together. She unexpectedly moved nearer to me and kissed me, I returned the kiss while triggering the shutter. I believe the image works due to the determined, almost desperate, melding of the two faces, especially in the line where they touch; this bonding is strong yet tender at the same time. 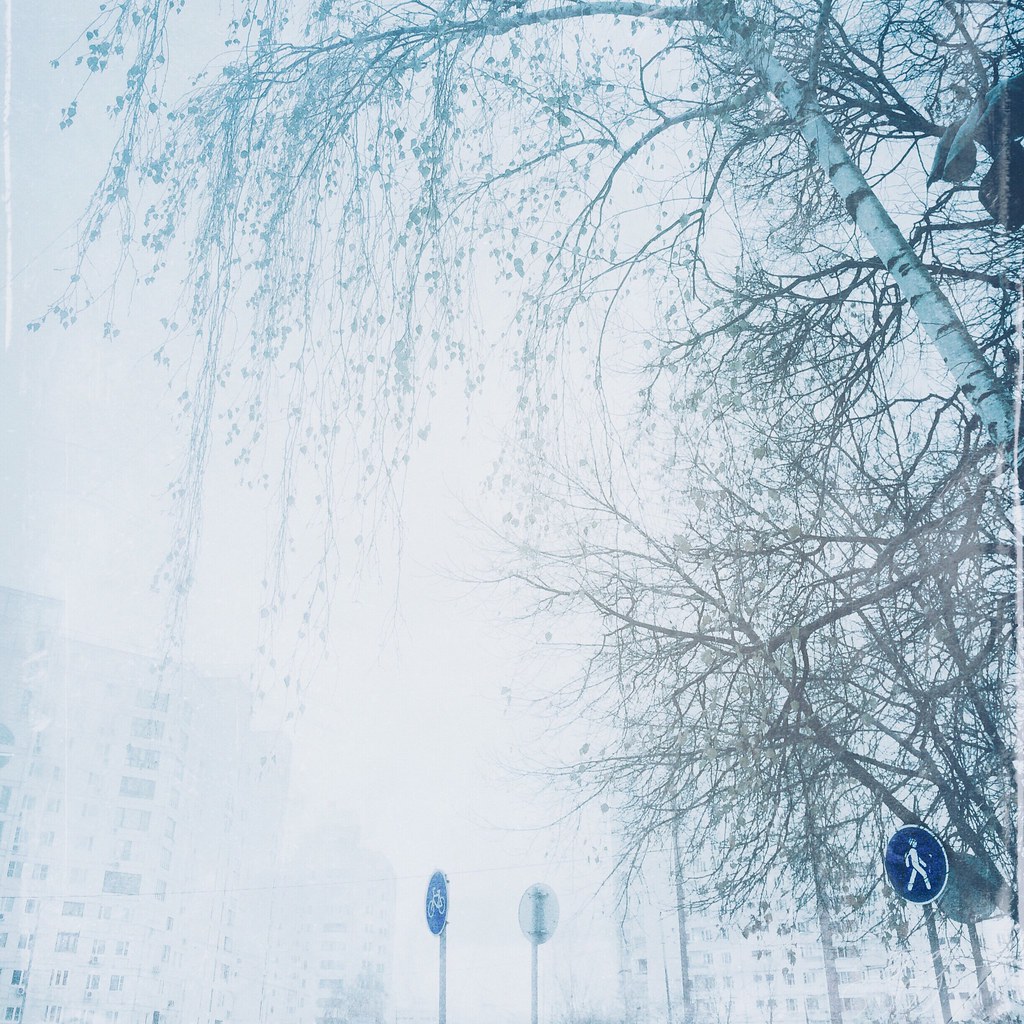 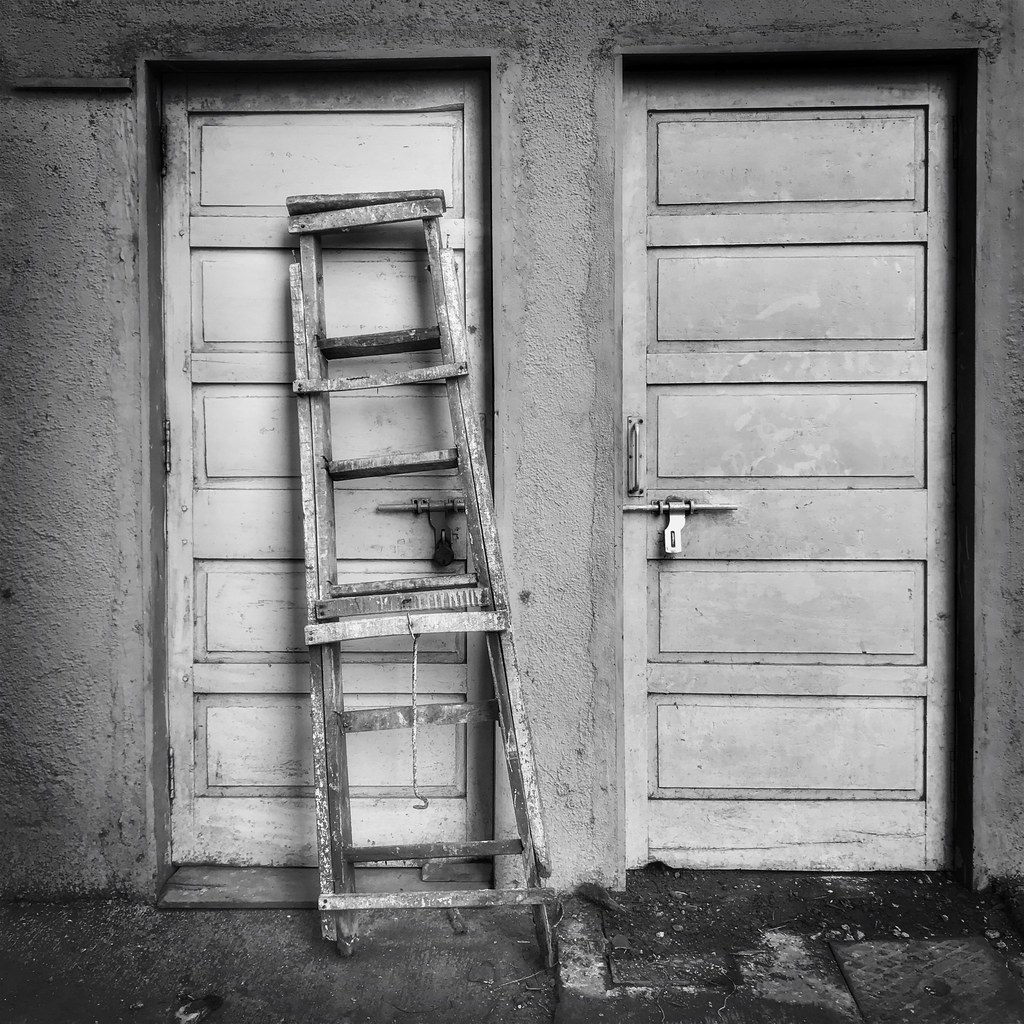 Backstory: This is just a beautiful, waxy potted succulent at my mom’s front door. it was pouring rain when I took the image, and well worth stopping to take in the beautiful geometry. I used the Blackie app on my iPhone and warmed up the tones in Snapseed. That’s it! 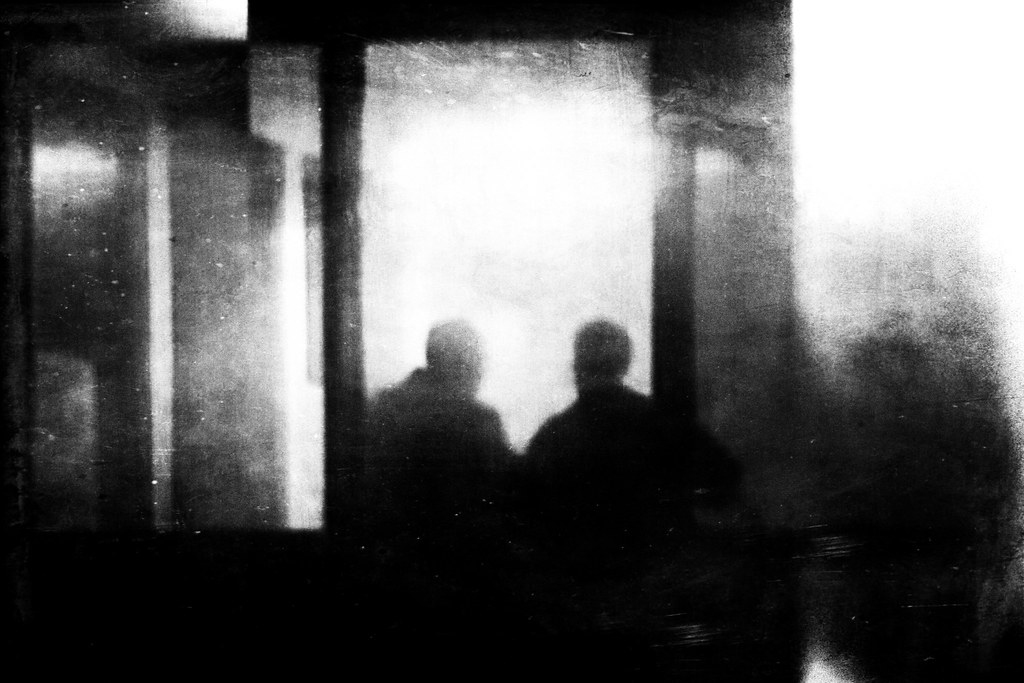 Backstory: I love walking and taking pictures at night. On one of my walks I saw these two men in the lighted hallway of a building. Great scene I thought and took a few shots. Back home, I immediately started with the creative post-processing. First basic work like aligning, straightening, cropping, and so on I did in Snapseed. Then I switched to Mextures. There you can find wonderful prefabricated formulas and effects. I chose an effect from my favorite category “Destroyed Film Formulas” and played around with the settings until I liked the result. The color photo I liked very much. Now I needed a black and white version. For this purpose, I switched back to Snapseed and transformed the color photo into a black and white photo. The black-and-white filter in Snapseed allows you to experiment with different color filters. For my picture I chose the red filter which gave it more contrast. É voilà, that’s it! 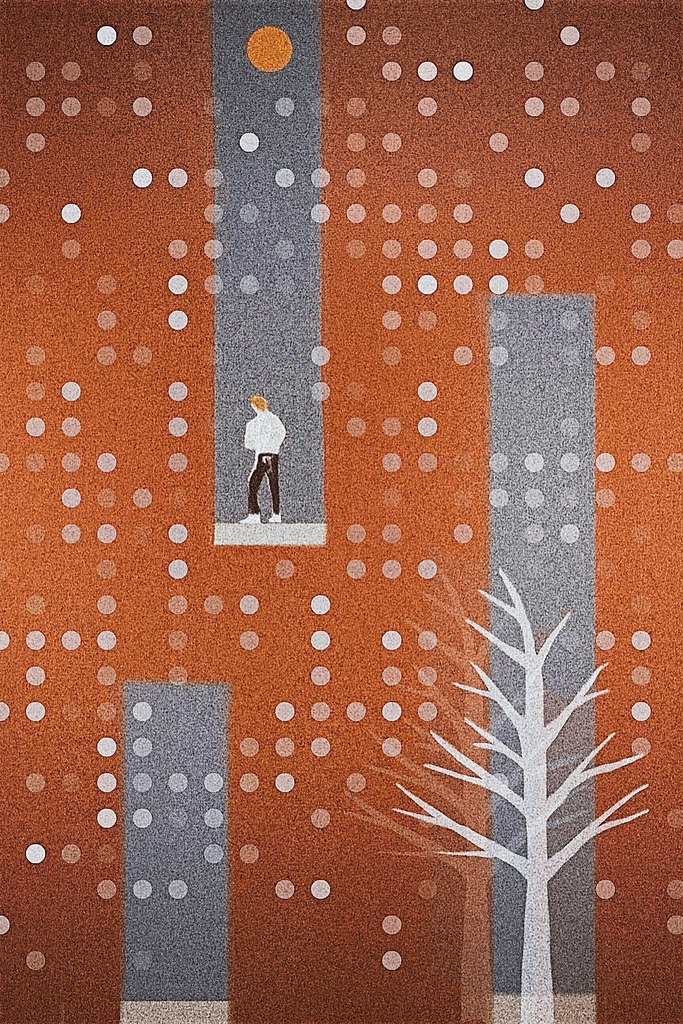