Bob and I have enjoyed selecting themes for our weekly choices and this week the broad theme of “light” in photography seemed to suggest itself very strongly as I browsed the hundreds of images in our iPC Flickr group. – Oh and I chose a couple that just had to go in notably “dog day afternoon” by Julia Nathanson that made me smile.

Along with composition, light is an essential part of picture making. Without light we don’t have a photograph and I hope you’ll agree as you browse this week’s Apps Uncovered that these mobile photographers and artists featured craft that light into some of the most incredible images.

The leading image this week is from Apps Uncovered regular, Suzy Blase, who plays with light in the most magical ways creating dreamy and surreal worlds, sometimes with a touch of sadness, but always beautiful. This particular image is different from Suzy’s usual work but still retains her hallmark of dark beauty which makes her images so strong.

Also included this week is our Apps Uncovered regular and master of light David Ingraham. Notice how the curved shapes of the windows in his image “Every man must do two things alone…” echo the curved top of the silhouetted man’s head. David has an amazing talent of composing shapes and shadows into wonderfully dynamic compositions that leave unanswered questions about the figures that inhabit his pieces.

And finally, don’t miss miss Mariko Klug’s stunning image at the end of our gallery “Autumn Pastels”, an absolute marvel of composition,colour, tone and texture. Notice how the superbly talented Mariko works the light in this image.

Please check through the rest of this week’s gallery and pay special attention to how these keen observers of light have used them in different ways to express the subject, story and/or emotion in each image. If you like an artists work, I encourage you to click on the photo and have a look at their photo stream on Flickr. 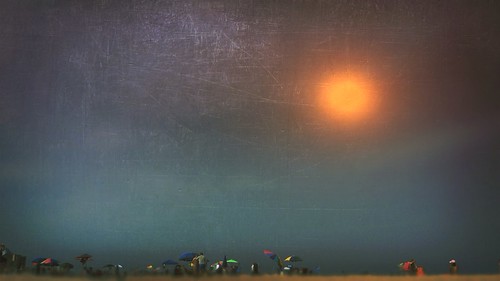 Backstory: This photo was actually one of my favorite of the summer, so I am proud to have it selected and I think even though my style is often very eclectic, its a good representation of what I do with color.

I love the summertime. When I am at the beach, I take loads of photos. I normally don’t look at them until I get home, and often very “random” shots become most interesting. I think beach shots can be difficult to make unique, so I try to use odd angles and perspectives so they don’t end up looking the same. A lot, such as in the case with this, are taken from me laying on my towel with the lens in the sand. One day I will be sorry from sand or water damage, but hazards of the trade I suppose!

I used the crop to make it more panoramic in Tadaa, as well as blurred out the ends. I liked how it almost made a diorama effect and the sand looked to be sweeping up from the bottom of frame. I amped up the sun with Vintique and Mextures, as well as played around with the texture in the horizon. I loved the hazy effect it started to take on, and then tweaked that in PhotoToaster even more. I finally got the perfect tone and feel of a mid summer day at beach, with a bit of a surreal edge that I tend to favor. To me the sun was the driving force behind this piece, so I wanted the title to simply be that. I was sure along the way I used the word Sun as a title in the past, so I used the Portuguese version instead. Hopefully it brings some warm memories to many of us who are heading into winter. 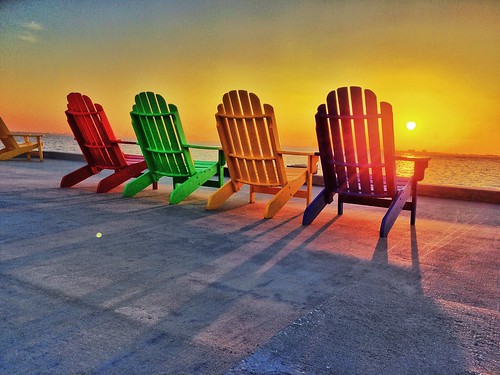 Sunset over Sarasota Bay from Ca’ d’Zan by Lawrence Lazare

Apps used: I shot the photo on an iPhone 5s using VividHDR and edited with Snapseed.

Backstory: I moved to Florida this year after many years in the Midwest. The challenging thing in taking landscapes here is that you don’t have the changing of the seasons. I particularly miss fall. In order to find ways to keep my landscapes fresh, I try to find new locations and try to find new ways to shoot the beautiful beaches and sunsets here in Sarasota.

This shot was taken at Ca’ d’Zan, the beautiful masion built by John Ringling that overlooks Sarasota Bay. Near the water are a series of colored adirondack chairs, and some of them were lined up perfectly, creating an interesting viewpoint for the sunset. 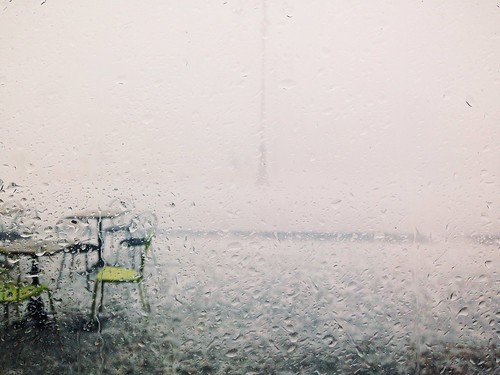 The day the world rained down by ale2000 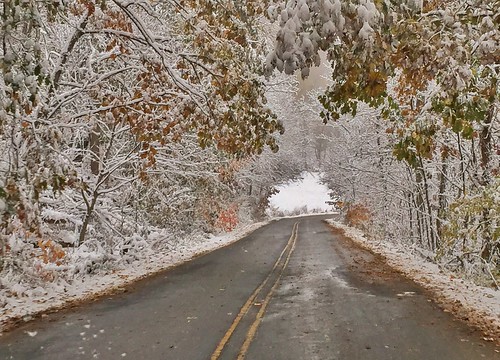 Backstory: Found this beautiful sight while on a road trip to NC with my husband. It was Halloween weekend, when interstate 40 was closed at the TN/NC line. We had to take a detour across the mountains. Scary road, but the view was worth it!

waiting in hope by David DeNagel

Backstory: Cemeteries are generally quiet reservoirs of structure,shadow & light. By their very nature,they are also full of associations,memories and reminders of mortality. Bellefontaine Cemetery in St.Louis, MO is no different. It is rich with history and very old trees; and the prevailing atmosphere is one of peace & solemnity.
I spent an entire day there photographing some of its many moods & monuments. However,as I was leaving at sundown,I saw these four simple,identical graves in a row ,each with a prominent cross. The inscriptions indicated only that these individuals were all members of a single family; their names & separate dates of existence the only variable.
But It was when the autumn twilight filtered through the trees and shone on the graves that the scene truly became a visual event.
Based on the way these four human beings had chosen to be buried “Waiting in Hope” seemed to be a proper title. 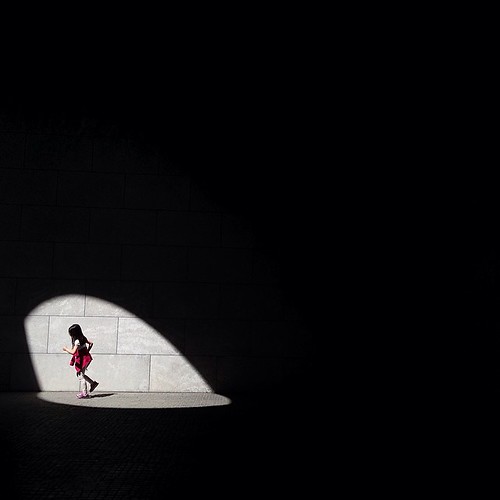 Hope in the darkness by Başak Aytek

Apps used: Captured and edited on an Iphone5. My editing process was very limited. I used Snapseed to crop the image and adjust the brightness and contrast.

Backstory: This place is a memorial in Berlin for the victims of war and dictatorship with a sculpture (Mother with Her Dead Son) in the middle. The circular skylight on the top is the only light source of this place. Together with the silence inside and the kids playing around, it is a perfect place to highlight the contrasts of life; life and death, darkness and hope, joy and sadness. 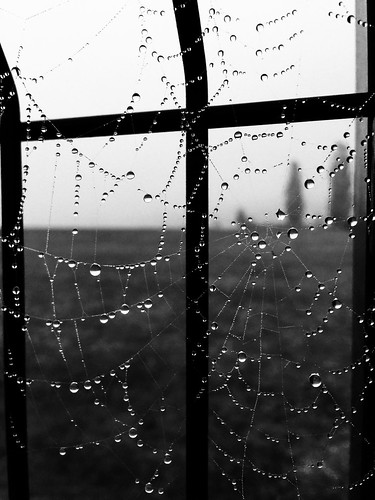 Another foggy morning by Lasteg Vadim

Apps used: The snap was edited with Snapped only. In addition to it I quite often use PS Express. Recently I’ve been playing with SlowShutter app, but looking for an alternative now.

Backstory: This was an early foggy autumn morning and I decided to take a walk to my work instead of taking the bus. Have to say, I quite often taking longer routes thus I can find hindered views. But on this particular morning I was looking for a trees in fall vanishing in the haze.

I’ve noticed a net with water drops on the fence and thought that this picture would be a pretty good description of my mood that morning. Then I’ve tried to keep a nice composition also wanted to have a good depth of field. TIP: to achieve good DOF with an iPhone one should be really close to the object. I took at least 3 pictures of this net from different angles and different focus spots. 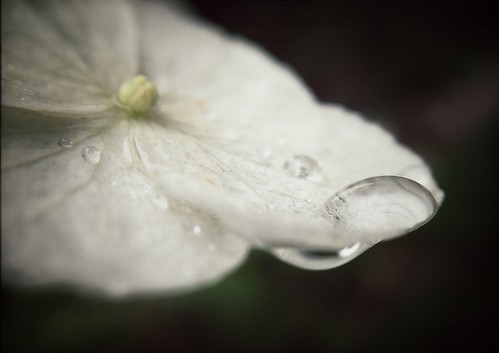 |Apps used: Captured on campus with iPhone and Olloclip Macro Lens. Edited on the iPad with Perfectly Clear for some sharpening then Snapseed for light adjustments, some texture and boarder.

Backstory: A drippy white Hydrangea flower from back in June on a dark rainy day. Now that iPhoto for mobile devices is gone in the new iOS, I am in need of an app with brush on sharpening. I really miss that sharpness paint brush. I very rarely want to have the whole image from my phone photos sharpened. I thought I had one in my kit somewhere but Im not finding it. Too many apps I guess. If any of my flickr friends knows of an app with good gentle brush on sharpening please pass the name along. 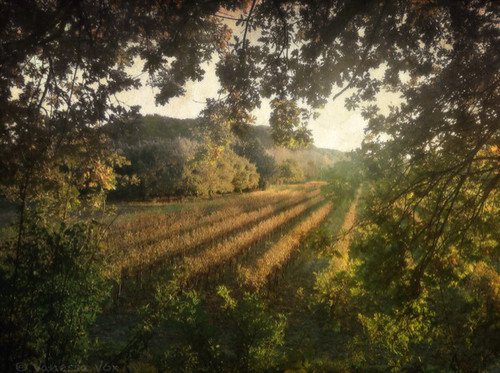 Backstory:
Late afternoon in november here in the Drôme Provençale (France). The magic warm light colours the scenery. The golden leaves of the wine are glooming. They will soon fall off. But some plants like the evergreen oaks in the fore- and background ignore the winter season. They keep their dense green foliage during the whole year.
On my walk I discovered this natural window which opened such a beautiful view. It invited my mind to drift off into the autumn light.
For the editing process I used „Phototoaster“ for sharpening and colour matching. For a second step I created different versions with the textures of „Stackables“ and „Classic Vintage“. And finally I mixed them up with „Blender“ to receive the intended result. 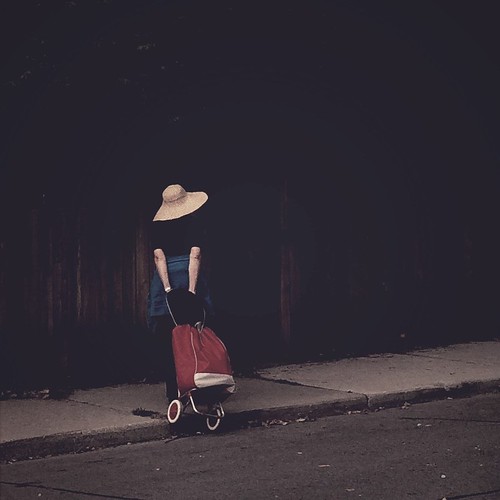 lady with a red cart by Julia Nathanson

Shot with Oggl using Madalena lens and Blanko1 film.
I saw this dog (and its master) approaching a black fence and ran ahead so that I could capture it with the chalkboard-like background. The leash is completely camouflaged, so the dog appears to be wandering on its own, having its own adventures. It feels like the cover of a children’s book.

Backstory: I caught this neighbourhood woman in the midst of a minor struggle — awkwardly pulling her shopping cart onto the curb. The lens/film combo used gives her arms and hat a fragmented look, adding weight to a simple moment. 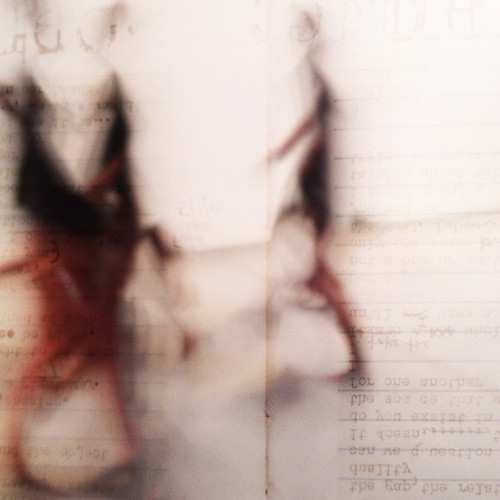 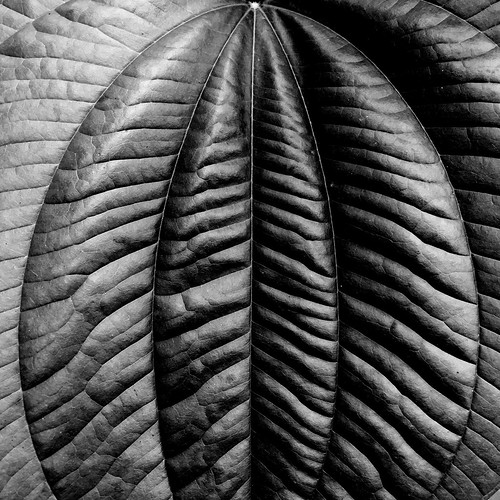 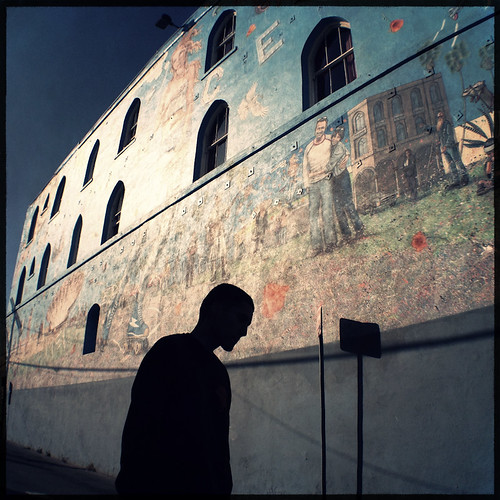 “Every man must do two things alone; he must do his own believing and his own dying.” Martin Luther by David Ingraham

Backstory: This image was shot in Venice Beach, CA earlier this year. There’s a great alleyway there that I visit whenever I go shooting in Venice, due to how beautifully the light hits it in the late afternoon.
I almost always edit my images in one way or another — usually to heighten the mood and strengthen the tones — but this was a rare case of a straight-out-of-camera Hipstamatic shot — no edit necessary — using the Wonder lens with Rasputin film.
There was a bit of a lonely, solitary vibe to the shot, so I posted it with this Martin Luther quote: “Every man must do two things alone; he must do his own believing and his own dying.” A bit of a downer maybe, but a profound quote nonetheless! 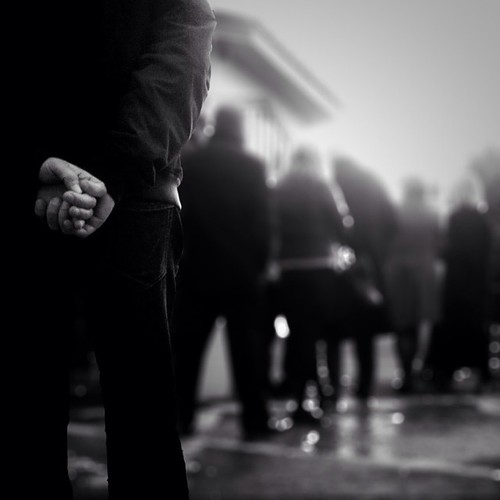 Apps used: Hipstamatic (Akira & Blackeys Extra Fine) & Tadaa.
Backstory: The shot was taken at a funeral I was at recently. I am not a religious person in any way shape or form but something I have noticed on the occasions I am in a church such as funerals or weddings is that people never seem to really know what to do with their hands. This holding hands behind the back seems to be what the men do more often than not 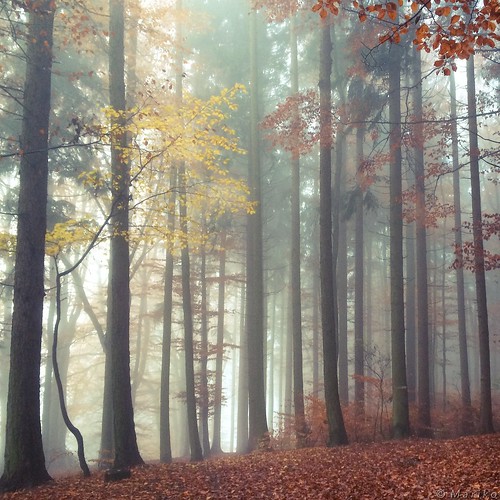 Backstory: I’ve been waiting a long time for a foggy day like this. Then it finally happened last week and luckily I had a day off, so I got up very early and went to explore a forest near Ebersberg in Bavaria, Germany. I just couldn’t get enough of how incredibly beautiful things look shrouded in fog. The fog turned the vibrant autumn colours into soft pastel tones and created such a mystical atmosphere…