Hello! My name is Kate Hailey. Thanks to my friend and fellow iPhone creative, Nicki Fitz-Gerald, I’m selecting the images for this week’s Apps Uncovered.

A little bit about me, I’ve been a photographer since I was a teenager and purchased my first IPhone in 2009. For me this presented a new world of creativity, capturing, editing and sharing images immediately. I’m sure most of you read this blog for that very reason, to see what apps people are using to achieve certain effects. It’s also a wonderful way for us, as artists, to connect with one another, share our work stories and experiences.

With that in mind, I have spent several days reviewing images from the Flickr pool. I noticed a variety of things that stood out for me, without any particular theme in common, however with many I’m noticing being drawn to bright colours as well as emotional self portraits. I suppose we all have different views on what’s interesting, so hopefully you’ll enjoy these selections. 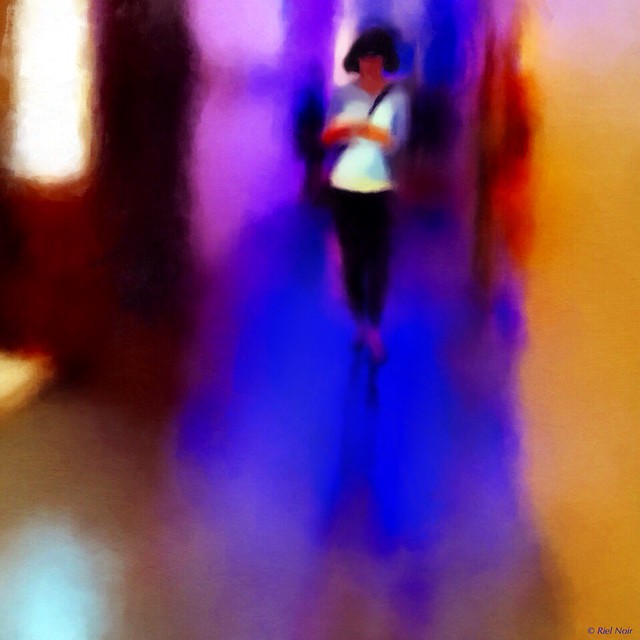 Back Story: Recently I began a series of images from photographs taken at the opening night of exhibitions.

This particular image was captured in the corridor where there was a lovely play of light that included intense colours reflected on the floor.
It was a busy space with viewers making their way from one exhibition space to another, but, I managed to capture one isolated girl as she walked towards me whilst reading her catalogue.

For a long time I have been resisting the full on painterly look, but, with this series I find myself embracing it.

Editing in this painterly fashion suits the way by which I want to remove the subject’s features creating a more anonymous figure that blends into the background, or alter them in such a way that it no longer represents the person.

Backstory: Met up for brunch in Shoreditch, London one sunny Sunday and then we went for a photo walk. We all spotted this beautiful old car and everyone took its photo from across the road. I loved the length of the road plus the light and shade and the girl in red taking the photo, so preferred that POV. I did basic adjustments in Snapseed, then took photo into Brushstroke and used a lovely, painterly effect. I didn’t want the effect on the whole photo so opened both photos in Superimpose, blended them together and erased the painterly effect on some of the areas 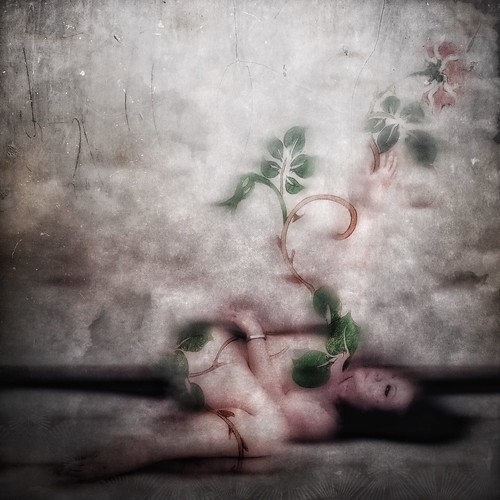 Michelle Robinson: “Remember that wherever your heart is, there you will find your treasure.” – Paulo Coelho, The Alchemist

Backstory: This is one of the images as part of the Self Portrait Challenge that I have taken part in. I was driven to create an image that is a departure from my usual angst-ridden self-portraits. 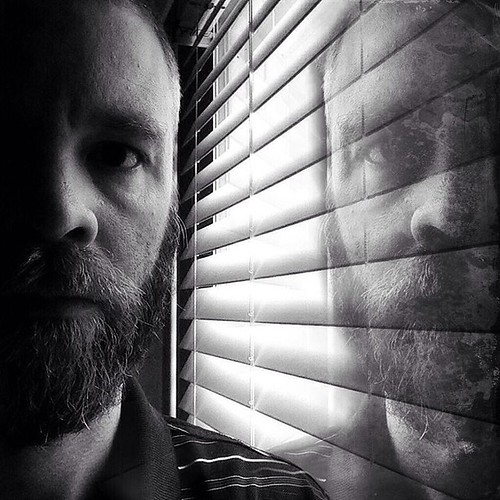 Backstory: Back in May, I decided to take a self-portrait where I wanted to show two sides of emotions I was dealing with at that time. The left side shows me behind the pain and the right side shows me torn with emotions.

In terms of editing, I Initially wanted to do a mirror image on both sides but I thought it would be interesting to make the right image more like a ghost within the blinds. In the end, the image came out exactly how I envisioned. 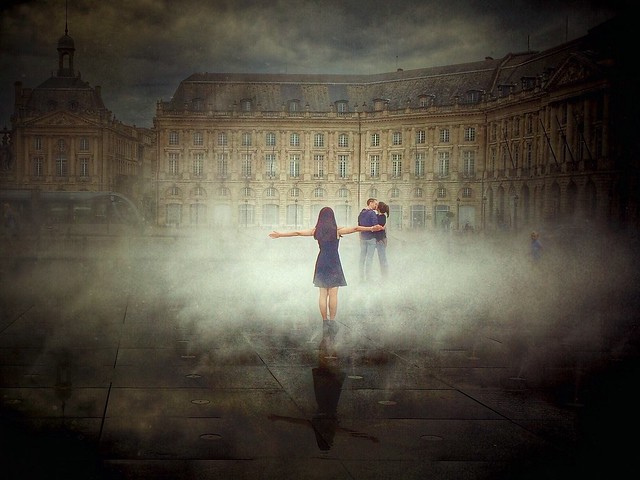 Backstory: I used for this Snapseed and XinViewFx image, the woman in black was a Chinese tourist who asked for her friend, she did not see the couple kissed and when she turned around she opened her arms! I use my iPhone 5s phone for 2 years and I mainly use Snapseed as basic editing, I then use applications such as stackable XinViewFx and sometimes both together! I always put a little HDR Snapseed to give some light then I put a filter Retro, I then passes XinViewFx to rework the color and light.

Backstory: A little lighthouse in Camden, Maine. Hard to find, but worth the trip. A quiet shore with large log to sit on and enjoy the view of the island and lighthouse.

I did not immediately process the photo in any apps as we were on vacation in Maine. We traveled up and down the coast enjoying the seafood and scenic wonders of Maine. One of our favorites stops was Camden. Our host at the Bed and Breakfast told us about the Curtis Island Lighthouse that we could visit while we were traveling to Rockport. It was hard to find, but we did. After a short hike down a small path through the woods, we came to a small secluded beach and across the bay was the lighthouse on an island. We sat on a large log and enjoyed the view of the bay.

The process: I started this image in Snapseed, adjusting the light, shadow and contrast, saving the image. Next I opened it in MonetHD. Monet converts the image to a black and white line illustration and you put the color back into the image…but it is more illustrative and color is bright. I then saved the image and opened it in my go-to app Repix. Love this app because I can create a pastel like painting with the chalk brush. If I over do it, I can use the undo brush to gently erase part of the effect until I get it where I want it. I also use the hatching, drips, dots, and other brushes in Repix. When satisfied I saved the image and opened it in Procreate. Procreate allows me to add layers, i.e. my signature and other brush strokes. Layers allows me to add or subtract things without disturbing the base image. The sky was a bit flat so I added a layer for the clouds and painted them in. With layers, if you don’t like a layer, you can just turn it off and come back to it later or delete it. I saved this image to my camera roll and uploaded it. I hope you enjoy it. 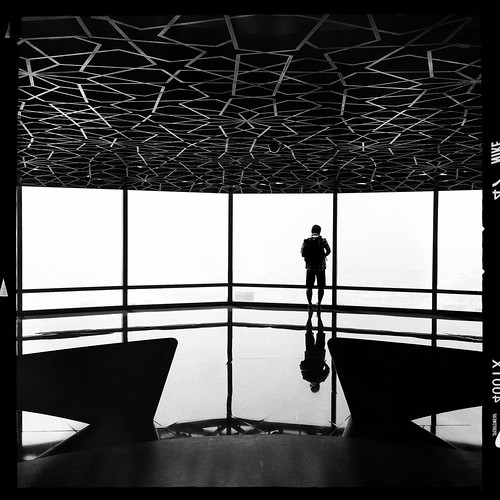 This photo was taken at the top of the Burj Khalifa in Dubai using Hipstamatic AO DLX film and Matty ALN lens with no additional editing. I chose this combination for the contrasty effect and had to wait a little bit to get this shot as this place is usually busy.

Backstory: I shot this using the front-facing camera of the iPhone 5 s. I was looking for something that would have more of an alt-process/hand-coated feel to the work, and the lower tech of the front facing camera added to that. I processed the image in Snapseed, then Mextures, and finally did the coloring in Alt Photo. 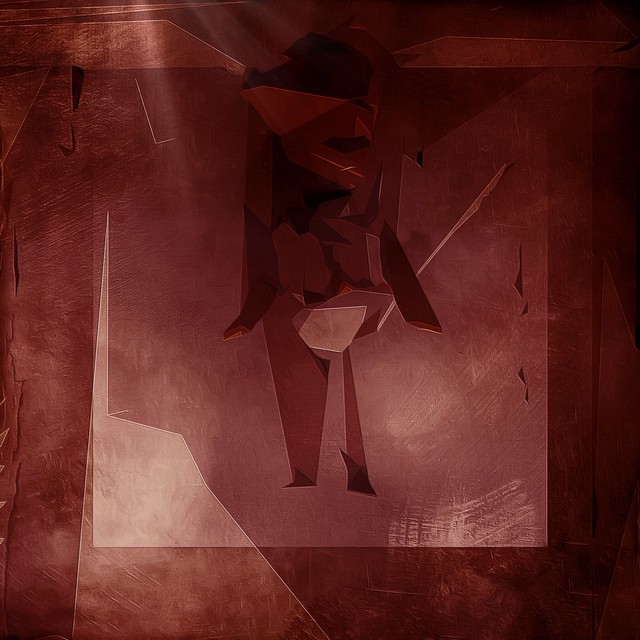 Meri Aaron Walker: “Everything That Makes Me Drown Makes Me Want to Breathe”

Backstory: This piece still hurts, and it’s been over 10 days since I made it. I made it for my friend, Tommy Vohs, a wildly talented woman who is both a highly skilled iPhoneographer and a train engineer for the Canadian rail system. Tommy and I have been friends online since I first started sharing my mobile artwork. We’ve been chatting lately about how hard we – and so many women have worked – our whole lives, reaching for a little fresh air of respect for the work we do.

Some of have had long careers in fields where women have only recently arrived like photography and train engineering. And some of us, as we look around at the news and continue receiving less than full respect for our professional contributions feel some days like we’ve been working for nothing for six decades. This piece came to be out of needing to turn sadness and disappointment into creative energy for me and for Tommy and the rest of the professional women whose friendship has meant the world to me, my whole life.

The piece started with a shot that I made in Venice Beach, California, visiting with some other women iPhoneographers in July. Around the corner from their home is a vacant house where people make and leave arrangements of all manner of things toys and plastic flowers and blocks and shoes. You name it. Some things are nailed right to the side of the house. In this case, a doll was nailed upside down to the siding. I shot it with Camera+ one afternoon.

I made an edit of the straight shot which I published separately. But, for this piece, I went back into my archive for Tommy, used Imaengine to generate some line work, turn the image upside down, and then recolor it in dark shades of red and brown and black. Then I blended the original with the line shot using iColorama and used the dodging and burning and clarifying and drawing tools in iColorama and Leonardo to bring the dark figure into better contrast with the background. Finally, I added a bit of light coming from the top left, using LensLight.

It’s a tough piece of art that helped me resolve some tough feelings and come out wanting to breathe deeper, instead of dissolving into feelings of despair. The response from friends in the mobile art communities in which I participate both male and female lifted my spirits. And I hope Tommy’s too. I appreciate being able to share it here in IPC.

We hope you enjoy this peek into the minds of these awesome iPhoneographers.

If you’d like to be selected, be sure to share your images to our Flickr pool. As well it would be great if you can include the apps you’re using and a bit of the story behind the image!