Youth (comparative and actual) is the underlying theme for this week’s Apps Uncovered selections. It’s hard to say whether this week’s photographers set out to capture youth as a concept, youth as an experience, youth as a moment – but capture it they did.

So many writers have spoken of youth (by all appearances, after it had for them become something in the past) – and all these images evoke one or another aspect in this small collection of quotes:

How beautiful is youth! how bright it gleams
With its illusions, aspirations, dreams!
Book of Beginnings, Story without End,
Each maid a heroine, and each man a friend!
– Henry Wadsworth Longfellow,
Morituri Salutamus (l. 66)

This week’s lead artwork, “For the love of Summer” by Paul Suciu, evokes that moment in the evening, when children are racing home because they remember their mother’s admonition to be home by sunset, while enjoying the feel of the wind rushing past their ears (and imagining the last moments of their battles with terrible enemies or their victories on the sports field) – but perhaps already thinking of the dessert that will follow dinner. 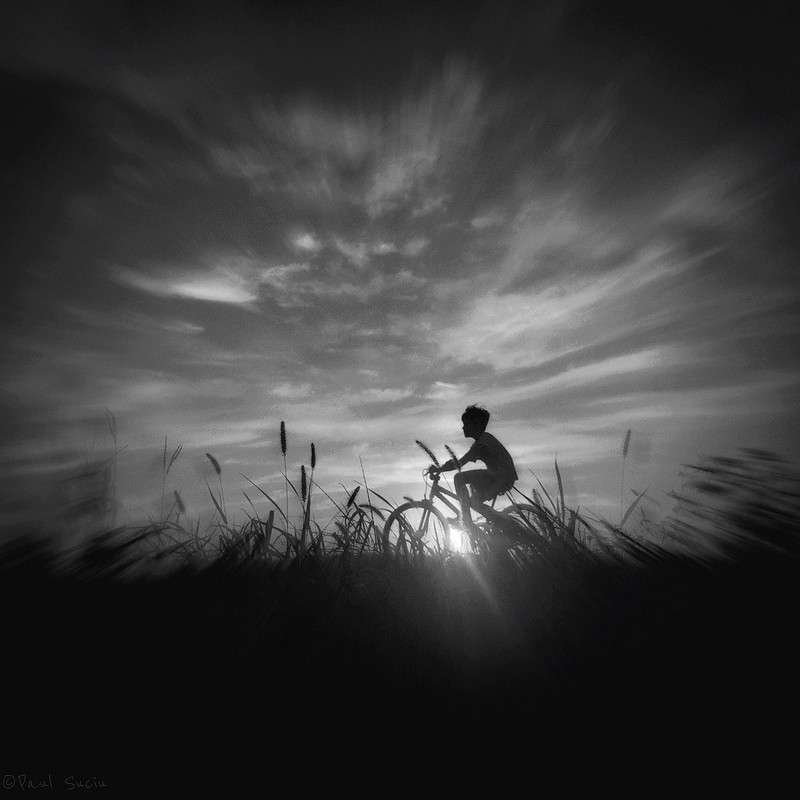 For the love of Summer by Paul Suciu

Apps used: Hipstamatic – Pinhole. Then I edited the contrast and exposure a little bit in Snapseed.
Backstory: I discovered a nice park in Bucharest where you can see the sunset on a lake, therefore the light is amazing. I waited in a place for people to pass by and I saw the kid with his bycicle, and I tried to catch his silhouette against the sun. I think I was lucky 🙂

Apps used: Snapseed, Image Blender and Formulas
Backstory: This is a portrait of a friend. It’s one of a series. She is very photogenic and especially striking with her hair pulled back. She’s also very talented with her makeup application. In this version I wanted to bring out a little color, so I chose the bold lips and faded out the eyes for balance. Her portrait was merged with a photo of a window I had taken, the backlight revealing shadows of branches against the shade. I was going for old Hollywood glamour…flawless complexion, red lips and a study in light and shadow. 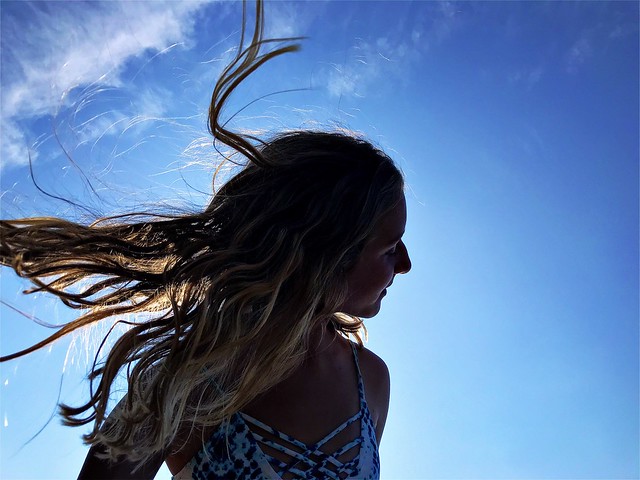 Apps used: Shot on iPhone 7Plus, edited with Hipstamatic.
Backstory: My daughter, tossing her hair by the lake. 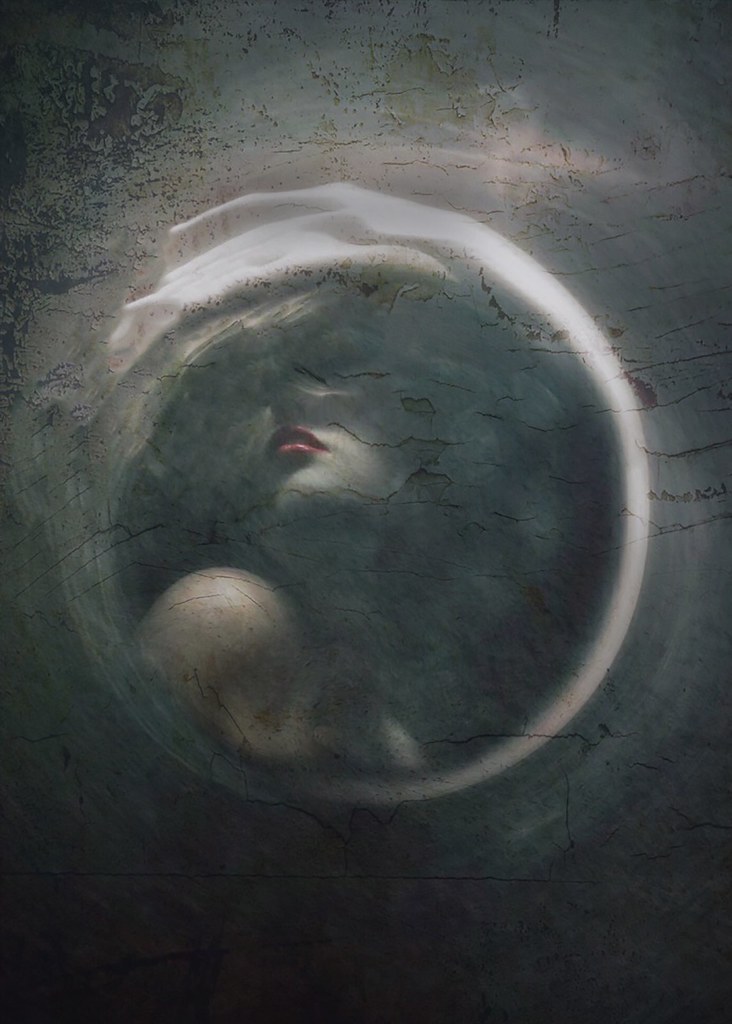 Apps used and backstory: i used the pro camera to take the photo ,then opened the image blender to mask the photo and the layers that i wanted to use after blending the layers and when i’ve finished , ive opened the saved photo with the app Enlight for the final adjustements ..i also used the tool reshaping to give that circle effect like a frame all over the portrait anf the final step was to open the photo with the app Stackables to add the final effect that you see on your screen..
the creation of the photo was a result of tumburlent thoughts that ive made one day so disturbing so i wanted to cast my demons out creating something that was mirroring my sentimental state at that moment .. when ive finsihed after hours of working .. i was feeling peace inside and awe for the image that i”ve created … 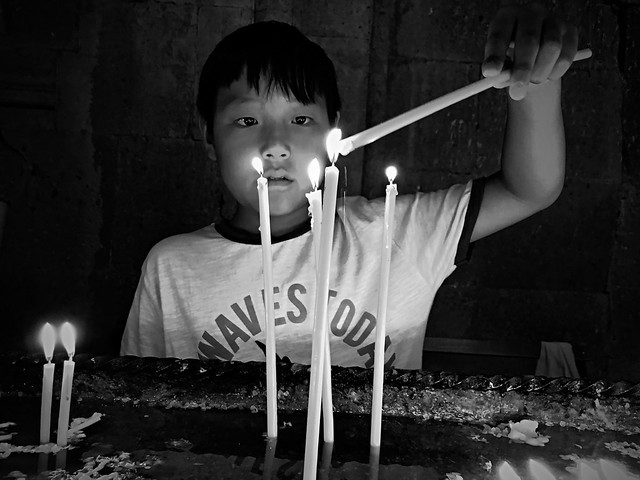 Liang and the candles by Pier Luigi Dodi

Apps used: I shot it with my iPhone 8 Plus and processed in Snapseed
Backstory: My son was amazingly attracted by candles in the Armenian churches. He didn’t miss a single one. 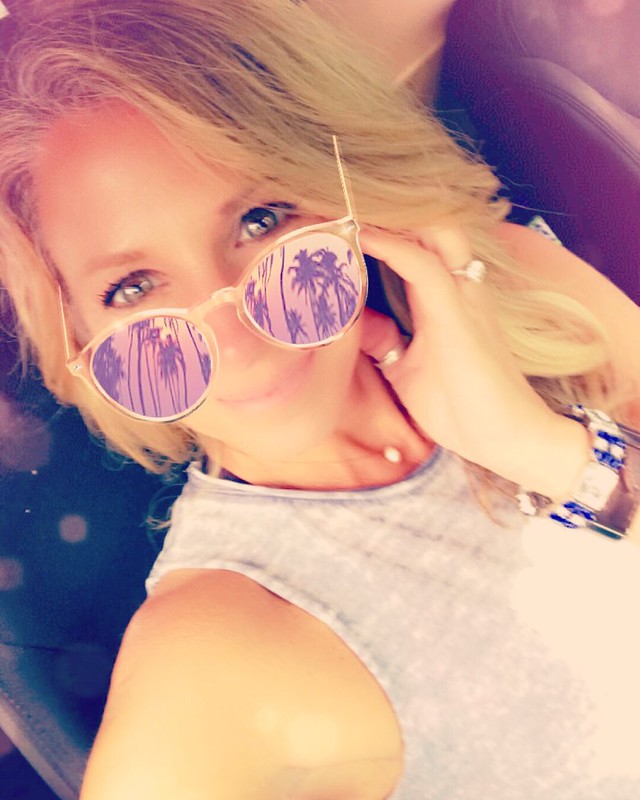 .the summer is ending blues by Allyson 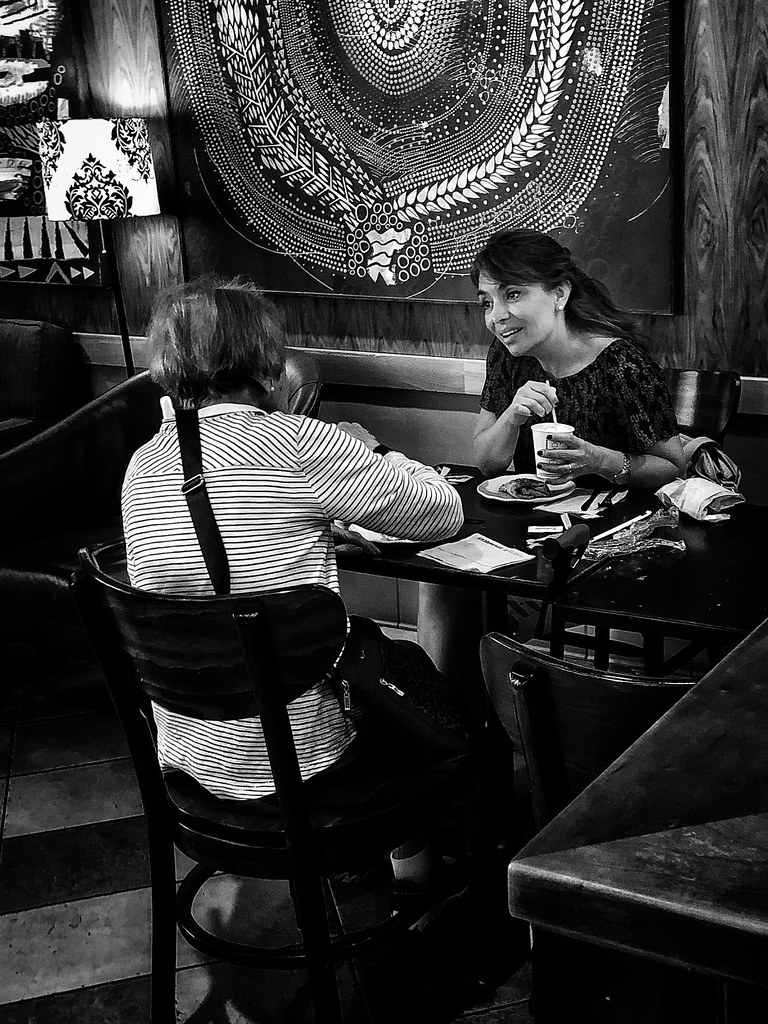 Apps used: I took several shots using Camera-M and edited the image in Snapseed.
Backstory: For several years I have been taking street photos in Starbucks stores locally and while traveling. This particular image was taken in Hilton Head, South Carolina. While waiting for my order, I noticed an animated conversation to my left.

I’ll love you, but just this twice by Kristie Michele Art

Apps used and backstory: I shot this self portrait using my iPhone 7plus in reverse camera mode, using a mirror on the wall for the reflection. I edited in Lightroom Mobile to really enrich the saturation of my red hair, so it would pop, and did a couple minor tweaks with contrast and exposure. 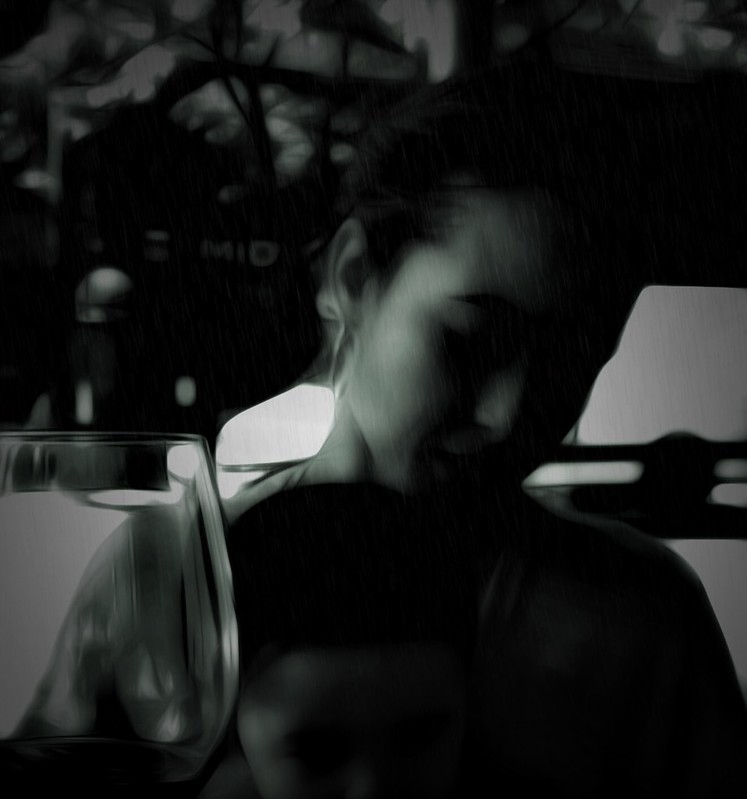 Apps used and backstory: The photo is of my daughter taken during a recent trip to New York. The apps used were Snapseed and IColorama. 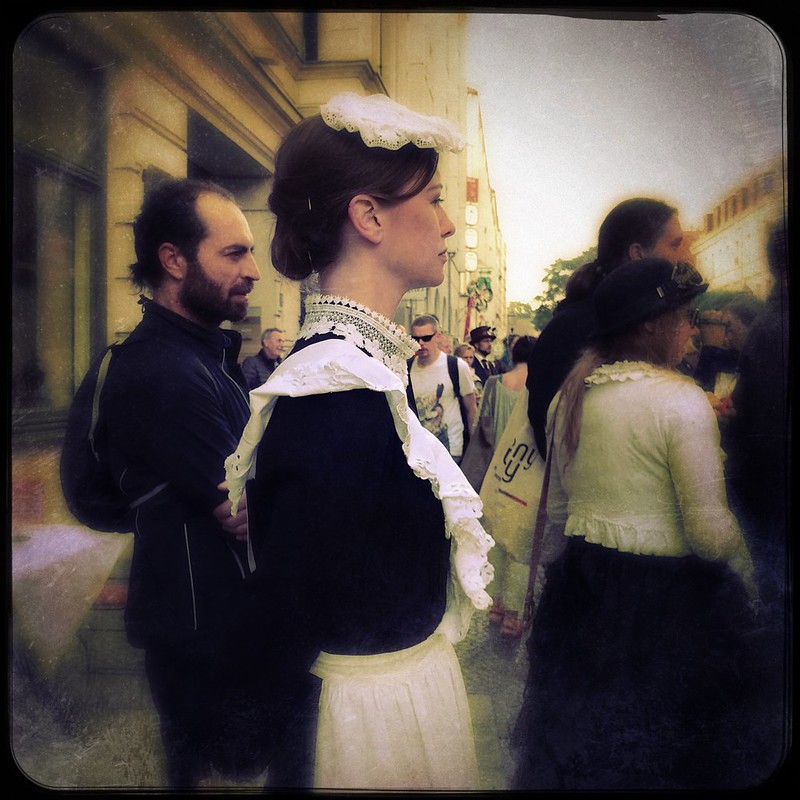 App used: Hipstamatic with Sergio lens and Love81 film
Backstory: I was in the historicized Nicolai quarter of Berlin watching an outdoor performance when I noticed this woman standing next to me. It wasn’t just her costume, it was also the way she held herself that made her look like a figure out of the past. This photo was taken with the iPhone7 for my 365 day project using only Hipstamatic photos with the randomized shuffle effect straight out of the camera.

Apps used and backstory: Having walked around Shelly Lake, Raleigh, NC, any number of times and taken many nature photos, I was always struck by the diversity of style and looks of the people jogging, walking, biking and strolling. Then when I got my Moment wide angle lens for my iPhone 8+ I just knew it was time to capture these wonderful folks as they “walked” the path as it crossed over the lakes dam. I would sit on one of the benches provided, hold my iPhone low between my knees or at my stomach and shoot as they passed. After getting home I used my iPad Pro utilizing Snapseed app to bring about the look. Totally enjoy the process, the results.