Apps used and backstory: Photo taken in Tokyo, Japan. Edited in Snapseed – converted to black and white to heighten the contrasts. It is part of an ongoing series of shots made of people through glass. I am there in the reflections, somewhere. 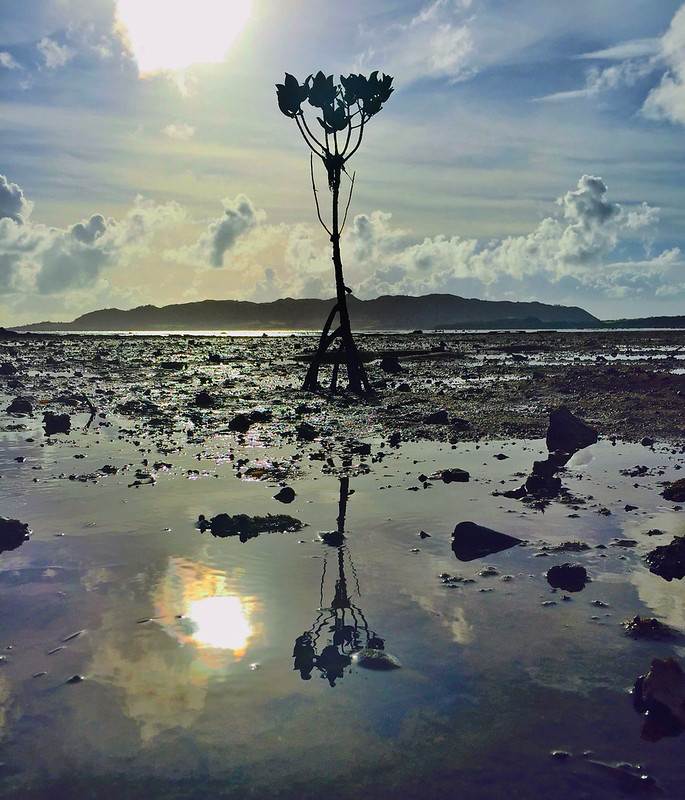 One for the underdog by Laurence Bouchard 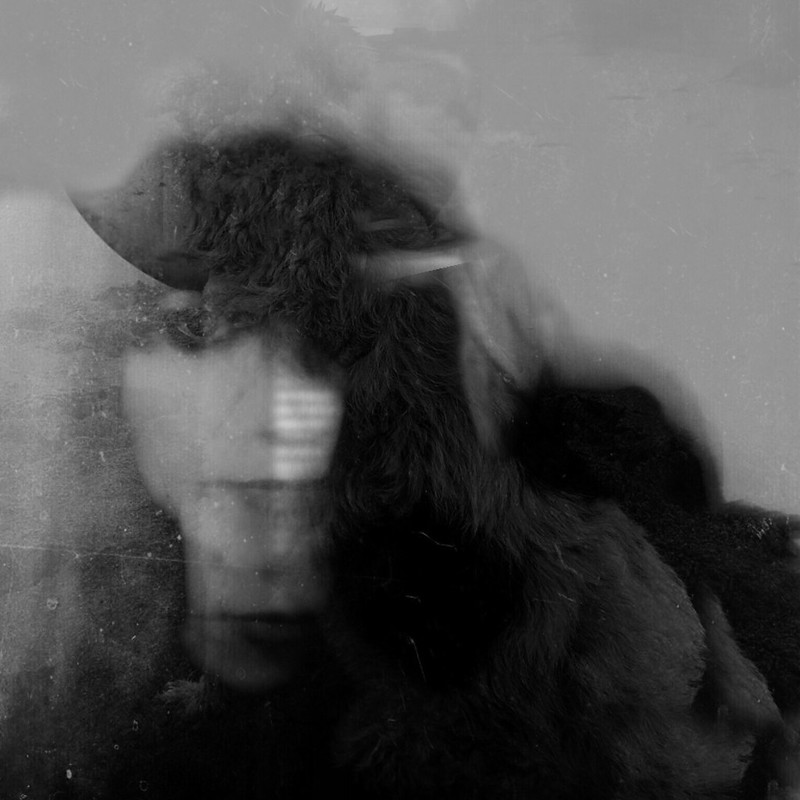 The Spirit of the Wolf by Isabel Afonso

Apps used and backstory: This image is a selfie, blended with a photo of my dog. You can see his hair as it was my hair. My dog was very ill, and I want desperately to help him, but I didn’t know how. I feel the need to melt with him, to understand his needs, to help him, them, the idea of making this image appears.

The apps I used : for the photo of the dog I only used Snapseed for the B&W and Icolorama (coherence), to make an hyper realistic air.

For the selfie, I used first Snapseed for B&W, then Icolorama (coherence), for some hyper realistic effects of the face, and clean the shadows too.

Then I bent the 2 images with Diana app, and after that I use the app DistressedFX for the textures (emulsion) and finally I use the app Photo fx Ultra (light windows), for the light reflections on the face.

For the selfie, the last step was with Icolorama, using Form (Escher) of Icolorama, which gives different expressions and emotions of the same part of the face. It works as a distortion. 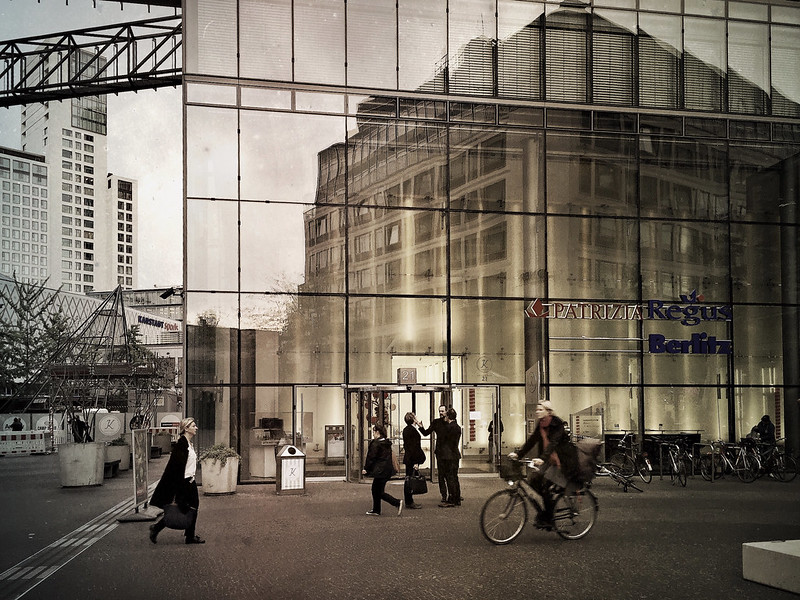 Apps used and backstory: I was taking a series of photos on the theme of reflections, and this part of the city offered many opportunities. First I fixed the vertical lines and straightened the photo in SKRWT, and then it was post-processed in Hipstamatic using the Jane lens, C-Type Plate film and Standard flash. I like the effect of just the faintest touch of color, the glow of the light inside the building while reflecting the building across, and the movement and gathering of people in front adding layers and depth to the scene. 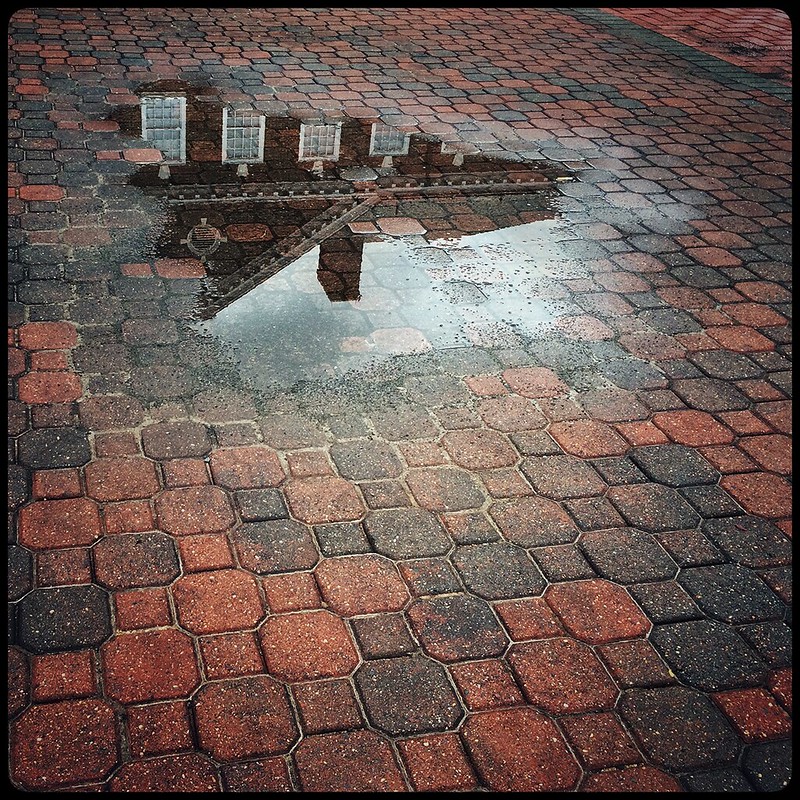 Apps and backstory: For Window Wednesdays (a Flickr group), and this week’s 100x theme of Altered Reality. Wolf Hall windows reflected in a rain puddle. Captured last week on a rainy morning while moving around campus. Used the usual iPhone and edited on the iPad in Snapseed. 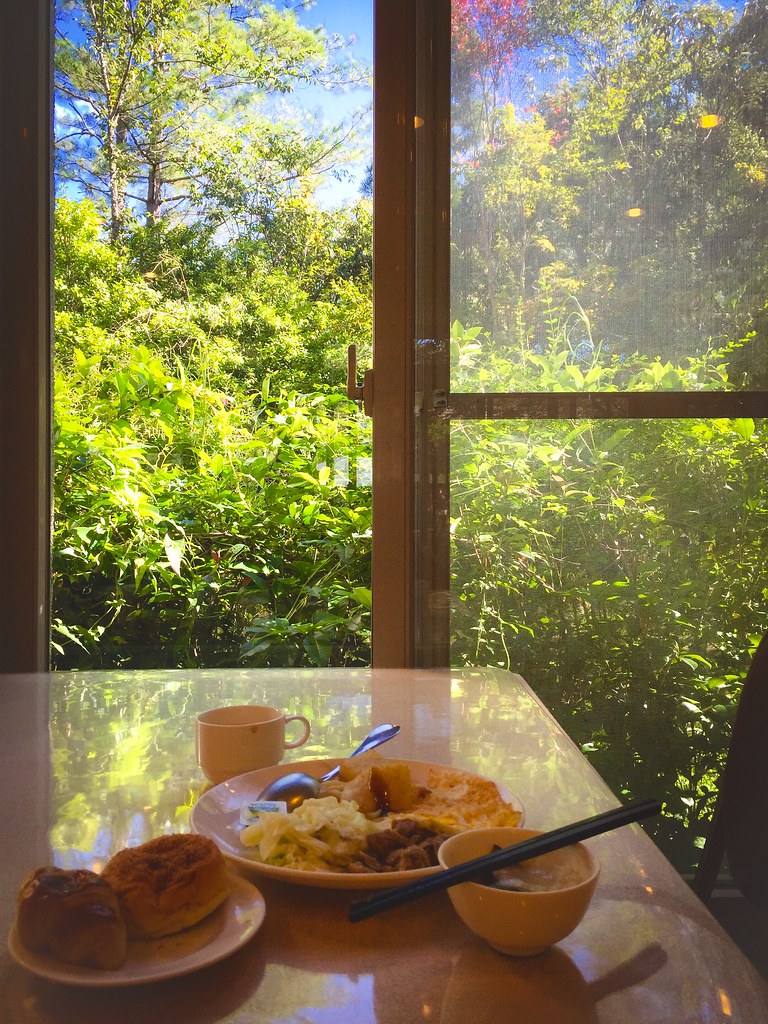 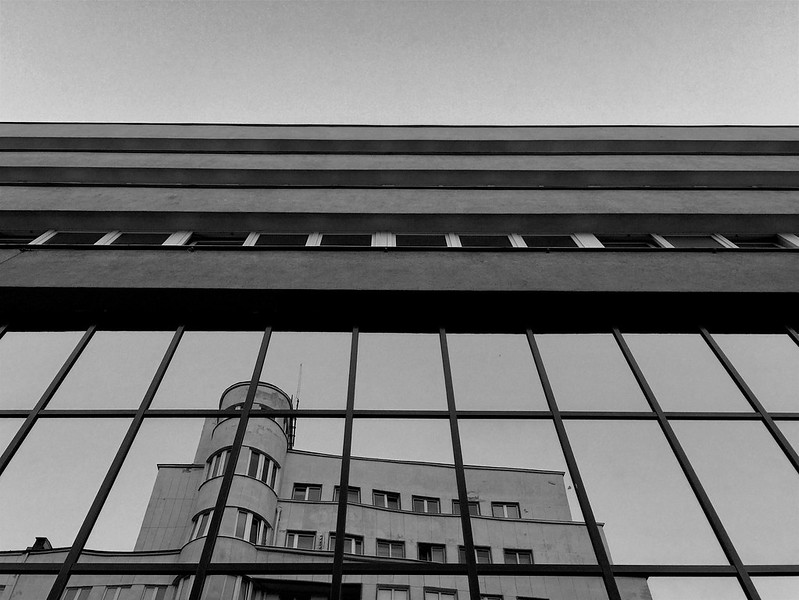 Backstory: My native city of Gdynia, Poland, abounds with beatiful modernist architecture and, naturally, I am constantly tempted, either in a dedicated session or incidentally, to capture its charm. On that September afternoon I found myself in my favourite place where two landmarks stand side by side. I have often captured each of them and when I photographed both in my frame, I usually intended to express how they represent one trend, though in a different way; the older one was completed in 1939, while the other one in 1963.
On that recent occassion I approached the subject in a new way, using the large glass facade of the younger building to reflect the representative shapes of the older one. To increase the geometrical impact, the essence of architecture, I have chosen black and white in edition. As usual, Snapseed was my basic editing tool. To achieve the desired monochrome effect I employed a combination of Pixlr and Nova touch. 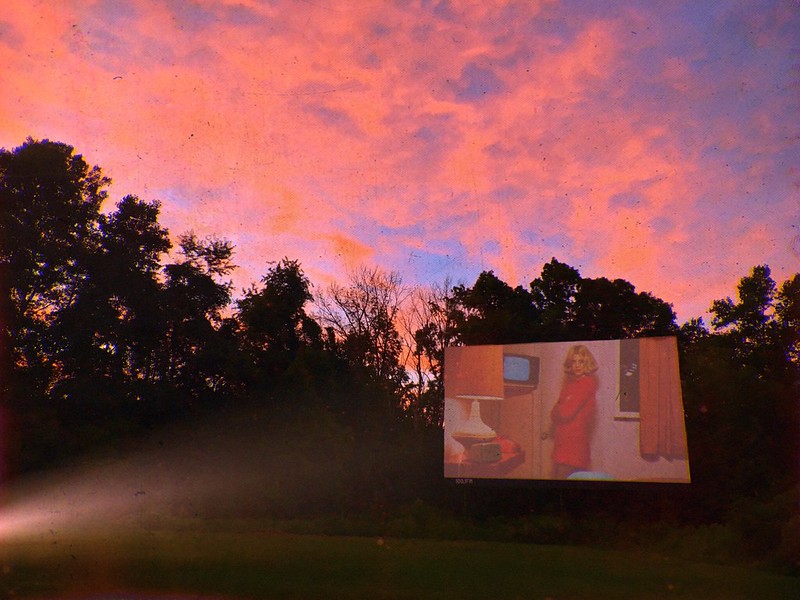 Backstory: I am lucky enough to live near one of the very few drive-in movie theaters left in the country. I took this at end of summer on one of the three screens they show double features on. Recently someone told me my work was very “Paris, Texas”, so I wanted to play off of that as I think Wim Wenders films are visually (and emotionally) moving. I wanted to blur some of the framework of screen while leaving the radio station numbers visible, I did this using Tadaa. Normally I do not use Juxtaposer all that much, but I fired it up to transpose a shot I took of my tv of a scene I think looks amazing. I wanted to keep the sky and vibe as I recalled it while sitting there in the moment, so I only slightly gave it some grain and “retro-ness” using my beloved Afterlight. It’s one of my favorite photos I’ve done recently. It puts me back there as it combines so many things I love, with a dash of longing and melancholy. 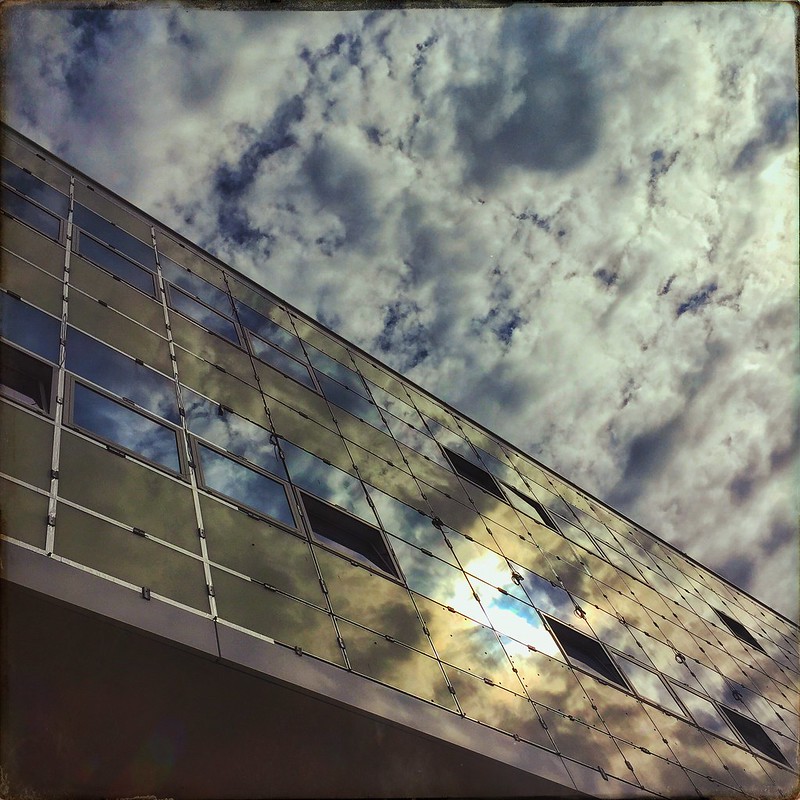 I was the shadow of the waxwing slain by Tomaso Belloni

Apps used: I shot with the default camera app on an iPhone 6 and edited with snapseed first, then with Hipstamatic (Benedict lens, Sussex film, Apollo flash).

Backstory: I knew I was going to pass by that building in Milan. Seeing the pattern of clouds and the position of the sun I started walking faster not to miss the chance for a good reflection. It’s like the building would like to be transparent, but cannot avoid adding a gloomy look to the clouds. The title is from Vladimir Nabokov’s novel “Pale Fire.” 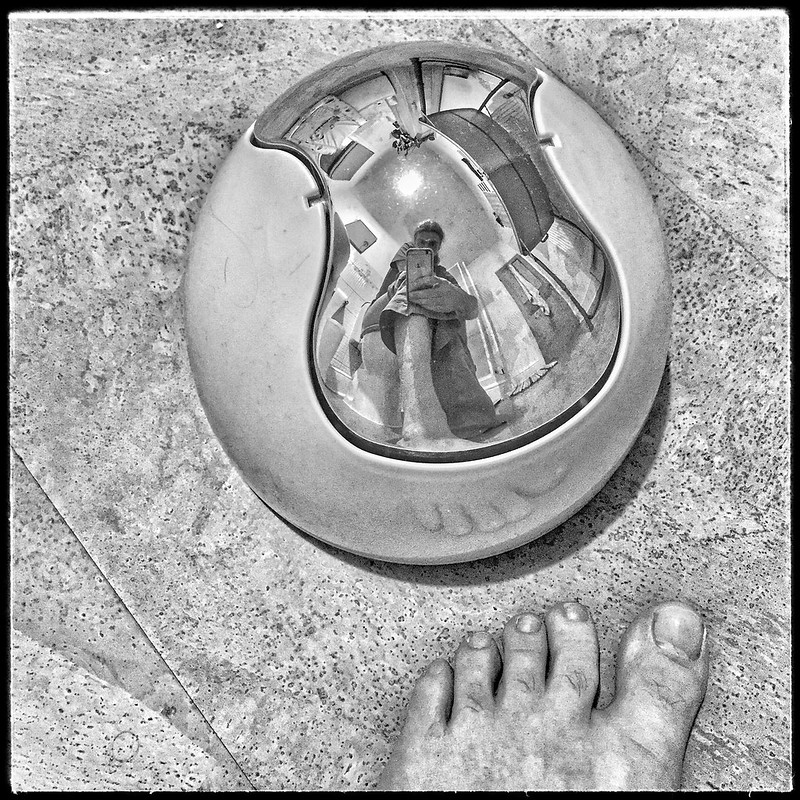