Some iPhone photographers enjoy pushing the apps beyond taking photographs, experimenting with more graphic and illustrative styles. Here’s a few of my favourite images that express a more artistic urge and a couple of images that perhaps don’t but were too good to be ignored. Thanks to Milly M for 2 of her images selected this week, including the feature image “Looking Forward to the Sunshine”. Milly M loves to experiment with the apps and I encourage you to check out her Flickr stream to see her playful images!

Some iPC News: Bob Weil is taking a well earned break for a few months from selections as his life is pretty busy right now so if anyone would like to have a seat in the Apps Uncovered selection chair for a few weeks, please give me a shout. 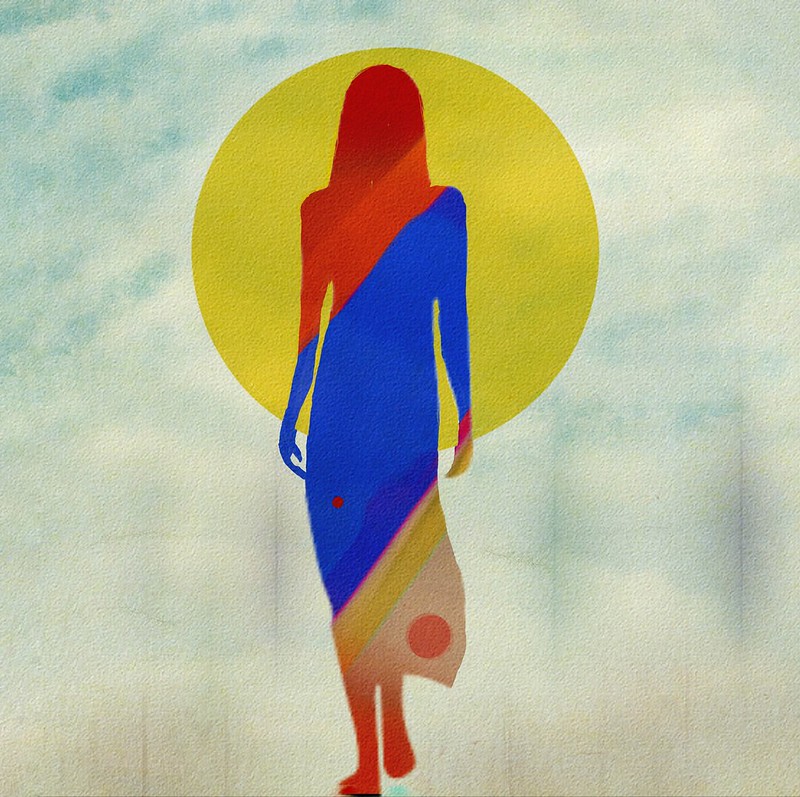 Looking Forward to the Sunshine by Milly M

Apps used: Affinity Photo and Procreate
Backstory: Although this image did take me a while to create I really enjoyed trying to get it to look like the image I had in my mind. I first created the silhouette using Affinity Photo. I then opened the silhouette image in Procreate 5.0.1. where I blended it with one of my textures and several layers of digital paintings. 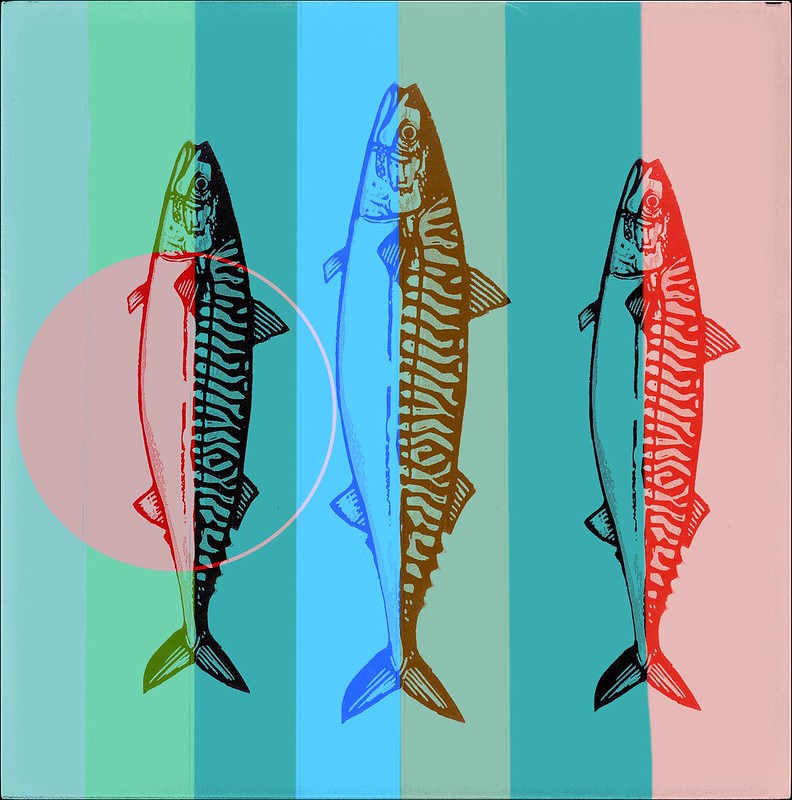 Apps used: I shot this with the iPhone camera app, but only edited it a few months later in Hipstamatic, using the Peel Apart Pack (Peale lens + Type 10 Pack film + some Triple Crown flash).
Backstory: When I look through my photo stream I do realise I’ve used fish in my images several times. This particular one was created on my iPad, an Apple Pencil and then blended them together using Procreate 5.0.1. Duplicating and changing the size of the fish, adding blocks of colour and using the blend modes until I found the colours that pleased me. 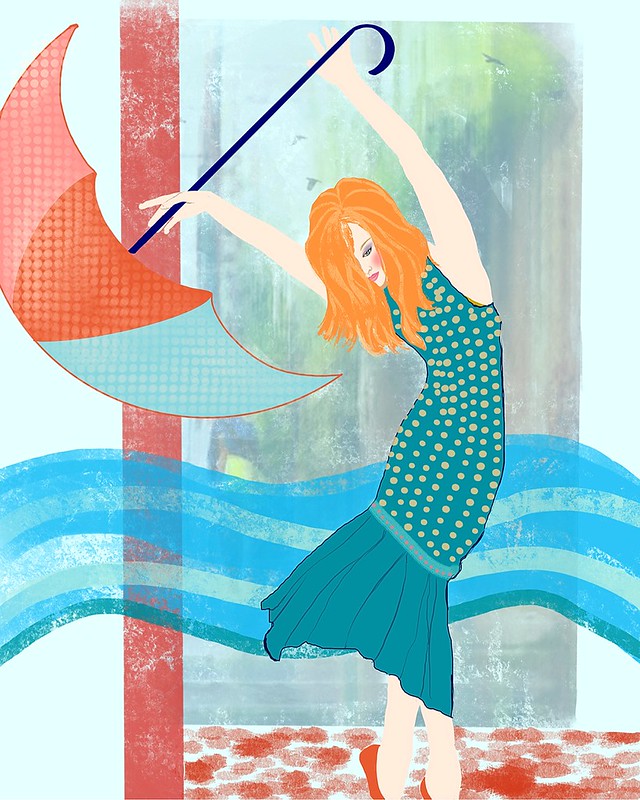 Ready for the rain? by Rita Colantonio
Apps used: Procreate and iColorama
Backstory: I have been inspired recently by the news that Vogue Italia will be using digital art to create fashion illustrations instead of live model shoots. I wanted to try my hand at creating an image that might be used for this type of imagery, very modern, somewhat abstract. I chose my color palette from a friends shower curtain and installed it in procreate app. IColorama app has silhouette brushes of figures that can be enlarged to full size. They can also be used as masks. I opened the silhouette figure in procreate and reduced opacity, then painted it on another layer. All painting, line work and textures were done in procreate app. The background panel of a rainy day was blended in from an iPhone photograph. I drew the umbrella free hand. I love the swaying curves of the figure. I could have titled this Dancing in the Rain! 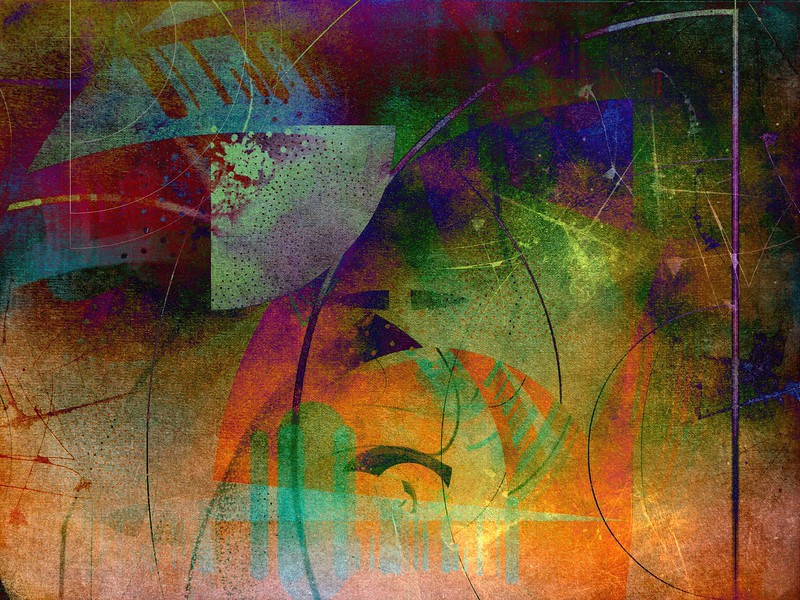 “Dreaming of the Pure Vegetable Kingdom”* by Jorge Daniel Segura *Text stolen from “Howl”, by Allen Ginsberg
Apps used: Starting from a blank canvas in Deco Sketch and treated with iColorama, Stackables and Repix 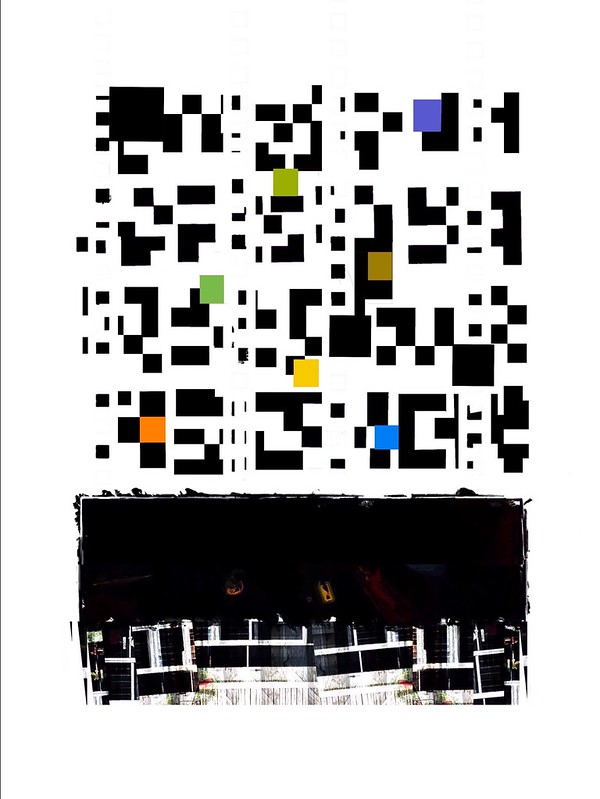 A fancy of unknowns by Clint Cline

Apps used: Apple native camera, Decim8, Snapseed, Glaze, Over, Superimpose.
Backstory: This piece is from a set of recent geometric abstract images. Giving credit where it is due, I was greatly influenced by the remarkably rhythmic black and white Rotring work of Carrie Meijer.

I set out from a blank white panel to create a deliberately noisy piece, full of urban busyness and movement that reflects the anonymous character of public space. I echoed the formalistic complexity in Carrie’s work with my own structural layering and color methods.

My upper grid is built from multiple layers of letters and characters from the “Pixel” block font found in the Over app. Through a series of masking steps I trimmed and shaped the letters into a kind of skeletal scatter pattern, then selectively applied a number of thin irregular white line masks over the composition. The randomly placed color blocks added a sense of organic humanity interacting with the space.

The lower grid is made from a photo of my house apped through Decim8 and Snapseed, and a black block with random bits of color run through Glaze. Both grids were then combined in Superimpose. 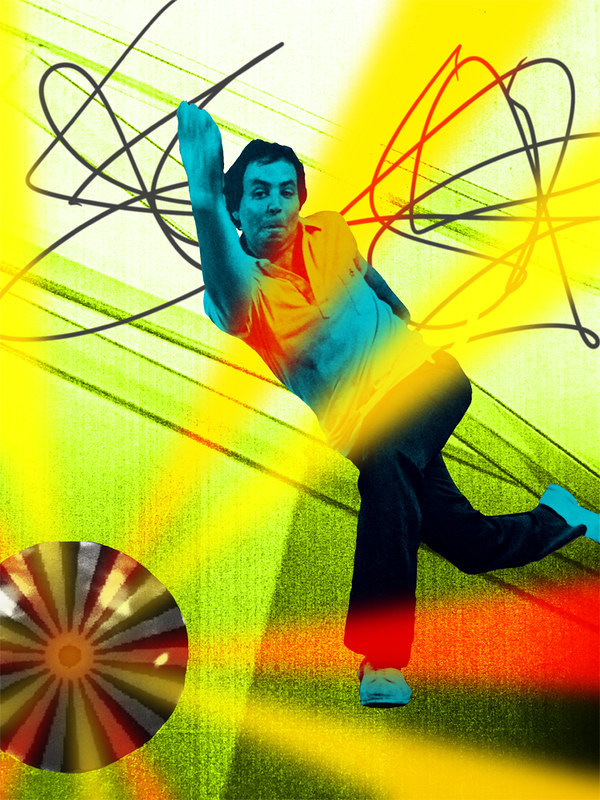 tahewitt (Tyler Hewitt)
Apps used: Snapseed and Procreate
Backstory: This is just one of those silly ideas. I do a lot of handmade and digital collage, and as a result, there’s a lot of old books of various sorts crowding my studio. I was looking through an old bowling instruction book, and snapped a photo of a bowling action shot with my iPad. It sat in my iPad’s photo album unused for a few weeks, then I got inspired and made this piece. The background is an original photo, an abstract photo of drinking straws I shot last summer. I thought the end result was goofy, but I liked it, and decided to keep the idea going by shooting all the photos of people with bowling balls I thought might work. I ended up making nine pieces, but recently uncovered yet another old sports instruction book and shot a few more, so it looks like I’ll be continuing the series. I really have no affinity for bowling, by the way, nor do I have a desire to make fun of it. The bowling balls just seemed like they wanted to become glowing orbs! 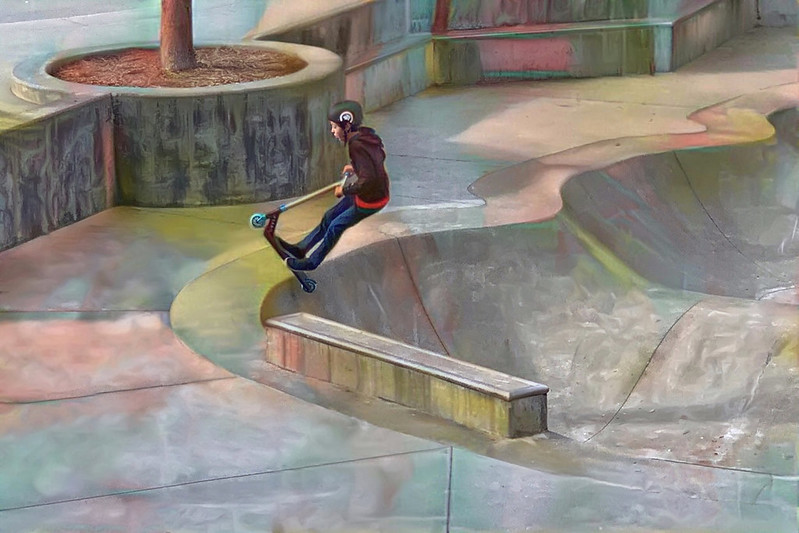 Apps used: Shot with iPhone X. Edited with Snapseed, Photoshop Fix Dreamscope and iColorama
Backstory: Once again, taking my dog for his daily walk to a local park. My images normally employ quite a bit of app dancing. I shot this with my iPhone X. There was a lot of activity at this skate park, and it was well populated mostly by teenage boys trying to outdo each other in jumping and speeding around. I started as I always do, by opening the image in Snapseed, and removing a second skateboarder in this case that cluttered the scene simplify the image and generally cleaning up and tuning the image. I can usually accomplish this with the healing feature in Snapseed. Occasionally, when there are tricky edges involved I might have to use Photoshop Fix because of the more sophisticated cloning tools. After making color and luminosity adjustments in Snapseed I try a few filters in the Dreamscope app. In this case I liked what happened when I found a filter that created crazy blocky shapes, but had beautiful pink and blue zones, but as is usually the case some of the image looks good and other parts do not look good at all.

To begin I open my corrected Snapseed image in iColorama on my iPad Pro, then add the filtered image as a new layer and test how they interact, trying out various opacities and blend modes to see how they mesh as a composite. As is usually the case, parts of the image might look very interesting, while other parts don’t work or are obscured when the layers are combined.

Noting what areas need work, I open the Dreamscope filter either in Snapseed or Photoshop Fix and clone away or heal areas that are problematic. I have spent much time retouching in my career and so I can take care of problematic areas without too much trouble. Sometimes I just paint out those areas to simplify the image.

Now . . . I try again in iColorama combining the two images. I spent time with the masking tools within iColorama, hiding certain areas partially or completely while allowing other areas of the filter to be emphasized. In this case I used the COLOR blend mode which just tinted the image with these soft colors without affecting the shapes 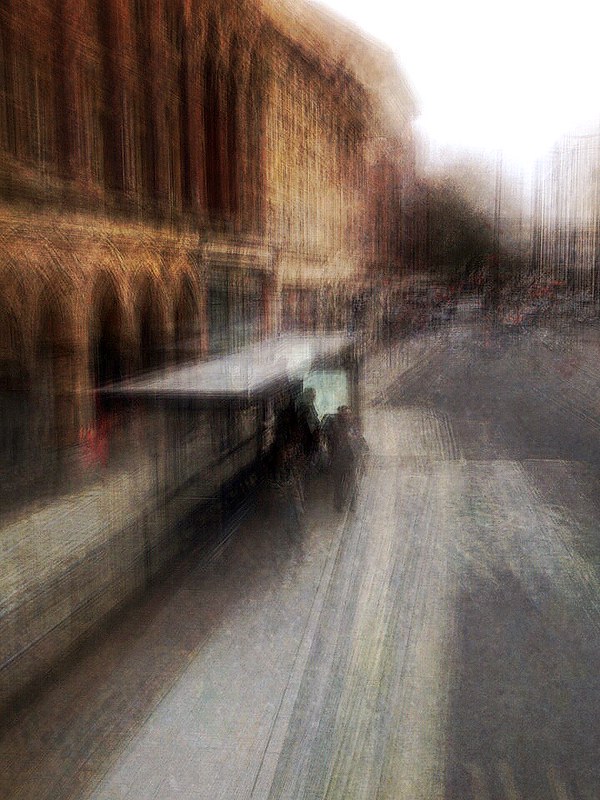 Waiting by Roy Harrop
Apps used: My photograph Waiting was taken using only Slow Shutter Cam.I made the image from the front of the top deck of a bus. 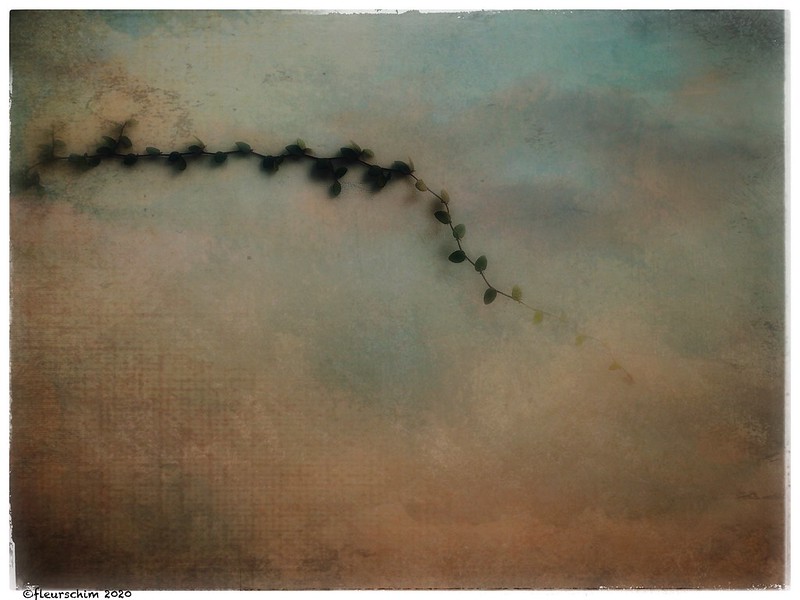 Clinging vine II by Fleur Schim Apps used: iPhone11pro with cameraplus2, Snapseed, distressedfx, iColorama and imageblender Backstory: I have always been intrigued by the look ȯf vines growing on walls. Recently, I was captivated by a scene of a single vine creeping up a stucco wall. Initially, I produced that minimalist image, but decided that I would expand and create an ethereal look using distressedfx for color and textures, along with icolorama for a painterly effect. Imageblender allowed me to mingle both, resulting in an image of a vine floating in the sky.. 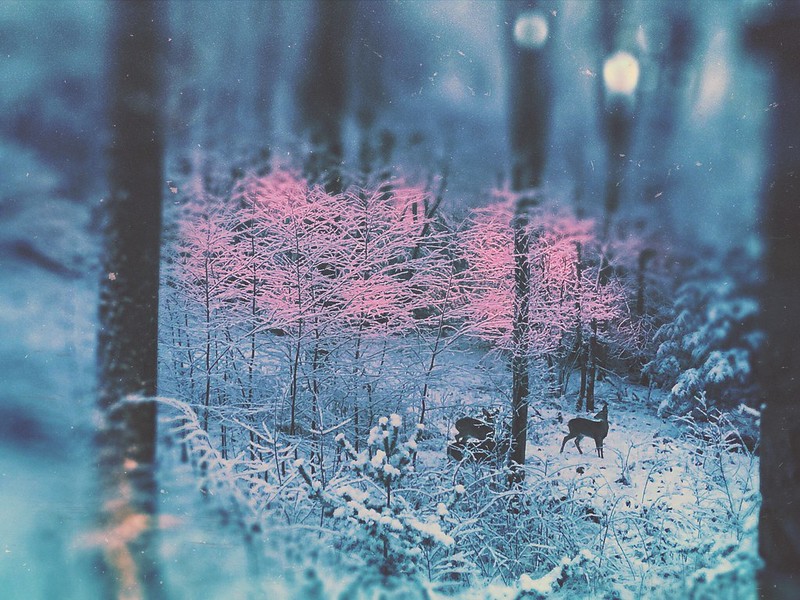 My Snow Globe by Black Eyed Suzy
Apps used: Prequel, 1967 and Nebi Film
Backstory: This photo was actually a screencap from a video I had used Prequel for. I had been taken by surprise by a snow squall and i was lucky enough to capture some winter weather as it’s been a very mild here in the Northeastern US this year. I added some grunge and bokeh using two new apps I’m liking so much…1967 and Nebi Film. This was done totally with apps I’ve only just discovered in the past year or so and I’m happy there’s a new workflow for me to get the results I wish. 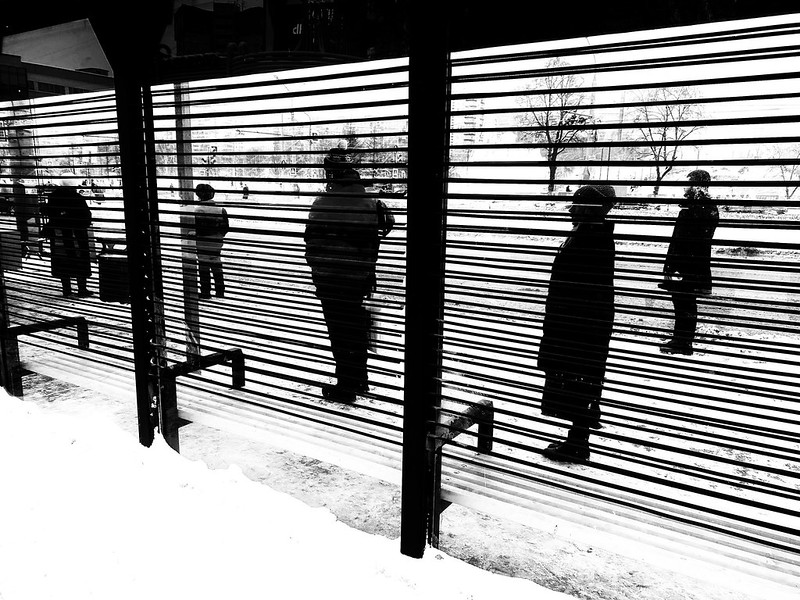 Untitled by Vladislav Niko
Apps used: The standard camera application in iPhone 11 was used. For translation to BW, the Snapseed application was used and Silhouette Style.
Backstory: Passing by a bus stop, I noticed an interesting combination of horizontal lines of a stop construction and vertical lines of people waiting for their transport. A black-and-white filter emphasized what is worth paying attention to – on lines and intersections of lines. 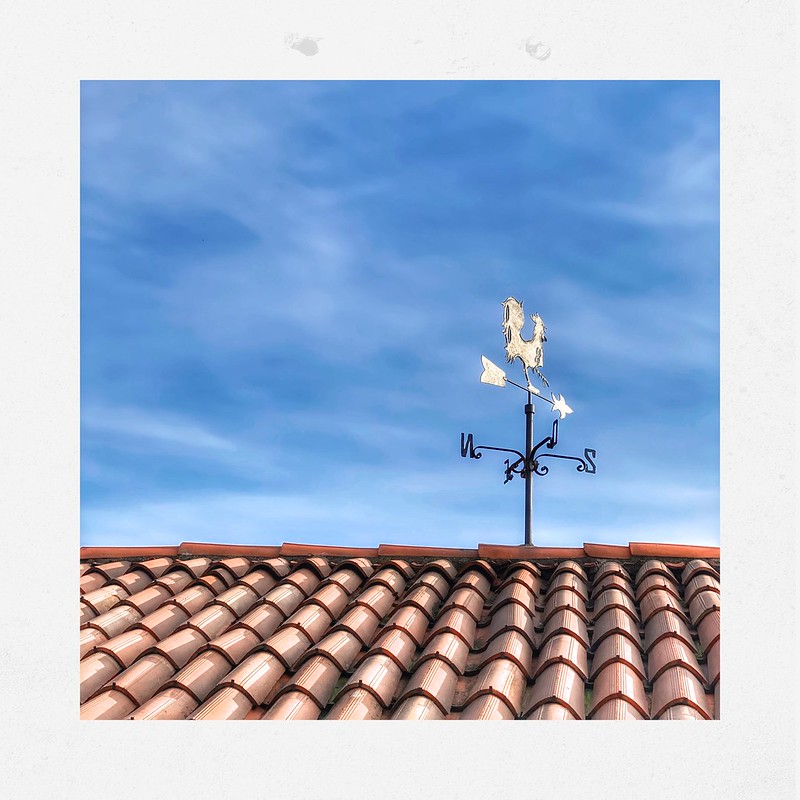 Apps used: I shot with the default camera app on an iPhone 11pro max using the zoom camera, then edited with Snapseed and Hipstamatic (Markus NSW Lens and Bream Film).
Backstory: A weathercock on top of a tiled roof with just the right sun direction, veiled sky and perfectly accessible for a good composition. Who can resist that? A great catch for a cold Sunday afternoon in a scenic village near home.

Apps used: Straight out of the iPhone.