iPhoneography Central picks around 12 iPhone images every week to showcase the latest talent experimentation, shooting and editing with the iPhone and iPad.

If you’d like a chance to be featured, please join our iPhoneographyCentral Flickr group and submit your images.

Thanks to Jan Uiterwijk for this week’s illustration style, featured image “Polder in Summer”. Scroll down to see how it was created using a number of apps to both collage the images together and apply the overall style.

If you’d like a chance to be featured in this weekly showcase,  please join our Flickr group. where you’ll find all the information on how to submit your work.

Thank you all for contributing your wonderful images and we look forward to discovering the stories and techniques behind them.

If you have any questions regarding this feature, my online classes or any editing topics you’d like to see me write about and illustrate, please email me at nicki@iPhoneographyCentral.com

Latest iPhone & iPad mobile art classes 2020…
If you’d like to learn more about creating art from photos on an iPhone or iPad using apps like Snapseed, iColorama, Procreate and Superimpose X you might like my new iPhone art video classes, Armchair Art Adventures.

Apps used: This image is made with an Iphone 11 in which I used the ProCamera app.Then for finetuning there is on the IpadPro 2018 always the Snapseed app. to make it an image wich is as I like it, just photographical speaking.
Then I start to make it mine, graphical speaking; Here I used the Prisma app. to style it. I needed to add some flowers and used the Pixlr app. to do so.
To finish the image I used the Grain & dust and the Textures filter in the Carbon app.

Backstory: The intention with my work is to show things I care and to comment.
It’s not just to show how nice things are!
This image should express my worries about the lack of flowers in nature in this country. To do something about it I decided to add the flowers to the landscape meself here. 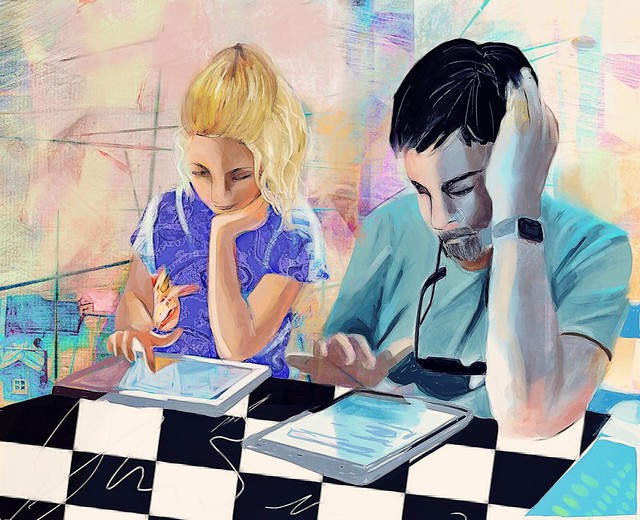 This is an iphonexsmax photograph which I took last summer. It shows my husband and our granddaughter lost in their virtual world but still connected physically. It’s interesting how their postures and their fingering on the tablets are so similar. The light is coming from a window behind them and also from their tablets (their virtual world). I chose to paint this in Procreate app, using colors that were in the original. The background is blended from an abstract FotoDa image but contains elements of perhaps a virtual place occupying their minds. I chose the black and white graphic base both for contrast and a strong leading foreground, which leads to this artificial environment they are submerged in.
I thought this image was very timely and sadly a comment on this new world in which we find ourselves.

Thank you for including my painterly image in Apps Uncovered! I appreciate it!
Rita

Untitled by Louise Whiting
Apps used & Backstory: This image is a self portrait processed using a foliage texture and film grain overlay in Procreate and then converted to black and white in Snapseed.

Au revoir by pahamel-mtl (p.a. hamel)
Apps used: SlowShutter, IColorama, Distressed FX, SuperimposeX.
Backstory: Inspired by The Beatles’ song “She’s leaving home”, this photomontage reflects the contrasting effect conveyed in the song between the very gentle melody (harp and chamber music) and its harsh topic (emancipation from the family nest). The isolated house, bathing in a bright sun, seems at odds with the character, which is seen from behind, as she soberly looks back one last time at the object of her decision; for better or for worse, she will have no regrets. The background was worked with IColorama and Distressed FX. The character, created using SlowShutter, was then integrated into the landscape using Superimpose X.

SUM by Kachouro (aka Brid.Bernstein)
Apps used: The editing of the picture was very cautious: I took the picture with an iPhone and only cropped it with Snapseed and corrected the perspective. With the Instagram filter “Amaro” I emphasized the center a little bit with brightness and added some blue tint to the green of the leaves.
Backstory: The picture shows a gravestone on a beautiful mountain cemetery in the middle of our town. The inscription reads “SUM” – Latin: “I am”. The two bars of the cross appear like the cardinal points on a compass, the paths are open in all directions.

The “SUM” asks where our dearest friend is now (and states, that she’s still here). During the Corona Pandemic her brain tumor treatment (with an initial good prognosis) slipped into an abyss. From one day to the next, she was banned from visiting the clinic due to the corona pandemic. Telephone calls were no longer possible because the speech centre was affected by the tumor. There were many rules and prohibitions, no communication was possible. When visiting was allowed again, she had died. The worst nightmare for her, for us.

Sure, at some point the corona crisis will pass. For many, life goes on. But without the loved ones we’ve lost. And they had to leave without the support of their friends, because there was no protective clothing and no concepts ow to enable communication in hospitals and nursing homes in times of pandemic. How can you ever bear it. We can never turn back time.

“SUM”: Where is she now? How can those of us who are still here live on?

Summer in the City by Karen axelrad (karenaxe)
Apps used: Imaengine, iColorama
Backstory: I took this photo sitting at an outdoor cafe in Berlin. The original was rather nondescript, but I wanted something to experiment on with new techniques. I cropped it and then processed it in the vector app Imaengine. For those of you who don’t know the difference between a pixel graphic and a vector graphic, photos are made up of thousands of pixels and cannot be enlarged much beyond their original size. A vector graphic is made up of lines and can be enlarged infinitely without losing quality, but a vector graphic has less colors and sharp demarcations between colors. I wanted to use this quality to give the photo a more abstract, painterly feeling. In iColorama I adjusted the colors and masked the shirt to reveal the original pattern which had become blurry.
I got the painterly result I was looking for, and due to strict data laws here, hopefully the man isn’t too recognizable now.

Here we are (Kingston, Tasmania) by Keith Midson
Apps used: I used Photoshop Express for this one, using the red pop-colour filter along with some straightening and cropping to get the perspective I was after.
Backstory: II was going to the shop and this scene is just behind the main shopping centre, almost abandoned. I’ve never really noticed it before and it looked so abandoned. The red of the autoteller machine really caught my eye so I knew there was a photograph and a story to be told there.

Apps used: I shot with the default camera app on an iPhone 11Pro Max and edited in Snapseed.

Backstory: The covered sidewalks of the center of Turin always offer possibilities. This one was quite crowded, but you just need to wait for an opportunity. The mirror shapes on the windows just called for a shot and the reflection suggested a surreal shopping environment.