It seems that everyone is out and about photographing their native flowers, the theme of which produced some of the best images in the iPC Flickr group this week with Sergiy Beliayev’s delightful “Delicate Petals” stealing the lead spot this week. Congratulations Sergiy!

Thank you to all of you who submit your work to our Flickr group which includes this week’s top picks from tmbx, pitysing, rlonpine, Meri Walker, Caren Drysdale, Jorge Daniel Segura and Kathy Clay.

ANOTHER CHANCE TO WIN a Pocket Tripod this month…

…so don’t miss out on May’s iPC giveaway, the fantastic little wallet sized tripod, perfect for keeping that shot steady and great for long exposures and self portraits!

Simply sign up to iPhoneographyCentral, for a chance to win. It’s that easy!..and if you’re already signed up, there’s nothing to do; you’ll be entered into the draw this month and every month for the rest of this year! 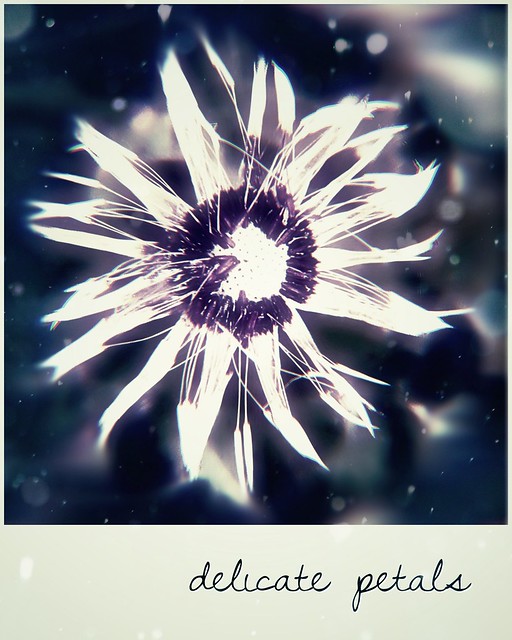 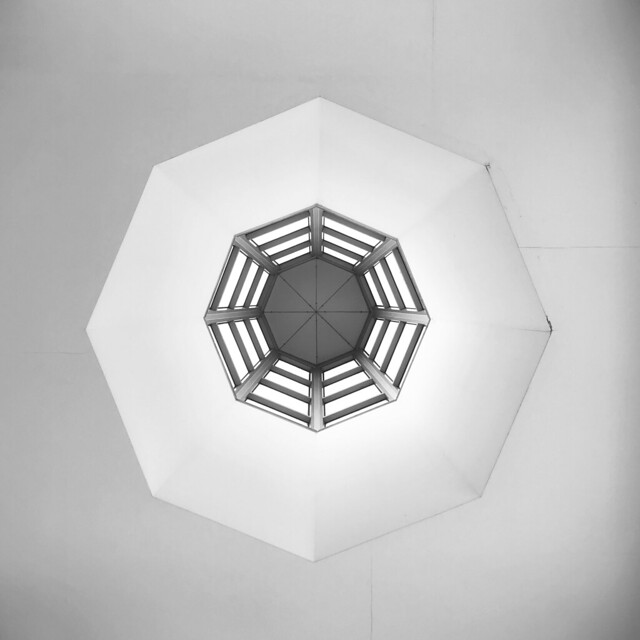 “Off to a good start” by tmbx (Tomaso Belloni)
App used: I shot with an iPhone 7plus and standard camera app, then edited in Snapseed.
Backstory: Whenever I visit that University in Turkey I take a lot of photos, the architecture is very interesting. This is one of the first shots I took last week. Not many people look up to the ceiling, but if you do you have a two-dimensional view of the hollow ornamental tower seen from below and that gives a very dfferent geometric feeling. 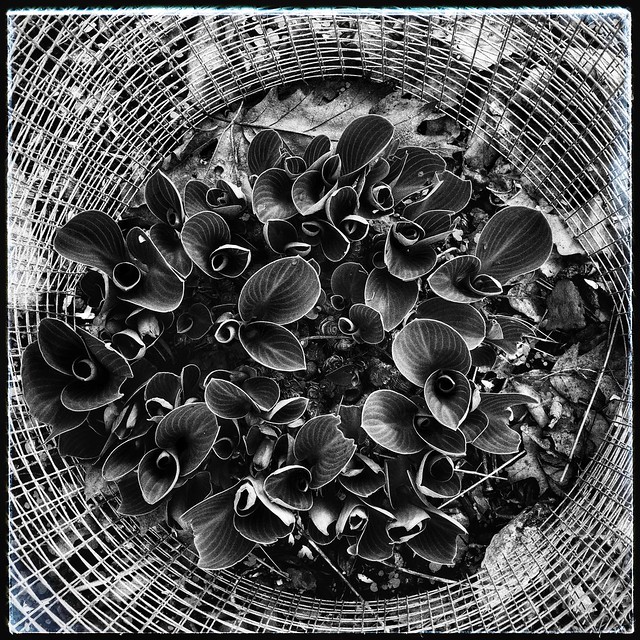 Apps Used: Only used one app, Snapseed, which had all of the tools I needed to process my photo including black/white, HD, vignette, portrait, frames.

Backstory: I’ve been landscaping my front yard for the last several years and have my iPhone with me constantly. It’s my habit to document my work and many of the plants I choose to use and also the plants that are native to my area. The hosta I photographed had just started to come out of it’s winter rest and I had been keeping an eye on it because the rabbits in my yard have preferences for certain types and I’m sure they’re convinced they were planted for their convenience.

All was going well until this particular morning when I noticed that there were bites taken from some of the leaves at the outer edges. Quickly, I fashioned wire that was handy into a round shape to fit and popped it over the top of the hosta.

When I was finished, I looked at my work from the top to check the fit and immediately realized it’d make a perfect square composition in black and white. The shape of the wire echoed the shape of the plant and after I made the shot and was anxious to take it to the next step. It needed good contrast and brightness for the wire to echo the brightness at the edges of the hosta. The Snapseed tools provided just what I needed.

It was a good day. Hosta protected. Hosta portrait before it was eaten!!! 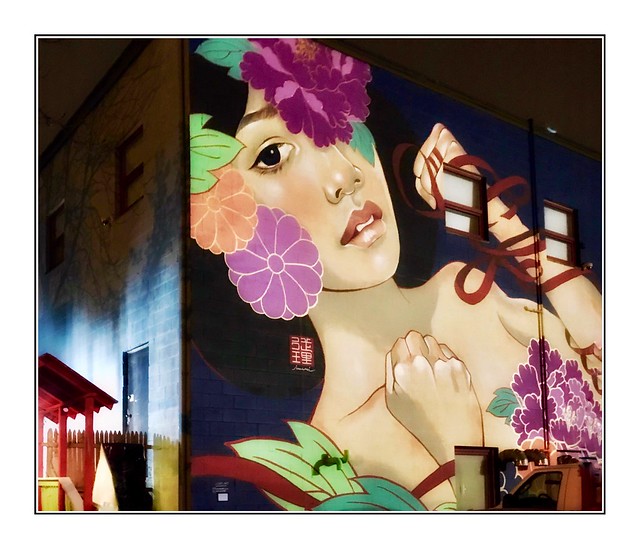 Apps used: This photo used Snapseed for most edits, such as adjusting the perspective, color and framing. I also used Pixelmator to make some touch ups (the app has some very handy “retouch” tools)..

This outdoor mural is hard to miss given its large size and vibrant colors. It would have been easy to fill the entire photo with the mural, but I wanted to keep it in context by including more of the building in the frame.

The artist (Juuri) entitled this “Life triumphs over death” and it shows a girl in a fighting pose with “life” spelled out in the ribbon around her wrist. I love the colors and appreciate her work, and also the efforts the community organization that made this possible. 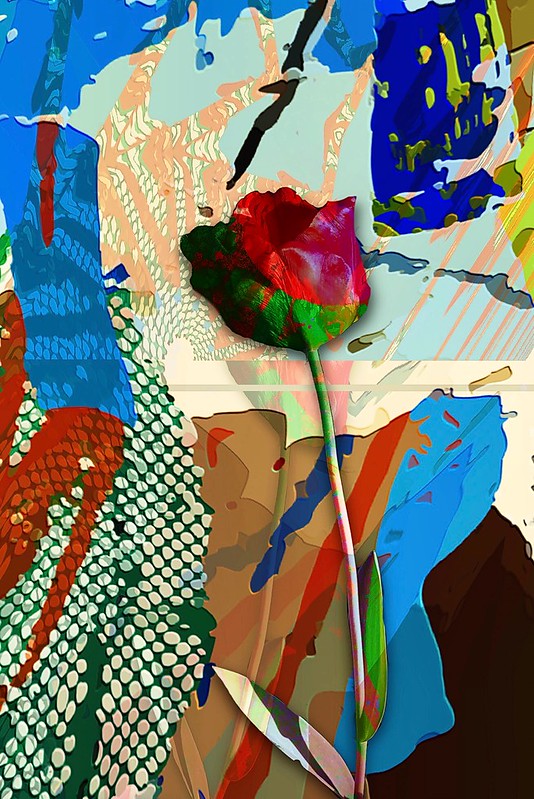 “The Story of My Life” by Meri Walker
Apps used: Camera+, iMaengine, iColoramaS, SuperimposeX, Decim8, LightBrush, 2x
Backstory: I’ve been home about a month now from a three-week-trip that included me 1) offering an important artist talk about my way of thinking about iPhoneograph; 2) teaching a one-day workshop and a 5-day residential course on Cape Cod; 3) really enjoying several days of camaraderie, playing and talking with other committed mobile image-makers; 5) and connecting with family in Boston.
So, since I’ve been back home in small-town southern Oregon, I’ve had a lot of rich experiences to incorporate. More than I could possibly write about. Deeper and more complicated than a straight photo-album would do justice. As it turned out, I started making a self-portrait with my iPhone 8+ one evening and realized that was the best way to do it.
I had made some fresh photographic shots of myself, but when I sat down to work that night, I found myself completely uninterested in using any fresh photographic data. Oh. photographer’s block. Not actually. I don’t get “blocks” like that since I’ve been working with an iPhone.
What I did was use my ritualistic camera roll scrolling process, hunting for some other subject to stand in for me, iconically. For me, it’s pure play, making images on my iPhone. Why not start there?
Since the tulips were in full bloom when I got back to Oregon, my camera roll was full of delicious shots made in my neighbors’ gardens. What I ended up settling on, though, was a partially painted masked tulip I had exported to my camera roll when I finished another image. Perfect! A half-and-half-tulip! For 10 years, I have just kept moving back and forth between editing straight-up mobile photographs and taking pieces of photographic images and turning them, one way or another, into digital paintings.
With my iconic standin in hand, I mused for quite awhile about what kind of background the half-photographic-half-digitally-painted tulip needed. It was going to have to have a lot of different forms and textures to stand for all the experiences and feelings rolling around in my mind and heart.
A lot of time went by and I couldn’t see anything in my camera roll working. Instead, I went searching in my office for a crazy paper collage I’d made a few days before by rapidly pasting random papers over one another with no purpose in mind. Again, perfect – a bunch of shapes and textures and colors. I photographed the collage using Camera+ to get a nice high res file, and then took the photo into iMaengine to simplify colors and flatten the forms so they would fit together with the flattened leaf forms in the half-and-half-tulip.
I opened SuperimposeX to start compositing and, as I worked, the compositional process got unruly and frustrating. Finally I realized I could crop the collage (duh!) and just work with part of it. I took the part into iColoramaS (and yes, I made this image entirely on my iPhone) and tuned it to emphasize the textures and pieces and moved them around a bit using the warp function.  Then I took the same part back into SuperimposeX and worked the tulip into it.
I was almost satisfied. I certainly learned a lot about my feelings working with the various shapes in the background image. But the composition was just too “neat” at that point. I sat with it through a beer and some time rubbing Blaze’s ears.
Ahhh! Insight!!  One of my favorite ways to stir up a digital composition a bit without sacrificing its fundamental construction is to add noise carefully with Decim8. I tried several strategies and settled on one that I then took into LIghtbrush to selectively emphasize some elements and de-emphasize others. Finally, since I’d cropped the background pretty severely, I took the whole image into 2X to size it up enough to allow me to print it at a size larger than 5×7.
I hope I haven’t bored you. It’s no short story to recount how you tried one night to tell the story of your life with one image you made in your iPhone. :+) 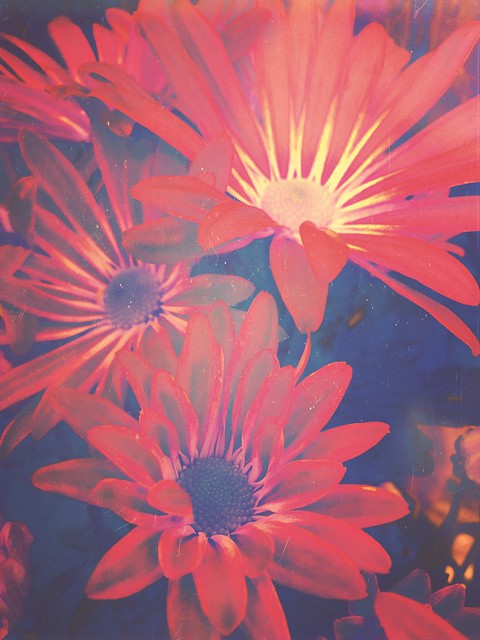 App used: Snapseed, IColorama
Backstory: I took a photo of an arrangement of flowers in a shop and edited it using the Mextures app. Unfortunately, I can’t recall the Formula that I used. However, I can say that I chose the final edit because I liked that it made the image start to look like a negative of the original photo. 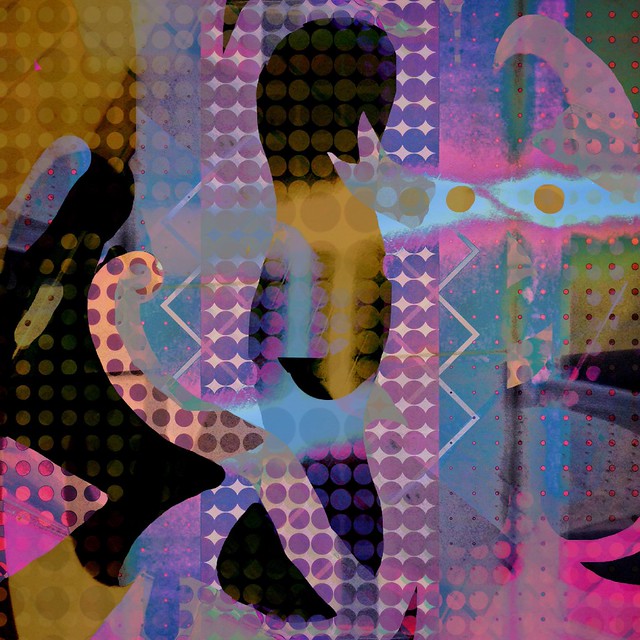 App used: iColorama, image Blender, Stackables and Decosketch
Backstory: Multilayered and masked in icolorama, image blender and stackables, starting from a blank canvas in deco sketch and adding at some point a couple of dot patterns in iColorama. I find so delightful playing with shapes and colors as in handcut collages, with the difference being you can add an endless number of layers. 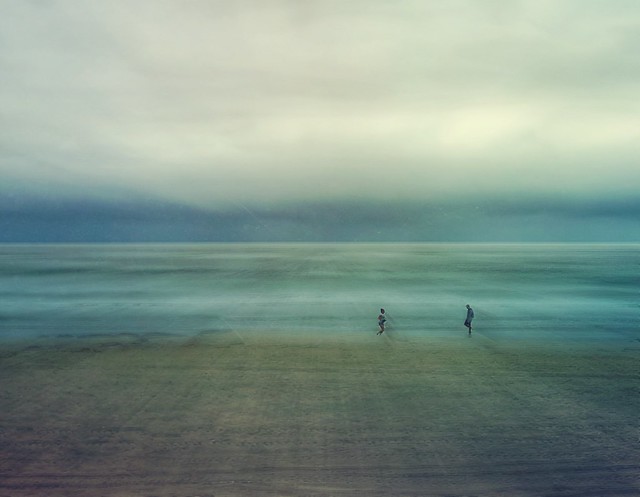 App used: Snapseed, IColorama
Backstory: I took the photo at Pacific Beach in San Diego while meeting some friends for lunch. It was in the morning on a weekday. The beach was quiet and I liked the vastness and mood of the scene.