Welcome to the this week’s Apps Uncovered. My birthday (thank you for all the lovely birthday wishes), my sister’s birthday and Father’s day over the last four days have left me with scant time for putting Apps Uncovered together this week so please forgive me for jumping straight in with thanking the following artists for our great showcase of iPhoneography talent this week: 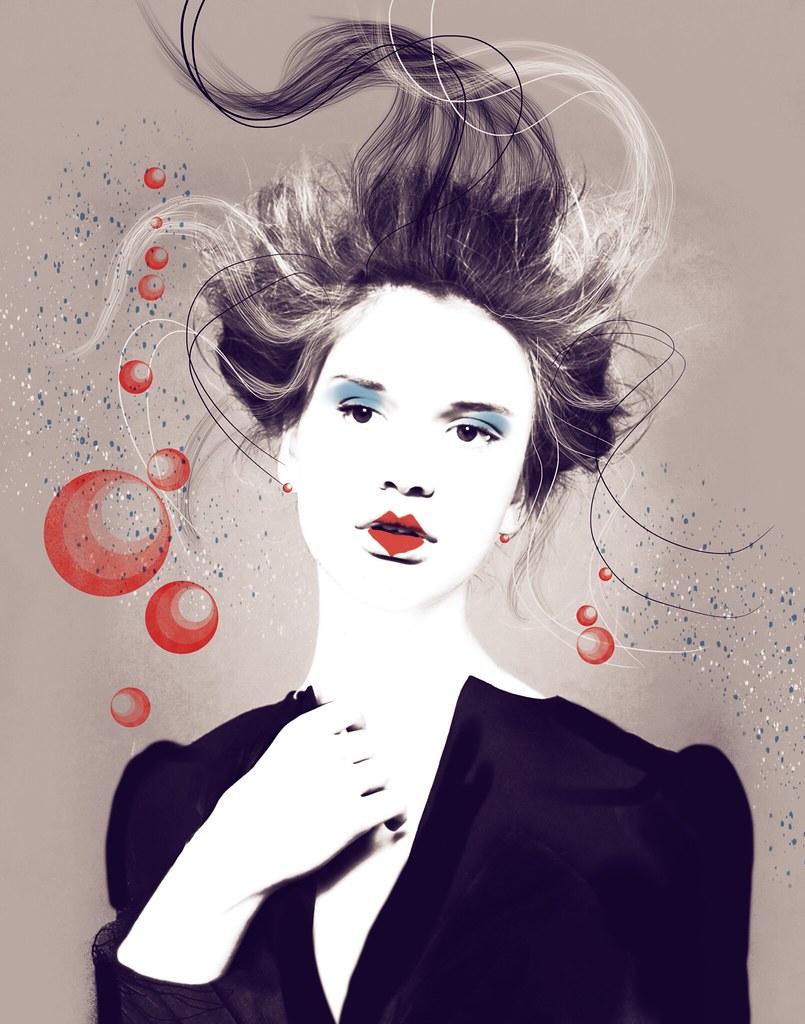 Apps used: ProCamera, iColorama & Procreate using an iPad Pro with Apple Pencil.
Backstory:I used 2 different photos for the figure which were blended together using iColorama. I pushed contrast in the resulting persona for simplification & drama. I love adding or painting & drawing into some of my photomanipulations which I did here using the Procreate App for the upswept hair to give it a whimsical, simplified linear effect. The red lips, garish blue eyeshadow, & clownish red bubble-effects were then added on for more drama & to exploit the persona of the figure which I couldn’t resist naming Drama Queen.

Apps used: iPhone6+, Hipstamatic, Union, iColorama and Snapseed   https://www.flickr.com/photos/71863847@N07/27471155962/ Apps used: Slowshuttercam,TouchRetouch, Snapped, Artstudio and Stackables. Backstory: My favorite pastime is to walk at the edge of the Bay of Arcachon and to photograph people.  I above all like using the application SlowShutter which allows me to give an painting effect to my images.  That day, the light was ideal to make this kind of photo.  The post-treatment was to smooth irregularities with TouchRetouch, Snapseed to resize the image and to give a vintage effect I used artstudio to improve the silhouette of my character. I finalized tones with stackables. 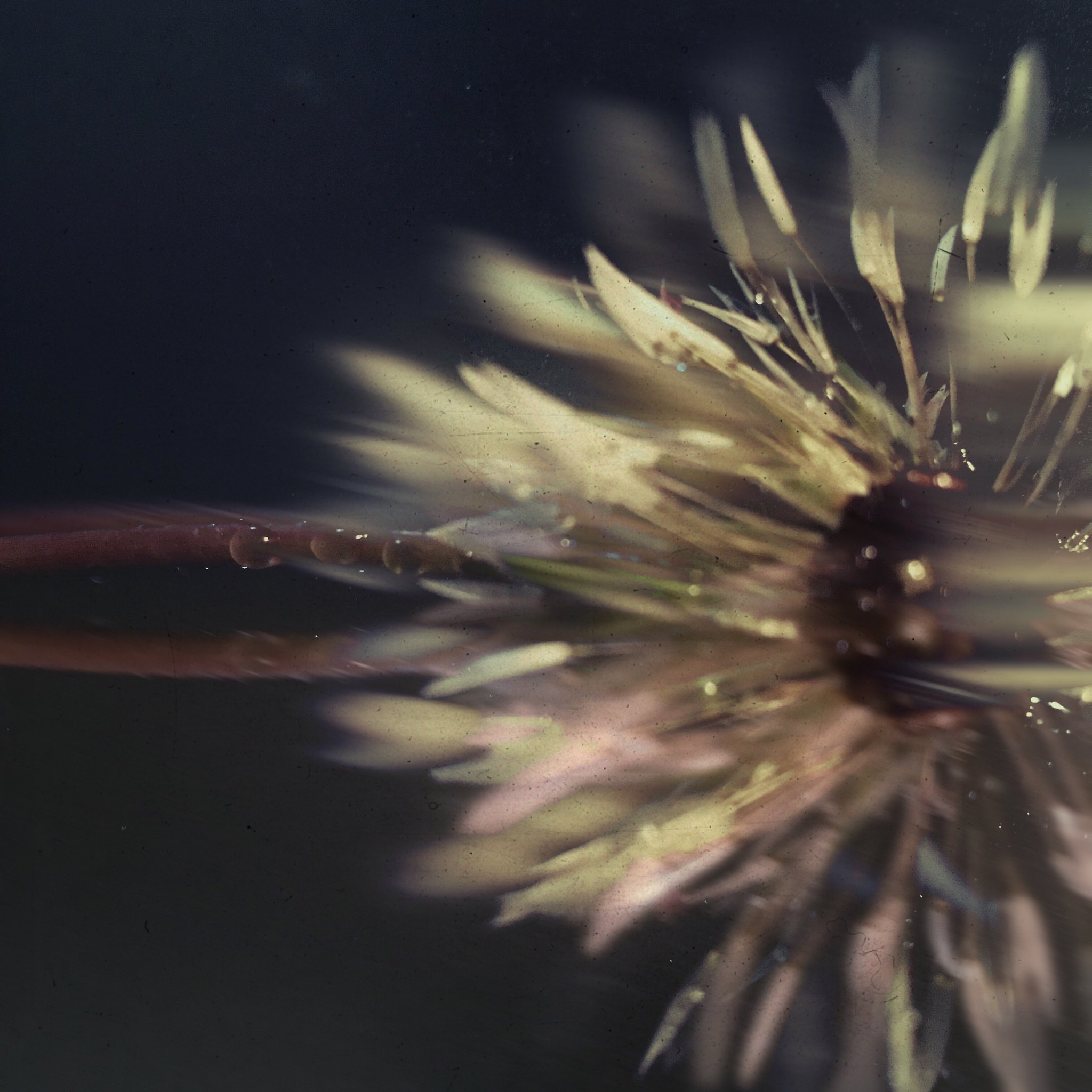 Apps used: Snapseed to make minimal adjustments to brightness and contrast and to convert the image to black & white.
Backstory: This photo was really very simple. I was snapping dandelions at start of a rainstorm and I laid one against my car hood. I just used the new fashion combo in Hipstamatic which is one of my favorites of their recent releases. I liked it took on almost a ghostlike appearance, while retaining the droplets that to me were best part of the shot. I didn’t think it needed any further editing. It’s a nice memento of an unusually rainy spring here. 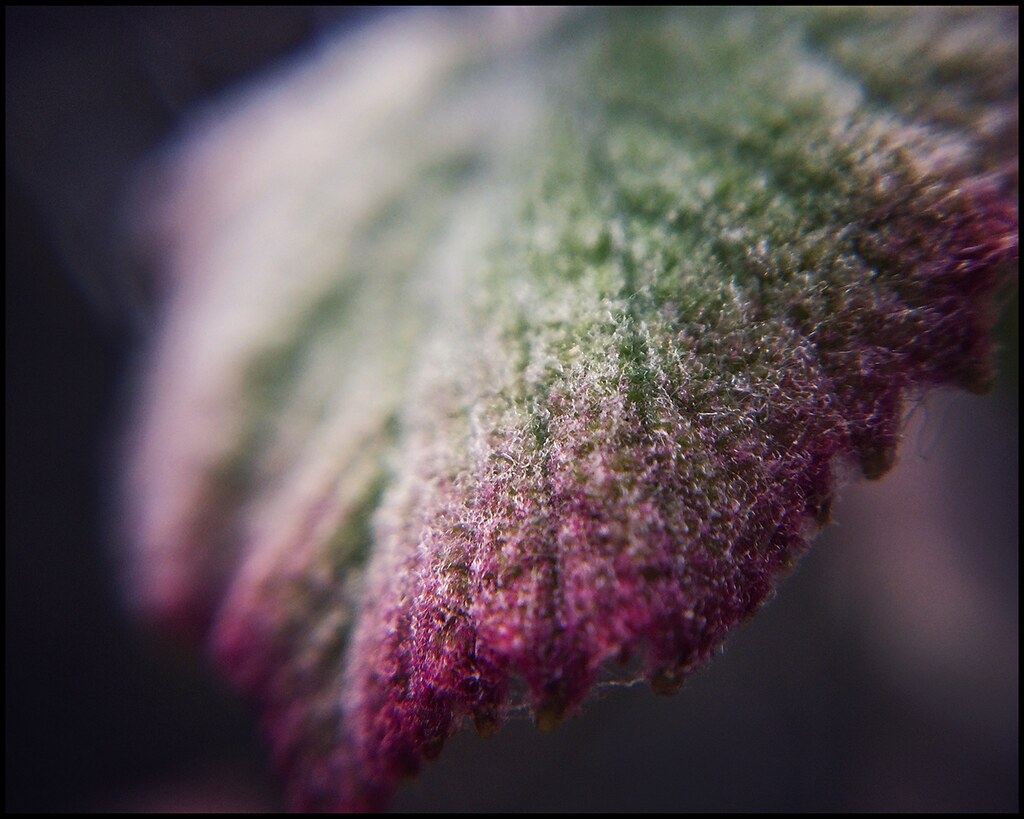 Apps used: A young grape leaf captured a few weeks ago with iPhone and Olloclip Macro Lens. Edited on the iPad in Snapseed. Backstory: The dappled morning light accentuated the colors and texture of the newly unfurled leaf 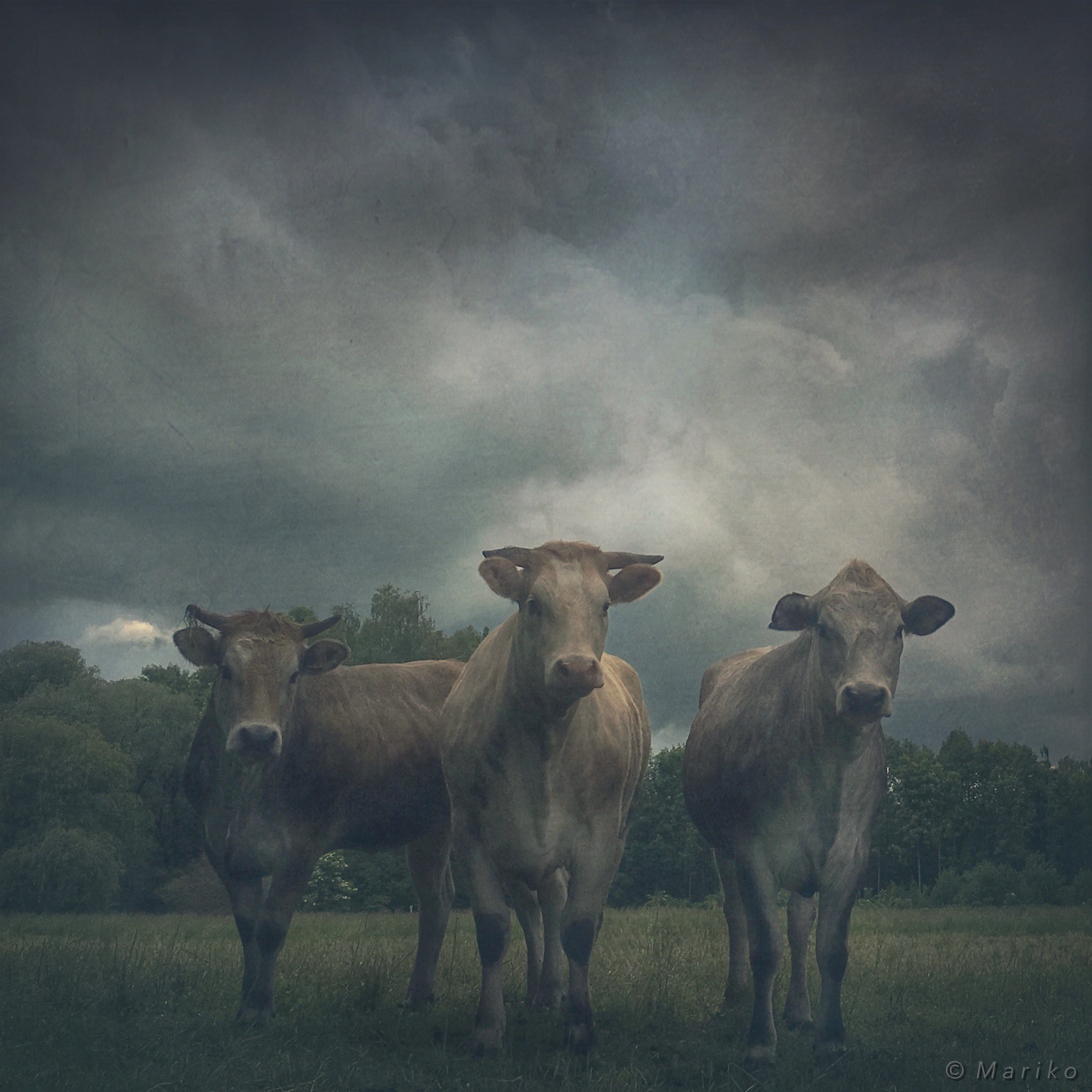 Apps used: Taken with Hipstamatic (Jimmy/Blanko Freedom13/JollyRainbo2X), TouchRetouch to remove some cows in the background, edited with PhotoToaster and Alayer (Bouquet effect/Dali texture).
Backstory: Here in Germany summer is taking its time to arrive this year. It rains a lot and it’s very much like the tropics: in the morning heap clouds form and in the afternoon they turn into heavy thunderstorms. Anyhow, those clouds make photographing interesting for me. On that day I was exploring my vicinity and came across these cows. It was a rather lonely place so I think they were not accustomed to visitors. When they approached me I was not feeling comfortable as I was not sure if they were only curious or angry. But they stood there looking at me with the heavy clouds in the background adding some drama so I had no choice but to take some shots and leave them in peace quickly.

Apps used: I used an iPhone 6s plus with a tele lens attached and Procamera. I imported the image into Vsco and used the B4 preset ;I cropped the photo to square and made any adjustments to the image within the app. Backstory: I often take walks at a local fairgrounds. It is usually unpopulated and big enough to provide some exercise. However, one morning there was a group of people and their farm animals gathered under one of the many large pavilions. I went over,naturally hoping to capture some images. The people were,for the most part, farmers who had brought their finest livestock to the grounds in order to enter them into competitions. These gathering are usually a family affair, since preparing and managing the animals takes al lot of work. I saw these two boys, ( I assumed they were brothers} sitting at bench table looking at something on the older boy’s phone. They seemed truly immersed in this activity, even though all around them were people working and pigs, sheep and cattle all needing attention. I took several images of the boys, but this one was the best; the younger boy looked up at me, not sure exactly what I was doing. He seemed to have some idea that I may be photographing him but couldn’t make up his mind. At any rate, he didn’t seem that happy with the idea(he later covered his head with his shirt) But I continued to shoot trying to make what I was doing seem innocuous. One learns many approaches when shooting candid or street shots. Luck, as in all photography, favors the prepared ( and those who practice a great deal).

Apps used: This was shot with the native iPhone 5c camera and it’s SOOC (straight out of camera), no editing. Backstory: I was on my way to work and noticed how pretty the shadows were this particular morning. I loved the distressed look of the steps, too, and the colour. It reminded me a lot of New Orleans and the shadow play and bright colours I’d always gravitate to.

Apps used: iColorama, Brushstroke and Snapseed.
Backstory: The image expresses my struggle with the physical and emotional realms of human existence. 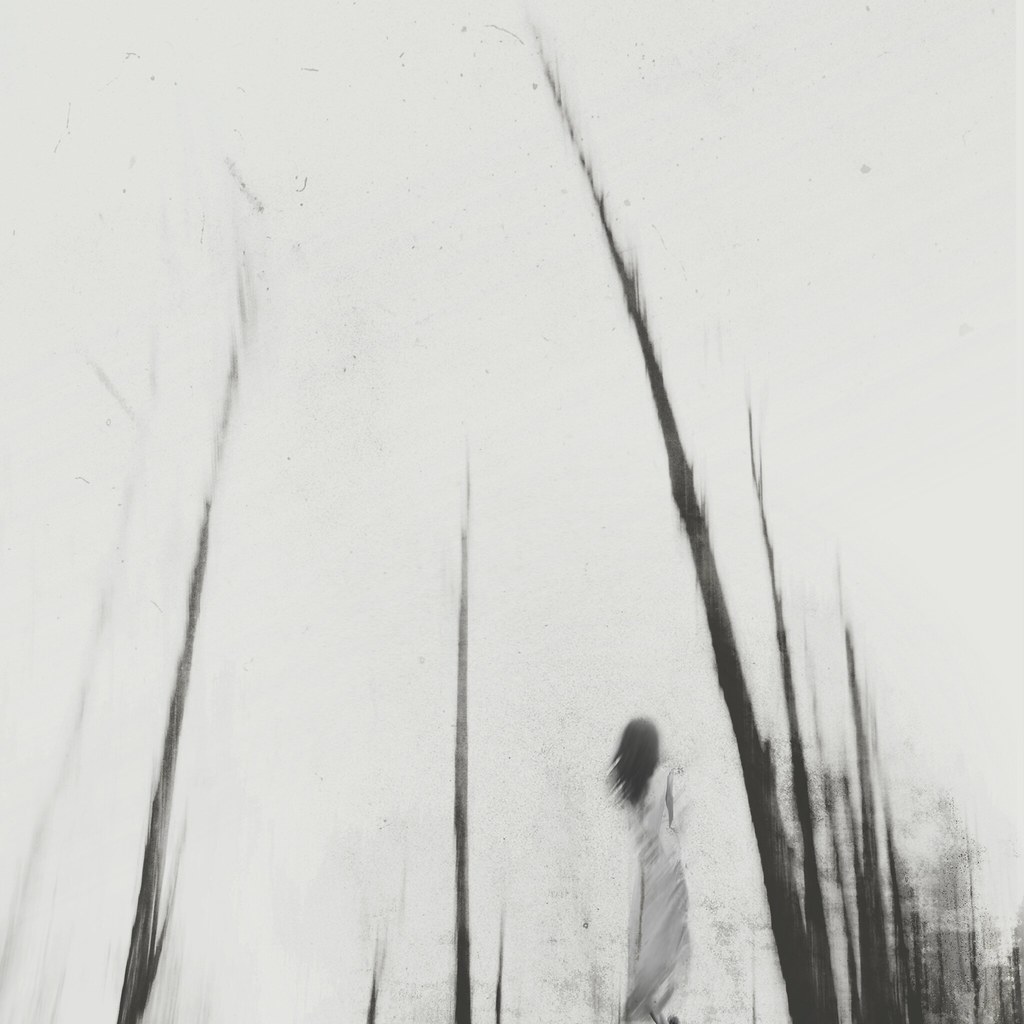 Apps used: PhotoshopTouch and Mextures
Backstory: So here I have used several pre-shot on my iPhone photos. My goal was to unite them into one and get expressive, a bit sad and poetic composition, I hope that I have succeeded. ) I have used both programs are usually only two-PsTouchApp and MexturesApp. I worked with layers and blending modes, a lot of experimenting with textures here but tried not to use them too much.

Apps used: This photograph was shot with an Olloclip macro lens using apps Hipstamatic and then processed with TouchRetouch and Snapseed.
Backstory: This photograph is an Olloclip macro shot of a beautiful Rose named after William Morris: the English Artist, Designer, Poet and Socialist. It is one of a photographic series created during my recent week as Artist in Residence at the Fox Talbot Museum, Lacock Abbey, Wiltshire. Lacock was the home of photography pioneer William Henry Fox Talbot and because of that, it is regarded here in the UK as the birthplace of photography. I was invited to Lacock to research and demonstrate a rare historic printing process that I work with. I make Anthotypes: photographs printed with plant matter.

My favourite part of the Abbey grounds was a beautiful, tranquil spot known as Lady Elizabeth’s Rose Garden. It became my ritual to spend an hour in the Rose garden at the beginning and end of each day. Roses were in plentiful supply, so it made sense to use them for my experiments. As an extension of this process, I began to explore the roses through my macro lenses. What evolved was a series of sensual, personal reflections.

Apps used: The picture was taken with my phone using the app camera+ to control the high contrast. Later I edited it with snapseed to work out balance and light. For bnw I used vsco with x5 preset. The finishing I always do in LoMob.

Backstory: This picture was taken at a lake called Hallwilersee in Switzerland. There ist a natural reserve with a stilt house and a watercastle. You can also take roundtrips on a boat. It was April this year with clowdy weather. Late in the afternoon the sun was coming through over the alpes. I was standing at the landing stage with a viewing direction the alpes. Nearby there were father and son fishing. It was a very peaceful atmosphere.