Thank you for your patience and my apologies for the late posting of Apps Uncovered this week.

No theme this week but just a collection of my favourite photos from the Flickr group with David DeNagel’s wonderful little dog “Peaches” taking the lead spot. Not only she absolutely charming but I thought the light and colouring on the image was so beautiful and David has really caught the fresh icy coldness in the air, cleverly blurring the surround to bring our attention to those little ice drops around the face and those pin sharp blackish brown eyes. Great image David!

Peaches by David DeNagel
Apps used: Straight out of the Apple iPhone X
Backstory: This is an image of my dog Peaches, a small, female Yorkshire terrier mixed breed. She was a foundling stray that my wife picked up about 7 years ago.
Peaches and I go just about everywhere together. She loves romping through the snow. After the last snowfall, I put her sweater on her and we both went to a large deserted fairgrounds. I think she thoroughly enjoyed herself. Her companionship means a lot to me. 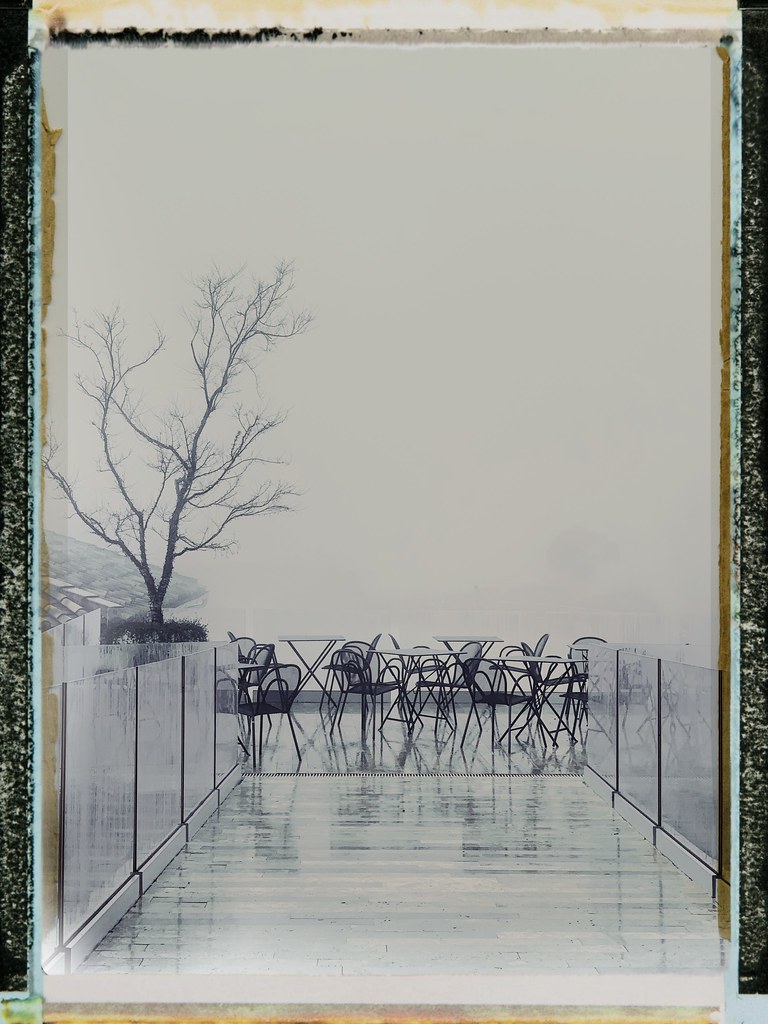 Apps used: I shot this with the iPhone camera app and then edited it in Hipstamatic, using the then-just-released Peel Apart Pack (Peale lens + Type 10 Pack film with some Laser Lemon Gel flash added).
Backstory: The photo was taken on a rather foggy winter morning in a spa in Tuscany. The sight was so otherworldly I had to stop the scene there and then. Too bad you can’t see the gorgeous Tuscan hills, the pools behind those chairs… and the cold of the day in contrast with the soothing warmth of the waters!

“No me mires no te veo” by Ale Di Gangi

Translation: “Don’t look at me. I don’t see you.”
Apps used: I shot this with the iPhone camera app, but only edited it a few months later in Hipstamatic, using the Peel Apart Pack (Peale lens + Type 10 Pack film + some Triple Crown flash).
Backstory: This is my loved half shot at a wedding of a couple of friends. I really liked the red bricks backdrop – in fact, I took a few photos there using also a Polaroid camera (you can find it on my Flickr/Instagram streams). 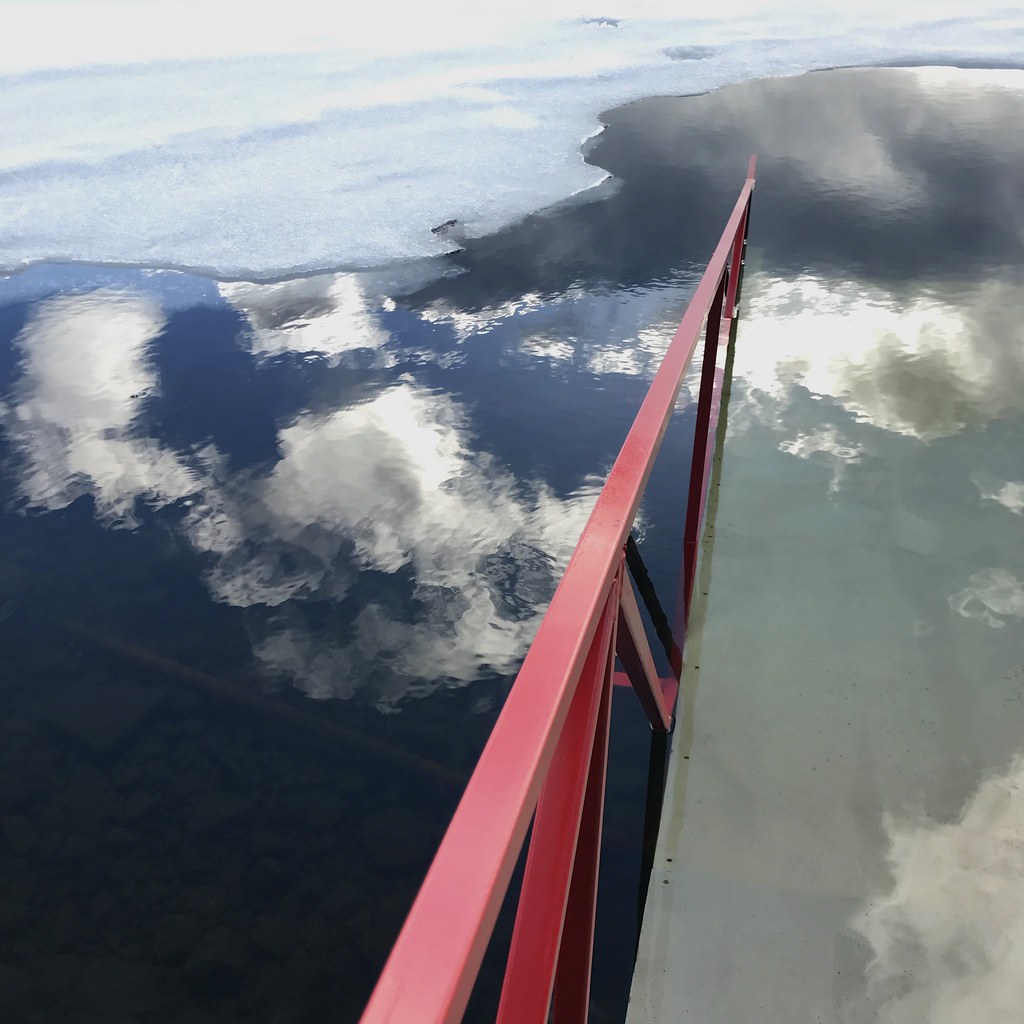 Apps used: Straight out of the iPhone.
Backstory: “Stepping Forward, Let’s Hold Hands” might look like a clever composite image but it’s actually a straight shot I made at Lake of the Woods using Camera+ on my iPhone 7.

The cold afternoon light was pure magic and the water almost still. In the winter up here in Oregon, the big lakes freeze over except right by the shore.  The melted water covered the boat ramp and reflected the clouds overhead. So did the deeper water next to the ramp. The graphic shapes grabbed my attention and I made several shots, playing with the red handrail. This one was my favorite. I used iColoramaS and TouchRetouch to balance the color and clean things up a bit, finishing with LightBrush to accentuate the railing.

I’m working on a series of images expressing my deep feeling about Climate Change and this one is a powerful header for that portfolio. 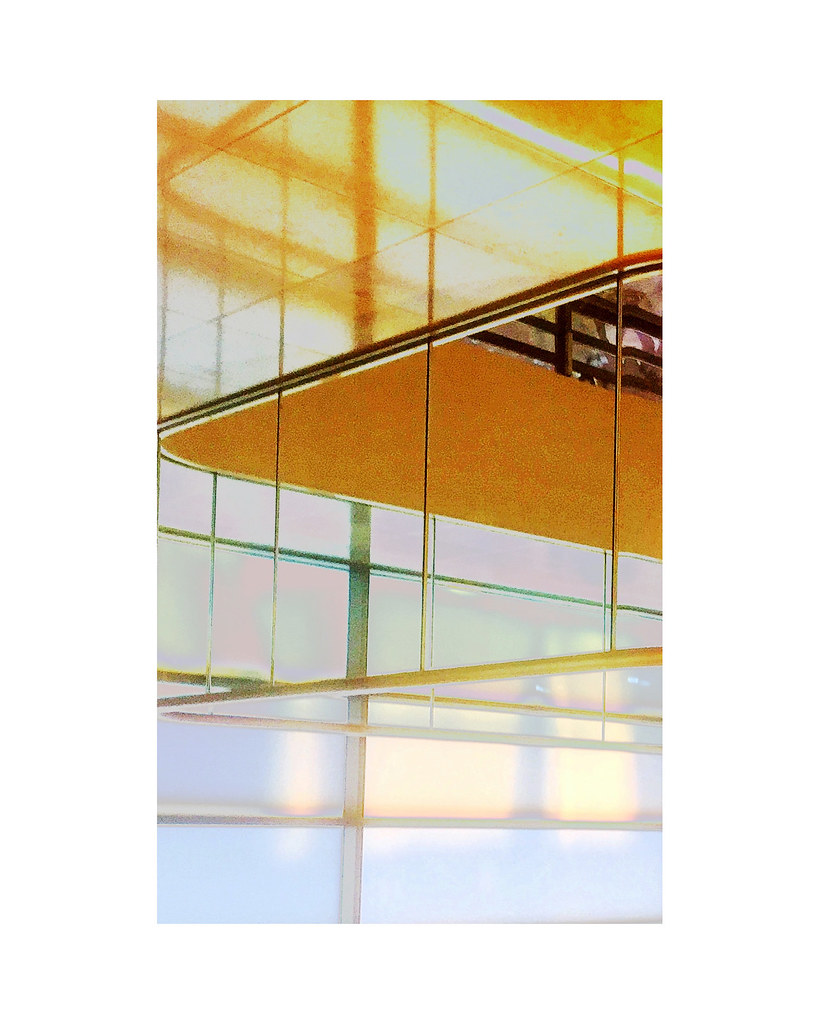 Apps used: iPhone6, Camera +, Fotor free
Backstory: I’m getting addicted to the escalator area’s in the shopping centre. I’ve already done some nice pics there. This area was a bit dark, but the colours sort of hit me. Back home I was really disappointed with the shot, because it was gloomy and had colours that were much too dark. Ultimately I did a crop of the part that I liked best and did some editing in Fotor free. Then I rotated the image 180º because it made more sense for the disorienting abstract image I had in mind. Fast forward to trying some borders . . et voilà 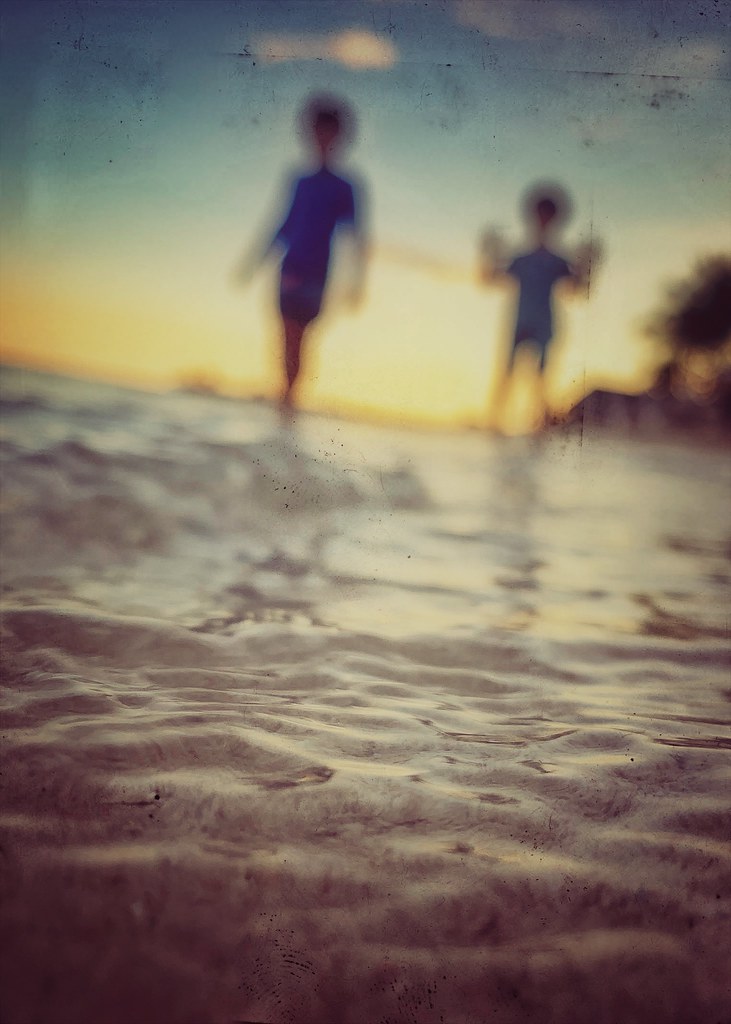 The sea and the stars by Mister Blur
Apps used: I use only Snapseed directly on my iPhone XR. Backstory: These are my sons playing in the beach in Playa del Carmen in the Riviera Maya, Mexico. It was nearly dusk, so light was changing fast, but luckily the iPhone has a fast response to light changes. I love to work at low points of view. I turned upside down the phone so the frontal camera was near the ground and I locked the focus at the nearest focal point of the phone, so the children could kept in the blurred background. I took several shots, I didn’t care about the waves or the slight tilt.
At the end, this one was my favorite shot. 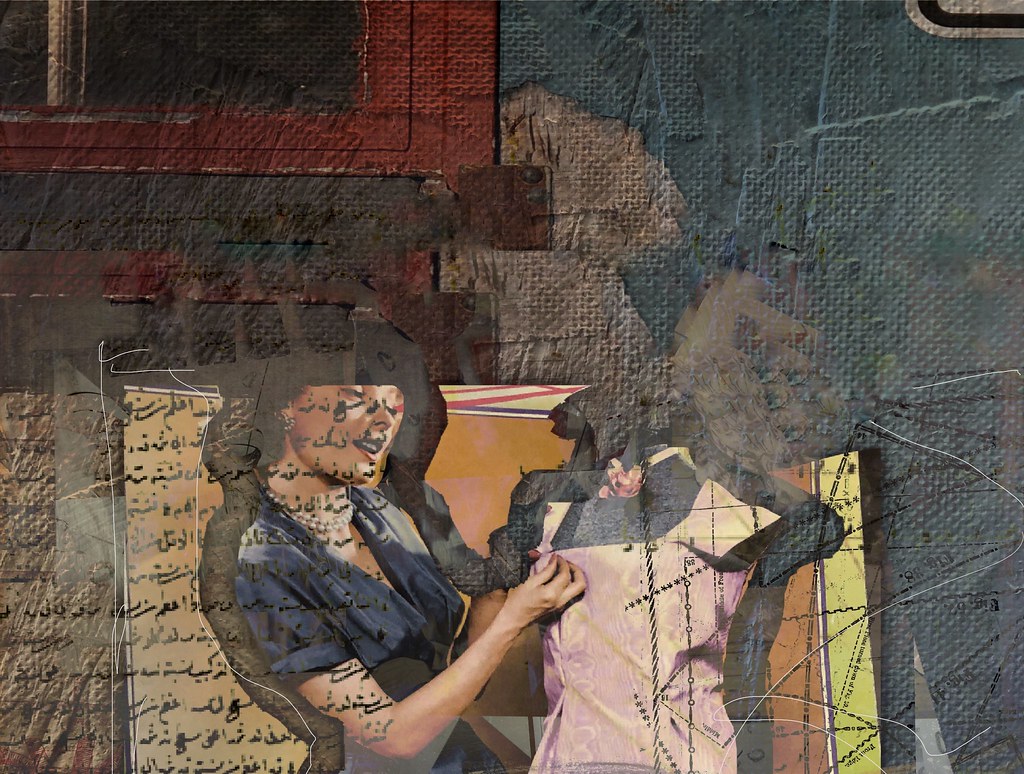 A Stitch in Time by catcall (Catherine Caddigan)
Apps used: Procreate and Superimpose X
Backstory: I am always photographing the things I see around me. This image started as a photograph of a wall, with a window, very simple and graphic. I photographed a texture from another wall of particle board, and the retro image was in an very old magazine at an auto mechanic, while I waited I shot several pages. I added other of my own textures from books. I used layer effects, masking or erasing. While I made this I was very conscious of tensions going on in the Middle East and elsewhere, it implies a certain naïveté in the face of world events. 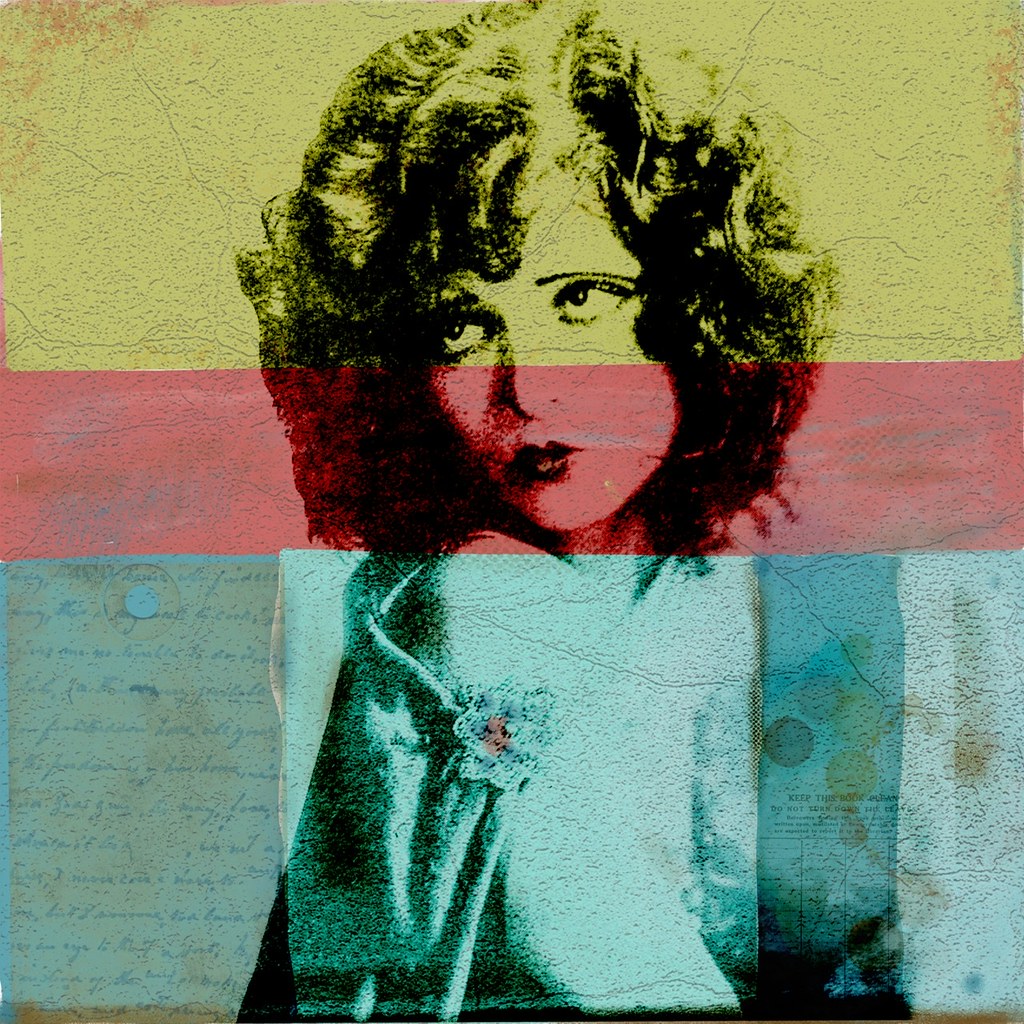 Apps used: Bluristic, Moldivapp and Glassapp
Backstory: To produce this particular digital collage I used 14 different layers of textures and images. Using my iPad and an Apple Pencil blended them together using Procreate 5.0.1. 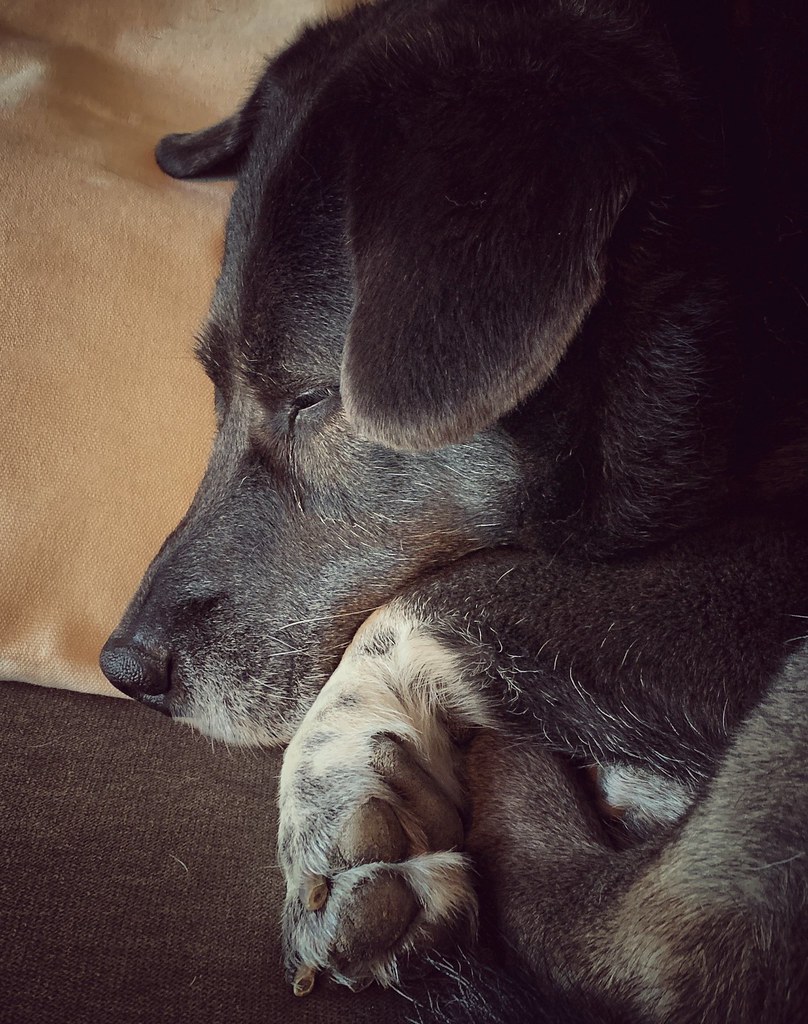 My girl by Mike Battista
Apps used: I used the camera app, PureShot. I used the app Snapseed for all editing and adjustments finally using the app’s Vintage #3 filter with some minor adjustments to it.
Backstory: I am afraid there isn’t much of a backstory to the image. My 14 year pooch, Mya, was napping beside me as we were sitting on the couch. I saw her and simply though that looks like a good shot. I happened to have my iPhone close by and took the shot. Fortunately, she didn’t wake up. This was a bit of a surprise as she usually does once I get the camera out. 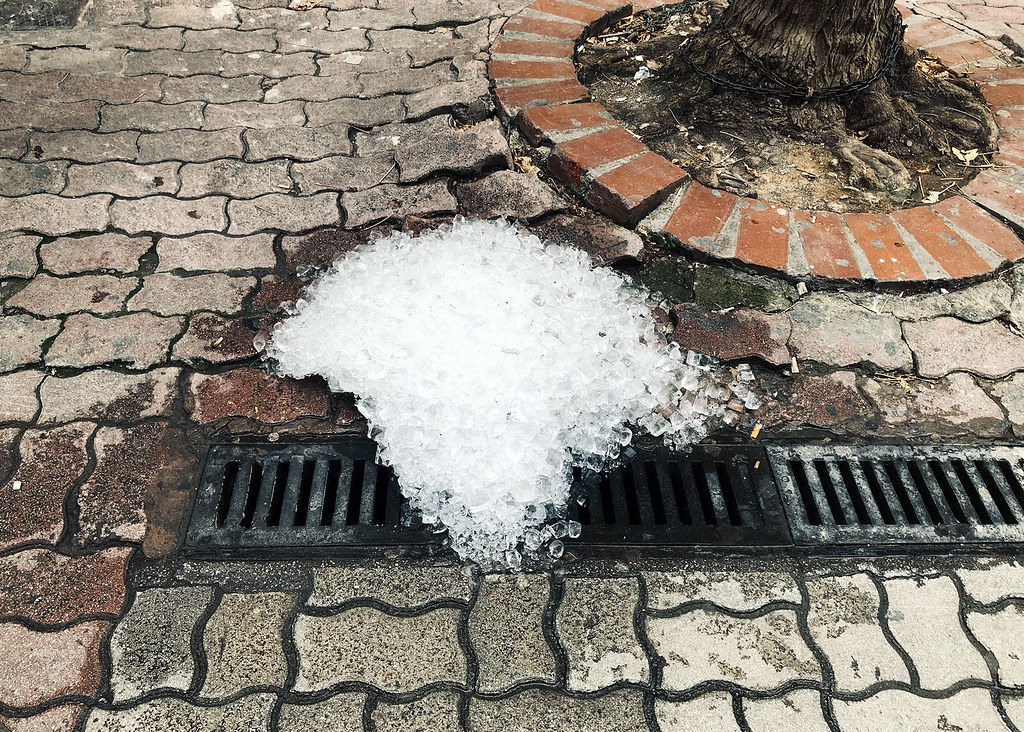 Apps used: I did just some small adjustment by Photo.
Backstory: I was walking in Athens when I noted the Ice – that supposedly one of thousand bars has just threw on the street – and I immediately took the picture!