Welcome to this week’s special Apps Uncovered. The iPC Flickr group reached over 100k photos this week with over 2000 members and iPC decided to dedicate this special milestone and this week’s selections to the wonderfully warm and gifted soul Jaime Ferreyros who sadly passed away on October 5 2015.

Many of you who were here at the beginning of iPhoneography time in 2009 will remember the hugely talented iPhone photography champion, Jaime Ferreyros who will be greatly missed by those he touched with his warmth and generosity of spirit – and there were many of us. Jaime was a very passionate iPhoneographer who recognized the joys and creative freedoms the iPhone offered very early. He contributed one of the first tutorials to iPhoneographyCentral and he was the first guest selector of Apps Uncovered. Jaime was an enthusiastic and passionate supporter of the iPhoneography movement and all round general good and gentle soul who will be greatly missed in the community. His ever-giving and hopeful spirit rose high above the general noise of the Facebook chatter. So, this week I dedicate the Apps Uncovered selections to one of our original iPhoneographers, Jaime Ferreyros. –

Thank you Jaime – your work and influence will be with us forever at iPhoneographyCentral.

You can read Jaime’s Uncovered selection from February 2012 by clicking on the image below:

Apps Uncovered is the longest running weekly iPhone art and photography gallery showcase in the world.

iPC Flickr group hits over 100k images!
Since 2011 Apps Uncovered has been rounding up a weekly selection of the best iPhone art and photography talent from around the world. Selections are made from our iPC Flickr group which hit a giddy 100,000 image contributions this week! and now boasts over 2000 members- WOW! But here at iPC we’re really more interested in quality over quantity which is why, a few years ago, we restricted our numbers to 2 images per week. It seems to have paid off since our members include many of the top iPhone creatives in the world including Sheldon Serkin, Cindy Patrick, David Ingraham, Sarah Jarrett, @arlein, Michael Kistler, Brendan O’shea, Susan Blasé, Marika Klug, Wayne Greer, Trish Korous, Paula Gardener, David Nagel, Clay Benskin and so many more!

Although it can take a few hours to put together, Bob Weil and I love this weekly task; it’s such a joy to go through all the submissions and see the amazing images you’ve created with the the ever growing list of apps available.

So what remains is a truly big THANK YOU to all of you who contribute and continue to contribute – and who have grown as artists over the years since Apps Uncovered appeared a few years ago. Also, thanks to our guest selectors over the years including Jaime Ferreyros, Andy Royston, Kate Hailey and Amy McGrath Hughes.

And of course thank you to all of you who contribute your amazing images to the iPC Flickr group and make it the wonderfully rich and varied learning resource that iPC has become. Special thanks to those of you who take the trouble to write nice emails and comments thanking Bob Weil and I for the work we do here – Believe us, the pleasure is all ours.

Final thanks to Gerard Collett for the striking lead image this week – Take care to read his careful observations in the backstory. – “not waiting for ‘Godot’, but for the lift. I wanted to evoke the banal sort of tension one experiences in everyday life”. Beautiful Gerard!

Wishing you all a great iPhone shooting and editing week!

If you would like to be considered the weekly gallery, join our iPC Flickr group by clicking here.

Apps used: I processed this app using Snapseed.
Backstory: I noticed this lady’s distinctive bag first, and also the matching pink of her trainers. I have great affection for those who are older and wiser than myself, but also I feel great affection for how they dress too. I think this lady’s generation might be the last who wear headscarfs in this way. (I admit, I thought her trainers were cool too). I am a big fan of Samuel Beckett, so shots like this are an open homage to the nihilism found in his works. In this instance, she is not waiting for ‘Godot’, but for the lift. I wanted to evoke the banal sort of tension one experiences in everyday life. 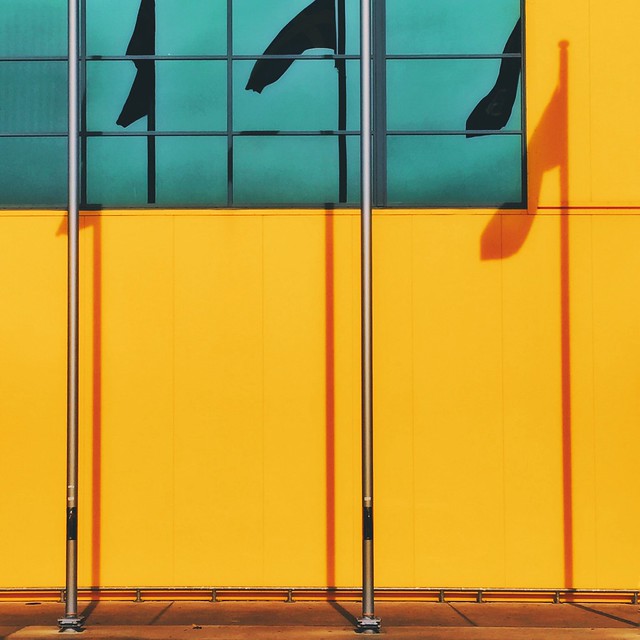 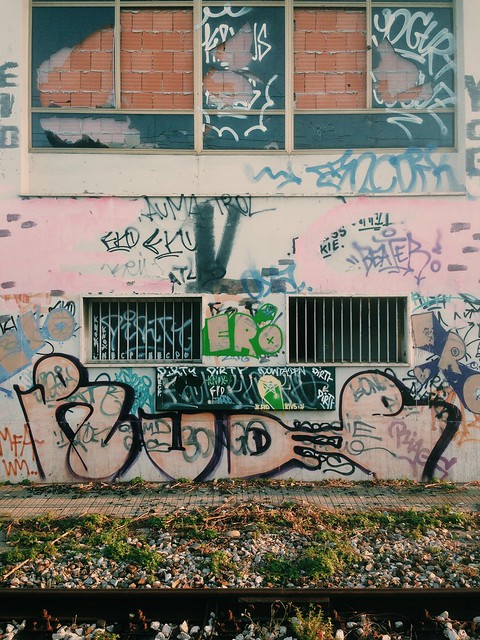 Apps used: This photo has been taken and edited using the VSCO Cam app. I applied the C1 preset, then performed a few more manual edits and tweaks.

Backstory: What interests me in this composition is the effect of layering in the stratification of different types of materials, colours, decay. It’s like a geological map of added vandalisations.

This shot is part of a series I am working on, bearing the same title, focusing on scenes of urban decay, found sad spots, blue-deviled settings. With Alégria I am interested in looking at “the spot”, excluding the overall situation surrounding it. In today’s world you can find these kind of sad scenes almost everywhere you go, even in highly civilised places but most of the time we tend to ignore them, creating blind spots that we forget about. I have no hurry to work on the series and am planning on doing a book of it at some point in the future. More Alégria shots can be found on my VSCO page 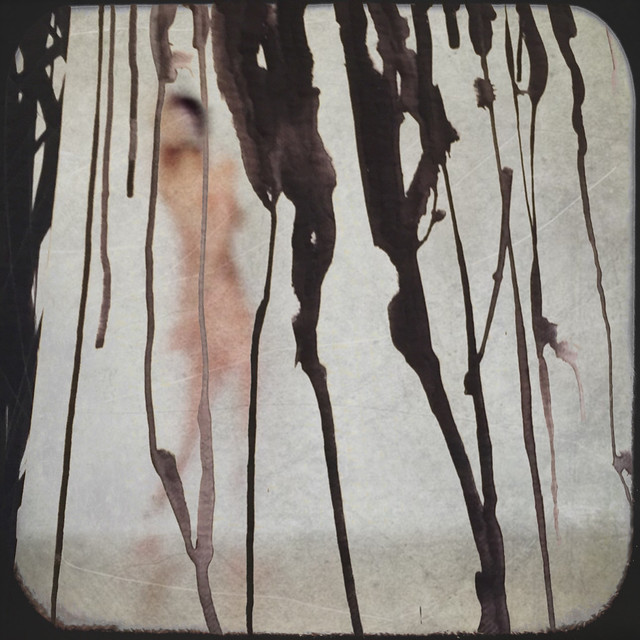 Behind the Curtain by Jane Schultz

Apps: slow shutter, juxtaposer
Backstory:  This image derived from a photoshoot exploring personal boundaries, and became part of an in depth series. Through the use of the slow shutter, I abstracted the model and later rebuilt aspects of her form. The perspective is a viewfinder, through the curtain, obscured. 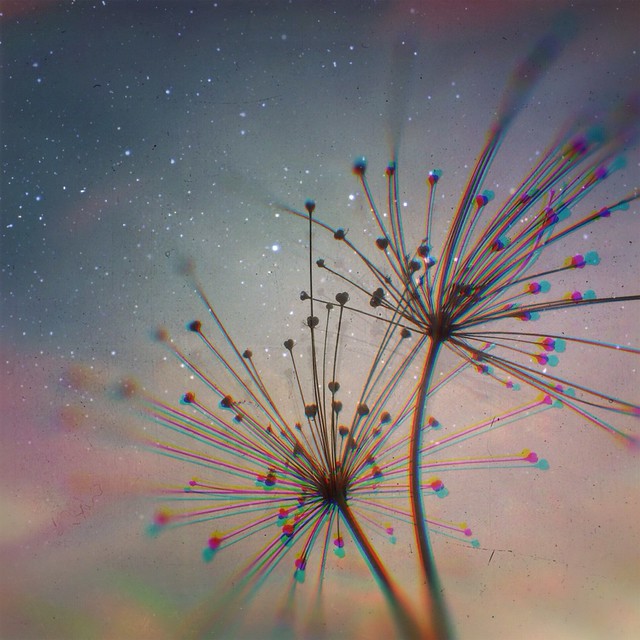 Apps Used: Tadaa, PicsArt, Afterlight and Mextures on iPhone
Backstory: This one in my mind goes back to one of my old methods when I first started iphoneography. I took spent Allium bulbs, which were huge, and held them up against a sunset sky. From there I played with the focus using Tadaa, and went for a sort of Harris Shutter look using PicsArt. I still felt the shot was kinda boring so I added some “Suzy signatures” using Afterlight and Mextures. I honestly posted because I felt my photos needed a break from some of the themes going on, and I was just plain stuck. I had been listening to Sonic Youth at the time I edited so I named it after a song off Goo that’s brilliant, it’s video has also spawned many an idea in this brain.   https://www.flickr.com/photos/thewalkingseries/22057635522/ Apps used: Shakeitphoto Backstory: I love taking pictures while driving (as a co-driver of course); this picture was taken on our way back home from disneyland paris, in the “middle of nowhere” of france 🙂 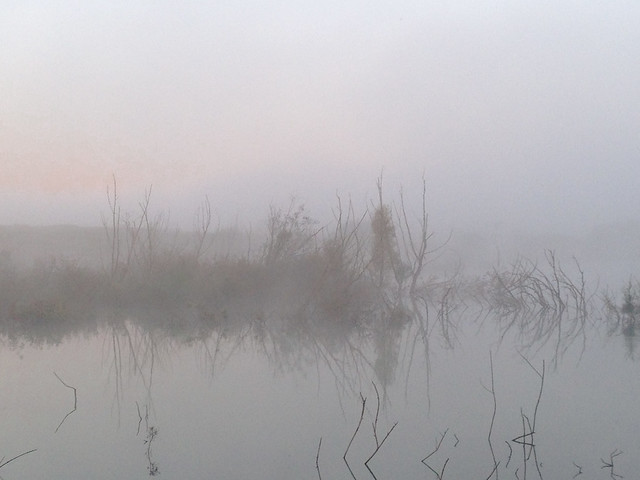 Apps used: Lightroom mobile
Backstory: Over the past few weeks, I have been trying to capture the ethereal qualities of autumn mist The location of this shot is the causeway running through Tyttenhanger Gravel pits in Colney Heath Hertfordshire. I took the shot at sunrise on a misty morning, most days this causeway is not that remarkable but the lake enveloped by the mist and with the hint of colour created by the reflected sunrise created a motionless & mysterious atmosphere, I processed the image by increasing saturation and vibrancy of the colours to emphasize the small amount of colour in the shot and then reduced the clarity to give a softer feel, in Lightroom mobile. 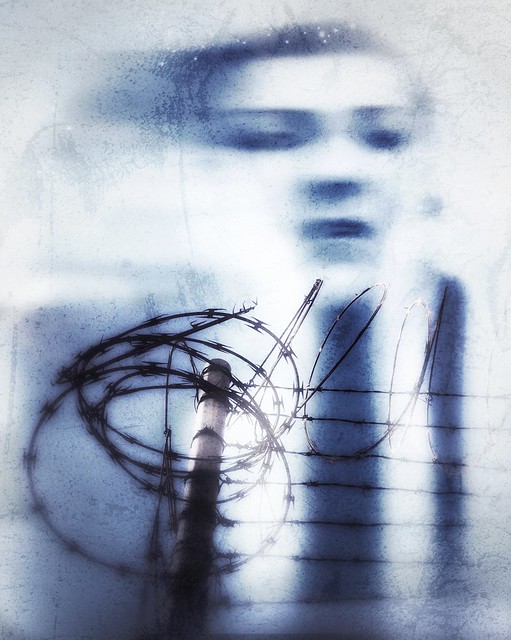 Utopia or Reality by Armineh Hovanesian

Apps used: Native Apple camera (iSight camera) edited with Snapseed, iColorama, Repix and ImageBlender.
Backstory: I do n’t have a Backstory for this photo really. I was working on the theme Utopia and that’s how this combo and magic came about. Below are what apps I have used. The result seen here is the result of the following steps: original portrait image was created using iPhone6 native camera, edited with Snapseed and iColorama. Original barbed wire photo was shot with Oggl. As for the end result: used Image Blender to blend/mask the two images; then off to Repix for the stars effect; lastly Snapseed was used for the grunge look and the “brush” was used for the additional exposure.

Apps used: Shot on my iPhone 4 and framed in Superslides.
Backstory: This was shot through the window while returning home one day. I was not driving! The bus had stopped in a good location. I was disappointed initially that I could not get both sides of the tug of war, but I actually prefer not seeing what they are pulling. It lets the imagination take over. 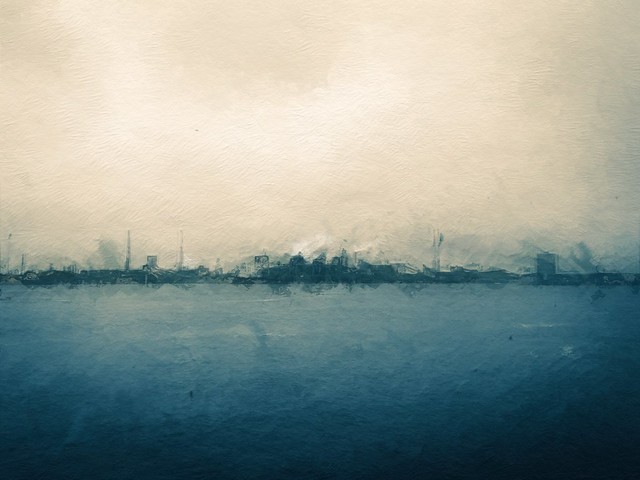 Apps used: Superimpose, iColorama, Snapseed and Stackables
Backstory: I started by blending two of my photos for the background.  I always build my story with superimpose,  I do not know why but I always like to highlight the hair on my characters (model via DA) I apply all the hair with superimpose gradually to give the effect of movement; also one of my characteristics in my work is the painterly finish, I love to texture finish using iColorama, to finish I worked the lights and contrasts with Snapseed and gave the final touch with Stackables.