We always have so many great images posted to our Flickr group each week, so it’s especially hard to select no more a handful for any given Apps Uncovered installment. Sometimes as I start my review, a theme seems to take shape almost of its own volition – and that’s what happened this week. There seemed to be a lot of pictures of images that suggested getting into an individual’s personal space, catching a person in a contemplative or preoccupied mood, or an image that somehow tries to “define” some core feature of an individual (including th obligatory selfies for this category). I don’t think you’ll find any of these short of excellent, and as a group they make an intriguing collection.

This week’s lead artwork, by iPhoneographic artist and regular iPhoneography Central contributor borisbschulz2009, is a captivating scene, with angelic wings perched on the shoulders of a small girl who has paused for a moment, in a dark setting, to watch strange and even sinister looking men on a television screen. She is all brightness, light and color, and everything else is cast in darkness and gloom. 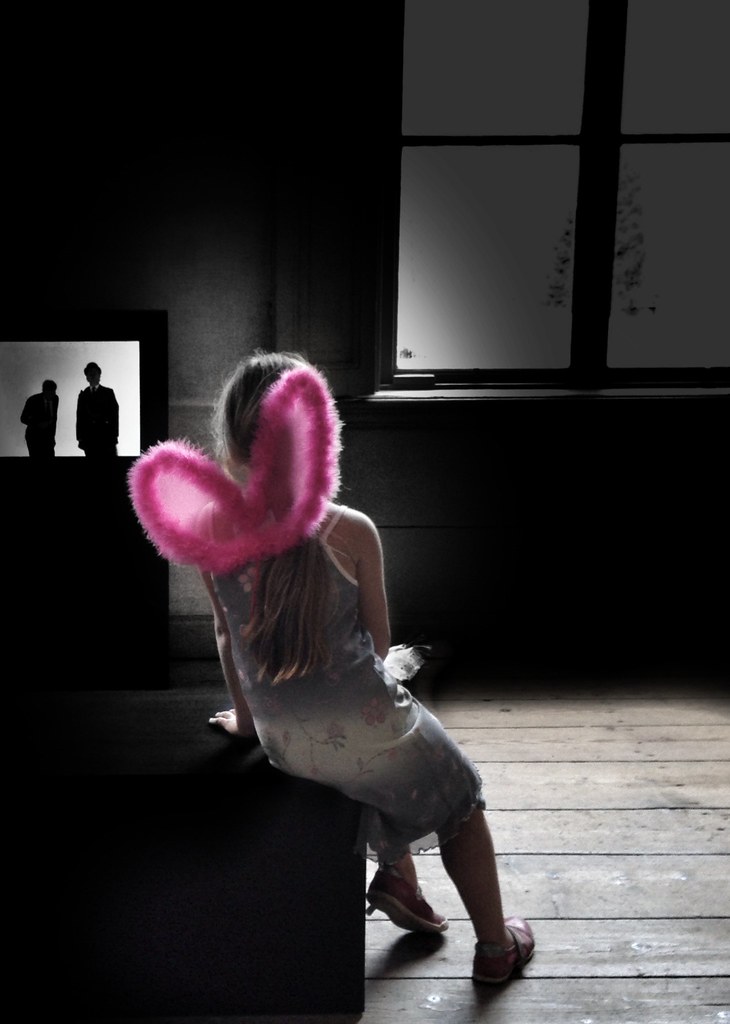 Contemplating self by Kim Martino

Backstory: I wanted to take a selfie because I had just colored my hair. Camera 360 has some nice selfie filters, so I started there with their Sexy lips effect. Then, I thought I’d try Pics Play 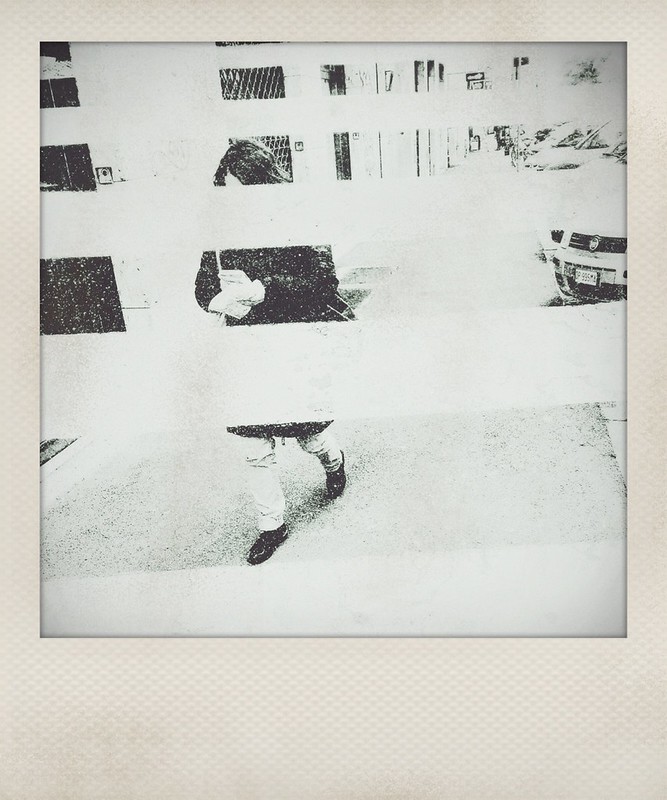 You can add up the parts, but you won’t have the sum. You can strike up the march, there is no drum. by lorenka campos

App used: Snapseed
Backstory: It’s difficult to explain, like asking your grandmother how she makes her delicious chicken soup or any other loved dish!

I used to use a Canon 6D with a zoom lens and when I was stopped at a traffic light or even in heavy traffic or just driving by, I’d click when my intuition said NOW! I now have an iPhone and do the same thing driving or walking anywhere! I never plan a shot to take! I just take my iPhone everywhere I go and am ready(with sound off)! It’s much easier to take a shot when people can’t hear the click or never sure if I’m pointing at them! With a camera, this is impossible unless you’re using zoom.

The iPhone is a gift, so light and unobtrusive. Most shots I take are completely candid so there’s no real planning. I really enjoy taking my phone everywhere and subways are the best for candid!

I was so lucky to drive by the father and son and second family in the background here….one of my favorite and special shots! 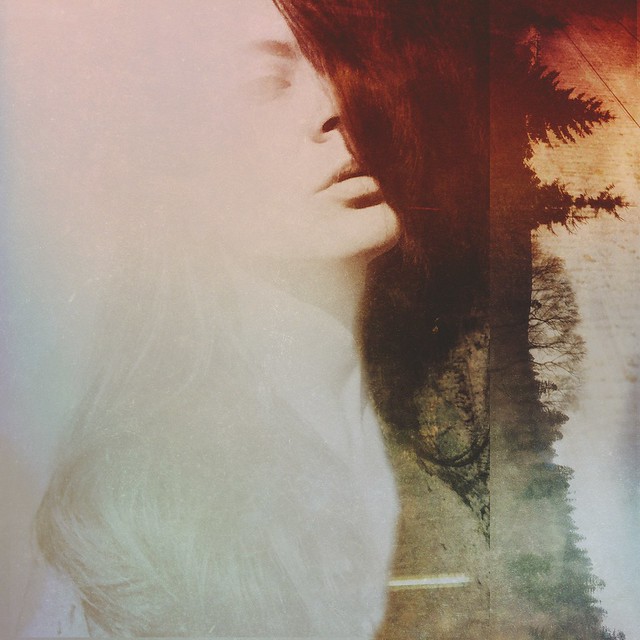 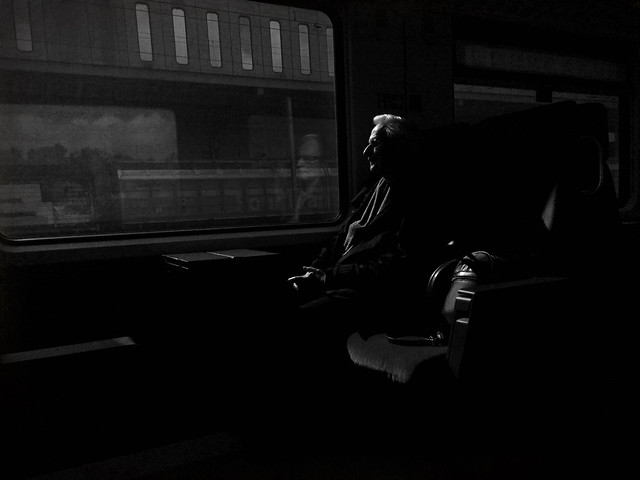 Traveller through times by rorofot

Apps used: the shot was taken with iPhone 6s using Camera+, edited in Snapseed and vsco.
Backstory: It’s a picture from my series “Stations & Travellers”. I like travelling in a train on a sunny afternoon – in autumn or winter the light is awesome. If you are lucky there aren’t too many travellers so you can focus on one person. You’ve got a lot of time to install a good exposure – here it’s minus 3 stop. I wanted a low-key picture to smother the environmen. I made a lot of shots to get the picture well framed with a interesting expression on the face and a appropriate background in the window. Later I made just a little editing like slightly cropping and eliminating some distracting lights on the seats. Finally I converted the shot in bnw with preset b3 in vsco. 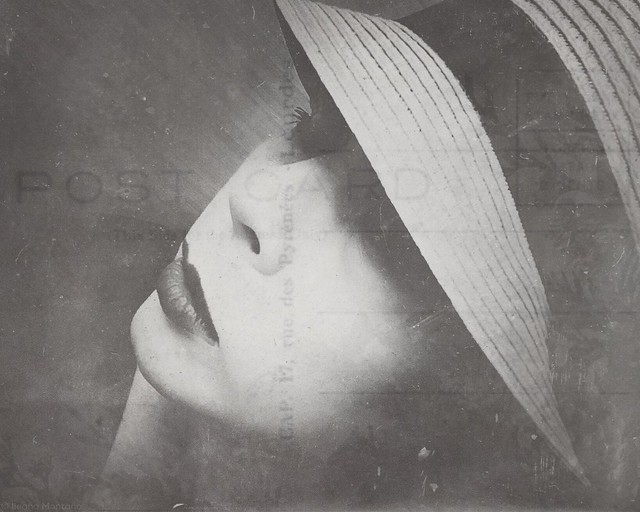 Apps used: It is a self portrait taken with an iPhone 6 and edited with Snapseed, iColorama, Union and Mextures.
Backstory: The story behind it is quite bizarre: It happens that I have always felt that if it is true that we have lived other lives before, one of mine was in the late 30’s or early 40’s in New York City. I would make this very long if I told you all the reasons, things that have happened to me and sensations that make me feel this way, but I guess the inspiration comes out mainly from the fascination I feel for those years, its fashion, its music and its ways in general. So, one day I decided to give it a shot and portray myself as the person I imagine I could have been and this is the result. 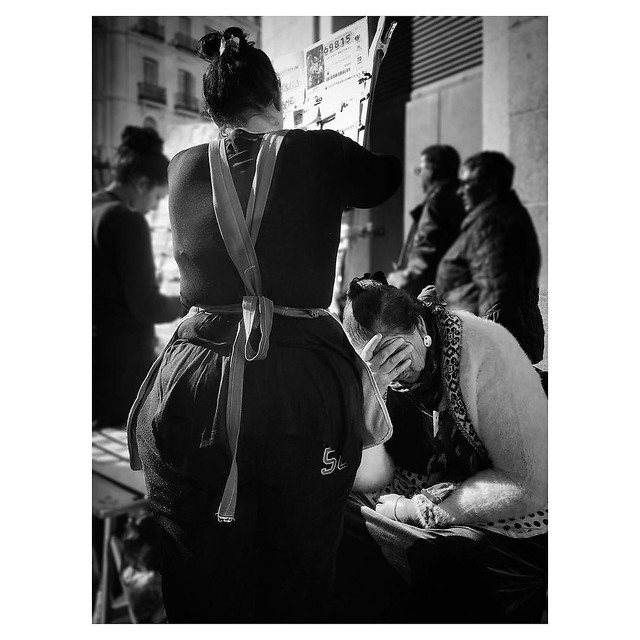 She doesn’t believe in good luck… by Luisón

This is a very quick shot. I was wandering around Madrid´s center, as I usually do. It´s Christmas time and there are a lot of people (usually gypsies) selling lottery, because the biggest lottery is next Thursday December 22nd. The light was beautiful. I suddenly saw this woman who seemed to be moaning, sad. I approached quietly, framed and moved away very quickly.

Apps used: Blackie app, Snapseed
Backstory: I had taken my wife to a hospital for some tests. I decided to wait out the time by walking around the building, which was unfamiliar to me.

So many individuals, coming and going; some worked there; but the majority of people were seeking care; seeking aid; seeking someone to listen; usually ,their doctor; sometimes just another human being.

This older, handicapped woman seemed to be just such a seeker. I first saw her on the ground floor. She could only move with a shuffle,holding tightly to her walker, equipped with the familiar tennis ball coverings on the back legs. She often paused ,as she tried to navigate the seemingly labyrinthian passages of the building.

I followed behind her; mostly, to capture the image I saw in her; and yet, if necessary, to be of some kind of possible assistance ,should she be left without a better option than myself. Finally, on the second floor, she ambled down a long corridor, the upper portion of which was lined with windows. I photographed her there, in that hallway ,with her mirrored reflection in the glass seeming to ask the same questions as she must have been : will I ever get there? is there help for me?

Eventually, I lost sight of her. 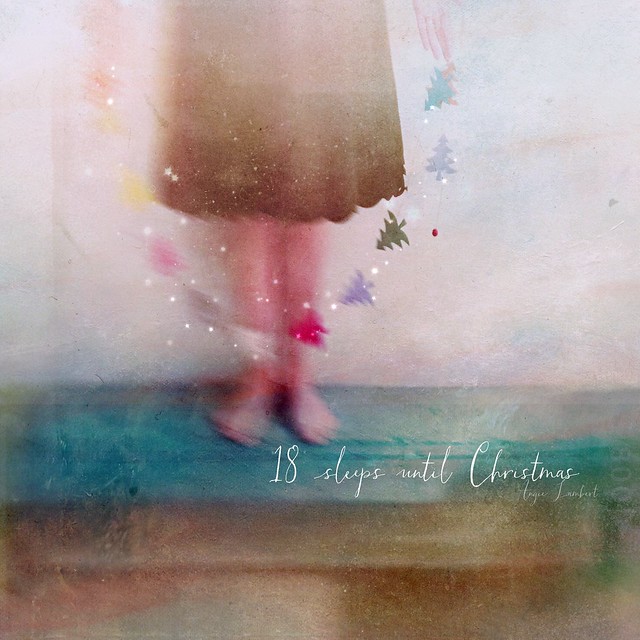 18 Sleeps Until Christmas by Angie Lambert 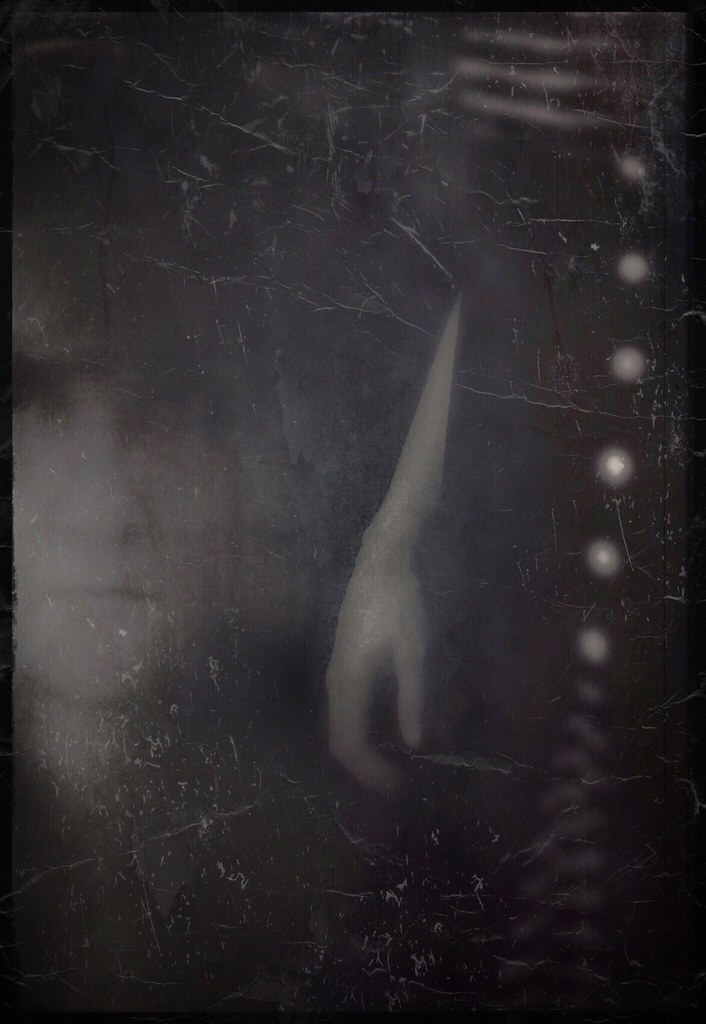 A une passante by Sarah Kuhn

Apps used: Snapseed, Touchretouch, Stackables, Superimpose
Back story: I always loved to be behind the camera because I hated to be in front of it. The first time I made an exception was this night, when I wasn’t ready to sleep yet and started experimenting with low light self-portraits. The first App I usually use in postprocessing is Snapseed, in which I desaturated the two basic images (body and face) and made some basic adjustments. I blured some parts in TouchRetouch and blended the two images in Superimpose. In Stackables I added the formula „Tintype“ and experimented with some other Textures, then I used Superimpose again to combine different versions. Final crop and border in Snapseed.
The title refers to a poem of Baudelaire I love.