This week’s lead artwork, Jun Yamaguchi’s “Paris,” is a bright, life-affirming image full of motion and humanity – like so many of Jun’s pieces. Perfect for our times, I think. Jun is one of the spectacular artists featured in our book (http://www.amazon.com/Art-iPhone-Photography-Creating-Photos/dp/1937538184).

If you’d like to see your images considered for selection to our weekly Apps Uncovered feature, be sure to list the apps you used to create your image when you upload it to the iPhoneographyCentral Flickr group. (And as an added bonus to other members who would love to learn from your successes, consider adding the “Backstory” describing the creative process that led you to capture and process the image as you did.) 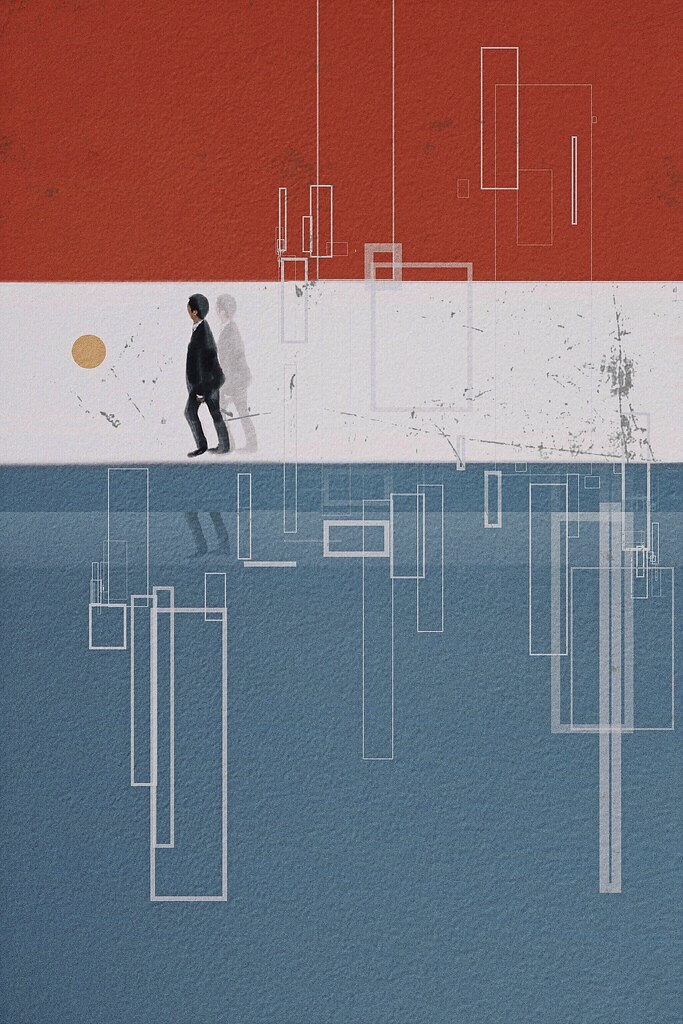 Apps used: I processed it using Snapseed – just tuned it a bit then vintage filter.

Backstory: I took this shot of Noah when we went camping last week. I love the way he has taken to reading this year and couldn’t resist snapping a pic while he was sitting on the bank of the lake with his feet in the water and book in hand. 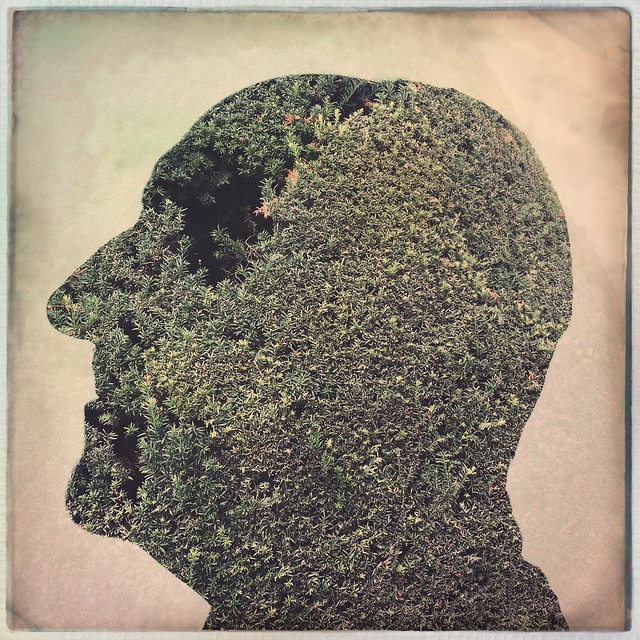 Backstory: This image is part of a vast series of double-exposures I began a few months ago. I found the technique on hipstography.com and began experimenting with the hipstamatic app’s double exposure feature. I photographed friends’ silhouettes and printed them out so I could carry them in my pocket when I photographed, to use for the first of the two images in the double exposure. I visited Paris in September, and armed with my iphone and a pocket full of silhouettes, I looked for things to fill the heads of my friends. This was one of hundreds of topiary shrubs in front of les Invalides, the veteran’s hospital and military museum in Paris. When taking the double exposure, you can’t see the first photo when trying to position the second image, so lining up the two images is a guess and a challenge. I came home from 3 weeks in Paris with 12,000 photos, all taken with my iphone. About 2,000 use this technique. I’ve been posting the results on my flickr site. 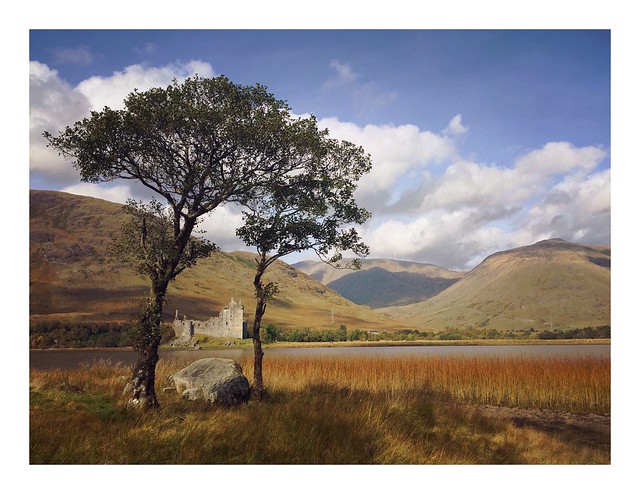 Backstory: Although I’ve visited Kilchurn many times as a tourist, this was my first visit with the express purpose of making a picture, so in some ways I had the benefit of understanding the topography somewhat beforehand – always a massive advantage for the landscapist.

I was blessed with a glorious golden Autumn day, and spent two hours here on the East bank of Loch Awe, trying various compositional ideas – many of which I’d considered in advance and mapped out using my Light Direction tracker app. Surely one of the most valuable and underrated of any outdoor photographers app collection!

Walking to a position roughly 45 degrees east of the castle – and it’s litre promontory I found it framed quite sweetly by these two beech trees (are they beech?) and attendant rock. I felt that this was my shot – mainly because of all of the thousands of images id seen of Kilchurn during preparation, id hardly seen this framing – and with so many of these iconic Highland scenes, it is really hard to add anything to the canon that’s in any way ‘different’

Kilchurn was high on my list of locations from the moment I began to map out the itinerary for this trip, and it’s stunning location did not disappoint in any way. Much as I enjoyed making this picture, I can certainly say that I’m keen to return in a different season (deep winter would be my preference) to try again. 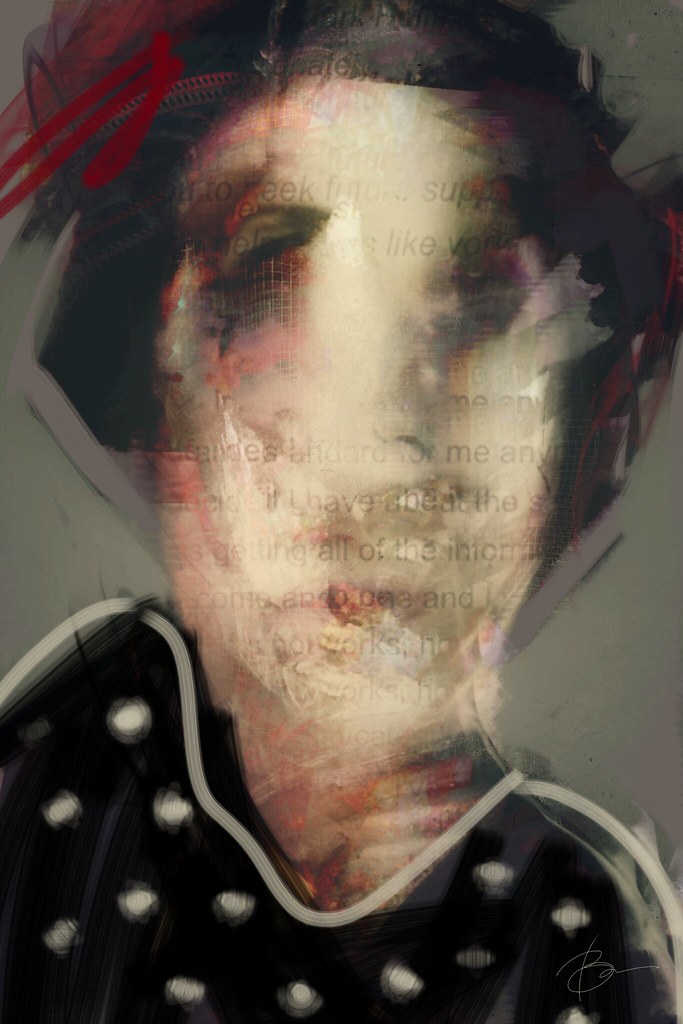 Not there yet by Bobbi McMurry

Backstory: This is a self portrait I created in response to a rejection letter to a call I’d applied to. I know there will always be no’s with the yes’s, but I wasn’t happy about it that night. It’s very rare that I complete something in only a couple of sittings, but this was one of them – I suppose the emotions were flowing through my fingers without conflict from my brain!

My Humps by Scott Woodward

Apps used: I made this photograph last week at Giza using the in-camera photo app on my iPhone 6S and then processed the image using Snapseed.

Backstory: This was my first visit to Egypt, and this image was one of the very first photographs I shot whilst there. As most people, I was overwhelmed at the Pyramids. And as one of the most photographed places on the planet, it was difficult to try and shoot these majestic structures in a unique and create fashion. But as my friends and I were strolling around the vast desert complex, this Bedouin man on his camel strolled past us, but not before stopping for a second right in front of me — and creating a perfect photographic moment. 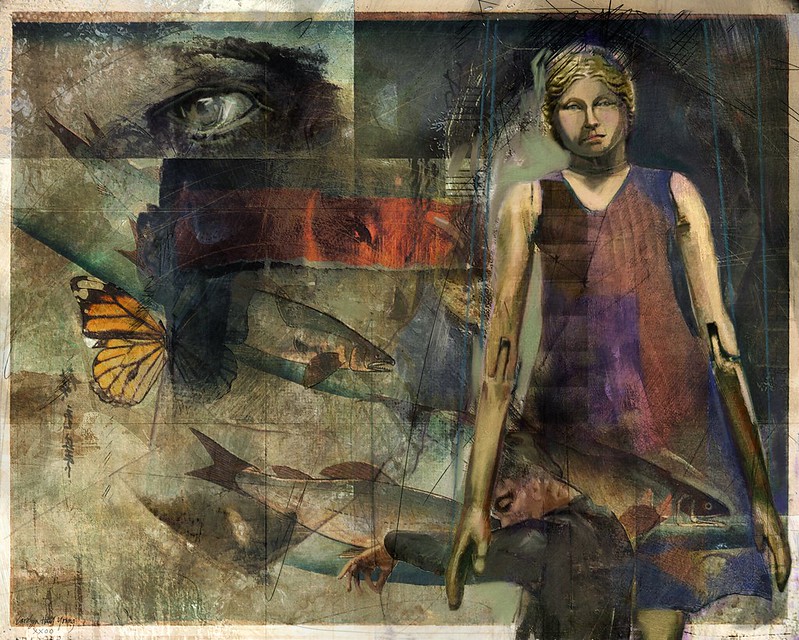 Apps used and backstory: This painting was made on an iPad Pro, with an Apple Pencil, using iColorama and Procreate. I moved back and forth, between these two apps, layering, compositing, masking, painting and refining color relationships. I saved versions as PNGs, to maintain image quality, and I tried to utilize the strengths of each app. Eventually, I arrived at at a moment of peace, when I feel harmony in what I have done. In this, it took several days, and several temporary conclusions, before I reached the end.

What I love about working in digital media, is that I can test ideas, change my mind, move in different directions, with so many choices. It is so nimble! It is, also, compelling, and exhausting. I miss the mandatory reflection time in having to weigh and imagine visual choices, and in literally having to wait for paint to dry, with natural media.

I had been working on a portrait for Claude Panneton, which took much longer than usual, and was relieved, satisfied, and happy to think it was finished. He is a mobile art friend, whose work I respect completely. I used several of his images, some of my own elements, and found images – an old Japanese print of fishes, textures, a butterfly etc. The first version, had a full portrait of Claude on the right side, and as often happens, I later realized that I liked the depth and magic of the background, on the left side, better than the fully realized foreground focus of the “subject”.

I was selecting images for a competition, which a friend talked me into entering. Having asked Claude’s permission, I was preparing to submit the piece. Out of the blue, I remembered a 2nd century A.D. doll, found in a sarcophagus of an 8 year old girl, in Rome. The doll was ivory. I had saved the image to a “someday” folder, a while ago, because she drew me – the sweetness and the sadness. Then, it is as if she had to be seen, urgently. After more hours of painting, masking and layering, she arrived, large, in color, renewed, clothed, and striding as if from her own vision, somber, thoughtful, and about to free herself from the puppeteer’s strings. The articulated 2nd century doll came to life, becoming real, to me, as our dolls do, when we are children.

This one rare doll, survived, loved by a child who died more than 2000 years ago, and whose family had the grace to put her to rest, with love, with her toy. I felt respect for the maker of the doll, also, for the care and craftsmanship in her. The doll emerges, in this image, from fragments of dreams – doll becoming puppet-spirit – dwarfing the puppeteer. I felt a bridge of love.

I submitted the piece, in that state, to the competition, then, went on to work with it, for another full day. I was completely unaware of time, tweaking texture and tone until it arrived here. I had no good reason for doing this, other than being curious about where it would take me. I am as surprised as anyone.

What do these elements have in common –

For me, it is about connecting to love and beauty, pausing to reflect and appreciate the very non-linear ways our imaginations can bring the humanity of past into the present moment. It is humbling, challenging, and elevating, I stand in awe of the possibilities.

Apps used and backstory: I shot this photograph last month at sunset near my house, using VividHDR and edited with Snapseed and Stackables. 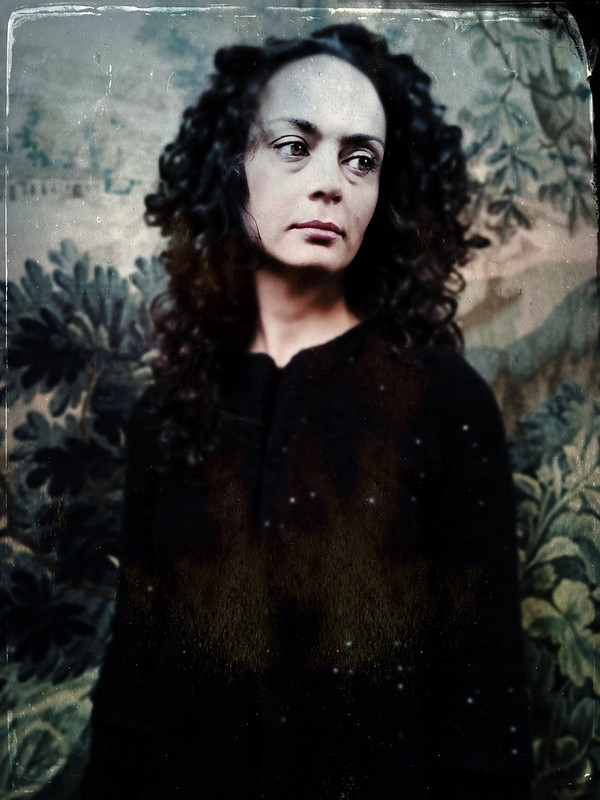 Apps used: This shot was taken with an iPhone 6s using the Camera+ app, then edited with TinType.

Backstory: This image is part of a much wider project called “Impossible Humans”.
Impossible Humans is a collective effort involving iPhoneographers and analog photographers worldwide. The project revolves around the portraiture of people: it is about uniqueness and personalities, enhancing our awareness of being humans in every respect, each with our own with flaws, passions, emotions and dreams. By taking serialised portraits of people we aim at reviving and reinterpreting in a contemporary social key the action of Andy Warhol, who immortalised artists and celebrities who have become cultural icons.

This specific photo belongs to a very special session held in my hometown Firenze (Italy), dedicated to the Renaissance period and its people that molded this town and the history and development of Italy itself.

For more informations and to see more of Impossible Humans – but also to contribute to the project and be part of it – you may want to read and visit the following links. Anyone is very welcome!
https://magazine.the-impossible-project.com/impossible-humans/
http://impossiblehumans.tumblr.com/
www.facebook.com/impossiblehumans/
#ImpossibleHumans