This week’s Apps Uncovered is all about Childhood – the wonder, the discovery, the awkwardness, the newly-found talents and newly-minted experiences. From almost the moment I began selecting the images for the week, I began to discern a theme. There were so many really great images that touched on this special time of year for children (fall, with Halloween, or All Hallow’s Eve in western countries), but also that wistful feeling of the passing of yet another season, one year closer to adulthood, joyous and yet bittersweet, with that exciting/frightening moment of complete freedom from our parents and all “constraints” just around the corner. Contributors include “regulars” Vanessa Vox, Erika Brothers, Jennifer Bracewell, Shel Serkin and Natali Prosvetova, and Janine Graf, along with complete or comparative newcomers goh, Thomas Toft, rudi foehner, Kathy Clay, Connie Gardner Rosenthal, Petyr Campos, hyacinth50, Angie Johnson, and Jerzy Jachym.

The first image by Angie Johnson is one of many of hers that artfully capture the innocence and yearning of childhood – this one made still more poignant by a great selection of verses and a wonderful title (although I still have a nagging suspicion that this is a selfie). I couldn’t resist selecting two of Erika Brothers’ images, both of which with the same fall/Halloween-mystery mood that is so characteristic of those exhilarating yet a bit frightening early years as we first come to experience the bizarre and haunting aspects of our lives and our discovery of the cycle of the seasons of life itself – death and transfiguration and rebirth and renewal. The sweet innocence and bliss of goh‘s “Balance Biker” is followed by Kathy Clay‘s equaly pastoral “TheOcean” and Vanessa Vox‘s idyllic “The girl with candyfloss.” Childhood begins to border on youth as the little ones strike out on their own (or think they do), in hyacinth50‘s “Walking away,” Jennifer Bracewell‘s “Cocoon,” Thomas Toft‘s “Hula hoop,” Shel Serkin‘s “Lemon Ade” and Erika Brothers‘ second expression of youthful adventure.

Starting with Natali Prosvetova‘s “Don’t Speak, Don’t Cry, Play Hide and Seek,” we have images that capture that precarious moment as children cross the threshold into young adulthood – with all the joys and awkwardness that attend the transition. Jerzy Jachym‘s image “Expectation,” Janine Graf‘s “out of his league” and Connie Rosenthal‘s “Hello” seem to convey the uncertainty and hesitation in taking that next step out of childhood and into something new, exciting and perhaps a bit frightening. The final two images, “-o-” by rudi foehner and “Surfers No. 50” by Petyr Campos suggest a new-found confidence as young adults begin to engage with the larger world on their own terms.

He Almost Got Away by Angie Johnson

I leaned toward him over the rabbit’s hole,
Pinched his big toe,
Lifted his fury body,
Stopped in front of the closet door,
Photographed the capture,
Admired my catch.

Living In Appalachia Series
iPhone Photography (iPhone5)
… oh, the things we do around the house on a day off work.

I love discovering things around the house for photography props and then featuring them in unusual ways. This rabbit rests in the spare bedroom, on most days. One thing led to another and before I knew it, he almost got away! For my love of photography and words, I couldn’t resist adding a few lines to complete the storytelling of the image. I hope you find inspiration, among the simple things around your house. 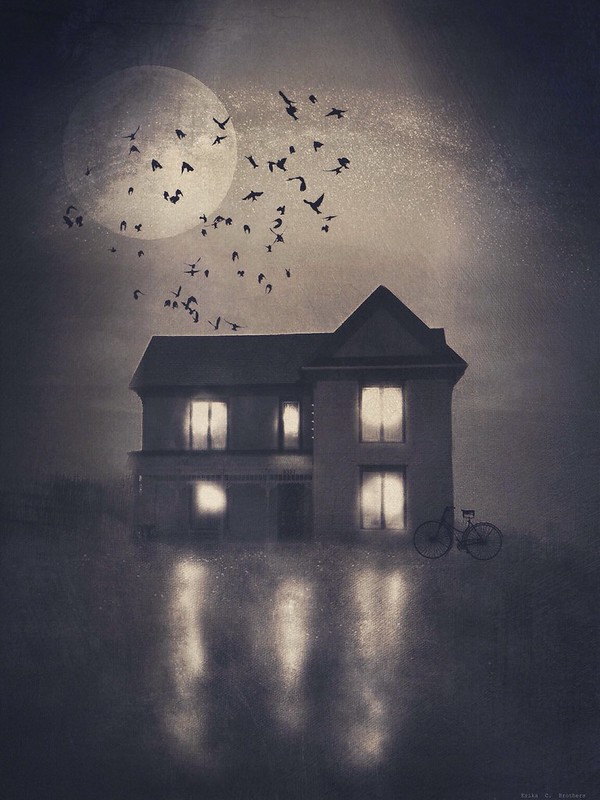 Backstory: This photo was taken at the Frisco Heritage Center, a village comprised of homes and buildings Representing the area’s past historical aspect and view. I start with Superimpose to make the initial collage, next step consisted of working with MonoPix to create the black and white contrasts. Then I worked with Alien Sky to create the moon and stars effects. The light and reflection effects on the windows I used Repix with Stain pen effect. As the final touch to give more texture I used Stackables. 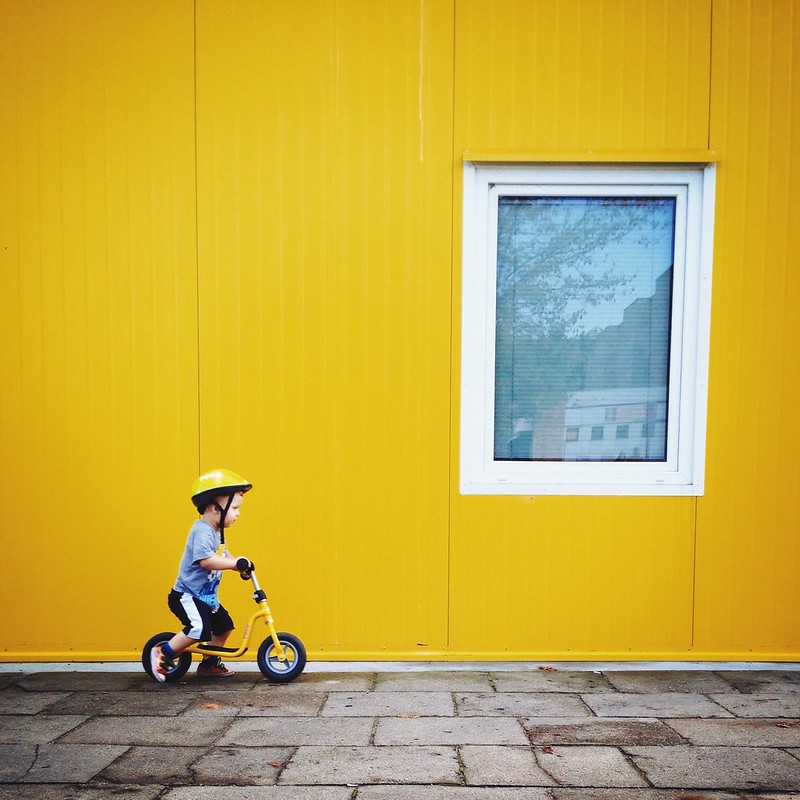 Backstory: My two-year-old son has just learned how to ride a balance bike and usually it’s not easy to capture this skill as his speed is making it impossible. But this time he decided to do a few circles around this small yellow building. When I noticed this little guy on his yellow bike, in a yellow bike helmet passing yellow wall, I already knew how the frame should look like. I knelt down to point my iPhone 5c camera at him from a lower angle and waited for his next circle, so he could enter my frame exactly where I planned. As he was riding around over and over again – I had a few chances to retake this photo and choose the best one. The Ocean by Kathy Clay

Backstory: I live in Southern California and take lots of photos of the ocean, especially off-season when its quiet.This particular image is a blend of a recent photo I took at the beach and an old photo of my daughter and a friend sitting by the shoreline. For post processing I used IColorama, Glaze, Superimpose and lots of layers until I got the amount of texture and blur I was trying to achieve.

The girl with candyfloss by Vanessa Vox

Backstory: Do you remember your past past days of your childhood when a candyfloss [or, in the US, cotton candy, ed.] brightened your day? This girl caught my attention because she seemed to be the winner of the lottery: With the flowers in her hairs, the beautiful pink dress and the candyfloss she was the princess of the scenery. Fully dipped in her luck she seemed to enter into a world beyond reality.
I’ve blurred the environment with big lens to focus on her. And with Retouch I eliminated distracting details. With PhotoToaster I enhanced the colors. I wanted to emphasize the light on the candyfloss so that it looks like a magic wand. Classic Vintage gave me the final touch of a golden tone and a worthy-looking glossy texture. 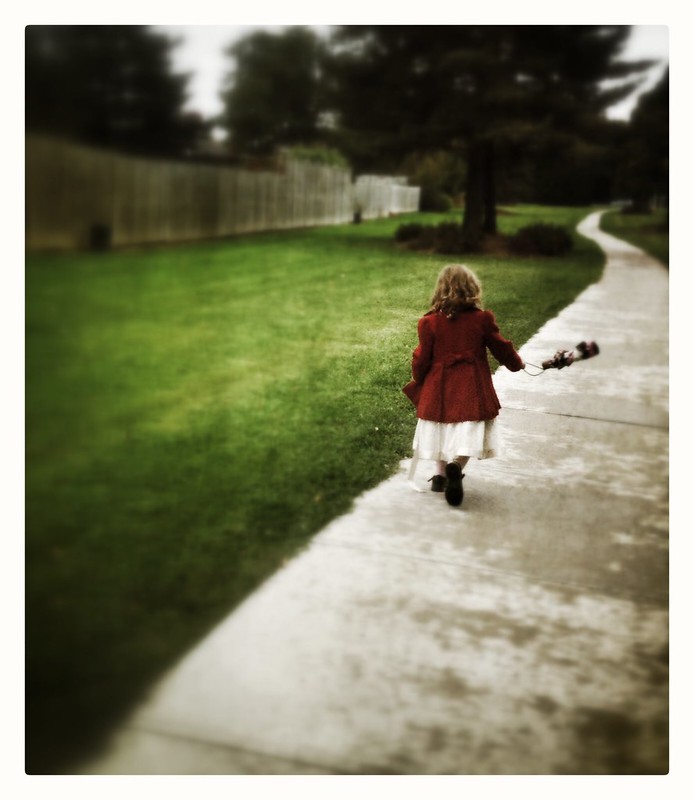 Walking away by hyacinth50

Backstory: I composed this image while walking a young friend home from school. It was a bit of a drizzly day, I had brought my umbrella with me. We did not need it at this point, she wanted to carry it. I stopped and watched as she walked ahead of me happily swinging the closed umbrella. Grabbed my iPhone, took a few shots. Later I used in the in camera app to crop, then used the Snapseed app, filters and adjustments including tilt shift to blur the background. My intention was to create a vintage feel. 🙂 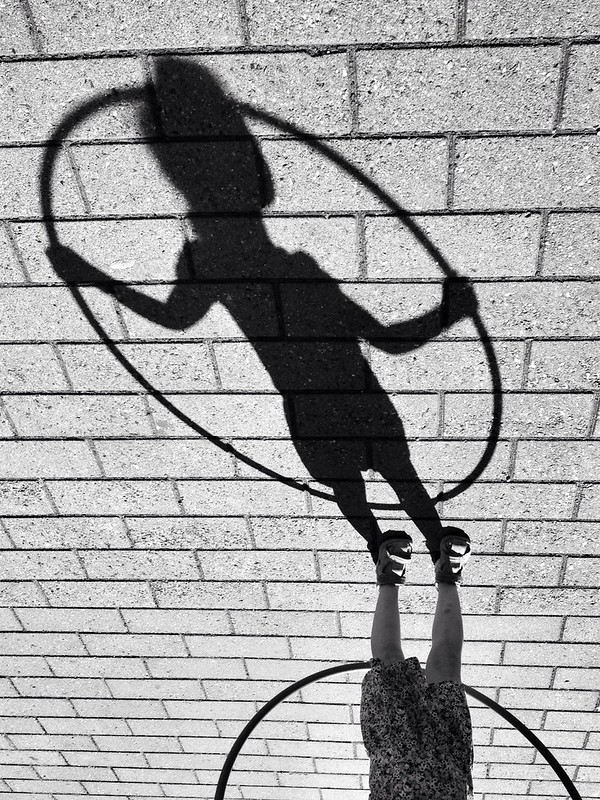 Backstory: The shot is of my youngest daughter. We were at a playground and she found a hula hoop ring and started playing with it. After some time she put it on her head still holding it with her hands. When I saw the shadow I quickly grabbed my phone and took a few shots before it was too late. 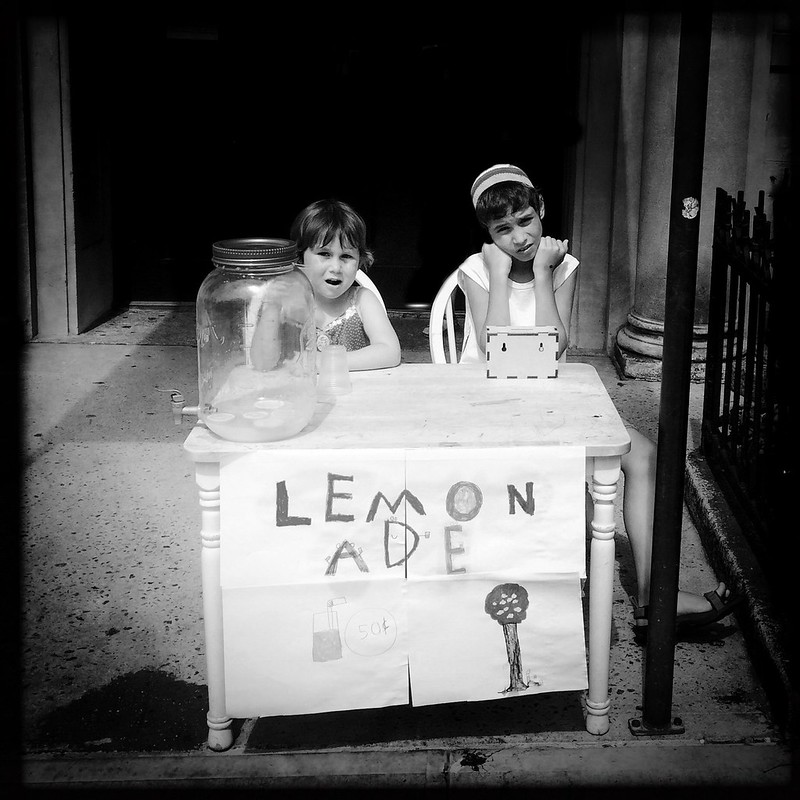 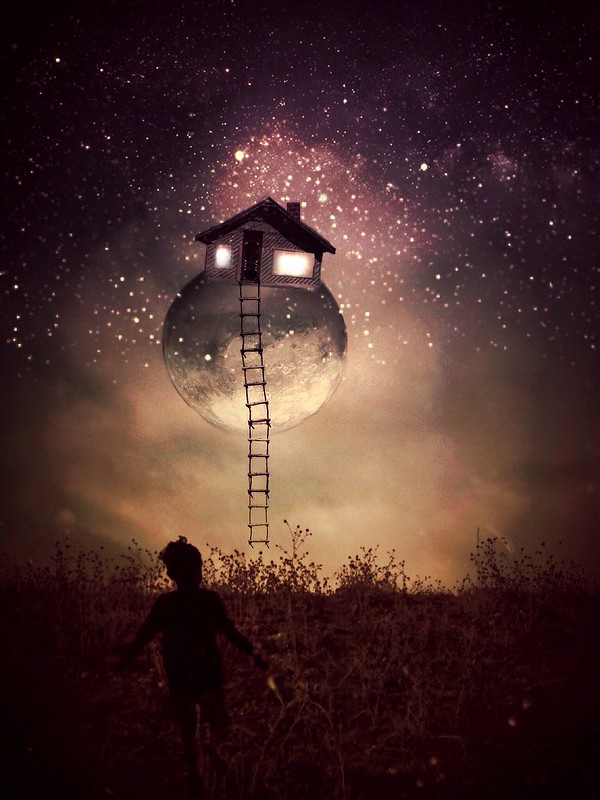 Backstory: On this particular piece I started with Superimpose to make the composition layout for the atmosphere of a reality of galactic star dream. Next step I used Alien Sky to create the stars, and light effect in the house I used Repix with Stain pen effect. Blending the night effect and focus more on the moon I used Snapseed. For my final representative touch I used Stackables to give texture of a painterly effect. 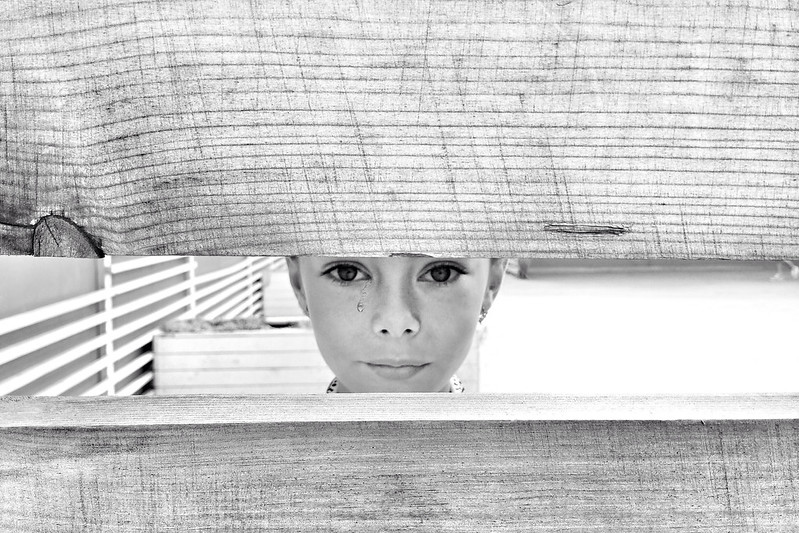 Backstory: The photograph was made ​​during the holidays. The photo shows my daughter. I really like the black and white photo. I used to edit and iphone applications: Camera Awesome and Facetune. 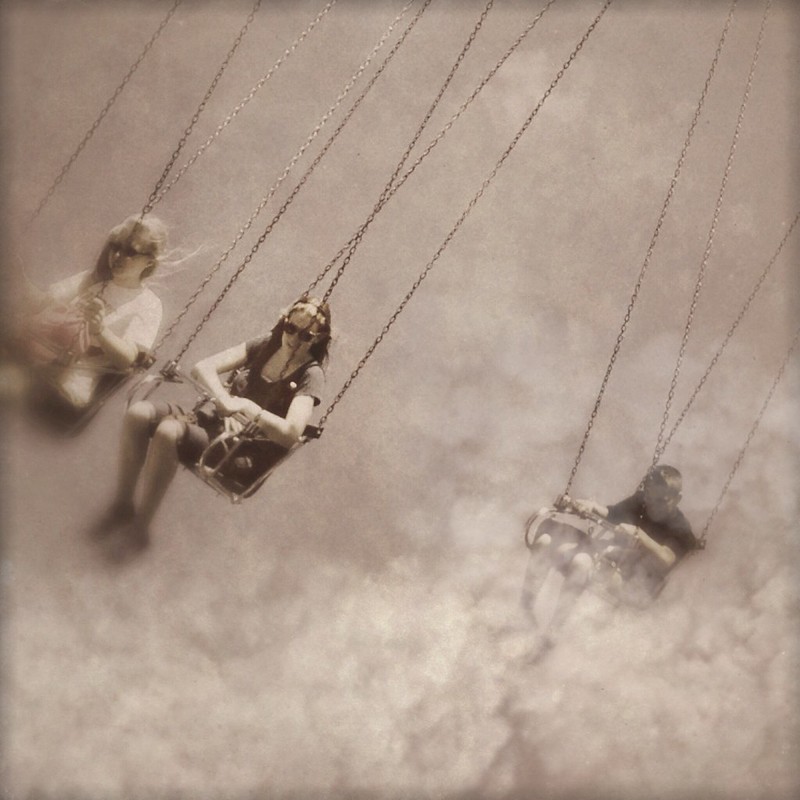 out of his league by Janine Graf

Backstory: Back in Washington State I took a ton of carnival / fair swing ride shots at the Evergreen State Fair. What’s really fun to do is crop certain clusters of riders out and see if there can be a story behind them. You can’t tell what these people look like until they are cropped close, so that’s part of the fun. As soon as I cropped these three I immediately thought of the awkward teen years; those two girls so pretty and popular, and following on their heels is this awkward boy, kind of hunched over and looking shy. I decided to make him even more invisible to these girls by using VFX Studio to encase him in clouds. I wish I had had a cloud cover during my awkward teen years! 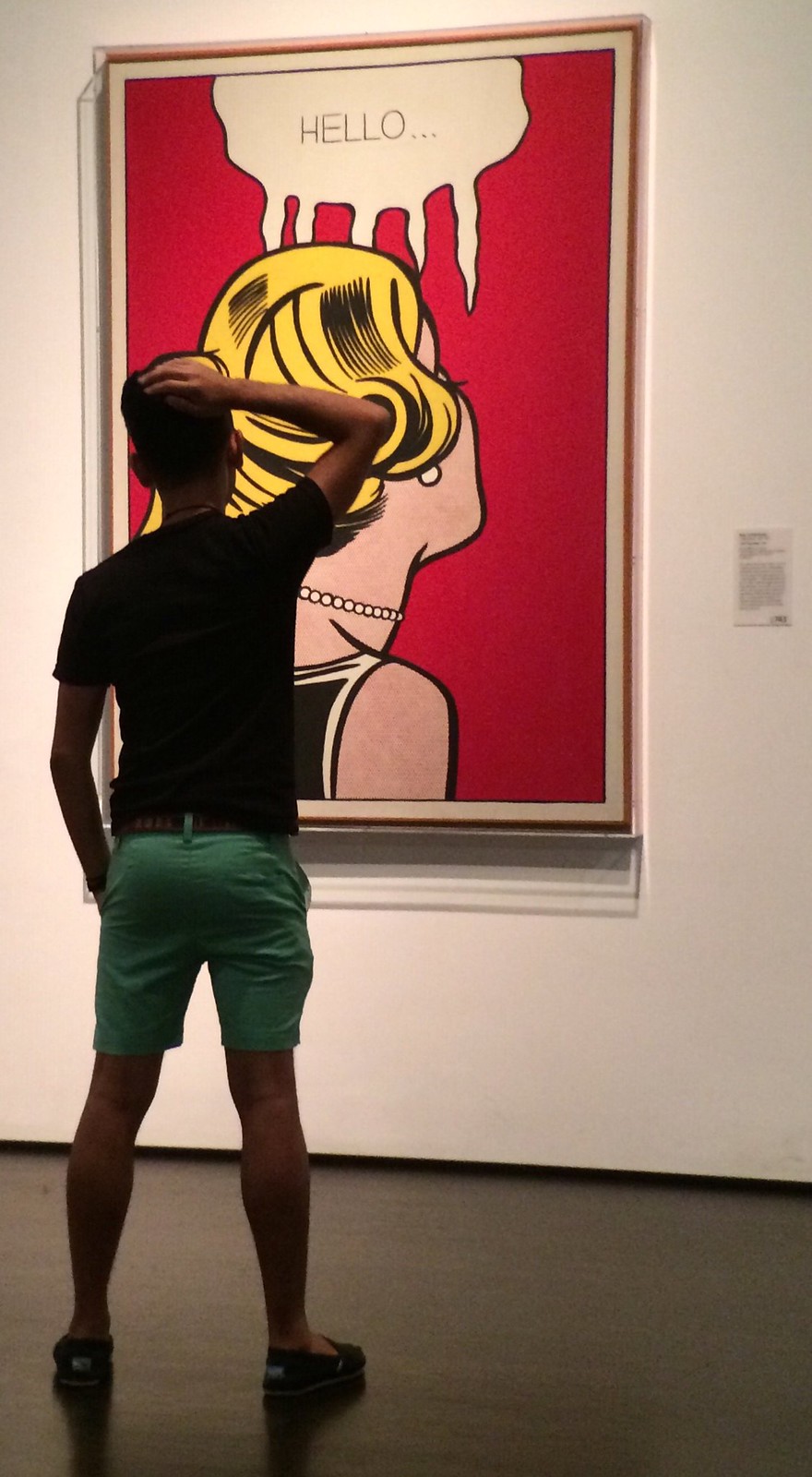 Backstory: The photo was shot at the Los Angeles County Museum of Art. When I walked into the gallery this photo was in, this young man was posing for his friend. I couldn’t help but take advantage of the moment.

Backstory: Portrait of my son 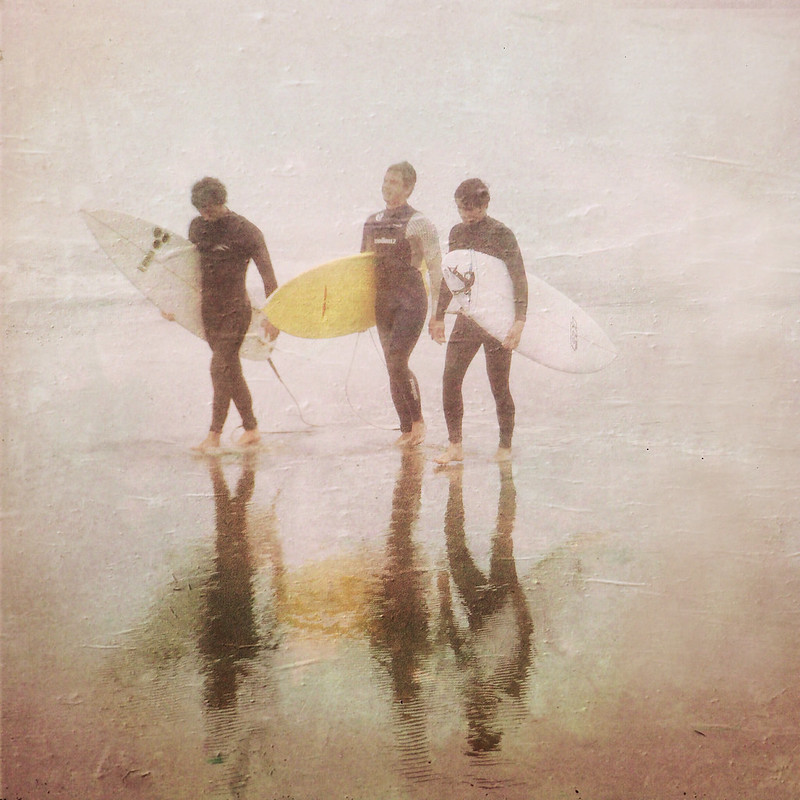 Surfers No. 50 by Petyr Campos

Olloclip zoom lens. Lens had a fingerprint, which softened the image.
I took the image into Filterstorm to increase the contrast and clone out the fourth person.

Backstory: i have been taking pics of surfers for about a year and a half now. I like photographing on the beach and surfers are a big part of that. I try to bring my own unique style to surfer images that hopefully is different from what most people see out there.