This week’s Apps Uncovered presents my selection of images from our Flickr group this week that suggest the arrival of the winter season – those that I found singularly interesting (hence the title), and often (but not always, representing single individuals. Of course, the exception makes the rule.

This week’s lead image is Welcome to the Colony Hotel by ritacall. The image has the mysterious and luminous vintage quality with bright colors and evocative details. Just a lot of fun and teasing to the eye. Clearly, the woman on the left is not contemporaneous with the credit card reader on the right – but so be it – all the more tantalizing.

Welcome to the Colony Hotel by ritacall

Apps used and backstory: I decided to create a composite with a vintage woman photo which I obtained from an online source. I painted her in procreate. I added layers to the image which suggested a story line and echoes of the past. Apps used were procreate and Icolorama. Shot with Iphone6s+. Backstory of image: while in Florida I visited the old Colony Hotel in Delray Beach, built in 1926. I found myself going back there several times, overwhelmed by the history and nostalgia of the place. I photographed the empty check in desk in the lobby which reminded me of a Dennis Hopper painting 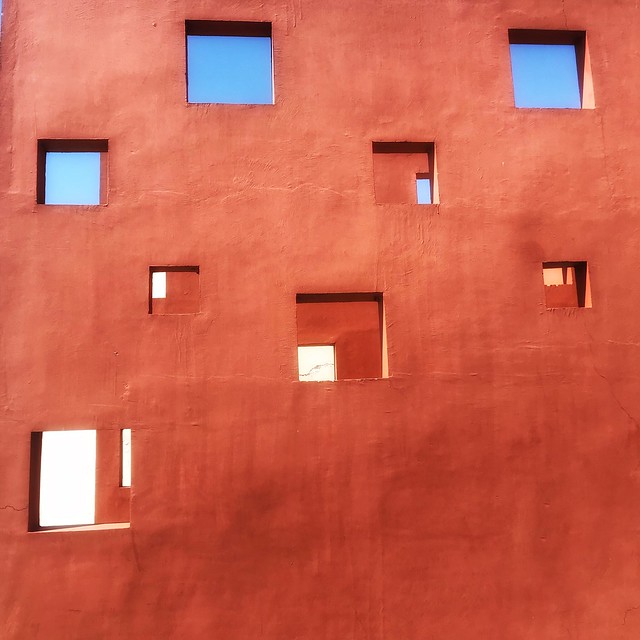 Apps used and backstory: A modern University campus is always full of photo possibilities, more so if the campus is in India. I found this wall near the campus stadium and tried to align the squares. aving failed at that, I decided to take a less symmetric approach and it worked.
I shot with the default camera app on an iPhone 7plus and edited in Snapseed.

Apps used and backstory: This is part of my Grand Central series, during this series I placed the camera directly on the floor and shot using the camera app Camera Reflex. I shot as people were walking past me. 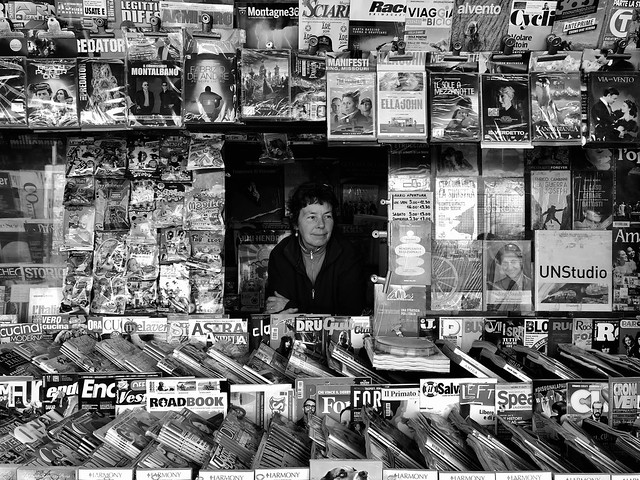 App used: I shot it with my iPhone 8 Plus and processed in Snapseed.
Backstory: A newsagent with a very fair and hospitable mood. 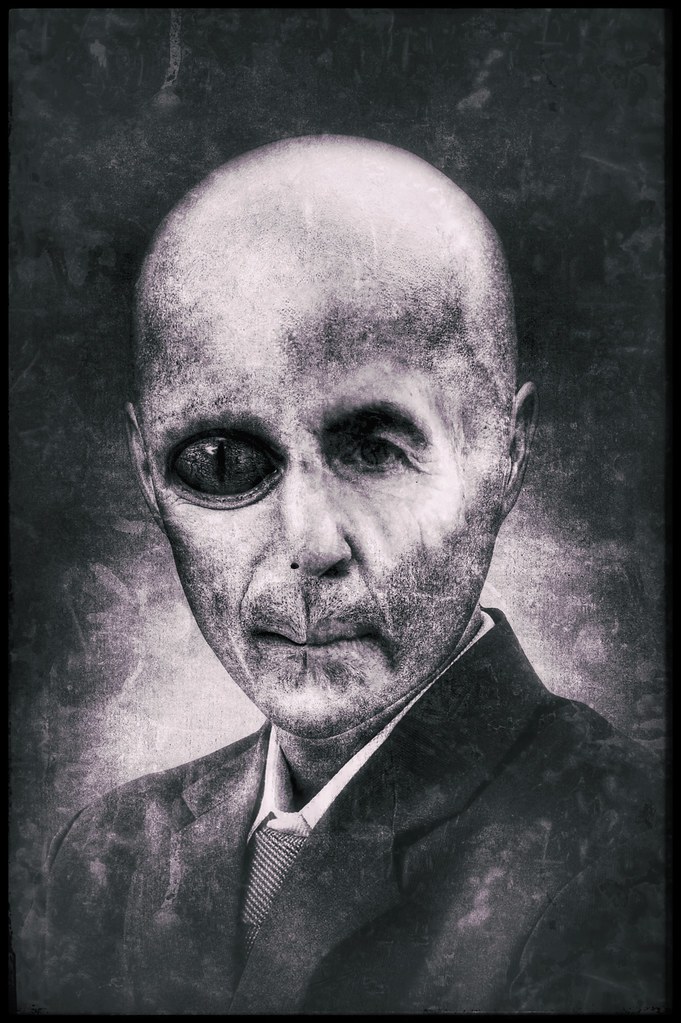 The Truth is in Here by aka Tman

I have been doing a lot of selfies before selfies became a new word for the digital age (yes I’m very old). It was a new friend on seeing some of my latest faces that combine half my own face and half of whatever takes my fancy, that she wanted to see an Alien aspect of me. if I don’t have anything of my own,the go to app is Pixabay where I usually find something that tweaks my interest. Prior to putting the two images together, I converted my color pic of self into black and white in Snapseed.

Next I overlapped the two images in Juxtaposer and erased half of my self and made a number of adjustments to match and line up with the Alien side using various tools available in this app.

Snapseed is where I can do the final touches with all the tools that this app provides. From what was a relatively “ clean” image I was able to transform it into an “aged and dirty” look and give it more depth using the Grunge filter and Noir. To contain it all I use the Frame tool for a little edge and off it goes to the Flickrverse.

Having a good deal of interest in the possibility of Alien intervention (ongoing) in the scheme of things I was well pleased with the result. 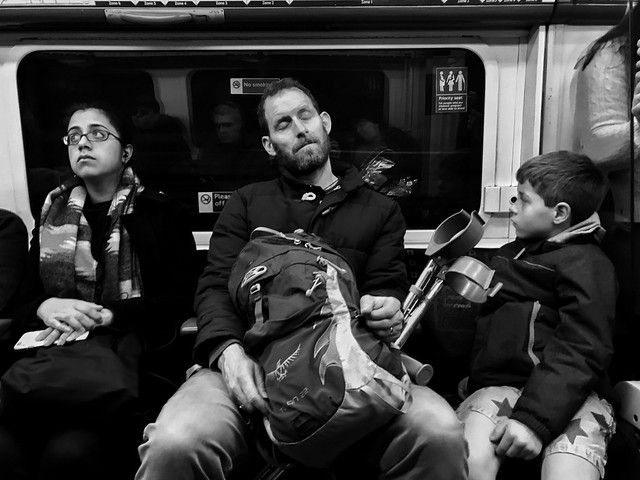 Exactly That Moment by Rob Pearson-Wright

Apps used: Just Snapseed to give a little nudge to all the options in the Tune Image tool. Then a conversion to black & white in Snapseed too and save to camera roll.Job done!
Backstory: Travelling back in to the centre of London on the Underground/Tube the passengers opposite me were very expressive and the carriage was relatively empty. So I thought there might be an opportunity for a shot. I got a few shots off and managed to catch them all lost in thought. We all have a method of zoning out on the tube. These are just a couple of examples. 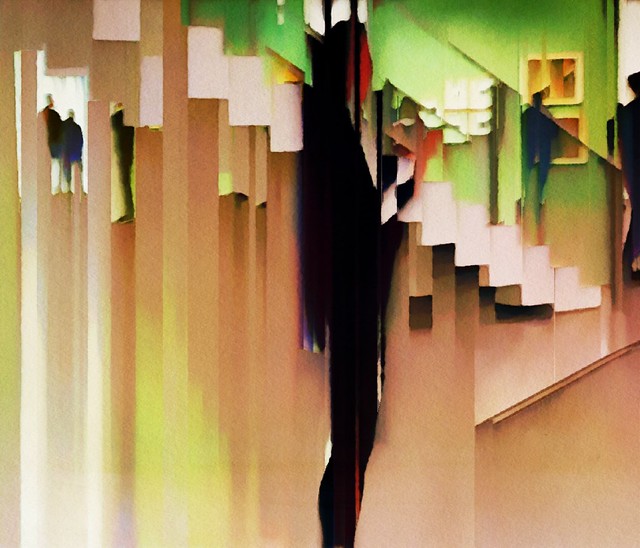 Woman and Stairs by Karen Axelrad

Apps Used: SlowShutter, iColorama, Snapseed, Aquarella, SuperimposeX
Backstory: I enjoy taking long-exposure photos at museums with the SlowShutter app. This time I wanted to experiment with the result so I imported it into the iColorama app for some color tweaks and a form preset for the verticality. Some color and painted effects were done in Snapseed and Aquarella and several versions were blended in SuperimposeX. The people, the stairs, the paintings on the wall are still recognizable, but a new imaginary effect is achieved.