Colour dominates the theme in this week’s apps uncovered with René Valencia’s highly coloured and striking image “Girl in red” taking the lead post this week.

Strong colour kicks off the gallery this week. Colours will behave according to the colours around them and your colour subject will jump from the background if the surrounding area…or negative space is desaturated or monotone as illustrated in Luis Fernandez’s urban scene “192 / 366” and Jenneke Tesselaar’s “B o u g a i n v i l l e a.” Notice how the images by René Valencia, Julia Nathanson and Dariusz Sobiecki make great use of contrasting primary colours, red against yellow, blue against red and  yellow against blue creating a strong visual impact.

Also, for good measure and some superb expressive photography, I have included some outstanding black and white iPhoneography this week from Luis Fernandez (see his colour image too!), James Green and Kristie Benoit.

To find out more information about each image, roll your cursor over the photo. Also, click on the image to find out more about the artist’s work on Flickr.

Thank you all for sharing your wonderful images on our iPC Flickr group and wishing you all a great iPhone shooting and editing week!

Please remember to list at least your “apps used” to be included in the gallery. This is the minimum requirement. 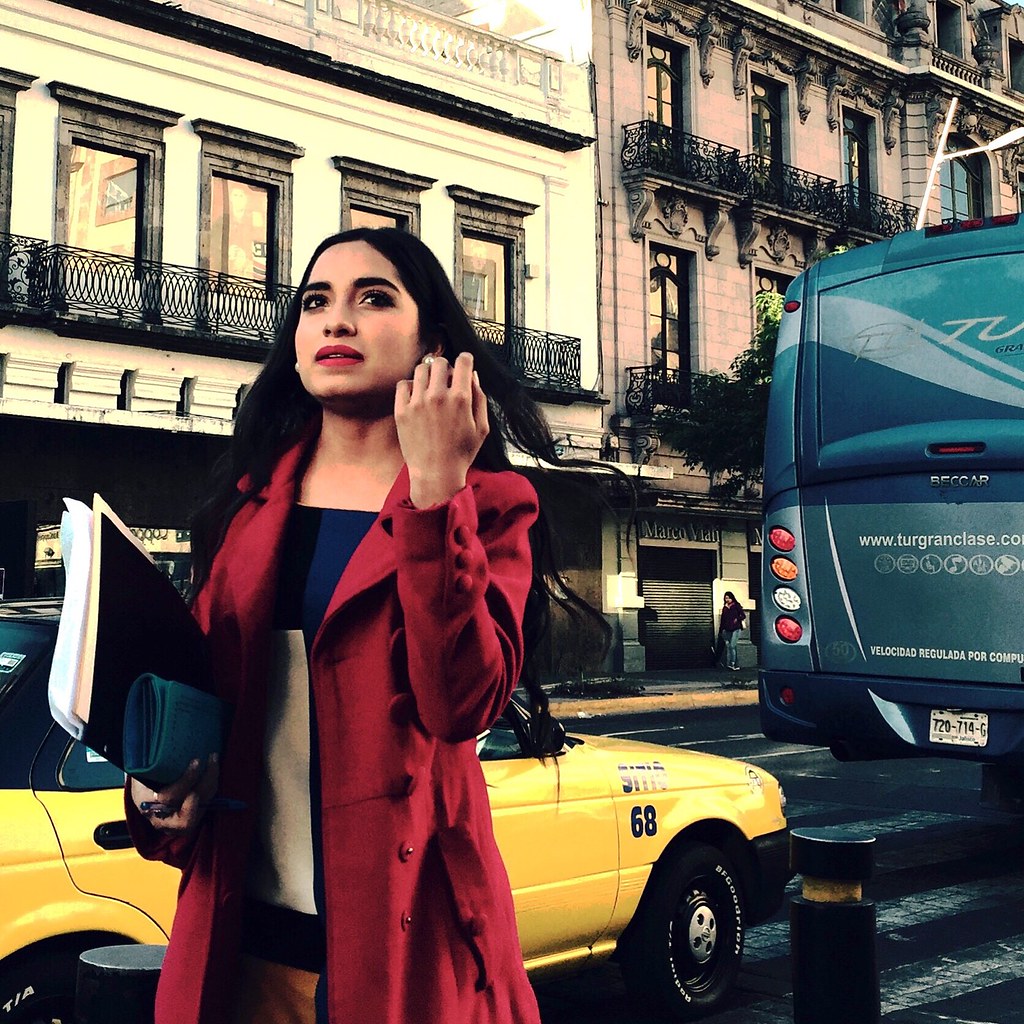 Apps used: The photograph was taken with the native iPhone camera, then I cropped it, straightened and applied some contrast with Snapseed. To end it I passed it through the chrome filter of Camera+.
Backstory: I was walking in search of images along an avenue when suddenly I saw a girl with a striking red coat approaching a taxi. The contrast of colors caught my attention. I did not know if she was going to raise or not, so I started shooting as I approached it. She did not aboard the taxi and pulled towards me. So I managed to take a picture closely while she was putting a face of uncertainty, like she was thinking what other ways had to get to her destination. 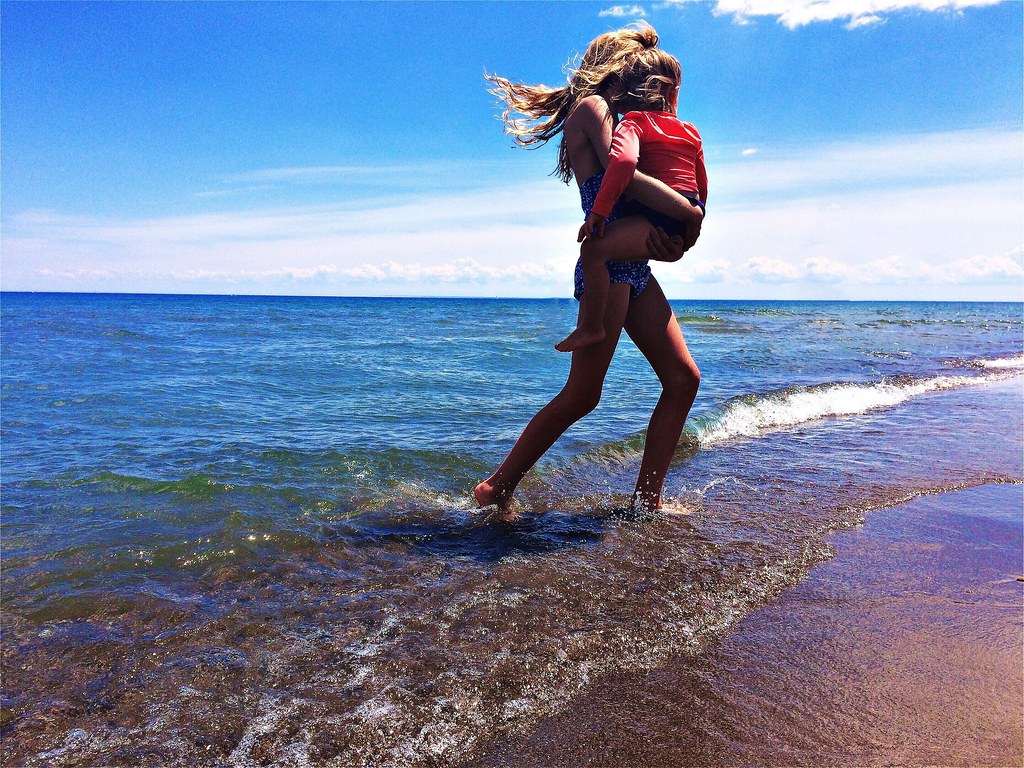 Apps used: The photo was shot and edited with Hipstamatic.
Backstory: This is my older daughter and her littlest cousin at the beach in Toronto. 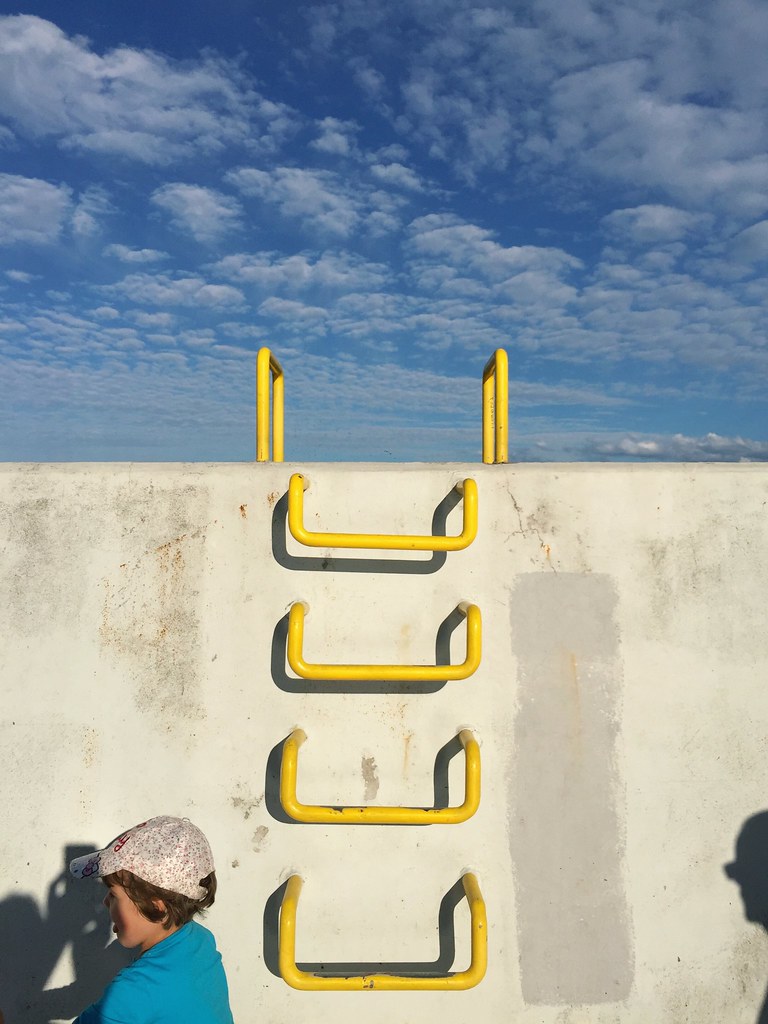 Apps used: Snapseed and VSCO.
Backstory: It was a Sunday afternoon, rather towards the end of a photo session. Although I was capturing the life and views around me, I knew I wanted some shadowplay in golden hour light, not only because there was another challenge with such a theme but, also, because I love soft, pastel colours.
I went to my favourite spot at a Gdynia marina, Poland; a place where I took one of my best images of 2014 in similar light conditions. Composing the skyline, marina wall and metal ladder is attractive enough, but I changed my mind seeing walking family with a running kid. Pretending my focusing on the mentioned frame, I was waiting for the right shot. My “street” instinct took over !
In effect, I was happier than expected. The play of mine and the kid’s shadows made the frame richer in meaning, but the presence of the child’s father’s shadow added so much more to the final image. Most of the edition was made with Snapseed, but some touch of mood to the tone I added with VSCO. 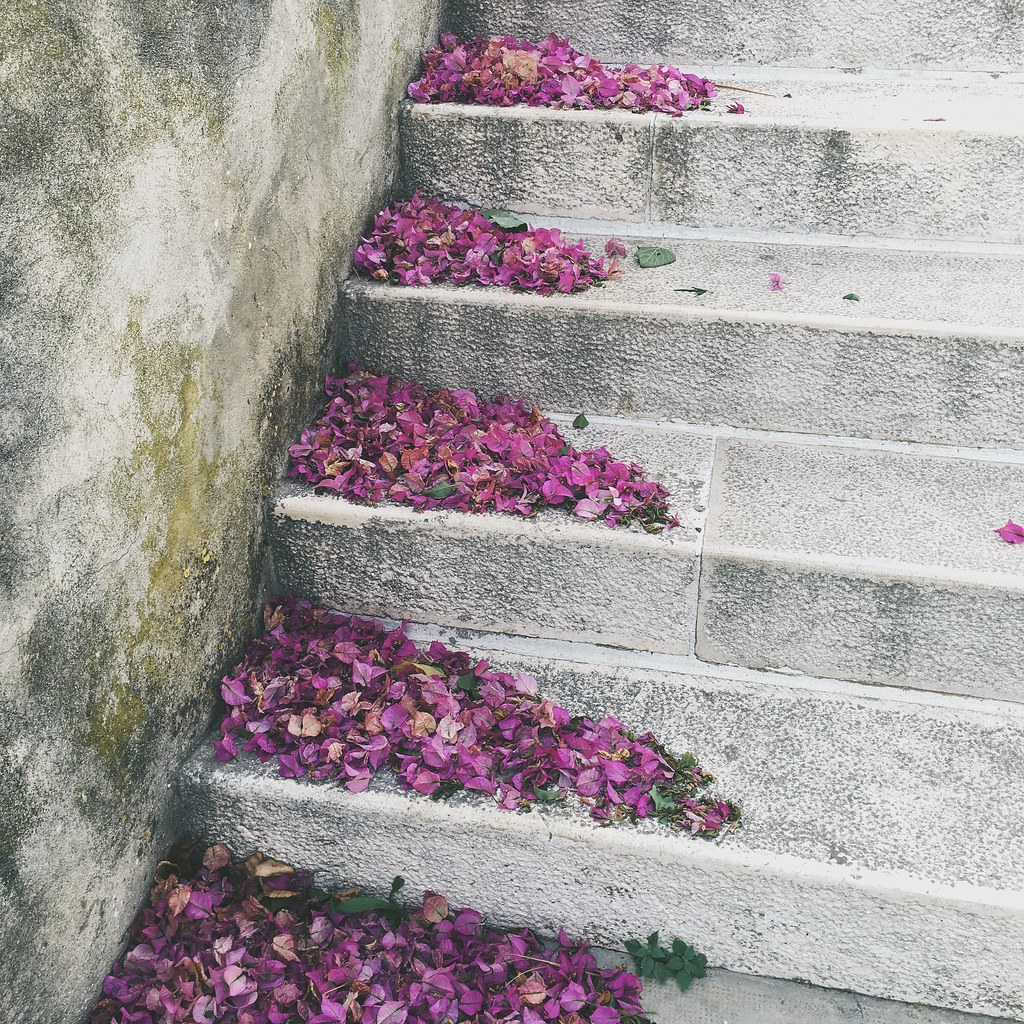 Apps used: Snapped and VSCO.
Backstory: I took this photo last month during our holiday on the beautiful island of Hvar (Croatia). One day we had very stormy weather so instead of going to the beach I spent the day taking pictures. The wind had blown the petals of the Bougainvillea on the stairs to our apartment creating this pretty scene. 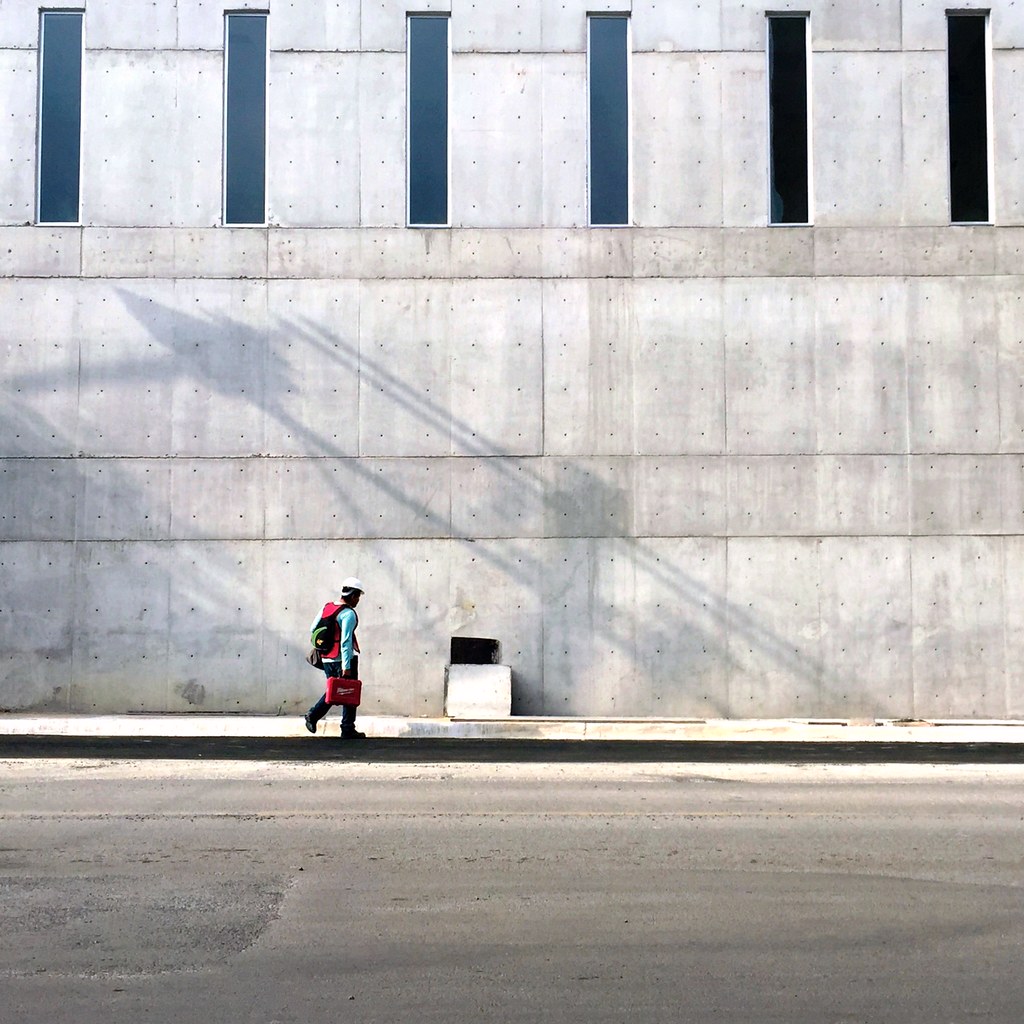 Apps used: This photo was taken with an iPhone 6 and edited with Snapseed.
Backstory: I aligned, cropped and enhanced some parts of the photo to emphasize textures, color and structure of elements. This is a building under construction very close where I live. Once I stopped my car and from the other side of the street I start shooting the architectural highlights of the building and the construction workers. I like this one because the colors pop against the almost monochromatic background. 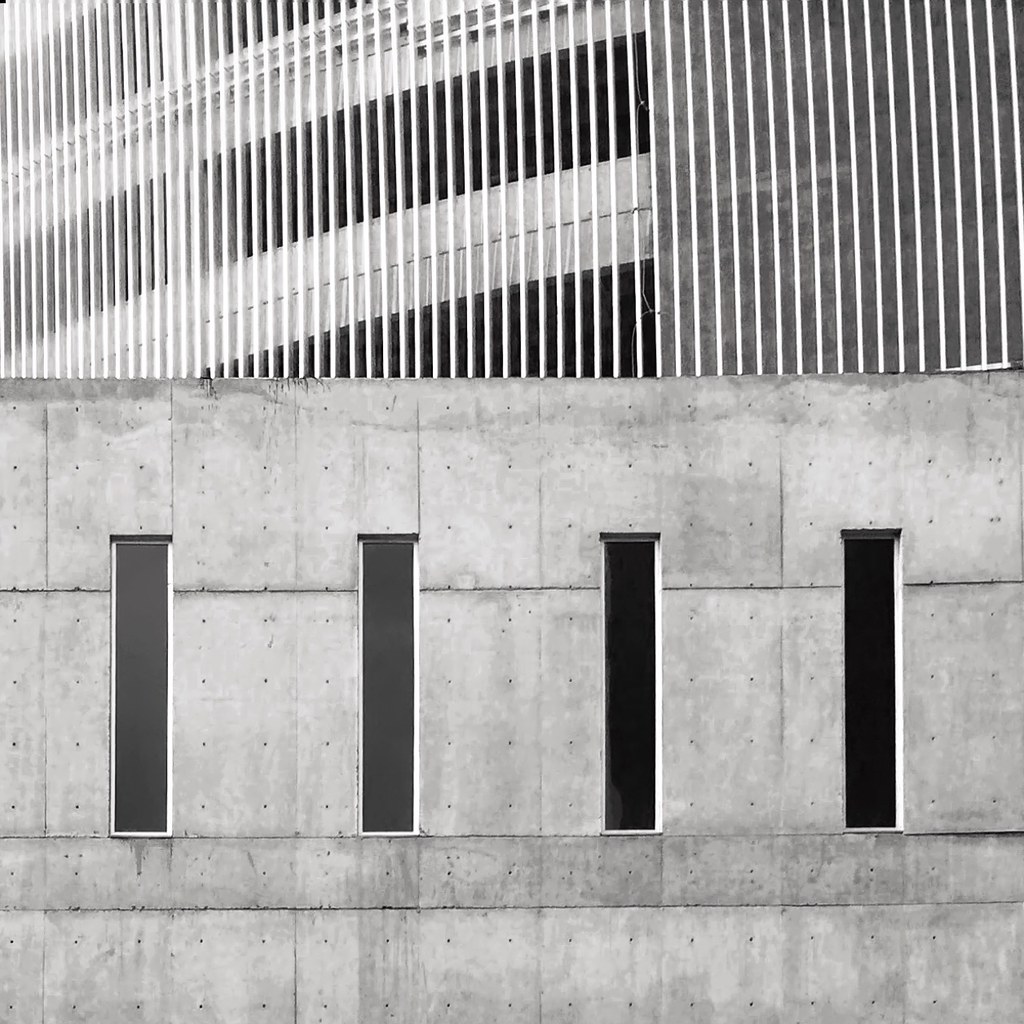 Apps used: This photo was taken with an iPhone 6 and edited with Snapseed.
Backstory: I just aligned, cropped and enhanced some parts of the photo to emphasize textures, color and structure of elements. This is a building under construction very close where I live. Once I stopped my car and from the other side of the street I start shooting the architectural highlights of the building. Because of the almost monochromatic color I decided to convert it to B&W. What I liked the most was the geometric an repetition of shapes. 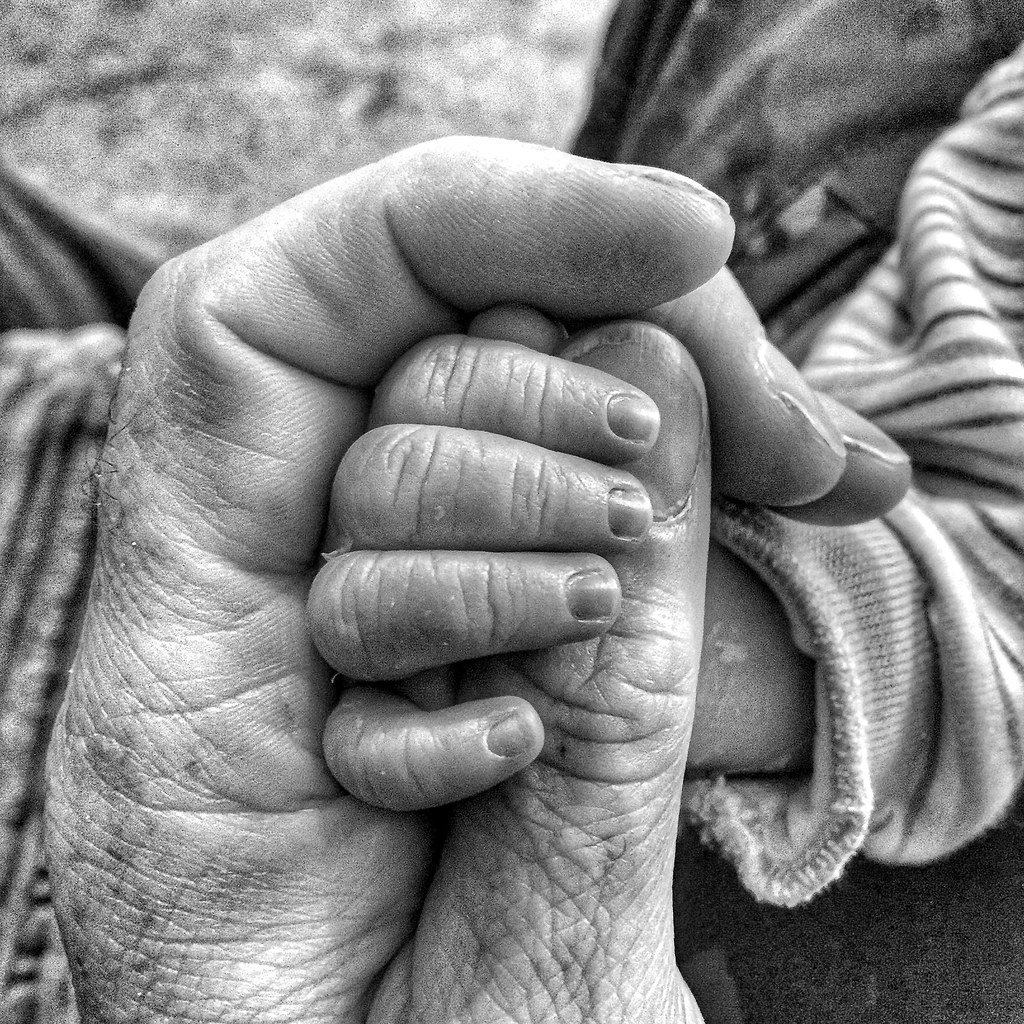 Apps used and backstory: The image is of my new born son Finley holding my thumb and I thought what a beautiful moment it was. I used a iPhone 6 to take the photo and converted it to b/w using Snapseed. Thanks again James 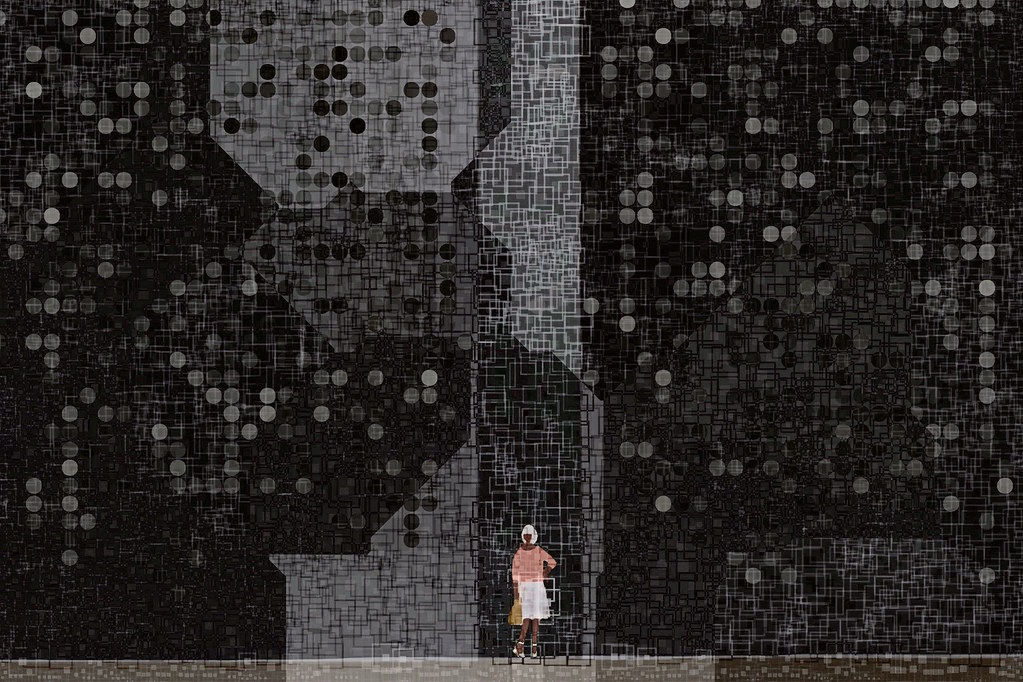 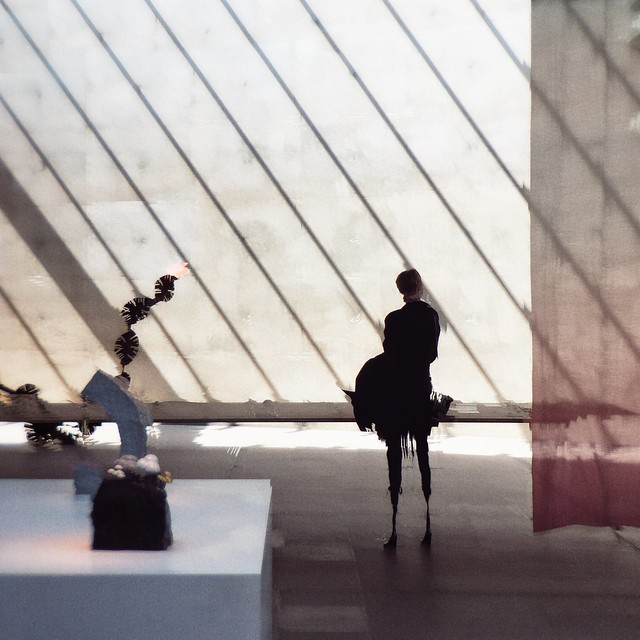 days of roses, poetry and prose by Alan Kastner

After capturing this photo with Slow Shutter Cam, I did just a little processing to achieve the final result. The first step was to use Superimpose to extend the diagonal lines in the upper left so they reached all the way to the top left corner. (A little bit of the ceiling was originally peeking into the frame there.) I then made a slight adjustment to the perspective in SKRWT, added a small amount of tonal contrast in Dynamic Light, (about +22), applied one of Snapseed’s “Grainy Film” filters, and also added “Structure” (+6) using Snapseed’s “Details” tool. It’s possible that I also applied a hint of vignetting in Snapseed, but I don’t recall that clearly.

angel on platform 9A by Carlein van der Beek

Apps used: Parts of 2 ProCamera photos manipulated as one persona then drawn & painted in Procreate & iColorama.
Backstory: I was waiting at Central Station the Hague for the tram home, when I noticed bright pink shoes appear. I immediately launched the slowshutter app and managed to get one shot. I tweaked and built up the image with SuperImpose (adding the text in the wings), FlowPaper (to give the wings a little oomph), Filterstorm to emphasize the shoes and XnRetro and Rni Film to add some warmer tones.

Apps used: Camera+ and VSCO
Backstory: For this shot, I used my iphone6s and my living room floor. I used Camera+ App for the self timer. I took the image into VSCO for the black and white filter. They’re one of my favorite apps for that. I also used PaintFX blurring, you get good control of it with that app. I finished it up in HandyPhoto, for highlighting and final touches of contrast. This was created out of a collaboration with the words of another artist, Craig Fothers. We create images and poems together. 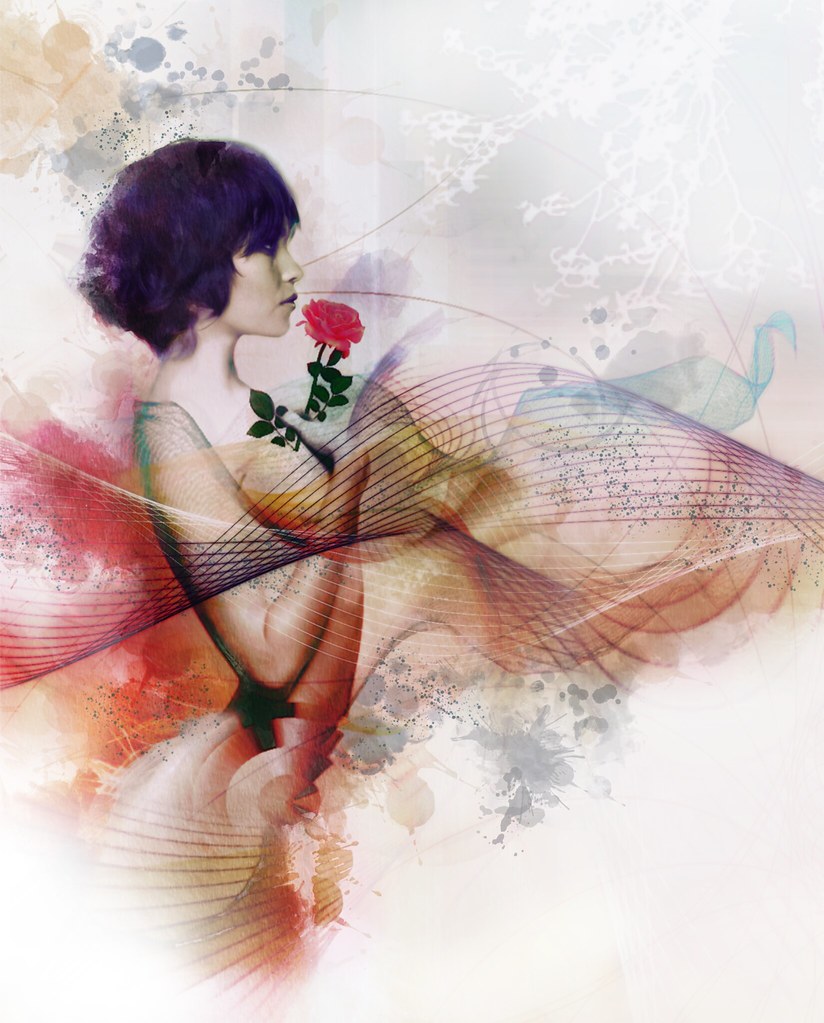 Apps used: Camera+ photos processed using iColorama, Procreate & Flowpaper on iPad Pro with Apple Pencil.
Backstory: I wanted to compose something etherial with this figure which was made from a couple of Procamera shots combined & then warped somewhat. I started with a blank canvas in iColorama. A background was added which is later somewhat removed. The figure was then superimposed & a rose added more as a center of interest. Flowpaper was used to add the veil like effects as was an iColorama grid pattern that follows the Flowpaper effects. The background was reworked by adding some watercolor effects using Procreate & iColorama. Some tree limbs were included using a blending mode that made them appear white for more textural interest. Lastly I incorporated an overall warmer tone quality in iColorama.