This week’s Apps Uncovered presents a selection of what I found to be the most intresting images for the week in our Flickr group, across a wide range of styles and subjects – but with one common theme – a sense of the unreal that predominates in either the subject matter or creative method.

This week’s lead artwork, “You Can’t Control An Independent Heart” by TheiPhoneArtGirl (Meri Walker) is a delightful abstract that you can explore for hints as to what is “meant” or depicted for a long period of time, enjoying each minute. The bright colors, interesting shapes and textures draws the eye again and again. 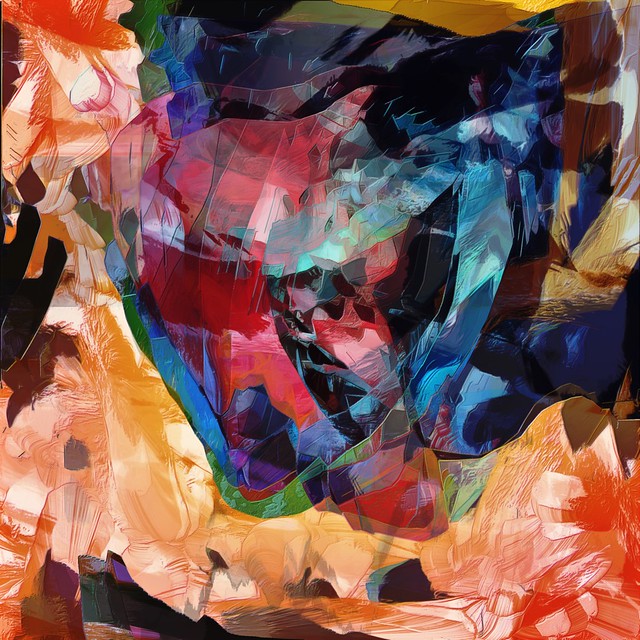 You Can’t Control An Independent Heart by Meri Walker, iPhoneArtGirl

Apps Used: Oblique Camera+, iMaengine, iColoramaS, Decim8
Backstory: It’s winter in Oregon and the weather hasn’t been so friendly for outdoor shooting, so I’ve been making more mobile artwork indoors of late. This piece started with a fun closeup of some shapes and colors I painted on my porch table last summer. I abstracted the detail using iMaengine and then started building the image by layering variations over one another and accentuating textures that showed up in that process using iColoramaS. ( I made this image all in my iPhone 8+.) I used Decim8 to find a little digital noise that would help hold all the line forms and vivid colors together. The process went on all afternoon Monday. About halfway into the play, I started hearing Sting singing in my head and realized that I was chanting silently right along with him as the image came together, “You can’t control an independent heart… “ I don’t begin to understand how my synesthesias work, but I do know they are central to my creative experience. Once I started singing out loud with each new edit, it became clear I was making myself a Valentine for 2019. It’s made me happy that so many other mobile and digital artists have enjoyed the piece along with me this week. 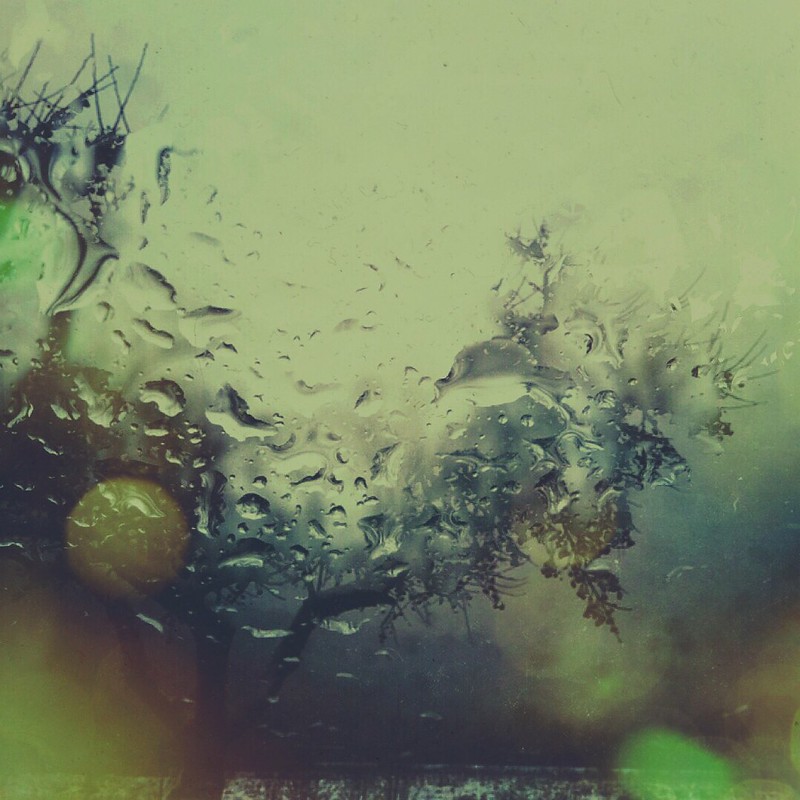 Apps Used: Mextures and Afterlight
Backstory: This photo was taken in a parking lot during an ice storm. The distortion was so good to me I really didn’t want to alter the focus or texture so I just played with the color and really was pleased with the yellow tones that resulted using Mextures. The further light leaks and bokeh were added using Afterlight. I typically use the same few apps now as I have my own little process to get an almost vintage feel to my work. The car windshield has been a reoccurring tool in a lot of my present work, and weather also helps inspire me and adds mood. 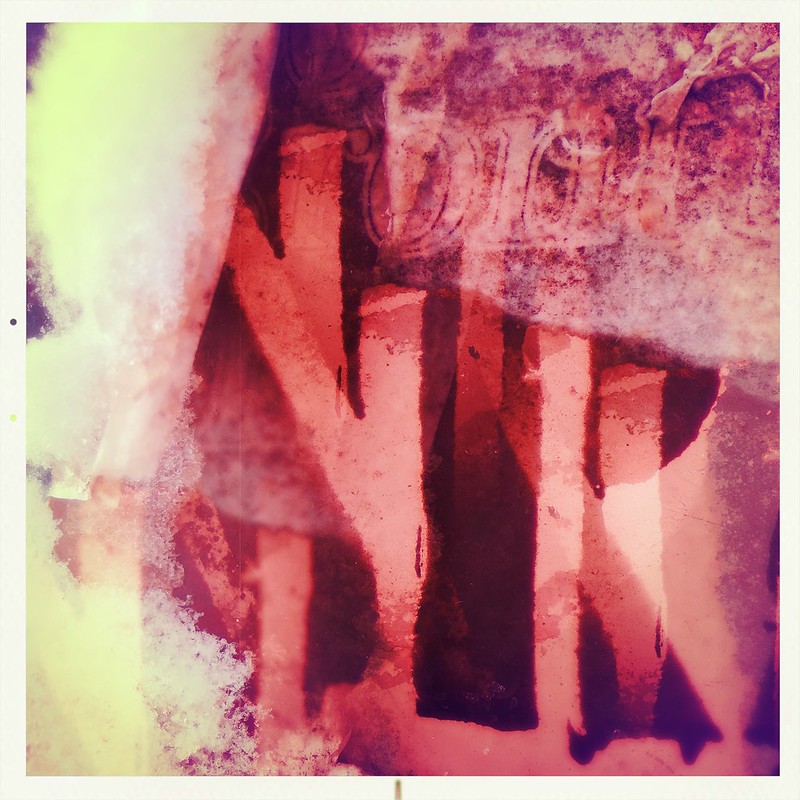 Apps used and backstory: This picture was taken with the Hipstamatic app, using the Kally X3 lens and the Alfred Infrared film. The motif is a torn poster on a lamppost. 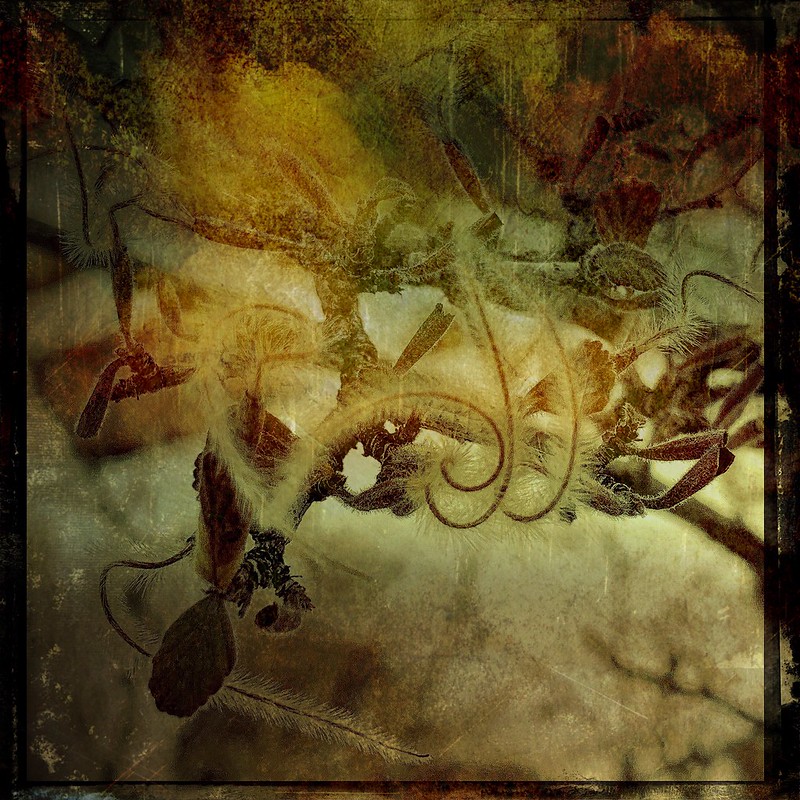 Beauty in the Small Things by Kate

Apps used and backstory: It was a cold snowy day when I decided to go to a place where I’ve hiked often and photographed many times. The landscape is bleak even in summer but for some reason, on this particular day, I decided to look closely at a natural stone wall and the plants around it. I saw this small bush and decided to use Camera+ close up, which I haven’t used in a long while. I was delighted with the image and processed it with Hipstamatic and Distressed FX+. The Hipstamatic combo applied first is Stavros, Cano Cafenol, Purple Raindrops

Apps used and backstory: The image is part of my “Portrait of a Woman” series started in 2016. All of the images in the series are blended and manipulated combining self portraits with environmental elements, such as trees, lakes, clouds, flowers. Portrait of A Woman: Negativity is a blending of a self portrait made with the app Blackie and a capture made with Hipstamatic. I used IColorama. 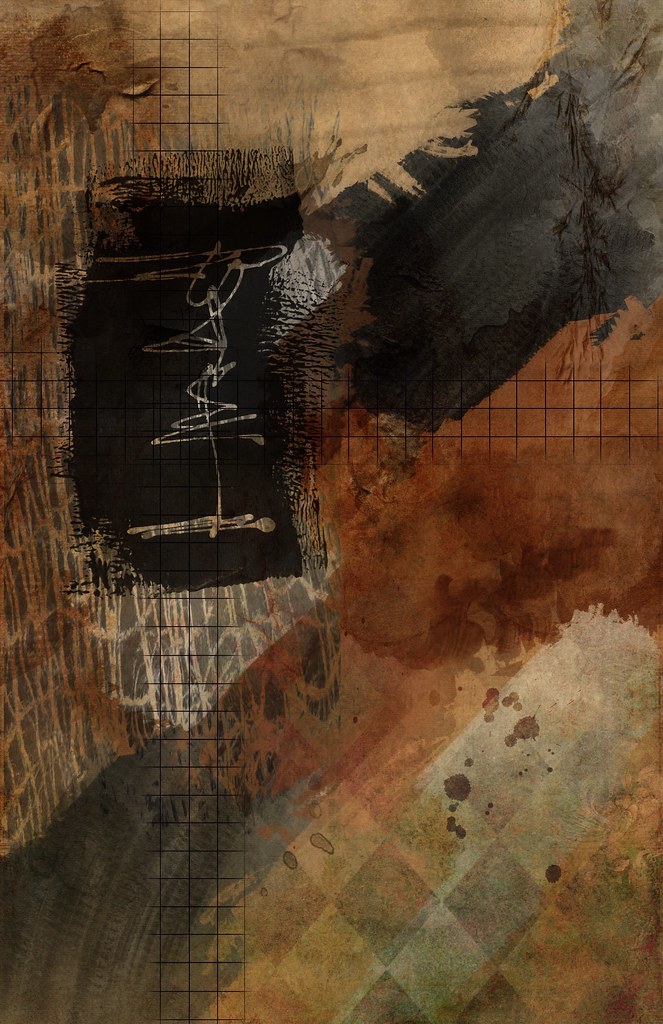 App used: Procreate
Backstory: This App allowed me to create this project. From a blank canvas I paint the background using some random brush strokes and and a neutral pallet of colors. Then still in the same app I blended some textures and elements from my own collection and some from the internet to complete the piece. I am pushing my work latelly more and more to be abstract and using some Mixed Media, that I will be creating myself and from free internet resources. 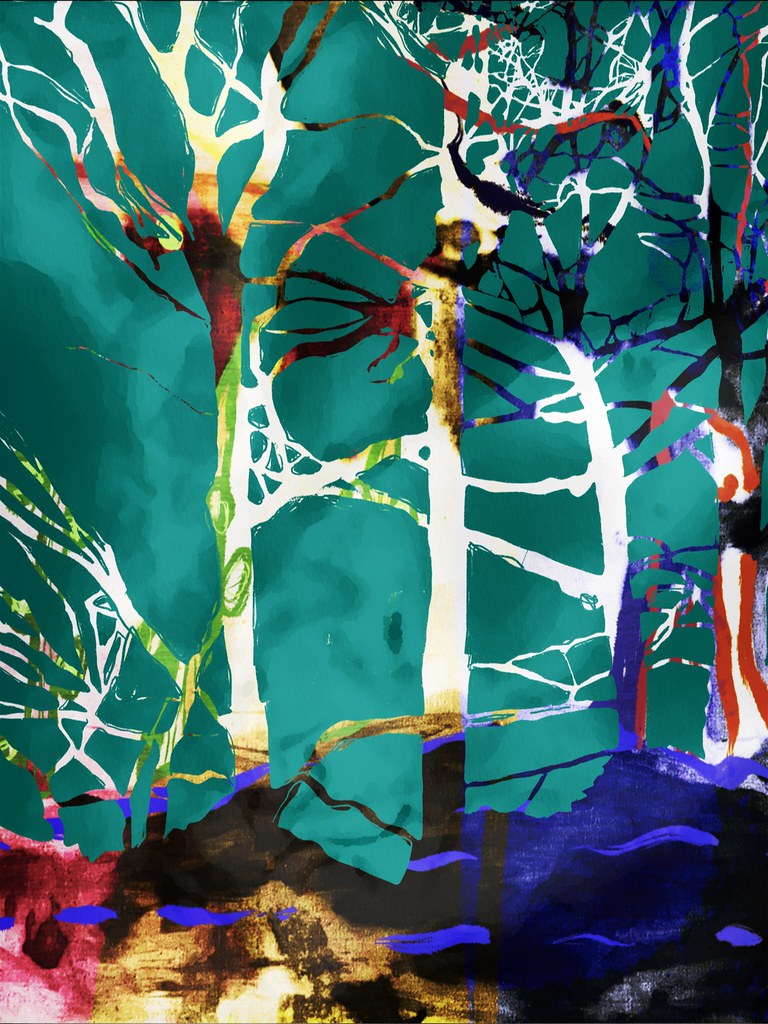 The Forest and the Trees by Barbara Braman

Apps used and backstory: This image was created mostly in Procreate, using two of my iPhone photos. I had made a silhouette of some trees in my yard to use as a mask. The tree colors are from a very painterly abstract I made from a photo.

Combined the two images, create an odd feeling for me. The trees seem to dissolve into a new, undefined landscape, yet at the same time they remain trees and hold the hard edge of the landscape. 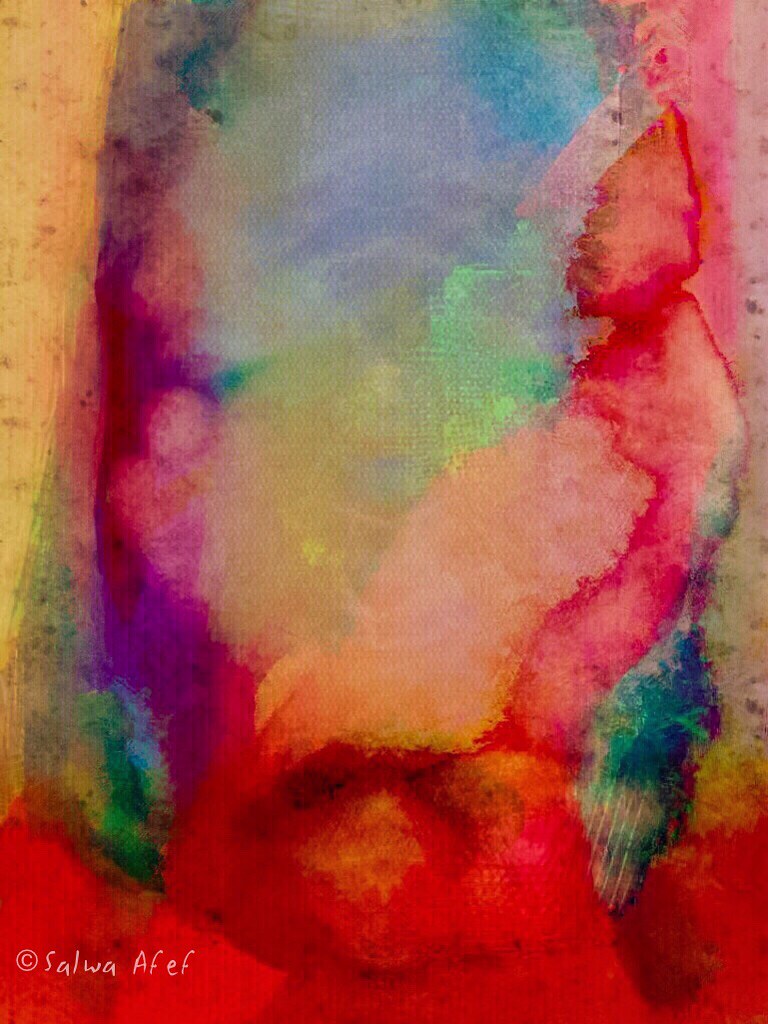 Apps Used: Slow shutter cam + iColorama + iWatermmark.
Backstory: facial features are disappearing and we are facing what is beneath, we get that expression, we feel it but we don’t know how to name it! I was trying to capture and paint that undefined attitude! 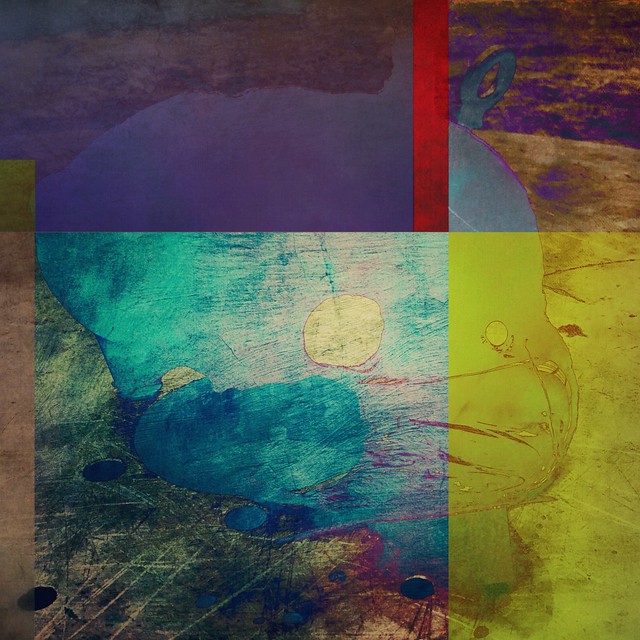 Apps used and backstory: Apps: Native iPhoneX camera, DistressedFX, Brushstroke, SuperimposeX, Formulas. This piece is a part of my ongoing environmental texture series. The base image was a paint spill on the concrete floor at my local Lowe’s, which I then manipulated in Distressed and Brushstroke to create various versions. To offset the random shape of the spill I layered onto it a grid of colors and other texture images from my archive. 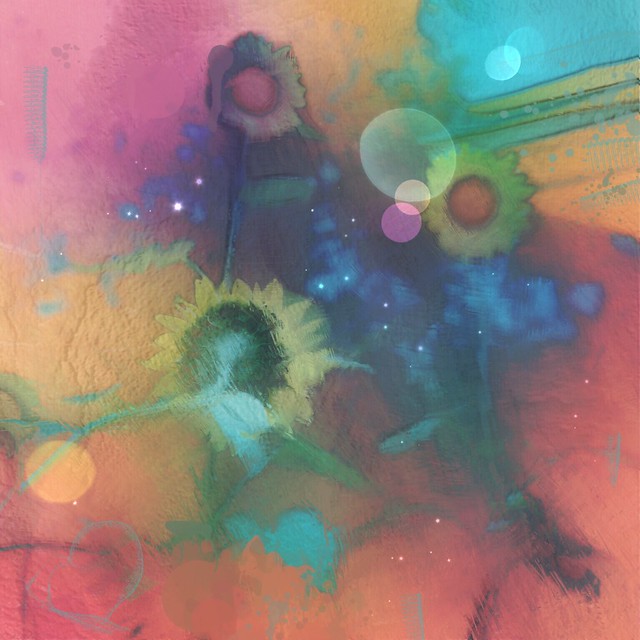 Apps used and backstory: Made with Repix (repix.it) , Diana app, iColorama. Memories of the garden that my late dad took me to buy everything for. He and it will forever be missed