This week, I invited images that spoke to me upon first viewing. A bit like love at first sight. But the more I look at these small pieces of art, the more I like them. Not at all a fleeting, over in the wink of an eye holiday romance. I hope you feel the same way. 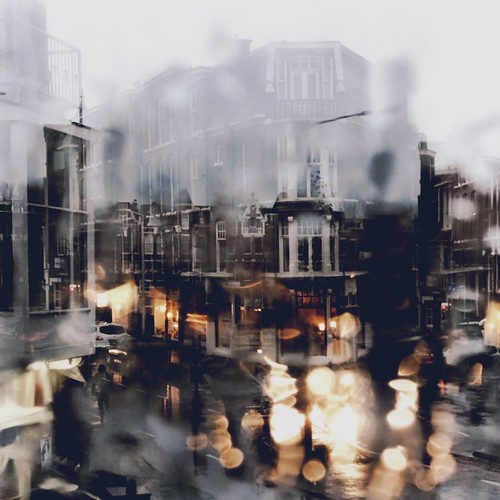 Apps Used: Double exposure in Hipstamatic, the Venice pack. I just removed the border in Hipstamatic.
Backstory: It has been raining and snowing and raining non-stop the last ten days.
And I happen to have the most beautiful view from my alcove. I live on the second floor in an area in the Hague that was built in 1904. Turrets, alcoves, no high rises, stained glass windows, ornaments, chimneys… the works. That, in combination with the melting colours in the rain, made for a great opportunity for some double exposure shots.

Apps Used: This photo was taken with an iPhone 8 Plus and edited entirely in Procreate.
Backstory: It is one of a series of mannequin images that I’m experimenting with at the moment. 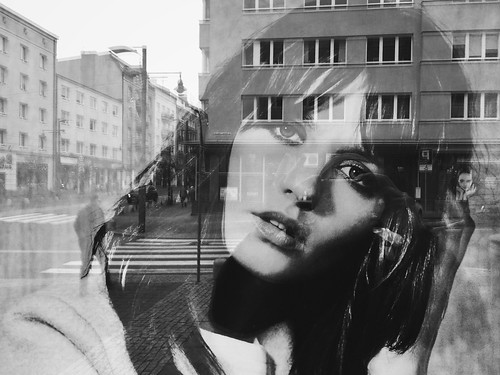 Apps Used: Shot on iPhone 6+ and edited with Snapseed and VSCO
Backstory: My dominant subjects of creation are street photography and architecture, often with a conceptual approach. That’s why using shop display reflections is one of the “tools” I employ quite often – apart from giving additional meaning, they often accentuate city life atmosphere.
That spot was also an occasion for a sentimental return to my previous successful captures, taken in the same area several months ago. It’s interesting for me to see another experience that only time can give. 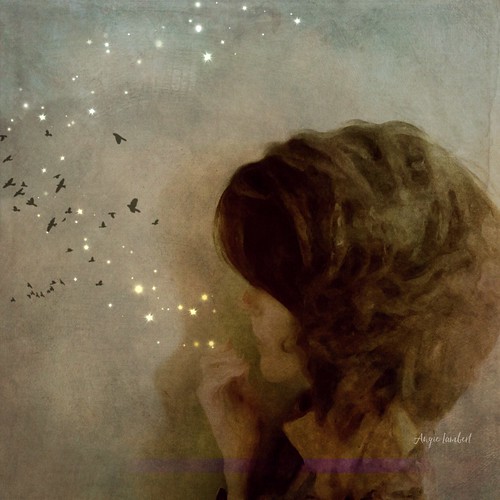 Apps Used: Snapseed, Distressed FX, Mextures, Repix, Image Blender, Over, iResize
Backstory: This image is representing visual transition, Until Next Time. The week filling with several things from death to travel, leads me to create. It feels natural, a comforting measure, my iPhone art muse.
I am awaiting my Uber driver to bring me to the airport. Spying a blank wall, I cut over. I lean in. Pulling the iPhone from my bag, I capture an image. Considering that I am early, the artful process begins. I move through my favorite apps. Checking the time, off and on, I continue editing the image until it feels right. 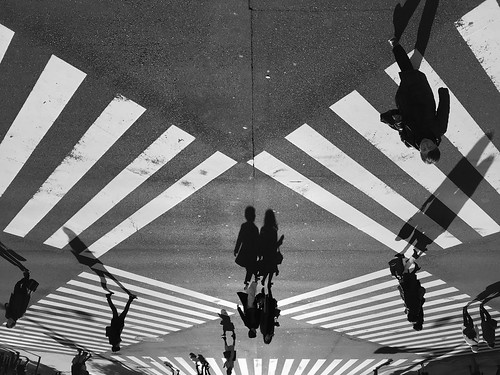 Apps Used: Snapseed
Backstory: Shadow stories’ was shot in Ginza, Tokyo. There’s a cool crossing there which has these great lines. I used a selfie stick and a Bluetooth remote shutter to get an aerial view and shot a few rounds in burst mode. I then edited in Snapseed – increasing the contrast and shadows. I then flipped the image but, to be honest, I couldn’t decide which to post – flipped or unflipped. After posting, my friend Brendan Ó Sé chipped it with a very insightful bit of advice regarding ‘flips’: “Flipped images work when the original lacks visual impact”. And I think he’s right! Unflipped was better. However, after posting I decided just to leave it flipped.. 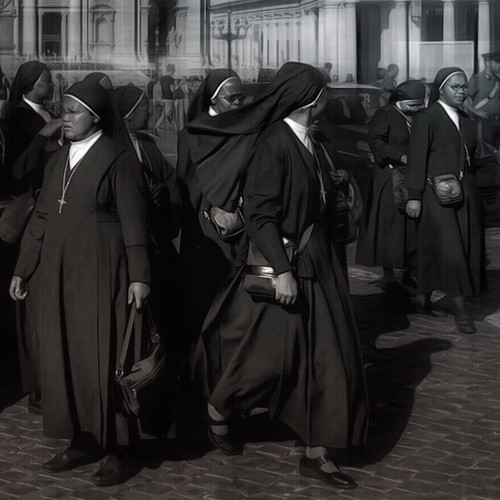 Apps Used: Snapseed, Nova, IColorama, Mextures
Backstory: As you may be able to see from the photo, it was taken in front of the Vatican in Rome. Among the sea of tourists, I saw a group of nuns who seemed to also be visiting from somewhere outside of Italy. This was one of several shots I took of the group since they seemed more than happy to have their photos taken. 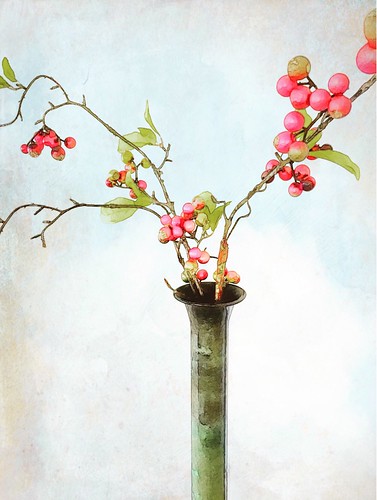 Apps Used: Snapseed, iColorama, and Stackables.
Backstory: This is from my collection, The Language of Flowers. It is a simple shot of berries in a green vase against a white wall. I added a little blue in the background with Stackables. Berries represent happiness and bounty. 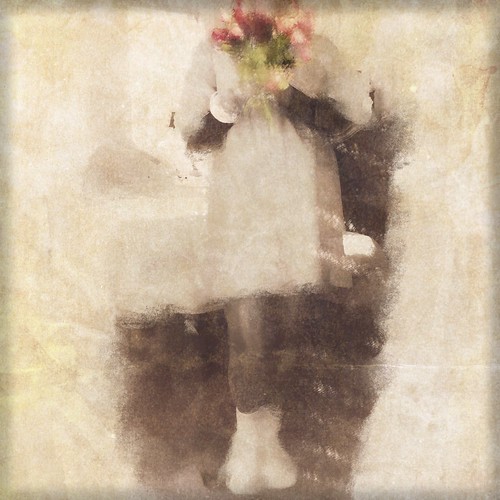 Apps Used: Superimpose, Repix, Effexy, and Snapseed.
Backstory: I found this great XL Boy Scouts of America button down shirt at a local vintage store. It has badges, a troop number, the fleur de lis, and emblems sewn on. I thought it would make a great dress. So, the boring story is, I came home, tried it on, and took a picture in my bedroom mirror. I added the flowers in Superimpose and used the other apps for effects. The title is Boy Scouts of America. 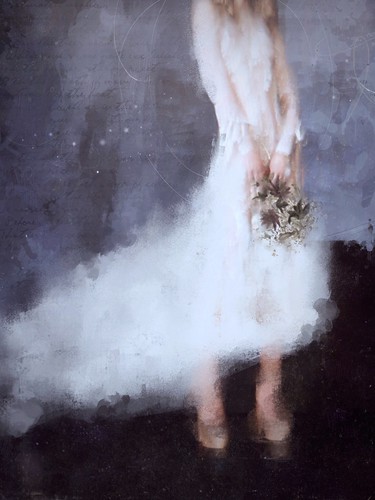 Apps Used: Shot with my iPhone 6 and edited with Procreate, Repix, Leonardo, Mextures, Snapseed, and Elasticam
Backstory: I stayed at a hotel recently and there was a wedding. I had my phone and was sneaking photos of the bridal party and guests in the lobby. This girl’s dress was actually blue. I cut her head off in the image because I thought it would add a little mystery and I reshaped her pose with Elasticam. She was also carrying a purse which I replaced with flowers. I extended her dress on the left with white in Procreate and then textured it and her in Repix. I was torn as to call this one The White Dress or the Bouquet since everything in the image points to the flowers. 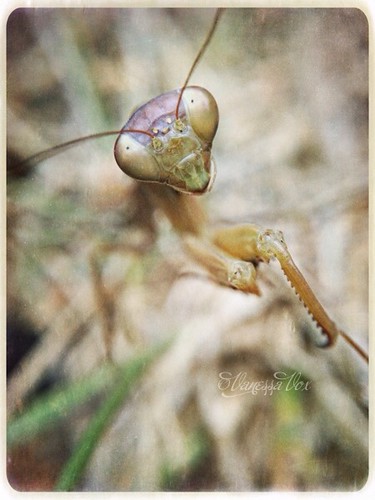 Apps Used: Hipstamatic, iColorama, Stackable
Backstory: What could be more exciting as to sit in the grass face to face with an alien? The mantis has a stereoscopic vision and a small black dot on each eye which is moving. It feels like a close encounter.
I used an Olloclip macro lens on my iPhone. Then I spoke softly to my model, “You are a fascinating creature. Very photogenic!” This conversation lets me forget the challenge to get a sharp shot. The depth of field of a macro lens is extremely small and as everybody knows insects are moving very unpredictably. At the end, I was quite happy that my patience and the patience of the mantis succeeded. Whew… I’ve got my photo series. 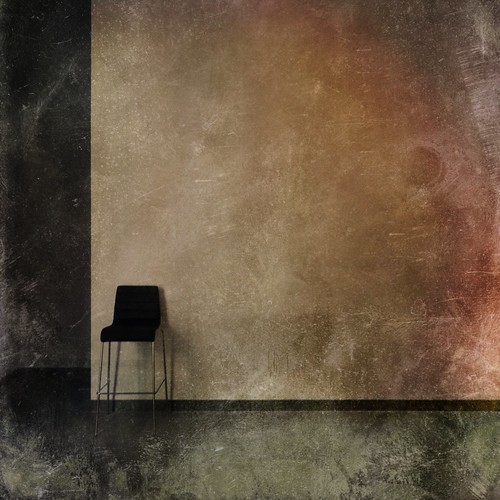 Apps Used and Backstory: This photo was taken at Ca’ d’Zan, the marvelous Venetian Gothic palace built in Sarasota by the circus king, John Ringling, in the roaring twenties. It houses the expected – lots of large Renaissance paintings and the unexpected – a paired down, elegant collection of Asian art with mid-century furniture scattered around.

After all the gold and grand paintings, my eyes rested on the simple chair against the minimal background. I used the Hipstamatic app to shoot and edit. I have been playing with texture a lot lately and the editing program in Hipstamatic gives me a huge range to explore. 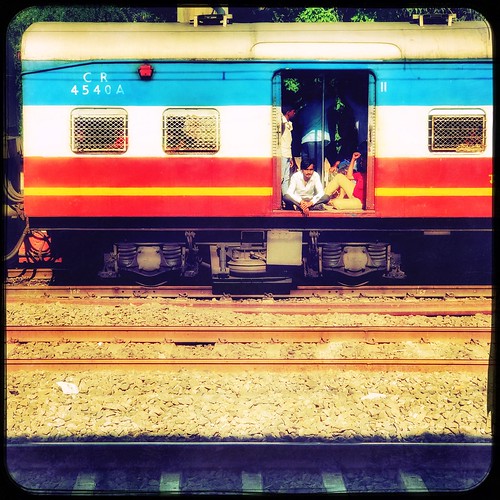 Apps Used: I shot with the iPhone 7 Plus “zoom” camera using the default app and edited with Snapseed then with Hipstamatic (Rudolph lens, Love 81 film).
Backstory: A small train station in Pune, India, a sunny November afternoon, a slowly departing train. The colors and the photo opportunities of India are infinite. I only had to shoot twice to find the right composition and as usual someone is looking right at me. 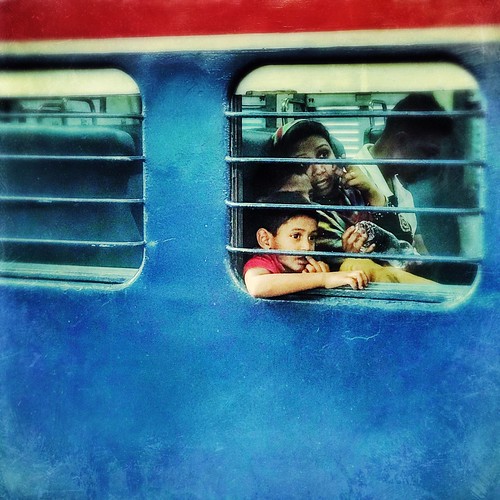 Apps Used: I shot with the iPhone 7 Plus “zoom” camera using the default app and edited with Snapseed (including some crop) then with Hipstamatic (Anne-Marie lens, Love 81 film, one of my favorite combos).
Backstory: The busy Chhatrapati Shivaji Terminus station in Mumbai is a feast for the eyes and for the camera. This was a long-distance train ready to depart and even with the small windows one can find interesting subjects. 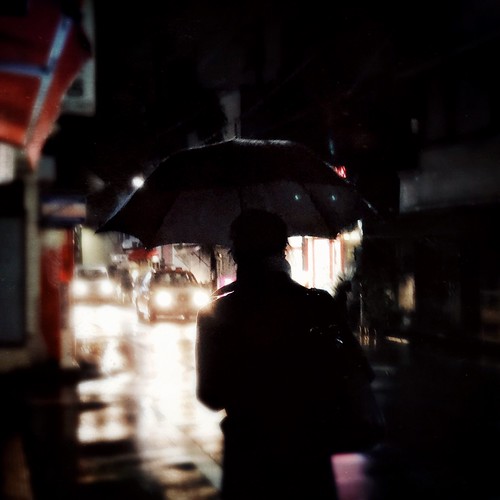 Apps Used: Hipstamatic, Superimpose, Snapseed
Backstory: This candid shot is a good example of a style that is closest to home for me. I love capturing the natural motion of our world in candid fashion and depicting the mood of any given moment in time. Inclement weather — be it rain, fog or snow — adds a nice layer of atmosphere to any scene, as does darkness punctuated by the limited light sources found in urban areas. So, when I left a meeting just after sunset and was confronted by a sudden, unexpected rain shower, i immediately pulled out my camera (phone) and grabbed a photo of the fellow walking ahead of me.
I captured this photograph using Hipstamatic. The film/lens combination I used didn’t quite give me the result I wanted, so I took the original file and ran it through Hipstamatic three times, each time using a different combination. I then blended the three versions in Superimpose and made a final few adjustments to the lighting in Snapseed. 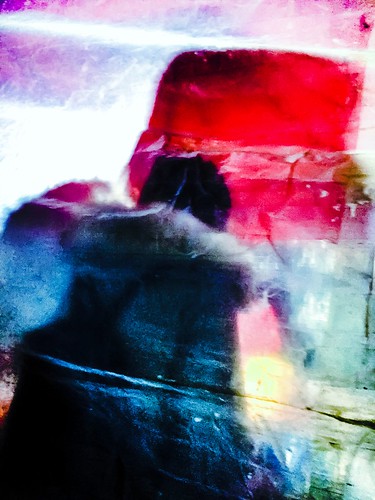 Apps Used: Shot on iPhone 6 Plus with the ProCamera app, post-processed with Snapseed.
Backstory: Freezing winter night with the fierce bone-chilling mistral wind relentlessly rubbing your face. A thick leather overcoat with fur on the collar doesn’t seem to keep you warm enough in the night when you’re roaming outdoors. You’re lucky if there’s a patch of red ahead that warms you through your eyes.
Shot through an opaque plastic screen that provided dirt and grunginess. Processed with Snapseed in which local adjustments of highlights, shadows, colour warmth and saturation were applied to different parts of the image.