Welcome to this week’s eclectic mix of images shot and edited with an iOS device, usually an iPhone or iPad or a mix of the two. As always, our photographers and artists featured below have been asked to include the apps they used and if possible the backstory that lead them to take create the image.

Apps used: Snapseed and Phonto
Backstory: After spending the day visiting antique shops in Amish country, we passed this old motel in Strasburg, Ohio. I had to turn around and get a few pictures of it because there aren’t very many like it around here anymore.

Also rounding out the talent this week are the following creative iPhone image makers:

iPhoneographyCentral picks around 12 iPhone images every week to showcase the latest talent experimentation, shooting and editing with the iPhone and iPad.

If you’d like a chance to be featured in this weekly showcase,  please join our Flickr group. where you’ll find all the information on how to submit your work.

If you have any questions regarding this feature, my online classes or any editing topics you’d like to see me write about and illustrate, please email me at nicki@iPhoneographyCentral.com

Latest iPhone & iPad mobile art classes 2020…
If you’d like to learn more about creating art from photos on an iPhone or iPad using apps like Snapseed, iColorama, Procreate and Superimpose X you might like my new iPhone art video classes, Armchair Art Adventures. 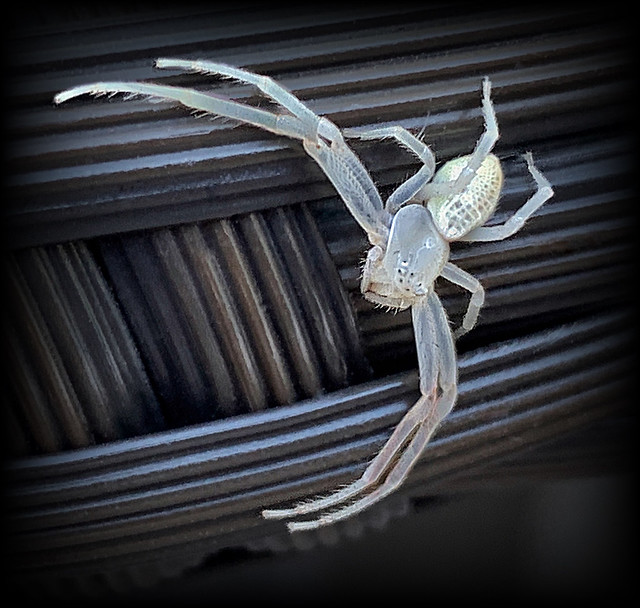 White spider by Michael Brunsfield
Apps used: I shot his portrait with my iPhone X, and started, as I always do, by opening the image in Snapseed, to clean up and tune the image, sharpen areas, and I needed to heal a lot of bits in this extreme close-up.. Normally I love to process my images to push them toward illustration, but this did NOT need much help. In iColorama, I added a vignette and sharpening here and there to accentuate the hairy legs and body subtleties. As I suggested, happily this did not need much work.
Backstory: I shot my Strangely WHITE spider while sitting outside having a dinner at a friends home. They have a large round table made of this marvelous woven black material. The entire hour of our dinner this spider was happy to sit quietly on the edge one foot from me, without moving. I blew a little air in his direction and he changed his position slightly, but appeared content!. He/she was only about an INCH across.

Apps used & Backstory: I love the Procreate app and learned some new tricks in Nicki’s Armchair Artwork class. I tried them out here, combining them with some painterly additions in ArtRage. 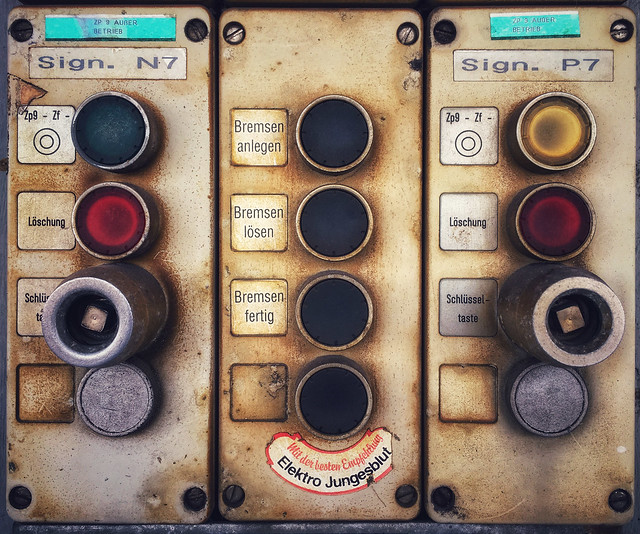 Apps used & Backstory: I was on the way to an urbex tour. I used the railways. On a special station I had to change the train. While waiting for my connection I was strolling around on the gate and found this.
I took the photo with my iPhone 6s. Later sitting on the train I postprocessed it with snapseed. Not much work. But I liked it instantly. 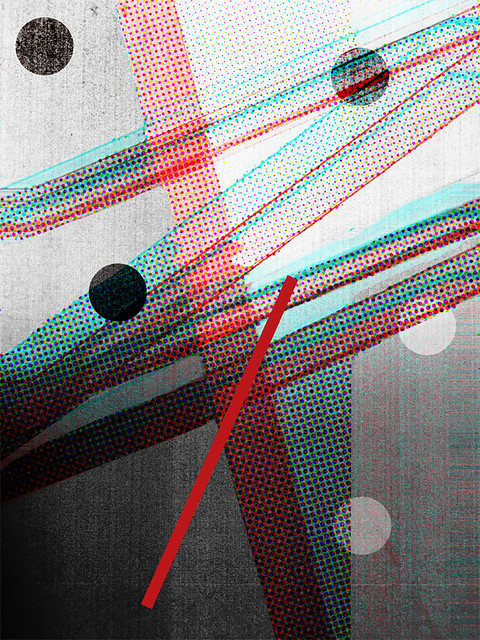 My photo Dots and Lines by tahewitt
Apps used & Backstory: This piece started as an abstract photo created during a digital photo class I was teaching. We do an abstract assignment in that class, and I made this to demonstrate the various ways one might go about creating abstraction in-camera. The original photo is drinking straws laid on a light table. I printed that photo on a cheap B&W office laser printer, and rephotographed that print with my iPad. I like the glitchy, photocopy-like look that the cheap printer gives to the image. I made three different versions. First, I did general post production in Snapseed. What looks like halftone dots was a version done in an app called Halftone, which makes photos look like pages from an old comic book. The color channel separation was done in iColorama. I used Procreate to layer the three different versions, and selectively erased parts of them. The larger circles and the red bar at the bottom were also added in Procreate. 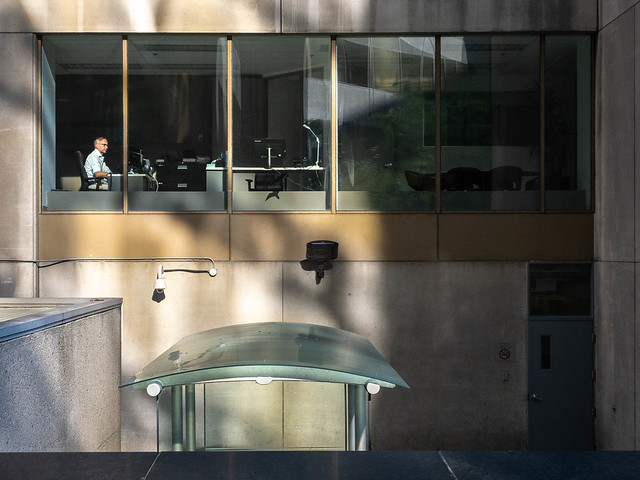 Toronto, August 2020 by Karl Edwards.
Apps used & Backstory: The image was taken on an iPhone 11 Pro Max using the ProCam app. I use all manual exposure settings and shoot exclusively in RAW. The brightness and contrast were adjusted to taste in Lightroom.

I’m a street photographer by nature and started shooting exclusively with my phone this year. When this shot was taken I was shooting along University Avenue in Toronto when I spotted this guy working in a window in a building across the street. I swapped to the 2x lens as I crossed the street and managed to get a couple shots in before the scene changed.

The iphone is turning out to be a pretty amazing tool for street photography. Battery life is amazing and the phone produces some pretty decent results. The dynamic range and responsiveness aren’t on par with more expensive digicams but it’s totally workable for most situations. When I’m shooting I disable display auto-off so the phone is ready to go when I need it and I set the focus at the camera’s hyperfocal distance which maximizes the amount of the frame that’s in focus. All that’s left for me to do is adjust exposure (if needed) and look for interesting shots.

Of course, people don’t react to a phone the same way they react to a camera so you can get candid shots in a lot more situations… I’m still pretty new to using the iPhone as a serious street photography tool but so far I’m liking it quite a lot! 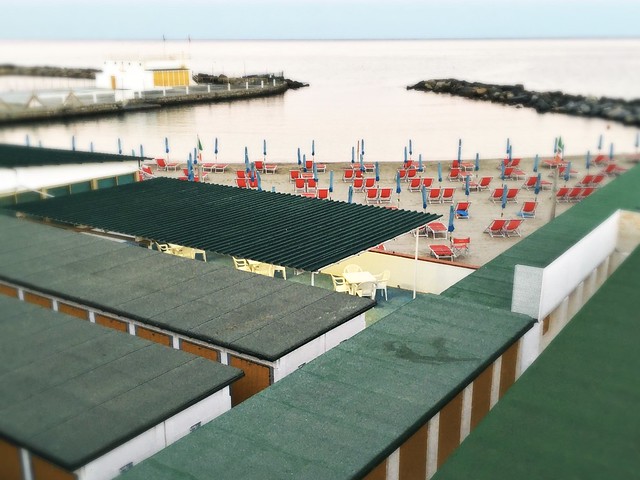 Sanremo, Italy by Occhio Privato
Apps used: Shot with Hipstamatic 359 on an iPhone SE set to Loftus Lens, No Film, and then post processed only to crop it and to adjust depth of field.
Backstory: I was on the seafront in Sanremo, Italy, at dusk when the geometry of the landscape caught my attention. 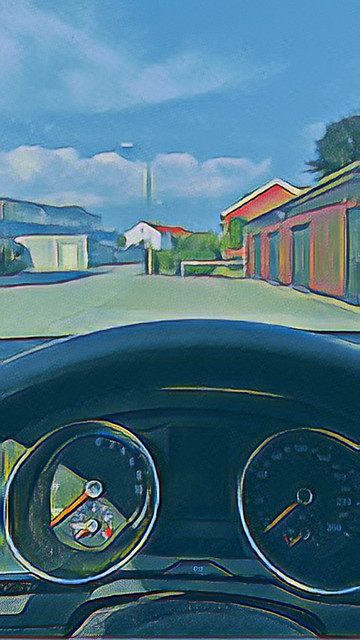 Through the windshield by Erik Viggh
Apps used & Backstory: The scene was my view sitting in the car while waiting for my passengers. The colors of the buildings and sky worked with the app Photoshop Camera and the Artful lens. 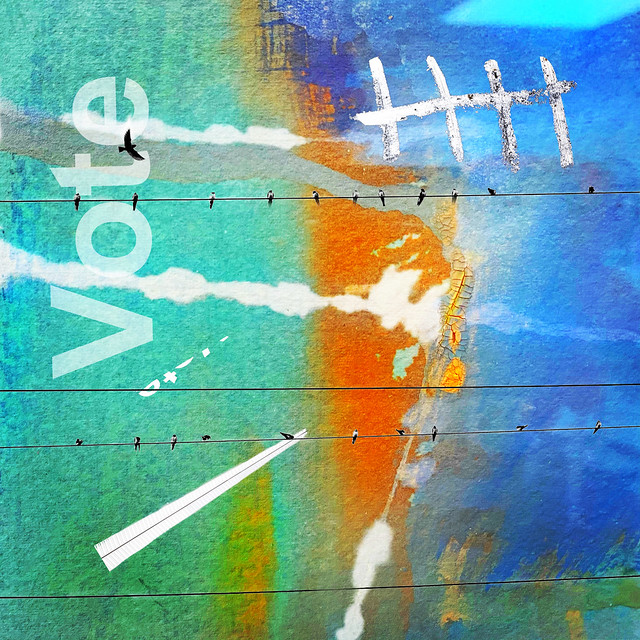 Vote by Michael Beresin
Apps used & Backstory: I was recently inspired by Nicki FitzGerald to try the app SuperimposeX to help expand the creativity in my iPhoneography. I have some strong political beliefs. My image titled “Vote” was imagined as an apolitical call to vote. Vote for anyone of your choice. In a polarizing world, to choose not to vote, seems like relinquishing a critical American right – enough said. After finding an interesting background, I enhanced the color with Snapseed, then used SuperimposeX… importing several different images using the layering and masking technique and adjusting as necessary. 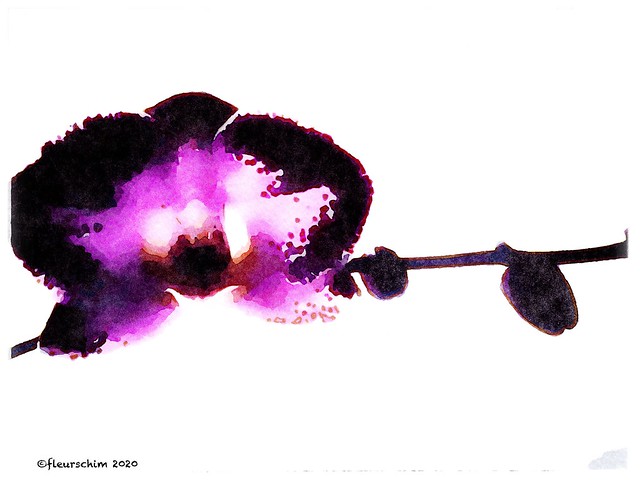 Moth by Fleur Schim
Apps used & Backstory: This is a capture of a Moth orchid (phalaenopsis). I used my iphone11pro @2X for this shot. I transformed the original image with a lot of editing on my iPad Pro. SNAPSEED: I tuned this image with anti-ambiance, and anti-structure, thereby eliminating all distracting details. This isolated the magnificent orchid, and created the effect of a floating image. I decided to create a very painterly effect with ICOLORAMA, using STYLE: both painterly and watercolor.
Additionally, I created an image using SIMPLY WATERCOLOR. I blended both ICOLORAMA result with SW result in IMAGEBLENDER to get a best of both. Finally, I re-edited in SNAPSEED, once again, anti-ambiance/anti-structure for the final image.
I had a lot of fun with this back and forth process, and am very pleased with this reimagined image. 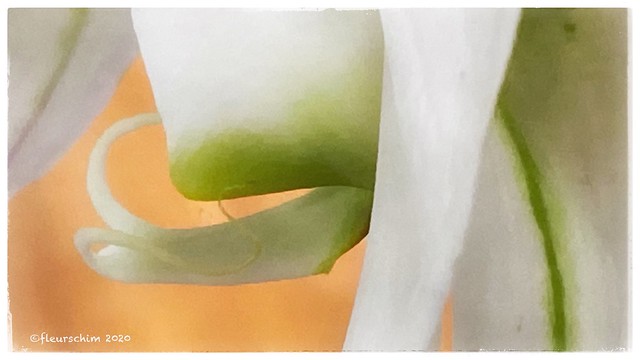 Detail of phalaenopsis (0rchid) by Fleur Schim
Apps used & Backstory: This is a capture of a phalaenopsis orchid, sometimes called a “Moth” orchid, because of its interesting shape. I took this image with my iphone pro 11. I used the camera+2 app for the macro view, at 2X. One usually photographs orchids or flowers from the front, while I chose to photograph this orchid from the back. The morning light lit it up, and highlighted its beautiful features. I did stabilize my iPhone on a ledge behind the orchid. I also enabled the apps stabilizer feature.
I edited the image on my iPad Pro with SNAPSEED: I Tuned the image but decreased both ambiance, and structure in Details. This is an interesting idea, as you take out a lot of detail. This image lended itself to a painterly/watercolor effect, which I managed in ICOLORAMA.
I am very pleased with this soft, ethereal abstract. 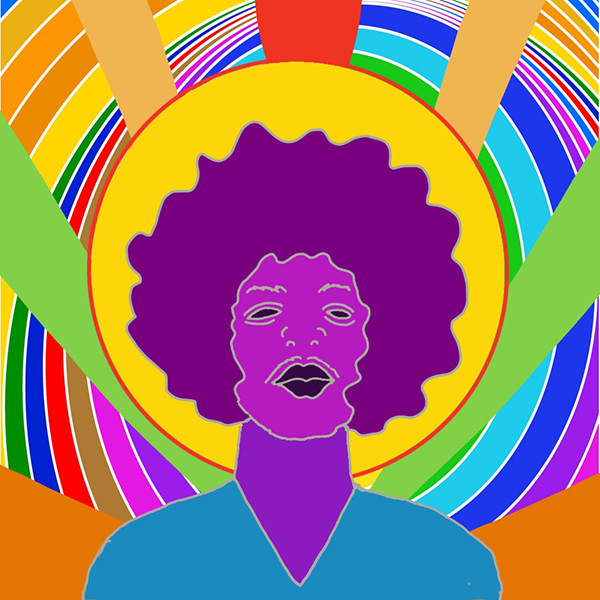 Apps used & Backstory: I am currently taking a Skillshare course on creating fun expressive digital portraits. This particular class on creating stylized portraits was aimed at people using Adobe Illustrator however I adapted the instructions to create this image in Procreate. We were encouraged to research our chosen celebrity and do a number of preliminary sketches and I created a moodboard and colour palette so that I would only use a limited range of colours. I roughly traced over a photo and then turned it into my own sketch. I painted in the various colours. The swirly bit in the background is a stock image from Unsplash which just happened to have all the colours I’d chosen. I imported this into Procreate right at the end.