This week’s Apps Uncovered presents a selection of what I found to be the most compelling images for the week in our Flickr group, across a wide range of styles and subjects – but with one common theme – images captured in The Great Outdoors.

This week’s lead artwork is a collage of several disparate elements (needless to say) – Saturday Kicks by columnsovsleep, in which the artist creates an astonishing composition with a winged human striding through the clouds. The scene is dramatic and thought-provoking. 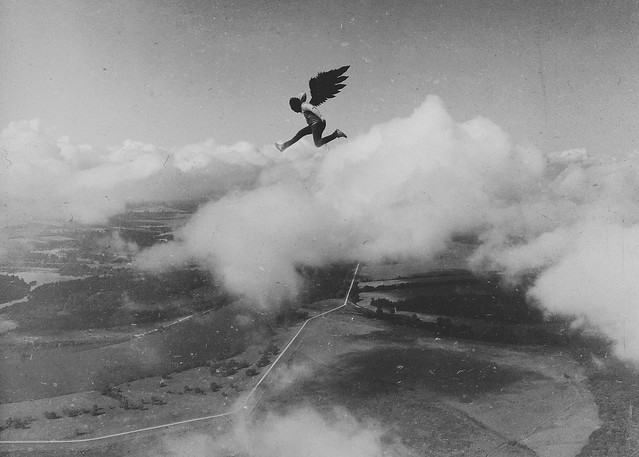 Apps used and backstory: I was flying back home for my baby sister’s wedding and manage to get quite a few good shots from the cabin window. Still rocking the iPhone 6, I used Pixite’s Union and Source to add the figure and wings. I used my new fav original bnw Mextures formula EFFVPWY.

Apps used and backstory: I used just the ios photo app to capture the scene, very little post processing with snapseed. The situation, where I took this picture, was a walk to the beach in the Normandy, in the early evening. The mood was a bit tired and content.

Apps used and backstory: I shot this image whilst walking our dogs. I noticed all the spiderwebs on the bridge railing, shot several images with the native iPhone 7+ camera and liked this one the best. Apps used: Snapseed basic editing/processing, mextures: add some mood and texture and finally VSCO and Foodie to finish the look. 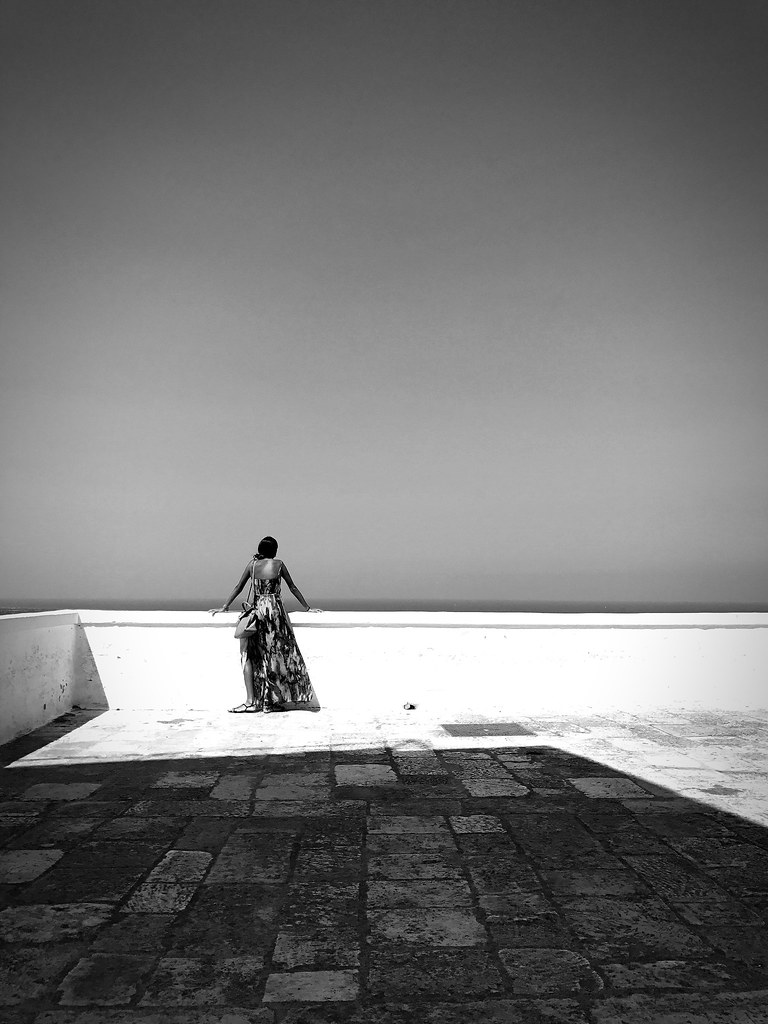 App used: The pictures was taken with the iPhone 7 camera and edited with Hypocam, an app specifically designed for black and white.
Backstory: The basic and the only idea of this picture and the series to which it belong, is to to capture interesting images (something that i generally do with a reflex) with the minimum of equipment: a phone with a decent camera. Something discrete and not invasive as the older masters of photography did with cameras like Leica M.
I generally do not plan what to photograph, I like to improvise, and prefer just to walk somewhere taking pictures of what grab my attention. Only after i realize that unconsciously I’m always be attracted by people in their every day life enclosed in a geometry formed by strong lights and shadows. 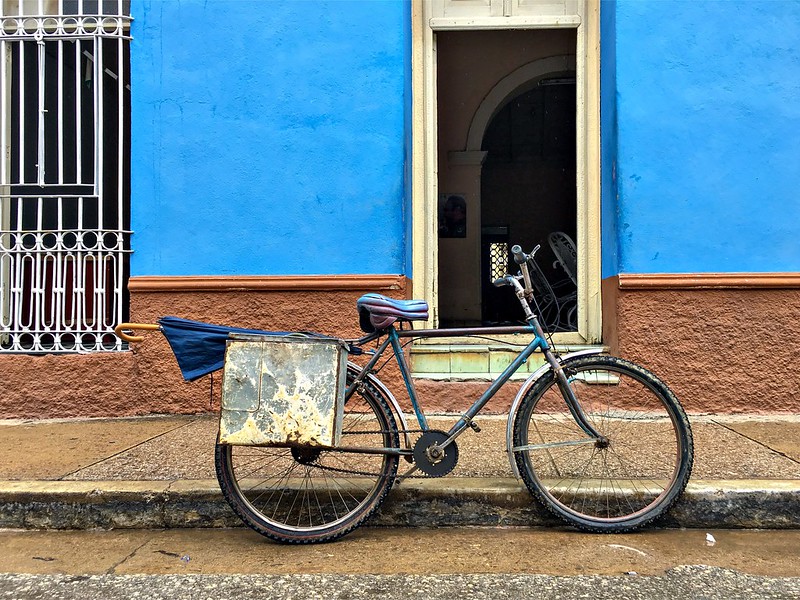 Bike with Umbrella by street level

Apps used and backstory: I imported this into the Hipstamatic app for editing. A bicycle on the sidewalk can be pretty, dirty, and enlightening. A glimpse into the city and it’s dwellers, the architecture and the mind-set. I always have my eyes open for a bicycle shot.

Apps used: Camera +, Snapseed, Stackables and Distressed FX
Backstory: My husband and I went on vacation to Italy this past summer. We stayed in a medieval village called Soriano nel Cimino in the Lazio region of central Italy. This breathtaking hillside scene was shot through a window of the lounge in the Palazzo Catalani where we stayed. The 13th century Orsini Castle is perched on top of the hill.
For seven days this was our view. I took photographs everyday and at different times of the day. It was mesmerizing. This image was the last of seven edits, and my favorite… an Old World distressed finish. 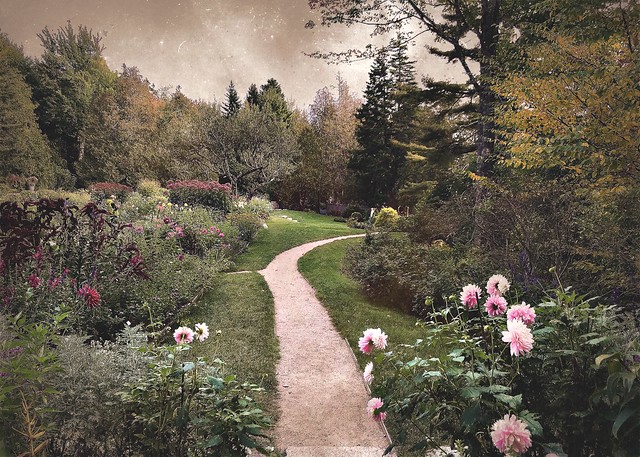 The path through the dahlias, Thuya Garden by Lydia Cassatt

Apps used and backstory: This photo was taken with the Hipstamatic app which I have used since 2012. I took it last week at my favorite garden on Mt Desert Island, Maine, as I enjoyed the last of the dahlias for the season.

Apps used and backstory: I used the Photos App and no editing.
I know the village well but this was the first time that I had been in the early evening and wanted to visit the village during the ‘golden hour’ before sunset. The light coming through the trees was really eye catching and I wanted to capture the moment. 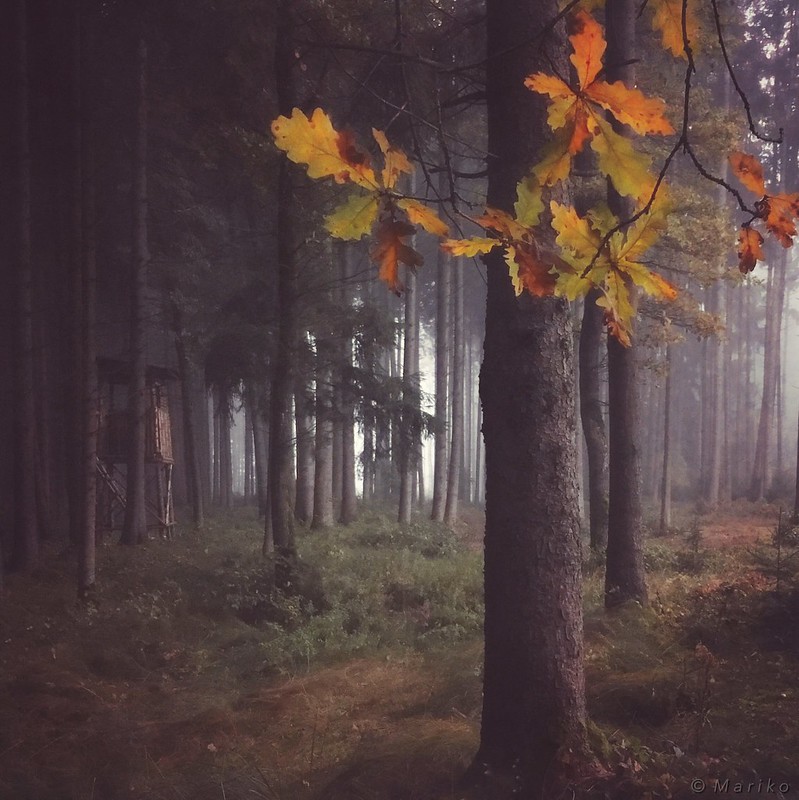 Apps used: The image was taken with an iPhone 6s, Hipstamatic App and edited with Snapseed and Picfx. 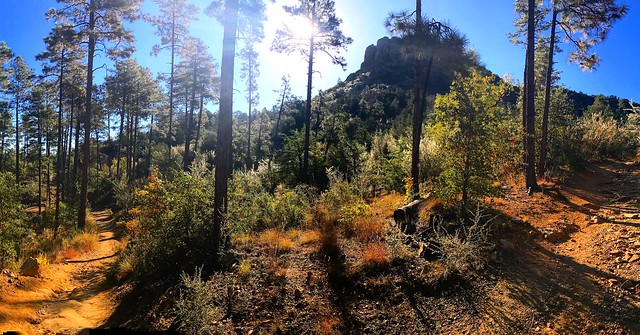 Apps used: Adjusted on iPhone using Aviary and Instagram apps.
Backstory: I regularly hike and photograph the Thumb Butte Trail just west of Prescott, Arizona. On October 9th I started hiking up the north, steep side about 7:30 a.m. About an hour later on the descent, I reached this spot near the end of the loop trail on the Butte’s west side. What caught my eye was how beautifully backlit the entire scene was. Also, the curved trail descending from right to left added a strong compositional element. So, I set my iPhone 7 Plus to panorama and carefully swept across the scene from descending trail edge through the ascending trail edge. Two other panoramas included more of the scene but this one seemed stronger as a composition. So I loaded it into the Aviary app and selected the “Enhance” filter emphasizing the “High Def” and “Scenery” options. I further tweaked it in Instagram before loading it there. I feel so fortunate to live in Arizona with its spectacular scenery. You can look at a scene out here one day and the next day in different light it will look completely different. My artistic eye remains perpetually engaged and it motivates me to get out, get moving, and get lots of pictures of what I like to call “the Arizona Outback.” I take pictures almost every day of my life. “There’s so much beauty in the world.”–Lester Burnham (Kevin Spacey) in the film “American Beauty.”