The first image by Will (Willgenix) of the UK, is one of three images for our consideration that remind us of those who lost their lives in defense of the free world during the First World War, and in all similarly just wars fought since then to protect the liberty of democratic states. The title to Will’s image really does say it all – “Lest We Forget.”

Oh, and there are also a couple of strange, fantastic rabbit images thrown in for good measure, to leaven the mood a bit.

Lest We Forgot by Will

Backstory: I think this pretty much says it all. 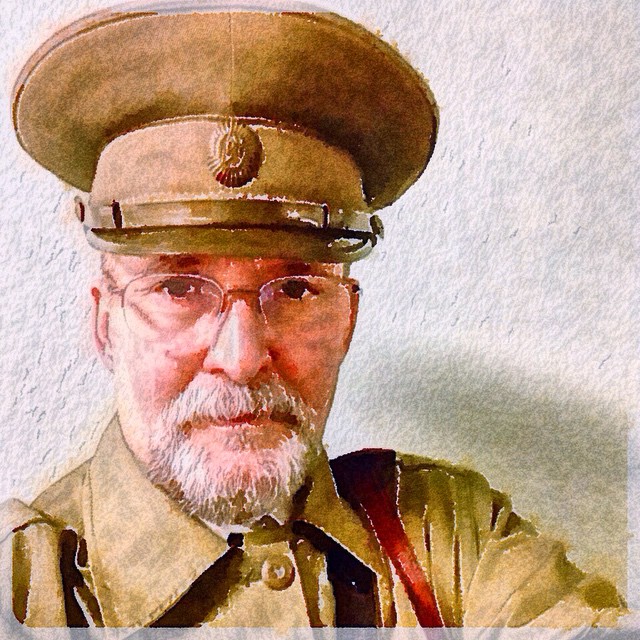 Backstory: Paul Ewing is Professor of History at Yavapai College, and invites viewers to watch this lecture he presented there in November, 2014 – “All Quiet on the Eastern Front: The Untold History of Russia and World War I” – part of a program commemorating the 100th anniversary of World War I and its root causes. He writes: “All I would have added is that the image is developed from a selfie I took moments before I delivered Thursday afternoon’s version of the same speech. Your link in the album is to the Saturday show, the best of the two performances.”

“Moonrise over a cemetery – Autumn” by David DeNagel

Backstory: Recently, there was one of the most beautiful autumn moons I can remember. It was just beginning its rise. I decided to take a drive and search out a vantage point. The town cemetery gave me what I needed. The ambient light was already moving into dusk and soon it would be night.

I took this image while bracing a mini tripod on a tombstone. I used an auxiliary telephoto lens to achieve the framing I wanted. I shot with Oggl( John S & Uchitel 20 film). No other post processing. 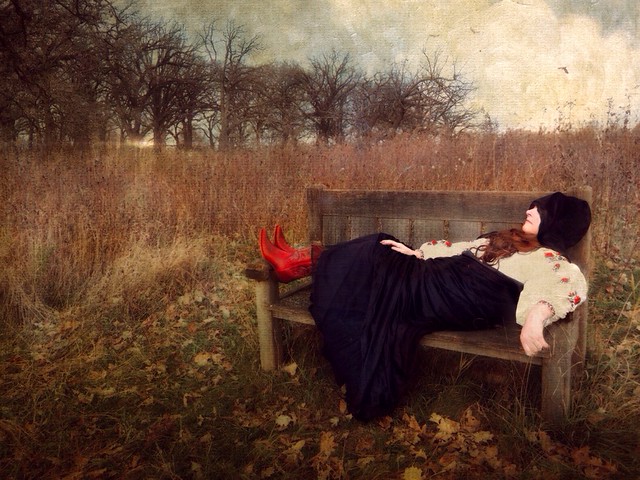 “Time to reflect” by Irene Oleksiuk

Backstory:  This was taken at a very small prairie/savannah close to my home. I love this place for its peacefulness and every time I go, I am the only one there. Perfect for taking story telling selfies. 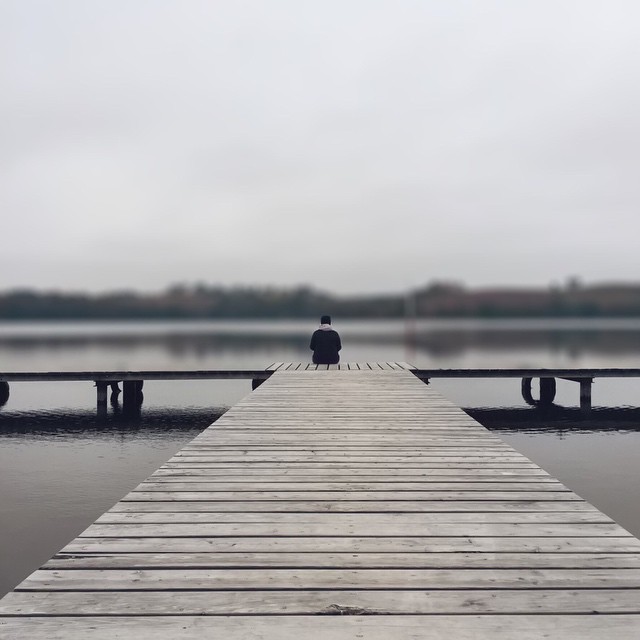 Backstory:  The picture was taken at Chmielno on the bridge in Poland. In the photo elements are grey, and minimalist,emptiness, sadness. The shot presents the idea of autumn.

It was a cold and cloudless day, and my friend was sitting at the bridge alone,and She’s staring at the emptiness… inspired me to catch this moment on picture.

Backstory:  The girl is my daughter, so I take a lot of pictures of her 😉
This day she didn’t want to be shot, and she was hiding herself behind their arms and hands. I insisted, and she stopped hiding when I put the camera very closed, probably because she was disappointed. Then I shot. 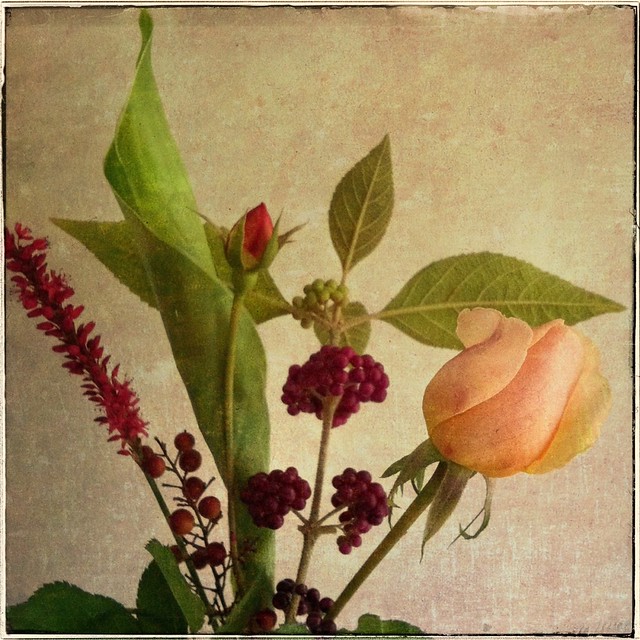 Backstory: Gathered as the light was fading: Big Persicaria, virginal canna leaf not yet nailed by freeze, Nandina berries that the birds haven’t finished, purple Callicarpa, and probably the last two buds of rosa Jude the Obscure. All jammed into an old saved bottle of Caribe, a Caribbean beer with a flamingo logo.

My photos of flower groupings keep the garden alive during winter while waiting for next spring to arrive, nostalgic and fuzzy as a lot of memories are. 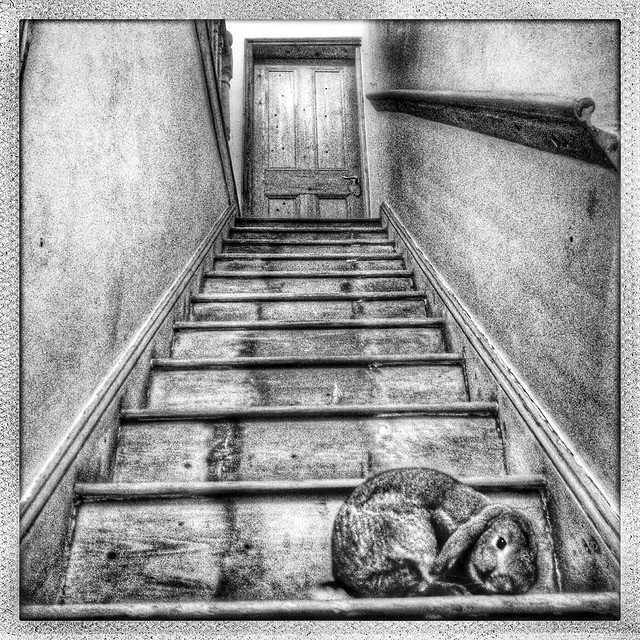 Backstory:  This image was taken as part of my 365 project, it all came about when our house rabbit Malcolm was climbing up and down the stairs, and how it looked along way up for a small animal living in our human environment. The image was taken on a Iphone 5 using the Hipstamatic app and then I processed it using Snapseed turning it Black and white and boosting the contrast and enhancing the grain.

Backstory: Driving into Fredericksburg last spring I saw a road sign “River Road”, so I turned around drove down it for several miles. When I turned around I saw this lone Oak tree on the edge of the pasture that I hadn’t notice the first time. Took several shots from different distances…

Apps used: Camera+ (for the photograph, cropping, and ansel filter), Noiseware (to polish it off a little) and Stackables (to add the layers and textures)

Backstory: We tried a new Mexican restaurant, in a very small West Virginia town, this afternoon. Eric drove. My daughter braided my hair. I leaned to the center of the car, so she could reach my hair from the backseat. We took a long drive through the country and saw fourteen horses and more cows than I can recall in order to quantify. We returned home and watched a movie. Her talents as a pastry chef extend to beverages, as well. As we are enjoying our mimosa, I am comforted by the warmth of a gentle day filled with sweet hands and much love.

I hope you are with the one(s) you love most on this Sunday afternoon, my friends. xoxo

“Strange Voice …and a strange noise” by Cattis C.

Backstory: I love images that doesn’t reveal too much, but have a strong impact at first glance. Strong enough to make one stop and curiously study the photo to understand the scenery, and/or add in ones own story.

As with pictures, as with all visual impressions: This odd, kind of disturbing scenery caught my attention immediately, even though I was in hurry and not at all wearing my “photography-glasses”.

The place is an art gallery and the giant rabbit-like sort of installation, is part of their showcase and therefor placed very close to the window. From where I stood I could see straight through the corner-windows the people that passed by on the street, behind the gallery. I waited for one single person to show up just in gap that was shown in my grid. Took a few shots until I got what I wanted.

That weekend, me and some friends, had gathered up on twitter, to explore and experiment with different kinds of blur and I had this shot that was in need of a little mystery-treatment.
I tried to increase the depth and the twisted perspective by giving the “rabbit” a sort of reflecting shadow. I used a tool in app PicArts that enables you to select parts of image and create a repetition of it, a sort of echoing motion. I also added motion-blur on parts of the picture to point direction and trick the eye even more (here I also corrected curves and added a slight HDR effect).

To get rid of disturbing details I used app BlurFX. I worked with the ‘median blur’, which has a very charismatic and artistic feel to it. Highly recommended!
Then I cropped it and corrected vertical lines with app SKRWT.

The final touch was done in app Tintype (by Michael Newton), where I added some grit and grain, depth of fields and frame. This is also where the dark sepia tones was added.
Viola, I had the result I wanted!

Backstory: This photo was taken on the banks of the Kafue River in Zambia. Part of eight months solo travel, I had hooked up with an outfitter for a couple of weeks to go camping in Africa. On this particular day, after several hundred kilometers of hard driving we arrived to this serene spot to set up camp. Relieved to be out of the truck and my tent up and gear stowed, I paused a moment to admire this most beautiful setting. Here there are no planes overhead or cars on nearby roads. Just nature (and some vervet monkeys swinging in the trees overhead).

I usually begin my edits with snapseed to adjust color and straighten if needed. Then I applied distressedfx using the controls within the app to adjust the overall effect. Then I took this edited version and the original version into superimpose and played with luminosity. And that’s it. 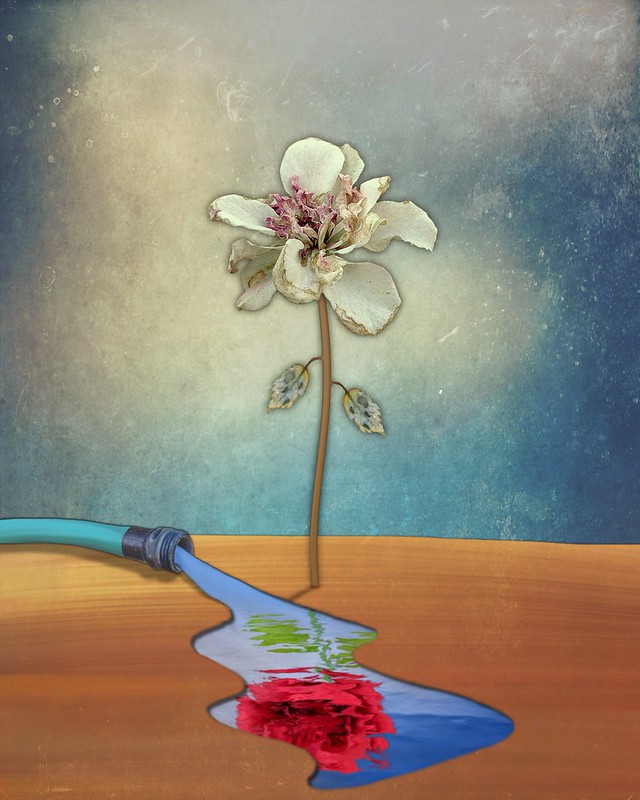 “Reflecting on What used to Be” by Wayman Stairs

Backstory: I created the original image with the red rose in art studio and then put it into reflect. Then. I used that reflection for the water deleted the red rose and created the dried rose. Then I put that into mextures to finish.