This week’s Apps Uncovered takes the idea of seeing the world with wonder and awe as its theme. The wide variety of imagery posted this week makes for a full-bodied collection of top notch images, across a spectrum of genres. Cecily Mariece Caceu’s wonderful capture of Haystack Rock in Oregon is the lead image for this week’s selection – who can look at this scene and not be captivated? I’m reminded of a quote from Aeschylus – “Overcome fear – behold wonder!” Other contributors include Waldemar Błażej Nowak, Gianluca Ricoveri, Ilovetodig0044 (Adam Slater), Lynette Jackson (a contributor to our book), Wayne Greer, Geri Centonze, Erika Brothers, James Sullivan, Paul Moore, Mariko Klug, Elaine Taylor, and David Welsh. 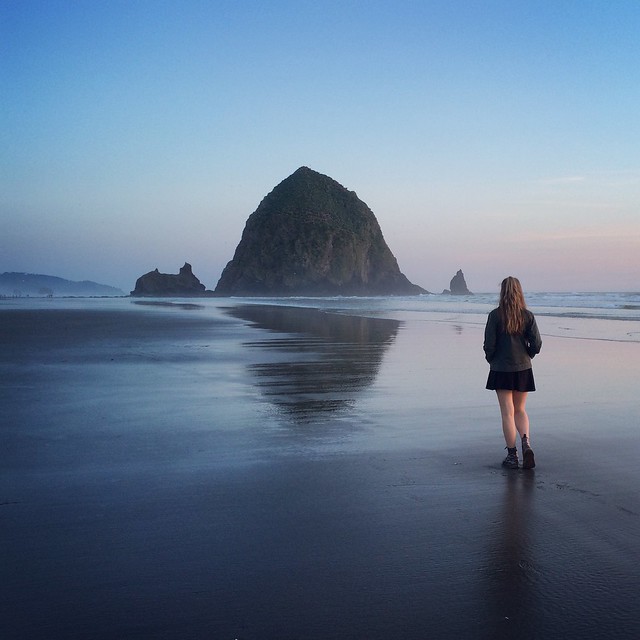 Apps used: Native camera with HDR setting on, and Snapseed

Backstory: I took this image at Cannon Beach in Oregon which is one of my favorite beaches and also the closest beach for me to get to (just over an hour’s drive). I used my native camera on my iphone 5s, selecting the “HDR on” feature so I can better control the exposure. The colors and tones were absolutely perfect as the sun was just about to set. I did some minor adjustments in Snapseed and that was all. I find the beach to be such a calming and refreshing place to go to clear my head and de-stress — I only wish I could get there more often! 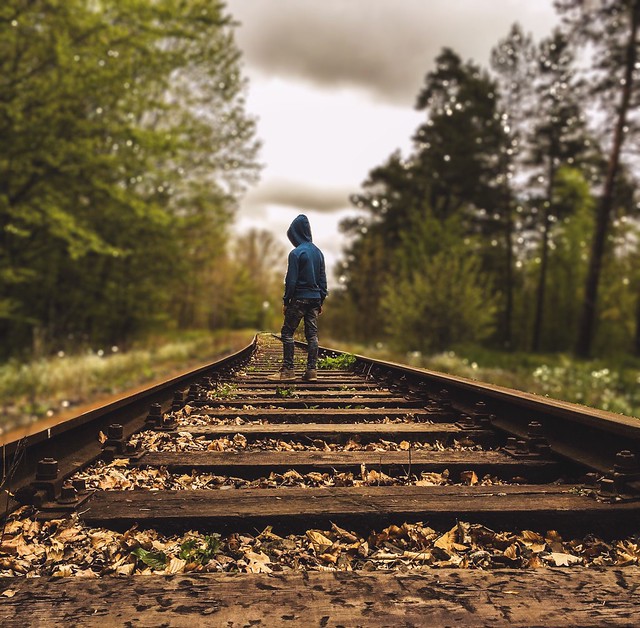 Backstory: I took this photo at sunset in the hills on the road to Volterra, Tuscany with the app Fusion, the editing was done with Snapseed and Stackables. 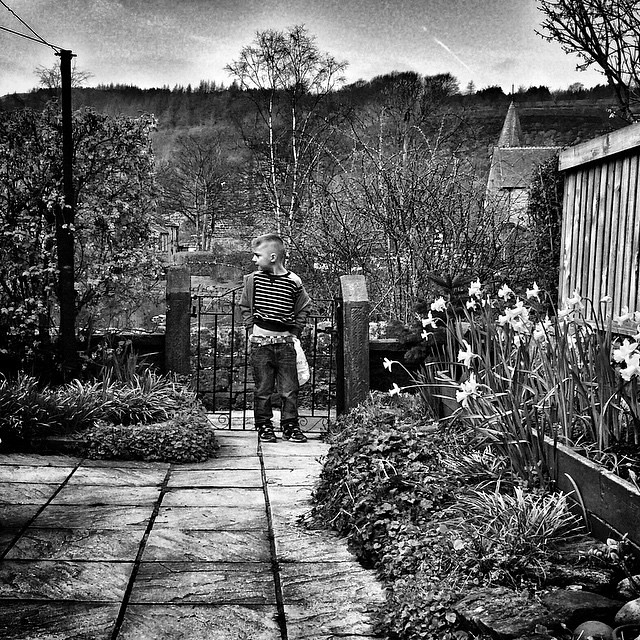 Apps Used: I used the native camera of an iPhone 5s, cropped, added punch and converted to b&w using snapseed.

Backstory: This work was taken during an Easter egg hunt; this kid didn’t seem to fully understand the concept of finding eggs, putting them in his bag and saving them for later. He found one, ate it then moved to the next. Because of this he was being ignored by other participants. I chose the subject due to the boys isolation within a rigid environment, with many leading lines making him the diminutive focus of the shot. His hanging jeans and aloofness also drew me to his isolation. 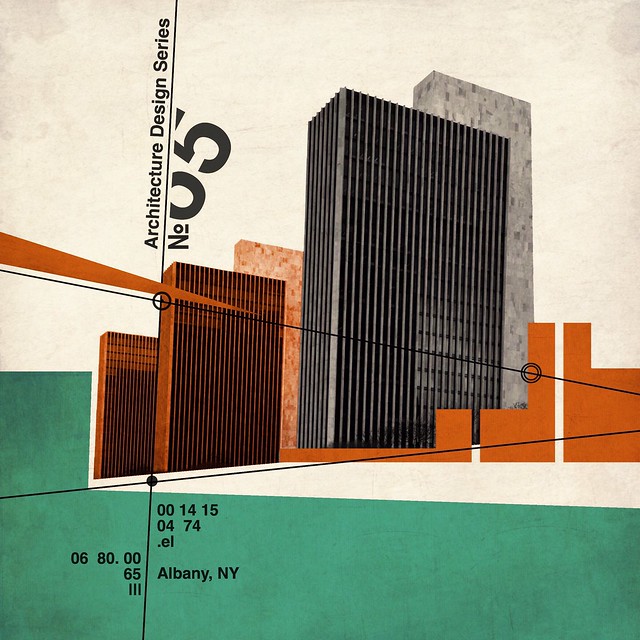 Backstory: Last month I visited friends in Albany, New York. There was not enough time to capture many shots, so I snapped quickly walking from New York State museum to parking deck. 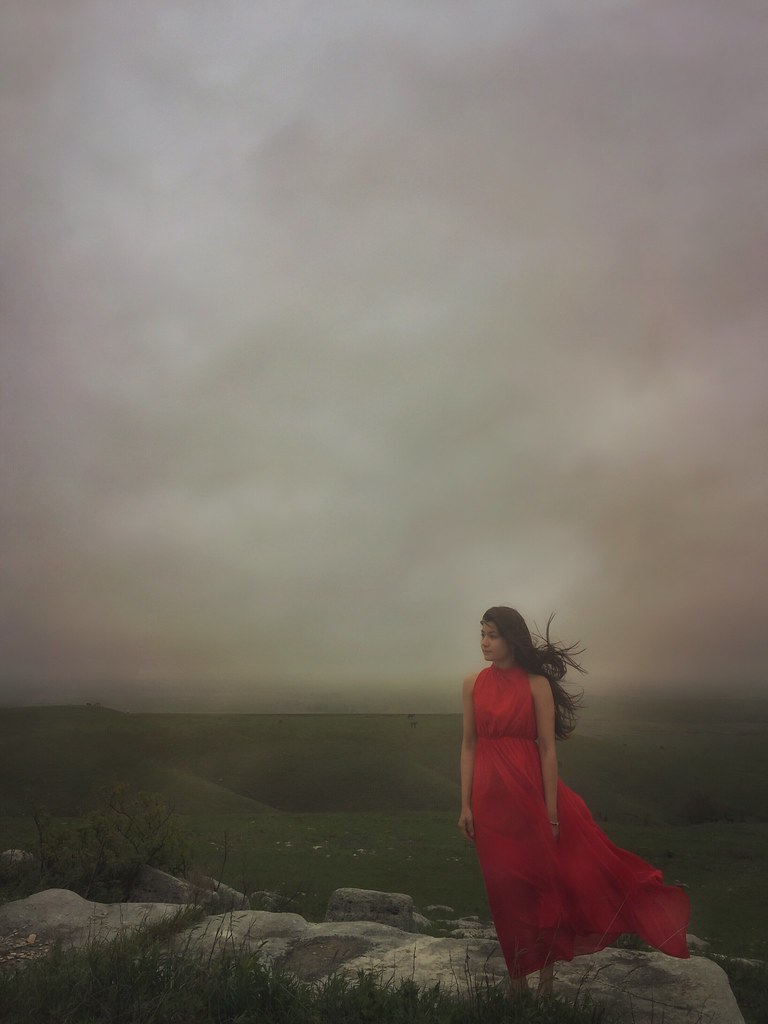 Far Away by Wayne Greer

Apps Used: Shot with ProCamera and edited with Snapseed , Photo Toaster and Mextures.

Backstory: My niece had ask me to do some photos for her graduation. I warned her that I knew nothing about portraits. She persisted , so my wife and I and her headed out at dark to a favorite area of mine about an hour and half away. We were rained out of our first location. On our way to our second I convinced the girls to stop at a remote hilltop that I been to before. When we got to the top , the clouds were dragging , the wind had picked up and there were wild horses in the distance ( if you look close , you can see them). Having no experience directing young women as to how to pose , I told her to face the wind , let her hair blow and to have a ” far away ” expression. Also to try and not look cold. It was a good combination of a good location the right weather and a very pretty girl that gave this a romantic , mysterious look and feel.

Apps Used: I shot the image with my iPhone 6 on an overcast day which allowed for a great starting image. I purposely wanted some of the background of my yard to be included to add depth to the photo, so I shot the flower off-centered. The apps used were Snapseed and iColorama.

Backstory: This year I planted bulbs in my backyard and have watched in amazement as they have bloomed. I wanted to document their temporary beauty so they have become the subject of many of my recent photos. They are wonderful in each phase whether it be the bud, the blossom or even in decay. This one was in full bloom. To bring out the detail and colors, I used the Tuning and Details tools in Snapseed. I normally increase the Structure, adjust Brightness, Contrast and Saturation. I also used the Blur tools in Snapseed.

I wanted the petals to have a softer appearance so I used the recently discovered Coherence found under Styles in iColorama. I used the mask function to remove some of the Coherence effect on the center of the flower and preserve the detail. 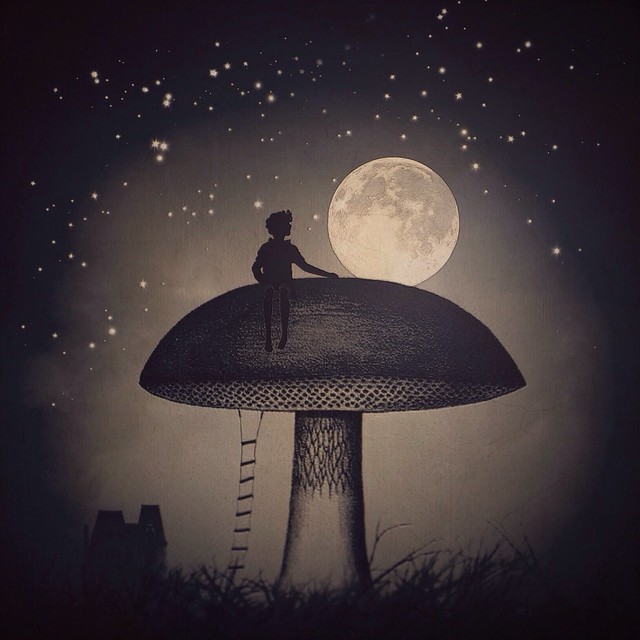 Backstory: I started to form my collage with superimpose, wanting to form an atmosphere of dreaming and sub-real, after applying the star background with Repix, I used MonoVu to give the finish monochrome and as a final touch and hint of texture with Stackables. 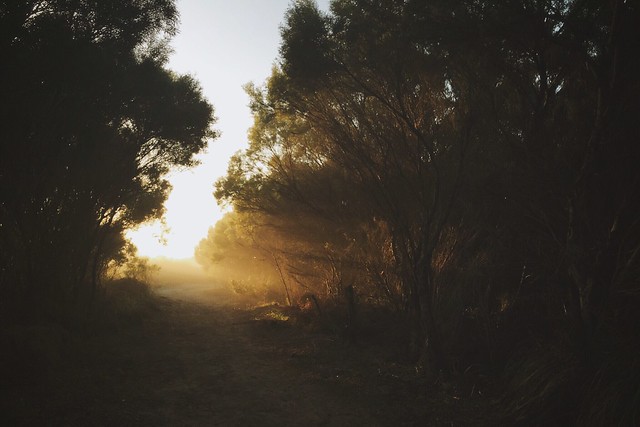 Light across the path by James Sullivan

Apps Used: Processed with VSCOcam with a10 preset

Backstory: This was taken on my Saturday morning dog walk. As soon as I saw the sunlight streaming through to the path I knew I could get a good picture. I took multiple shots from several angles. This was one of the first. 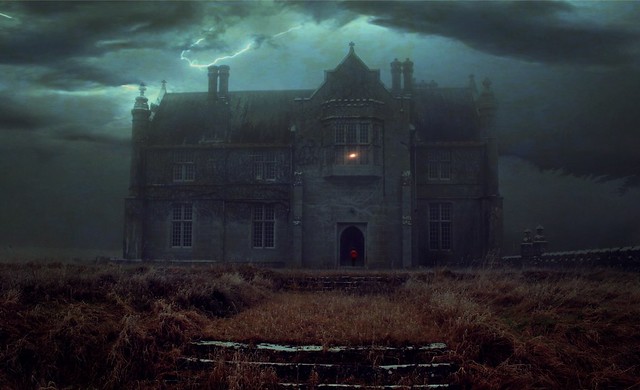 Somebody Home??? by Paul Moore

Backstory: This is a photo of a place called Durrow Abbey just outside my home town. It is an abandoned old mansion with great character. With this image I was just trying to capture the eerie atmosphere that surrounds the building.

I used an app called Mix to edit the sky and darken the image significantly. The original photo was taken during the day. I then used Lenslight to put the candlelight in the upstairs window. I thought this add to the mystery. Why would there be a candle burning in an abandoned building 🙂 To further add to the suspense I used Juxtaposer to bring in the boy standing in the doorway. This was taken from a photo of my son. It was too dangerous to have my children with me when I was exploring the grounds.

I have taken a lot of photos of the building this year in an effort to raise awareness of it’s existence. As I said it is abandoned and if it is not looked after soon it will fall in to rack and ruin. Which would be a pity. 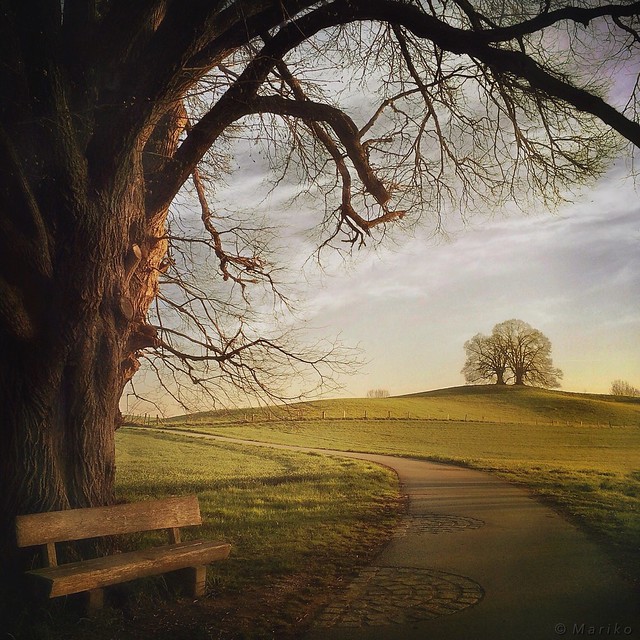 Have a Seat by Mariko Klug

Apps Used: The photo was taken with Hipstamatic Jimmy lens and DC film. I imported the image to Oggl and applied the Jane lens and Blanko Freedom 13 film. With PhotoToaster I cropped it slightly, adjusted contrast and lighting, used the lighting brushes to lighten up some dark areas like the bench and the tree trunk. The clear sky was somewhat boring so I added the clouds with HandyPhoto.

Backstory: This is one of my favourite places in Ebersberg, Germany, in the early morning. In the distance are the twin trees on the hill which were featured on Apps Uncovered on 01May.

Backstory: This was taken at a waterpark during a recent family holiday in Tenerife. My two young boys, who absolutely love being in water, were waiting patiently for the wave machine to kick in. The calm before the storm. I loved how they were positioned – slightly left of centre separating the two main groups of swimmers.

There was a messy and distracting clump of trees, sunbeds and parasols situated between the water and the sky. So, I took the image into a double Diptic frame to remove the distraction and enhance the scale of the image (not sure how to explain that step well). I used TouchRetouch to remove a couple of people at the far edge of the water who had become headless as a result of the Diptic step. I added the ‘buildings’ using Matter, then took the image into Stackables to adjust the colour and add some texture. Finally to Union to remove texture from the swimmers. 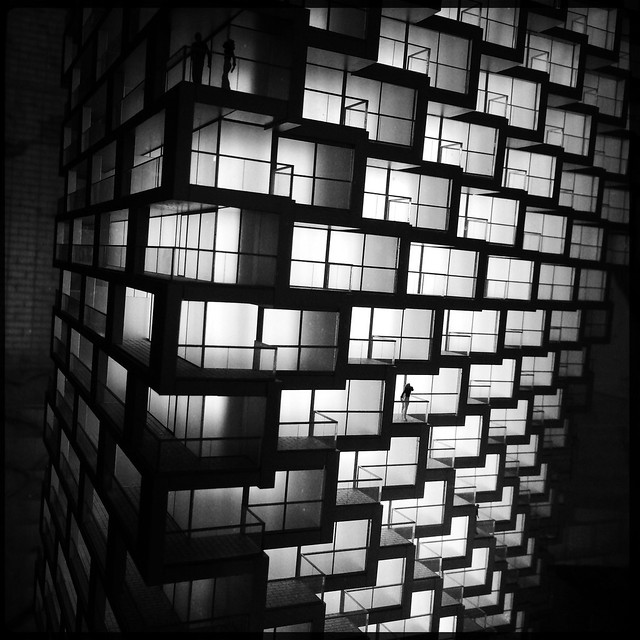 Backstory: During my last trip to Canada. In downtown Vancouver, found on the second floor of the Fairmont Pacific Rim Hotel, an architectural model display of the architect Bjark Ingels, the newest residential project of the city. Vancouver House is a gesamtkunstwerk – total work of art. Detailed to the smallest scale, the grand scheme makes use of a difficult site trisected by the Granville overpass and burdened by setbacks, transforming it into a “lively village” at the city’s gateway. the tower, in its height and proximity to the creek, is uniquely situated with views to both the water and the mountains, granting visual access to the breadth of Vancouver’s natural surroundings.

I studied the model for a while, then with iPhone 5s opened the app Hipstamatic, by default have my favourite settings in black and white. I pointed to different angles and shoot about 20 photos without flash. Light fixtures on the ceiling were not the appropriate, but the building was illuminated itself and that saved me to create a more detailed composition.