So many great images posted to our Flickr group each week that sometimes as I start looking, a theme suggests itself – it seems as though every third image was a picture of a younger or older woman, or a girl. So it seemed that I had my subject for the week.

This week’s lead artwork, by iPhoneographic artist and veteran iPhoneography Central contributor Geri Centonze is a fascinating self portrait. The somewhat defiant expression reveals a strength, resilience and determination in the face of illness. From the portrait, shared candidly and forthrightly, the indomitable nature of the human spirit shows through clearly. Geri has been a major player in popularizing iPhoneography on her website Art of Mob. Follow this link for a stellar set of interviews she has accumulated with fellow iPhoneographers: http://artofmob.blogspot.com/p/featured-mobile-artists.html

Apps used: Snapseed, Paintbrush, Prisma, Sketch Club and Formulas.
Backstory: In September 2016, I was diagnosed with cancer. After surgery I began chemotherapy and am currently halfway through my 18 weekly treatments.

The effects on my body have been profound. I have a scar that runs from my upper to lower abdomen, a broviac catheter installed in my chest to receive the weekly infusions. The most obvious change of course is my bald head. After coming home from a trip to the doctor with my husband I removed my wig in the bathroom and looked in the mirror and although it was depressing to see my pale skin and hairless head I realized I was still standing. I moved to the hallway where the light was shining in from the window and snapped this selfie. What I saw when I viewed it was a strong woman who is fighting for her life and still standing. 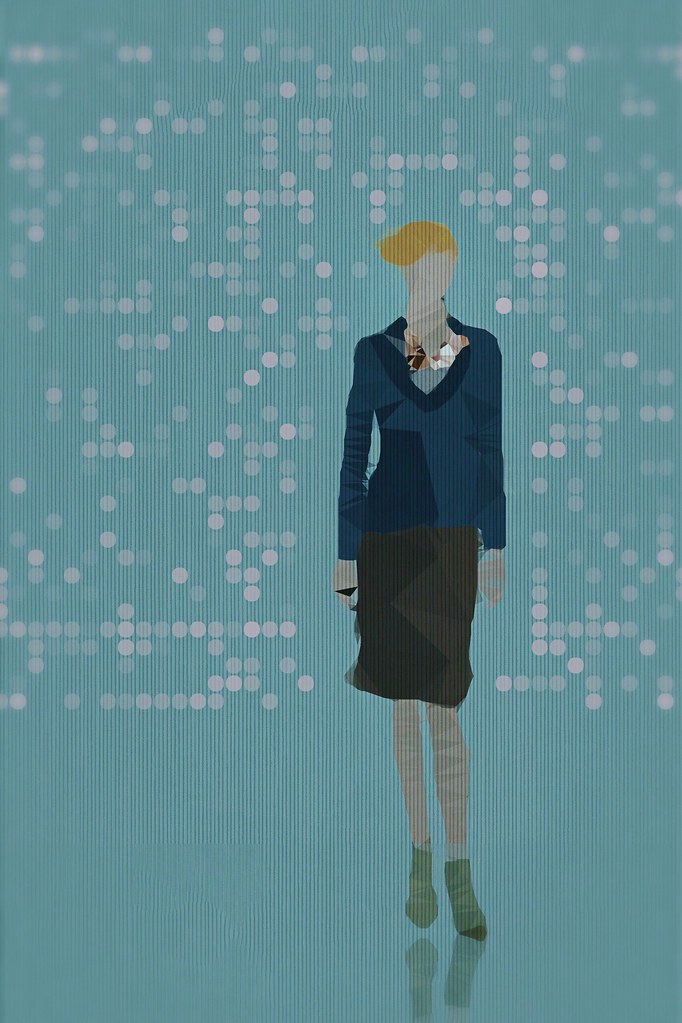 woman in spring by jun yamaguchi

Apps used: iPhone 6 Plus Native Camera+ Snapseed
Backstory: This photo was made during a photowalk in early August 2015, a couple of days right after I got interested in mobile photography. As soon as I saw this lovely spirited girl having fun stomping on an open-air theatre stage with Chinese cornice design whose stage was about 1.6 meters high, I focus-locked at about 1 meter and propped the phone on the stage floor, waited for her to come into the frame. The shutter was released while she strode in front of the phone. I was delighted that she was curious enough to look at what I was doing with the phone, thus making an eye-contact with the lens.

Post-processing was carried out in Snapseed. The girl’s face was mildly brightened up in [Face]. Overall highlights were boosted while shadows were darkened in [Tune Image]. The top of the stage structure was slightly darkened too with the [Brush] tool.

This image is a reminder for me that it’s better to live in the present and always move on without being attached to the past. 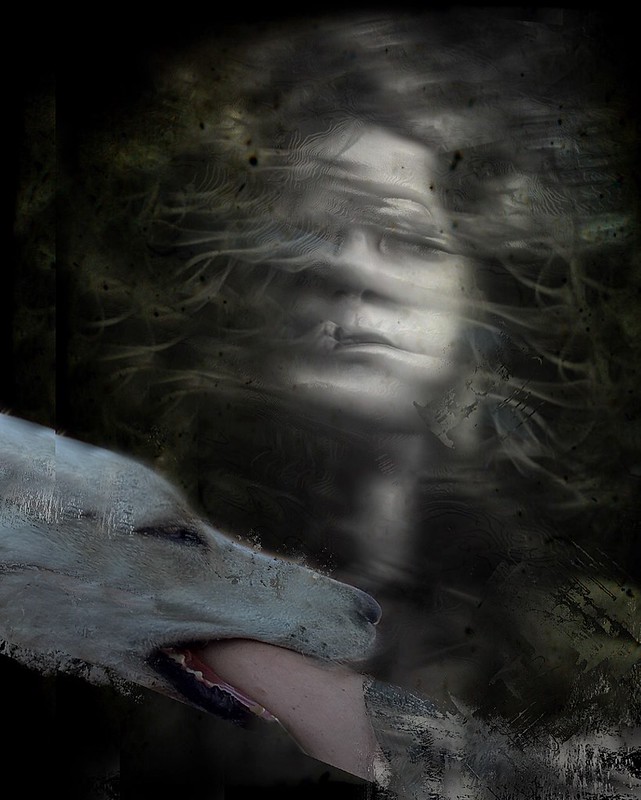 Apps used and backstory: Self portrait taken with the iPhone 7+ camera. Experimenting with glass and natural light, I edited this photo using Procreate and Snapseed. 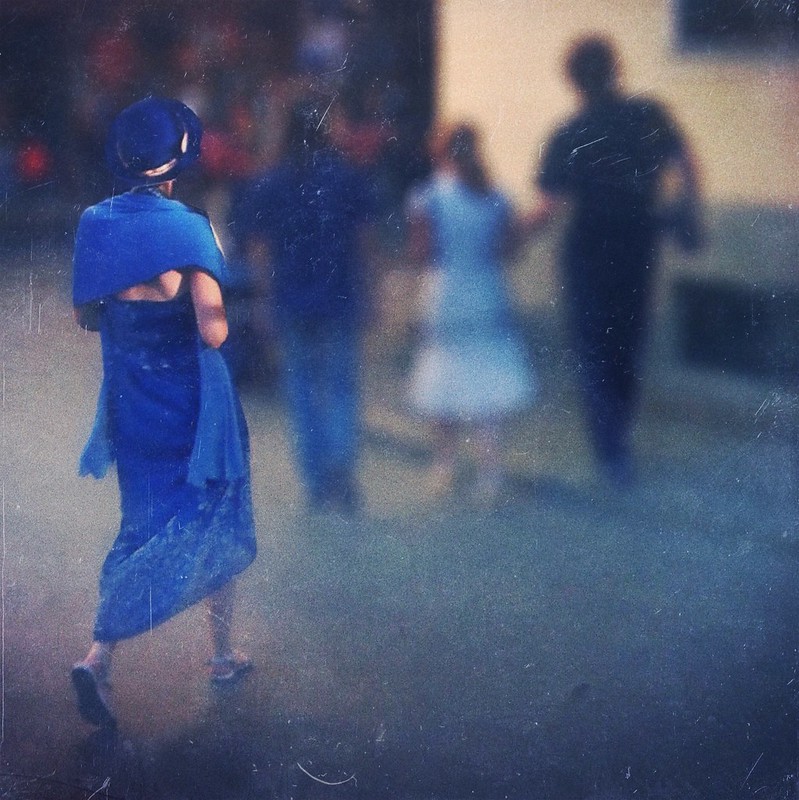 Apps used: simplehdr- mextures-VSCO with 4 preset
Backstory: This photo was taken in 2012 with my old iphone3 and reworked now with iphone 5 (love the lo-fi and I try to delay the upgrade as possible…) I used simple HDR to enhance the image, then after focus to blur the background,mextures, using my formula, for a painterly effects are normally, VSCO for the tone and flashbacks for We add a lot of grain at the end with filestorm I increased the size tragically poor of the original image

Something has to change. Un-deniable dilemma. Boredom’s not a burden Anyone should bear. Constant over stimulation numbs me And I wouldn’t have It any other way. It’s not enough. I need more. Nothing seems to satisfy. I don’t want it, I just need it… by Kristie Benoit

Apps used and backstory: For this image, I shot using the Lightroom Mobile app, self timer, and a tripod. The initial edit began in Lightroom, for the black and white portion of it. I then used Icolorama, for the blur effect. I finished it with Mextures, using the dust/dirt & grit/grain filters.
I paired it with the lyrics from a song that I thought went perfectly with the feel of the image. 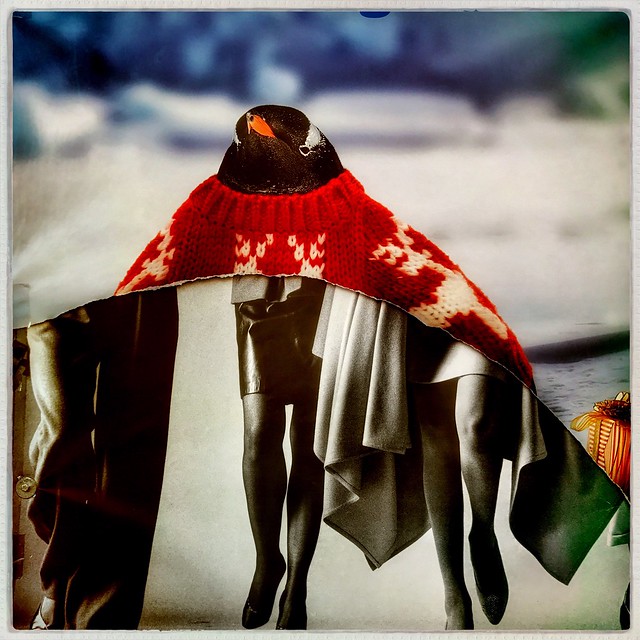 Apps used: iPhone 7+ default camera, applied basic editing with Snapseed, then edited in Hipstamatic (Akira lens, Robusta film).
Backstory: I had just come out from a visit to the acquarium in Genoa, which featured advertisments with a penguin in a Christmas sweater and my eye was attracted by a strange billboard. The bottom said “Helmut Newton” in large letters, but something seemed odd. It took a moment to realize that it was two posters: the Helmut Newton in black and white below and the acquarium one on top, ripped. The combination was irresistible. 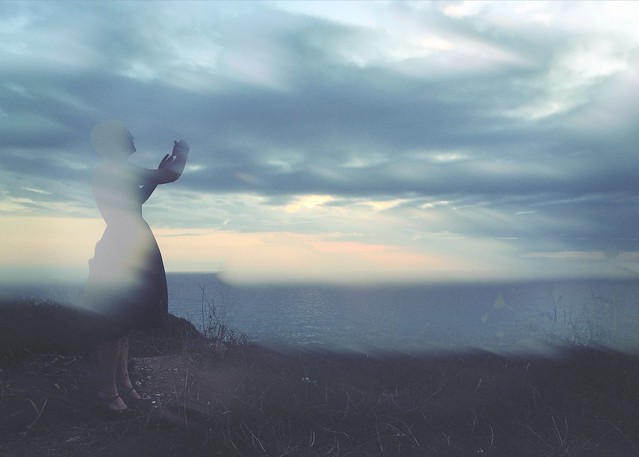 Swedish fairy merging with a Sardinian sky by Michaela Meerkatz

App used: Hipstamatic – Tachman Lens, Gotland Film, and Jolly Rainbo 2X Blitz (post-processed)
Backstory: Shot on the beautiful Sardinian coast near Alghero during the International Hipstameeting 2016 of the Hipstamatic Sardinia Facebook group in october. My Swedish friend and talented photographer Sofia Häggbom was taking a picture of the beautiful sunset. I loved her silhouette against the cloudy sky and the sea and Tachman lens gave it a dreamy, Magritte-like feel which I like very much about this photo. Unfortunately I don’t remember the film I used.

My dear deer by Suzanne Beard

Apps used: Snapseed and Mextures, shot on iPhone 6S
Backstory: My teenaged daughter, a makeup-artistry enthusiast, stayed home from school with a cold one day just before Halloween. With some time on her hands, she began to explore the possibilities for Halloween dress. I think her deer makeup and monochrome brown clothing speak perfectly to how a teen may approach this holiday. I was awestruck. 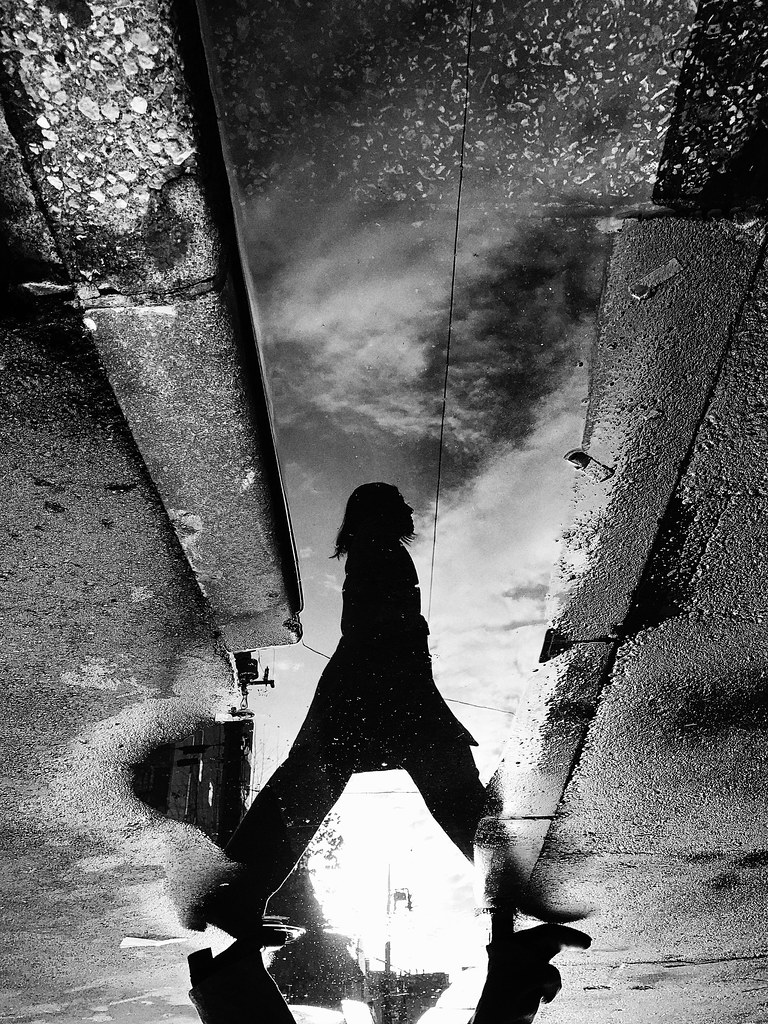 Apps used and backstory: This photo was taken in Nakameguro, Tokyo. There’s a great puddle that forms after the rain and, provided I’ve got time, I usually stop by to take some pics quickly. It’s funny as I’ve taken a bunch of photos there but they always come out different depending on how much it rained and the light. On this particular day it had been raining heavy and then this beautiful sunlight came out after which was perfect. I then had to wait a bit for the right person to step into frame. After I made a dew minor adjustments in Snapseed and applied a noir filter. 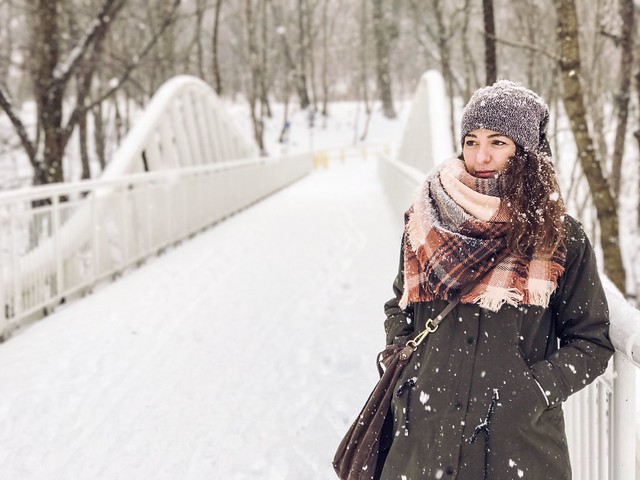