The quietness of this time of the year is what I saw this week. A welcome respite from the recent madness. I actually love this time of year when we recharge, find the beauty close to us, and just be.

Apps Used: iColorama, Procreate, Stackables, Mextures
Backstory: I had this photo of me and when I use photos of me I tend to blur them. I think I look a lot better blurred! I wasn’t planning on anything in particular – just started adding additional photos and textures and blending them in iColorama. I made quite a few of these and then layered some in Procreate and ended up here. Added some additional textures and a slight frame and called it a day. 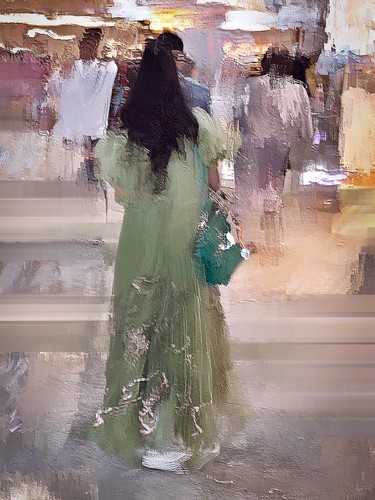 Apps Used and Backstory: When out photographing I am often drawn to the energy which surrounds people. I saw the lady in this image in a mall and captured the moment using slow shutter cam. After working on a number of edits i eventually settled on this one. I did some initial cropping and healing in Snapseed. After briefly using MetaBrush and Repix, I took the image into iColoramaS for further effects, before cropping it again slightly in Snapseed and then adding a Vignette with Enlight Photofox. I had read about a Facebook friend who was working on her healing and as the color green is said to have healing properties I chose the title “Color Healing”. 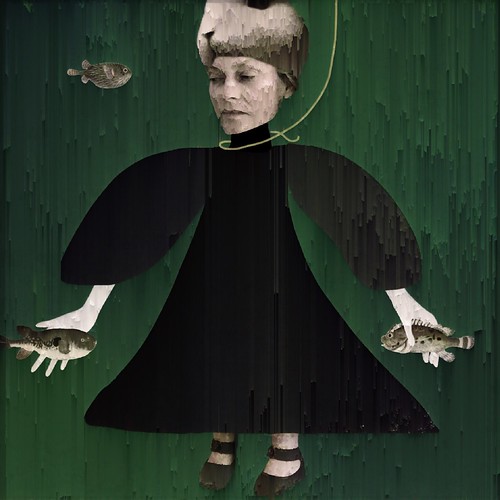 Apps Used: Superimpose, ArtStudio, Snapseed, and iColorama.
Backstory: The Truth of Imagination is an image of emotional expression. Sinking, fractured, tethered to nothing and unable to save anyone. Stuck in the hopeless muck and betrayed by my own heart – it keeps beating. 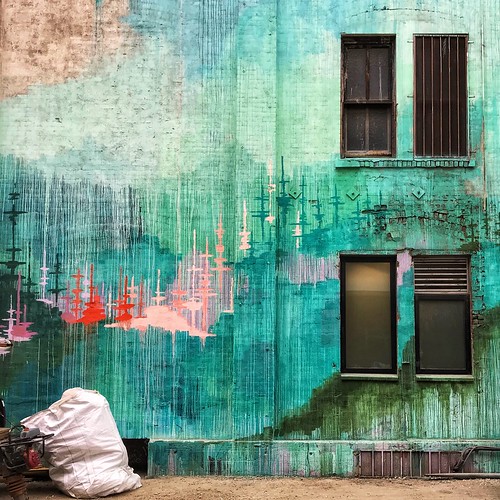 Apps Used: The photo was first straightened in SKRWT and then cropped and enhanced (contrast and saturation) in Snapseed. Backstory: This painted Wall is in the Arts District of Downtown Los Angeles. I was drawn to the vibrant colors, window variations, and the white sack in the corner. 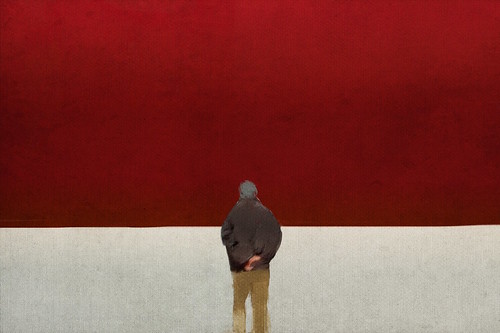 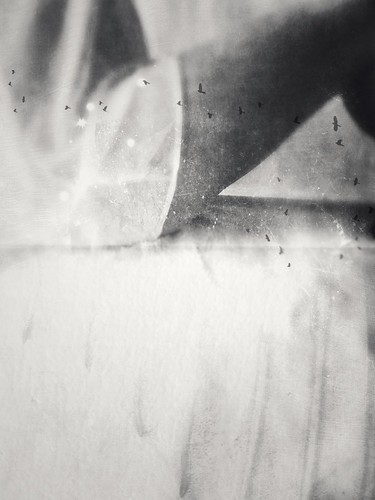 Apps Used: I shot this with my iPhone 6+, using a Tripod and timer. Edited in Snapseed, Formulas, Repix, Distressed FX, and Image Blender. Backstory: Shot in my studio, a foggy day in January. As a kind of Art Journal, I was playing with shapes and textures. The upper part of the image is my body and the lower part is an older image; and it’s actually a close up of a fish fin. Edited into an abstract shape. I love joining images, to create a visual story for the viewer. 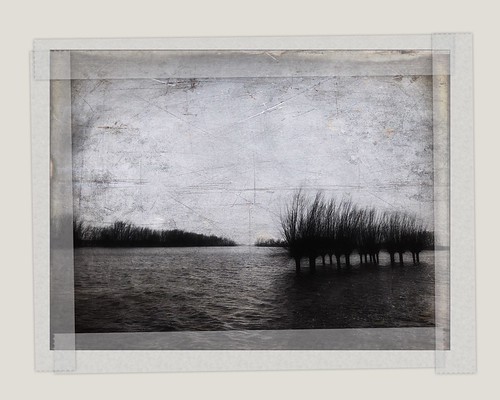 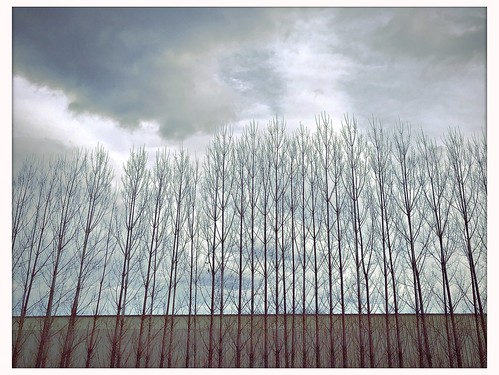 Apps Used: This is a Hipstamatic shot using the combo Stavros/Blanko/Apollo. Backstory: I’ve photographed these trees many times. I’m drawn to the graphic quality of the trees perfectly in ratio to the stable behind them. I caught this image with the clouds behind the trees setting them off perfectly. 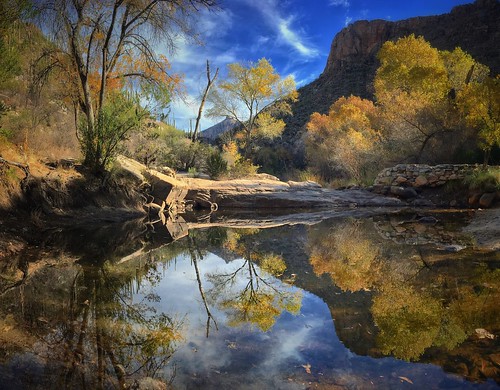 Apps Used I took this photo with my iPhone 6s. For a bit of exposure correction, I used snapseed. The ability to selectively brighten and increase the saturation and ‘structure,’ especially of the foliage in the reflection, allows for powerful editing; you can really bring out what the eye naturally sees, bringing balance despite some of the limitations inherent in the iPhone’s native camera.
Backstory: I feel fortunate to live near trailheads that can take me to scenes such as this. For years now, I’ve been running and hiking in and around Sabino Canyon, in the Santa Catalina Mountains on the edge of Tucson, Arizona. The changing seasons in this desert oasis never get old. With my iPhone on a wrist strap, I love documenting the changing light and vegetation of the Sonoran Desert while running after work and on weekends. This particular spot is just off the main trail, and even during dry times, this reflecting pool remains. Fall arrives late in this part of the desert; the cottonwoods’ autumn color usually peaks in late December, lingering even into January. I took this photo during the last week in December, when the canyon is just glorious. 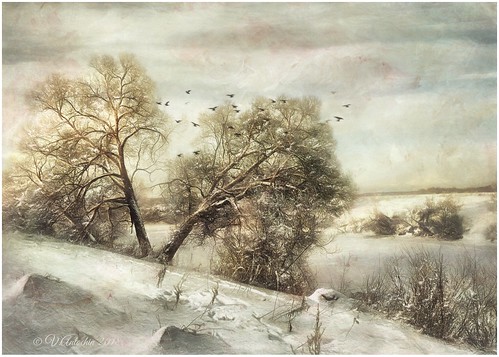 Apps Used: Processed in Snapseed (Primary) and the main iColorama (texture). Backstory: Photographed on a frosty evening, an hour before sunset, on the shore of the frozen river. 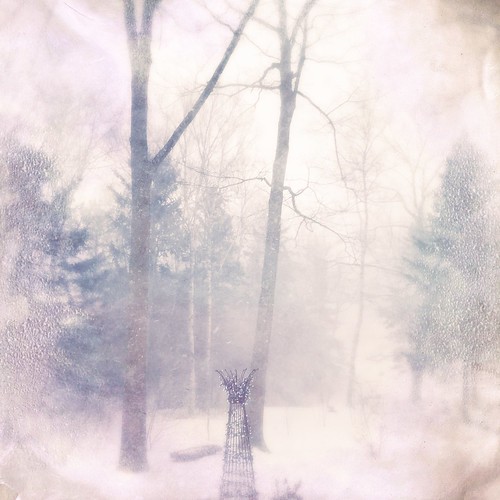 Apps Used and Backstory: I took this photo in the middle of a raging blizzard here in Maine. I used the new “Frosty” lens, which was released by Hipstamatic at Christmas. I love the texture of this lens and was happy that it captured the snow swirling around and the beauty of the storm.