Some great agitated abstracts this week balanced with some more geometric and formal constructions. There were some strong contenders for the lead spot this week but Laurence Bouchard’s strong composition coupled with his great backstory of how he contrived this shot won the day!

Rounding out the rest of the group are the following top iPhoneography talent: Cristian Margarita (Frelu), nikkortumblr, Remi, Elliot Lyons, and Anne Highfield.

IMPORTANT CHANGES TO THE GROUP:
It is a real pleasure for Bob and I to pour through the weekly gallery each week of your images. We love reading about the stories and techniques behind the images and then sharing the best of them with the world. This can take a few hours to put together, and can even longer when image-sharing is disabled on a Flickr member’s images.

Therefore, to save time, we have decided that images that have image-sharing disabled turned on in their settings will no longer qualify for possible inclusion in the weekly selections. We will also be posting this message on the Flickr group.

f you would like to be considered the weekly gallery, join our iPC Flickr group by clicking here. 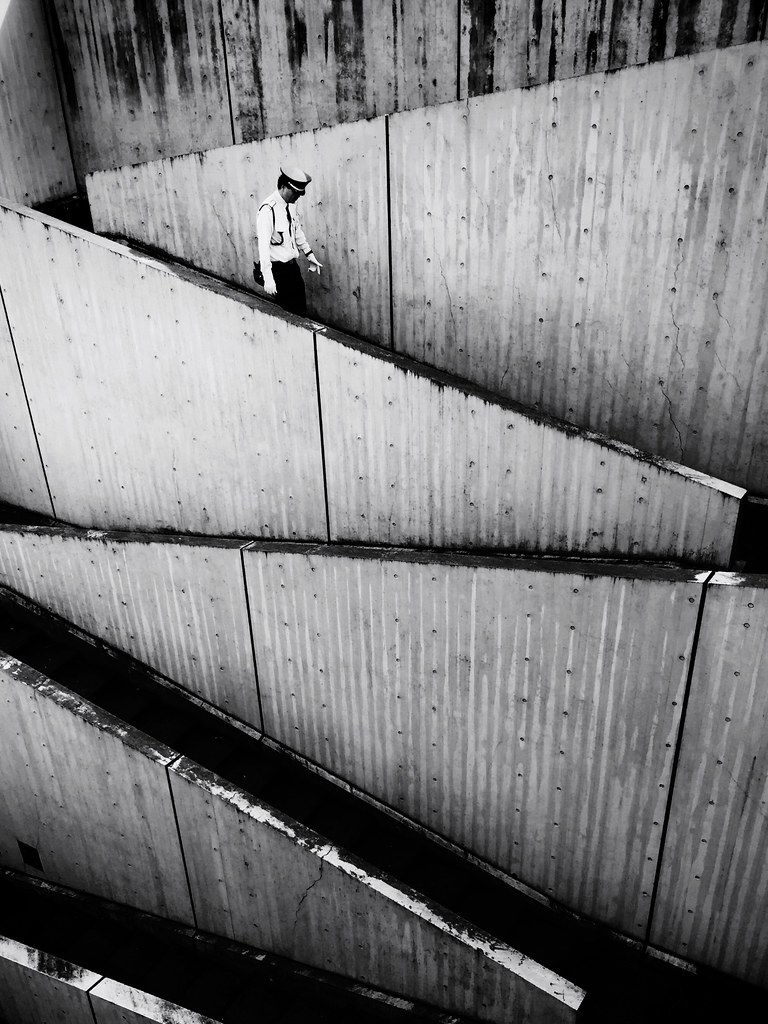 Apps used: I shot the photo with the iPhone default camera app and edited it in Snapseed and Hipstamatic (Sergio lens and Liberty film).
Backstory: I’d been researching interesting stair locations and I found these cool stairs at Ueno’s National Museum of Western Art in Tokyo. One sunny afternoon I had a slightly longer than normal lunch break so I decided to head over to take some photos. I’d imagined that there would be lots of people using the stairs & I’d be able to get some cool shots.  However, when I got there I found that the stairs were locked.. I waited around a few minutes feeling a bit frustrated as it felt like a wasted trip – and a photo of an empty set of steps wasn’t so interesting. I noticed a couple of security guards walking around so I decided to do something a bit cheeky and drop my sunglasses case at the bottom of the stairs. I then explained to the security guard and he promptly set about retrieving them. I took a series of shots of him walking up and down the stairs, thanked him and headed back to work. I then made a few adjustments in snapseed using the noir and vignette filters. 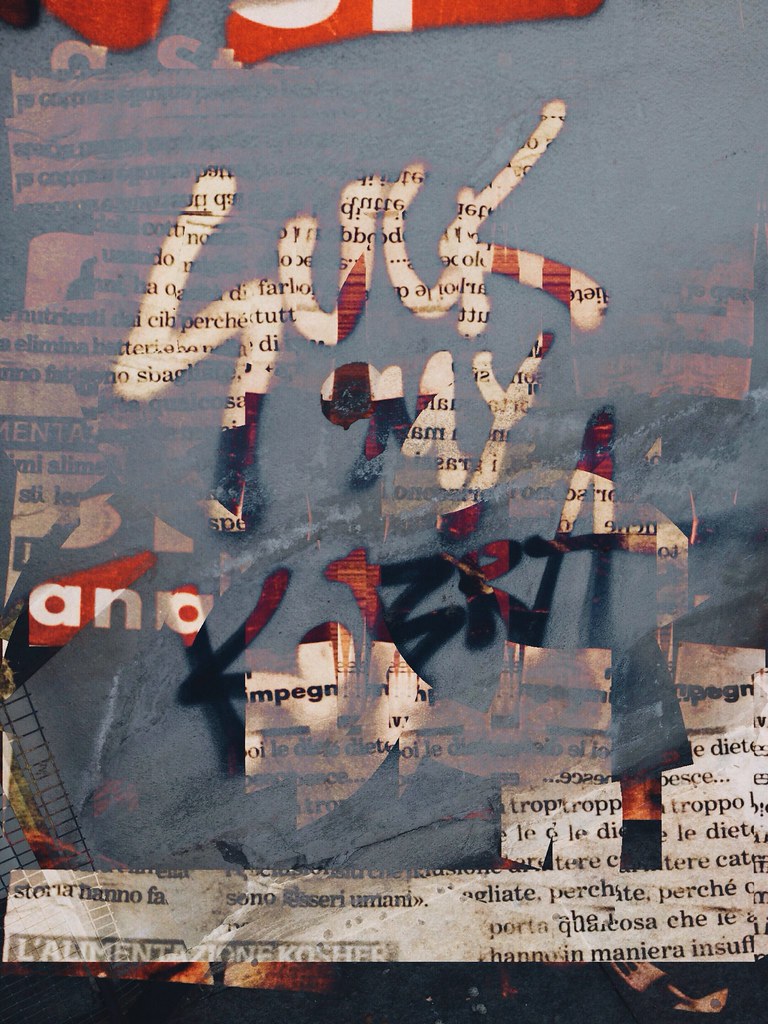 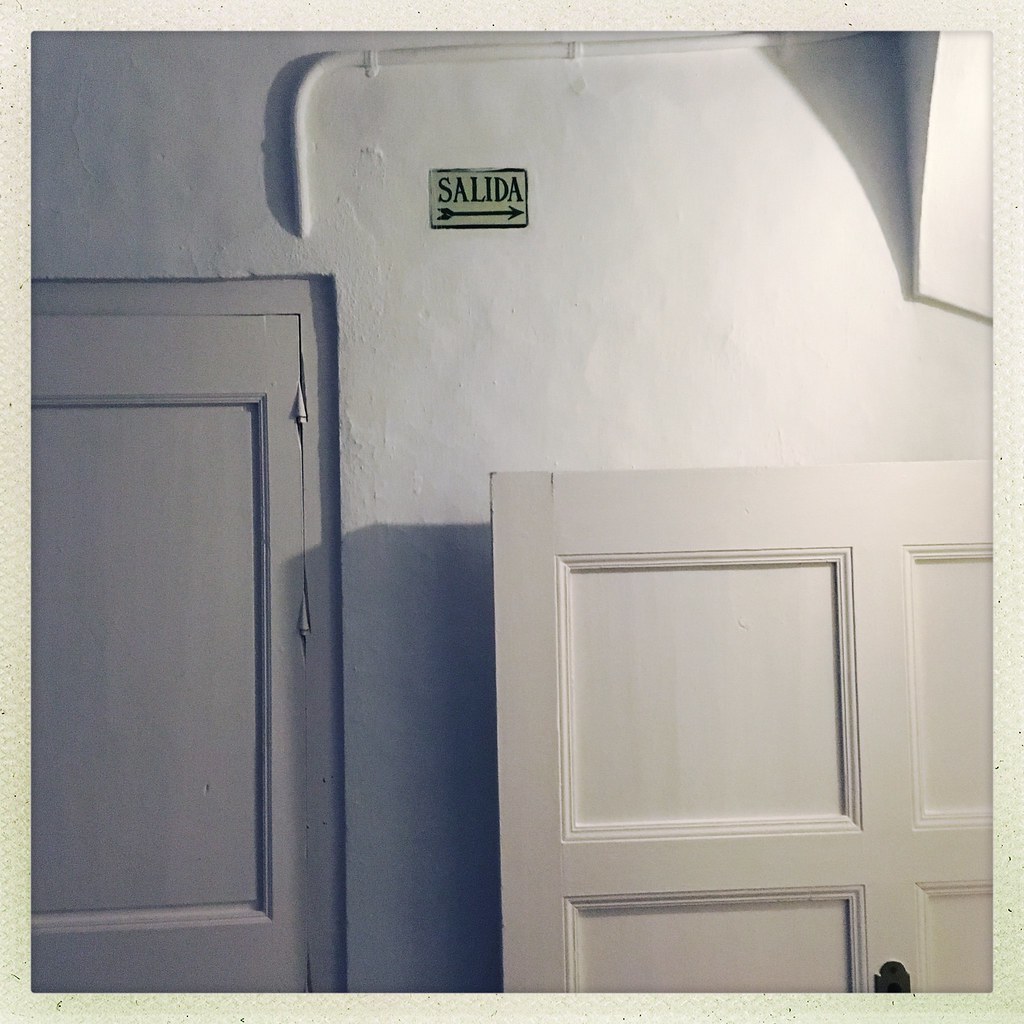 Apps used: I used Hipstamatic with Jack London Lens and Ina’s 1982 Film, this is my current combo, I use it all the time. Backstory: I shot this scene in a wonderful house in Arcos de la Frontera. It is an old mansión that has preserved the rustic spirit of the palaces from the Cadiz mountain range. It’s named “La casa Grande”. During the mid XX century, the famous dancer Antonio Ruiz Soler, internationally known as “Antonio”, was the owner of this mansion. I dont know exactly why this composition works, i simply felt i had to frame it like that. 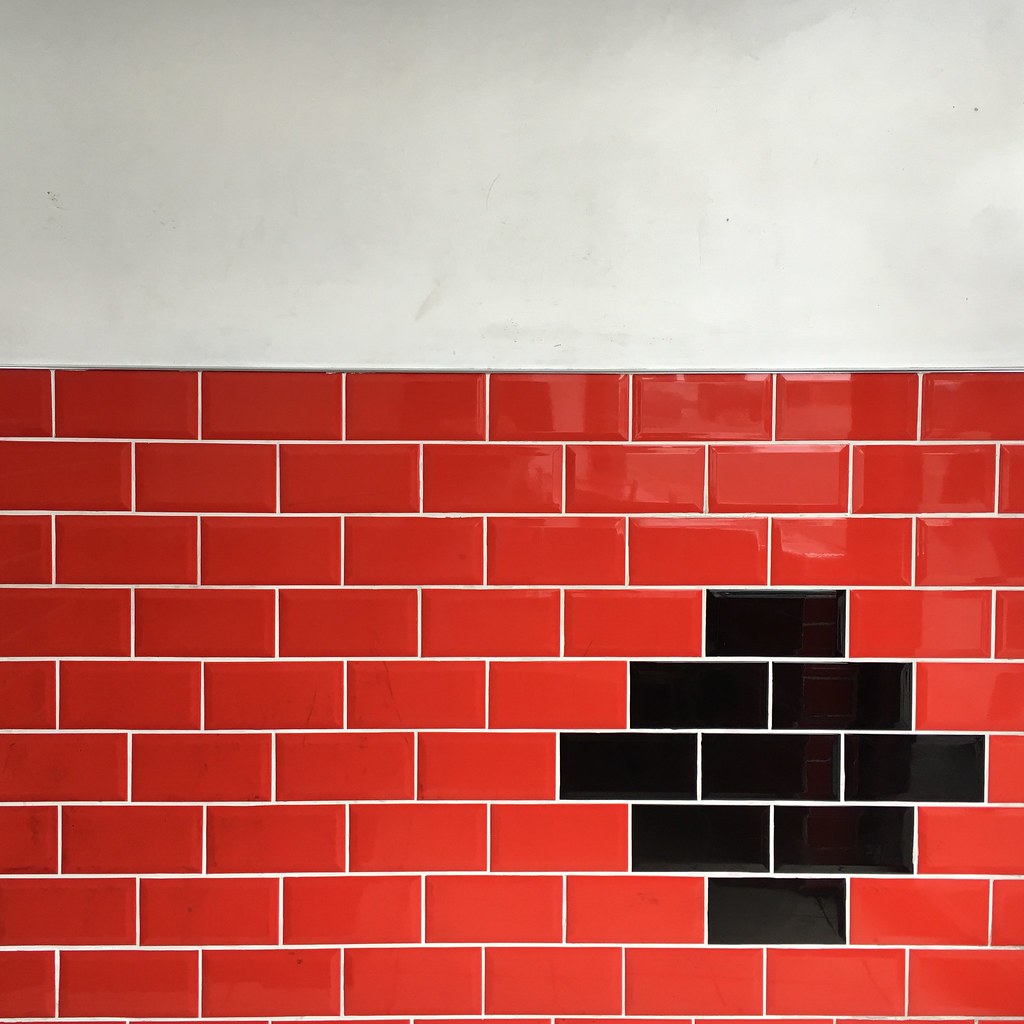 Apps used: Apple iPhone 6s Backstory: It’s a wall at Chinese take away. So back story is simple. Keep looking for a photo opportunity more photos on Instagram @remi_iq @all_about_abstract 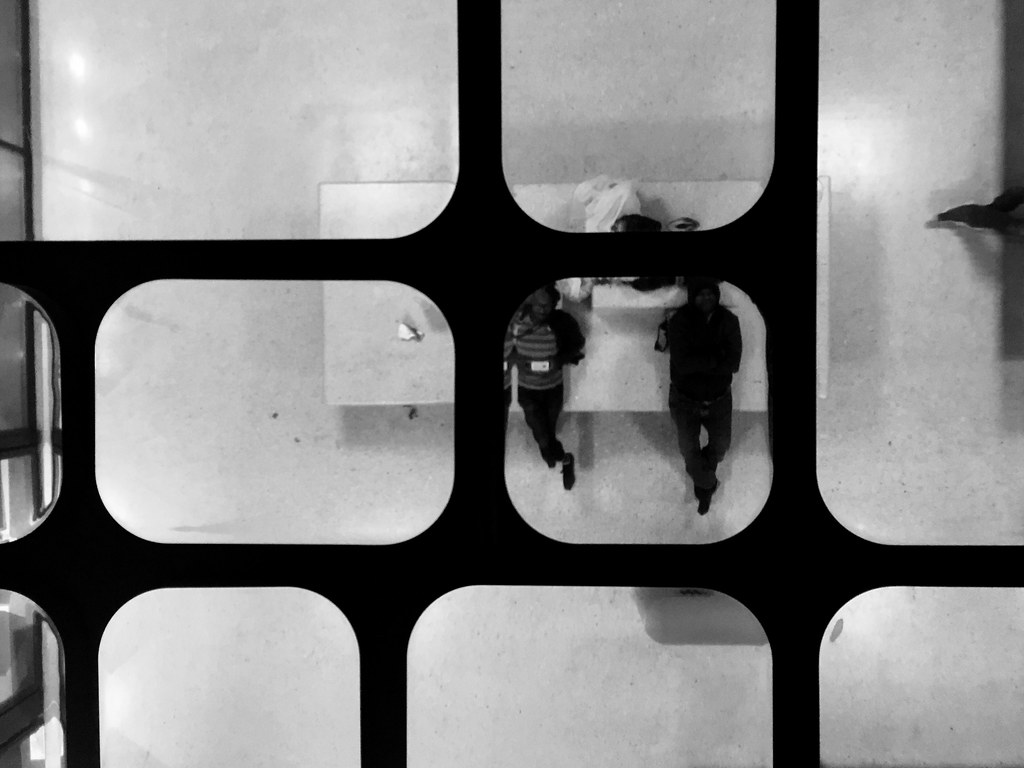 Apps used: Shot with iPhone native camera app using noir setting. Edited with Snapseed.
Backstory: It was about 1:45am and I was waiting for the train at Amsterdam’s central station. I saw this guy sleeping on a bench – I took a picture of him and then went to get some food at a place facing the bench. While eating I looked up, because you never know what’s on any given ceiling – that’s how I got the idea for this picture. I sat down next to the guy sleeping (I’m on the left) and took a few snaps. This was the picture with the least traffic in it, and I chose it for this reason (it also conforms to the golden ratio, more or less, and that’s pretty cool).

Technical stuff: took the photo with the iPhone’s native camera app using the noir setting, and edited the picture with Snapseed. Put the phone on my lap with the camera on one the left side of the picture initially, but that didn’t work so I switched it to the right, on the side of the sleeping dude. Used the volume buttons for [to activate] the shutter. 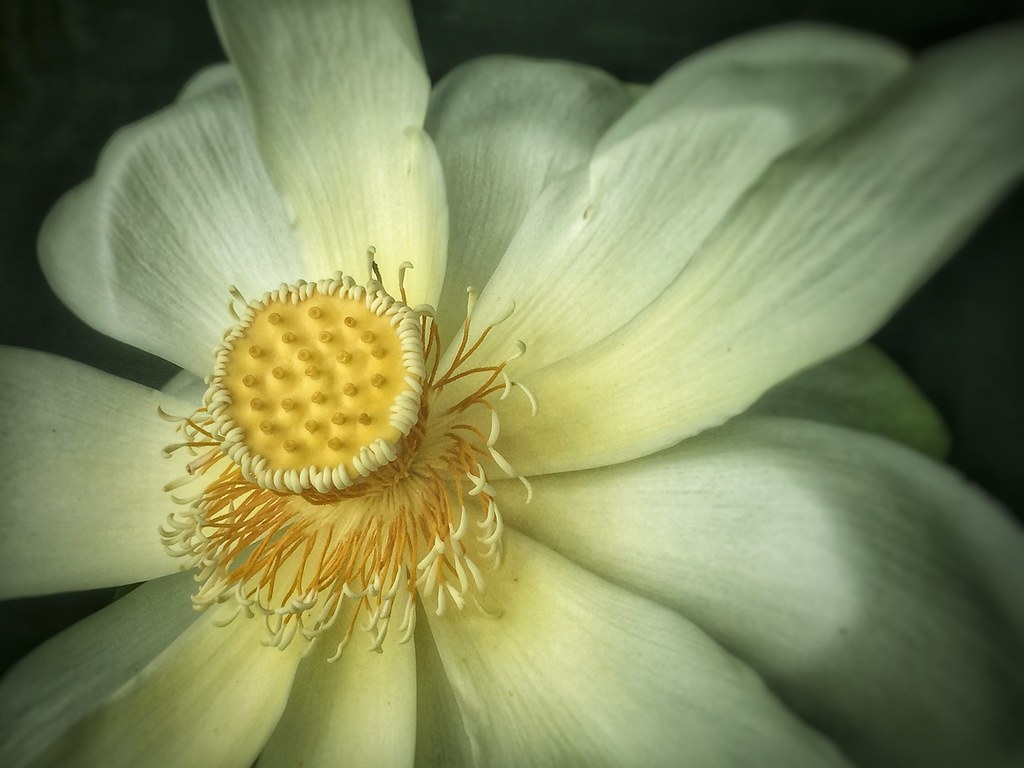 Apps used: Shot with iPhone 6 and edited with Snapseed. Backstory: For a few weeks each summer, the Chesapeake Bay tributaries show off their magical crop of American Lotus blossoms. I accessed these by kayak on Turner’s Creek in Kennedyville, Maryland (USA). Positioning my kayak in the thick crop of Lotus blossoms and their strong, floating leaves was an adventure. The sun and wind were also presenting some challenges, but I had plenty of time to wait and properly stage my shots. I took 100 or more pictures, waiting for the sun to vanish behind the thin clouds each time. This one, in particular, is my favorite of the day, needing only a few edits. I used Snapseed to increase the drama and decrease the saturation, which brought out the detail lines in the petals a bit more. I am not sure why, but this seemed to give the image a bit of a pretty glow as well. Because I shot straight down on the blossom, the dark water provided a nice blackish frame around it. Lastly, I added a blurred vignette around the edge of the Lotus to draw the viewer’s eye into the glorious seed pod.