[Selected by Bob Weil] This week’s Apps Uncovered leads off with a scene captured near Maidan square in central Kiev in Ukraine. The crowds are in protest of the government’s recent bad faith actions number in the hundreds of thousands – erupting in the phenomenon known popularly as “Euro Maidan.” An absolutely critical chapter in the cause of world democracy continues to unfold this weekend as the people of Ukraine rise up against government corruption, cronyism and challenges to the rule of law. This weekend and in the coming days, they are at great risk of being attacked by outsiders brought in by the president to beat them back. The President of Ukraine had promised to sign a trade agreement aligning the country with the EU, and instead, he suddenly caved to Putin’s threats of sanctions – and has resumed a march toward alignment with that dictator’s attempt to re-establish a post-Soviet bloc and sphere of influence. Please join the free world in lobbying and praying for the victory of democracy over tyranny. As opposition leader Vitali Klitschko said in today’s Wall Street Journal – “In these hard days, the moral support from friends of democracy is very important.”

Other inspiring images this week hail the beauty and austerity of the city and celebrate the season of Christ’s birth. And of course, no collection would be complete without some surreal and thought-provoking images that convey the angst of life in the modern world.

[The views expressed above are strictly my own. – Bob Weil] 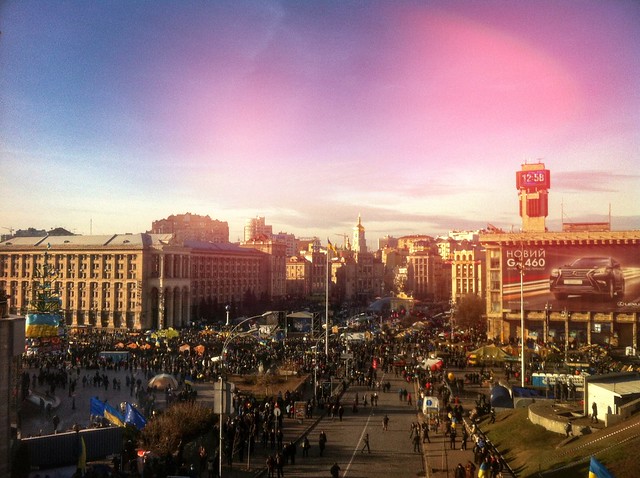 Backstory: EuroMaidan is all about people, every single one who dared to disobey, and about everyone all together as a force of change. My picture represents the second part of that idea – that we are all together because we want change. 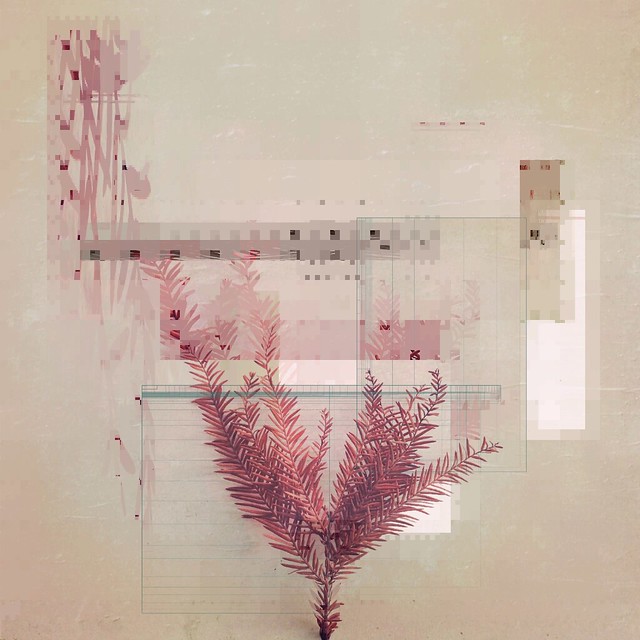 The City Limits by Luxtra

Backstory: I was passing time, waiting for a mailman to distribute mail, when I began looking about and noticed how these reddish pine-like leaves were beneath my feet, falling from nearby trees every time the wind blew.

They struck me as being pretty and when one fell on my foot, it seemed a sign. I collected a small bunch of them and carried them home along with my mail.

At home I arranged them until they seemed right, and then photographed them with Hipstamatic. Afterwards I experimented with the result using Decim8. Going back to the original photo of the leaves, I added several rectangular outlines using Deco Sketch. There may have been further experimentation with Decim8 – I wasn’t writing down the process so can’t recall for sure. In any case, I combined the two versions using Superimpose in order to give the sense of buildings with windows behind a tree of sorts.

My mind immediately – thinking of this combination of the man-made, the spiritual, and the organic – thought of one of my favorite poems by A.R. Ammons: The City Limits, which became the title of the work. 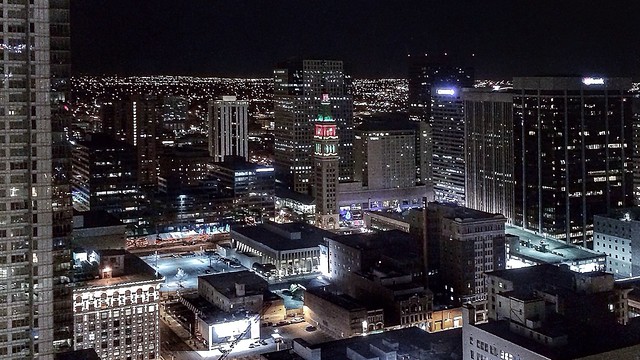 Downtown Denver lights at night from the Hyatt Regency by MomentsForZen

iPhone 5s – Photographs taken with the camera on an iPhone 5s.
PureShot – A series of 3 images were captured with different exposure settings.
MobileHDR – The 3 input images were combined into an HDR composite image.
Snapseed – Structure and Ambience filters applied. Overall lighting adjustments carried out.
Leonardo – Image cropped to 16:9 format and resized to 3264 x 1936 pixels. Noise reduction and Sharpening filters applied.
Snapseed – Selective lighting adjustments carried out to darken and reduce the contrast in the sky region.
ExifEditor – EXIF data from one of the original images transferred to the final image.

Backstory:
Another shot of the city lights from my room at the Hyatt Regency, Denver, Colorado (USA) – spectacular!

At Christmas, the Daniels and Fisher Tower is lit up in red and green floodlights.
en.wikipedia.org/wiki/Daniels_%26_Fisher_Tower

The set of white tents and stalls with lights adorning the trees to the left (west) of the Daniels and Fisher Tower are the German Christkindl Markets. These open-space markets operate in the month leading up to Christmas.
denverchristkindlmarket.com

Dominating the lefthand edge of the picture is the Spire Building
www.spiredenver.com

The lights stretching out to the horizon give a very good impression of how flat it is in Denver once you leave the foothills of the Rockies to the west. 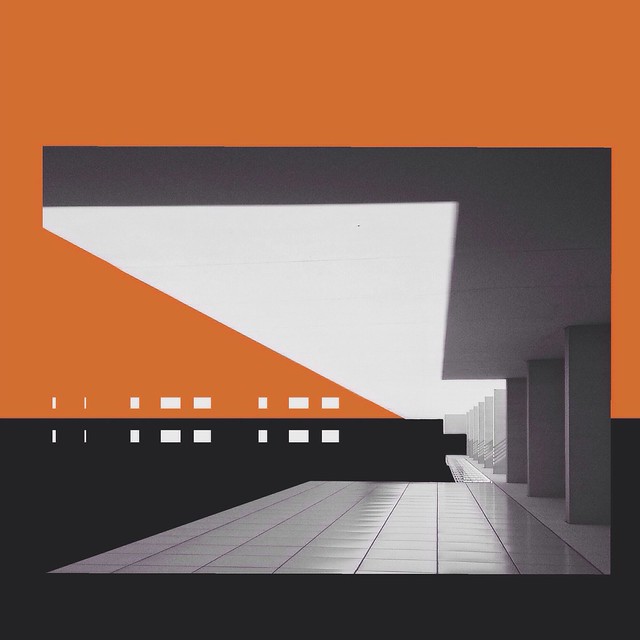 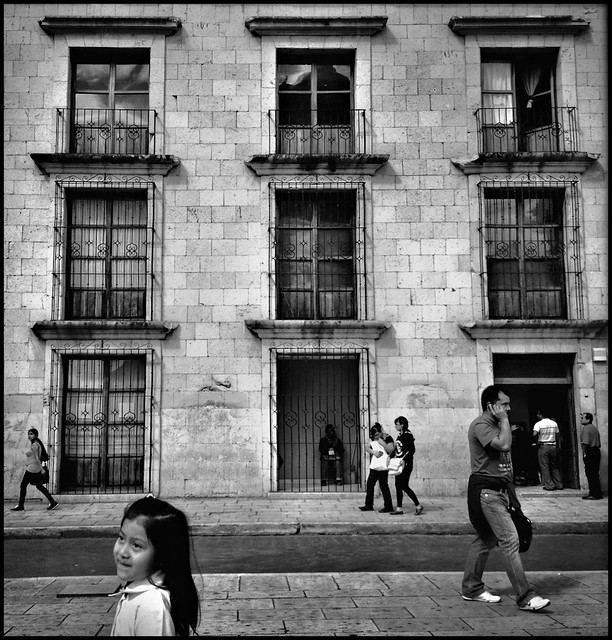 Backstory: This was one of a few images used in a photo essay I did during a David Alan Harvey photography workshop in Oaxaca Mexico last month. I’m a big Cartier-Bresson fan (who isn’t? ), so I’m usually on the lookout for some sort of unfolding decisive moment. The compositional balance here is far from perfect but the sweet expression of innocence on the little girl’s face made this shot for me. 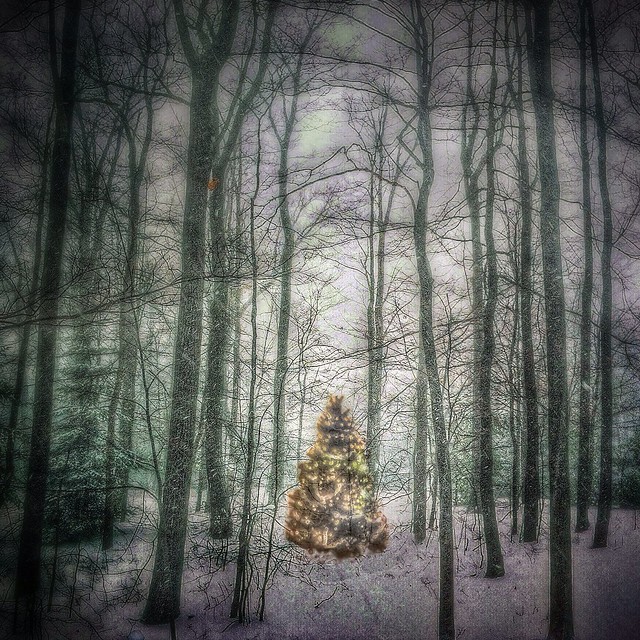 Be the Light by Anne Highfield

Apps used and Backstory: One of my favorite children’s Christmas stories is “Night Tree”, by Eve Bunting. It’s about a family with a splendid tradition of decorating a tree in the woods by moonlight as a gift for all of the animals that live there. This year, when I snapped the usual photo of our Christmas tree in the living room, it looked so ordinary – no matter what I did to it. Then, I thought of the Night Tree and the ordinary became a little less ordinary. I found a series of snowy forest pictures I had taken about a year ago and tried blending a few of them with the ‘tree in the living room’ photo. When I found the perfect match, I used Image Blender to re-size the tree and blend the two images. Finally, I took the blended image into Snapseed for some cropping, a vintage filter, and a vignette. I also did some ‘selective adjustments’ on the tree lights which were originally much too warm against the cool tones of the forest. 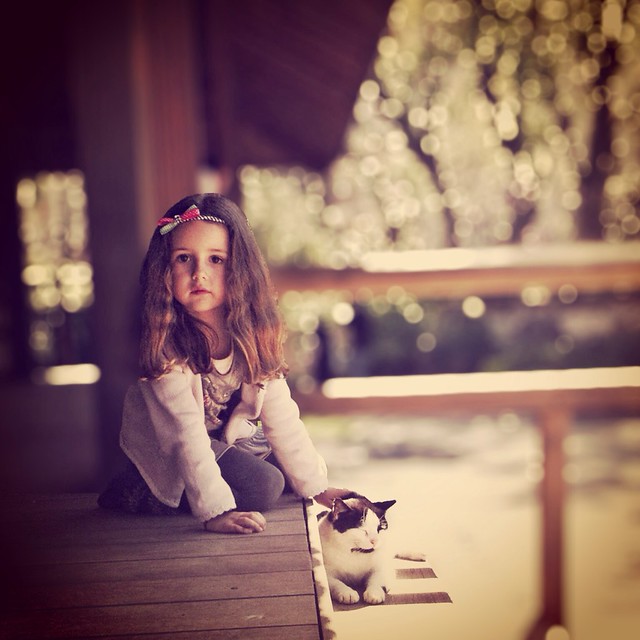 Backstory: This photo was taken in the Japanese garden in Toulouse, France. This cat looked like a usual inhabitant of the place, getting attention from the visiting children. This little girl sat a long time with the cat… I sat nearby and took this picture. However, the background was too present and too sharp and I wasn’t quite happy with it. I recently came aware of the Tadaa app, and found that the bokeh effect combined with the filter used added the softness I wanted.

Backstory: I knew of a church that decorated a huge tree with lights at Christmas.
I was doing an errand and it had been snowing for awhile. I decided to swing by this church located on the main street in town. It was very cold and windy and I took several shots with near frozen hands. But the scene would not let me quit early.

On a literal level,I wanted to capture the lights, the blowing snowstorm,the night and some of the sparse traffic. That in itself was sufficiently beautiful.

However,the image is also rich in symbolic associations.The solitude,the lamplight, the whirling snow caught in that light, the tree lit against the night all seemed to resonate with a light in the darkness motif. Even the name of the church,Friedens( derived from German for “peace”) and the small,visible Cross on a dedication stone contributed to that impression.

Backstory: Its a bit of a tropical dish – fish ( dorade ) roasted a la plancha. A variety of different beans with curry, limes and green chilies. Served in a beautiful, old baking tin.

View of Christmas by Greg German

View of Christmas by Greg German

Apps used: I took and edited the photo using my iPhone 5S. The standard camera app was used and all editing was done with iPhoto. Most of the editing involved cropping, along with some delicate exposure and contrast adjustments. My go-to editing apps on my iPhone are iPhoto and VSCOcam. Some of my work with VSCOcam can be seen at greggerman.vsco.co

Backstory: The shot was more or less spur-of-the-moment. We had just received our first snowfall and I was drawn to the combination of snow and lights on the plants outside. I also liked the subtle highlight on the wall from the exterior lights.

The shot started out simply as an experiment to see how well the 5S would handle the lack of lighting in the room, the bright lights outside, and the subtle highlight on the wall. The brass tacks on the chair were a pleasant surprise that I had not noticed when I composed the shot. 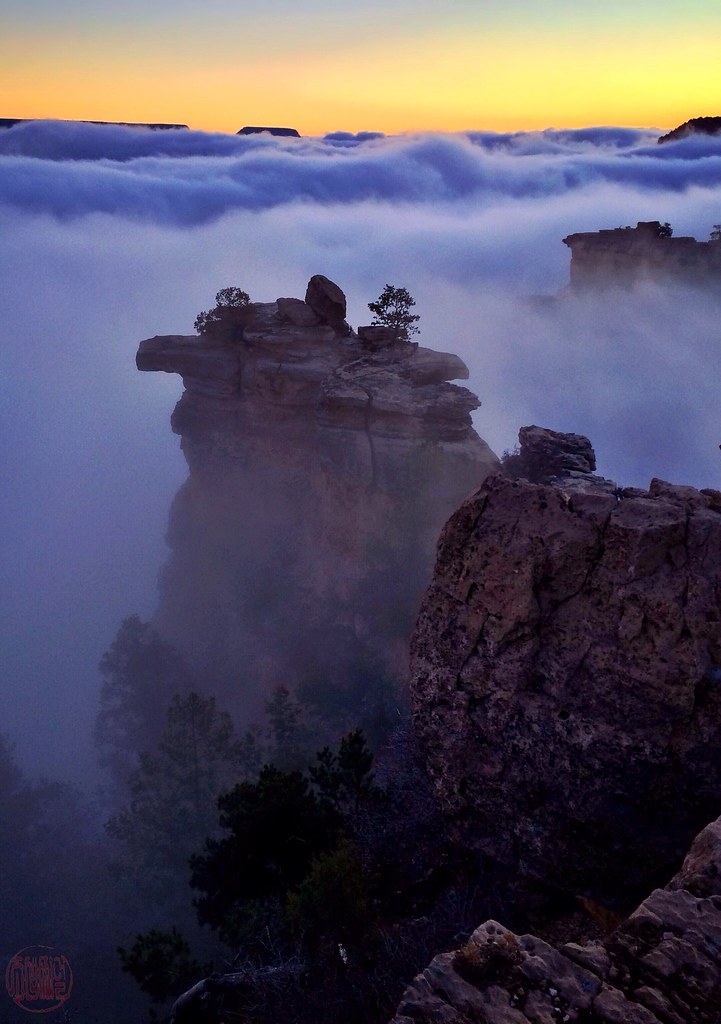 Dawn on the South Rim, over a sea of fog…Mer de brouillard à l’aube by allophile (Joseph Cyr)

Apps used: snapseed for balancing the exposure; I just love the ‘selective adjust tool’ and the ‘ambiance’ option under ‘tune image,’ and then Big Lens for slightly smoothing out the sky, which was a bit grainy due to the pre-sunrise low light conditions.

Backstory: When I was at the Grand Canyon last weekend, I had no idea that the sea of fog I saw in the morning was a rare once-in-a-decade or so inversion. It was definitely beautiful, and now that I look back, what a privileged moment to be there… (iPhone5s)

A couple of weeks ago, I went to the Grand Canyon for a couple of days; I hadn’t been in a few years, and I also had a little bit of fact-finding to do for a project I’m working on. In the past the timing hadn’t worked out to see sunset or sunrise over the vast chasm, so I made sure to include time for that in this trip. As I arrived at dawn and made my way to the edge of the South Rim, I saw that the canyon was filled with a sea of fog–I didn’t learn until later that it was a rare inversion, a climatic phenomenon that only occurs once a decade or so in the Grand Canyon–definitely a privileged moment! I meant to take some photos of the sunrise and the morning light spilling into the gorges below, but instead, the play of light and fog ended up stealing the show. I took this particular photo just a few minutes after arriving. While the sunrise a half-hour later was indeed spectacular, this shot ended up being one of my favorites.

This particular tree-topped outcropping, disappearing into the roiling mist reminded me of Chinese scroll paintings and landscapes I had hiked in while in the mountains of Korea, so I decided to take a vertical shot, including just enough of the dawn sky for color, but focusing on the rocky profile and trees disappearing into the fog, masking the canyon-floor a mile below. I’m sure there must have been some visitors who were disappointed because they couldn’t see into the canyon on this particular morning, but for me, watching the waves of fog in the quiet cold–it’s one of the most spectacular landscape-moments I’ve ever seen. 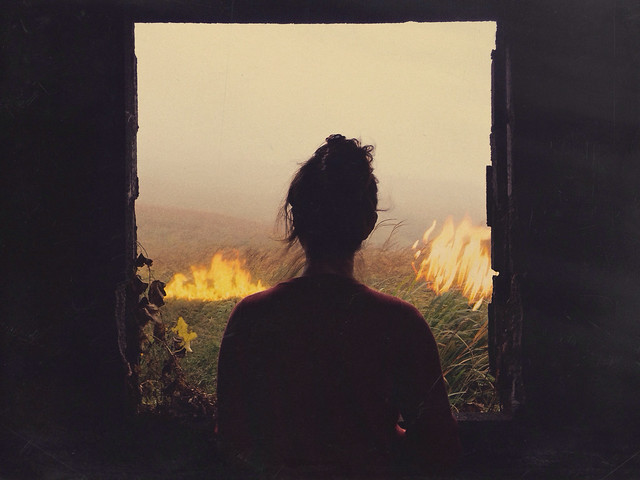 Backstory: Raw image of this photograph is my favorite. I have edited with an emphasis on atmosphere of the raw image. This place was a small ruins that was deserted.
Shooting, it was the image that field burning in my head. 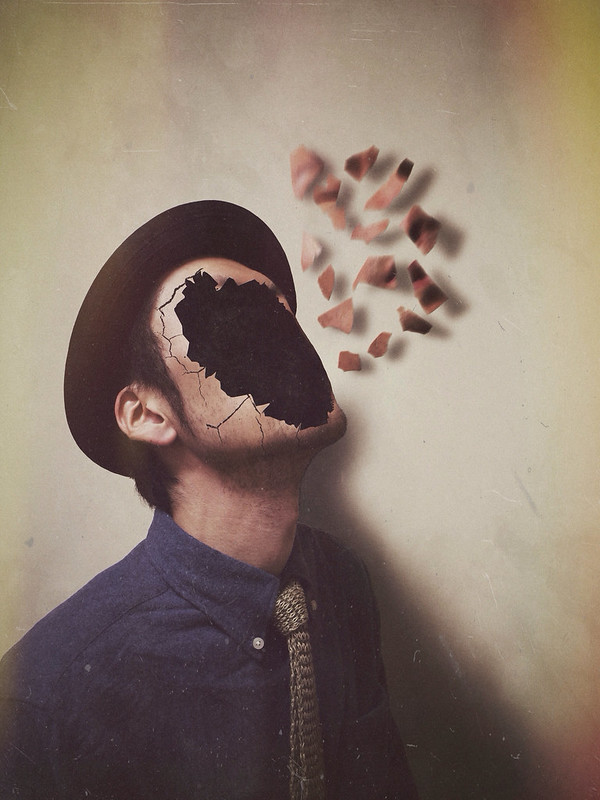 Backstory: My favorite edit is to shatter the body. I think there is an impact, and each viewer is able to imagine. I was made in the image of the cover art of old progressive rock music.