Thank you. as always to everyone who submits to this group. I hope you enjoy the gallery and please click on any of the images to see more of each artist’s work on their Flickr stream. 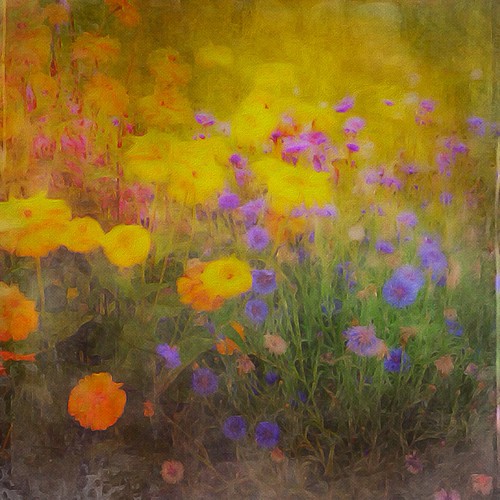 There are always flowers for those who want to see them. – Henri Matisse

Since I haven’t been able to get out and shoot new photos recently this is actually an older photo I took last year. I have been going back and re-editing older photos a lot recently. I love flowers and liked the colors of this one. I have recently been doing a lot of creating with Mextures and started with that app on this one. Then brought it into Faded (a new app I recently discovered) and applied one of their filters. After that I wanted to give it some softness so I brought it into Brushstroke and applied the simple filter. Brushstroke is one of my favorite apps for softening a photo. 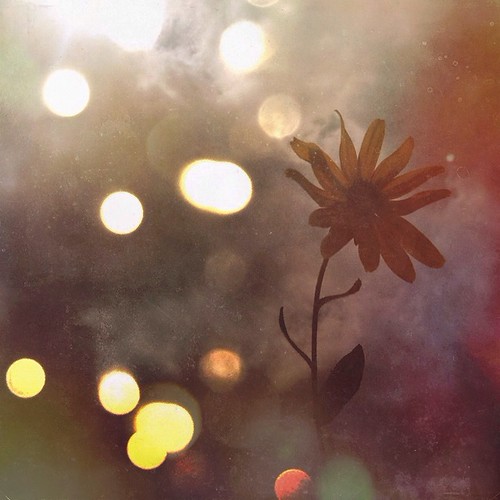 The base photo was taken with Hipstamstic/Oggl, and was pretty plain to be honest. I am lucky enough to have a whole field of Black Eyed Susan flowers growing wild by my home, and I have an obvious fondness for them. I really was stuck when I did this one, so I just started playing around in Mextures until I got a very dark, almost smoky effect. It still didn’t seem just right so I tried a few overlays in Lumie, a lesser known app that I just adore. The one I used was what prompted me to name it what I did, as it reminded me of tiny bits of the sun falling from the sky. In looking at how I created this, it uses many of the techniques that I started with when I really got into iphoneography.

Backstory: In September of 2013, I was starting a new job on the heels of being unexpectedly laid off in July of 2013. And although not an ideal life adjustment, the new location where I work now is only minutes away from a large public open space area that that has become quite familiar. Unfortunately, I missed the fall colors having not discovered this area until January of this year, but the winter proved to be an excellent time to shoot this area even more—stark, beautiful and mysterious in my eyes. For several months, many lunch hours were spent shooting in these open space areas, at various times of day, in different kinds of light and weather, but mainly gray days. The overcast skies are easier to work with when using textures, whereas blue skies, for me anyway, are more difficult to manipulate. I try to get a painterly feel in my images, while also trying to create an atmosphere or mood, the barren forest and gray backgrounds are ideal for achieving this. This image is from a large cache of photos taken in February, saved off of my iPhone and forgotten about until recently. 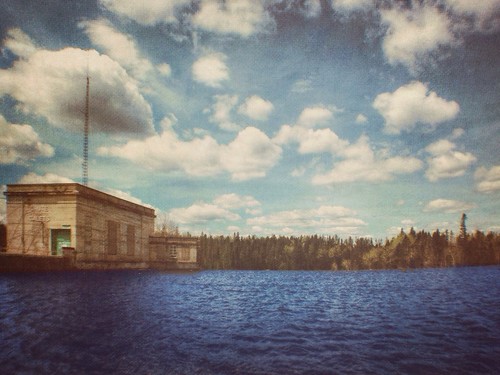 I took this picture and did most of the editing process in May and it was only this week that I decided to publish it, after doing some final touches.

The initial editing work was a common enough procedure for me employing Snapseed (Retrolux) Mextures and Stackables to create the tones and textures, and Superimpose to get the right mix (especially for tones). I was pretty happy with the top half of the picture, the sky and clouds were fairly consistent with what I wanted to get, but I had two problems with the lower half of the picture: on the one hand, the color of the water was a little too red; on the other hand, the photo taken with the Olloclip wide angle lens showed a horizon line not straight, but clearly curved.

Visually, the result was a bit strange, and it was, for me, more than just a visual issue. With landscapes, I’m used to a fairly marked and visible edit; but I realized that, for me, editing in iPhoneography should not change the image, but instead reveal more; it must emphasize what makes the beauty or interest of the landscape, or what I felt there. This landscape (a pretty big dam in the middle of the forest) was for me a majestic and peaceful beauty, and I wanted to reproduce it (and the existing curved horizon and little red tones do not really allow this).

With SKRWT, I straightened the horizon (while keeping in the frame the building on the left of the image). Then with the “adjust curve” function of Leonardo (I rediscovered thanks to Bob Weil’s online course), I created an image where the tones of blue were extremely dominant. In Superimpose, I superimposed on the picture corrected with SKRWT the one I created with Leonardo, but only in the lower part of the image. I was able to get a much bluer water. But the difference between the sky (with a little red) and water (very blue) then became too pronounced. So, I superimposed on this sky, the sky of the image created by Leonardo; I adjusted the degree of mixing in order not to completely lose the tones of the first picture.

I found, in the final result, the slightly melancholic feeling that I like in pictures and the particular impression of beauty I had experienced in front of this landscape. 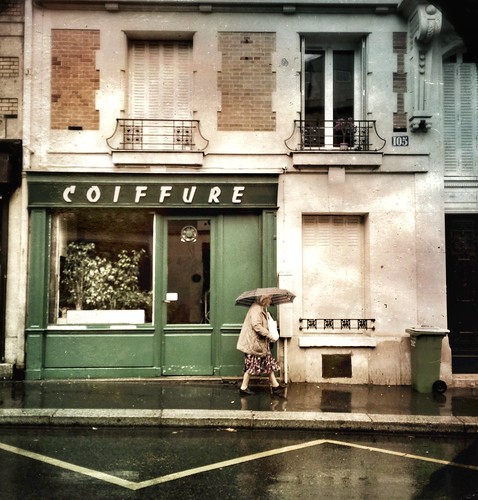 Apps Used: I took this image with Hipstamatic using the Jane Lens and the C-type plate film. I next did some minor edits in Snapseed — adjusting the brightness, contrast, boosting saturation and some straightening.

Backstory: I have always loved Paris — I don’t even really know when those feelings started but I can tell you it was a very long time ago!! This summer I was lucky to be able to spend a lot of time there, however, my love for Paris was put to the test many times. The number one challenge was the weather!!! We had so much rain, and not just light sprinklings but torrential down pours — not pleasant when wearing sandals!!

I really love the old store fronts (which are rapidly disappearing) in the neighborhoods of Paris. I was at first drawn to the vintage sign but then when the lady walked by I new I had to capture the scene. It is hard for me to describe the nostalgic feelings I have for a Paris that no longer exists – but this image seems to do the job for me! Thank you for including my image this week! 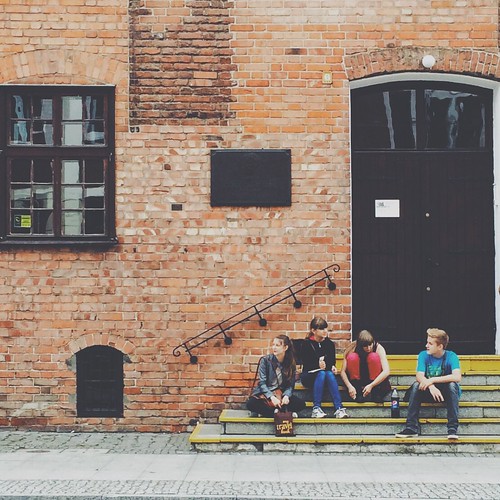 Backstory: I went for a Saturday walk with my family in my home town Elblag. I choose to walk around the old town and during this walk I saw a group of people sitting on the stairs of library. They were chilled and young and looked so fresh. That is why I decided to take a photo of them. I shot with the native camera app iPhone 5s and used Snapseed and VSCOcam (F2 preset).

This image was taken at the Friedens Evangelische Kirche,a small, historical country church in Moscow Mills, MO. It was early morning ,with a beautiful light streaming through one of the east windows, illuminating the simple altar and sparse furnishings. The church was locked so I shot through a closed window on the opposite side of the building, bracing the iPhone flush against the glass to avoid any shake or unnecessary reflections. Taken with Oggl. John S lens and Uchitel 20 film. No further post processing.

She was only there for a moment by Eraddatz Photo

Backstory: In my search for new ways to see I went back to the “old days” by standing in my bathtub looking thru the clear plastic shower curtain just to discover how the effect would impact the iPhone’s shot. Then seeing the result I utilized Snapseed and DistressFX to enhance the “ghost” feel. Of course as in most App photos discovery and imagination are the greatest joy.

Backstory:
The place I live is famous for goldfish farming. sometimes I visit there and enjoy to see various kinds of goldfish. they are so beautiful and elegant. I found this photo which I took a few months ago in my camera roll by chance and was attracted to their beauty again. so I edit it being careful not to spoil their mood especially about color and texture. 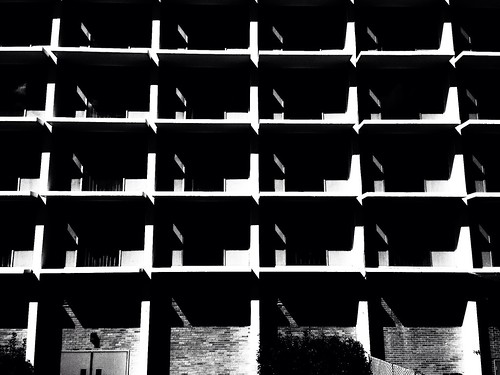 Backstory: The hotel is near my place and I’ve always noticed the shadows in the morning and afternoon sun. I used high contrast BW via Snapseed to accentuate the shadows and patterns.

The Apps used to create ‘In A Row of 4’ include:

Backstory: Though I never tire of taking pictures, I love to have an ongoing photography project. It just seems to keep things fresh and interesting. Considering that I live in a small, rural area of West Virginia, my current project is Living In Appalachia. With the iPhone camera being so handy and nearly always at my fingertips, it opens an entirely new door of opportunity for creative imagery. Sometimes the simple things, which we often overlook, mean the most. For example: If while glancing out the window I notice the breeze moving the curtain in a lovely motion or if I’m walking and see a beautiful rose in full bloom, my iPhone camera is ready to save these sweet moments. During other times while at home, I believe it’s important to remember that our hands do all sorts of busy work. From taking photographs for sharing to knitting hats for wearing, our hands are hardworking tools.

Appalachia is steeped with generations of skilled craftspeople, folklore, history, and peculiar superstitions. Over the next few weeks, I look forward to sharing my little spot in this world with you through iPhone photography. I hope you enjoy! Hugs.