“I don’t know…but I like it” by Kristie Michele Art steals the lead spot this week with her wonderfully expressive self portrait. Check out more of Kristie’s incredibly creative work on her Flickr site here: https://www.flickr.com/photos/hoodkitty/32816401267/in/dateposted/

….and ANOTHER CHANCE TO WIN this month….read on…

Congratulations to Eitan who won April’s iPC giveaway, the fantastic little wallet sized tripod, perfect for keeping that shot steady and great for long exposures and self portraits!

…and what’s more, the guys at GEOMETRICAL have been very generous and given us another pocket tripod to giveaway this May!

Simply sign up to iPhoneographyCentral, for a chance to win. It’s that easy!..and if you’re already signed up, there’s nothing to do; you’ll be entered into the draw this month and every month for the rest of this year!

I don’t know….but I like it. by Kristie Michele Art

Backstory: I created this image using my iPhone 8plus, and the Slowshutter app. set on a 10 second timer. I was listening to music, to get the movement of my body, and this was the photo that was created. I used the Lightroom Mobile app to fine tune the image, and layered filter to get the pinkish tones.
These type of images are among my top favorite to create. I love the ghostly and mysterious vibes they give off. You never know what the camera will capture.

“Hypnotic taking over me” by Paul Yan

Backstory: The traces of our lives’ paths, reaching far back to our childhood, intertwine to form the structure of our sub-consciousness. They all buoy to the surface when we’re in a state of hypnosis.

This image is a composite of 2 photos, only overlapping around the walking man, done in Snapseed with minimal local dodging-and-burning.l. 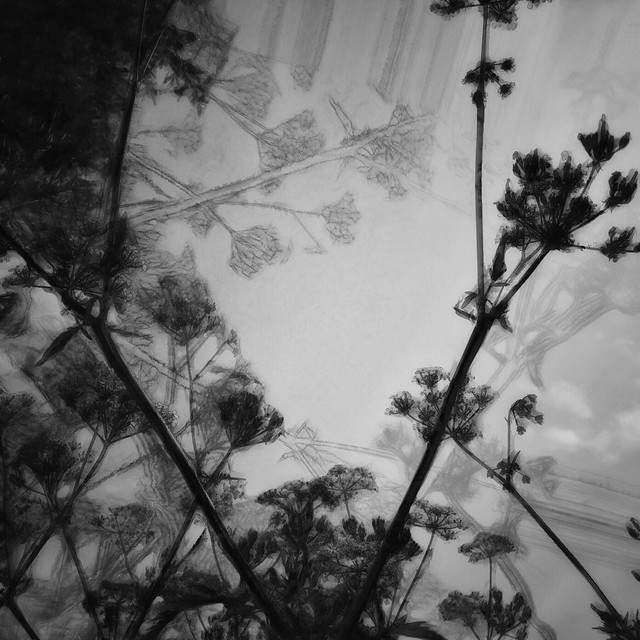 Flowers in spring by Laila Bakker
App used: Icolorama and Snapseed
Backstory: Wild spring flowers on the side of the road on a sunny afternoon. I could not resist and took a picture with my iPhone 6. I edited the picture with Icoloroma sketch and used Snapseed for black and white and the atmosphere. 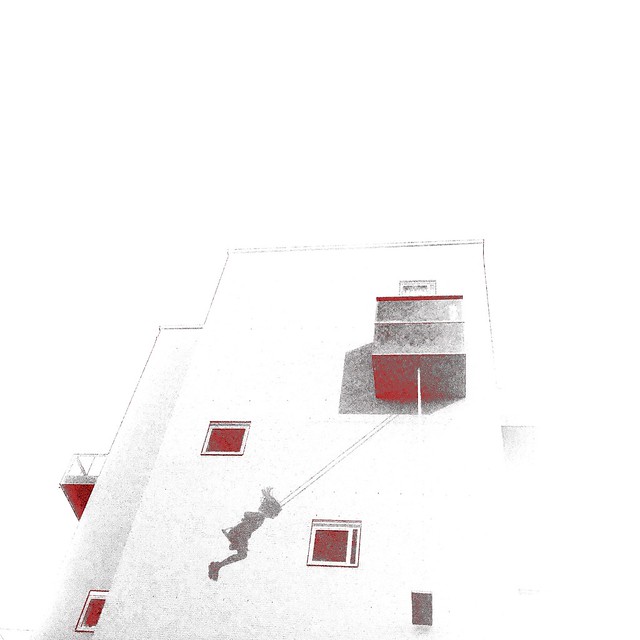 App used: iPhone 6, Camera+, SimplyB&W, Fotor free
Backstory: I wanted to do this shot for some time, in better conditions. The idea here was to do a backlight silhouette-shot of the flat and emphasise the clouds. When I did some black and white conversions using different filters, I didn’t like the results. But I noticed that the facade painting of the girl on the swing became visible. So I went into heavy overexposing and did even more overexposing in Fotor free, increasing the brightness to the max. I cropped clean to square, finally adding a touch of colour and the red seemed to work nicely. The endresult couldn’t be more different from the original shot. (iPhone 6, Camera+, SimplyB&W, Fotor free)

wicked tulips by jeremy cassell
Apps used: Taken with iPhone 6s Plus, rear camera and edited with Snapseed.
Backstory: While walking around Wicked Tulips Farm in Johnston, RI I came upon these tulips. The rain looked particularly beautiful on the tulips. My girlfriend and I were ready to leave and I bent down and snapped a few shots at ground level. I love how bold and beautiful the tulips look!

ode to you by jeremy cassell
Apps used: Taken with iPhone 6s Plus, rear camera and edited with Snapseed.
Backstory: I was at Wicked Tulip Farm in Johnston,RI and it was a rainy day. My girlfriend, Janine Graf showed me how I could use the volume button as a shutter release. I love how the iPhone allows you to see the world from another view. For this image, I used the Grunge setting on Snapseed to give the photo it’s final look. I love using Snapseed! 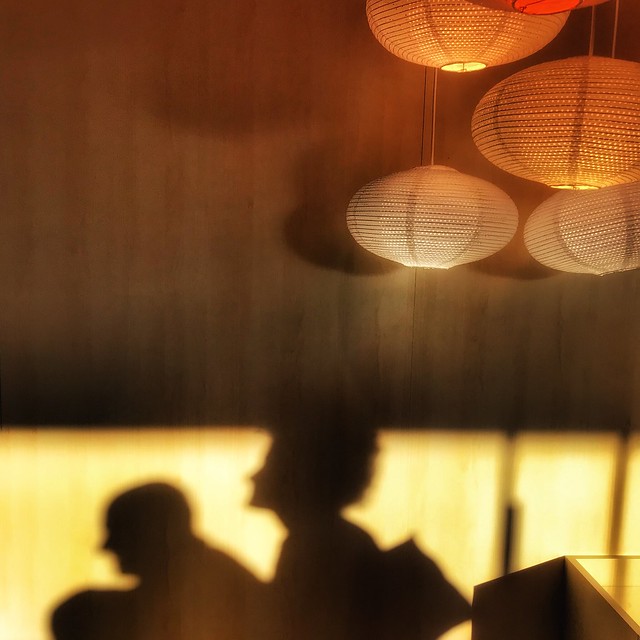 Apps used: I shot with the default camera app on an iPhone 7plus and edited in Snapseed.
Backstory: I took this photo at an IKEA store. The lanterns were on display, the golden light was provided by the later afternoon sun, all I had to do was wait for people to pass by behind me. I needed quite a few takes before getting this one with two full profiles and a square bag matching the cabinet on the right.

Apps used: Photo taken with iPhone XS using Focos.RNI Preset Agfacolor 40s  Backstory: This image was taken at a local park on a very overcast day in early May.   I stationed myself along a path near a lake to shoot the dogwood blossoms that were extending their ivory leaves toward the pallid lake.  I saw a man approaching, who seem quite lost in thought, and a symbol for “aloneness”.  I waited until he passed the point where I was shooting and had entered the compositional space I needed.  I post processed the image in a low key, vintage color scheme.  I used RNI films Agfacolor 40s because it seem to add just the right touch to the man’s melancholy while still capturing the blossoming whiteness of the Spring dogwoods.  I used the Focos app to get the bokeh and control over depth of field that I wished. I chose the 16:9 image format. I shot the image with an iPhone XS Max.

Cemetery Fence on a Spring Morning by David DeNagel

Apps used: Photo taken with iPhone XS using Focos.RNI Preset ‘Kodak Gold 200
Backstory: Shot at the end of April, I still had a sort of Easter spell still upon me.  The location was a cemetery which was very old and was really no more than a couple of small plots; the kind you frequently find in rural or rustic areas; untended, and frequently overlooked yet truly gifted with simplicity and understatement.  I chose the fence surrounding the main plot as my foreground element with tombstones and the surrounding country as my backdrop.  To heighten the “unreality” of the the very real materialistic components of the scene ,I shot with an emphasis on the bokeh,around and beyond ,the individual fence pickets which were fashioned from wrought iron, now weather beaten and
malformed.  I shot the image with an iPhone XS max. I used the Focos app to control the depth of field.  I chose the RNI film Preset ‘ Kodak Gold 200’ for coloration; I thought this my imbue the scene with a touch of Spring and, at the very least, some warm recognition of the humanity, good and bad, that lied buried here within this perimeter of rusting iron.

Apps used and Backstory: This flower was shot with my Iphone6s Camera+ lens with Macro enabled in natural light. I first processed the image in Metabrush app for a painterly effect, then later in Icolorama using a soft watercolor effect. I liked the contrast and texture of the yellow flower center so I used LightBrush app to bring that out. I also used that app to bring out some of the edges of the petals. 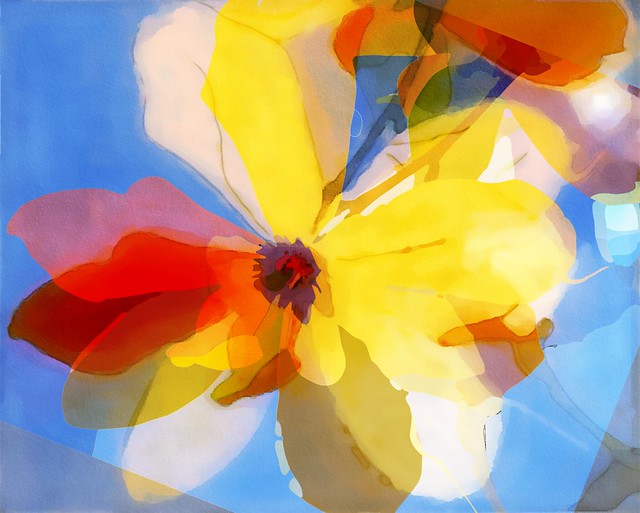 It’s May by Barbara Braman
Apps used: I used Imaengine and Procreate to simplify an image I took of a Magnolia flower. I then used Procreate to change the colors of the flower. I then used iColorama for the watercolor effect and to add dimension to the image.
Backstory: The back story is the arrival of spring. A friend of mine gave me a branch from his magnolia tree and I had the pleasure of photographing it as it emerged. Simplifying the image and playing with the color allowed me to further express my joy at finally seeing spring and sunshine! 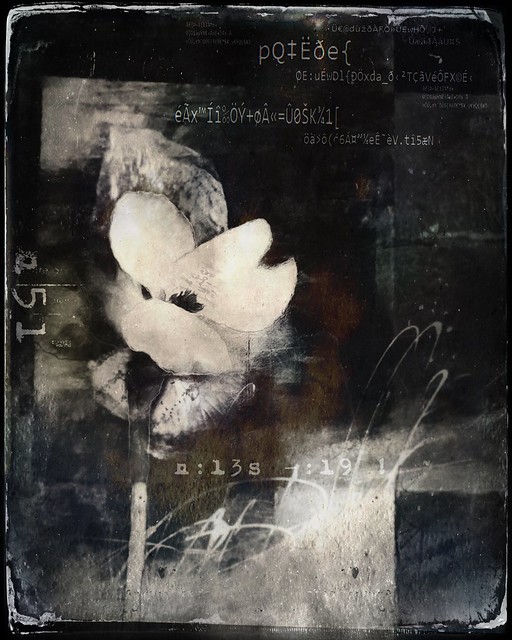 Apps used and Backstory: A pansy from my yard edited on the iPad using a variety of apps. Working on some new things. Art Studio Pro, TinType, LightBrush. 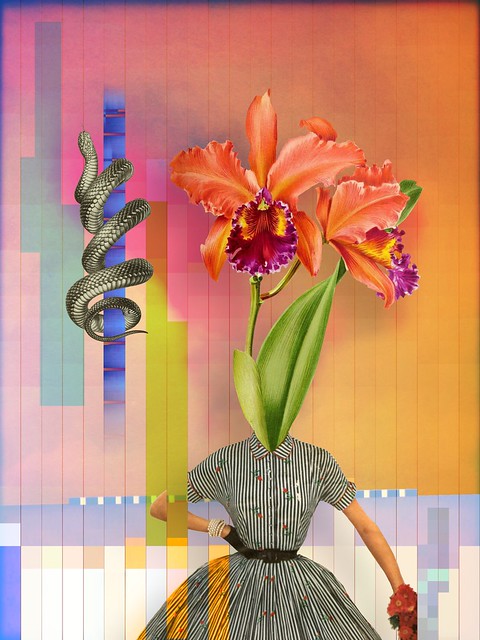 Apps used and Backstory: This image evolved from a playful dalliance on the street called Surreal where I often wander when I haven’t been able to do much actual shooting and need a creative spark. That, and recent release of more than two million images into the public domain by the Getty Research Institute and the Biodiversity Heritage Library. When I discovered the image dump I spent nearly 10 hours culling and collecting images that I could use to build surreal stories like this one. The image is untitled, but if I were to give it a title it would contain the word ‘mashup’ at one end or the other. Really, this was a playful exercise combining unusual elements – unsettling for some (even got some criticism) – appropriately serious for others, and perfectly whimsical for still others.

Everything was composited in SuperimposeX. The background is a combination of two older images, both derived out of sessions in iColorama, Snapseed, and Mextures. The graphic elements were masked using Eraser, then further masked using tools in SuperimposeX. I took the final image into Formulas (while I still can…) and applied a finishing filter set. 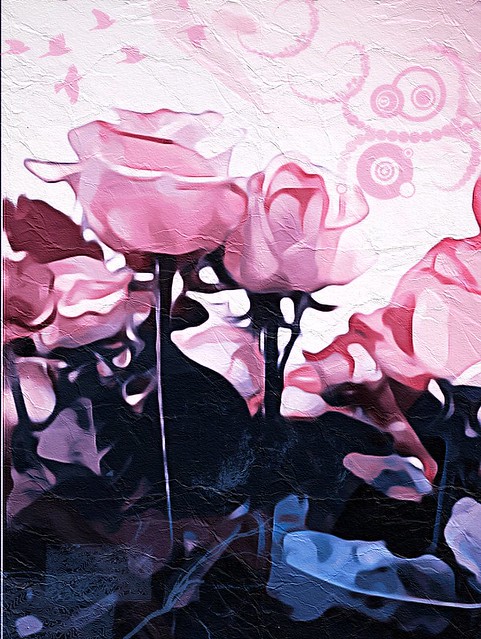 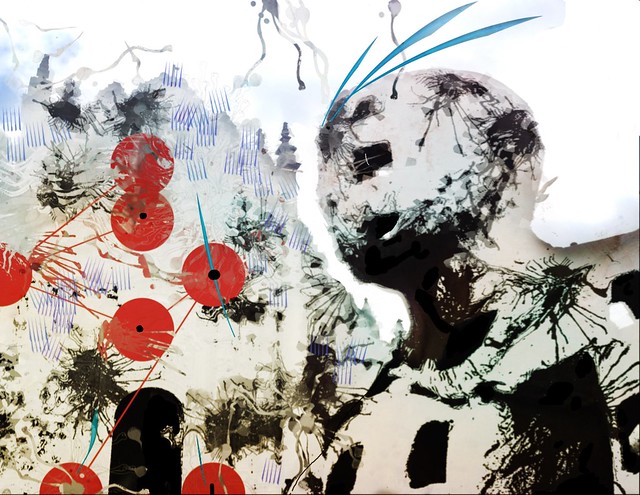 civilising frenzy by Jorge Daniel Segura
Apps used: edited in iColorama and picsart
Backstory: This is originally a B&W photo i took of a statue reminiscent of a helmet alongside the Mexico City Cathedral, which was part of a temporary exhibition. First I planned to use it in a photo series about the Spanish conquer of the Mexica Empire. But when I began to play with it in iColorama it occurred to me that it could be used the opposite way, as if a Christian civilization is conquered by pagan warriors. In my eyes, that way the ‘conquest logic’ could be bared in all its absurdity as what really is: a macho arrogance display, no matter where it comes from.
The red details were added in iColorama, and the blue ones in PicsArt.