I don’t often care for single-button “effect” images, particularly painterly images. To me, those don’t evidence a lot of creative decision making and thought, and just as often, I think I’d prefer the original image. But occasionally an image is posted that clearly represents a truly “painted” representation of a photographic study, where it’s clear that the artist has taken pains to think though brush strokes, background adjustments for maximal subject positioning, and thoughtful and selective use of techniques and styles. This week’s lead artwork, Carolyn Hall Young’s image “Bewitching” is just such a spectacular accomplishment, one that could have been produced by her with a brush in traditional media. 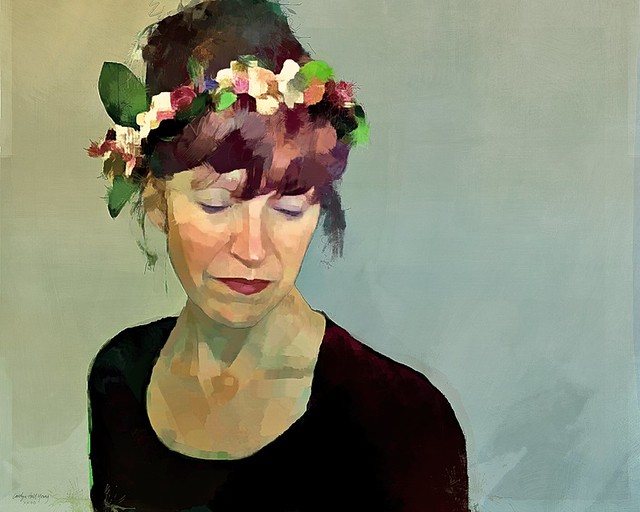 Apps used: This is an iPad painting, made with a beta version of iColorama. I used two of Robin’s images, as sources to make this.

In iColorama, I started with Brush>Paint, and blocked it out, as an underpainting, then Brush>Rebound, and some of the flat brush, in Bristle, some Shatter, and some Explode. There is some Lineal in the background. I did a significant amount of work with the color, with a number of brush masks. I make the textures, and keep them on hand.

Backstory: I often use borrowed or found images, and remixing them into a new story, in a different context. Robin had posted a wonderful self portrait, and another photograph she had taken of a model wearing a crown of flowers. These inspired me to make a birthday portrait for her.

For me, Robin’s thoughtful pose called for a mellower, calmer background, than existed in the source image. The original had blue shuttered doors and a sort of tropical feel. The color tone was edgier.

I painted it in a romantic, vintage style, working the foreground and background textures and colors until I felt a peaceful harmony came together.

The crown of flowers, came next. I brought this in first, as a photographic layer, masking and blending them, then I painted them to fit the style and color of what I had already done.
The crown, combined with the quietness in the body language, suggested, to me, a goddess, a wood nymph.

I chose to do a more planar type of brushwork on the figure. For me, a smoother, slicker style would have been too saccharine, and would have taken away from the earthiness I wanted for this.

This is simpler, which does not mean easier, than what I often do. While I was working on this painting, I heard some sad news, and came to peace with it. You could say that I was painting this as comfort food for my own soul. I hope others find serenity in it, too. 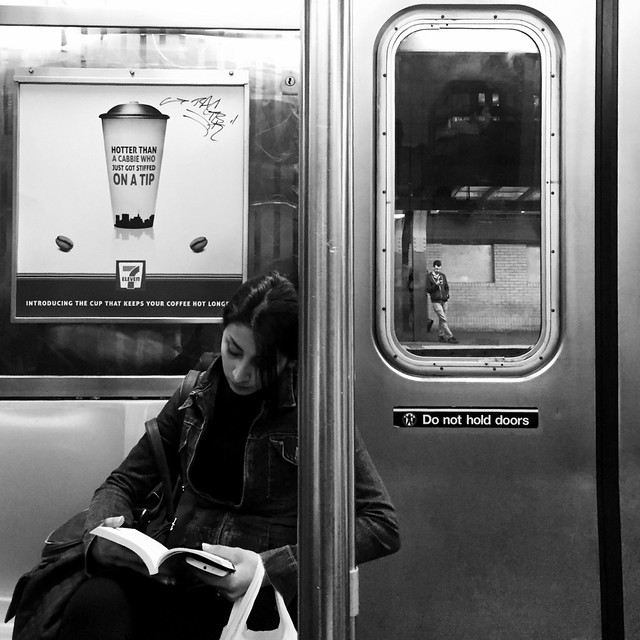 Backstory: I had been riding a few stops across from this woman absorbed in her book, leisurely trying to find a frame and an interesting shot. We pulled into an outdoor station and stopped with this image right in front of me, the man across the platform framed perfectly by the window. Luck certainly plays a part! 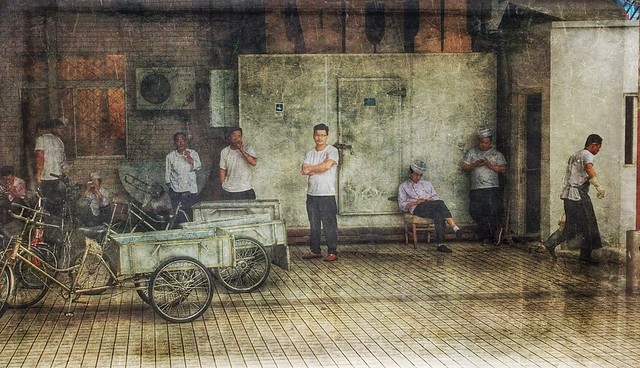 On the edge by Tomaso Belloni

Apps used: I took the photo on an iPhone6 with the default camera and edited it with snapseed for basic editing plus cropping and stackables for the texture. I could not “zoom with my feet” because it would have meant getting completely soaked, so I had to crop significantly. I re-sampled the picture with Big Photo before applying the texture. Part of the texture is from stackables, part is real rain.

Backstory: I was at a work meeting in Beijing and went with colleagues for lunch to the restaurant next door. When we came out, it was raining cats and dogs and in front of the entrance there were these restaurant employees taking a break in a perfect setting. I immediately saw the shot and my phone is always in my pocket.

Apps used: I used the Pro HDR app on an iPhone 5.

Backstory: I’m not a fan of obvious HDR images but I thought using it here would help deal with the strong contrast between the darkness of the room and the brightness of outside. The result was a rather hazy, diffuse effect which wasn’t exactly what I had planned but I liked the mood it created.

Apps used: For this particular image, I used CAMERA+ self timer on my iPhone for the shot. I then processed it in VSCOcam using the 03/Legacy preset to get the black and white I wanted. My next step was SNAPSEED, to get the blur and center focus. My final process was taking it into MEXTURES, for the multiple layers of texture.

Backstory: When this image was taken, I was feeling very overwhelmed with everything going on in life. I tend to try and capture my emotions in photographs when they are at all different levels of highs and lows. I want to make the viewers feel, and it is also a form of therapy for me. 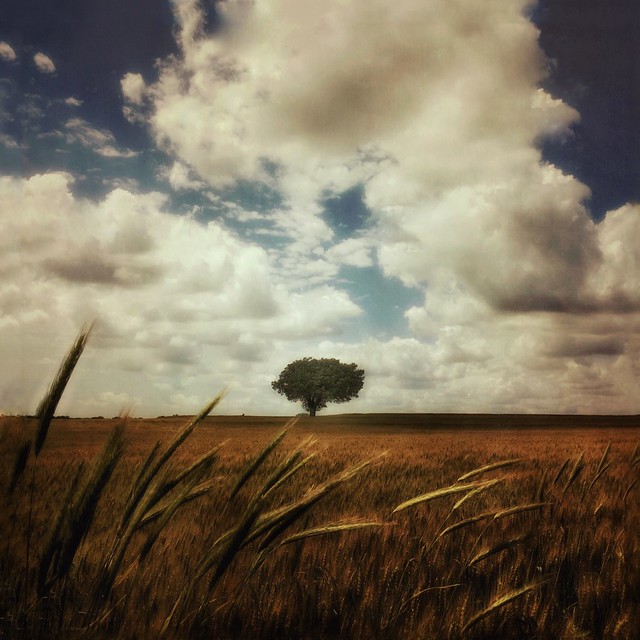 Backstory: This was taken just west of my home in Wichita, Kansas. The wheat here seems to change from green to gold overnight in the late spring. That’s when this was taken.

Apps used: Workflow –
1. I ran a blank image through Tangentapp for the circle in the background.

2. Using Matterapp, I added the geometric shapes and blended them with the circle image. The “shadow” feature was turned off, and opacity and color were adjusted as needed.

3. Unionapp was used to impose the figure over the geometric shapes and correct some small details I missed in the previous blending(s).

4. I then ran the image through iColorama, using the “brush” feature/group brush style “DryTwo” for the illustrated effect.

5. The final image is processed in Mextures. I added various percentages of grit/grain, emulsion and grunge, along with the PX-680 Warm filter and strong sharpening. My original formula code is DRKGRMQ.

Backstory: This image is me simply showing my love for graphic art, illustration, and science fiction. 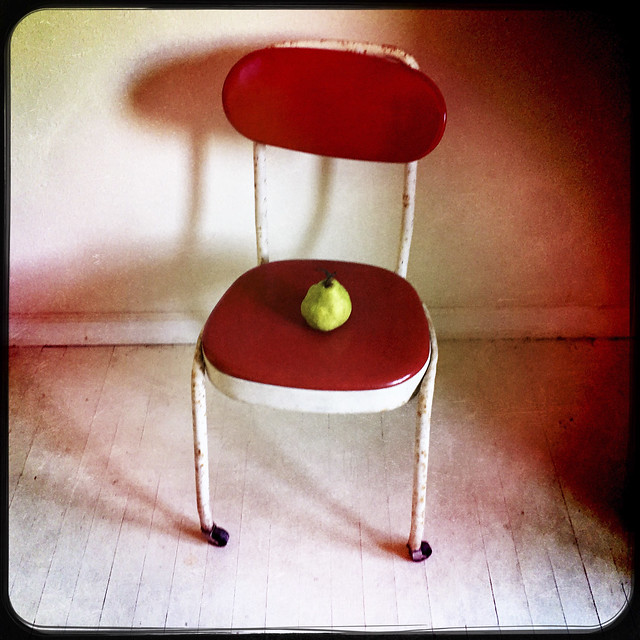 Backstory: I own this little chair, and always use it for taking test shots because it’s right in my office, and I think ‘she’ is very photogenic, with her little wheels on her feet, turned shyly inward. I added the pear because I loved the contrasting colors. This shot was a surprise, because I was testing a new Hipstamatic ‘lens’ with every ‘film’ they make, and this happened with a ‘film’ I would otherwise never have used, called ‘Lucifer’. So, happy accident. 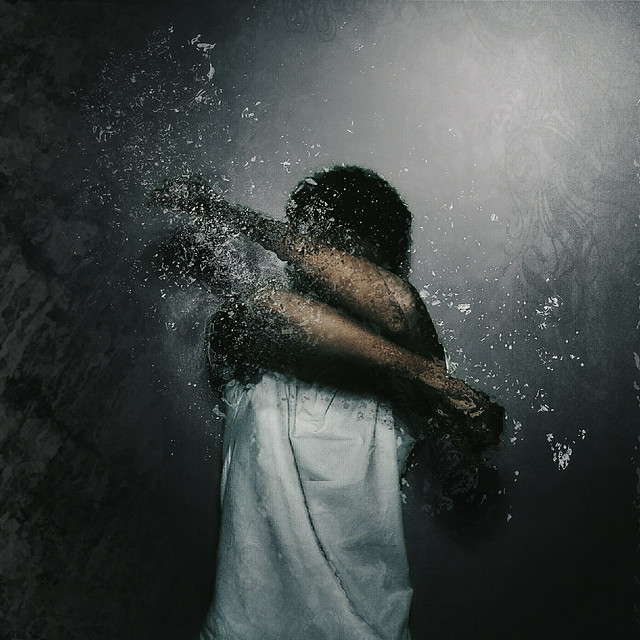 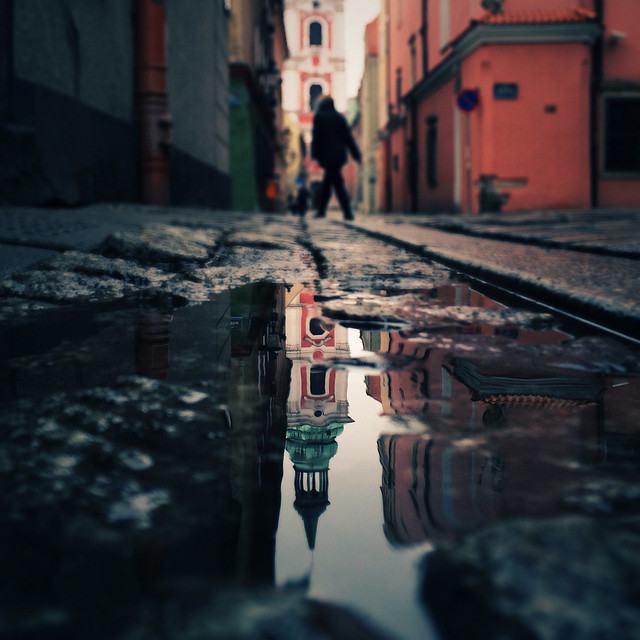 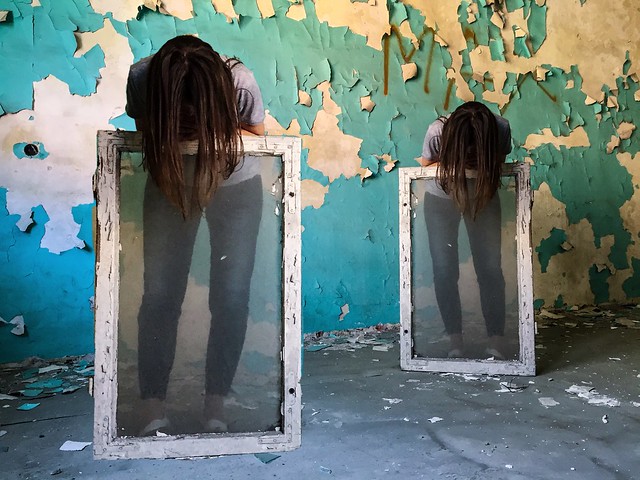